Hackney is an interesting part of town.  It has fascinating residents. 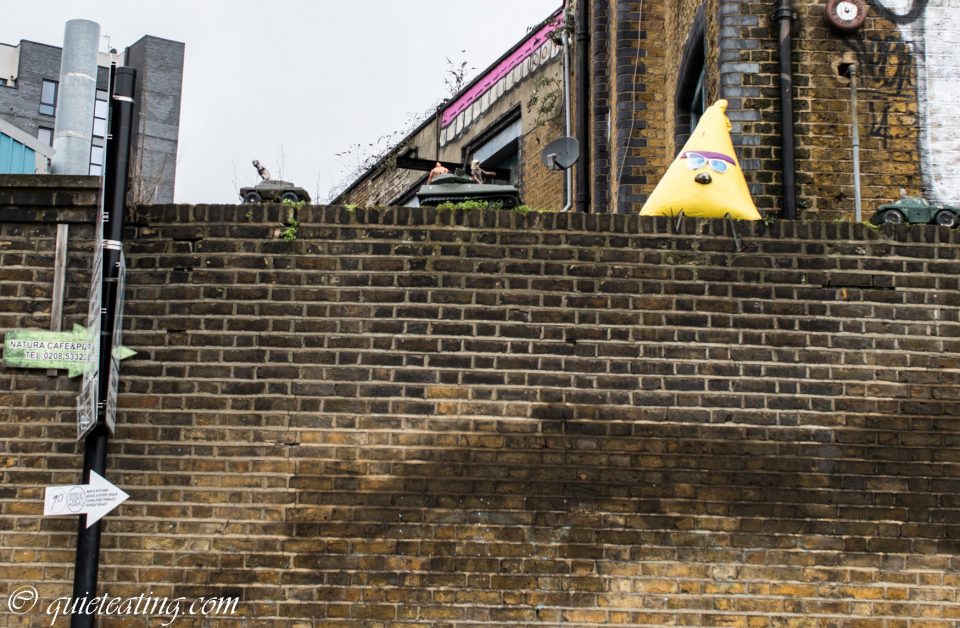 Left to right, armoured car, followed by tank and thirdly, happy yellow triangle with sunglasses.  Then the military procession continues with a fortified vehicle.

This is the district where Cornerstone has decided to make its home, an exciting part of town.  With the barb wire and spikes on walls, it would prove to be an exhilarating place at night when it was dark and cold.  Good thing I decided to visit on a Saturday lunch then. 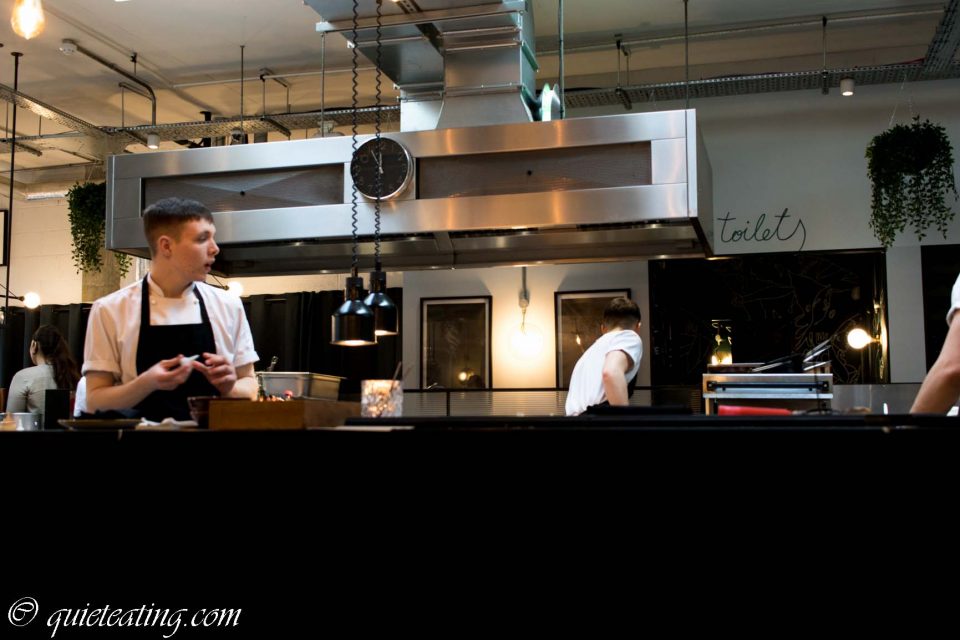 The dining room surrounds the open kitchen and the tables reflect a clean minimalist trend.  Which would reflect the food to be had.  Unfussy presentation but great utility.  Here I mean that it provides a worthwhile return per chew. 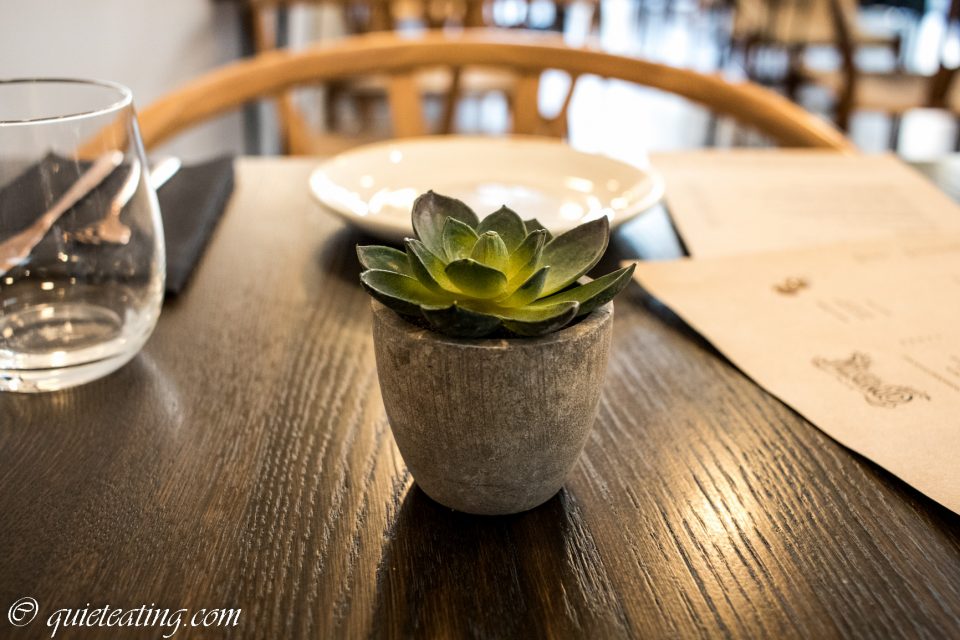 A decorative little plant.  As my eating companion was 30 minutes late, I decided to spend my time talking to this shrubbery.  One of the waitresses, sensing my lack of companionship came round to distract me with chat while the restaurant was only just starting to fill up.  She was quite convincing as she did manage to talk me round to the tasting menu.  I was glad that she did. 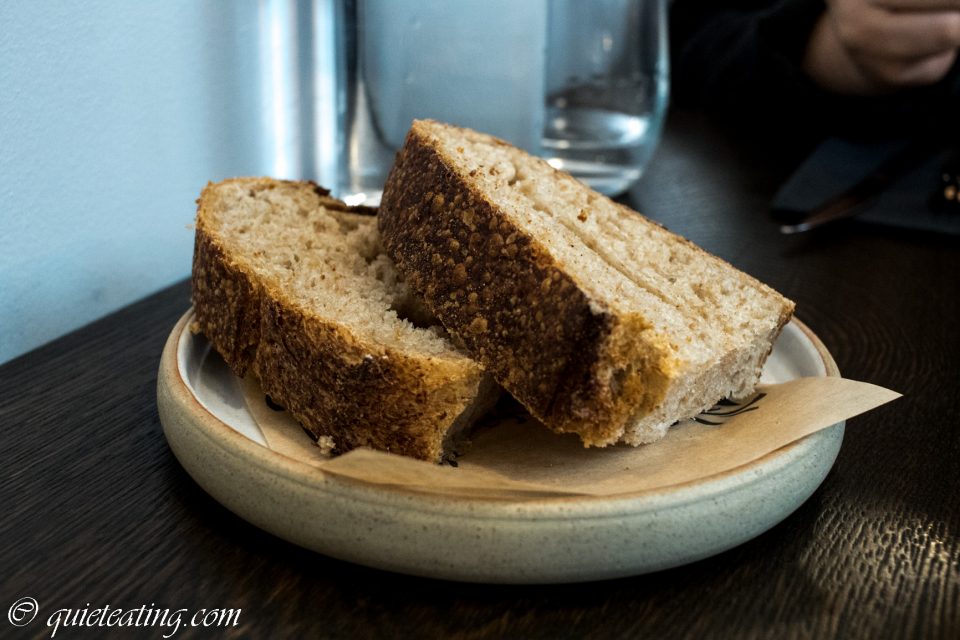 Bread.  When my companion arrived, it was off for a later start than expected.  Then again, allusions to politics aside, better late than never. 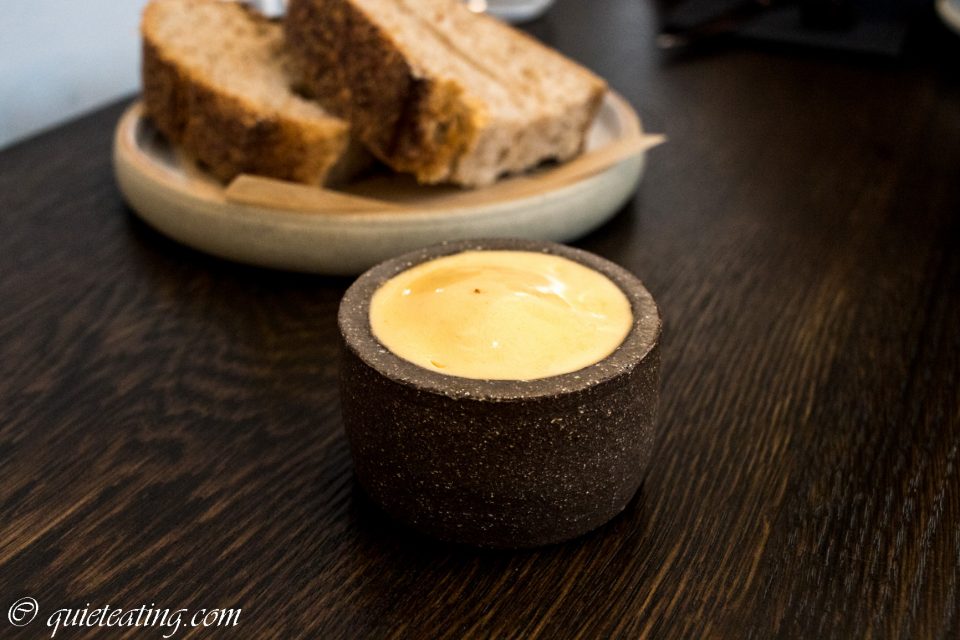 Miso butter.  It has been a while since I have had good bread.  It seems that with the end of the year approaching, bakers in restaurants I had visited maybe lacked the motivation to make something great.  With the new year though, at least at Cornerstone, they have come roaring out of the blocks.  The bread was bouncy, light and with a beautiful spectrum of textures.  From the crunchy exterior, to the trampoline interior with soft insides just begging for the butter, this was a welcome start to the new year.  So much so, that I had to have seconds. 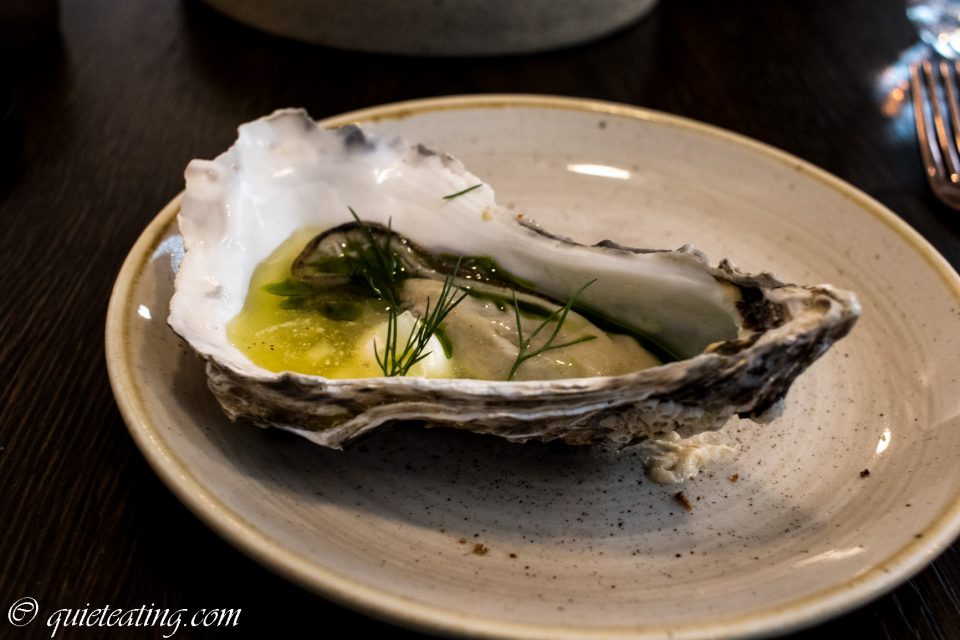 Pickled Oyster, Celery, Horseradish, Dill.  As the start of the meal, which had otherwise been too long coming, this was served in its shell.  Yet, this was not raw and so avoided that sliminess that I try to avoid.  Instead this was pickled and smooth with clean sauce, it was a good introduction to the food. 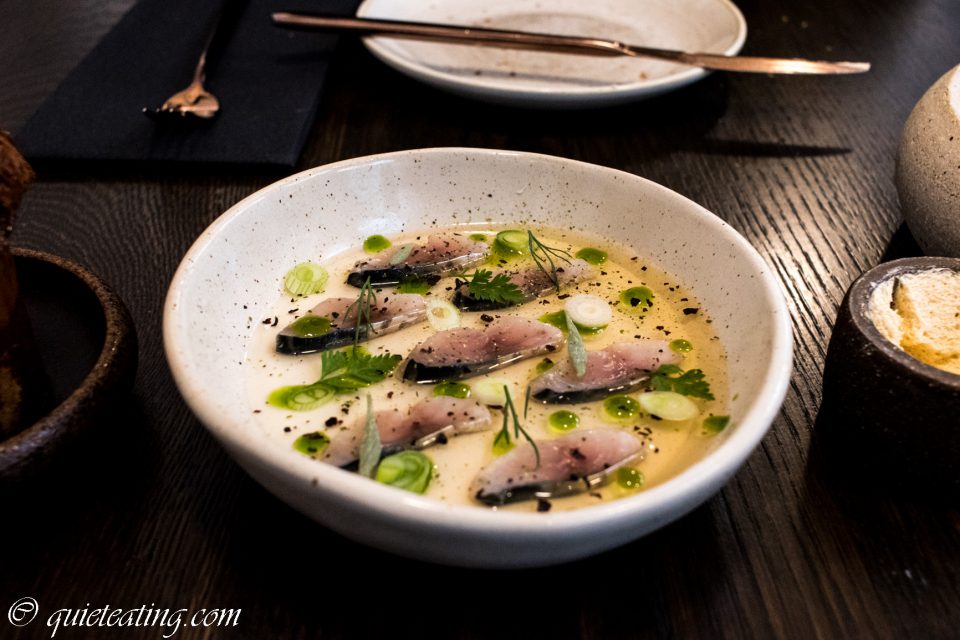 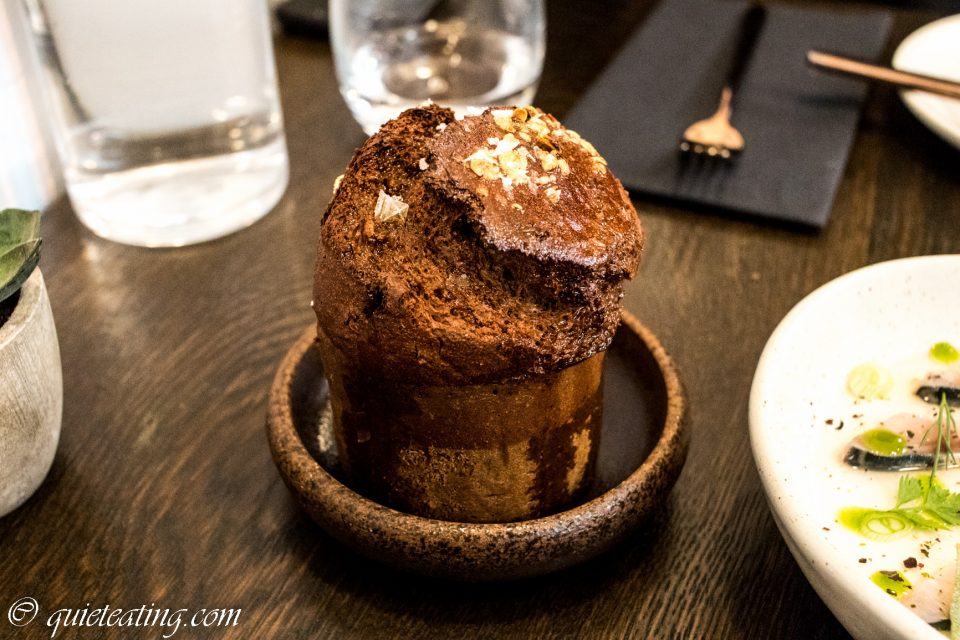 Treacle Bread.  An outstanding bread.  When had with the pate, this was the exceptional dish of the day.  The pate was uncommonly smooth, loaded with mackerel flavour (without the saltiness or fishiness that often seems to be the case) and the bread, oh the bread.  A delicate dollop of honey, a fish seasoned just so and a crispy crust, I think I was in heaven.  Outstanding. 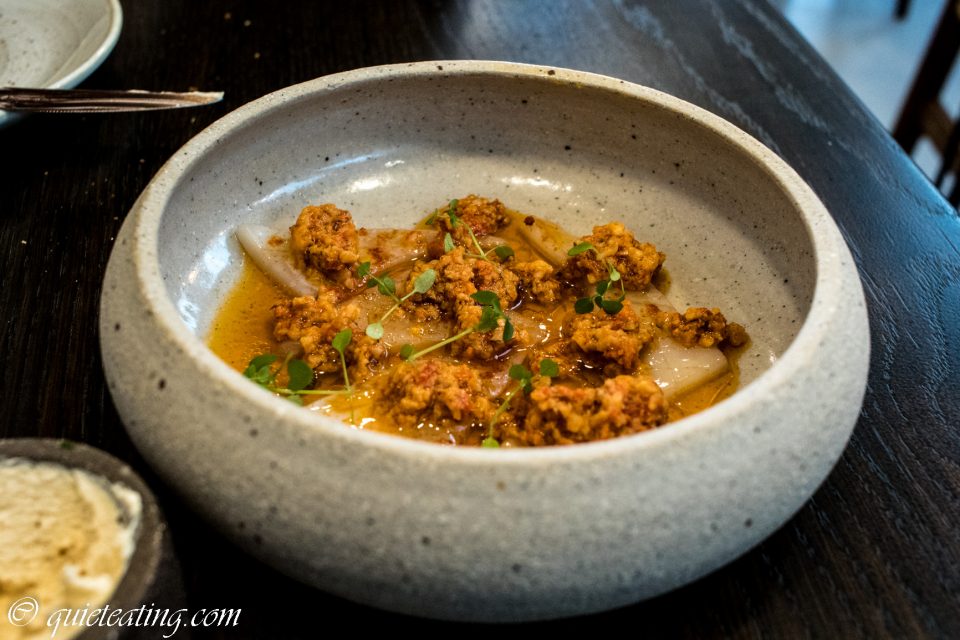 Marinated Squid, Romesco Sauce, Smoked Paprika.  The uncooked squid retained its rubberiness.  However, the Romesco sauce made me forget about that and instead congratulate the staff in creating such an interesting base.  The chewiness of the squid gave body to the lighter mixture allowing it to be savoured for a while. 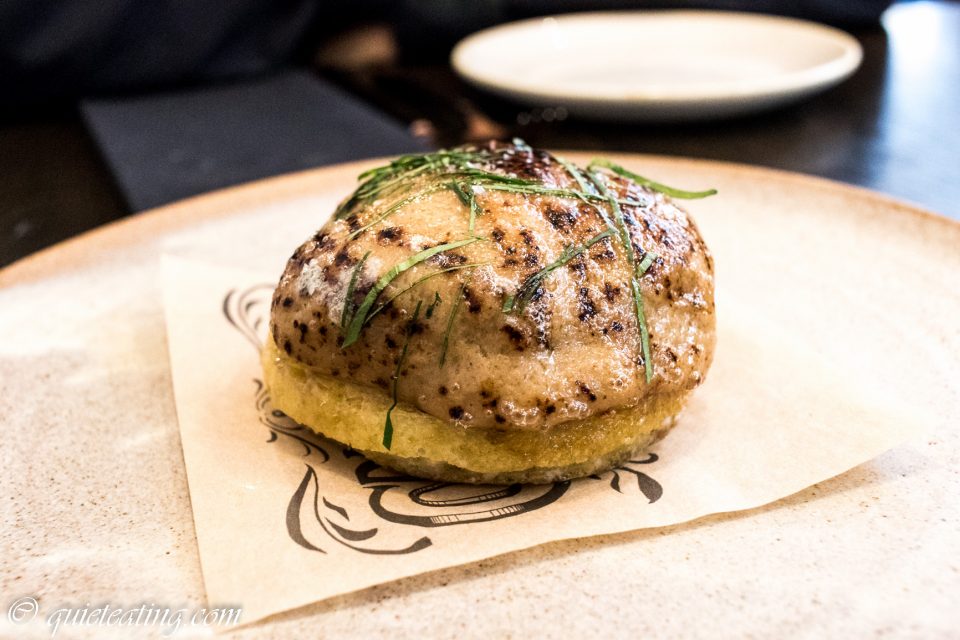 Crab Crumpet, Rarebit, Worcestershire Sauce.  This was an interesting mix.  Crumpet and crab.  The two Cs mixed excellently with fulsome crab, melting cheese and dainty crumpet set off with a hint of Worcestershire sauce.  The crab itself delivered a heady rush of meat without having to go through the labourous process of taking out the pincers.  If only all such pleasures could be had with so little work. 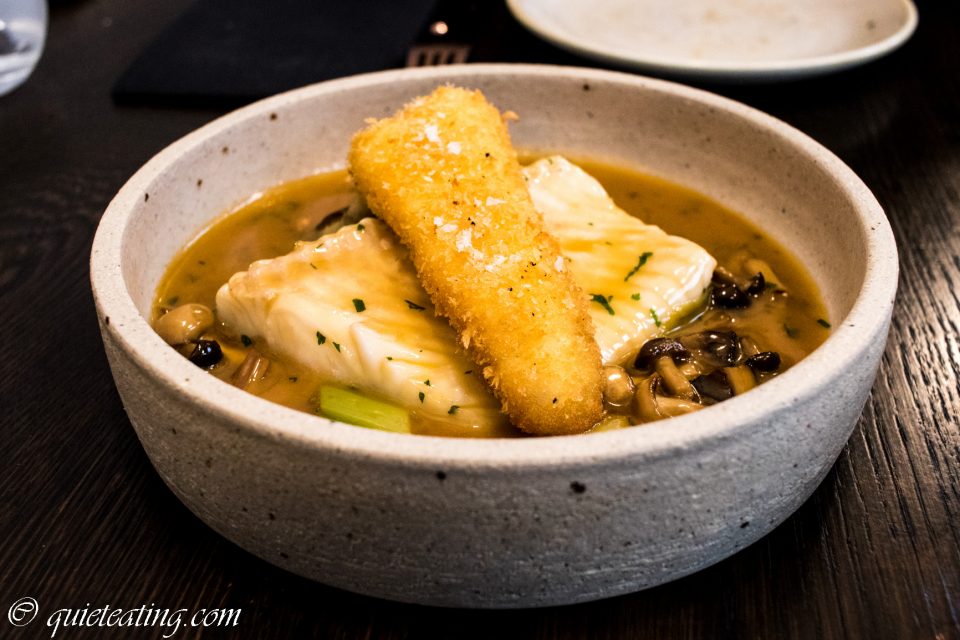 Plaice, Roast Chicken Butter Sauce, Mushrooms, Leeks.  Plaice fillet and fried plaice belly.  The fillet was, and I’ll say it here because I can’t think of a better descriptor, perfect.  Just the right side of cooked, it was moist, succulent and a delight.  Yet, inside the battered belly, things were even better with to top things off.  Flaky and almost overwhelmingly powerful, for an instant I was transported out of the restaurant to other places I used to know. 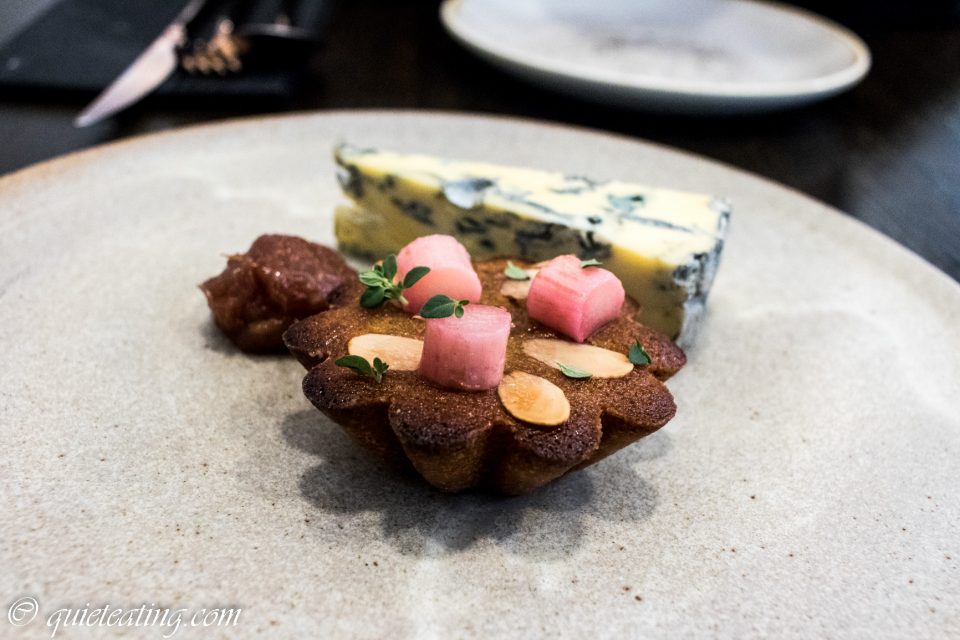 Yorkshire Blue, Rhubarb Chutney, Almond Cake.  With the seafood finished, I wondered what surprises were in store for dessert.  A very interesting combination with buttery cheese and delicate cake.  Despite its strength, the cheese was carefully balanced to not overpower the cake.  Instead, they complemented each other (unfortunately I can’t say that of some countries at the moment). 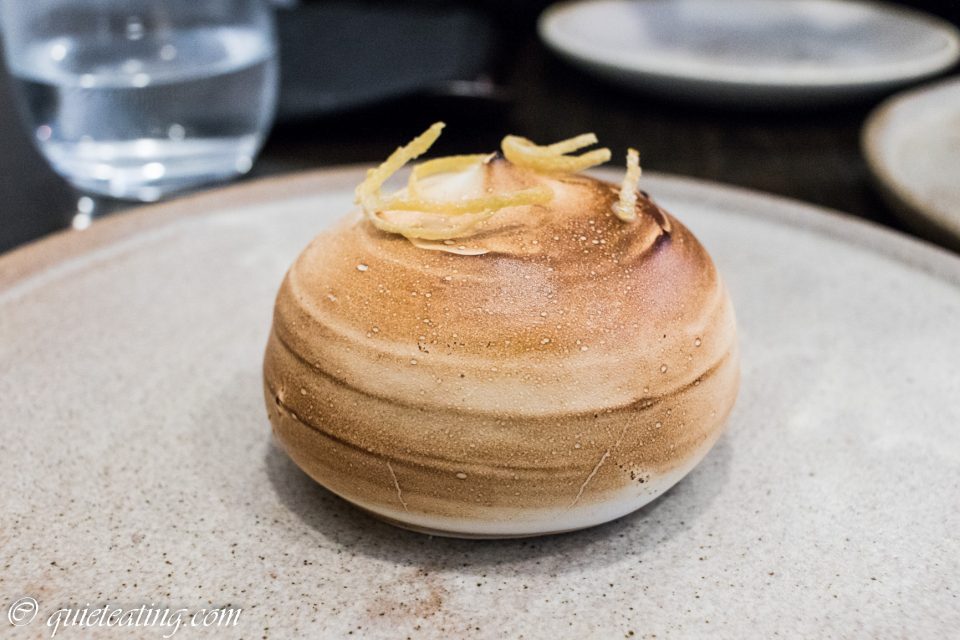 Lemon Meringue Pavlova.  It looked so delicate that it almost seemed to yearn to be smashed.

The tart, sweet, crunchy, soft and pretty dessert delighted many of the senses.  Gone too fast. 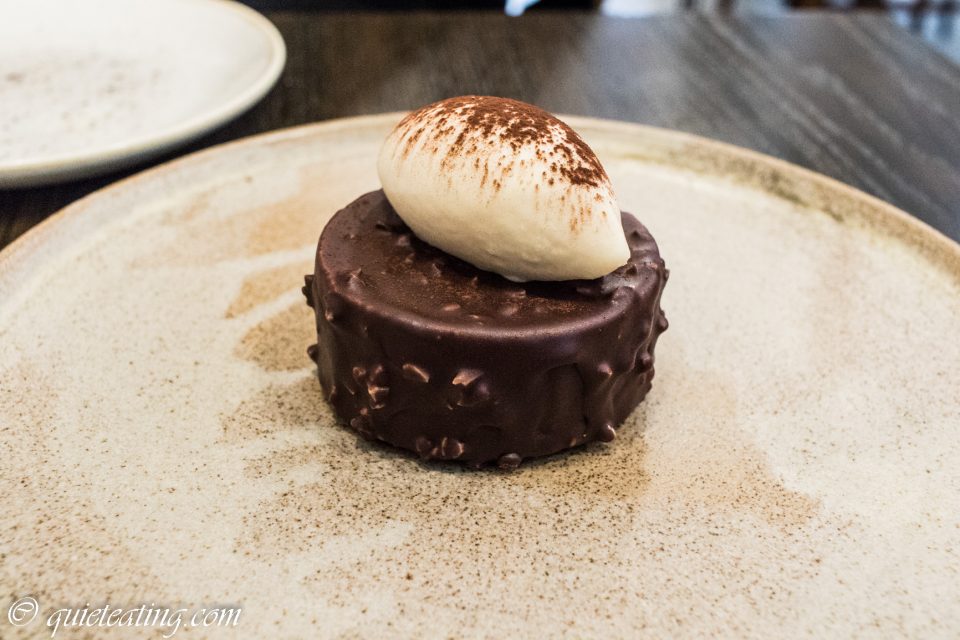 Chocolate, Amaretto Ice Cream, Coffee.  This little extra was not part of the tasting menu.  Instead, this was by way of apology by the waitress who was sweet talking me into this meal under false pretences.  Actually, she was using the price for the weekdays.  However, I do have to applaud the restaurant for owning up to their mistake and trying to make amends.  Now, if only other louder people would have the courage to do the same.

Perhaps I should have known from the surroundings that something unusual was in store.  When you are out in a rather weird part of town, risque cooking doesn’t seem so bizarre anymore.  So why not mix treacle with bread, have cheese and cake or put a crab on a crumpet.  It might all end up rather swimmingly.  Or at least, you can sink with style.  So maybe that’s what Mr Triangle is for, an emergency flotation device.  However, he wasn’t needed in this case, as I left the restaurant and happily floated away on my own accord.