When people preface words with “da”, I cannot but help think back to my high school days where everyone would try to be a little “gangsta”.
In such times, the word would seem to make things that much more hip.  Strutting around school, prefacing many random things with such language, would get me looks.  Then again, I’ve gotten used to quizzical glances.  Reminds me of that day when I went skiing round for the day dressed up in a Pikachu onesie but let’s talk about more interesting things, such as these rather fascinating amuse bouches. 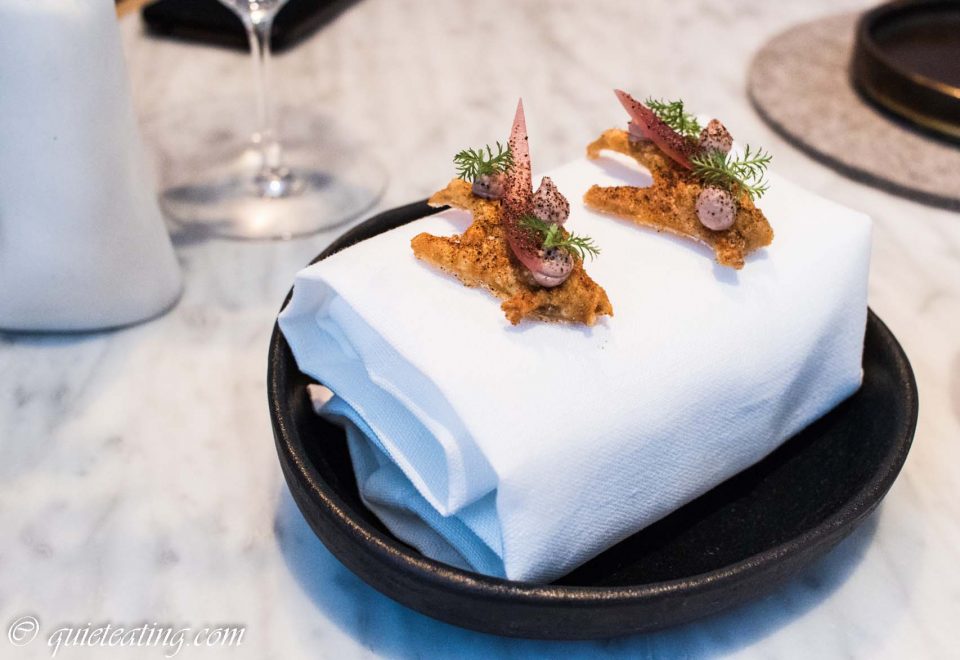 Chicken feet with chicken liver parfait.  A particularly delicate dish, it seemed that the chicken feet had been carefully deboned without disturbing their structural integrity.  Although I have eaten these before in the Chinese style, which is not for polite company as it requires spitting out of the bones, I did not take a particular fancy to those presented in the traditional style.  These however were a different story.  Crispy, spicy and rather winningly presented (so not requiring any tongue dexterity), my only regret was that they were gone so quickly. 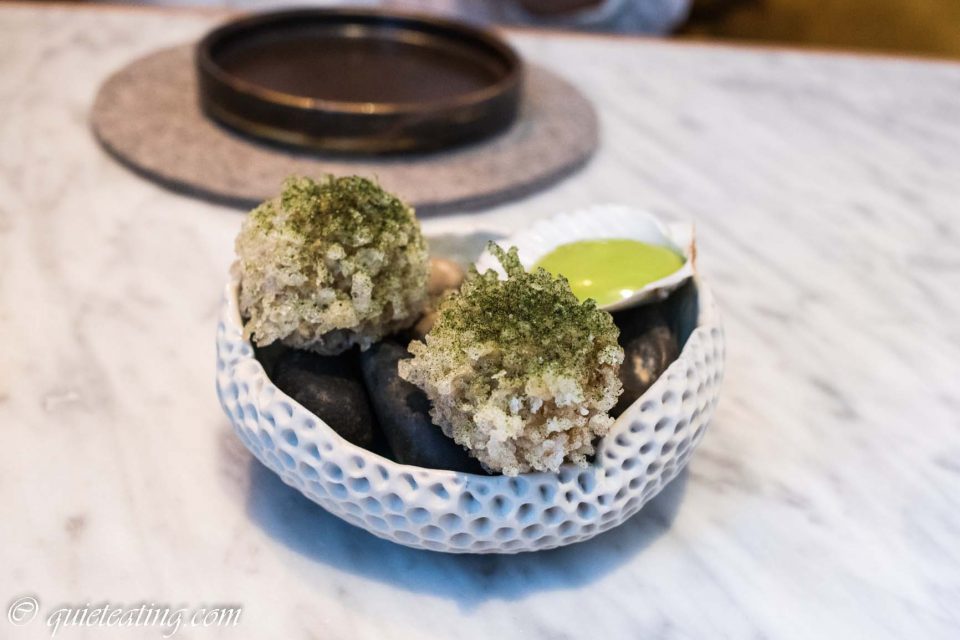 Cod cheek croquettes.  Another item of particular skill, carefully battered and dusted, these were delectable balls.  When thinking of such items, I used to dream of the examples in Barcelona.  Those were worth rowing your boat for but it seems that there is something of similar quality just where you can get to without traversing the dark wide channel.  Depth of flavour, carefully bread crumbed sea food exemplar, good thing that these were not on the menu.  Otherwise I would have ordered far too many. 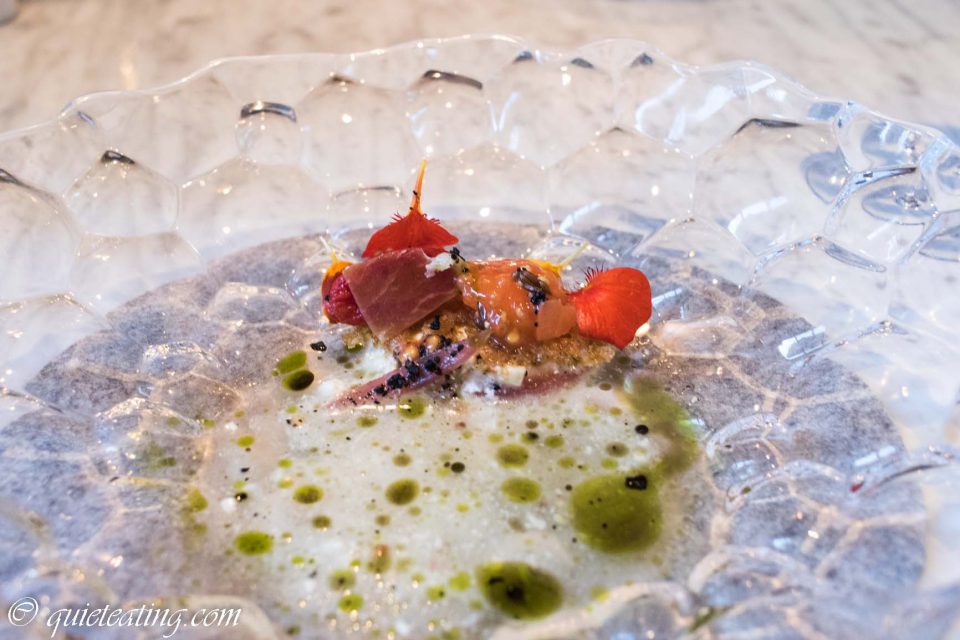 Cheese, tomato, speck and tomato water.  Unfortunately half eaten before a photo was taken.  The tomato was an example of how good  this dish could be.  In the way that only the best tomatoes prepared lovingly can be, it almost seemed like meat.  With the speck included to give a comparison, I can confirm that tomato can indeed become indistinguishable from its carnivorous counterpart. 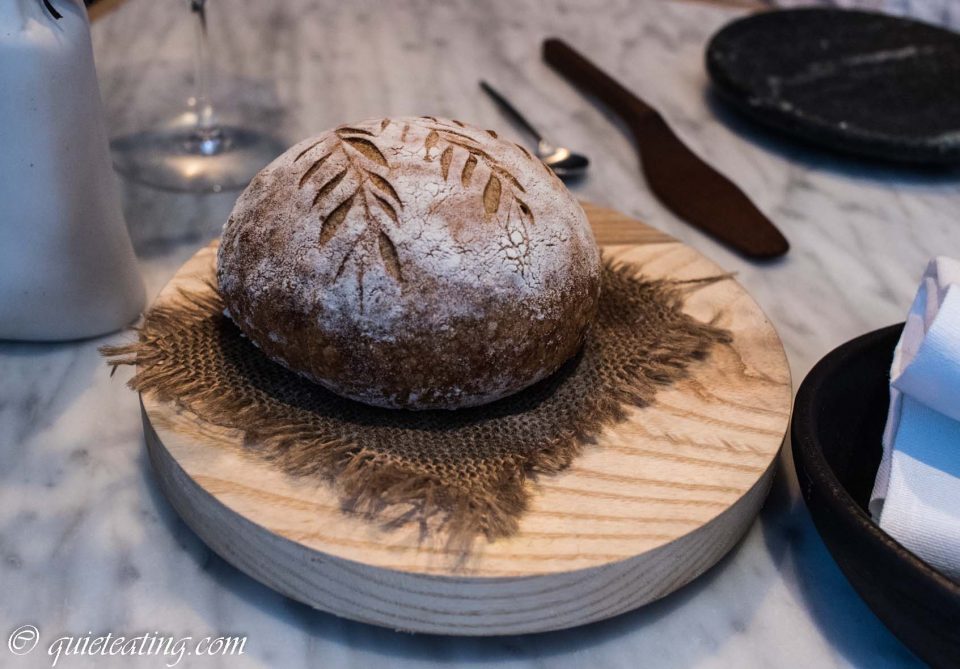 Sourdough bread.  The prettiest bread I had seen in recent memory. 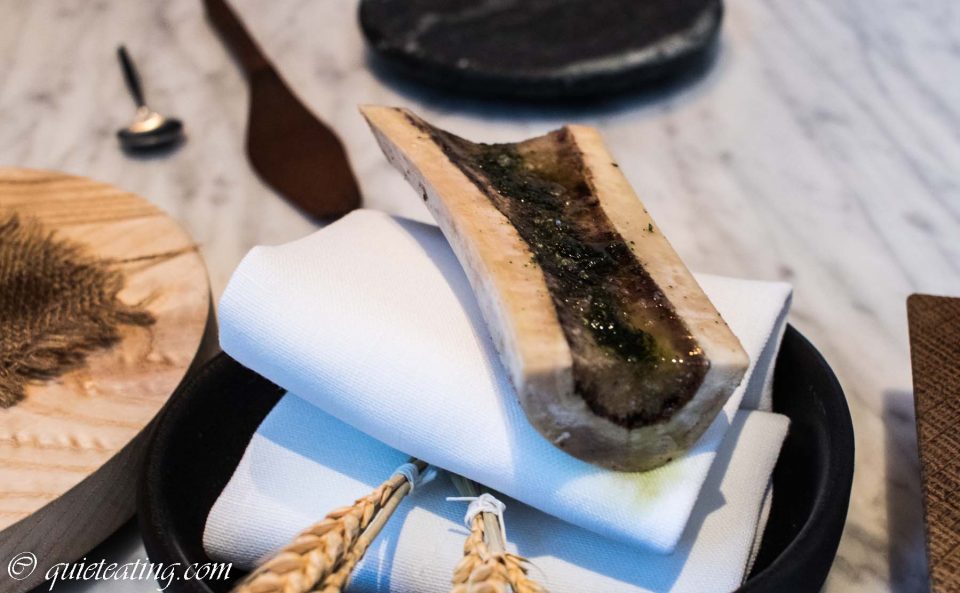 Bone marrow.  To slather on your bread. 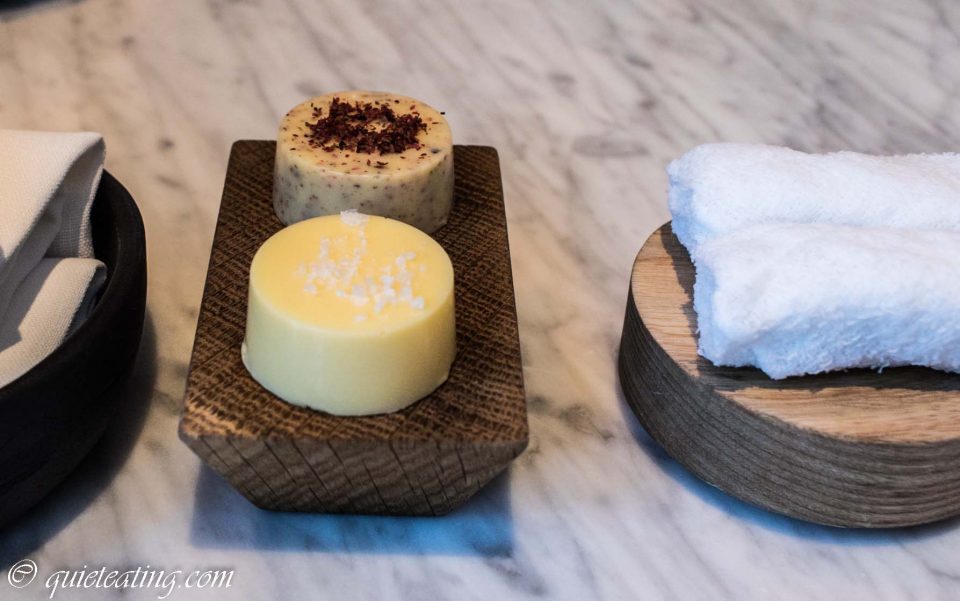 Sea salt and peppercorn butter.  To provide something a little more usual for topping the bread.  With the bone marrow, the butter or even by itself, this bread was superb.  Crunchy outer skin hiding succulent bouncy interior, set off with your choice of topping, this deserved its placing as a separate course in itself. 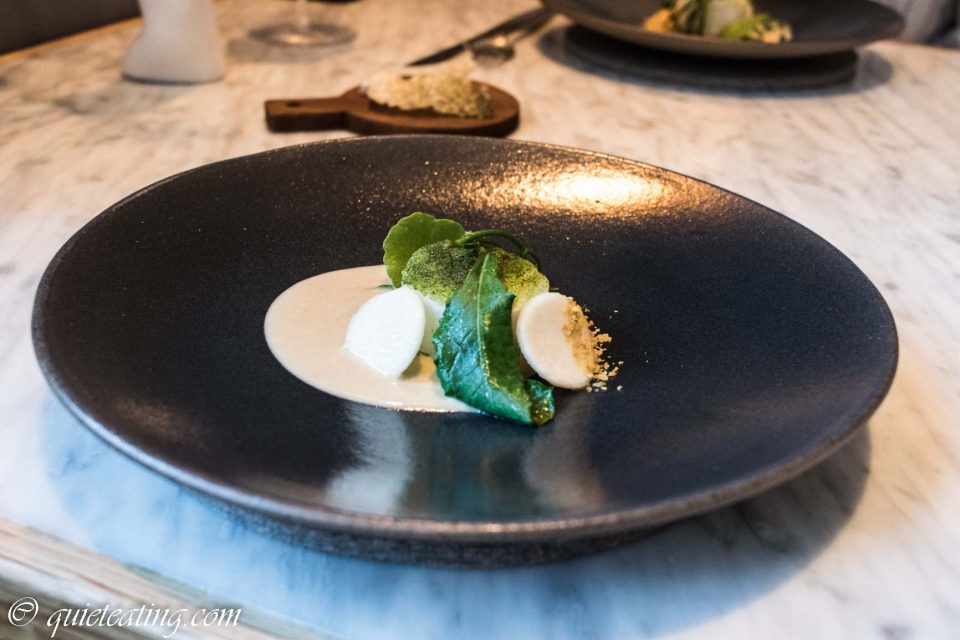 Cod with butter, garlic and smoked eel seaweed dusting and chicken skin crumble.  Here was where the rest of the cod ended up.  The lightly cooked cod, the eel and sauce were good but it was the chicken skin crumble which showed someone was paying attention to my inner child.  In days long gone (and also when I am in a juvenile mood), I would love to eat chicken skin on its own.  Yet even in such a state I have standards as not just any chicken skin will do but only if it is fried and crunchy.  Unfortunately, that was to be a fleeting pleasure when eating the rest of the flesh.
However, when I got a bit older and ended up in Japan, imagine my joy when I found that in yakitori joints, you can order chicken skin on a stick.  No need to go through the rest of the less exciting chicken.  At that time I thought I had arrived in foodie heaven.  When I left Japan, I thought I was saying goodbye to that treat.  Yet here in London, I again saw a glimpse of what the poultry promised land was like.  Excellent. 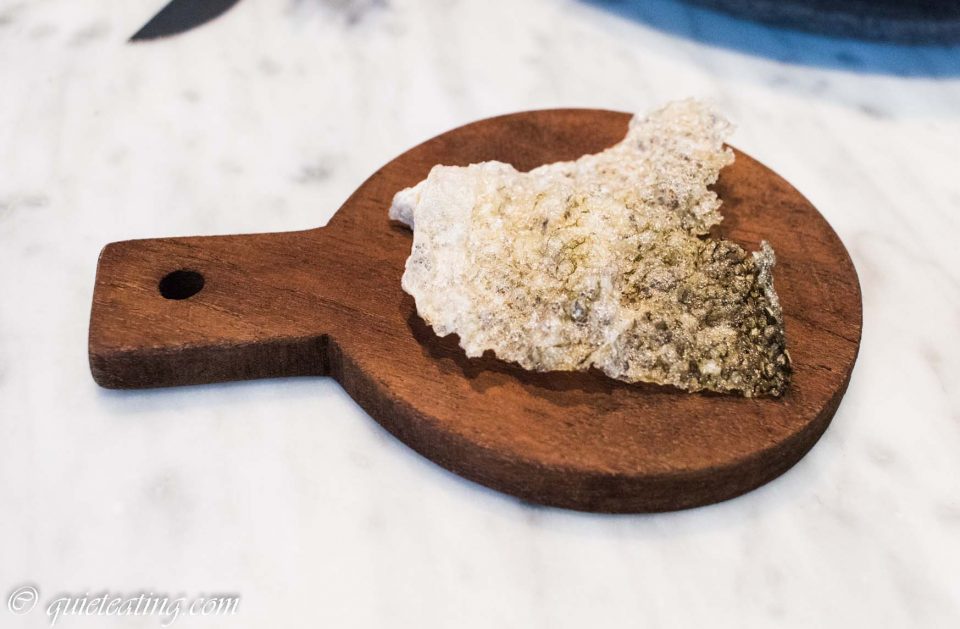 Cod skin.  Not to be outdone by the chicken, the cod also had to make an appearance.  Bubbly and lightly dusted, this was good but not as great as its pecking brethren. 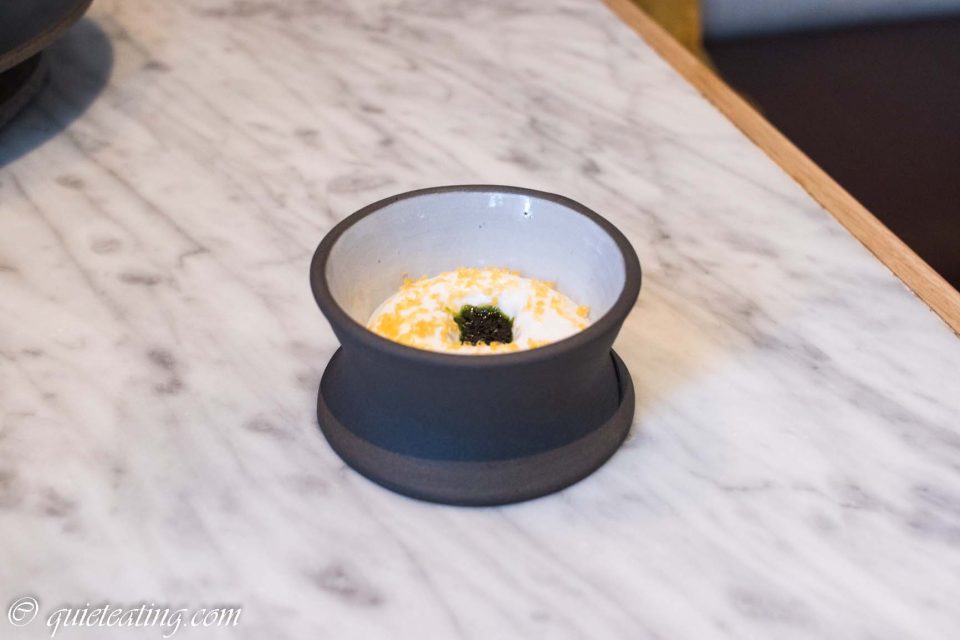 Cod roe.  A final part of the fish, this was what the skin was to be dipped in.  This buttery emulsion provided great counterpart to the crunchiness of the skin with contrasting hard and soft, creamy and harsh notes.  Great. 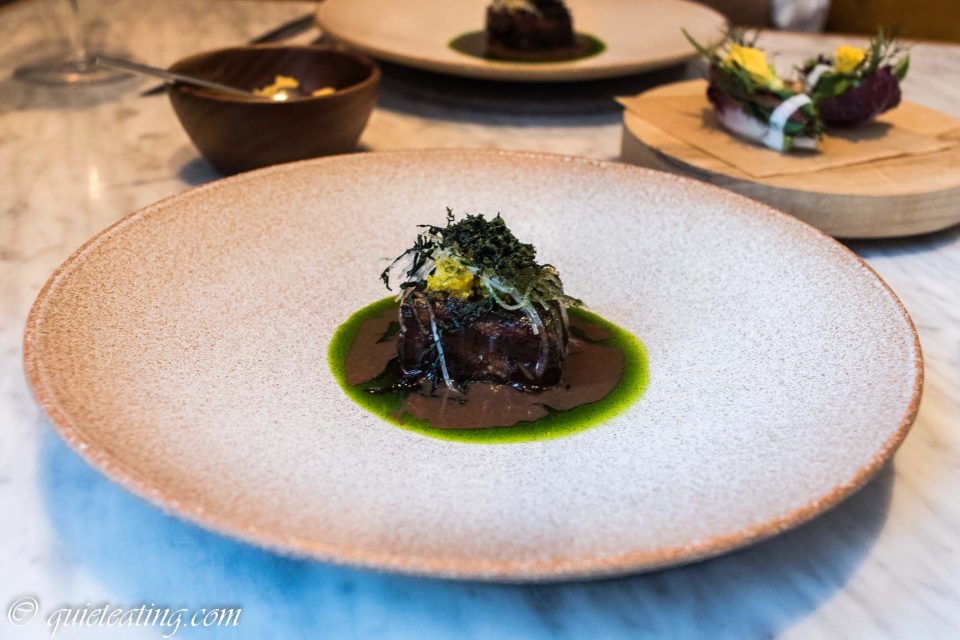 Pork belly with garlic and vegetables.  This little specimen of pork was rather dressed up for its own party.  It was meltingly soft and almost made me want to rush down to the farm to take a bite out of a pig myself. 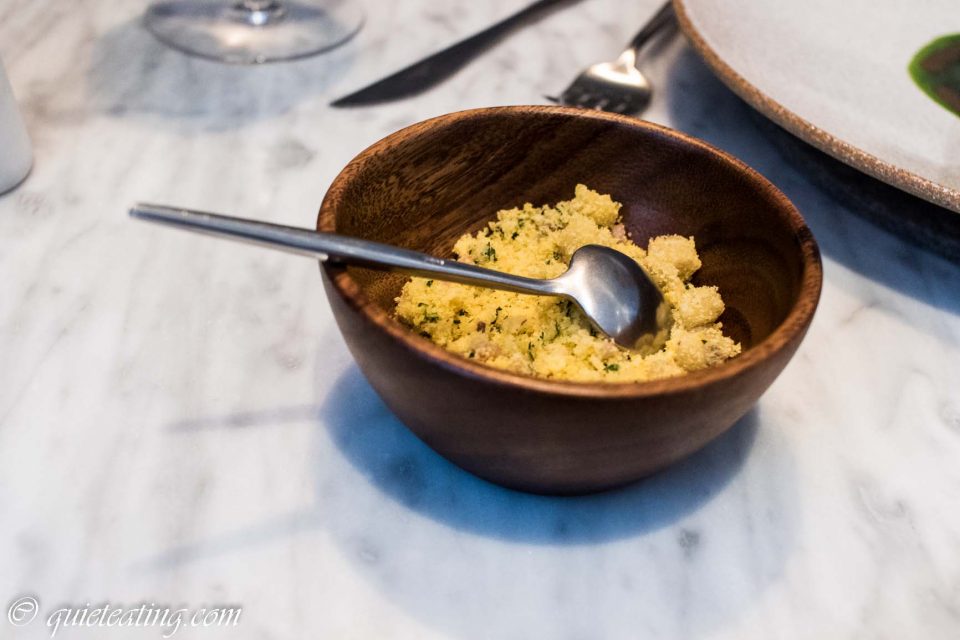 Corn flour and banana.  A very interesting accompaniment to the pork, a sweet and light carbohydrate base to soak up the pork juices.  Gone too quickly. 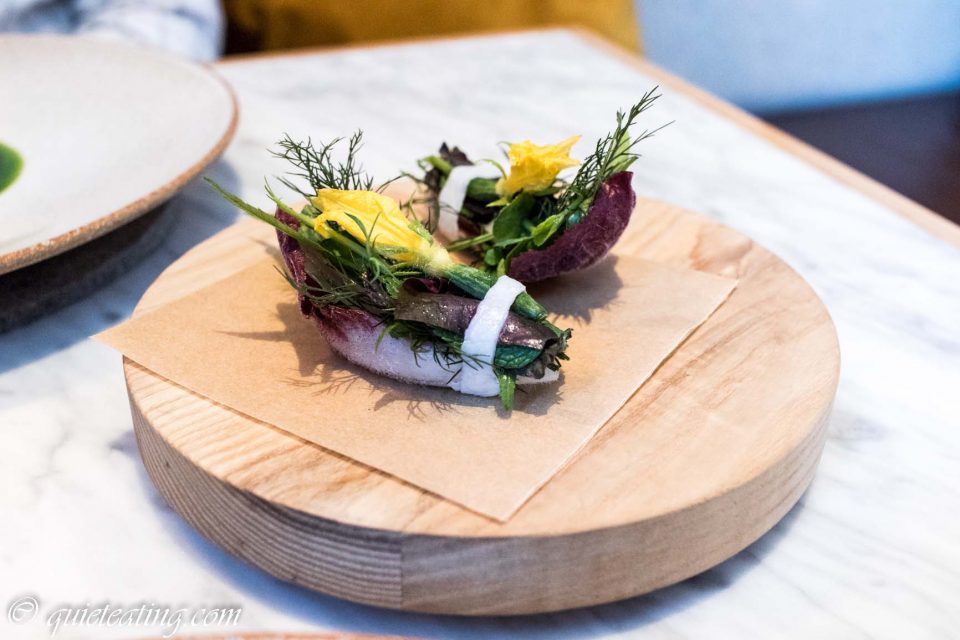 Lettuce with herbs.  On the other side of the corn flour, were these careful wrapped vegetable dumplings to delude me into thinking that I was getting my five a day.  I wasn’t but this was a show of how quality can overcome quantity with clean (and picturesque) images and tastes combining for something good. 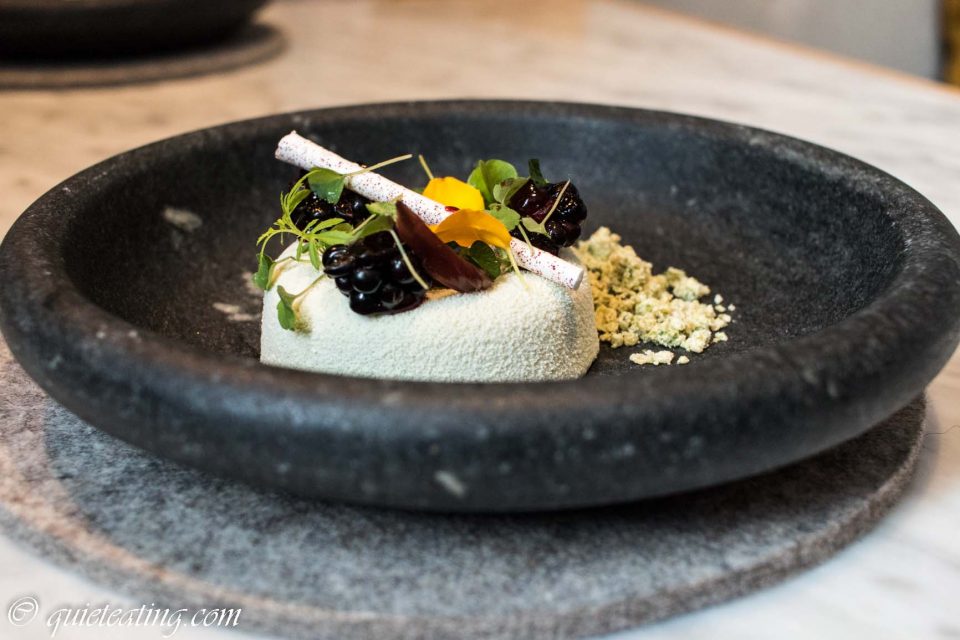 Sorrel ice cream with balsamic vinegar.  Here again, an item of particular beauty.  It almost seemed as though the ice cream had been coated with some type of flour to keep it at the right temperature.  The brittle and the berries were good but the balsamic vinegar was inspired.  The sharp taste of the vinegar cut through the sorrel and berries to create one of the best ice cream desserts I have ever had. 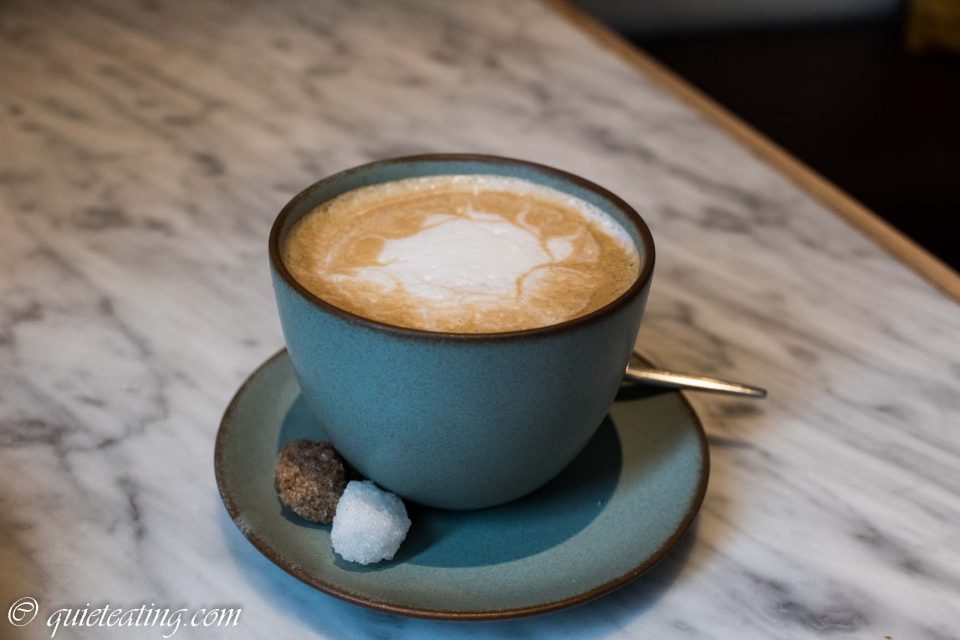 Latte.  In a very pretty cup, this was decent.  Then again, if the coffee was up to the high standards of the rest of the food there might be trouble as the dining room was already crowded enough as it is.  Things would only become more awkward if coffee also became a draw. 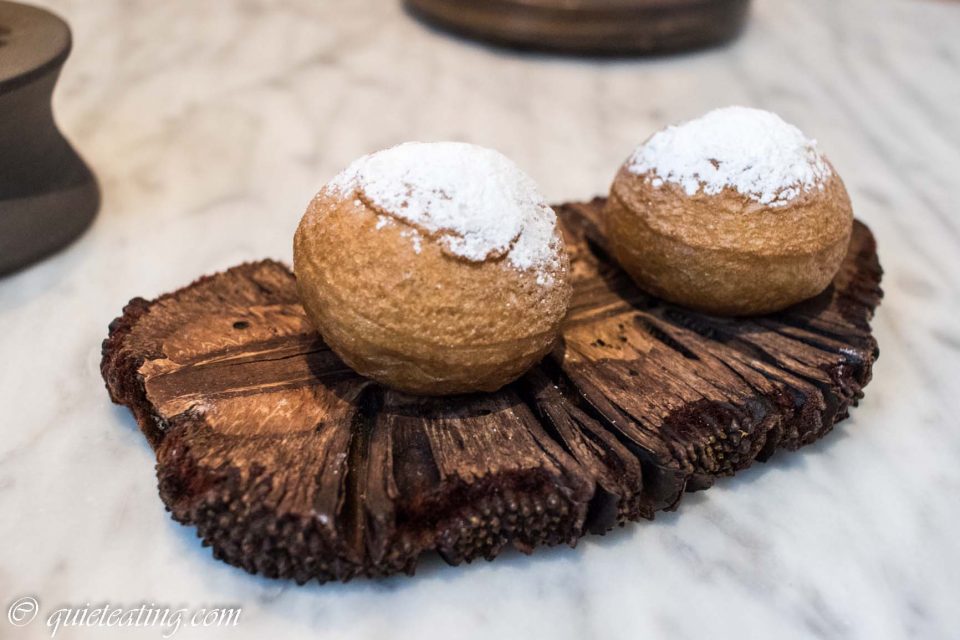 Donut with creme de leche.  This donut puts Krispy Kreme in its place.  This is what a donut should be like, not intense sugar overwhelming tastes of everything else but the filling or topping complementing the dough base.  These were good. 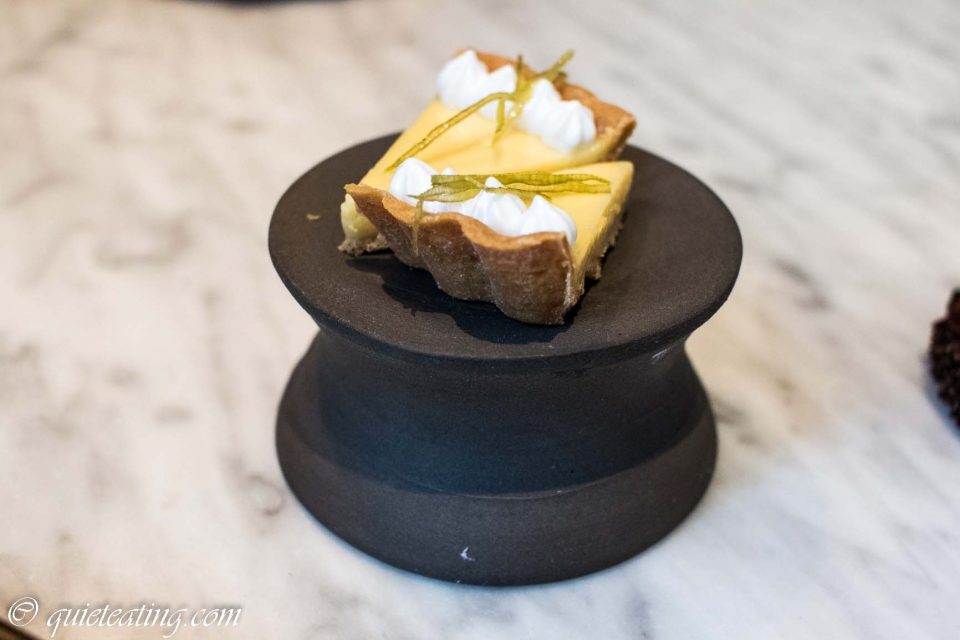 Bergamot on lemon tart.  With a little tang to send you on your way, a parting handshake.

As much as I disagree with some choices of the tire man (i.e. Michelin man), I have to agree with the latest addition of this place.  To use their language, a one star is “a very good restaurant in its category”.  To use the language of the restaurant, this place is “da bomb”.