An unanticipated effect of fame can be the loss of something.

It could be humility (look how great I am).

Yet most sadly, perhaps it is just loss of 20/20 vision instead morphing into something rather more constrained and dark.

So here I found myself at Perilla, the day after the UK had so very sadly decided to leave the EU.  As the rather rambunctious (if not eloquent) British prime minster had said repeatedly, he was here to get Brexit done.  Now that he had completed the first stage, I needed a bit of a pick me up so I could endure just a little more. 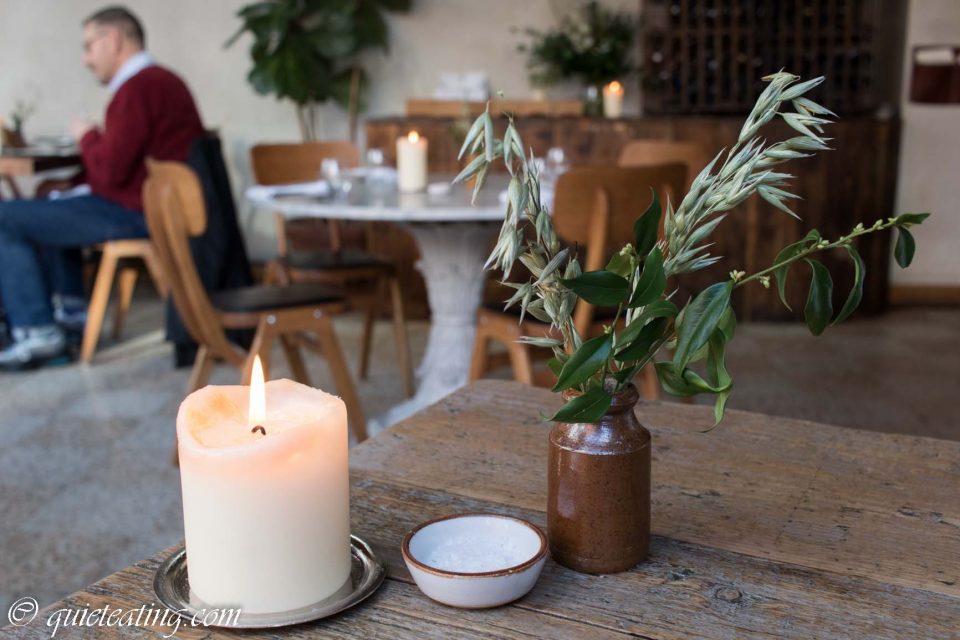 Plant, salt and candle.  Thoughtful of them as these lay out various manners in which you can dull the pain of the lost of continental Europe.  (1) Eat dry looking plant to cause mouth pain.  (2) Overload tastebuds with salt.  (3) Then burn yourself.  I resisted the siren call with great difficulty.  I was in a bad mood.

Turning to more interesting things, let me speak a bit about this place.  Perilla has been featured recently in the Guardian as a place that chefs like to eat at.  That is probably the reason why it was packed to the rafters.  That also had an entirely foreseeable effect on the service.  It made it non-existent.  After having tried in vain for 5 minutes to catch a waiter’s eye, I had to devolve, even at the risk of looking more like an imbecile than I am, to waving both arms frantically and spastically to gain attention.  When I was finally waited on, on account of creating so much distraction that I was probably annoying other diners, I enquired of the waitress why I had to wait so long but she pretended not to hear me.

Ah.  So it was going to be one of those meals then. 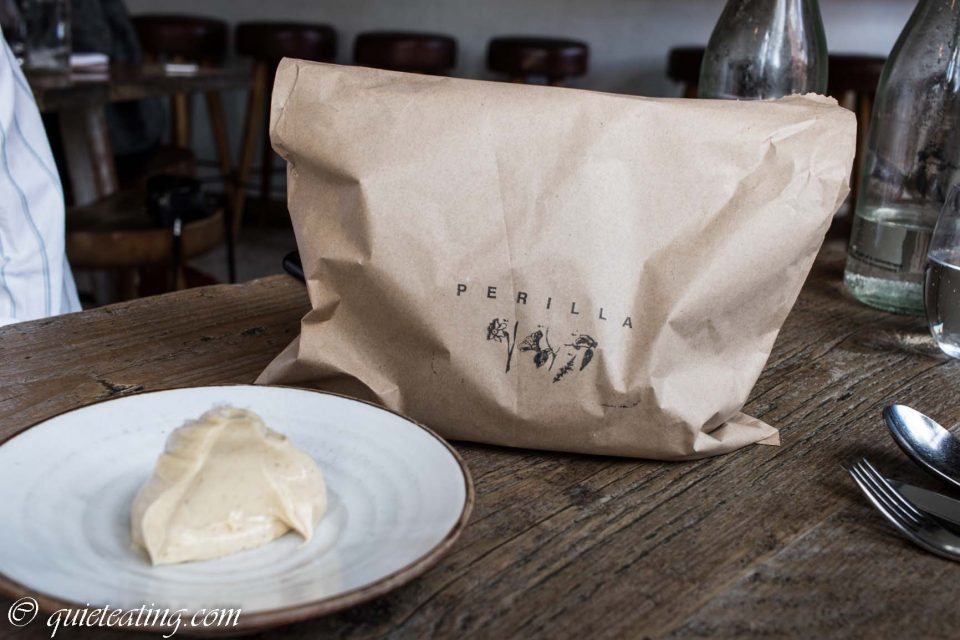 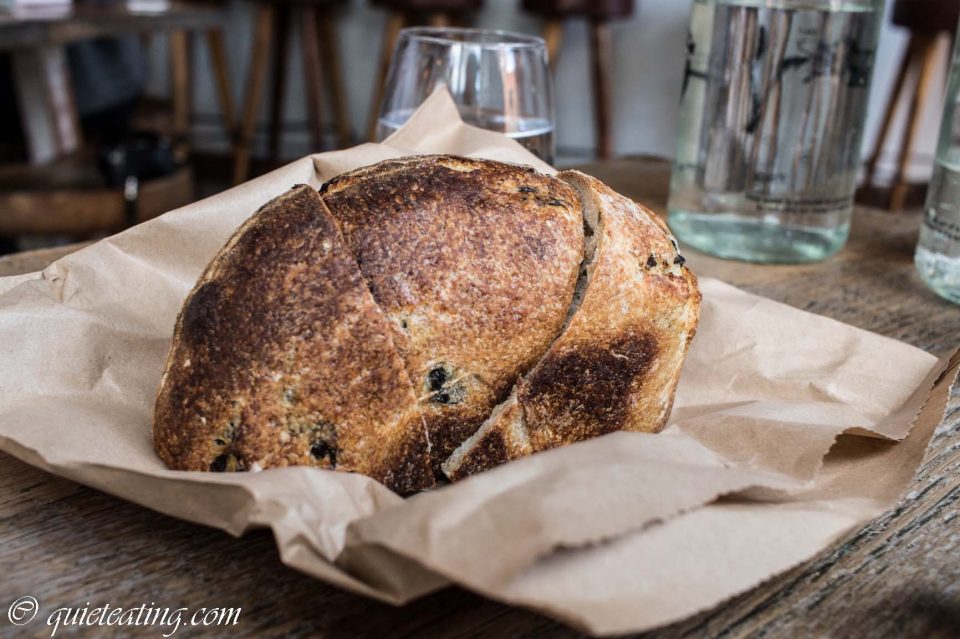 Perilla sourdough bread with brown butter.  Yet, as I tell my friends I live in hope.  This bread seemed to reward that optimism as this was excellent.  Soft and springy interior, crunchy crust, a delight in my tummy.  Such a contrast to the service. 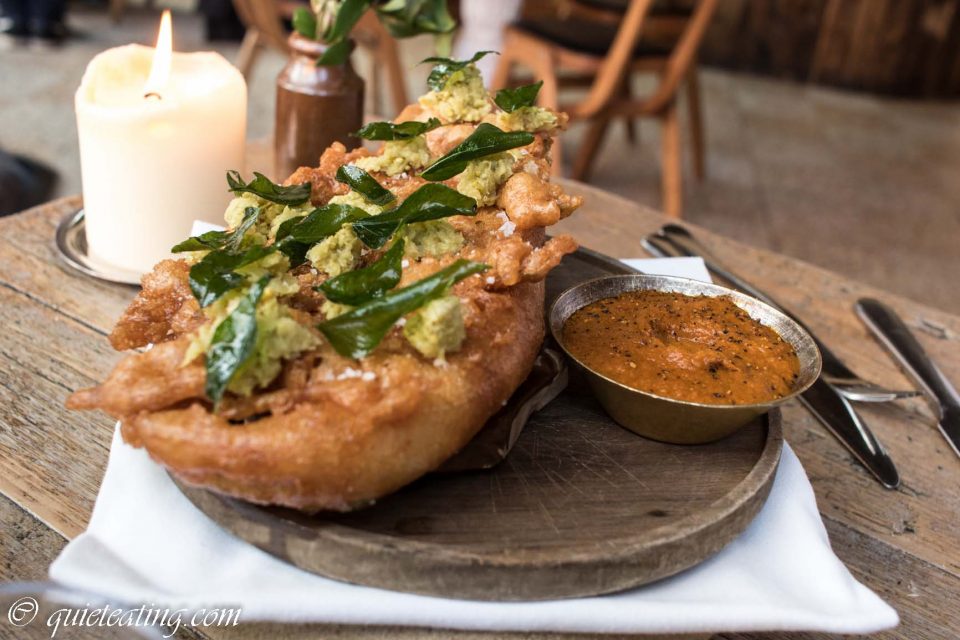 Whiting fried in beef fat with chip shop curry sauce.  This was interesting.  With the curry sauce, it become even more fascinating.  A crisp fried fish with a bit of curry sauce on the side, this was decent if not awe inspiring. 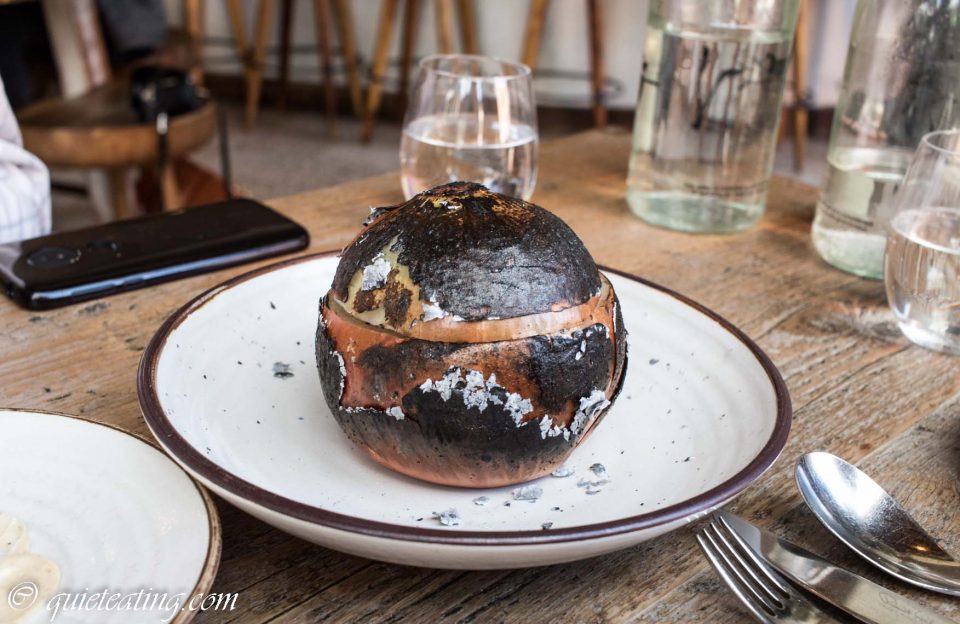 Mutant onion.  Haven’t seen one this size for a while. 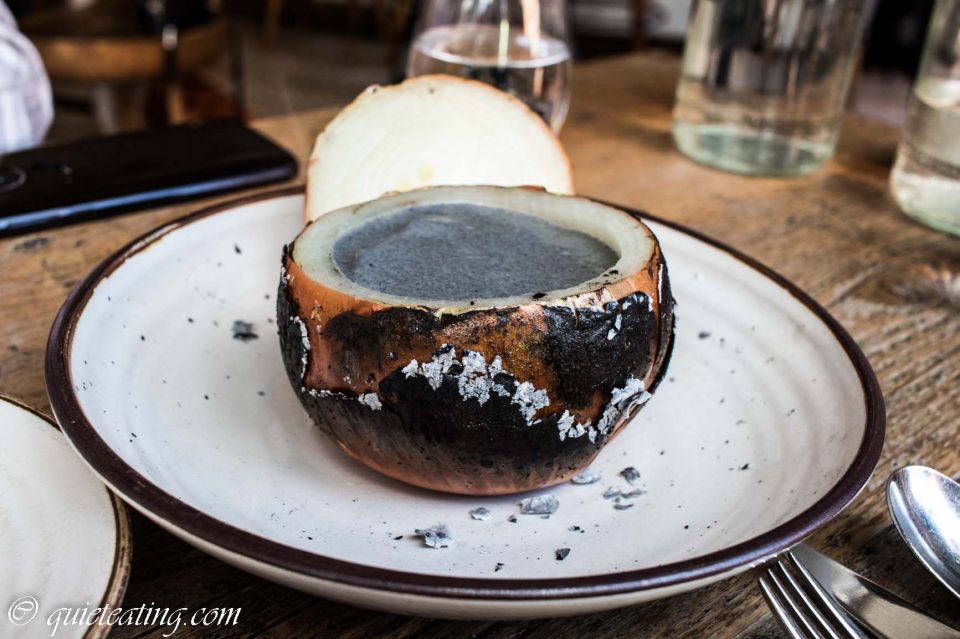 With burnt onion soup inside.  A creamy sauce inside, this was an excellent onion soup in an onion.  Very artfully presented.  I tried to dig around for some onion flesh but that didn’t turn out that well.  Instead think of the smooth, luscious, velvety soup going down rather well. 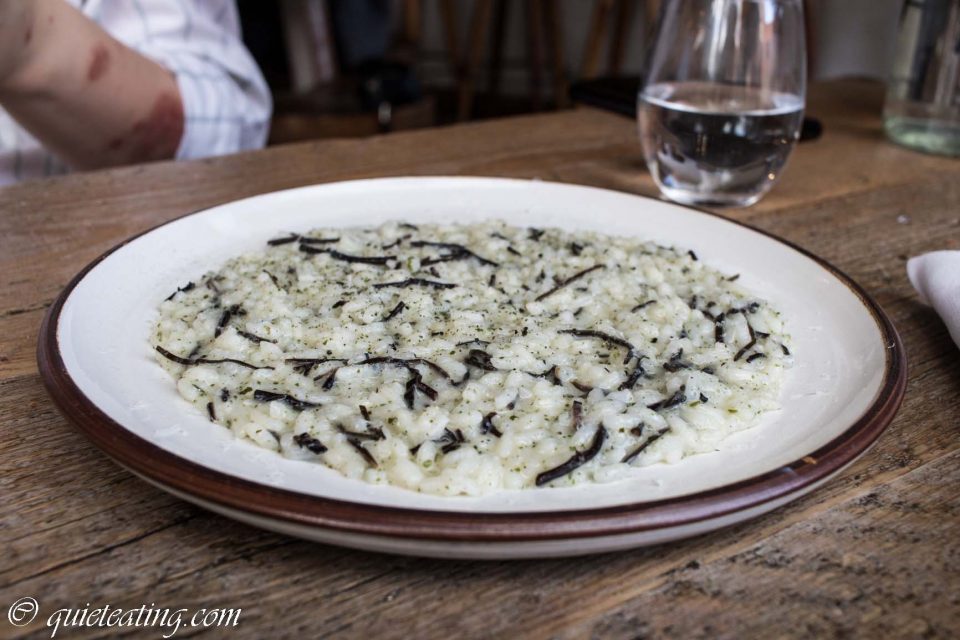 Seafood risotto.  A bit unimpressive.  While billed as seafood risotto, it tasted more like ricefood risotto as the taste of the ocean was not readily apparent.  On the plus side, the rice was nice. 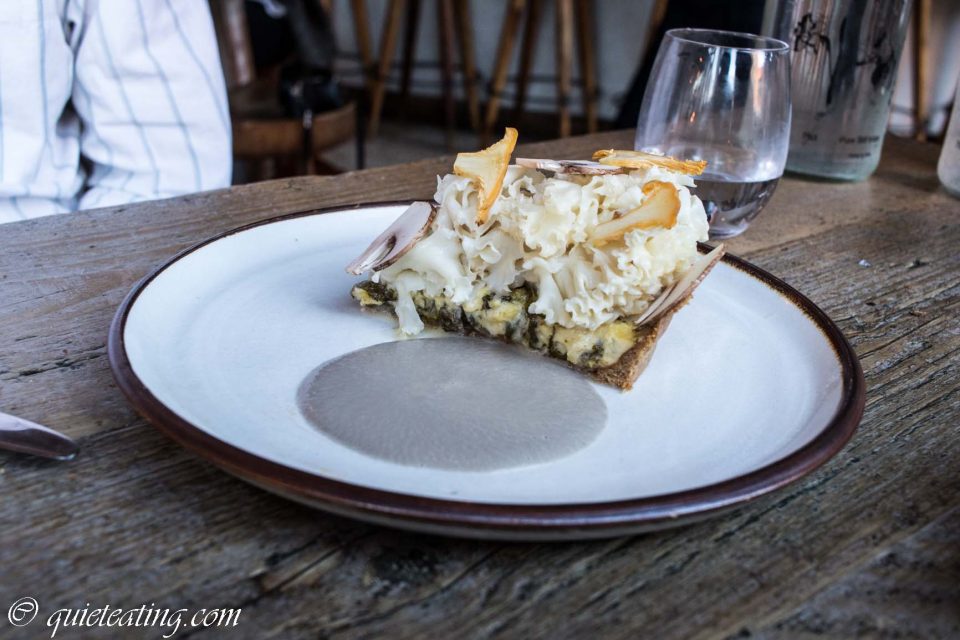 Mushroom tart.  The tart base was excellent.  As demonstrated from the bread and now the tart base, they have a talented patissier in the back.  Commenting on the creamy tart filling, dairy met vegetable there and made things all better.  The top though seemed to consist of a scattering of raw mushrooms.  Snow fungus, button mushroom and frilly top white mushroom (I think).  The forest on top was a visual feast but rather lacked a bit in the taste department.  Instead, I would have been happier with a bit more of the base.

Herdwick lamb with grilled courgettes, berkswell and basil.  I must apologise for having for the lack of photos of the lamb.  I seem to have forgotten to take it.  I blame my fuming self as I stewed about the service. Yet you aren’t missing much though. 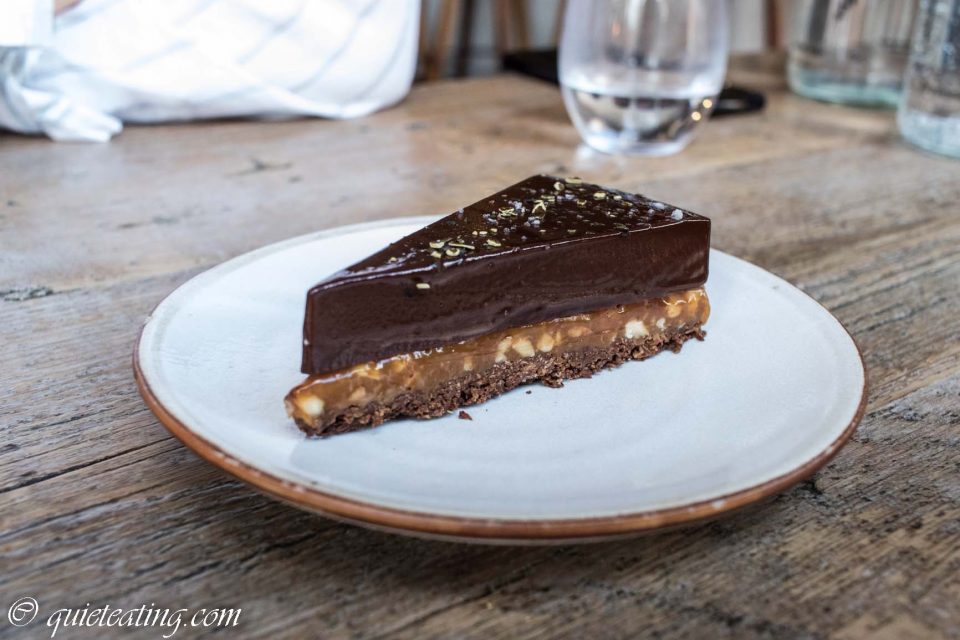 Chocolate with salted caramel and roast peanuts.  Thick cream and delightful nutty base.  Again, another example of talented flour fingers.

It was then, that it seemed that the end had naturally come.  Yet, I found that it was difficult to get someone’s attention to bring us the bill.  It just seemed that they wouldn’t let me go.  I did manage to finally get some attention by making more of an arse of myself than usual.  Yet, I shouldn’t complain too much, as at the end I got Perilla done.