When I was a kid, I quickly learnt that storming off in a tantrum rarely seemed to help me.  Screaming, shouting and trying to embarrass the parents would get me precisely nowhere.  In fact, it would be counterproductive as I would then be subject to punishment of the psychological kind.  Even in my young and innocent years, it was clear that I loved food.  A foreshadowing of the snob that I was to grow up to be.  Retribution would not be by starvation but just lack of taste.  If I behaved badly, gruel would be on the menu until I learnt to behave.

However, strangely enough, it seems that if you are a big kid, it sometimes seems to work.  Well, at least if your actions are best seen on the world stage.  It only seems that the higher the stakes, the bigger the spectacle.  Yet I will spare people’s blushes in this case, as nowadays it seems to happen rather frequently.

So in an attempt to get over recent high stakes political trauma, I decided to visit the Portland.  Sister restaurant of Clipstone, where things (although not math) had gone so well, I was expecting good things. 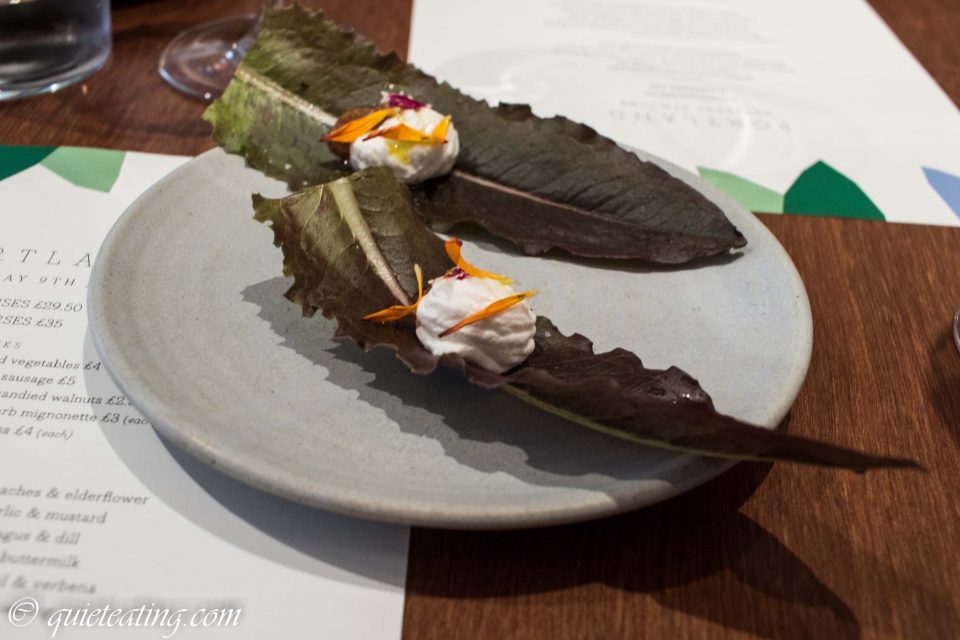 Some cream cheese on deer leaf.  Sorry, I wasn’t really paying attention when the waiter explained this.  So unfortunately, I cannot provide more detail on this.  Similarities to politics should be ignored.  The leaf was interesting, the cream light and interesting.  A nice welcome to lunch. 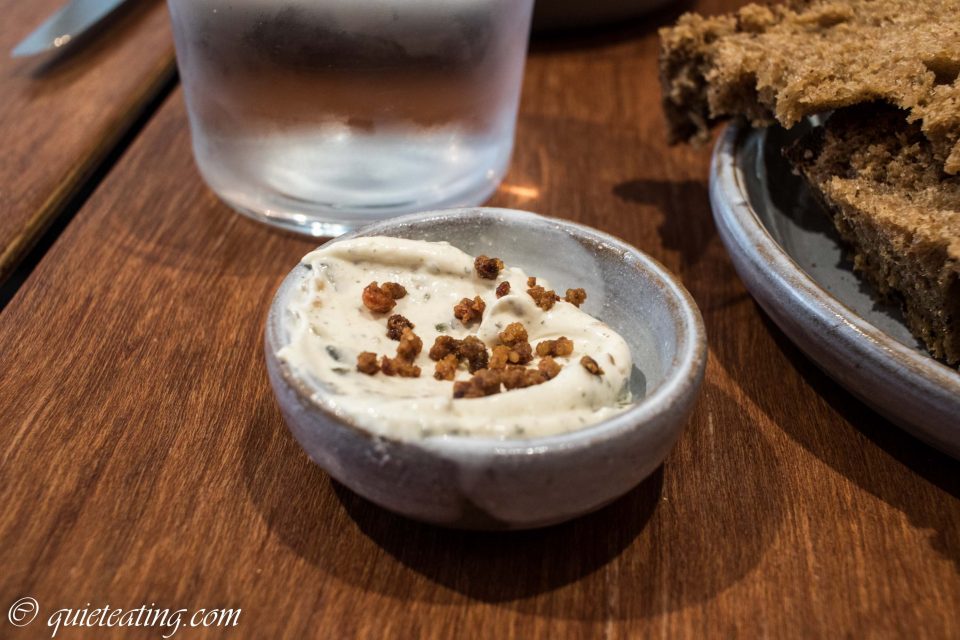 Beef fat with bacon bits.  With something like this to spread, I would be happy with underwhelming bread. 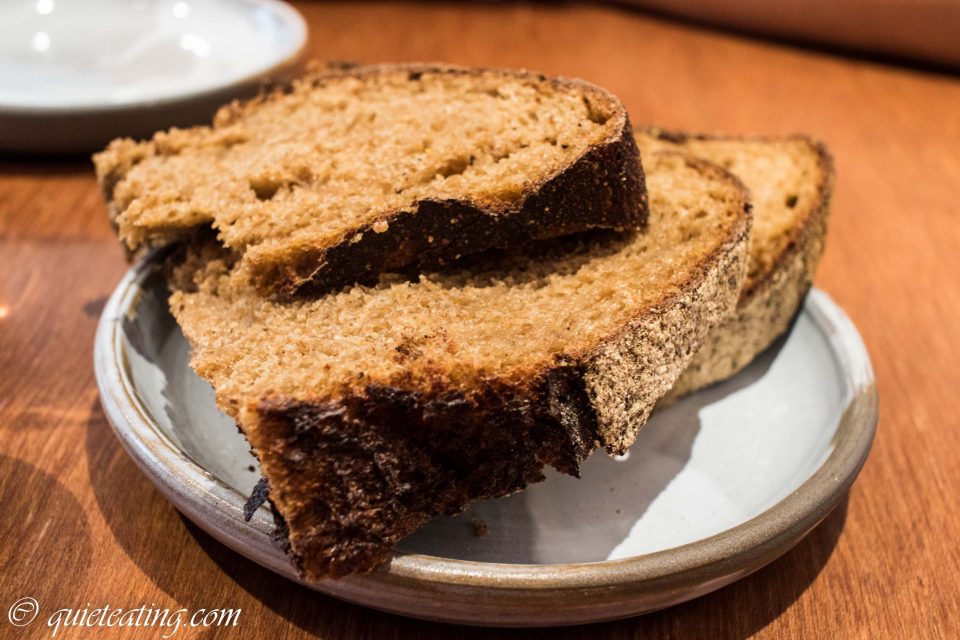 Bread.  However, when it is bread like this, the result is nothing short of excellent.  Fat slathered on carbs, some of my favourite things.  Especially when both are prepared in such great tasting ways. 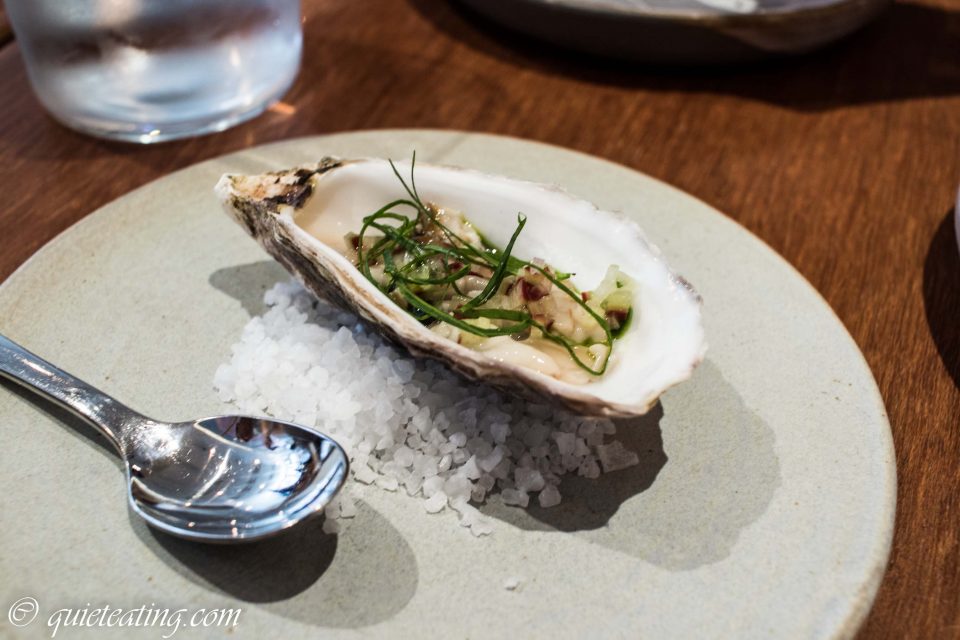 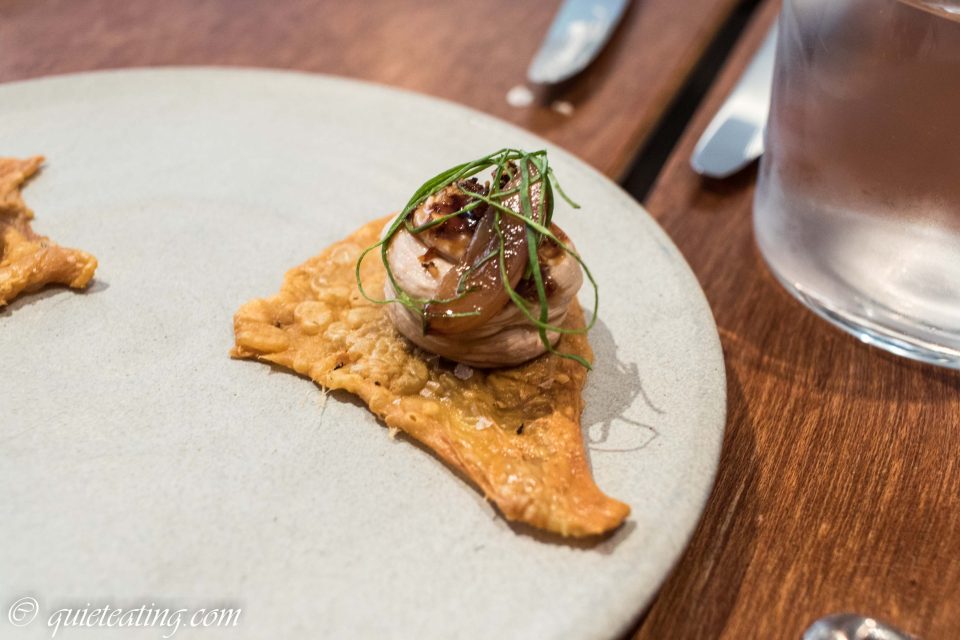 Crispy chicken skin, liver parfait and candied walnuts.  You would be forgiven in thinking that this little triangle was a Dorito.  No, instead that is chicken skin.  I was first introduced to this tasty invention at Kitchen Table.  It was good here as well. 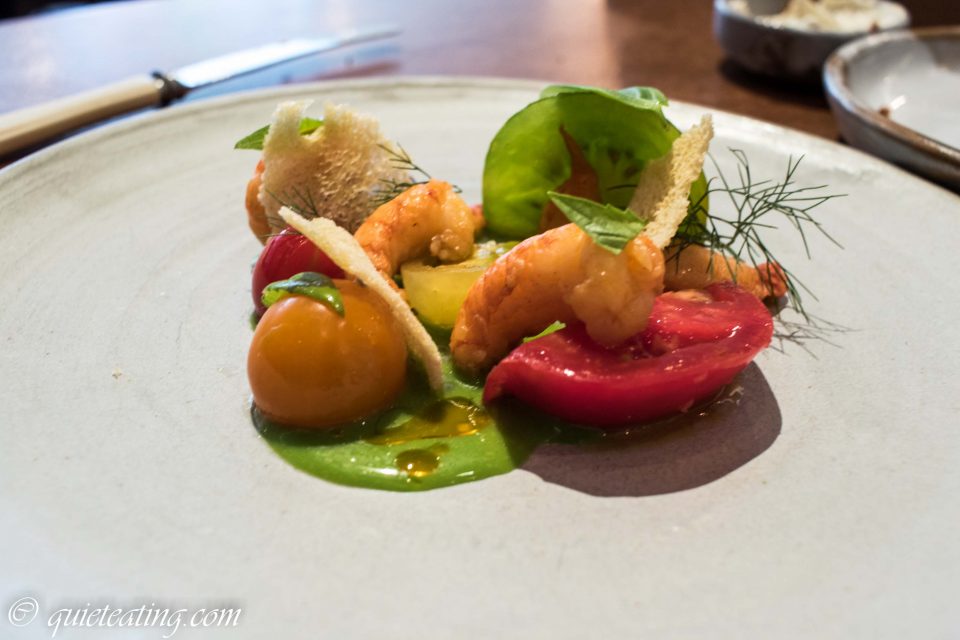 Oxfordshire crayfish, new season tomatoes, basil and verbena.  The vegetables were so bouncy, it might have come just from the backyard.  The crayfish was succulent and good.  Delightful clear tastes of tart, meaty, juicy and umami created something good here. 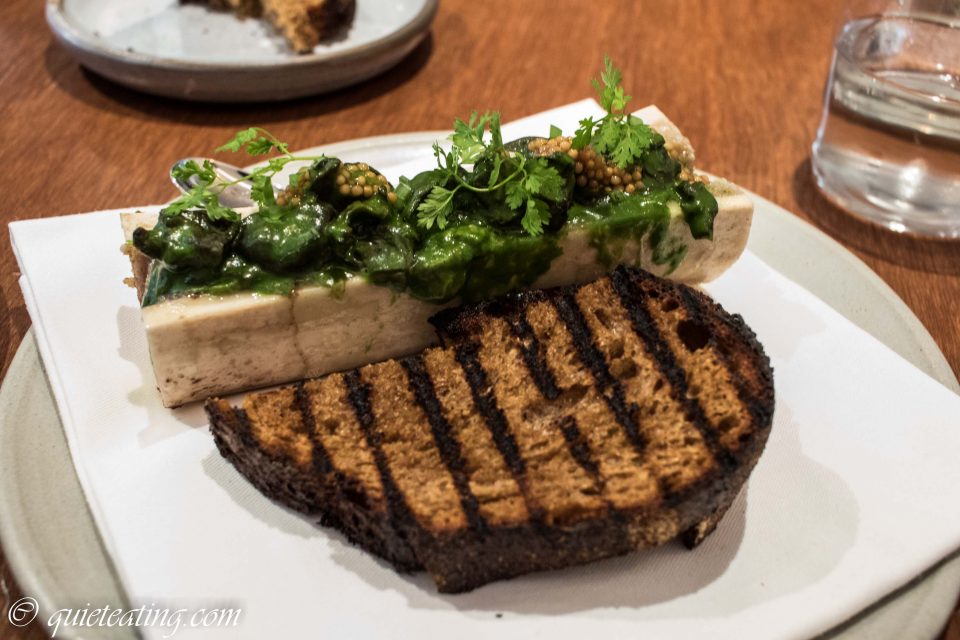 Bone marrow with English snails, wild garlic and mustard.  English snails?  Something from the back yard?  Yet, if my backyard yielded treasures like this, I would spend my weekend hunting round the dark corners of my garden, if I had one.  With bone marrow this was inspired. 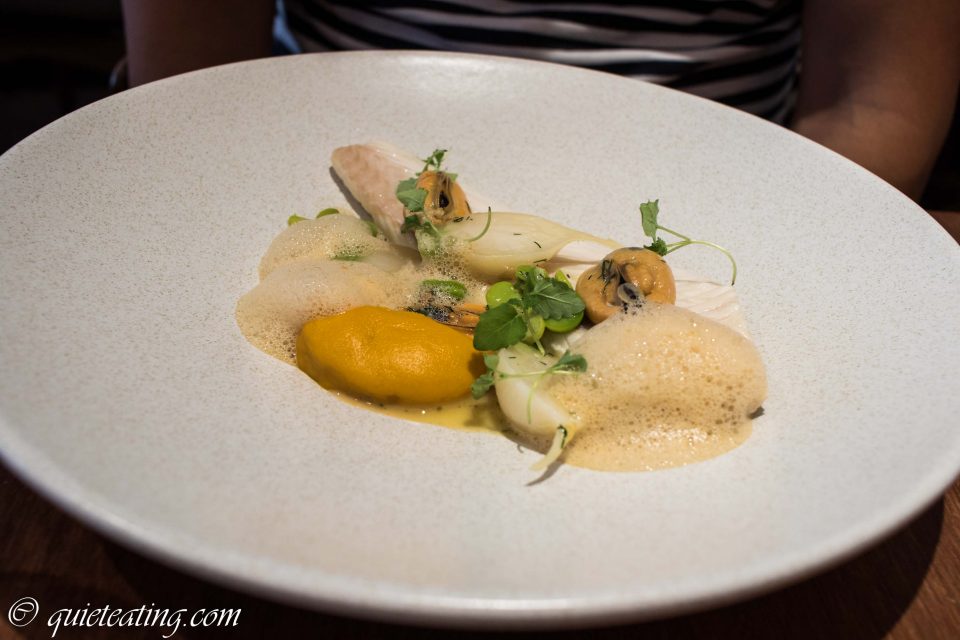 Cornish plaice, mussels, broad beans and lemon balm.  Delicate flavours and light emulsions.  Although this was not really for me.  Not that it was not good food, but because I prefer something with heavier taste. 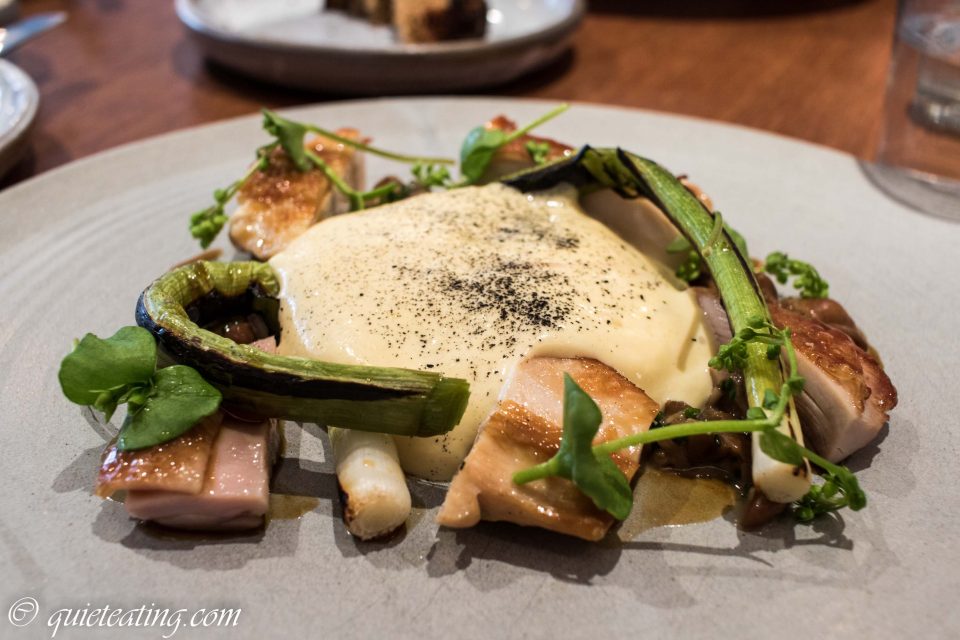 St Bride’s chicken, mousserons, baby leeks and Madeira sabayon.  Like this chicken.  In the words of one particular friend, this really hits the spot.  The chicken was cunningly cut into almost fat free pieces yet retained slick succulence.  The cream, leeks and mushroom only served to heighten the taste.  My criticism of this dish was that, like most good things, it was gone before its time. 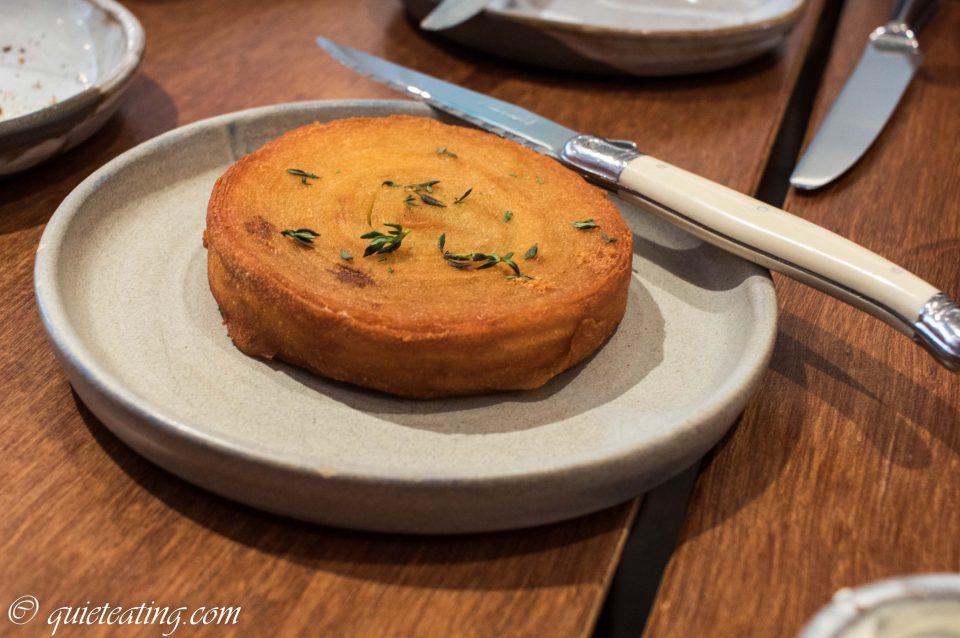 Potato galette.  Fried potatoes in slices, cakes made of the same, put all together, these are some of my favourite things.  Digging into this, it certainly was. 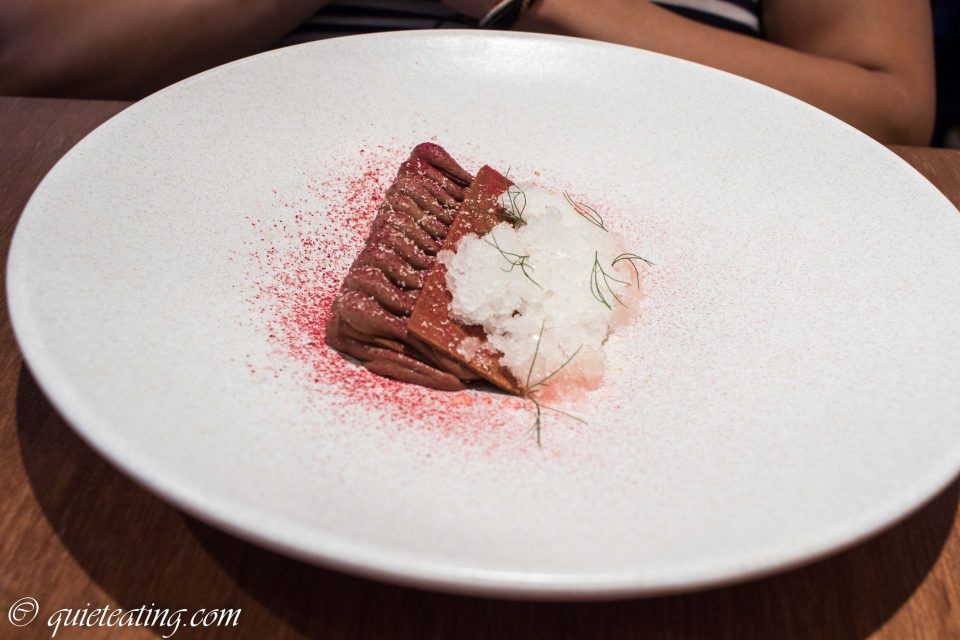 Grenadian chocolate cream, frozen woodruff and nutmeg.  An interesting mixture of biscuit and chocolate, something that I have tried to recreate at home through a much simpler method of spreading nutella on biscuits.  Doesn’t really work out the same and this demonstrated what I was missing out on.  A great dish. 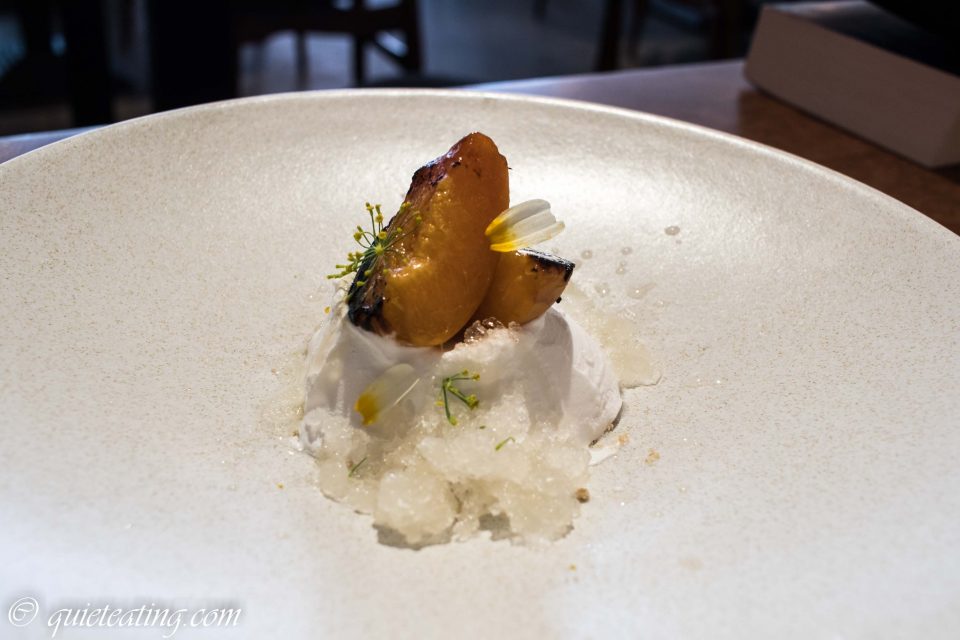 Coconut parfait with peach.  Light and interesting, this was alright. 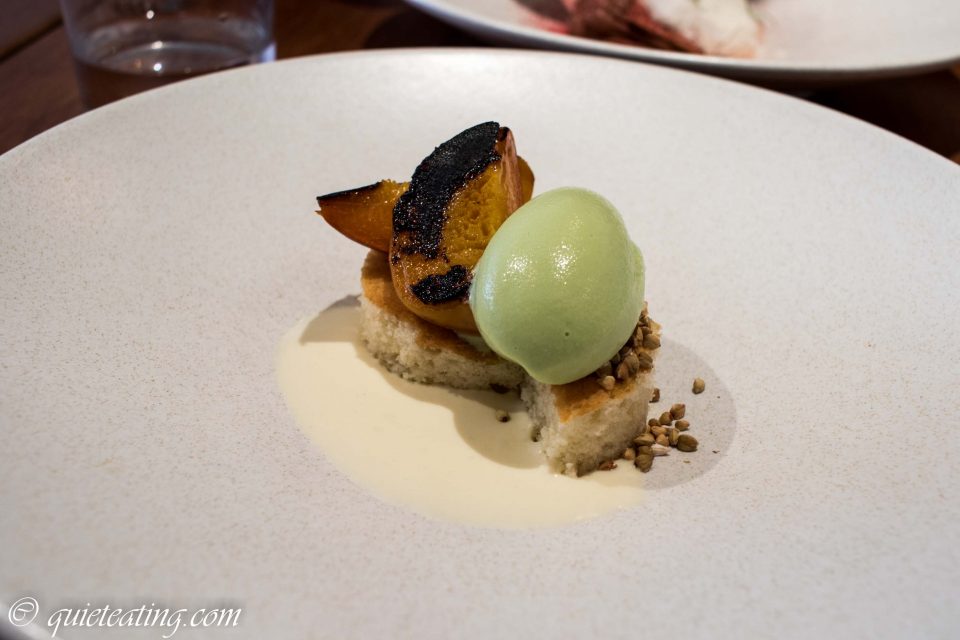 Apricot, yoghurt cake, chamomile cream and tarragon.  The nuts were particularly good, the yogurt cake a bit too flaky for me.  It just didn’t seem thick enough to soak up all the juices. 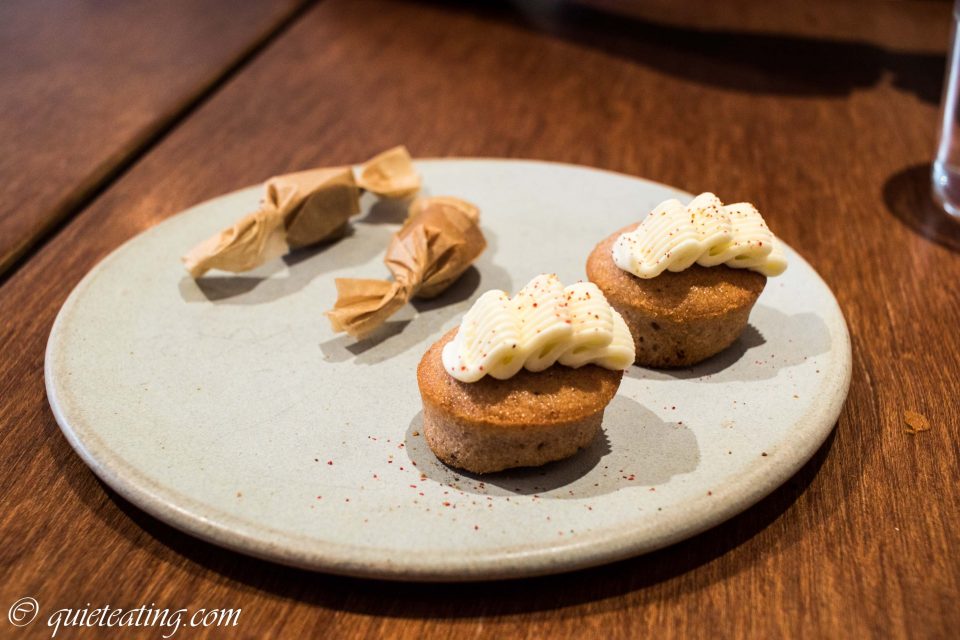 Chocolate toffee and madeleines.  A nice little goodbye if not living up to the greatness of what had come before. 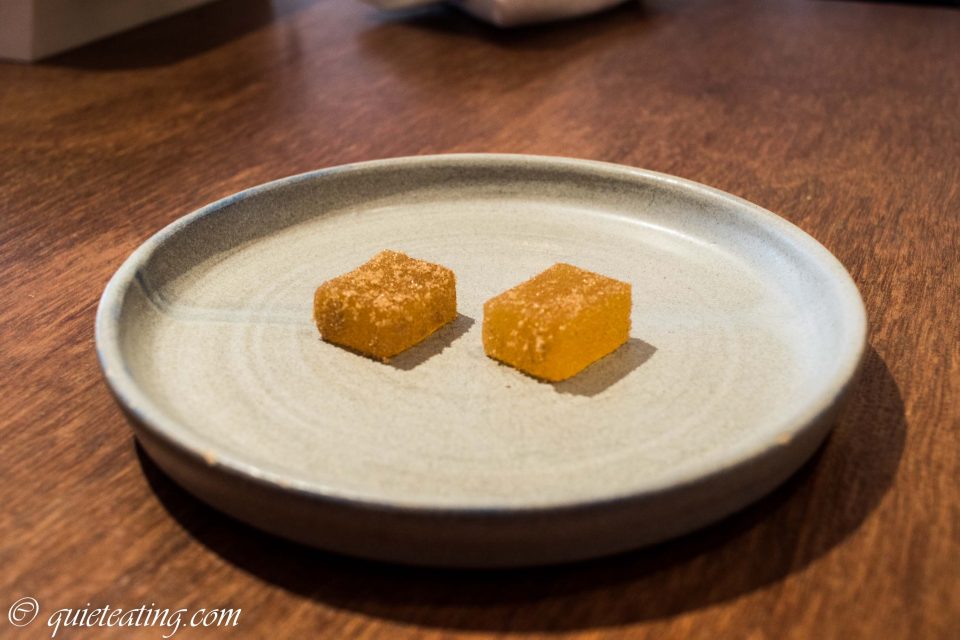 Jelly.  Sadly disappointing.  Paradoxically too sweet and too tart.  It tried to be a bit too much of everything and kind of fell down.  Perhaps it might have been served better by just staying true to its colours, something that some politicians have no trouble doing.

Before I came, my suspicions were that the Portland was all going to be a lot of song and dance and not too much substance underneath.  I was to be thankfully disabused of this notion but then again you should just walk 2 minutes up the road and visit the younger, rougher, cheaper but better tasting sibling, Clipstone.  Yet as melancholy as this sounds, food is one of the simple things of life.   I should be thankful that if I don’t like some food, to fix it is easy.  The next day I could just try somewhere different.

Unfortunately, the politics of the day are not so swiftly rectified.  For better or worse, you are stuck with the people in power, at least for a while.  Then again, it’s not like collectively we don’t have a choice in democracy. It is the worse type of government tried, except for all the others.

Lunch (3 courses plus a snack) was GBP38 per person excluding drinks and service.