One of the dilemmas that often faces me in my high paced and stressful job (that’s my amateur food blogging in case you were wondering) is how to score a restaurant.  It has led to many heated and impassioned debates with friends and acquaintances.  Even though I delight in providing unsolicited commentary of restaurant food, I cannot say that I always appreciate the same of my blog.  When looking for things to pick on (everyone, as I well know, is a critic), one easy target of debate is my scoring.  It might help here to give you some background about this.

At the start of my restaurant blogging career, the problem is that I did not have any helpful anchoring for scores to put things into perspective.  The average 5 one day might actually become a sublime 9 once you had savoured a particularly bad run of restaurants.  Alternatively, the bee’s knees of 8 might drop down to 4 if the converse was to play out.  So instead I resolved to do my best to provide the best absolute score I could.  However, inevitably when I score a restaurant, I could not help but relate on a subjective basis.  Was the place I had just tried as good as, worse or better than other places I had been?

To further delineate my rating system, I then found myself having to introduce a .5 system.  As for whether I might instead just go for a 20 point system with whole integers instead, let’s not go there.  So at the end of each meal, in an attempt to come to a more objective experience instead of licking a finger and waving it in the air, I would always ask my dining companions what they thought.  Although I did have an unfair advantage here.  With the weight of my restaurant reviews, I reserved the right to simply override what others thought, as a benevolent dictator, I maintained that I could be persuaded. 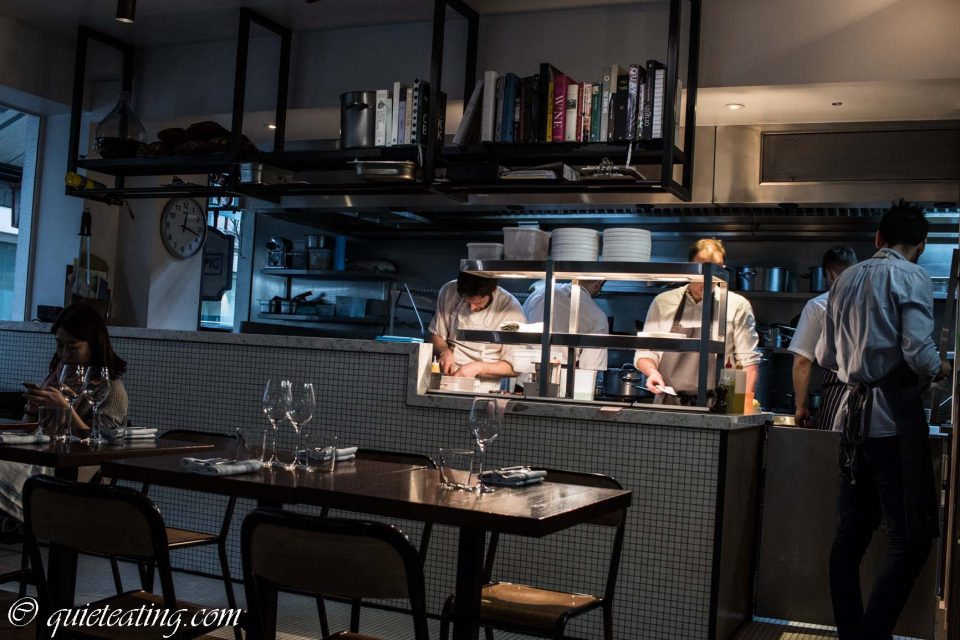 This is the open kitchen of Clipstone.  With the dining area just to the side, full of earthy and industrial furniture, I was already expecting much.  As they tried to minimise the amount of distraction that ambience might take away from the food. 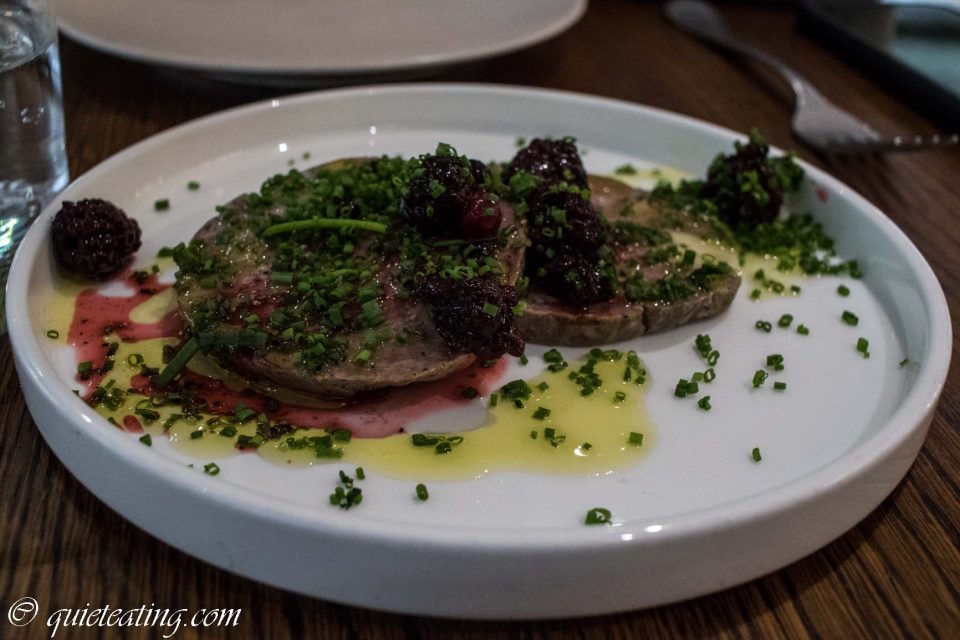 Pork and pistachio terrine and pickled blackberries.  This was a heavy and meaty dish.  With tart and full flavours, it was a pleasant way to start. 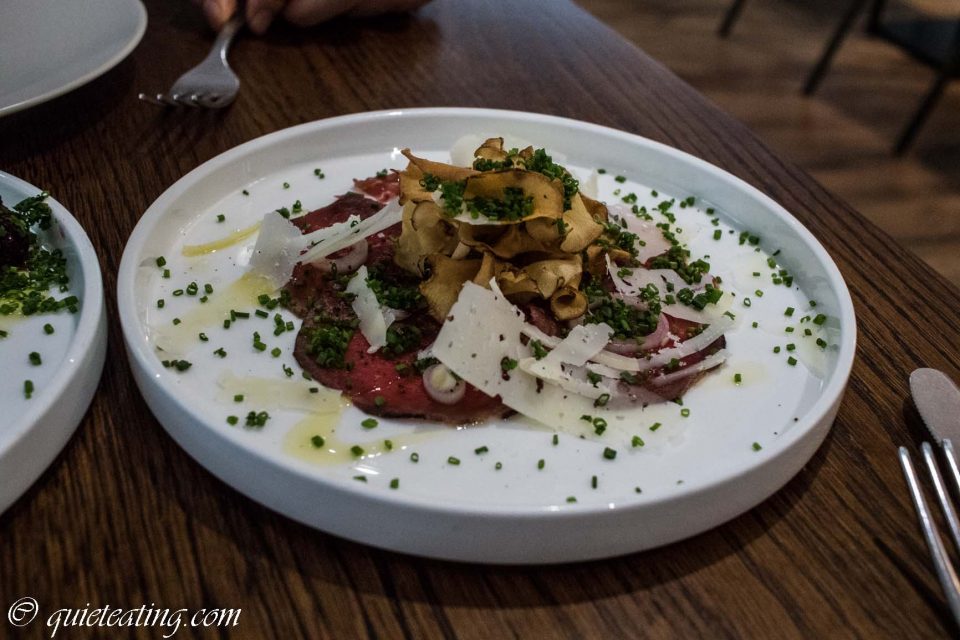 Beef carpaccio, redcurrants, juniper, pecorino and chips.  Although the beef was sliced extremely thin (I could have done with some heavier slabs), the combination of clean, beefy, tart and umami went well together. 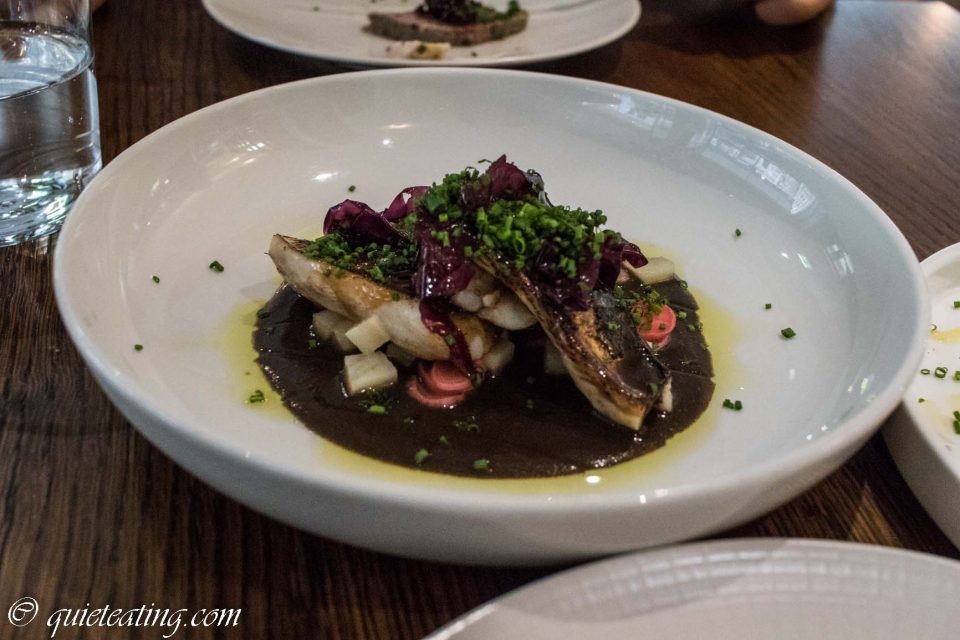 BBQ mackerel, fermented mushrooms and pickles.  This was a stand out dish.  The carefully cooked mackerel cooked was only enhanced by the pickles and sauce.  Crisp skin with flaky flesh, it was great. 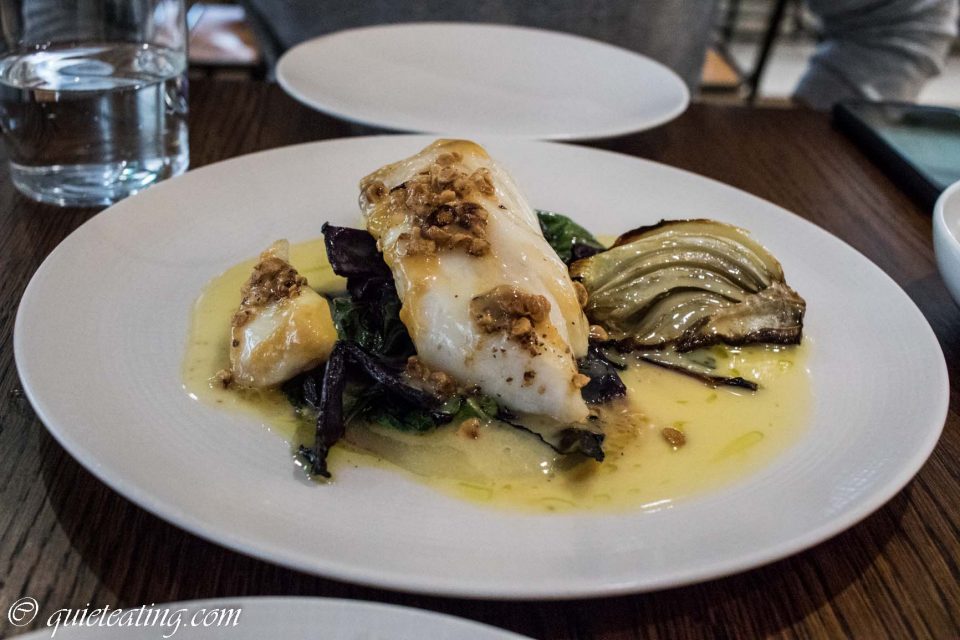 Cod, hazelnut miso, chard, young leeks and plum butter.  Another example that the kitchen could do seafood exceedingly well.  This cod benefited from obvious fusion with miso and hazelnut finishing.  Delicately cooked, this was a most excellent fish. 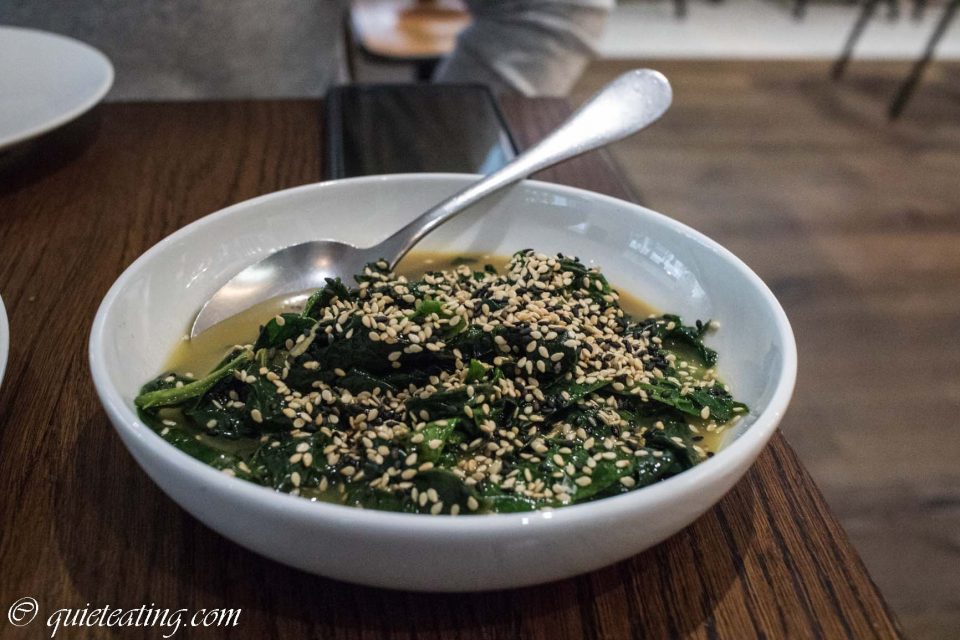 Spinach, ponzu butter and herbs.  A far East touch was also apparent with this side, ponzu and sesame seeds made an appearance to add depth to an otherwise often boring vegetable.  It was so good that I think this is the best spinach I’ve had in memory. 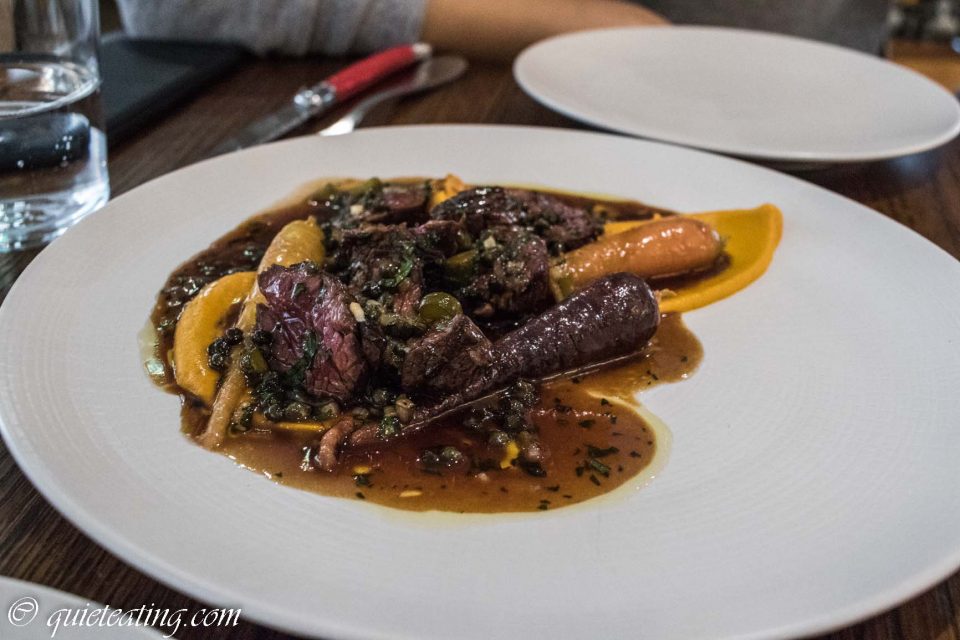 Belted Galloway onglet, carrots and sauce charcutiere.  I returned to earth with the next dish.  The onglet, although carefully cooked, couldn’t hold a candle to the cod, even if the carrot puree and sauce were inspired.  The onglet was just a bit too chewy and did not live up to the stratospheric heights of the cod.  In any other restaurant this would be the star.  Instead here, it brought the total score down. 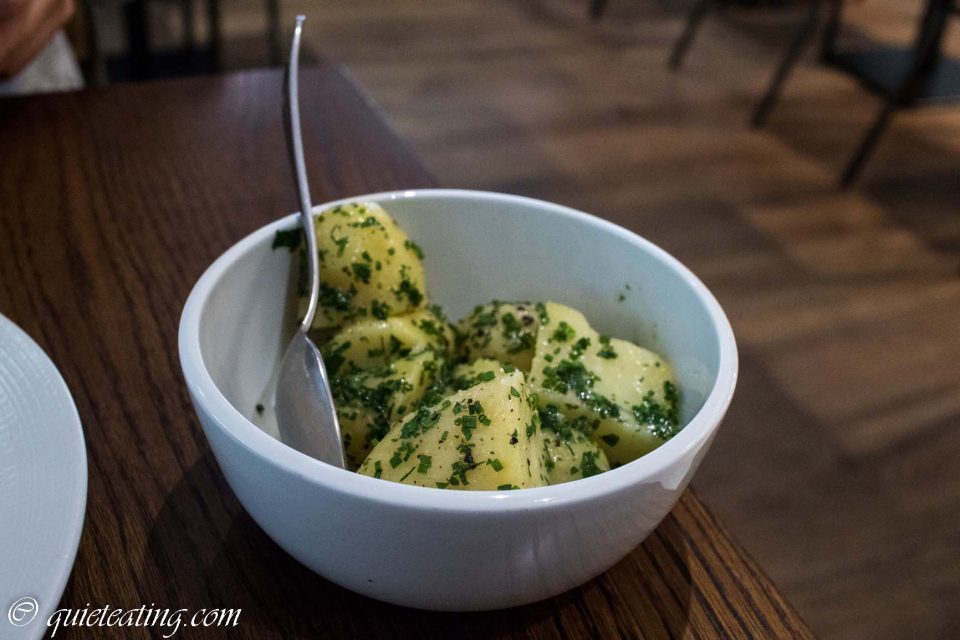 Ratte potatoes, smoked butter and herbs.  Sadly a bit bland, although not so bad when used to mop up the sauces of the onglet.  If I came again, I could happily give this a miss though. 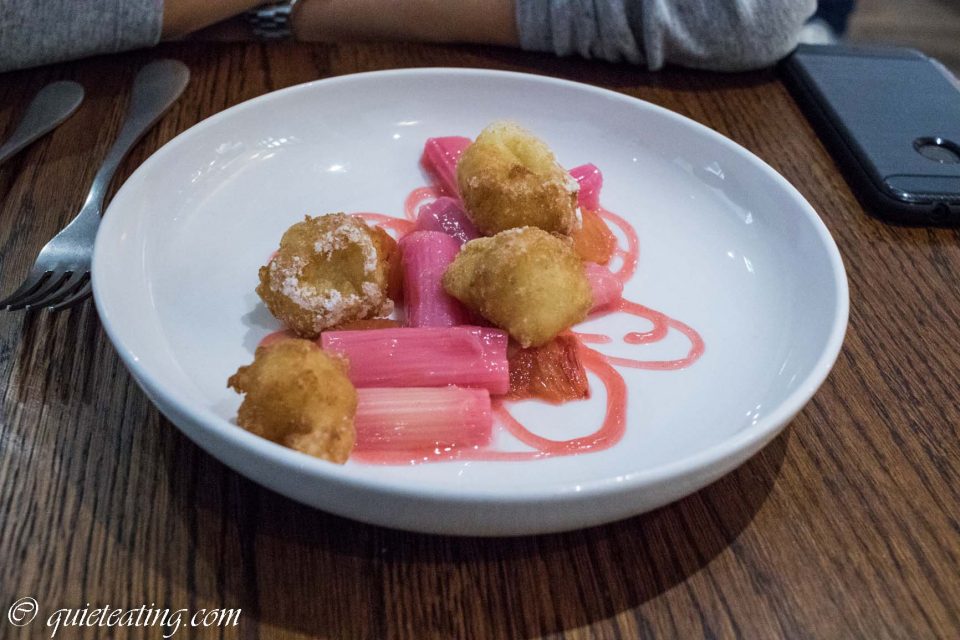 Yorkshire rhubarb, blood orange and beignets. This was not bad but nothing special.  The beignets were a nice touch but the rhubarb not really to my liking.  Although I would say here that this is due to my own personal tastes. 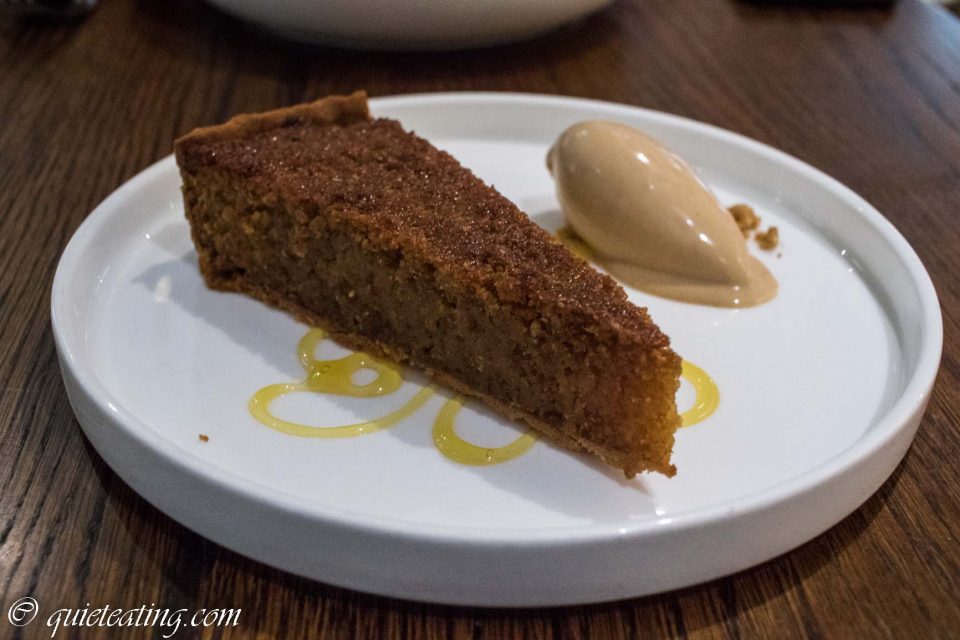 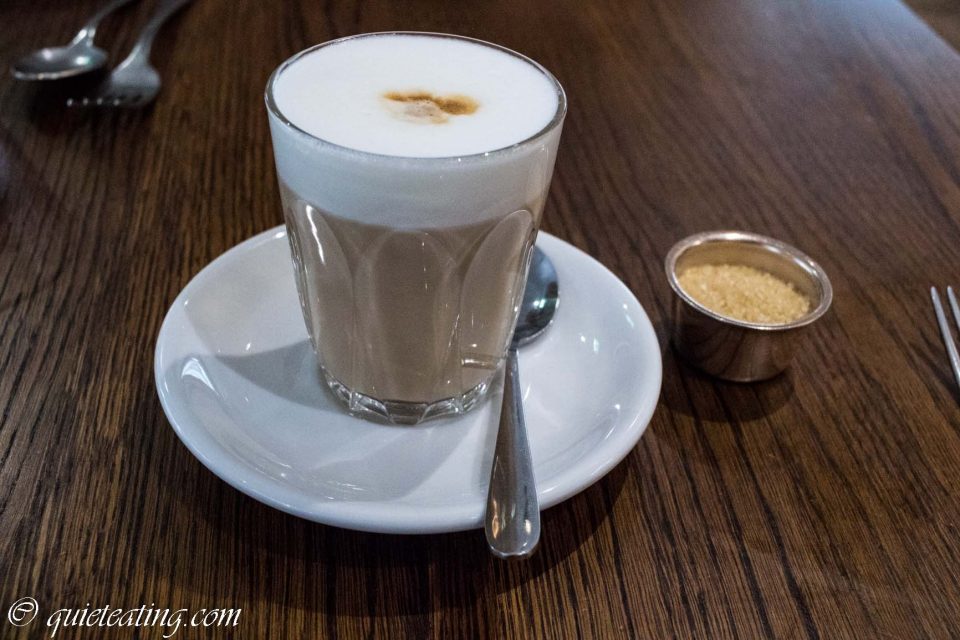 Latte.  Having had such interesting experiences, I though it would be best to end with some coffee.  I thought that perhaps I might be surprised.  I was.  It was rather ordinary.

As we approached the end of our meal, my dining companion and I hotly debated what score this place should get.  He is well aware of my slightly annoying habit of trying to score everything.  He will even wait patiently as I whip out my camera before tucking into a meal.  In this case, I started our debate with the opening line that it was a very pleasant affair, laid back, modern yet rustic and unpretentious.  We agreed that it was a good meal.

As usual, we did a blind independent score of the restaurant and then compared answers.  We were stuck just a score of .5 apart and continued to trade jabs and verbal punches to try and get the other to agree.  Such is the hardship of this occupation.  To resolve this seeming impasse, my dining companion joked that all we needed now was for someone to spill tea over me (or some otherwise similarly injurious event), as my score was slightly higher than his.  That would solve the impasse as it would surely mark them down.

He got what he wanted, as I found out in a thankfully less injurious manner.  Simply put, when the time came for us to pay the bill, the waiter could not or couldn’t be bothered to do his sums.  We tried to make it easy with one of us paying a very full number with instructions that the other would pay the rest but apparently elementary arithmetic was beyond him.  Yet, in this day when education is free and compulsory up to the end of high school and over 1/3 of UK students elect and are able to complete university, that seems like a cardinal sin.  So much so that I had to concede that my friend was right, if the restaurant staff couldn’t be bothered to do a simple sum, I too couldn’t be bothered to give them a higher fraction.  8 it is then.

Lunch (3 courses plus an extra side) was GBP30 excluding drinks and service.