There seems to be word on the street that I detest Indian food.  Nothing could be further from the truth.  What I do detest is bad food, regional derivations discarded.  It wouldn’t make sense for me to torture myself by visiting here and here and here and here and here.  I’m not that sadomasochistic.  Ok, in all fairness, eating at the last restaurant in my link was a bit like being roasted slowly over hot coals while being basted with burning oil.  That’s how I imagine a hog feels like over a spit in any case.  Sometimes a vivid imagination is a curse.

Speaking of which, at Chakra, there was an altogether rather interesting conversation going on on a table nearby.  Of how in heaven and hell people must eat with 6 foot chopsticks.  In hell, everyone starves as they try to feed themselves.  In heaven, everyone feeds each other so they are happy and full.  Thankfully we wouldn’t have to resort to such measures to taste the food here. 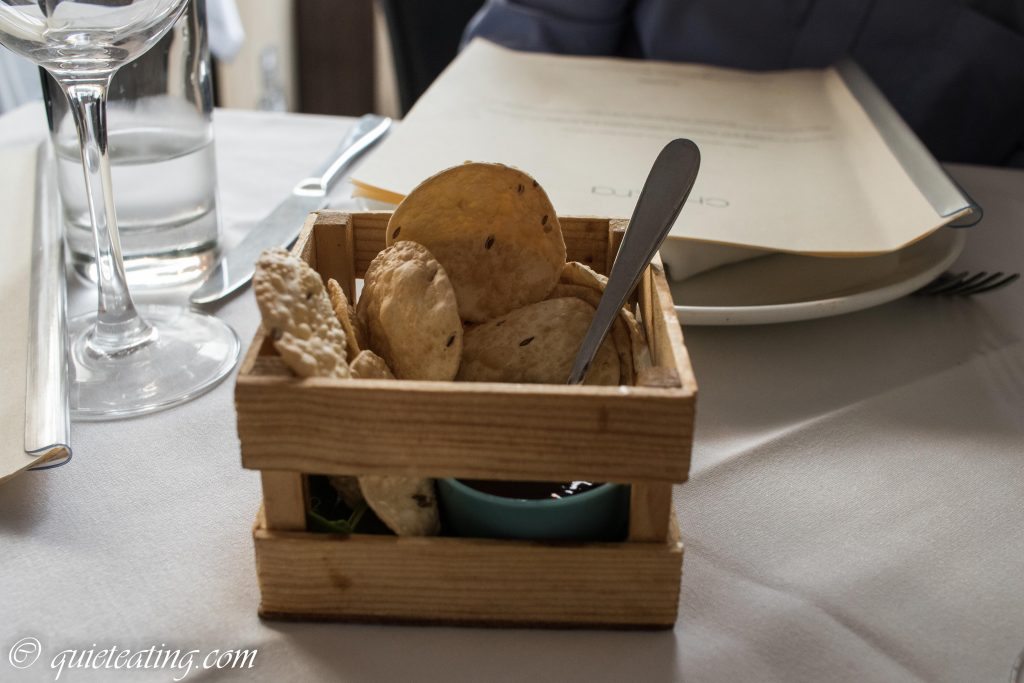 Poppadums to start.  With a sweet sauce, these were not bad and only made me more hungry. 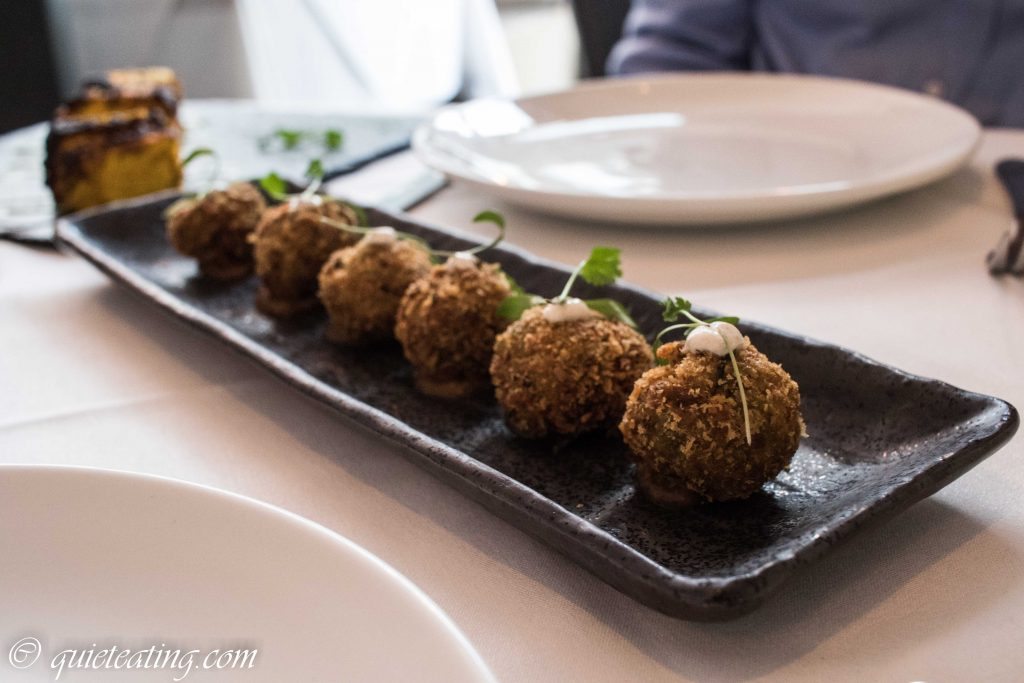 Crispy Avocado Spheres, Curry Leaves, Tomato & Date Chutney.  Crunchy exterior with creamy inside set off with a light chutney, these were a delight.  Dangerous in that I had to overcome my urge to demolish these far too quickly. 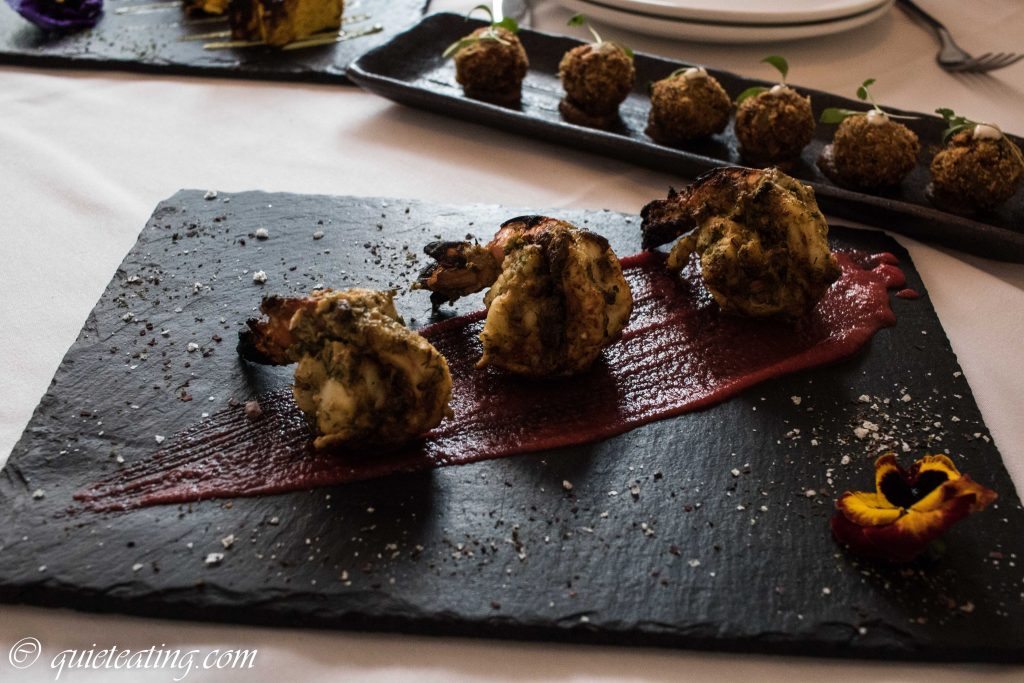 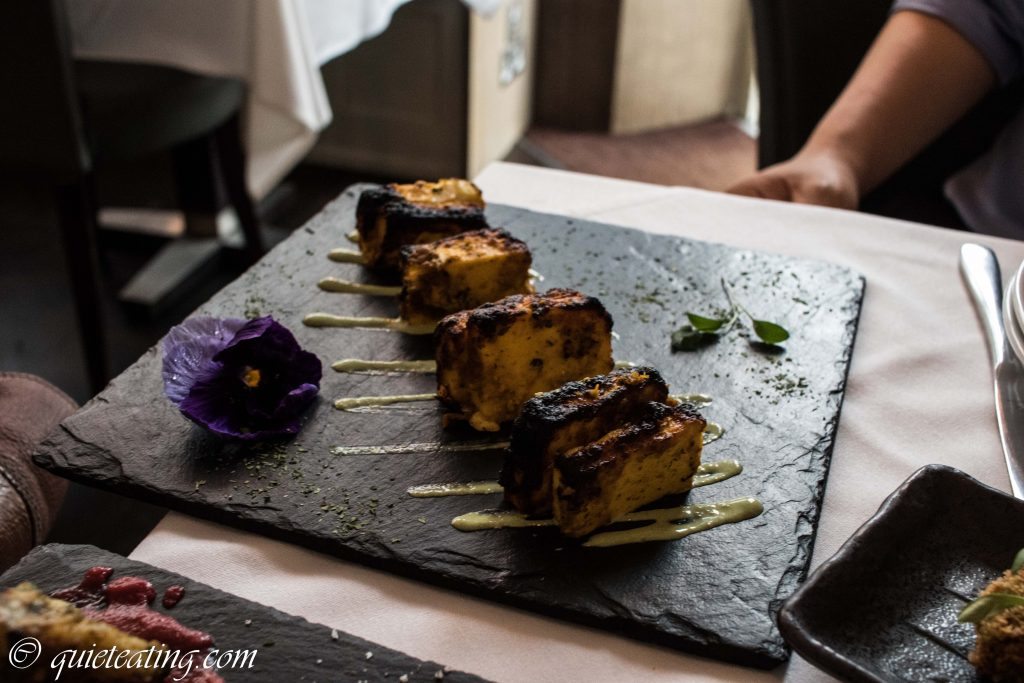 Tandoori Paneer, Basil & Mint Chutney.  I thought these were tofu at first.  As a paneer virgin, these had a similar texture to tofu with a light hint of flavour.  Probably too light for me though but others may enjoy this. 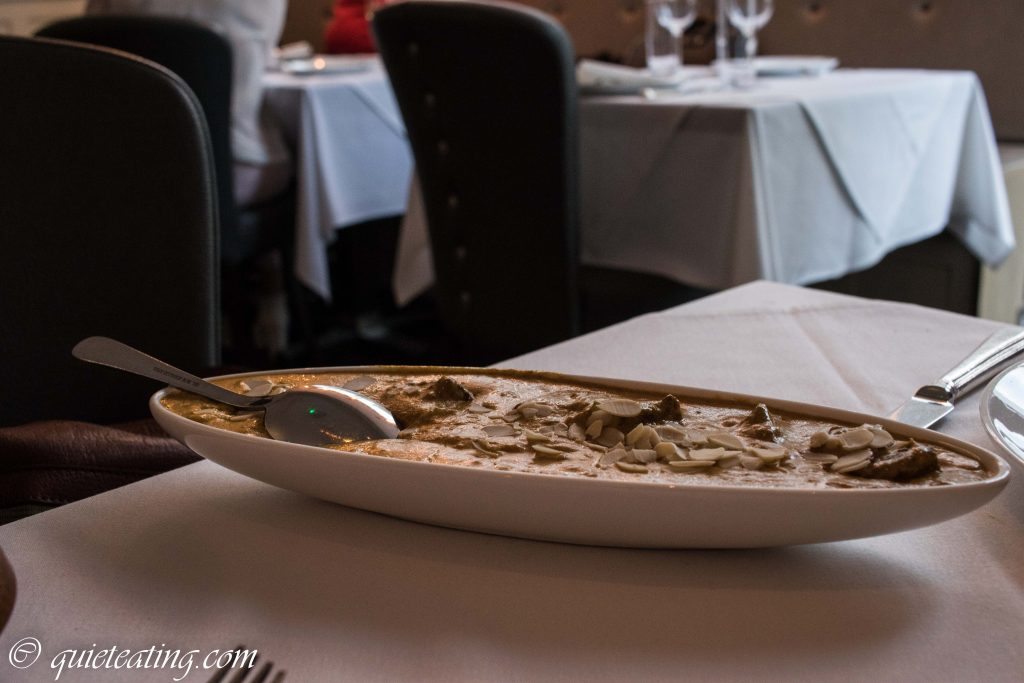 Lamb Korma, Courgette, Almonds, Cashew Nuts.  The kitchen had managed to cook the lamb so it was both not too firm yet not too soft.  As the chef who visited our table explained, these were first grilled until half cooked and then finished in the curry sauce.  Definitely a winning recipe. 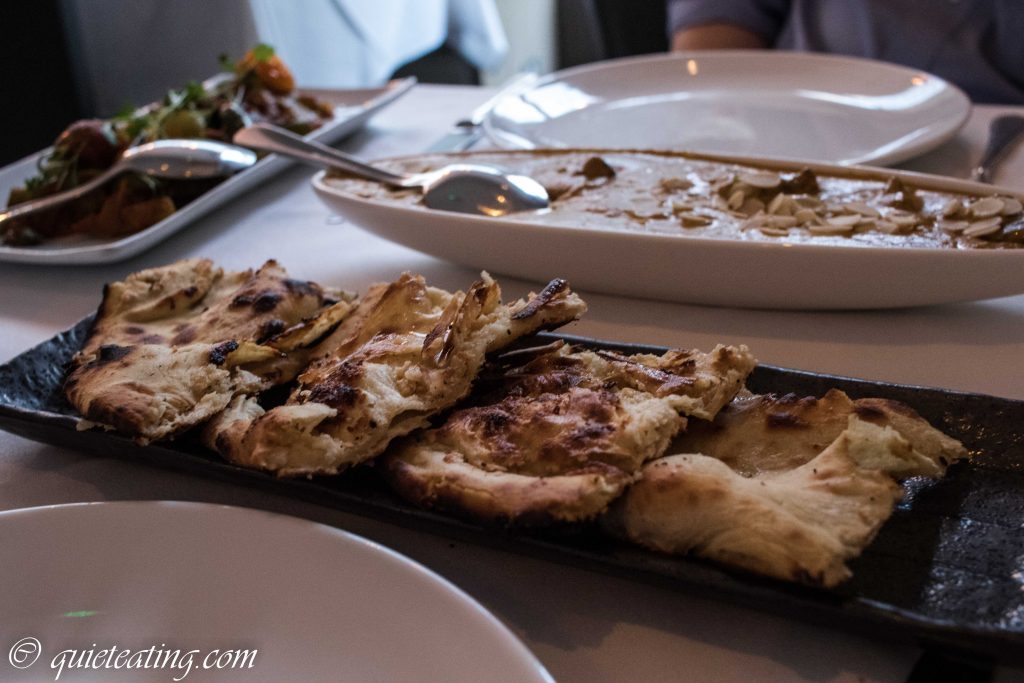 Peshwari naan.  This was some of the best naan I’ve had in London.  Firm yet flaky, slightly scorched yet not incinerated, when combined with the fruit and nut mix inside, these were a definite winner. 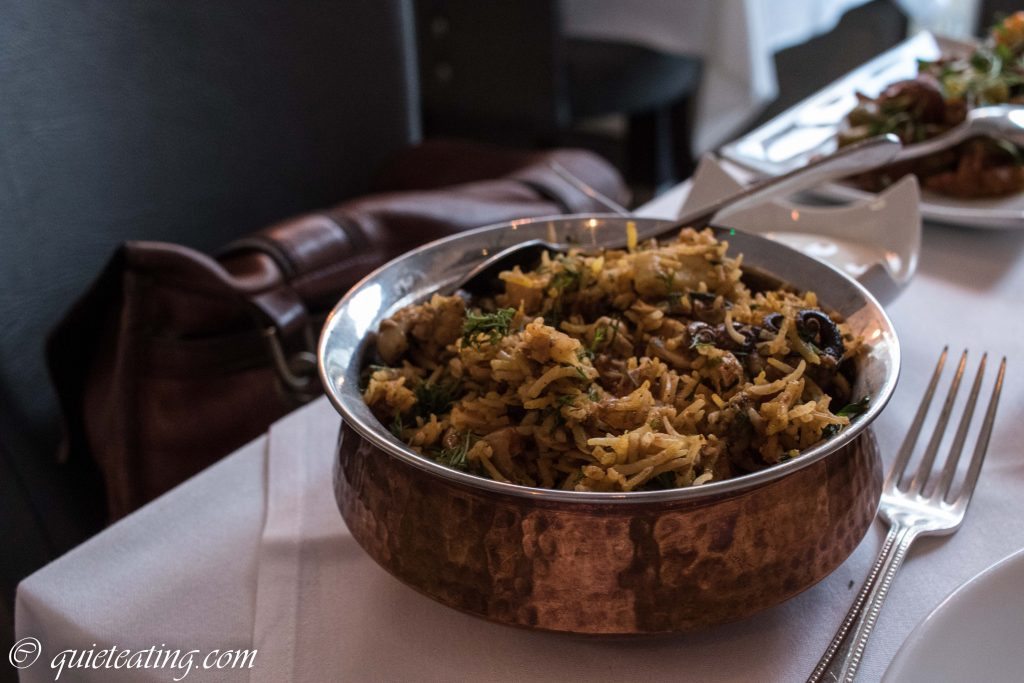 Seafood Biryani, Shrimp, Squid, Clams, Octopodi.  Although this was good, this was the weakest of the main dishes only by comparison.  I thought that the dish could have done with a slightly stronger flavour but perhaps I was spoilt by the excellent preceding dishes. 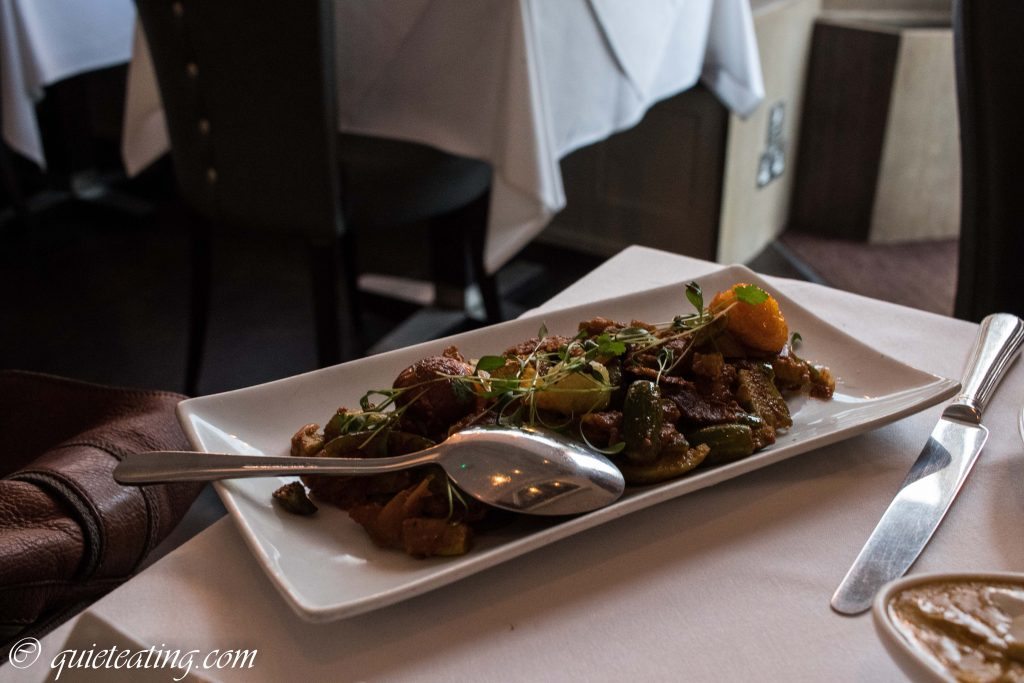 Purple Potato, Ivy Gourd, Red Onions, Baby Tomatoes.  In an attempt to follow what I was always admonished to do, I ordered some greens. Although these were not that particular colour, I contented myself that I can now say I attempted to have a balanced diet.  This dish was decent but again outshone by the other offerings to sit towards the end. 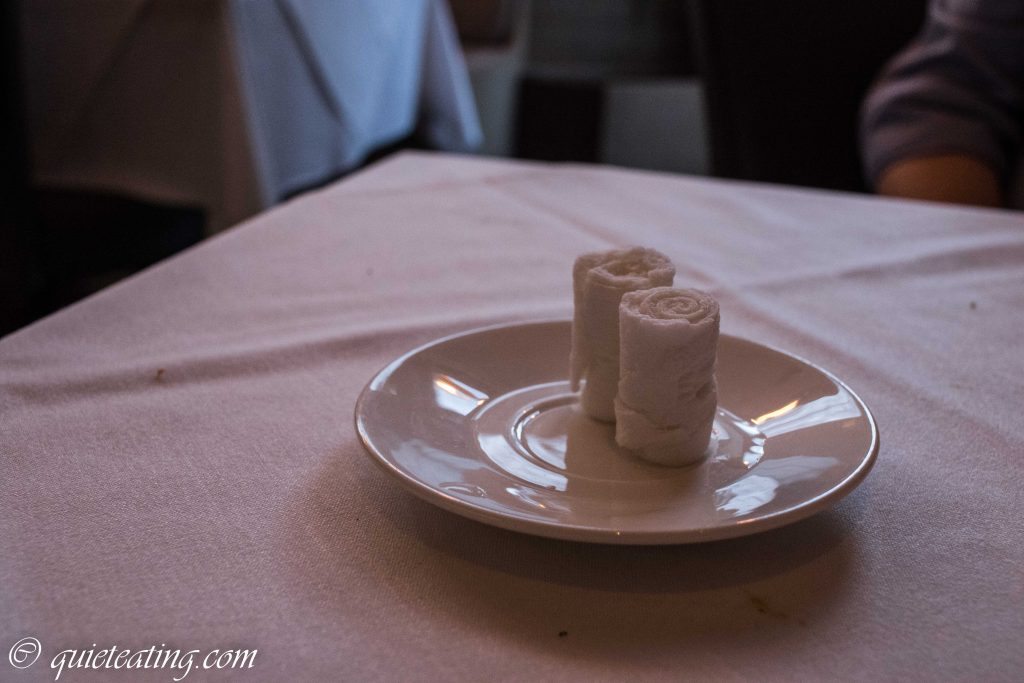 Towels to eat.  A nice little touch were these rising towels.  Starting as little flat discs, with hot water added, these grew into towering pillars. An interesting little touch. 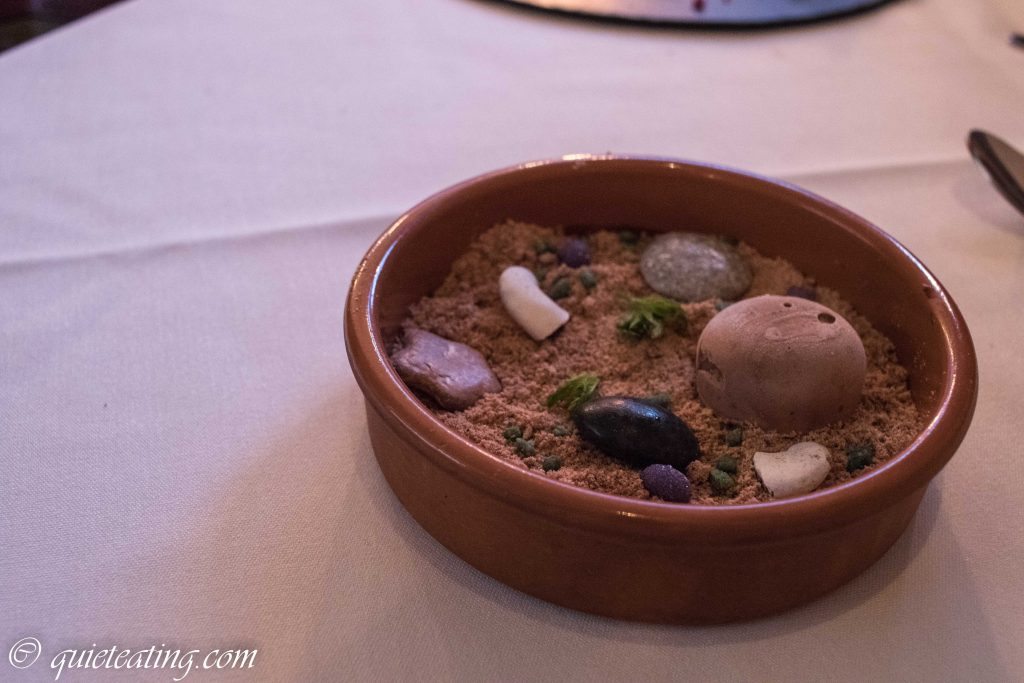 Chocolate Soil, Mint, Chocolate Stones, Ice Cream.  I’m usually above scrabbling around in the mud to find my food but I made an exception here.  Among the various nuts, stones and dirt I found an interesting ice cream.  If my backyard was like this, I could be easily convinced to do a bit more gardening. 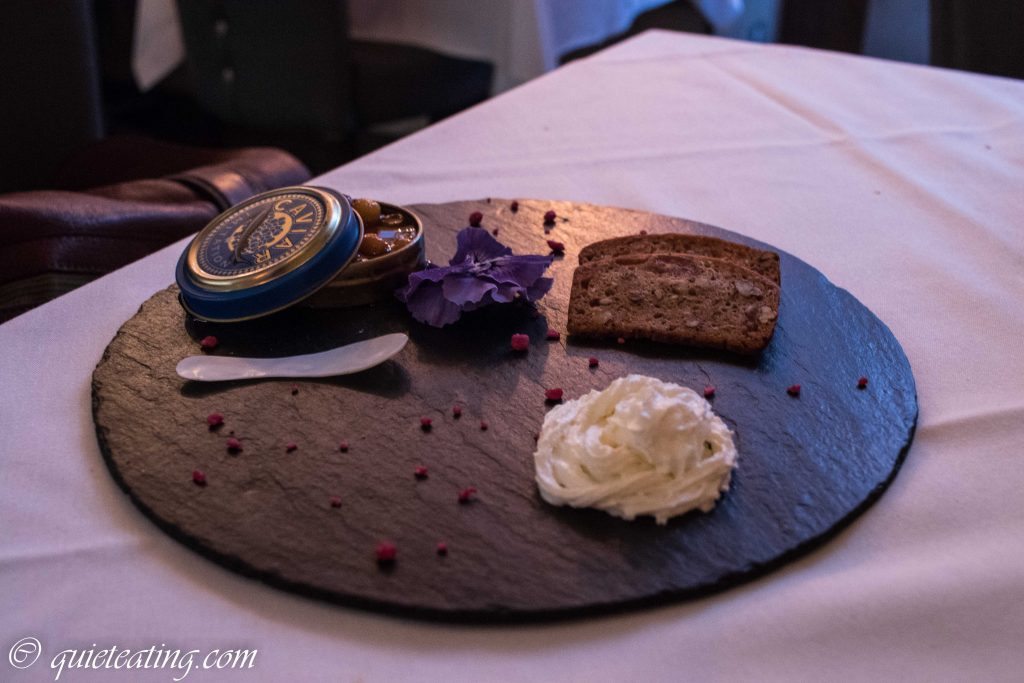 Gulab Jamun Caviar, Pistachio Toast, Cardamom Creme.  Here I must commend the plating of Chakra.  The carefully presented dishes served to show that food IS what you make of it.  The initial impression does count quite a bit, kind of like meeting people for the first time. 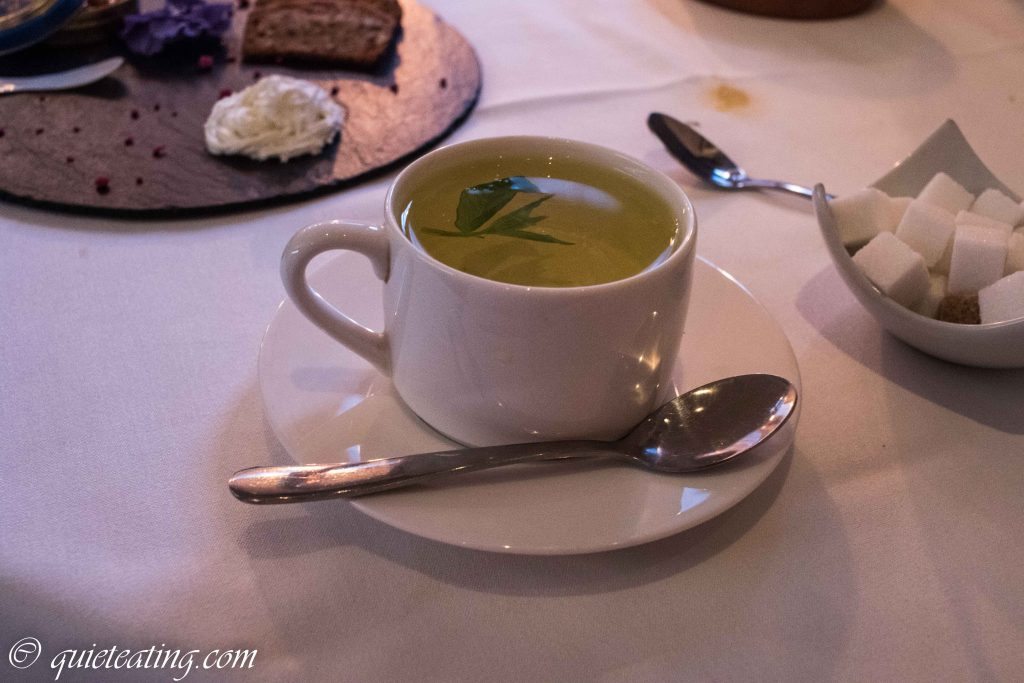 Fresh mint tea.  A cleansing way to end the meal.

I arrived at Chakra imagining a faithful repeat of the last mildly inedible Indian cuisine I had had.  I need not have worried even with my vivid imagination playing tricks on me.  The name “Chakra” brings back memories of Xena Warrior Princess shouting her war cry and striking down her enemies.  Actually, what she uses is a chakram.  Just one more letter, your potato, my potata.  I enjoyed a less exciting dinner than the TV shows of my youth with scrumptious food, a calming and peaceful setting and particularly impressive plating.  I should have walked over to share with the woman at the other table that this was food that I would happily feed to a friend, even on a long long chopstick.

We were invited to review.  Estimated cost (3 courses) excluding drinks and service is GBP30.