Great things have come out of America such as the telephone, the popcorn maker and the inflatable tank.  Yet there are those consigned to the annals of history in an altogether different light, Agent Orange, asbestos and the Hula Chair.  In an era where it seems that building a wall to keep the undesirables out seems the politically expedient thing to do, it is refreshing to see those whose company is happily looking beyond their shores.  Amazon and Apple being the ones that most readily spring to mind.

Wing Zone is an attempt to do the same for chicken wings.  It seems that they are part of the second wave of American food imperialism.  First there was McDonalds, Burger King, Pizza Hut and finally the haloed KFC.  Then there was the more upmarket variants following a couple of decades later.  Five Guys, Shake Shack and the like.  The next niche to target was wings.  Obviously.

As part of the great publicity, I learnt about National Wing Day from Wing Zone.  Kind of reminds me of National Mop Day.  Cleaning up the dregs of the nation.

With such delectable flavours as Garlic Parm, Honey Q, Sweet Samurai and Nuclear Habenero, my mouth was watering already.  Now to see if my salivating was justified. 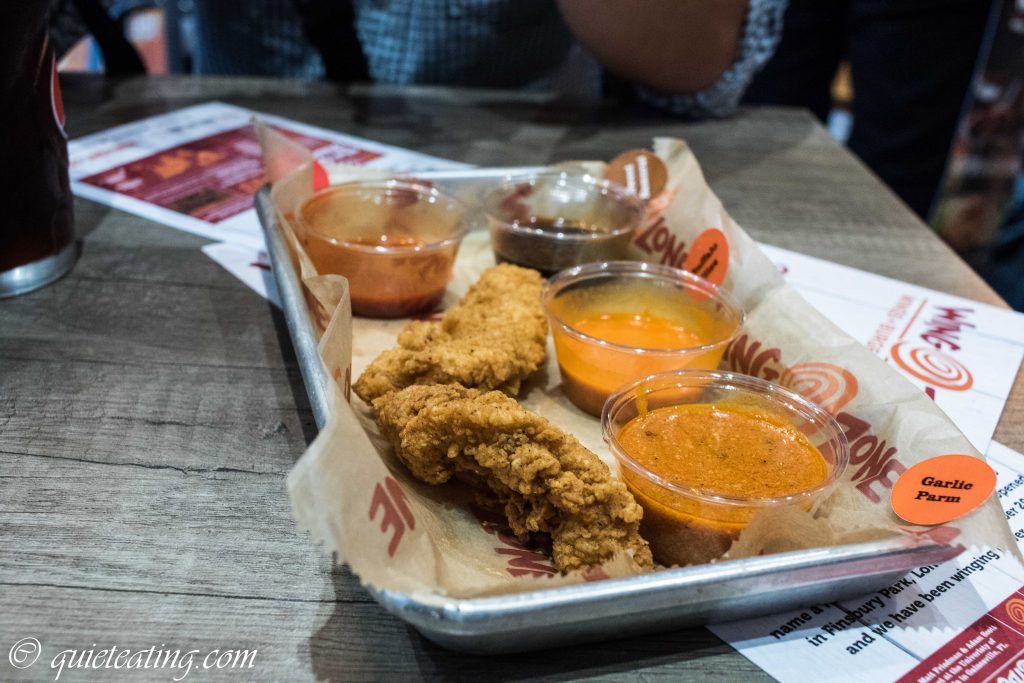 Chicken tenders.  With Garlic Parm, Hot Shot, Buffalo Bliss and Sweet Samurai sauces.  A gentle little introduction to 4 of the flavours on offer.  The tenders were ok although a bit dry, probably because these were breast meat.  Healthy but lacking in moisture retaining fat, unlike wings.  Guess you can’t have it all.  Regarding the sauces, I found the Hot Shot to be rather fiery but consisting mainly of burning heat.  The Garlic Parm was my favourite, a garlic taste without being overpowering.  Buffalo Bliss made me think of wings I have had, ok but nothing special.  The Sweet Samurai tasted very much like what a westerner would think of Japanese sauces.  Just colour it black and heap the salt.  Not really for me. 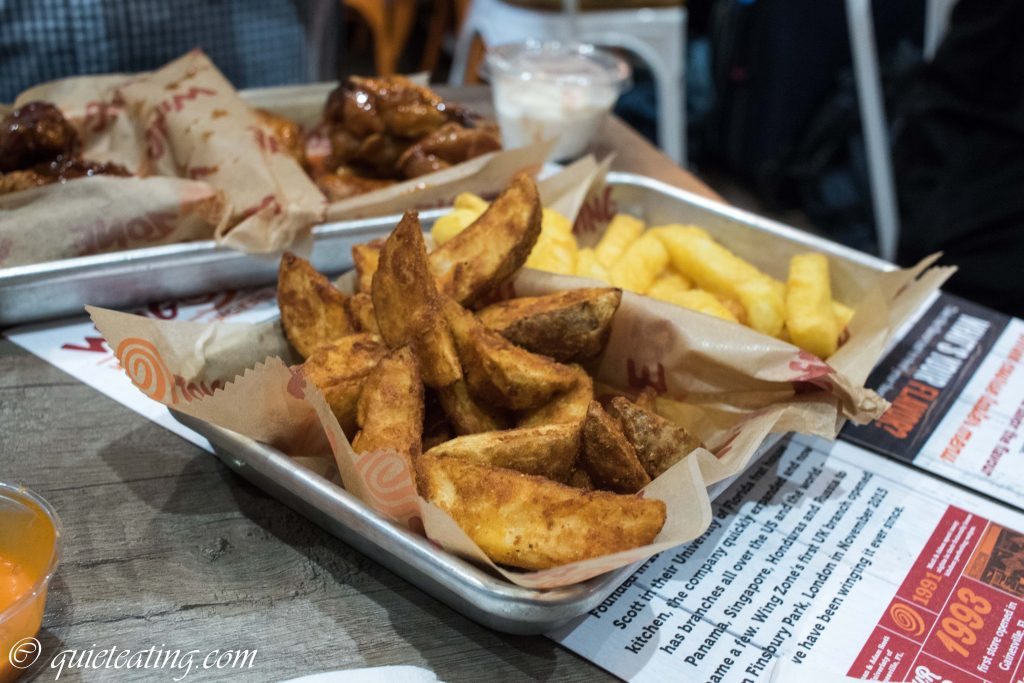 Wedges and chips.  These were great to dip into the sauces, to savour a bit more of the flavours. 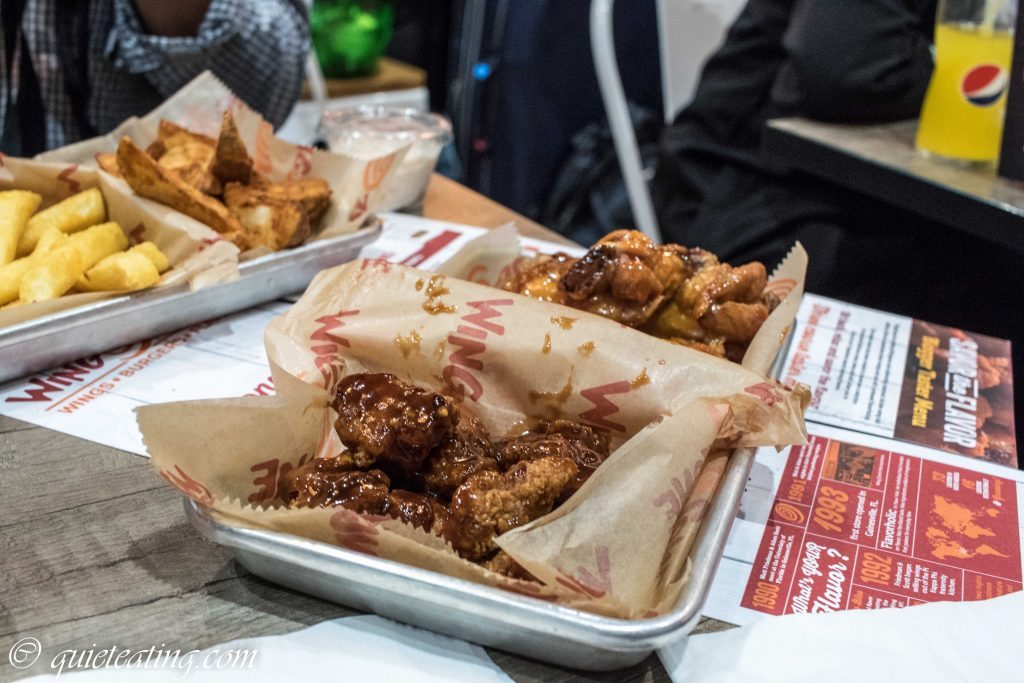 Wings with Sweet Samurai sauce.  The wings were unfortunately cold…  Although I have to give them a bit of leeway here as they were packed to the rafters and the kitchen was obviously doing double time.  I think I spied someone in the corner sitting on another person’s shoulders.  As a result of too few cooks, too many orders, cold wings with sweet and sticky sauce did not go together that well. 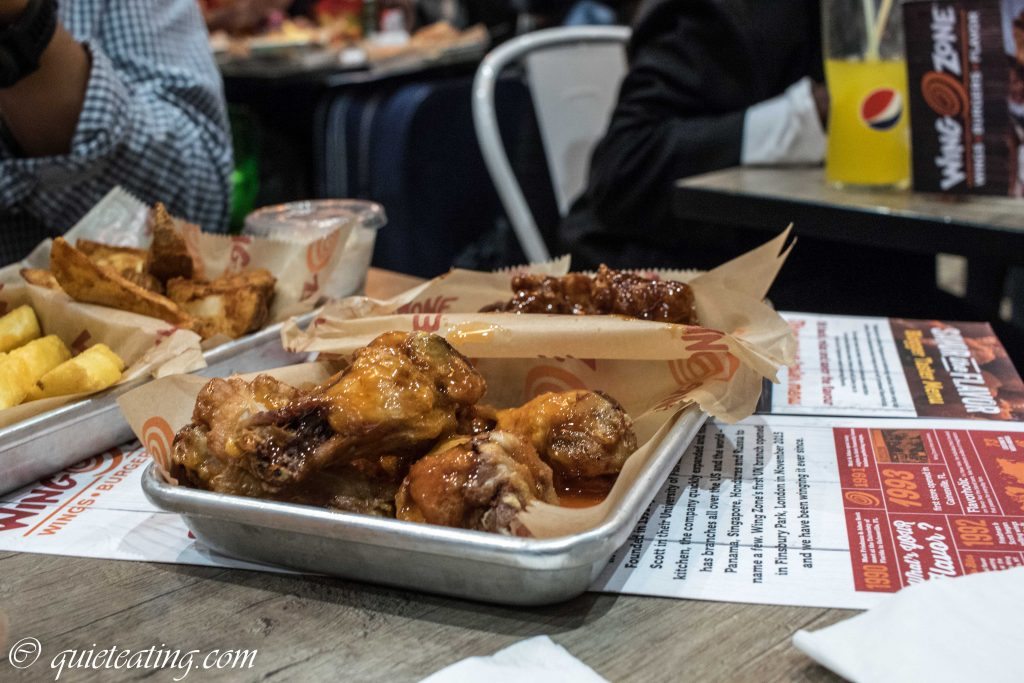 Wings with Thai Chili sauce.  Ignoring the lukewarm meat, this tasted as I expected Thai food would taste, with a sharp taste of chili to start.  I love this when added to crisps.  I have been known to finish an entire big bag by myself if not watched carefully.  I savoured this fiery element basking in the heat for several seconds.  Except, the pain did not go away.  Instead, it endured for minutes.  Probably a bad choice in hindsight. 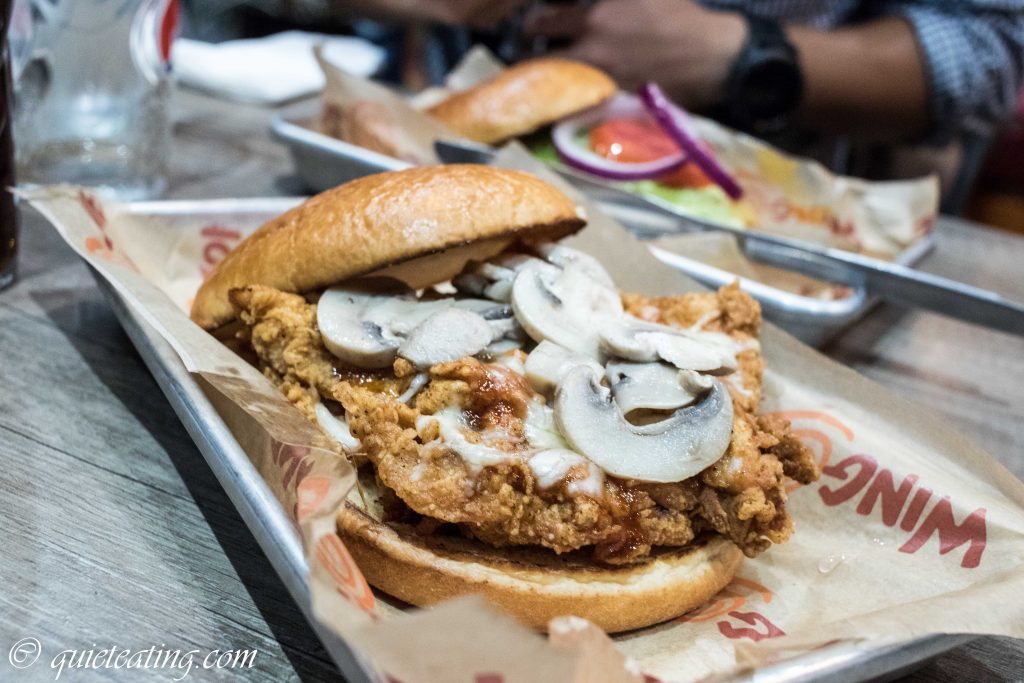 Bread chicken with mushrooms and cheddar on a bun.  I applaud the lack of oil on the chicken.   Not so much the lack of taste.  This vaguely reminded me of eating deep fried cardboard. 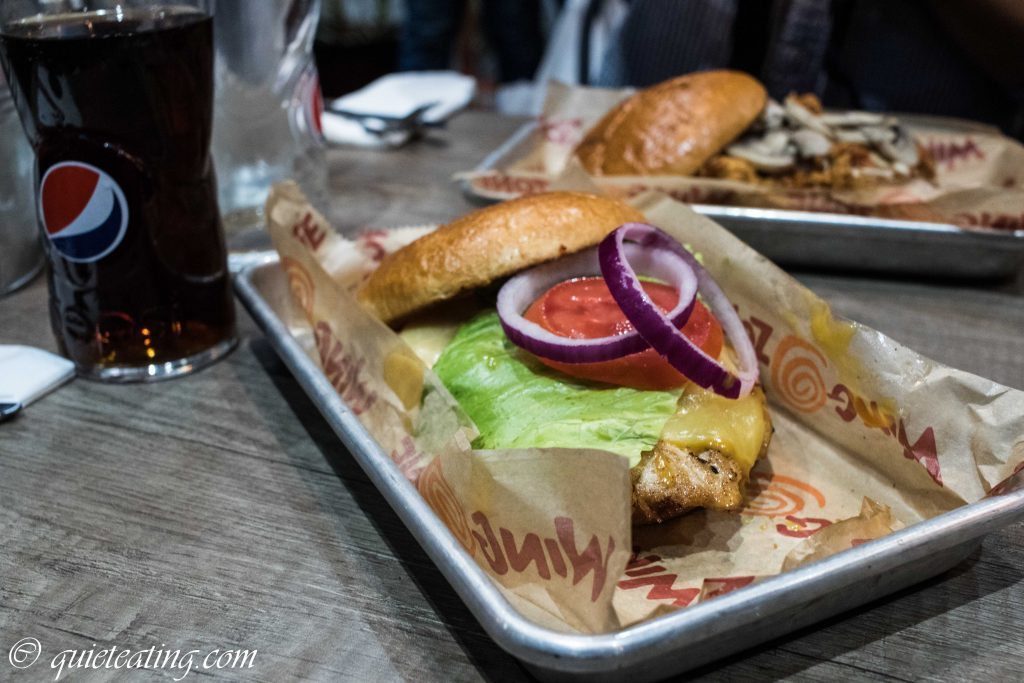 Grilled chicken with lettuce, tomato, onion and cheddar cheese.  The chicken breast through its grilling process seemed to have unfortunately had the taste broiled out of it.  The tomatoes, lettuce, onions and cheese tried to come to the rescue but it was too late.  I guess once you cross a certain line you can’t bring things back to life.

With a queue going out the door for the full 2 hours we were there, they obviously have their own massive fan club.  I clearly chose the wrong sauces and that is entirely my own fault.  Even though I could try and make an argument that it was all due to my fellow diner’s indecisiveness that led to these wrong choices.  Perhaps if I had chosen right, the experience would have been that much better.  Unfortunately for my discerning (others would say fussy) tongue, things did not play out that well for me.  Should have gone to KFC.

We were invited to review.  Estimated cost (wings and sides) is GBP10 excluding drinks and service.

Addendum: Following this rather lackluster affair, we were invited back to put things right.  The below is a brief outline of our re-experience.

Unburdened by the ravenous rabid crowd on National Wings Day, we were treated to a more sedate affair.  Among these calmer settings we were able to sample their desserts.  Good thing too.  First though we would need to re-live our wings experience. 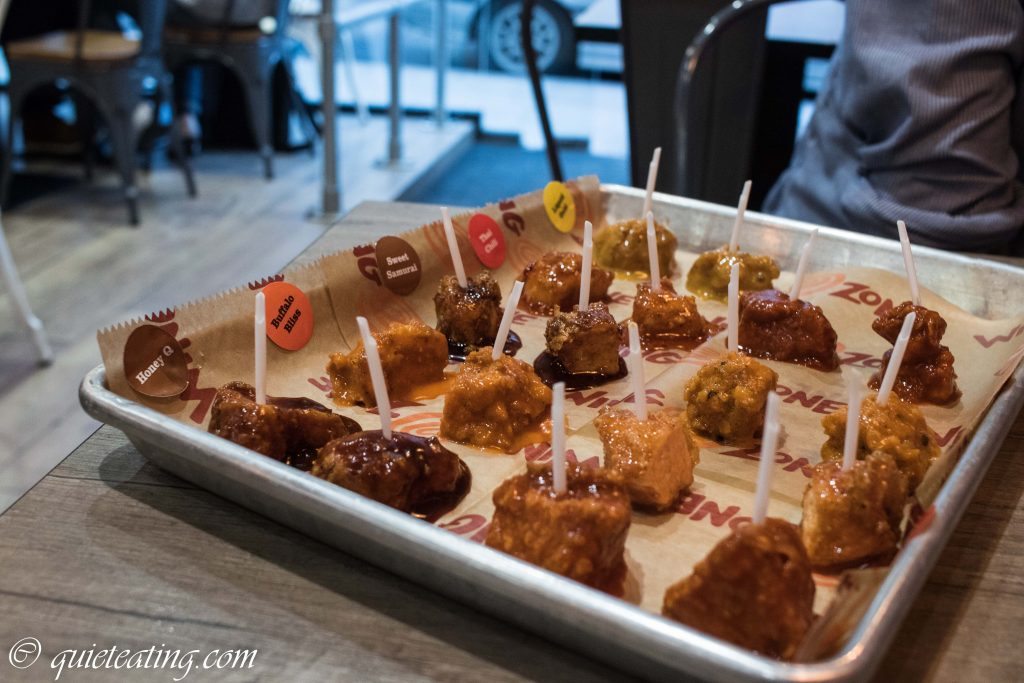 A delicate tray of all their flavours neatly laid out.  A far more interesting experience here with all 9 flavours to try in quick succession.  We started with the mild flavours and built up towards the nuclear habanero.  We found that the milder flavours were more enjoyable rather than the blow-your-pants off sauces.  Maybe it is just some type of simpering cowardice on my behalf but I prefer to see the food I eat.  Such a situation is impeded if you go straight for the top of the spiciness chart.  Things got a bit watery even 5 minutes after the nuclear meltdown.  Should have taken it slow. 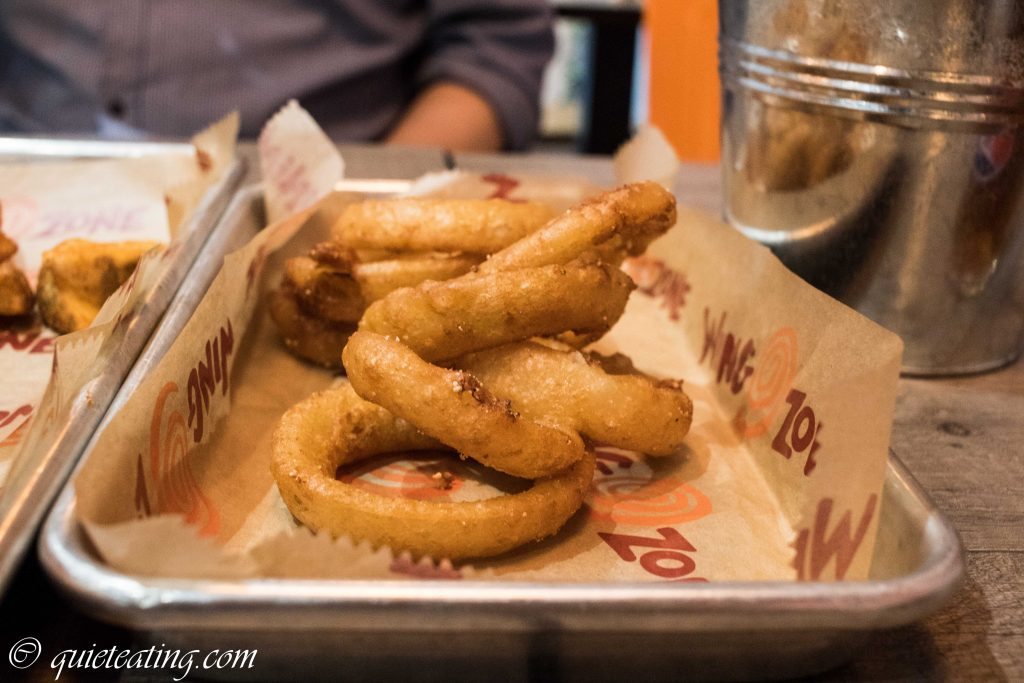 A little something different to try.  Onions rings.  Ok but rather ordinary. 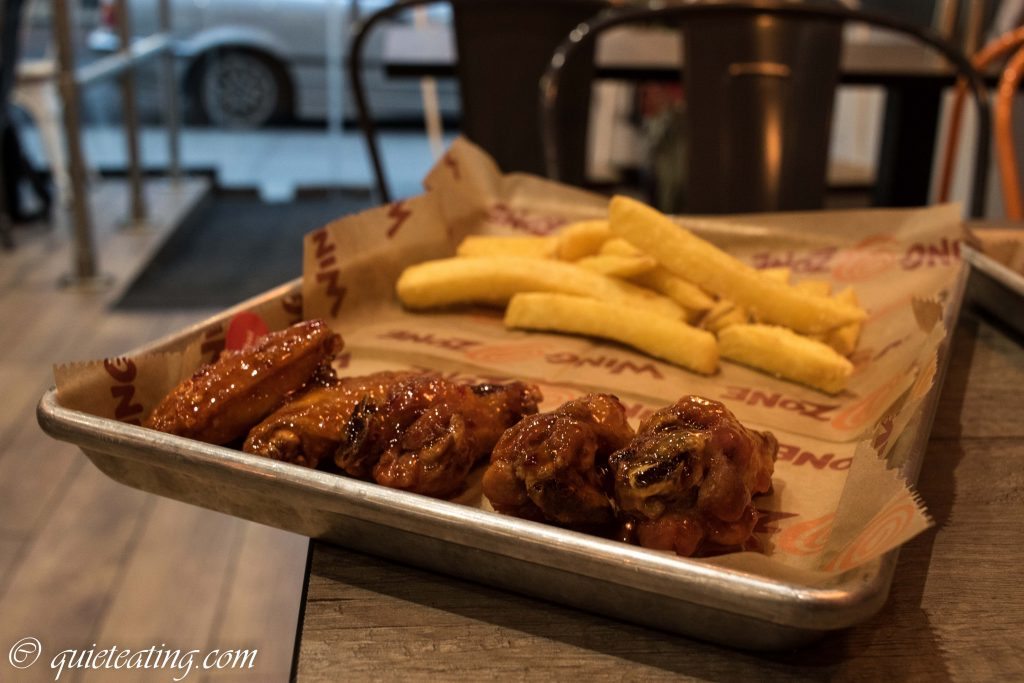 We went to try the wings again.  The correct temperature seems to make things taste just that much much better.  Rather than eating cold, stale cardboard with dusting of some type of unidentifiable sauce, instead we were treated to proper wings, here with the Sweet Samurai sauce.  Infinitely better, these were were a crowd winning combination of sweet and savoury. 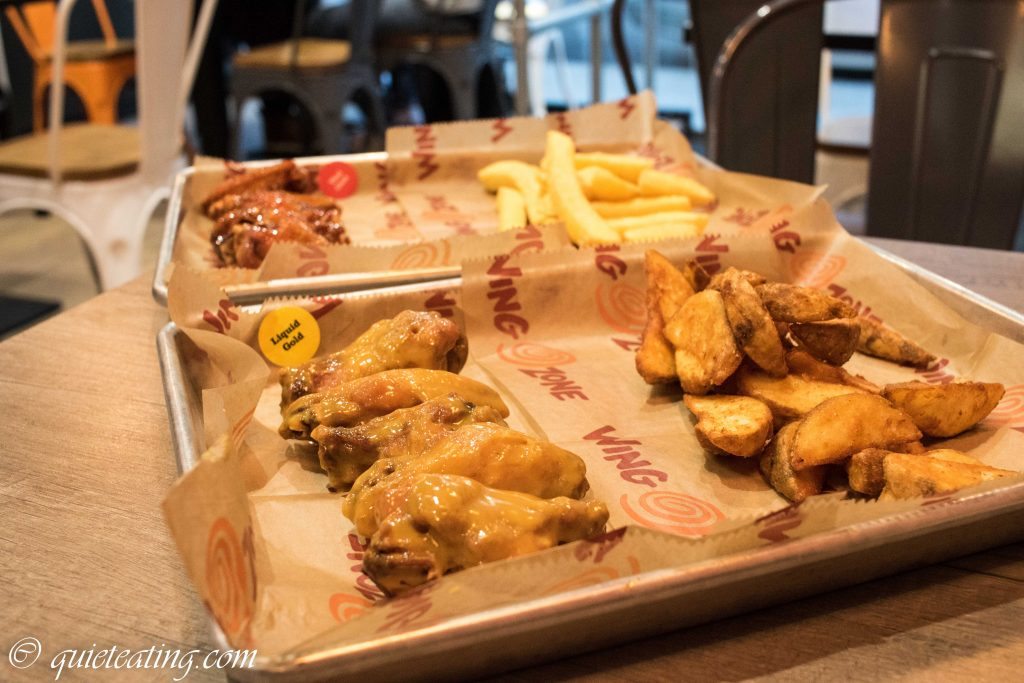 The same wings instead with the Liquid Gold.  The mild version went well.  Although maybe I preferred this by contrast given the recent sharp tongued nature of the office colleagues.  The fries and wedges were not bad too .  Nicely crisped and missing most of the oil, these added welcome bulk to our meal. 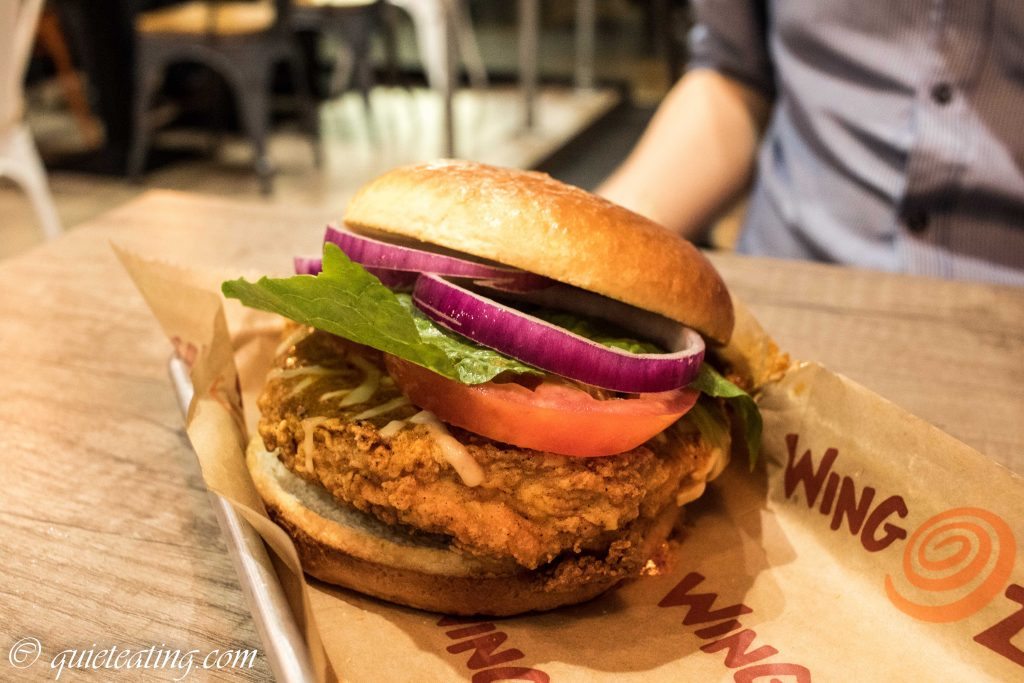 The customisable chicken burger with cheddar cheese, onion, tomato and lettuce.  Ok, although a bit dry.  It just didn’t really have that much taste.  We should have opted for a flavour topping but in our ignorance we decided to go for the virgin version.  Should have gone for something more. 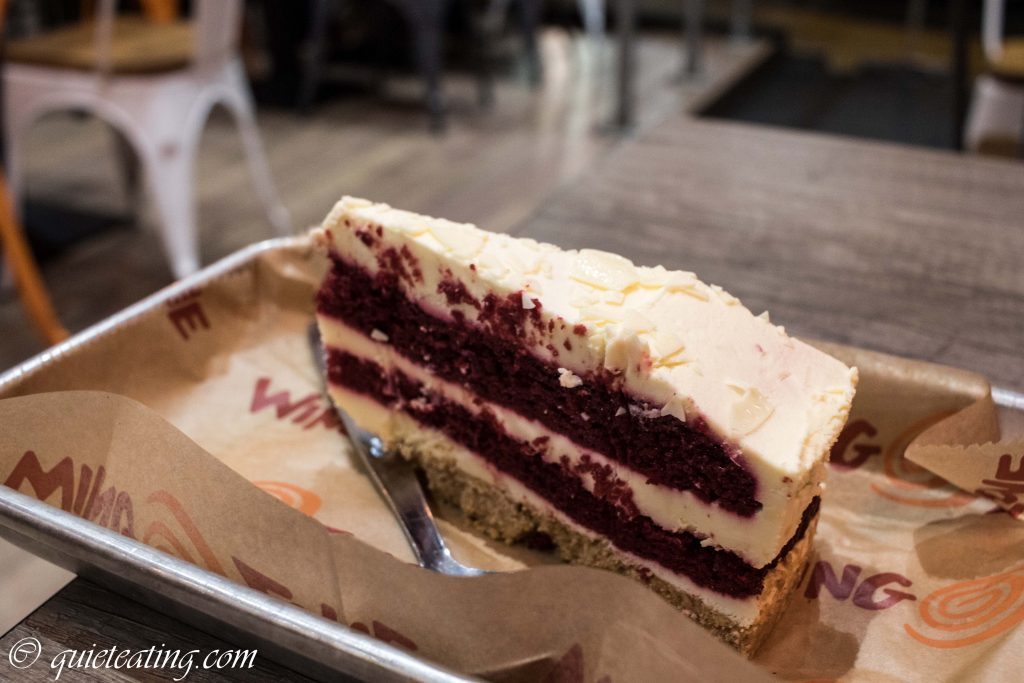 Red velvet cheesecake.  Quite good, the icing managed to avoid overpowering the sponge layer inside.  Definitely something to try again. 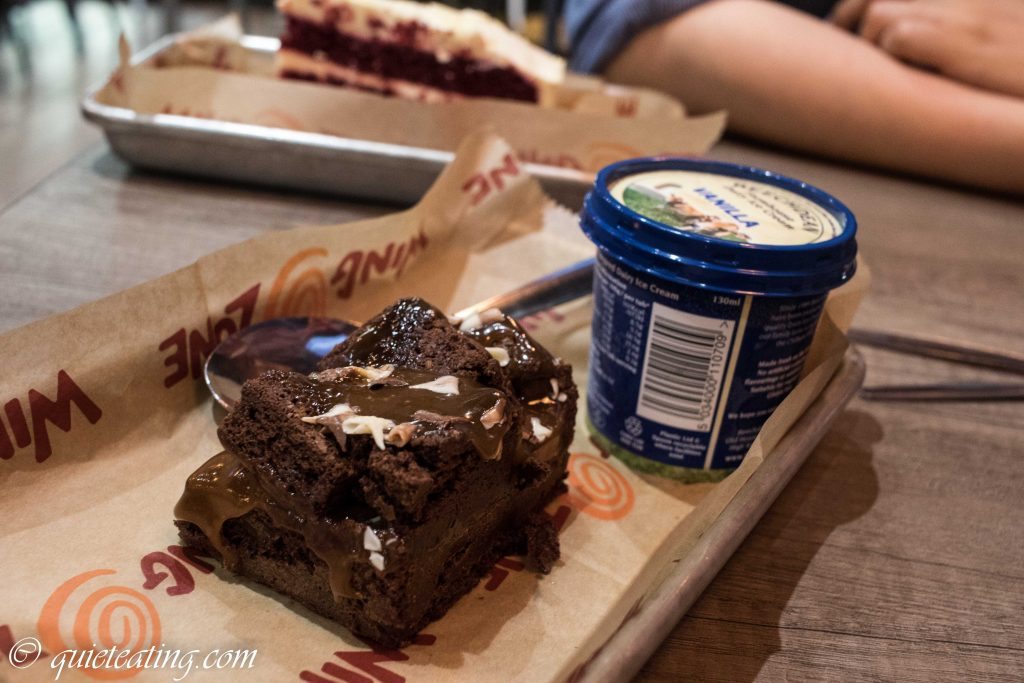 Salted caramel brownie with vanilla ice cream.  I would say that this stole the show but that would be a cliche.  I always wondered how a circus act could be stolen.  It would take a rather determined and imaginative thief to steal away with the entire ensemble, audience and all. Instead, it is more like a massive tornado descending and hoovering up the tent, participants, spectators and performing animals.  It really was that good to wipe the slate clean.

I’m glad that we gave Wing Zone a second chance.  I could say third time’s the charm but instead it seemed that on the second attempt, they hit the bull’s eye.  Although rather ironically it was not so much the wings and chicken which made the day but a humble brownie.

We were re-invited to review.  Estimated cost (wings, burgers, sides and desserts) is GBP15 excluding drinks and service