Yosma.  Sounds like a type of vulgarity. You Yosma.  How could you be so Yosma.

Actually, it seems that the real meaning is far more mundane.  It’s a Turkish name. So anyhow, with such angst unloaded, it was time to try the food.  In rather hip and trendy Baker Street, this rather large restaurant concentrates on Turkish food. Having been over to Turkey myself, there is definitely more to the eastern life than kebabs.  Well, I hoped at least that Yosma would remind me of food-filled days visiting Istanbul. 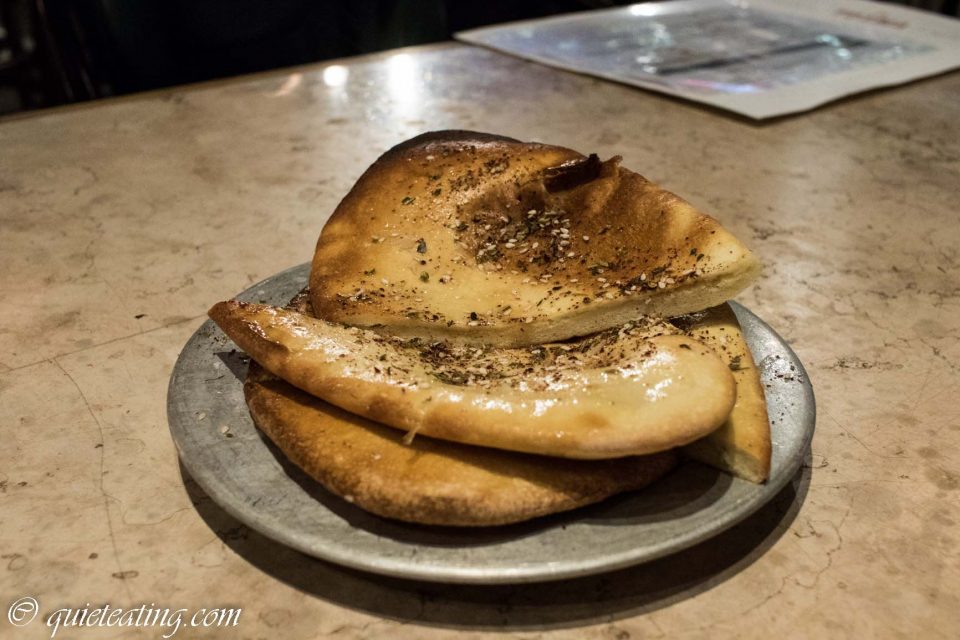 Flat bread, clay oven fired bake flat bread, lamb fat, za’atar.  Sounded interesting and looked good.  I eagerly took a piece to try.  Yet I soon found myself on the receiving end of disappointment.  These seemed akin to some road work that I had seen outside. Sawing mightily on this bread, it dawned on me that maybe this was where the pavement concrete came from, it was kind of hard to break.  Even after heroically hacking at this and so ripping off a size that would fit my mouth, I was to be disappointed not only by the texture but the taste as well.  It was as insipid as I guessed concrete would be. Actually, I think that concrete would taste of rocks and gravel and such. This flatbread just tasted of nothing. 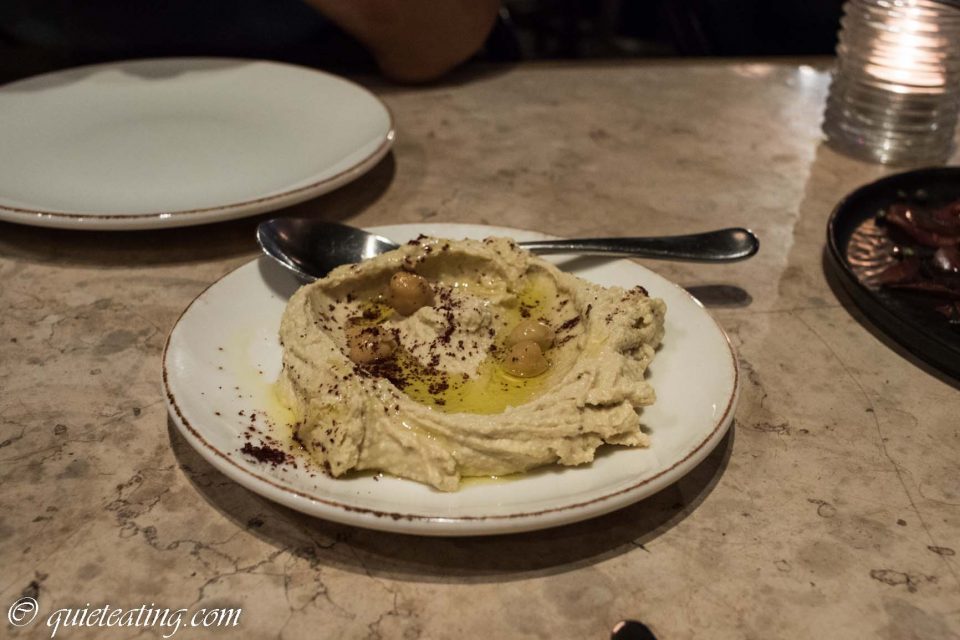 Hummus, chickpea puree, tahini, lemon and garlic.  Ok.  At least the texture of this dish was more welcoming.  Even if it was rather ordinary, it was at least something to rejoice in the context of the otherwise bland bread. 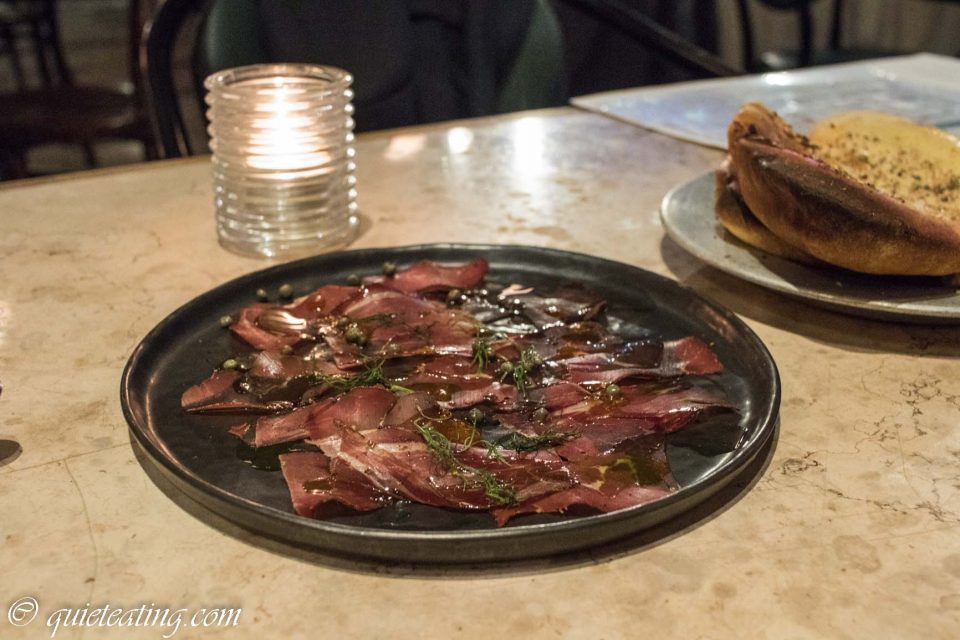 Pastirma, cured beef, cemen, caper leaves and fennel tops.  This was probably one of the better dishes of the night.  Although, it brought to mind a comment I had made at a friend’s dinner party.  He had slaved away at the kitchen for hours to present a lavish meal.  This particular friend is rather prickly, so when we retired for the after dinner, cheese and biscuits, he hungrily asked for feedback on how the meal went.  I said the cheese was good.

This was the same. I guess that as it was mostly prepared elsewhere, it was not bad. Nicely laid out from the packet. Bravo. A particularly artful arrangement. 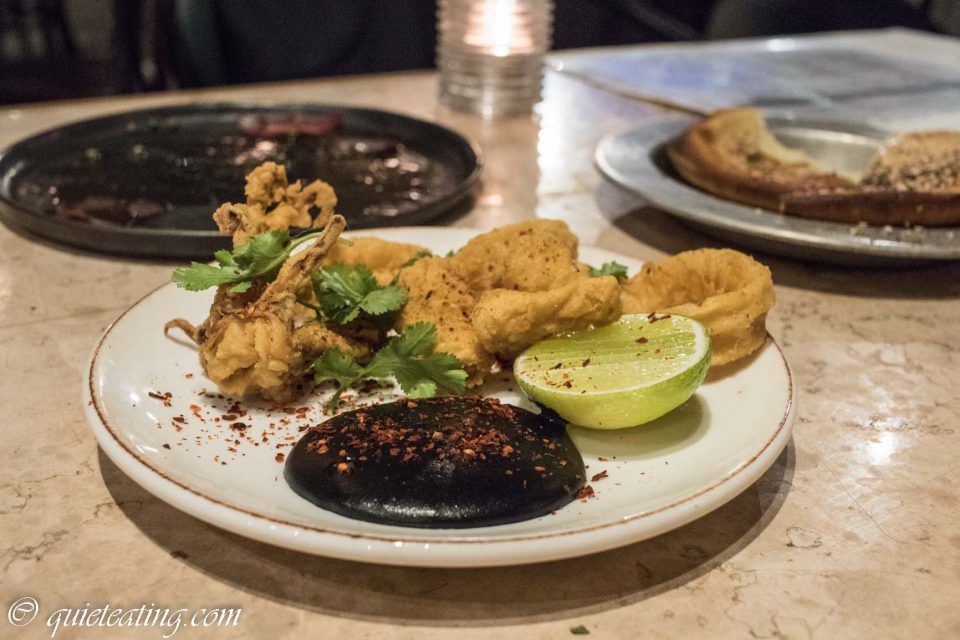 Kalamar tava, chickpea flour fried calamari, squid ink tartar, lime and pul biber.  A bit too oily.  Probably the best dish of the day.  Although it is generally hard to go wrong with deep fried food.  It did taste slightly rancid though, a bit like maybe the oil had been too many times through the fryer. 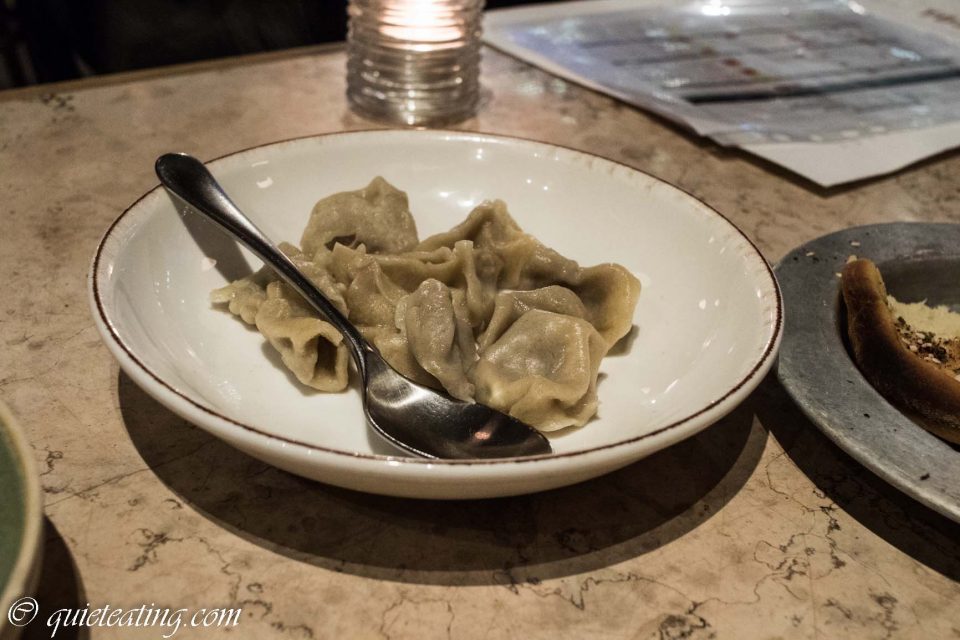 Manti, Turkish dumplings, stuffed with lamb neck, yoghurt sauce, chilli oil and mint. At least these weren’t hard and the dough was not bad. The only problem was, there was too much of it. Kind of hard to find the meat hidden inside. Could have been so much better. 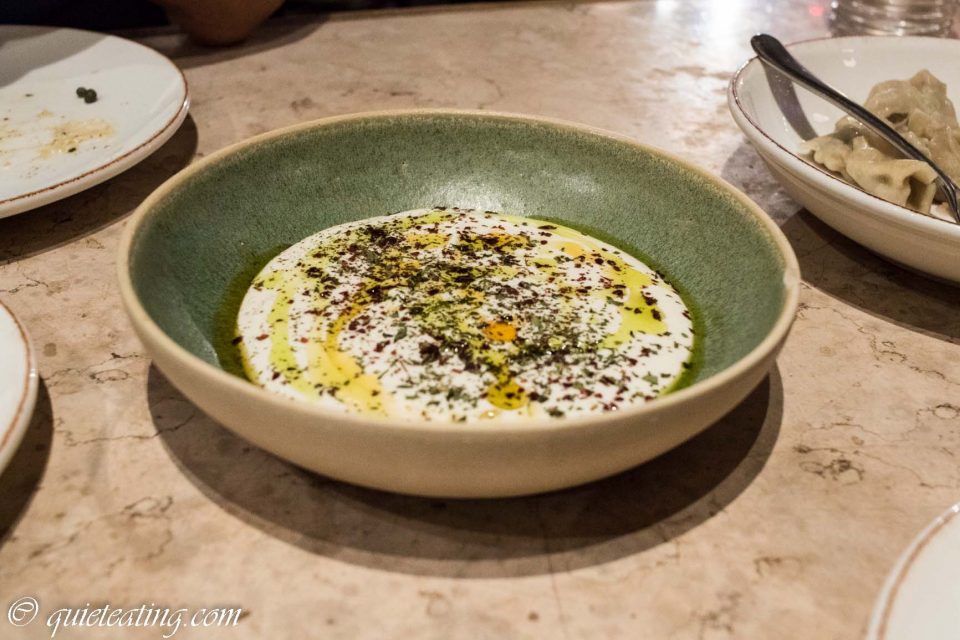 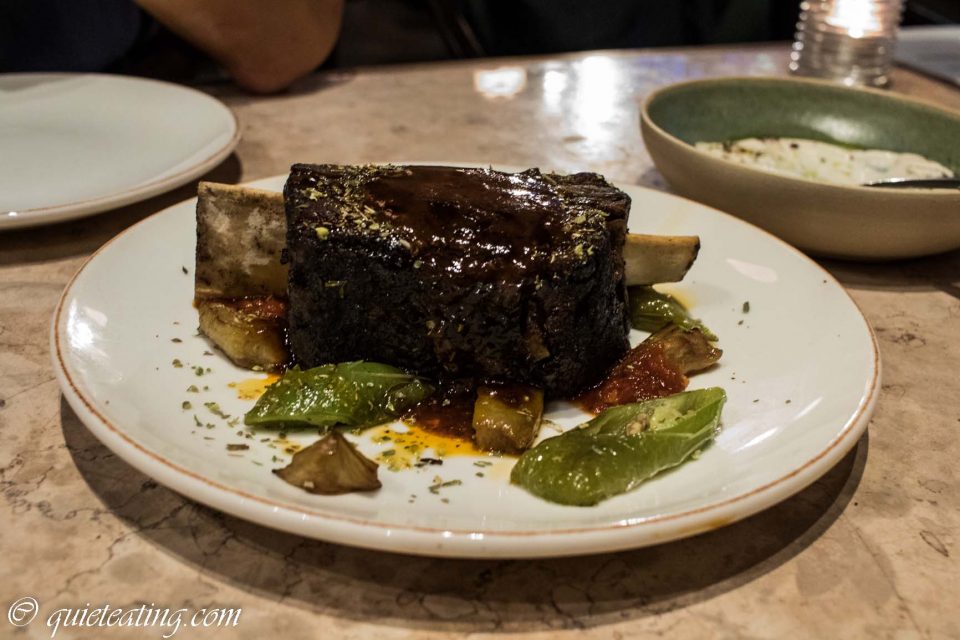 Dana karaburga, short rib of beef, tomato, aubergine, peppers and yogurt. Particularly salivating to look at. Particularly disappointing to eat.  It tasted as if it was leeched of flavour. A particular feat. The meaty texture was good though. 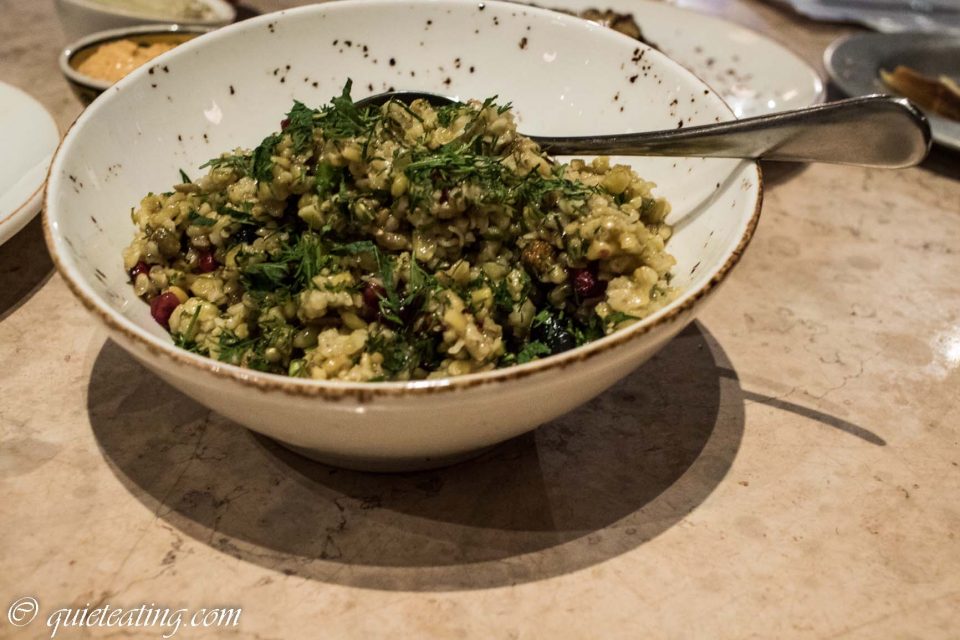 Firik salata, freekeh salad, spring onion, dill, pomegranate and blueberries.  An interesting salad, I quite enjoyed this.  A mix of textures, tartness and sweetness, it was a welcome way to offset the otherwise bland meal.  I only hoped that other dishes could be prepared in the same way. 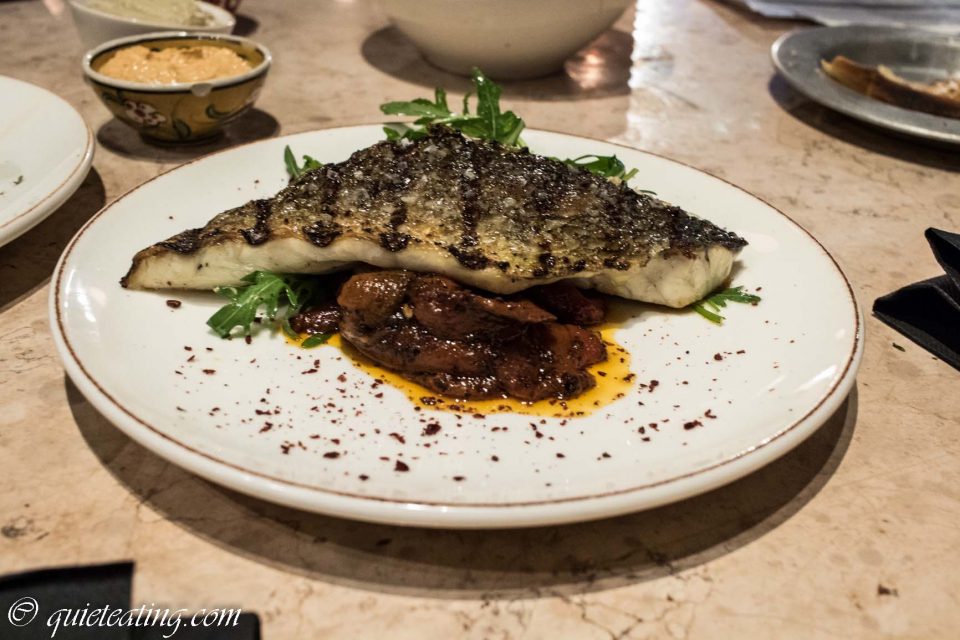 Stone bass, mangal roasted red peppers, spicy cemen yogurt and lemon dressed rokka.  A definite step up from the cow, the fish went to the other extreme.  Too heavily salted, the dish was over-zealously spiced, overpowering the delicate flesh of the fish. 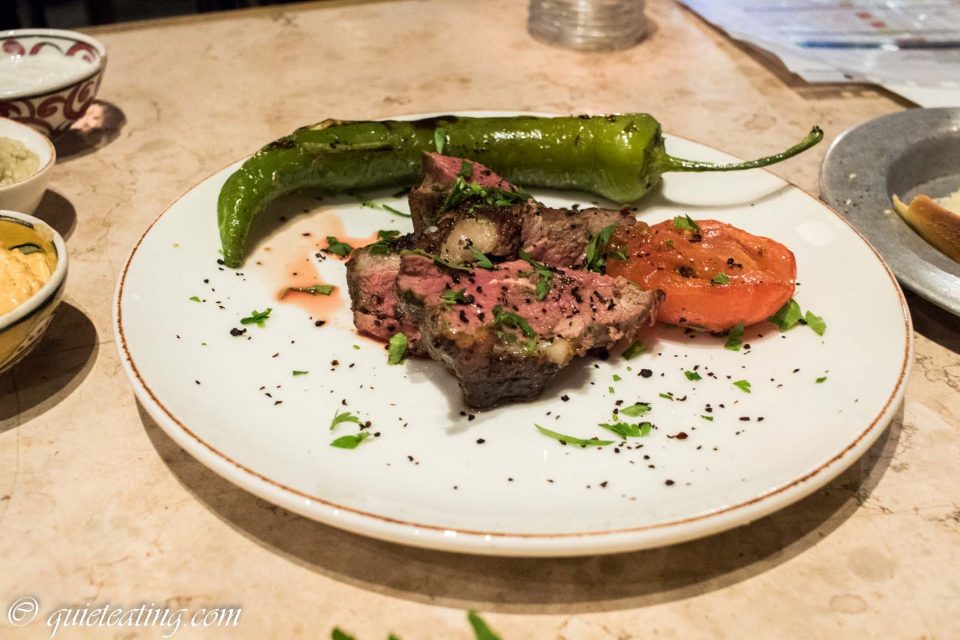 Ali nazik, lamb rump, oak fired aubergine, yogurt and burnt tomato. With such experiences behind us, I only expected the worst with this last dish. Yet it was to be the best of the lot. Tender, spiced just right and pink in the middle, this showed what lamb could be in all its Turkish glory.

What is there in a name?  Actually quite a lot, as my ungentle treatment of Foley’s folly goes to show.  I did add a word to my vocabulary that night in trade for some enjoyment.  So I guess the next question that springs to mind is which is worse.  In the race to the bottom, Yosma doesn’t quite edge ahead.  What it does do, is teach me something new.  So next time I come across an uninspired, banal and dull restaurant, I could save myself some words.  And just call it another Yosma.

Dinner (all of the above shared by 3) was GBP35 excluding service and drinks.