Foley’s Folly.  At least that is what I couldn’t help but think of every time I heard the word “Foley”.  I know that it is a rarely used word and most people would rather use its more commonplace synonym but I love words too much.  When my friends complain about my use of needlessly complicated and obscure terminology, I try to tell them that excessive reiteration of words dull their impact.  Another justification for use of uncommon syntax was to prevent my writing from seeming rather boring.  So instead, I try to liven up my discourse by use of a varied vocabulary of negative adjectives.  Idiotic, pedantic, imbecilic, nonsensical, senseless, moronic would all spring readily to my mind when others might use a more straightforward word in exasperation with me.  Although I guess you could just say that sometimes things seem very very stupidly stupid.

In any case, I hope that you manage to obtain some degree of amusement from my writing when things don’t seem to work out as I would otherwise wish.  My forlorn hope was that Foley’s would not be such a case.  Yet we got off to a rocky start.  Not so much by bad service but the absence of such.  So much so that I had to get up and walk over to the waiter playing with his phone to order.  A bit of a strange but necessary action given that my friend and I were the only diners present. 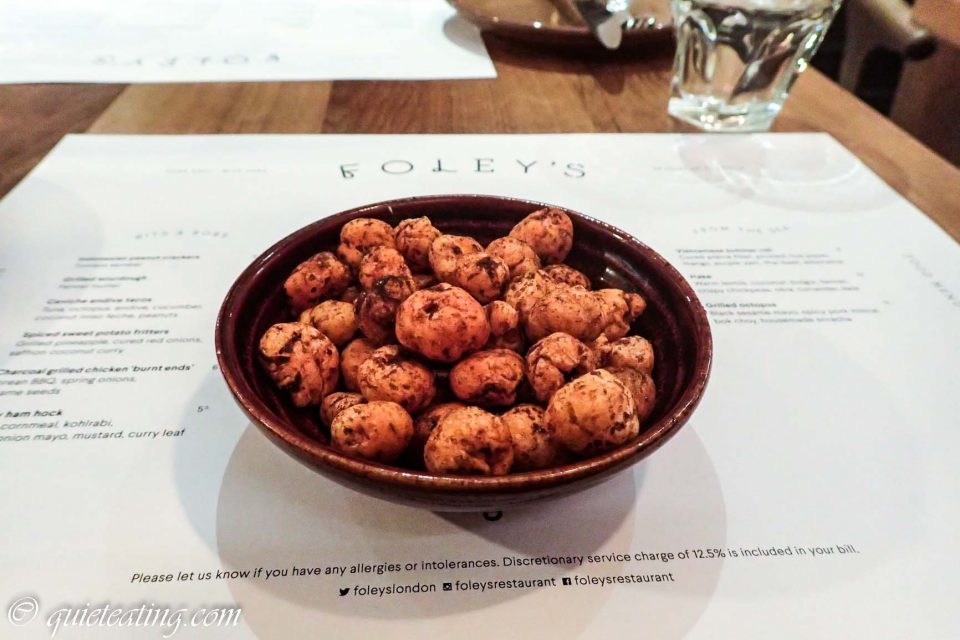 Lentil seeds.  Light and bursting with flavour, these boded well and I was maybe subject to some misleading signals here.  Signs that maybe the food would be a thoroughly pleasant affair. 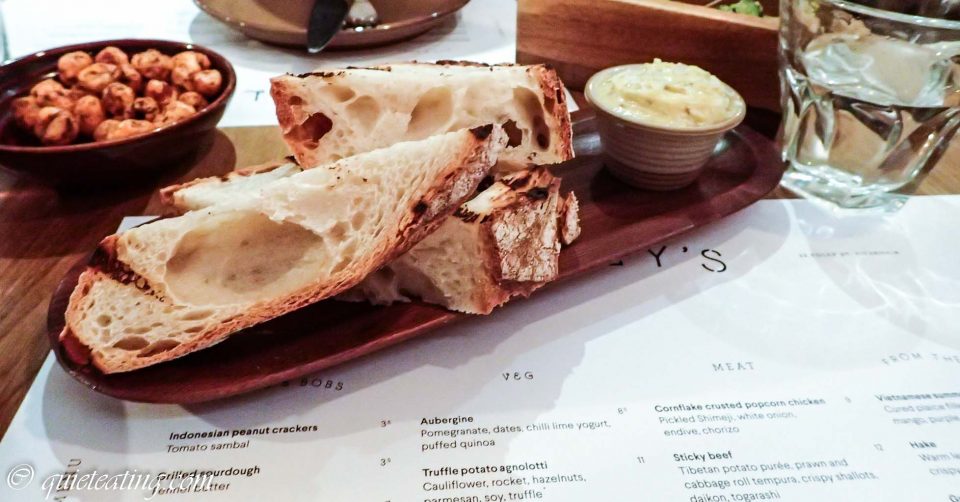 Sourdough with fennel butter.  Sadly, just ordinary, the butter failed to lift this dish up.  For the price (I can’t remember the last time I had to pay for bread), I expected more.  It wasn’t bad, just something that you could get from the higher end of the local supermarket’s bakery offering with not merely as much capital expenditure. 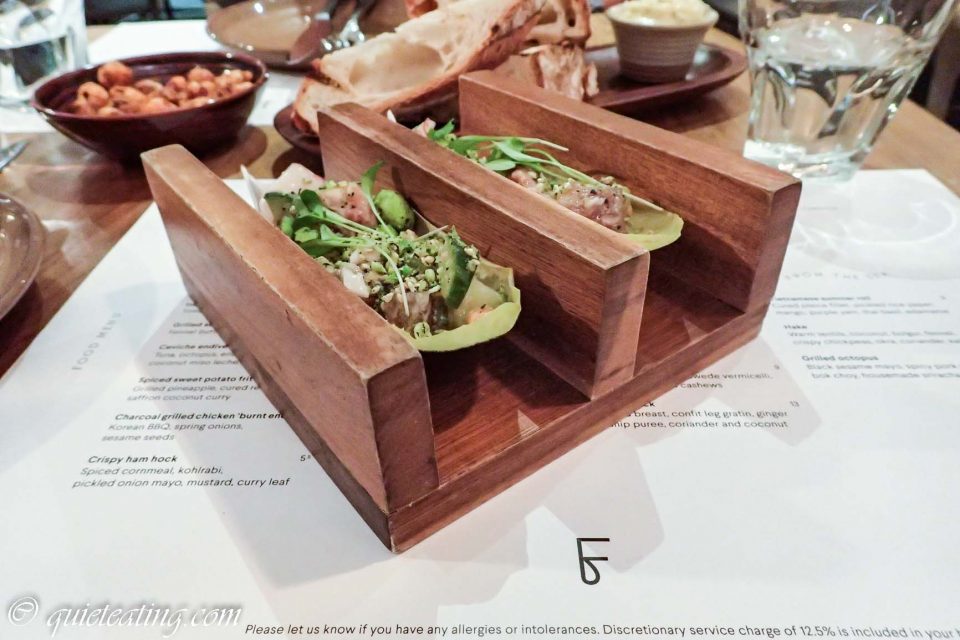 Ceviche endive tacos, tuna, octopus, endive, cucumber, coconut miso leche and peanuts.  Presented particularly artfully with a crunchy and interesting texture.  Tasted particularly insipid which only made its rather unambitious taste even more disheartening.  It could have been so much more.  Alas, this was not to be one of those occasions of triumph. 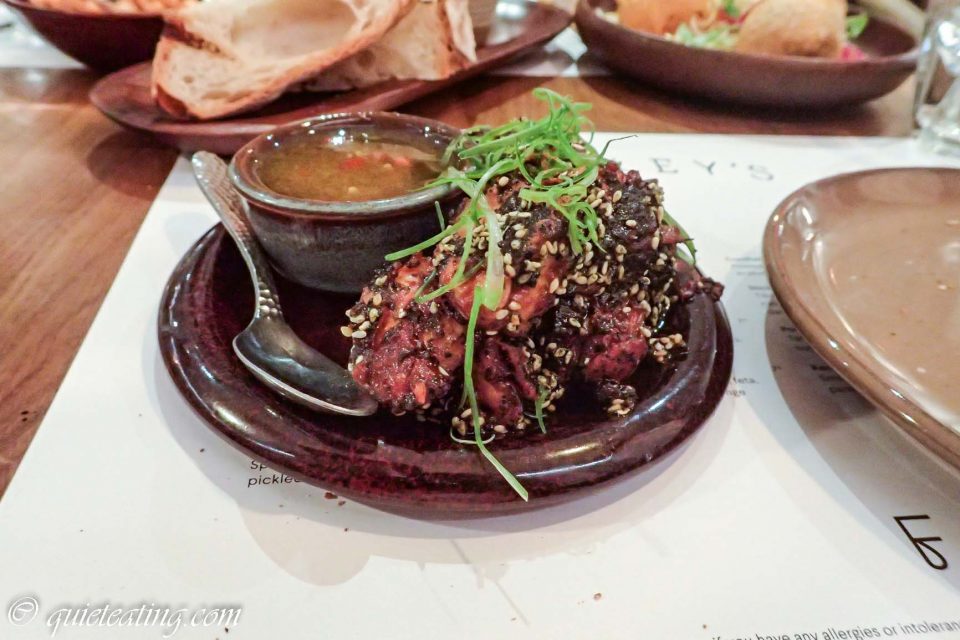 Charcoal grilled chicken burnt ends, Korean BBQ, spring onions and sesame seeds.  Some weird sour dip too.  Overly salty, these strangely reminded me of preserved Chinese sausage.  In case you are wondering, that’s not a good thing when you don’t have rice to offset the unpleasantly pungent flavour.  The saltiness shriveled my tongue. 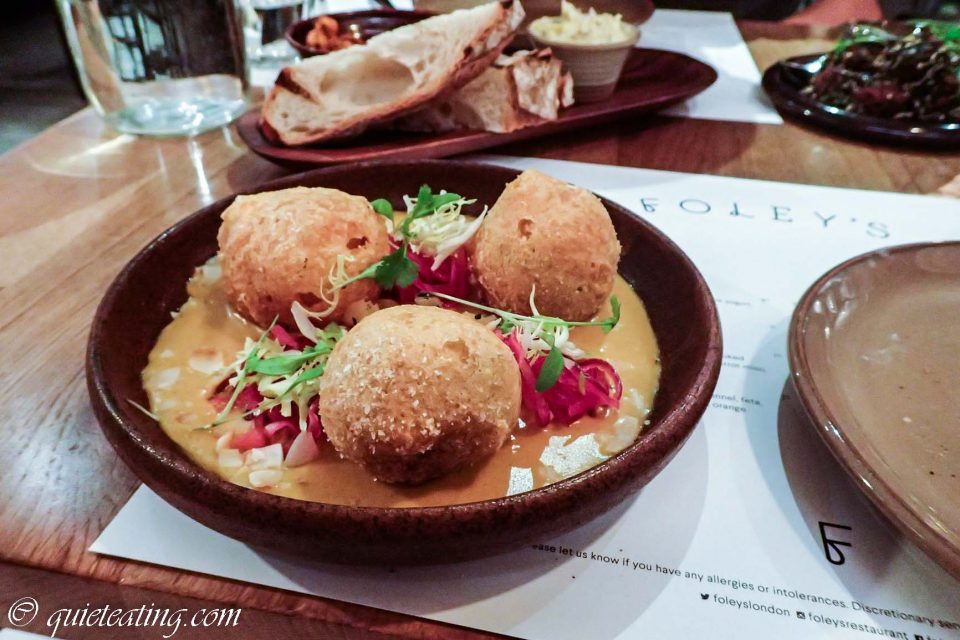 Spiced sweet potato fritters, grilled pineapple, cured red onions and saffron coconut curry.  These were actually ok.  Although this may have been more as a result of what had come before.  When the dishes which proceeded it were a bit too interesting for me, a more monotonous dish was a breath of fresh air. 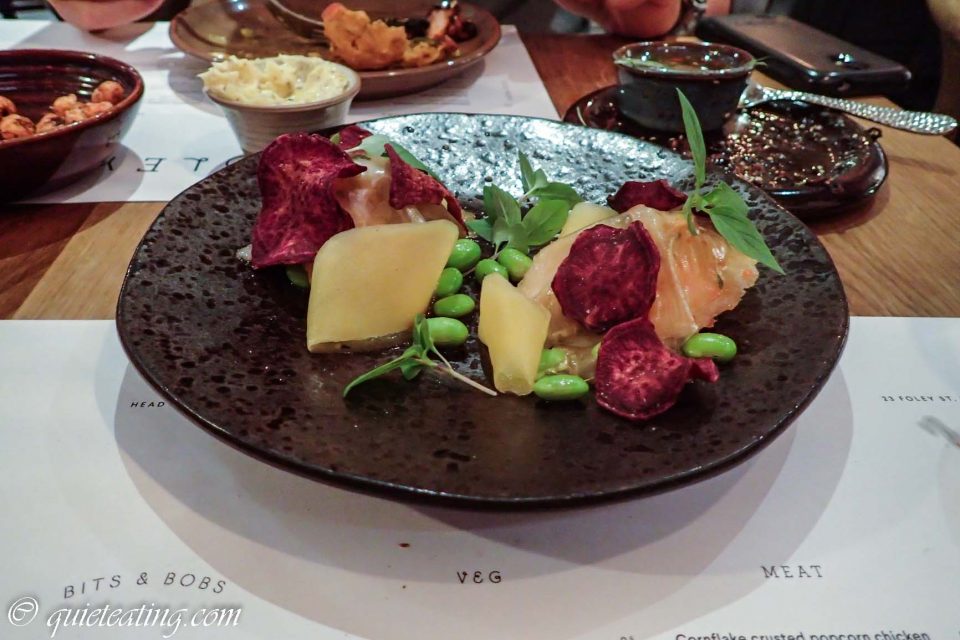 Vietnamese summer roll.  Cured plaice fillet, picked rice paper, mango, purple yam, Thai basil and edamame.  Horribly sour, I did wonder if there had been a mistake here.  The menu did not say that any lemon was in the dish.  So strong was the taste that I speculated whether someone had accidentally used Fairy dishwasher liquid instead of salt.  Definitely to be avoided.  Nicely presented though. 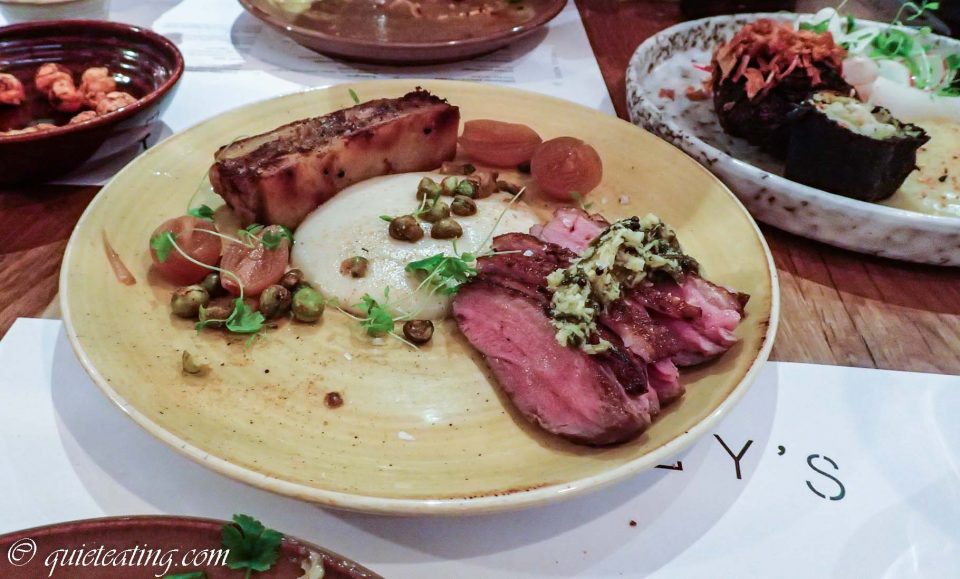 Keralan duck, smoked breast, confit leg gratin, ginger parsnip puree, coriander and coconut.  The puree was good.  The duck meat less so.  Again somewhat lacking in zest and taste, the duck tasted as if it had been subject to particularly skillful cooking to leach flavour out.  Another D here.  A for presentation though. 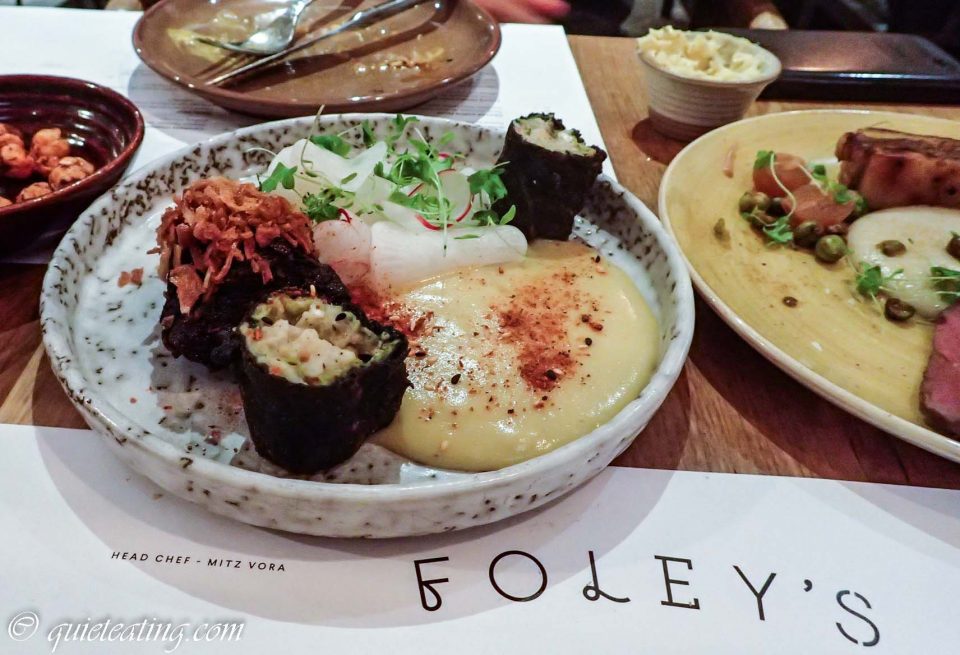 Sticky beef, Tibetan potato puree, prawn and cabbage roll tempura, crispy shallots, daikon and togarashi.  My first bite resulted in an overwhelming burnt taste.  In desperation, I soldiered on as surely it couldn’t all be like this.  I’m glad I did as I found the redeeming dish of the day. The rest of the meat after this first bite had depth of flavour alongside a just right consistency that seemed to put the rest of the dishes to shame.  Then there was the clever and unusual prawn and cabbage roll tempura.  Omitting memory of the burntness, this was excellent.  Perhaps this was a glimpse of what things could have been and why the critics have fallen in love with Foley’s. 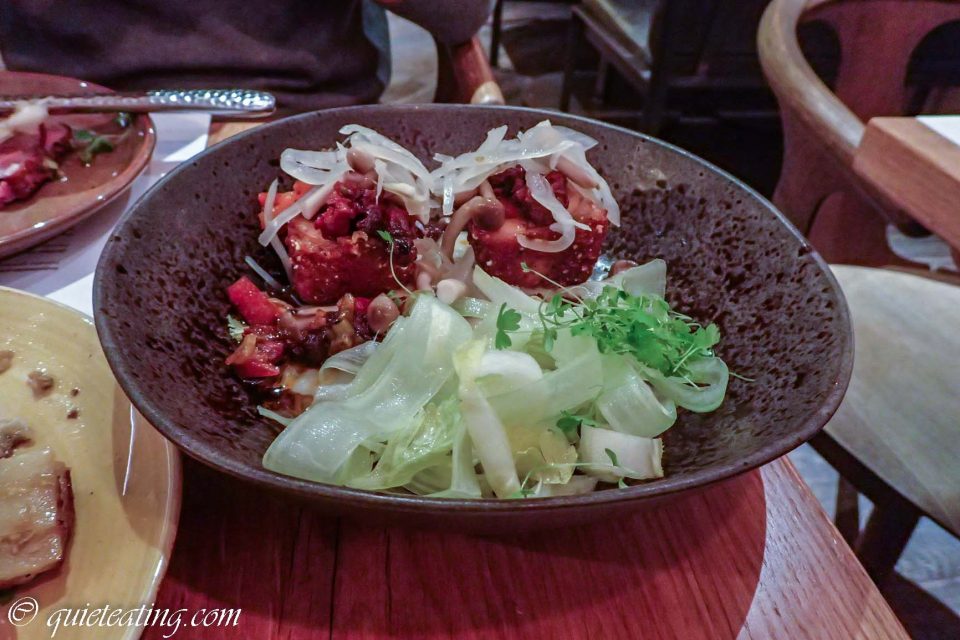 Cornflake crusted popcorn chicken, pickled Shimeji, white onion, endive and chorizo.  With memories of the beef on our tongue, we decided to test lady luck and go for another dish in desperate hope that things would continue along this sharply upwards trajectory.  We were sorrowfully to be rather disappointed.  The chicken was rather bland and the vegetables rather uninteresting.  The crust on the chicken was good though.

Throughout the meal, we were rather alone, being for an hour the only 2 diners in the entire establishment.  I thought that maybe our lack of service could be explained away by this particular set of circumstance.  He must have been so enamored with the other non-existent diners to attend to us.  The service (or lack thereof) seemed symptomatic of the food.  I guess it was folly to go to Foley’s.  A miscalculation of almost epic proportions.  I could think of many words to describe Foley’s but they’re not for polite company.  Maybe it was best that the waiter stayed away.  In the end, Foley’s managed to fool me.

Lunch (all of the above shared for 2) was GBP35 per person excluding drinks and service.