St John is known for starting the nose to tail eating revolution in the UK.  People over here somehow seem to think it is a revolutionary new way to eat.  Yet, I’m sure the peasants in the fields in Middle England could have told the modern urban diner something about eating off cuts.  That’s what desperation does to you, be the mother of all invention.  As otherwise they would be forced to scrounge around in the dust for subsistence.  In a more up to date example, we (Chinese) people continue to do as our ancestors did.  If it moves, or sometimes even if it doesn’t, it can be eaten. Think stewed chicken feet, monkey brain, tripe and of course twigs (bird’s nest).  Maybe that’s just me but that’s why I like aquariums – so, so much food swimming around…

So this is how we ended up at St John with irrepressible hopes.  Both of us were of oriental descent, so harboring unfulfilled dreams. 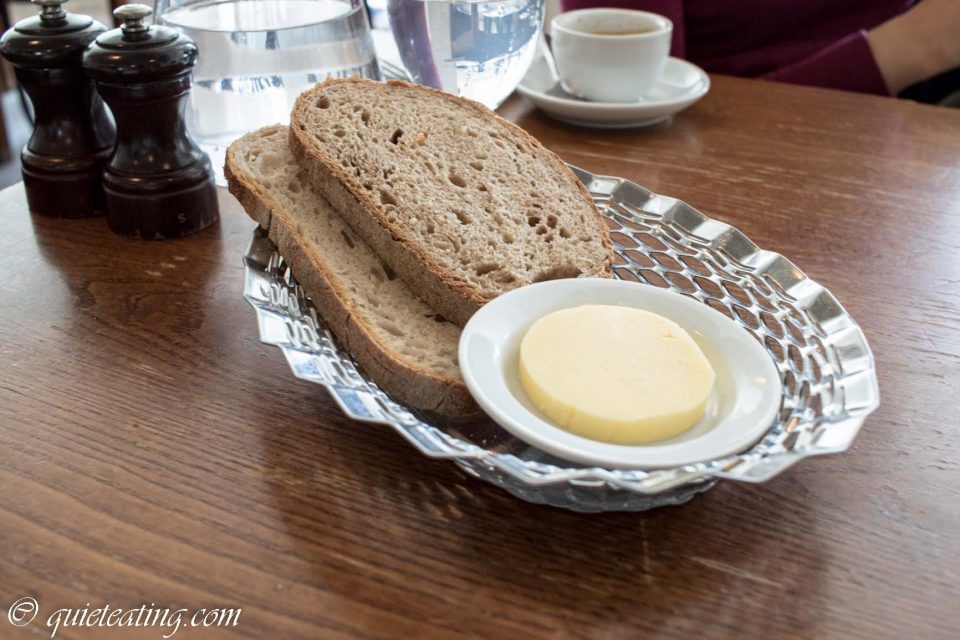 White and brown bread.  First  was something more mundane, bread and butter.  The bread was excellent as we had expected.  Moist, the right side of stodginess, not mired in the mud but rather just the right level of substance to take the creamy butter. 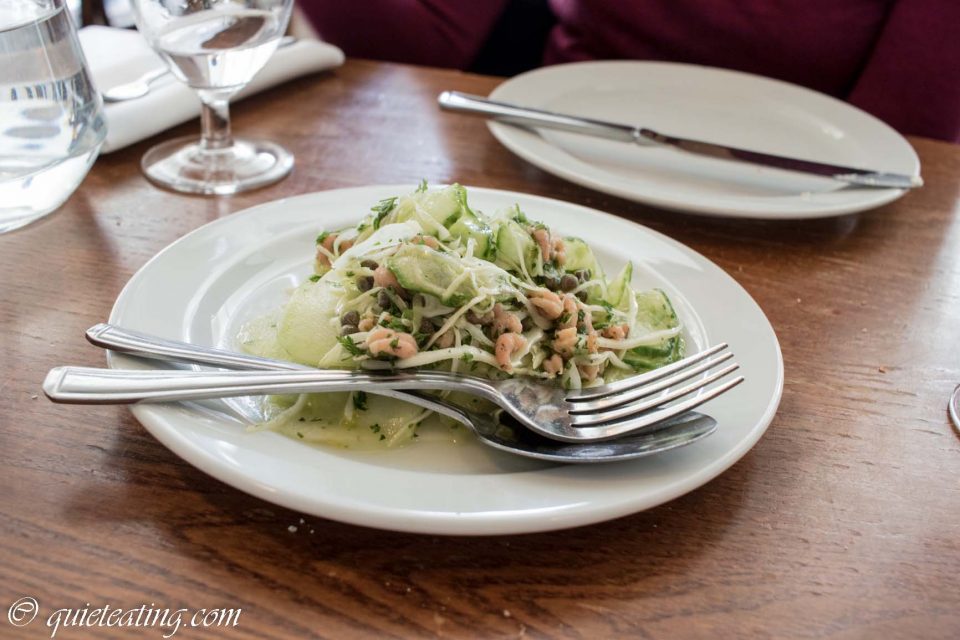 Kohlrabi, Brown shrimp and Chervil. With a very clean taste and particularly refreshing.  A nice drop of cold water in the journey to banish the bad food memories I have had recently.  Although I am not one for greens, this went down smoothly.  Could have done with a little more shrimp though but otherwise not bad. 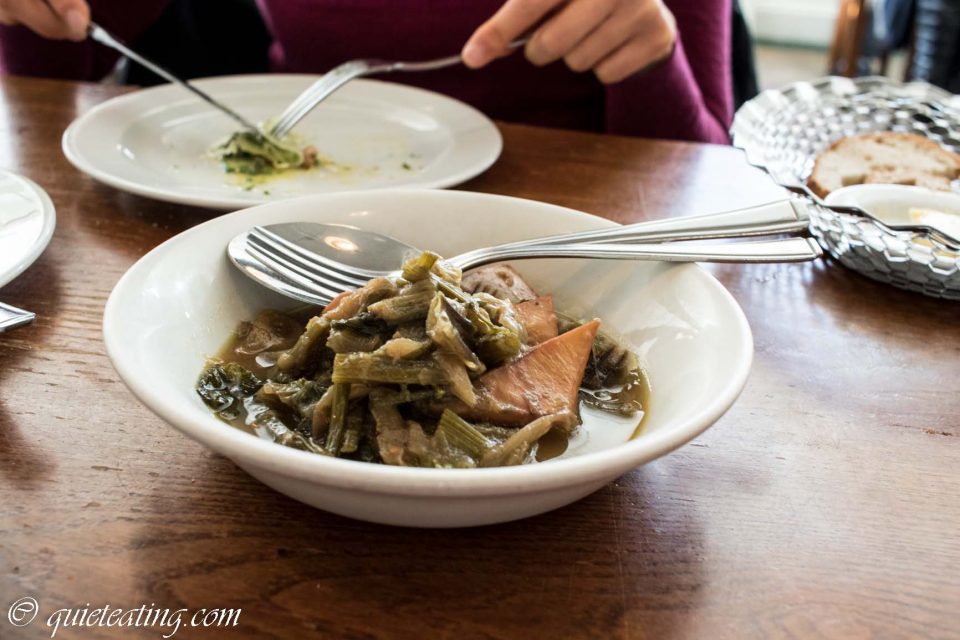 Braised Cuttlefish and Alexanders. Interesting.  Savoury and sweet.  An interesting texture.  A salty and meaty texture from the Alexanders.  A firmer touch to the cuttlefish.  An unusual blend of flavours and textures that went together well. 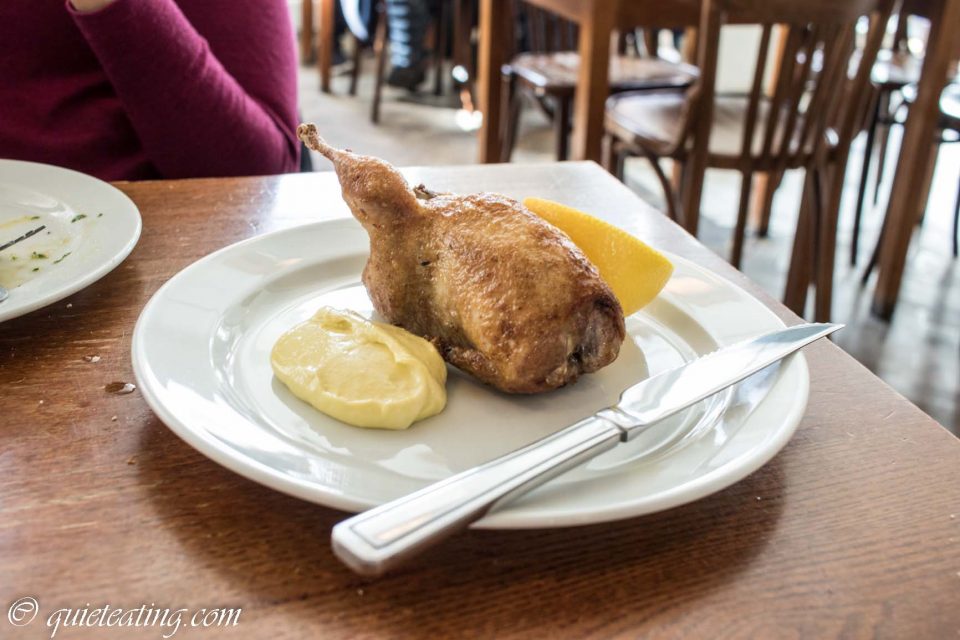 Quail and aioli.  Delicate, juicy and with a lovely aioli.  The best example of quail that I have ever had.  The bird was oh so very moist, unlike other quail I have had. The small bird seems to be oh too easily overcooked in other places I have tried. With the aioli it was magnificent.  If there is a reason to come, this is definitely it. 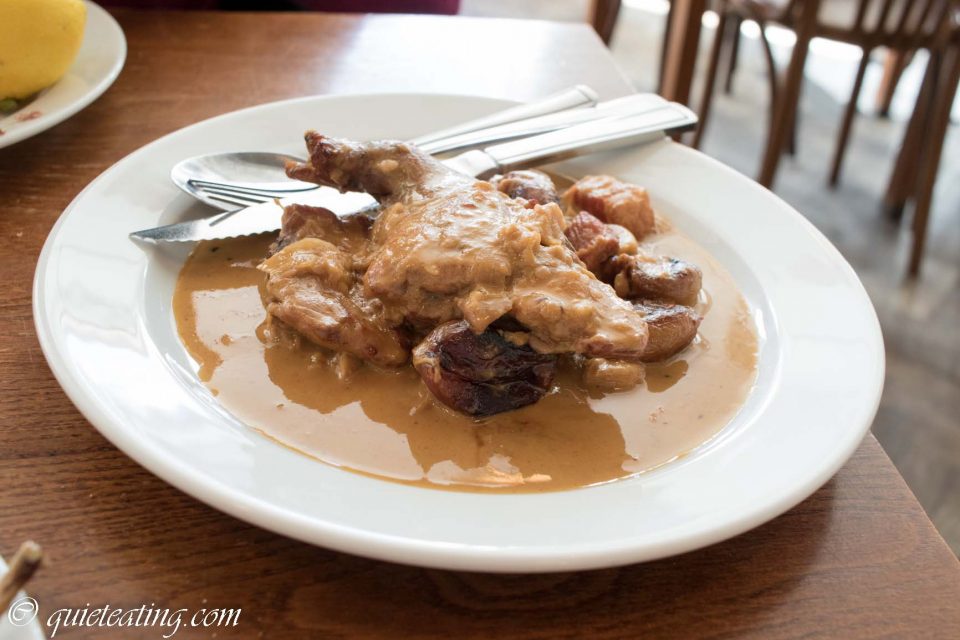 Braised Rabbit, Bacon, Mustard and Creme Fraiche.  With such an encore, we had high hopes of the mains.  This actually ended up as appetizing as it looked.   This rabbit was a great contrast to the magnificent bird that had gone before.  It was tough, dry and kind of bad.  Best avoided. 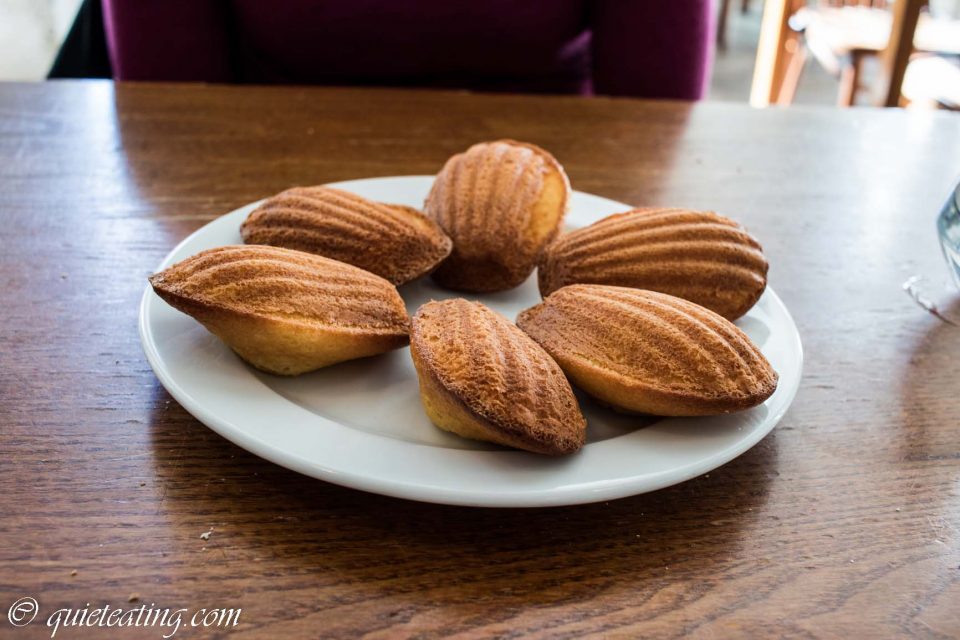 Madeleines.  Justification for the name of St John Bread and Wine.  Finishing on a high note, these madeleines were crispy on the outside, meltingly soft on the inside.  These went a long way to banishing the disappointment of the rabbit.

So although we did not stray to the more esoteric cuts on offer, we did kind of enjoy ourselves.  Even if some of the dishes were a bit hit and miss, they have to be applauded for going out on a limb. It’s not everywhere that you are offered duck’s heart, deviled kidneys and hokey pokey ice cream.  Although we didn’t try any of these, maybe that’s a reason to return.