Selective memory is a great thing.  On occasion, all I can remember are past glories, triumphs and inexplicably stratospheric heights of the food I consumed.  At other times, when a more maudlin mood is upon me, all I can see and smell is the garbage around me.  There isn’t much room for average in my head.  It either has to be ridiculously good or otherwise cataclysmically horrible to stick.  The boring is usually edited out.

So, this is how on a very, very rainy day, we decided to try Black and Blue.  The hope was for a great meal in a steak restaurant in Borough market.  With the weather as it was, it was an ideal time as metaphorically cats and dogs were raining down.  Literally, I wouldn’t be surprised if around the corner such animals were being sold.  Borough Market, which is famed for its exotic meats, is a place where you could descend if you have a hankering for meat that bounds like a kangaroo or outruns you like an emu.  Although I know that here (as compared to Korea), more domestic pets may be off the menu.  Then again, London is just across the channel from France where horse meat is all the rage.  So much so that some managed to place itself into unwitting supermarket minced meat blends.  And that is how scandals start, but that is another story. 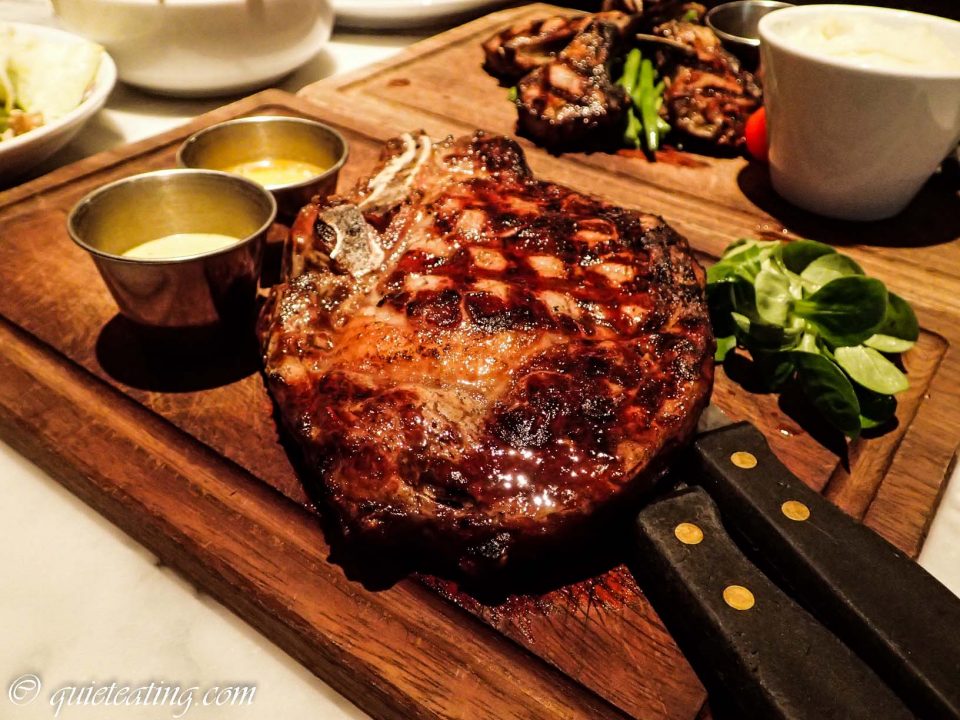 Cote de boeuf or fore rib.  My favourite cut of cow as it has exceptional taste.  I suggest you try it if you can.  It is a cut of meat that contains great flavour while retaining its juiciness with the large bone embedded.  This restaurant was where I discovered the joys of this cut.  Sadly this particular offering seemed to uncharacteristically lack that in fortitude.  It just seemed a bit washed out.  Maybe the kitchen had taken the name “Black and Blue” too literally.  Pounding the flavour out of the beef. 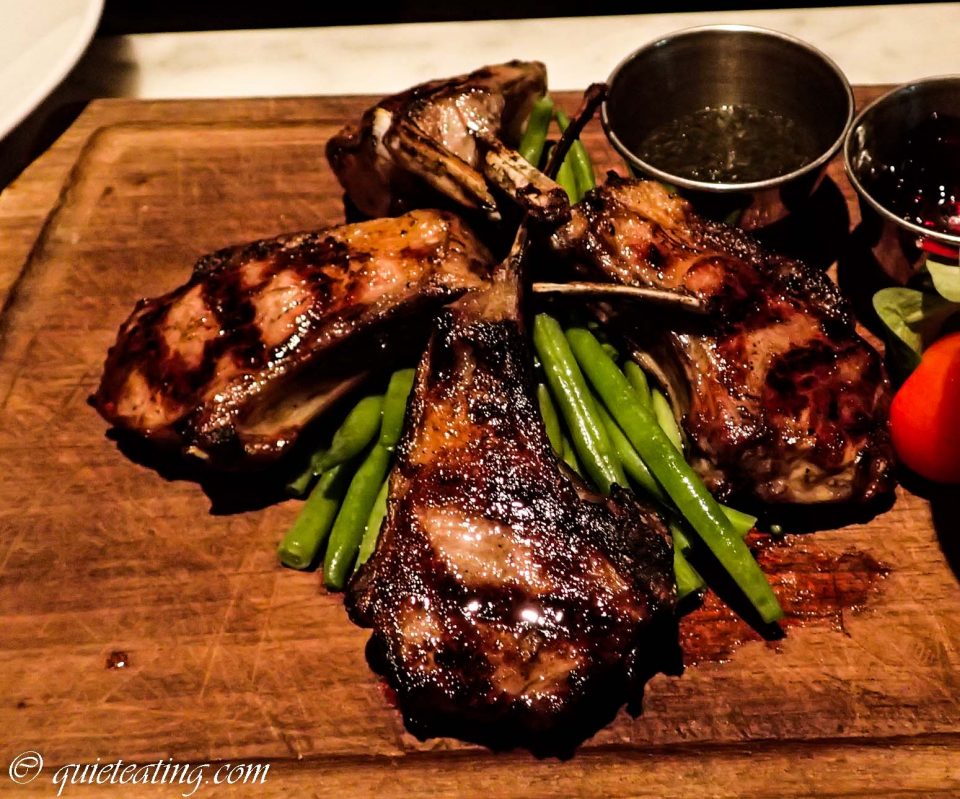 Lamb cutlets.  We thought that with a smaller animal the food might turn out a bit better.  Yet, sadly, it was a bit overcooked and dry.  Such a pity, what would the poor lamb who had to give these up have to say?  He wasn’t given up for a good cause… 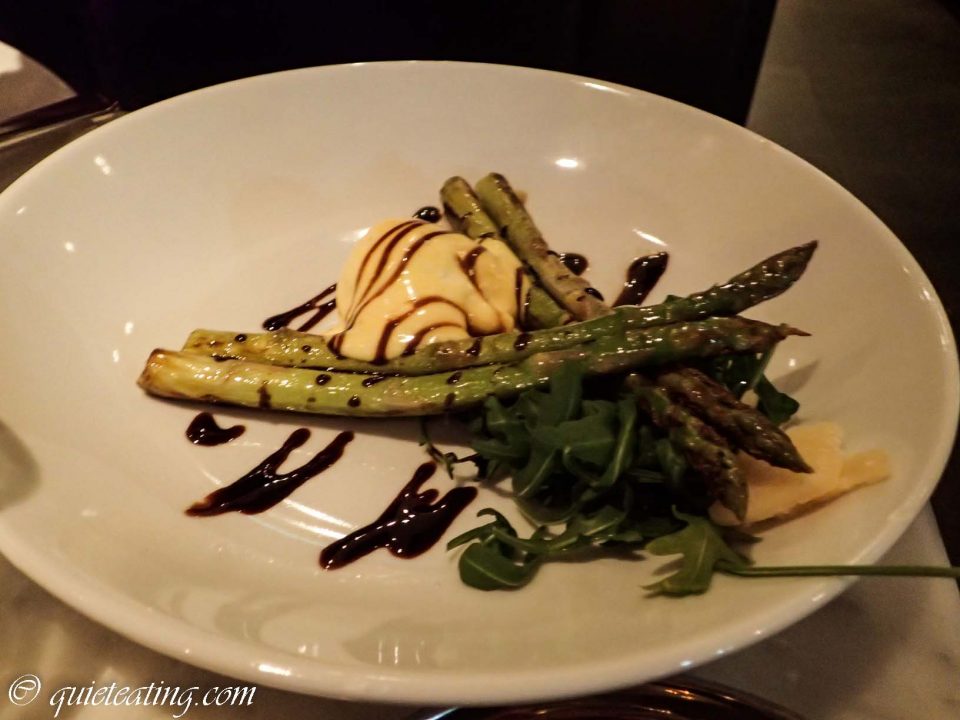 Grilled asparagus.  These were soft and favourful although the over-dressing of mayonnaise spoiled things.  When things tend to be over-seasoned, I get suspicious about something being covered up.  No need for that here, instead it just spoilt the dish. 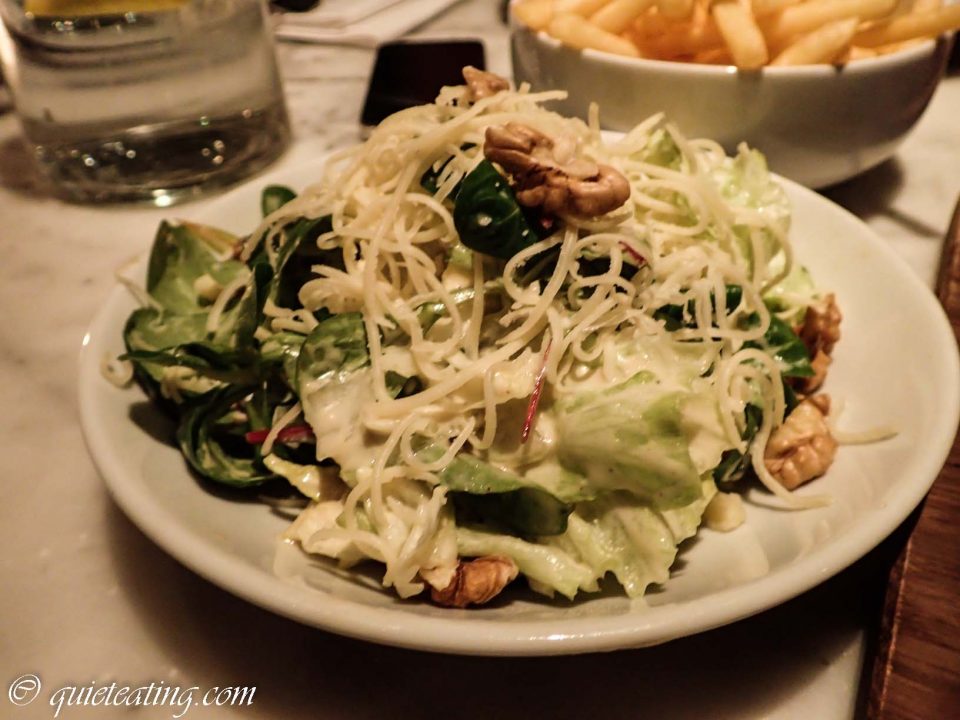 The salad to accompany the steak.  A generous serving of a decent salad.  I usually leave this to rabbits, sheep, cows and the occasional weird friend, but I was glad for it here.  Perhaps it might have been because, relatively, it was really not bad.

There are those types of experiences which you are eager to exorcise from your memory as fast as possible on account of the trauma induced by remembrance.  On the other hand, there are those where you wished you could have them etched in your memory, so sublime was the experience.  At the end of my Black and Blue experience, it was not one of those experiences best unremembered.  Likewise it wasn’t something to cling on to.  Instead, it is maybe best that it fades into obscurity, leaves more space in my head for the extremes of life.  So, if you need an average steak meal at an average price, this is a place to go.  But hey, life is short, so maybe you might like to live a little and try somewhere else.

Dinner (2 courses) was GBP 20 without service or drinks.

2 thoughts on “Black and Blue”