One thing I love about London is that there is always something new to find.  Sometimes, in the most unlikely of places.

I am referring here to food of course.  The arts often seem to be too far above my head.  As my friends like to say, perhaps this is because I seem to lack culture.  I don’t know my Dvořák from my Tchaikovsky or my Monets from my Pissarros.  Yet, putting such meaningless abuse to one side, I like to style myself as knowing more than the common man about food (or at least pretending to). 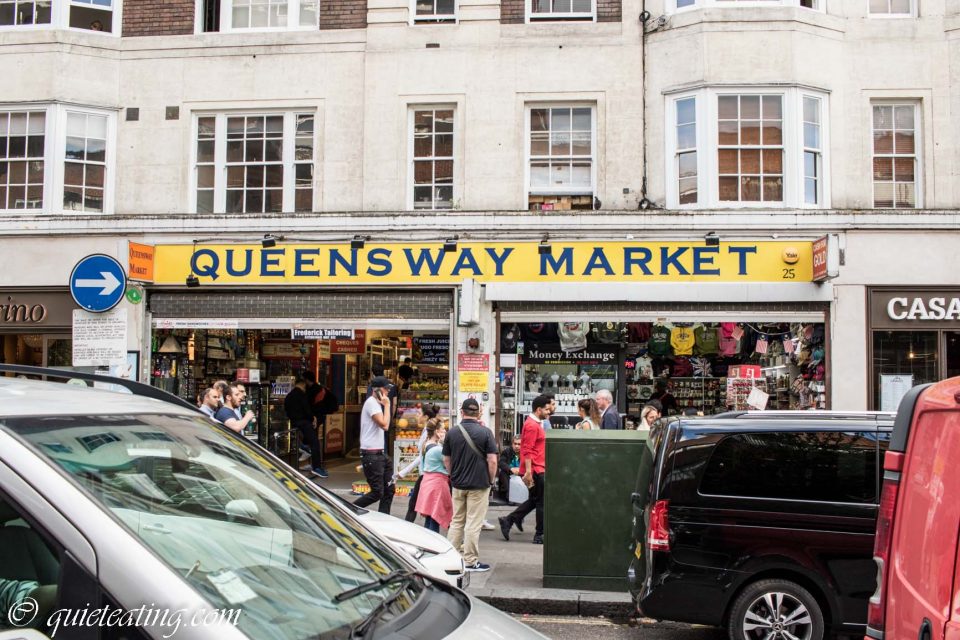 This is the rather underwhelming entrance to the shopping centre where Normah Cafe is located. 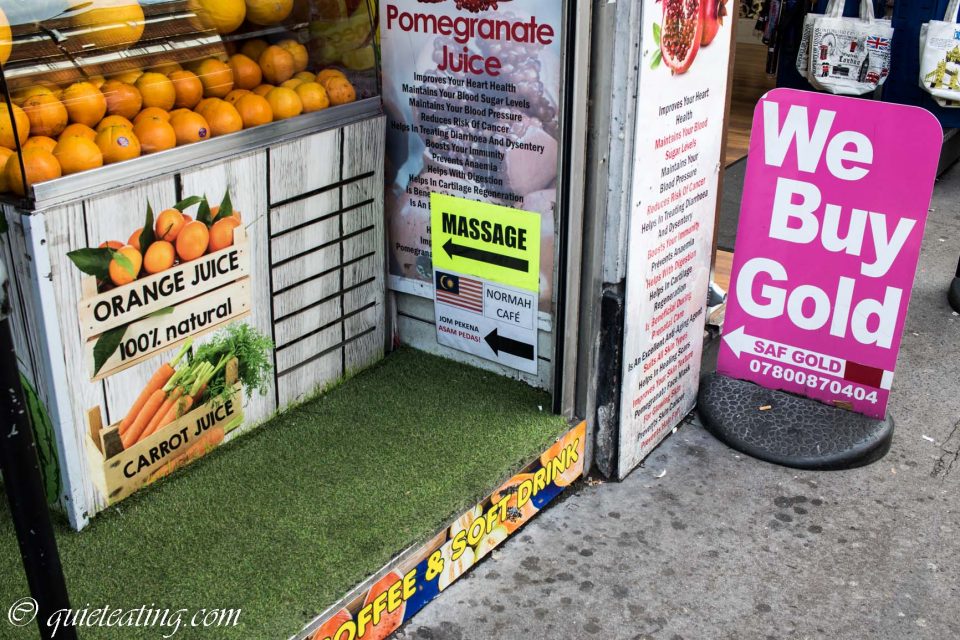 This sign is not that I am soon to open my own pawn business but rather to highlight the difficulty of finding Normah’s Cafe.  See if you can see that little sign pointing the way.  I missed it and this is a retrospective photo as I left, to help signpost the way to others.  Normah’s Cafe is hidden in the back of Queensway Market. 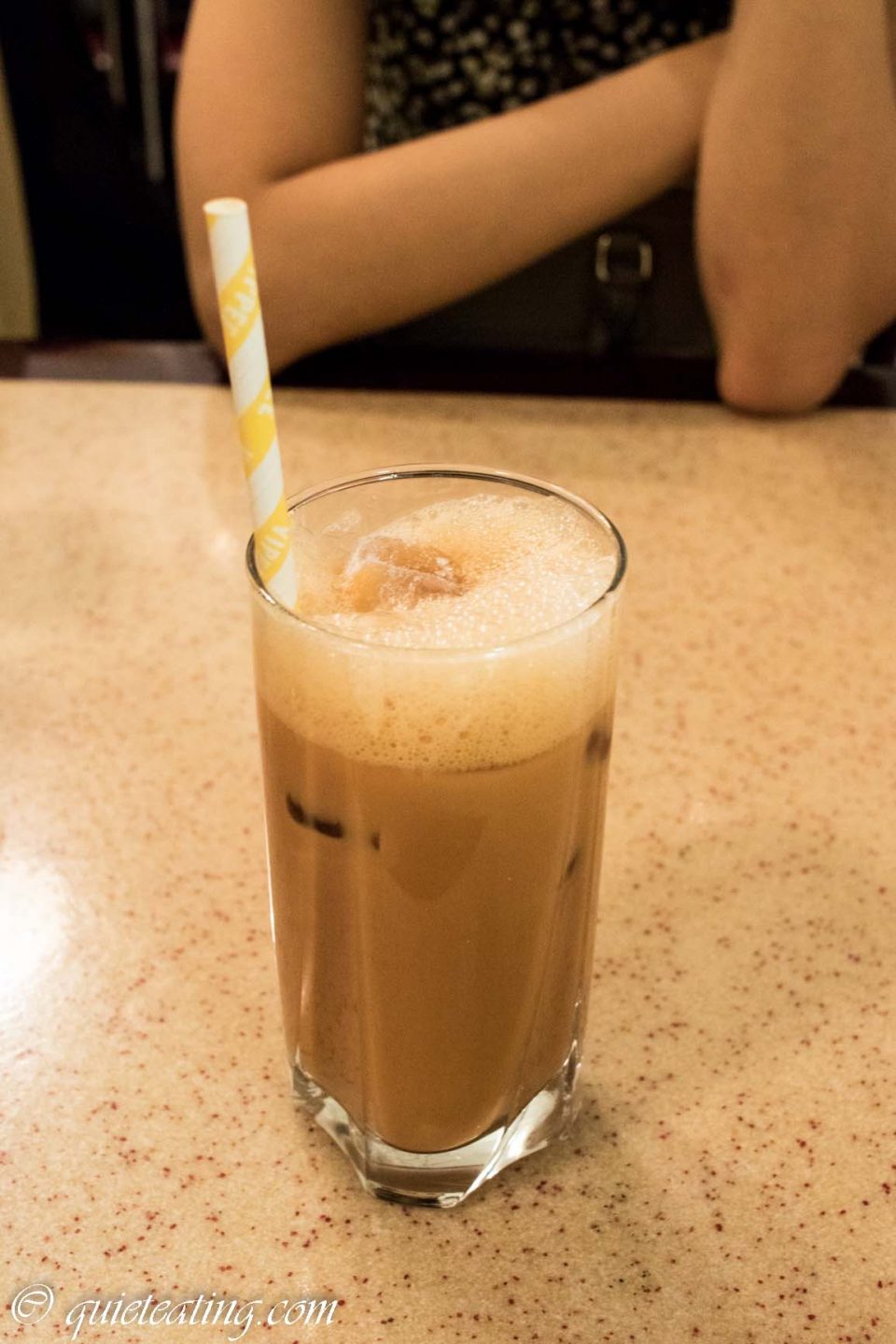 Teh tarik.  When we managed to find the cafe, I was treated to a show of someone in the back making teh tarik in the traditional way.  Creating a foamy drink by pouring the liquid through metres of air.  Airy and tasty.  Takes particular skill if you don’t want to scald yourself, mess up the floor or otherwise boil your customers as other places have been known to do to me. 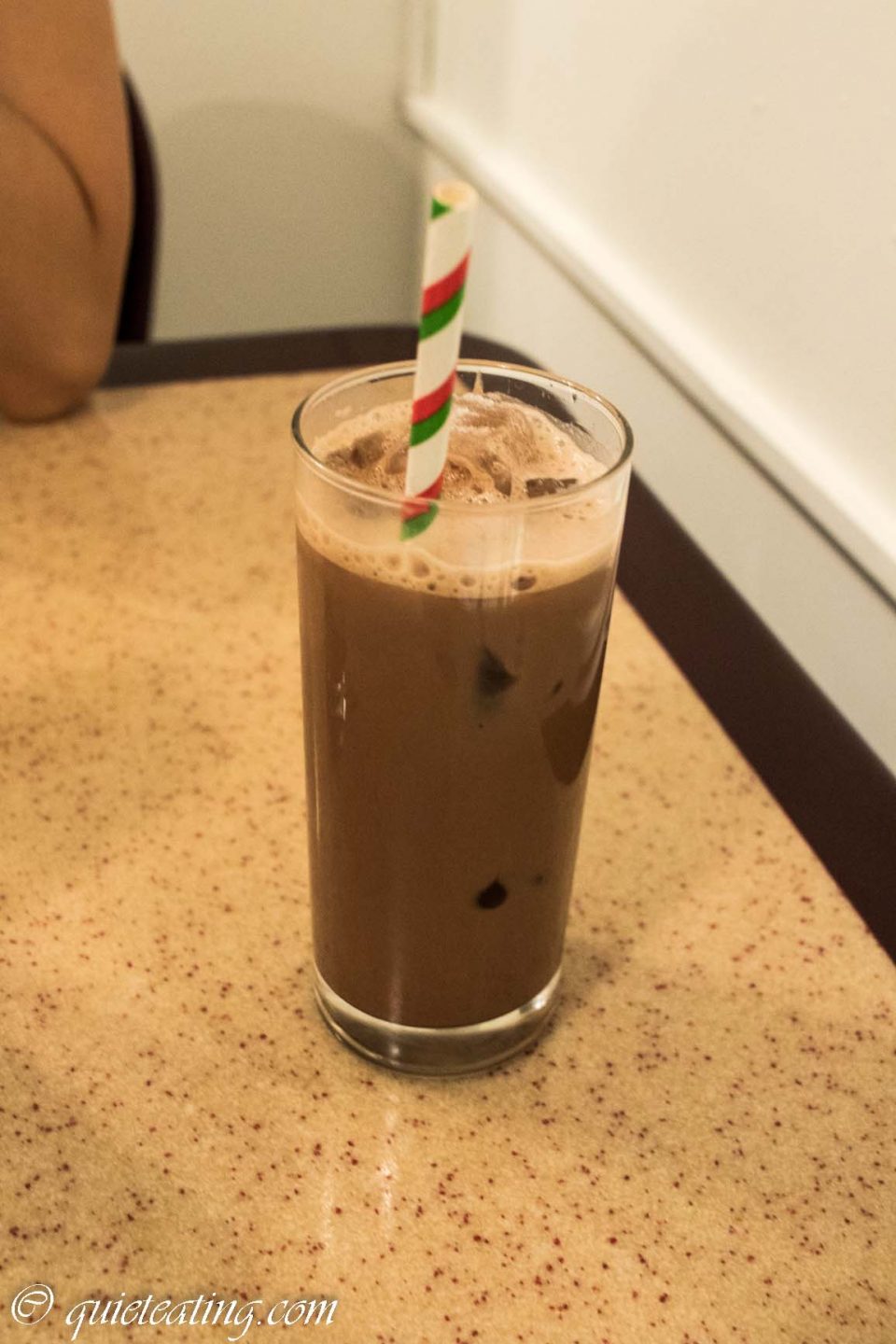 Ice milo.  Deep chocolate taste just like I remember from my youth.  A perfect drink before heading off to play ball and in this case before it was time to eat. 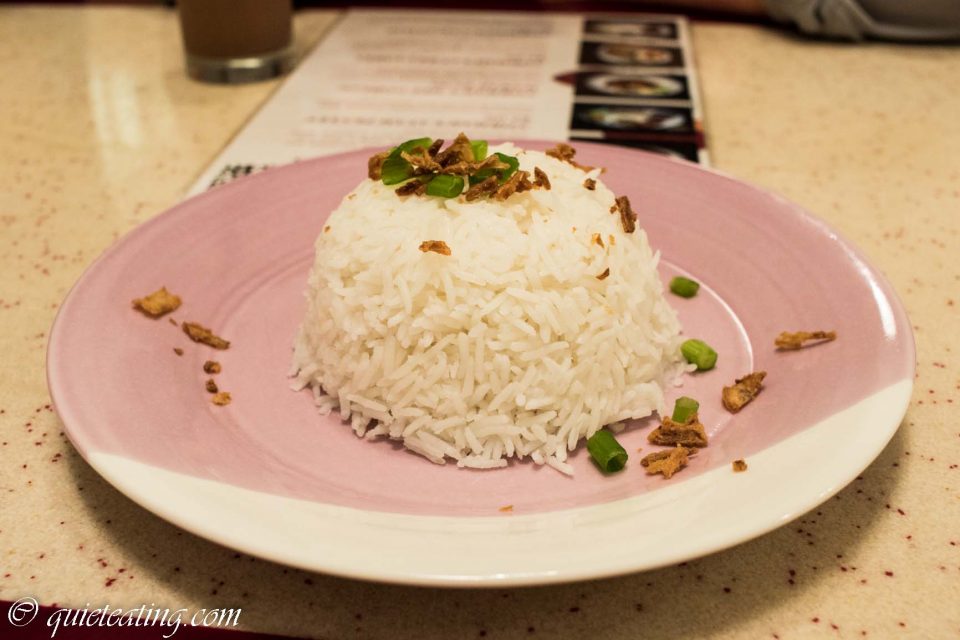 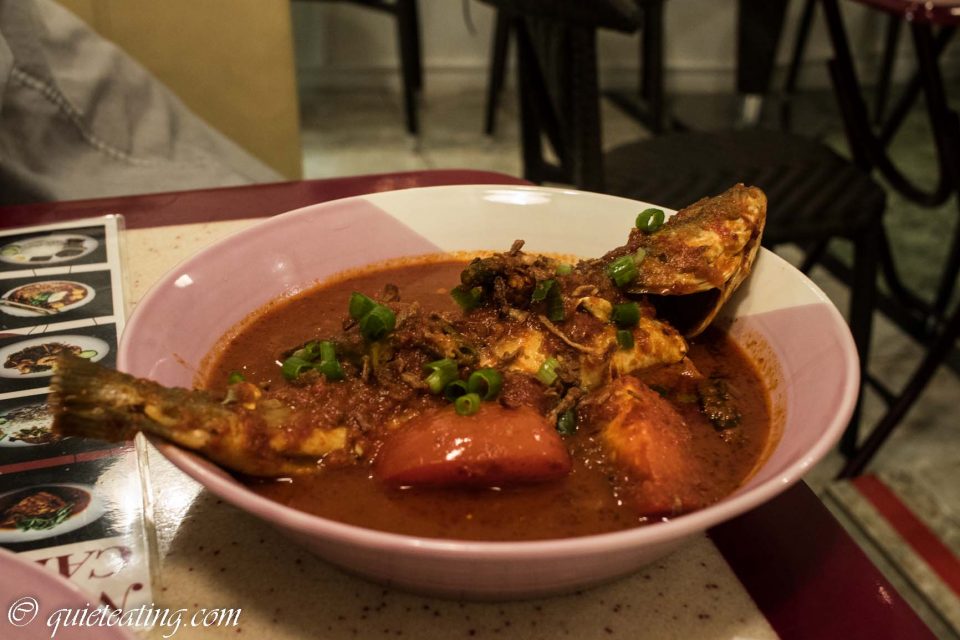 Asam pedas.  Unusually for food these days which seems to be moving the way of divorcing providence from what you eat, this dish is served with the whole fish, bones, flesh and head and all.  Breaking away from the neatly cut and arranged fillets that can be found elsewhere (are you sure that is actually fish?) has its benefits.  There is a sweetness and depth of flavour twitching right there in front of you.  Deep tomato, succulent flesh and a great gravy to drown my rice in, this was a pleasant surprise.  If you are disturbed by the head, that’s what tissue is for. 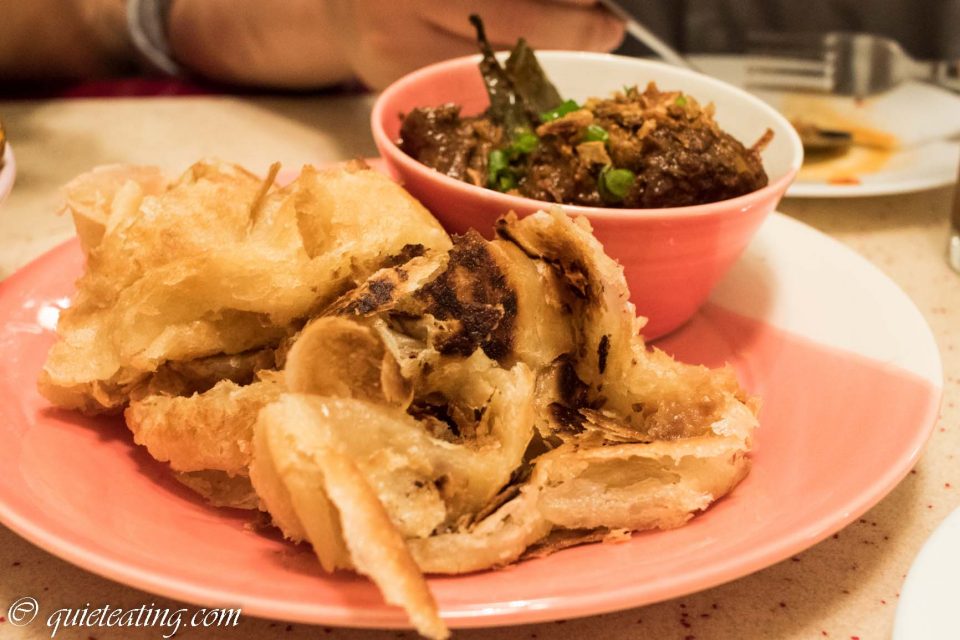 Beef rendang with roti prata.  I have had experience of quite a few pratas in my time in London.  I used to think that Roti King was the best.  Yet, now it has competition in town.  The roti was crispy, airy and crunchy.  The way that I remember it is supposed to be back in Malaysia.  Just the roti would have been enough to make me a happy man.  However, that would be ignoring the rendang.

This is the best beef rendang I have had in London.

With such intensity of flavour coming from a mixture of spices and coconut (painstakingly smashed in the back room, try opening a coconut yourself and you will know) cooked with succulent beef, when I bit into this, I was not transported to Malaysia but rather blinded by a glimpse of foodie paradise.  Well, for a second at least. 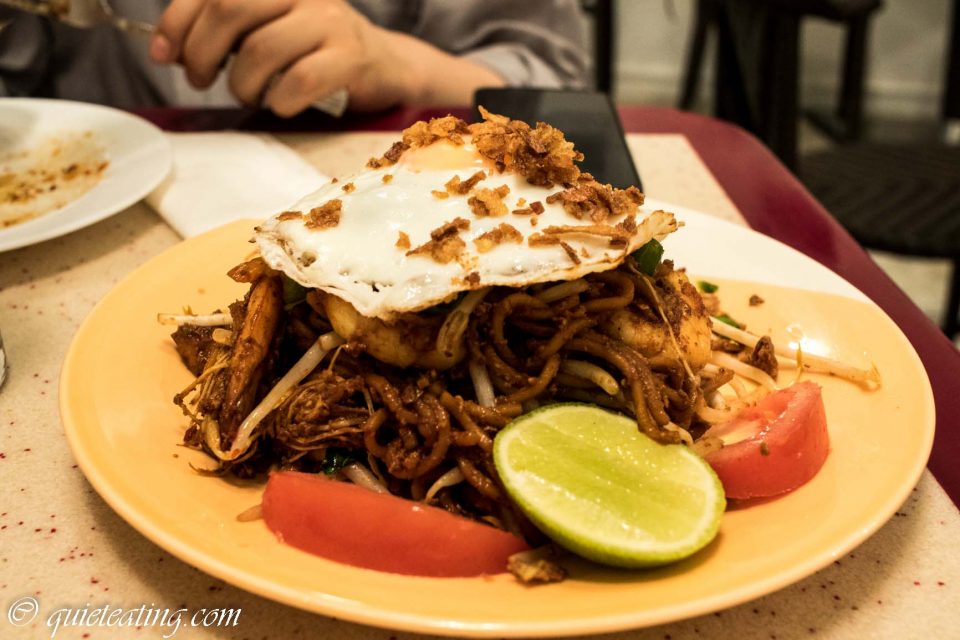 Mee goreng mamak.  An amalgamation of soft prawn, crunchy shallots, crispy egg and squishy noodles creating a flavour from halfway around the world.  Delicious but paled among the company, especially the beefiness of the rendang. 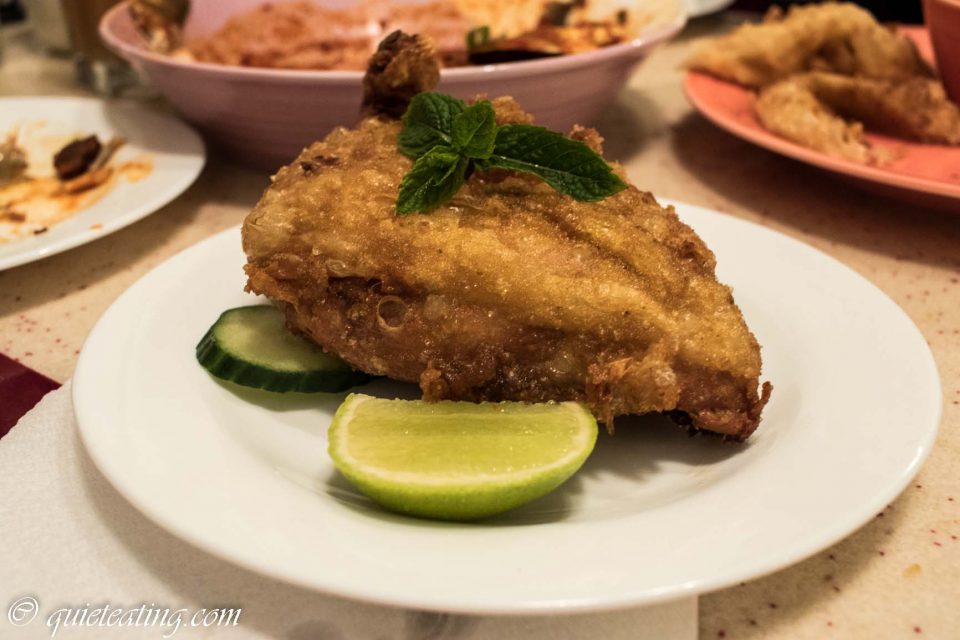 Fried chicken.  I last ate KFC in an airport in Peru where I was subject to an enforced stay to avoid missing my flight.  After an exhaustive check of the various options, we ended up opting for KFC.  This chicken could tell a thing to its brethren half way around the world.  This is how you fry chicken.  A delightfully crunchy crust holding in so much juicy meat.

Often (sometimes in my case) it is worth digging around London in the most unlikely of places.  Sometimes, you might just find a diamond in the rough.  Or perhaps I should say, the coconut in the dessert.

We were invited to review.  Estimated costs of a main and drink is GBP10 excluding service.