There seems to be something strangely attractive about Notting Hill Gate.  It seems to be running on a different time from the rest of London with stately mansions, high end cars parked on the side of the road and particularly well shod citizens in the street.  Not a place for a person like me.  I just don’t have the presence or goods to make up for lack of such.  Yet a man can dream. 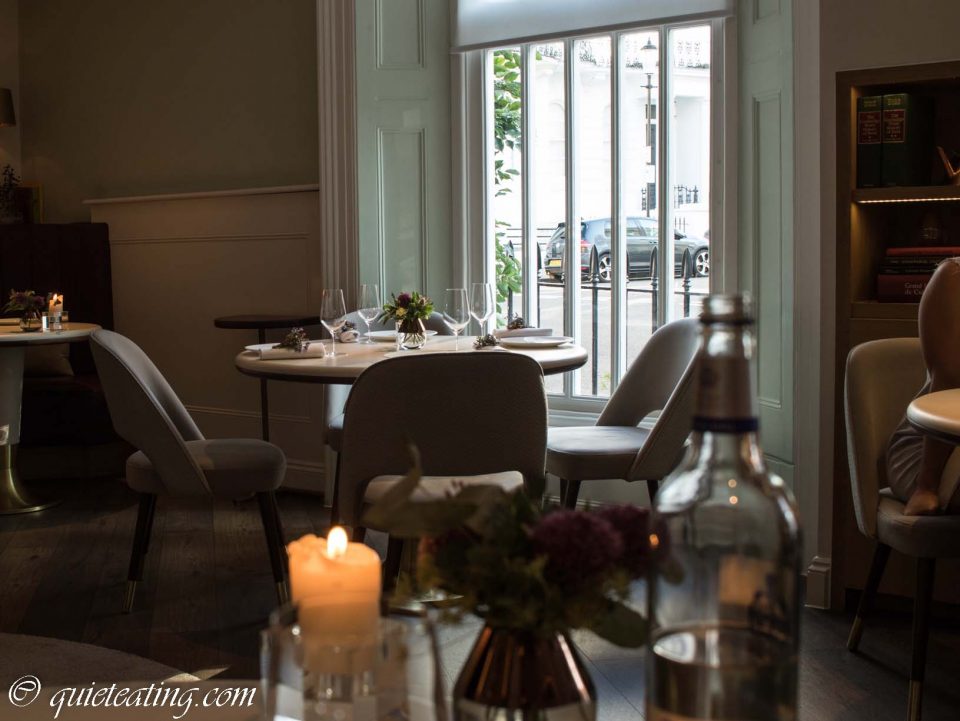 It also seems to attract rather good eateries.  Ledbury, I am looking at you.  So when the patron of this particular restaurant choose to set up her own shop, why not do so near the competition.  Now, it also has managed to gain something restaurants crave and that’s not a sparkly star.  Instead, it is a line.  Not a horribly uncouth line that lines the sidewalk but instead an annoying virtual one.  In order to have the privilege of dining at Core, you need to make a booking almost 3 months in advance.  That was of course not building up my expectations, one little bit. 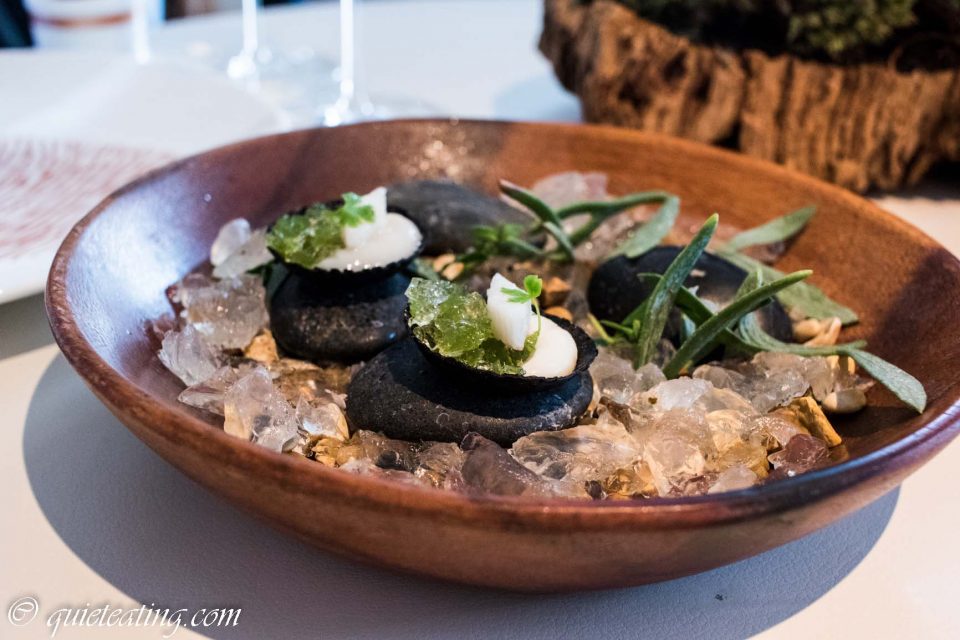 Jellied eels with olive oil.  An interesting little bite but perhaps gone too fast to make an impact on my sometimes coarse palate. 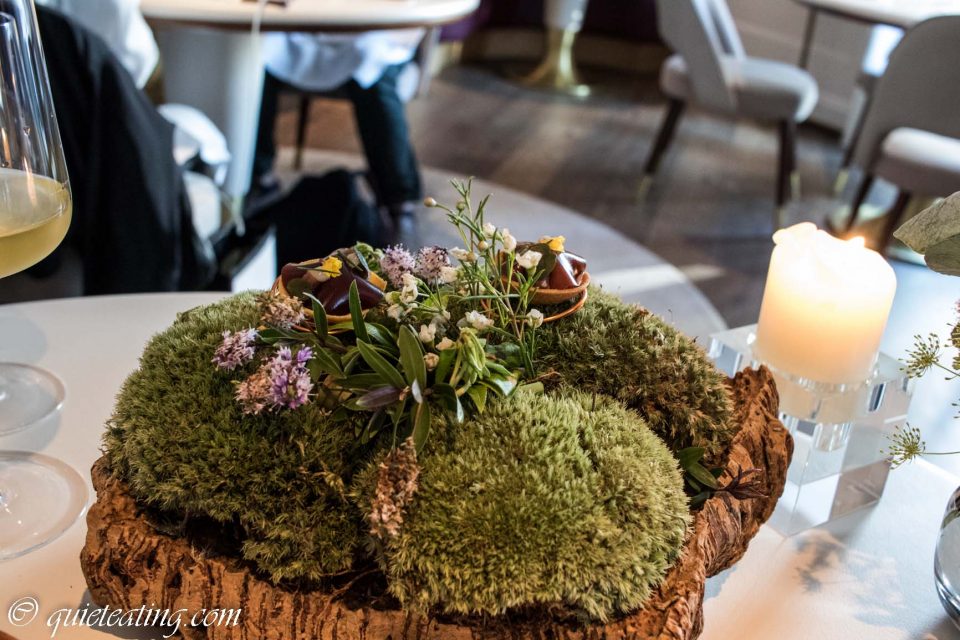 Foie gras tart with madare jelly.  Nestled carefully on top of such greenery, these were light but tasteful with the base adding a lovely foundation. 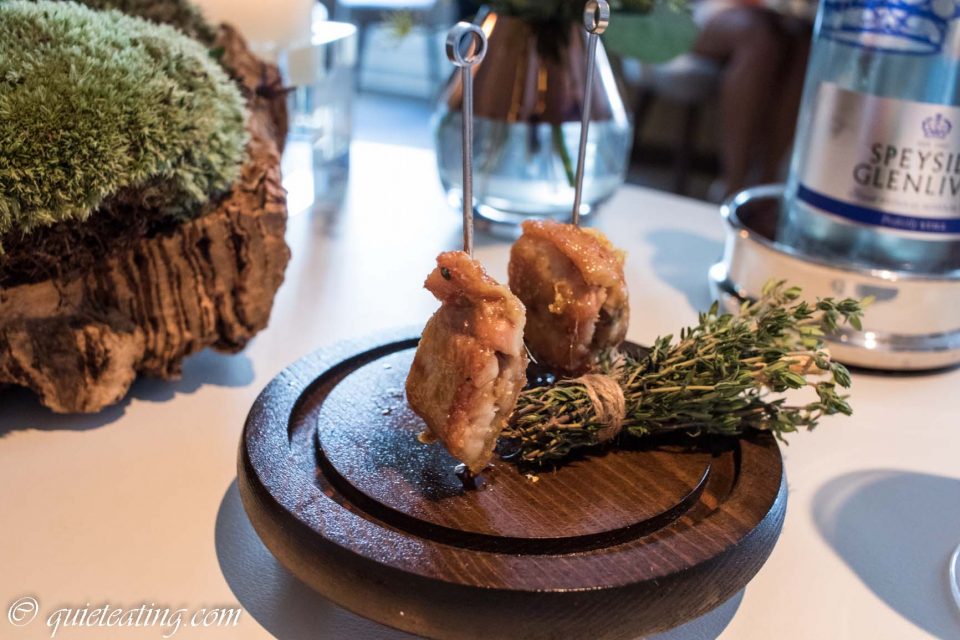 Smoked chicken wings.  The way that these were presented, appearing in a glass container filled with smoke before being whipped up before my eyes to reveal deboned chicken wings seemed fairly familiar to what I had experienced at Royal Hospital Road, Clare Smyth’s previous home.  These were nice but in the end, they were just chicken wings.  Although perhaps the most expensive chicken wings I have ever had. 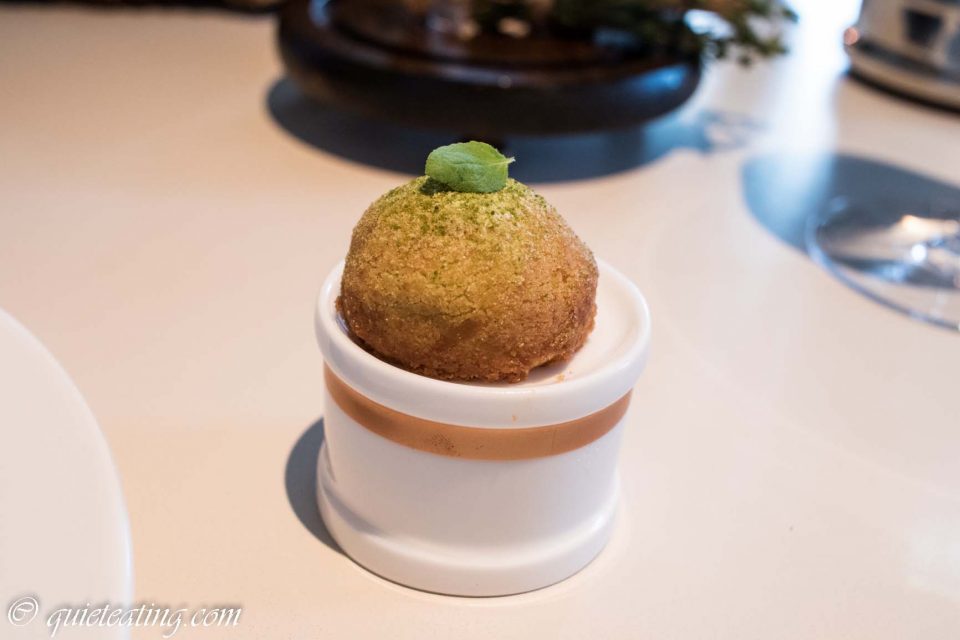 Mint pea tart.  Served on its own little pedestal, this reminded me of a pineapple tart.  With flaky outside crust and luscious textured pea inside, this was a nice prelude to the main meal. 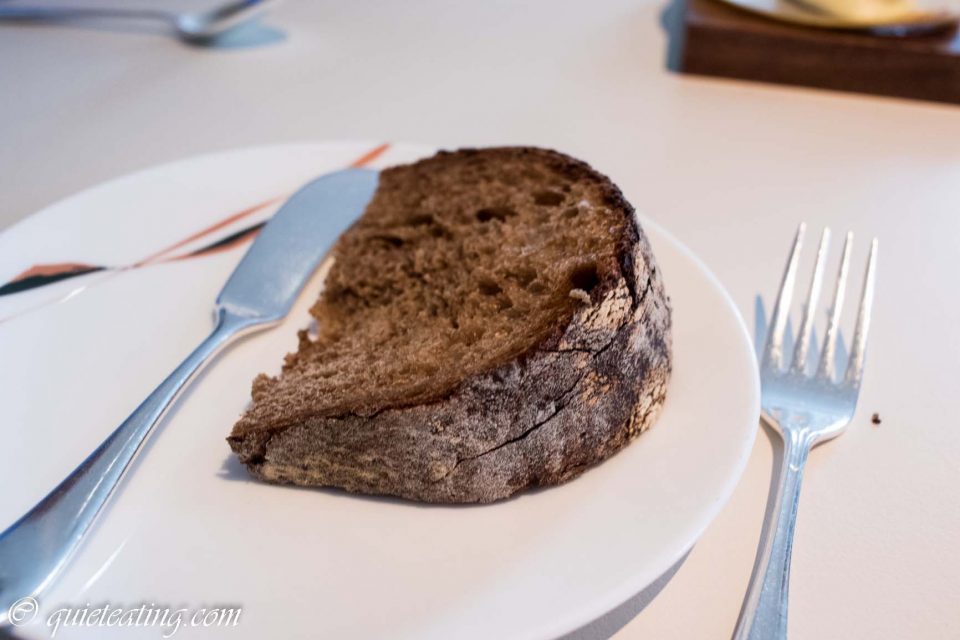 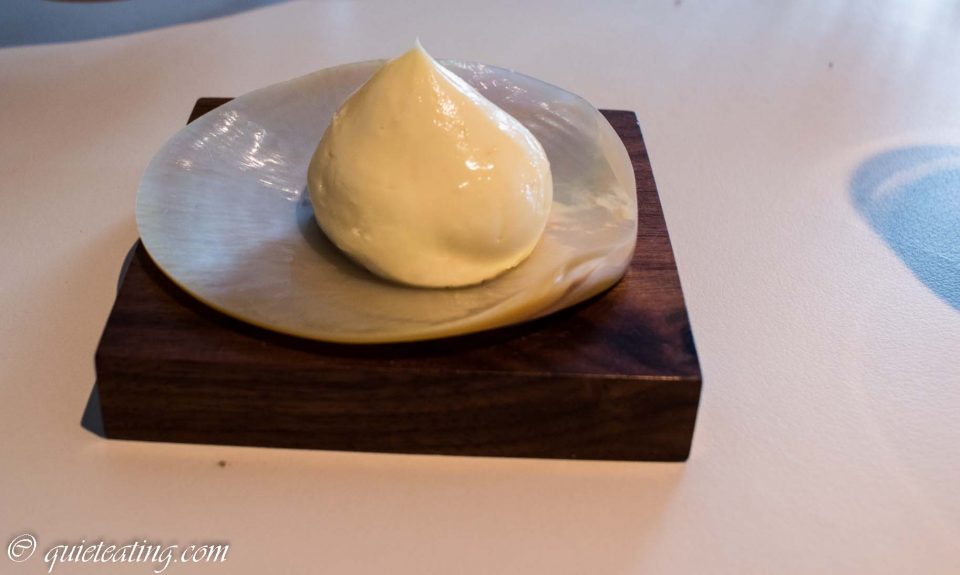 Whipped butter.  Together the bread and butter were decent if a bit too earthy in taste for me.  I would have liked there to have been some choice in the bread.  Not everyone (well at least a non-hippy like me) lives on brown nowadays.  I know that the media portrays green and brown as healthy but I’m not particularly convinced.  Even if it was true, sometimes you need to live a little. 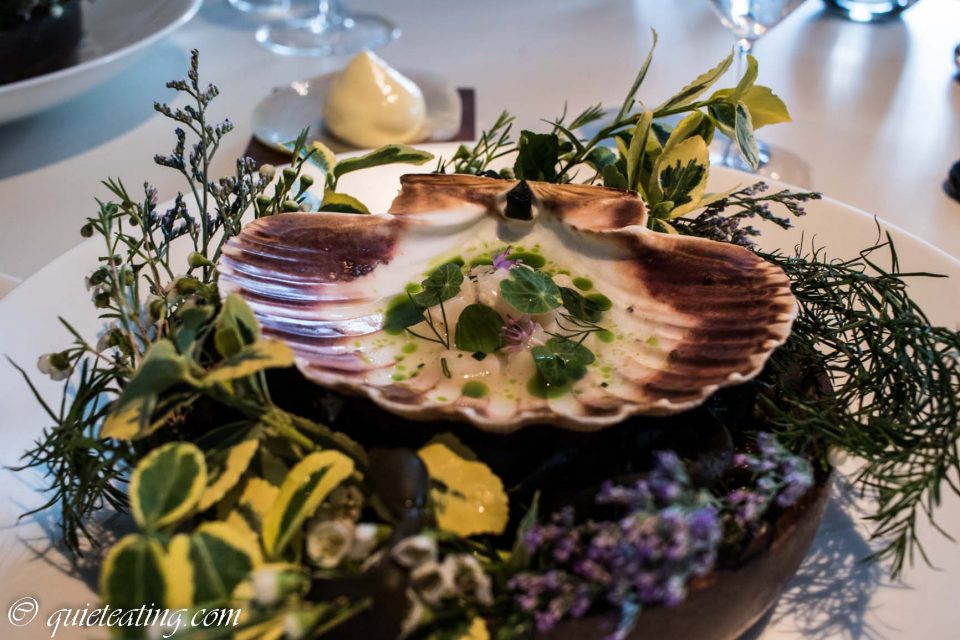 Isle of Mull scallop tartare, sea vegetable consommé.  Delicate taste with sweet flesh, this was a good dish if not particularly hard to prepare.  Perhaps this explains the amount of effort that went into the foliage it arrived on.  If anything, an example of how excellent ingredients can sometimes speak for themselves. 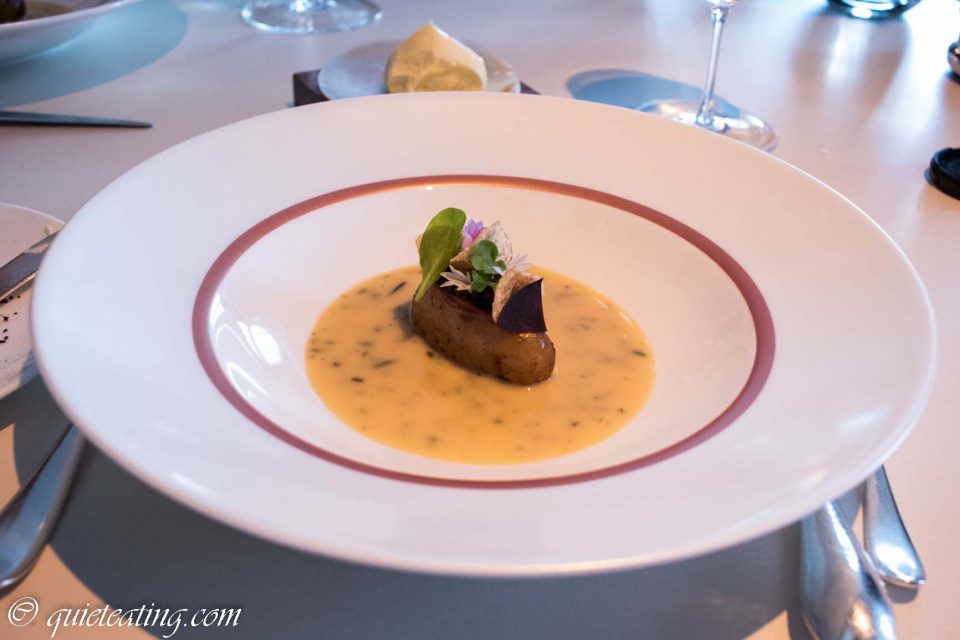 ‘Potato and roe’, dulse beurre blanc, herring and trout roe.  Outstanding.  If I was a potato and I could choose how I could go.  This would be near the top of the totem pole.  Texture was firm yet delightfully yielding once you got past the initial layer.  The sauce and roe, when combined with the garden of vegetables on top created something special.  Especially good. 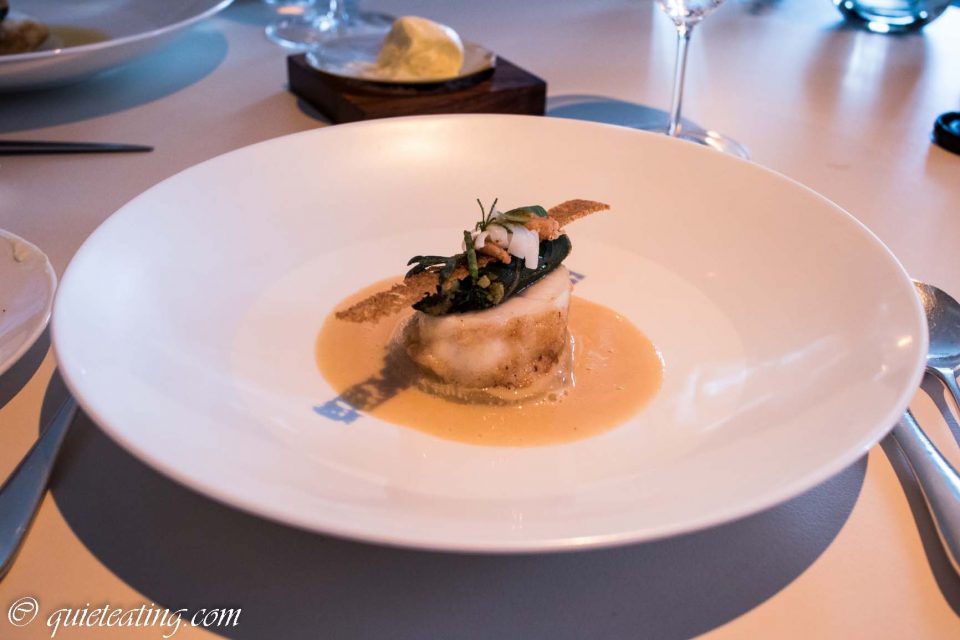 Roasted monkfish, Morecambe bay shrimps, Swiss chard, brown butter.  Carefully cooked, this meaty chunk avoided the dryness of other monkfish I have had.  Again, although decent, I found that particular care was taken in presentation. 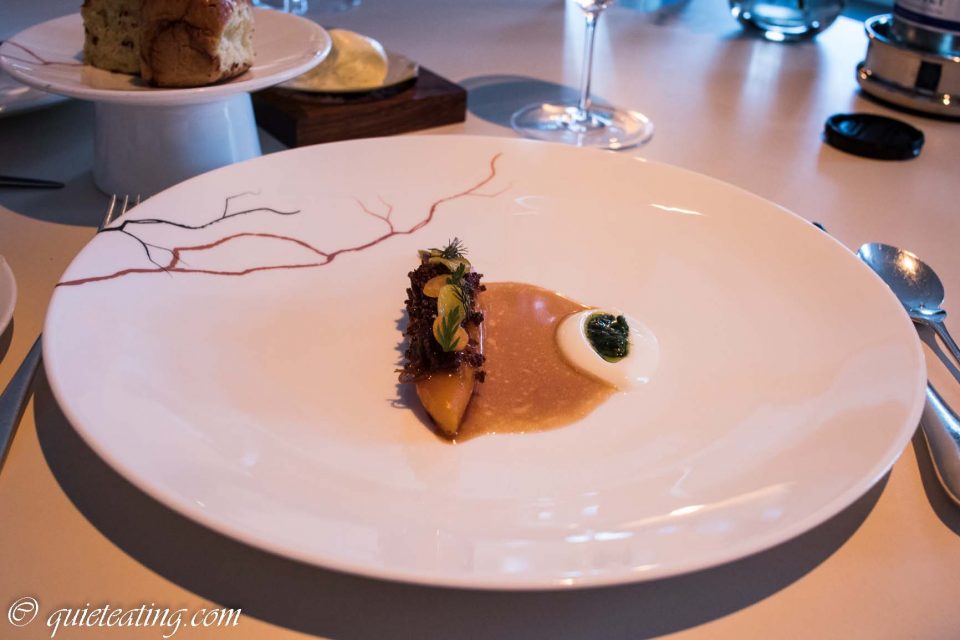 ‘Lamb carrot’, braised lamb, sheep’s milk yoghurt.  A lone carrot given the VIP treatment, here it was dressed fastidiously with lamb, herbs and on the side with yoghurt perhaps from its mum.  Apart from the slightly morbid idea of presenting a dish combining elements of mother and child on the same plate, this was interesting.  Clean taste of the carrot with light juice and complementary smoothness of the diary. 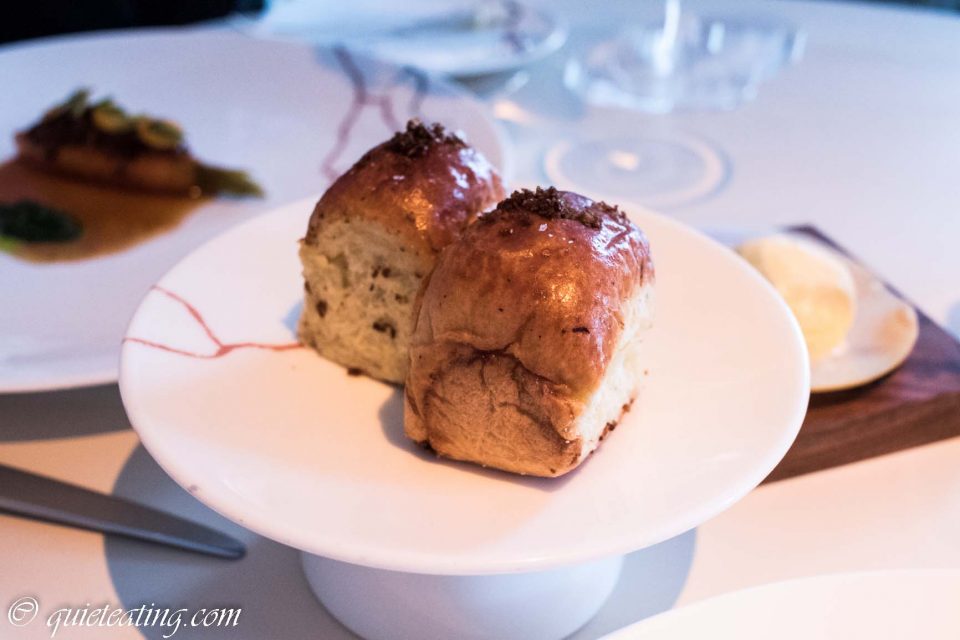 Bread with embedded lamb.  Which was even better with this bread with lamb buried inside.  Yet, it would have been nice to have lamb dressed with carrot rather than carrot dressed with lamb. 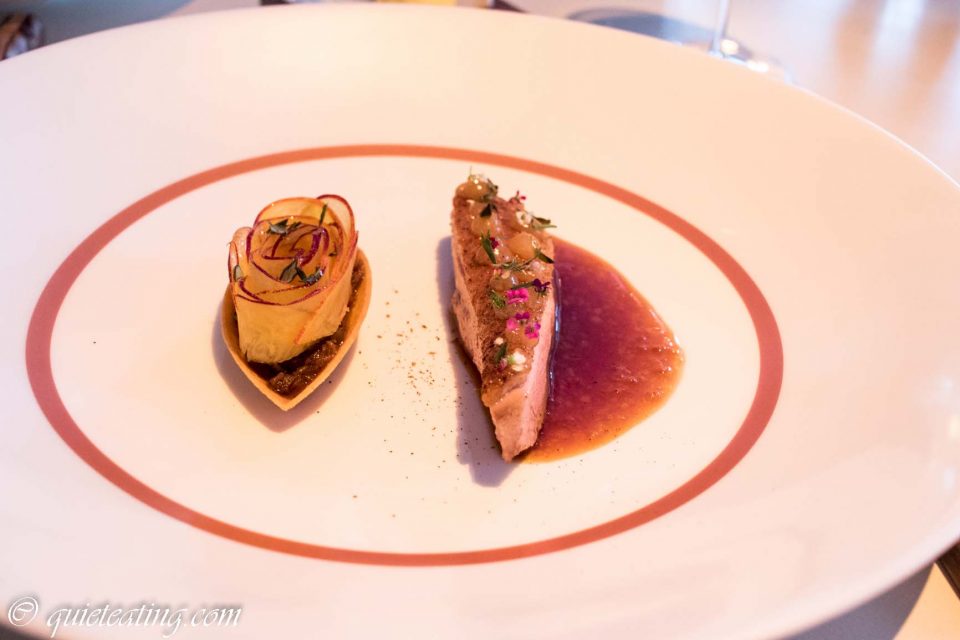 Duck and red grapes, thyme, honey, Timut pepper.  This was a timely arrival as my dining companion and I were waiting for signs of the meat.  This was to be the other highlight dish as the duck was carefully pink in the centre, juicy and delightfully soft as my knife easily carved through it.  However, it was the tart on the left which was inspired.  The small pastry filo with carefully carved fruit on top combined with the bird in my mouth to create a symposium of taste. 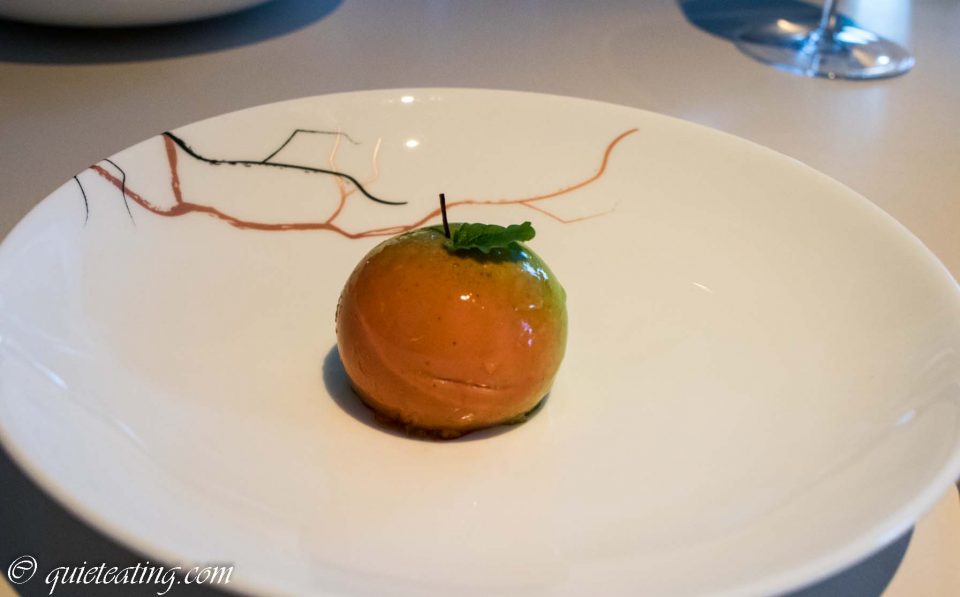 ‘Core apple’.  As a pre-dessert comes this carefully sculptured apple.  Inside, was a custard?  A cream?  Or perhaps I should just say, something that tasted rather good.  It reminded me of a savoury version of the meat fruit from Dinner, shaped as it was to resemble a fruit. 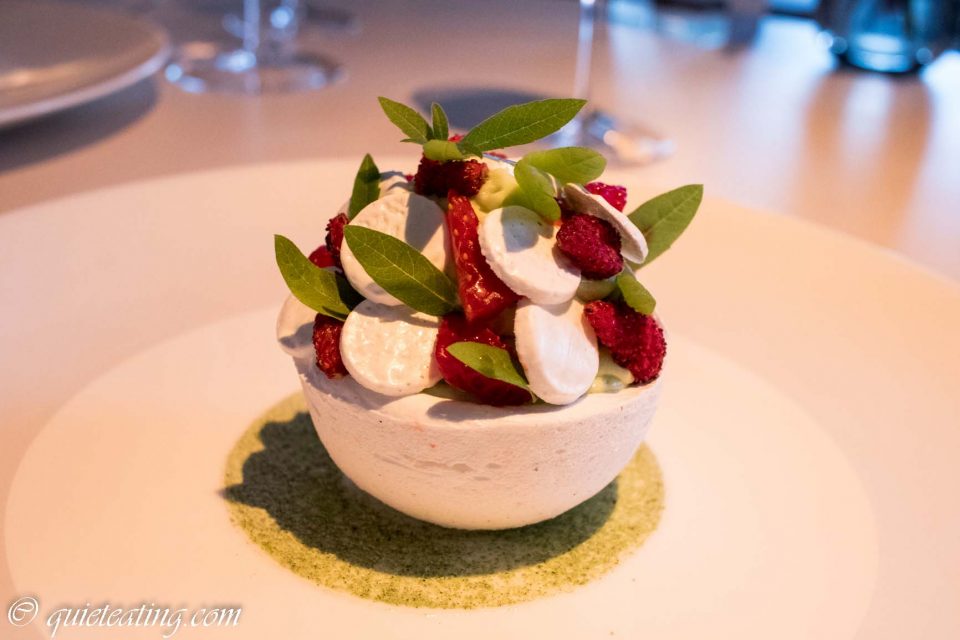 Wild strawberry, lemon verbena.  Delicately arranged and again showing the minutiae of attention to detail, this was a joy to behold.  Just look at those delicately arranged leaves amongst the white and red.  I would have preferred a heavier dessert but this was a clean way to finish.  It left very little lingering taste.  I admit to feeling a bit peckish at the end, much in the same way I did at Royal Hospital Road.  Yet, perhaps this was because I didn’t stuff my face with the bread as I longed (and wished) for much but was ultimately disappointed. 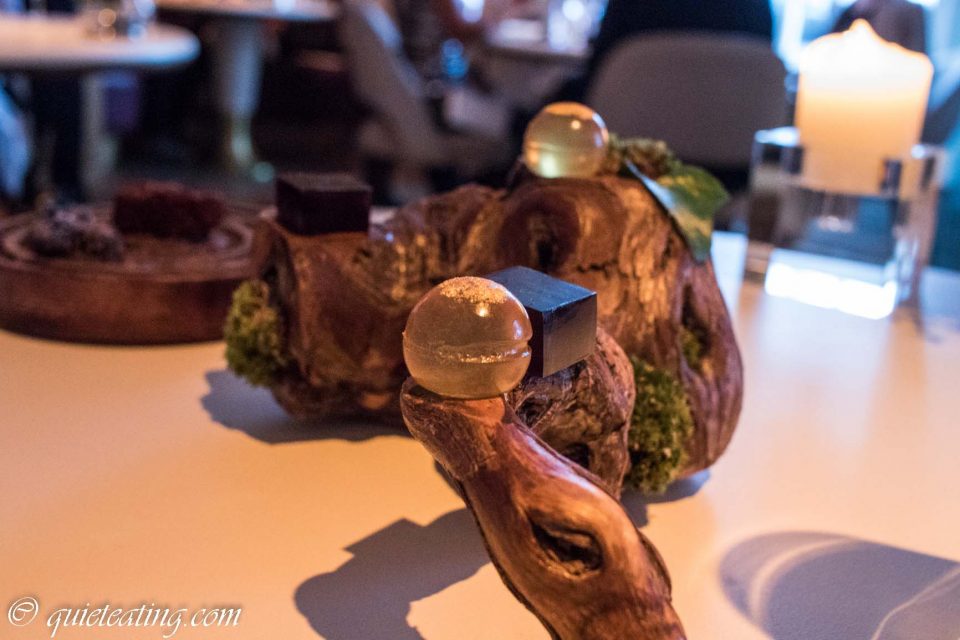 Wine gums.  Presented on a twisted piece of wood, these were nothing special.  Then again, I do not professes to have much taste and discernment for gums. 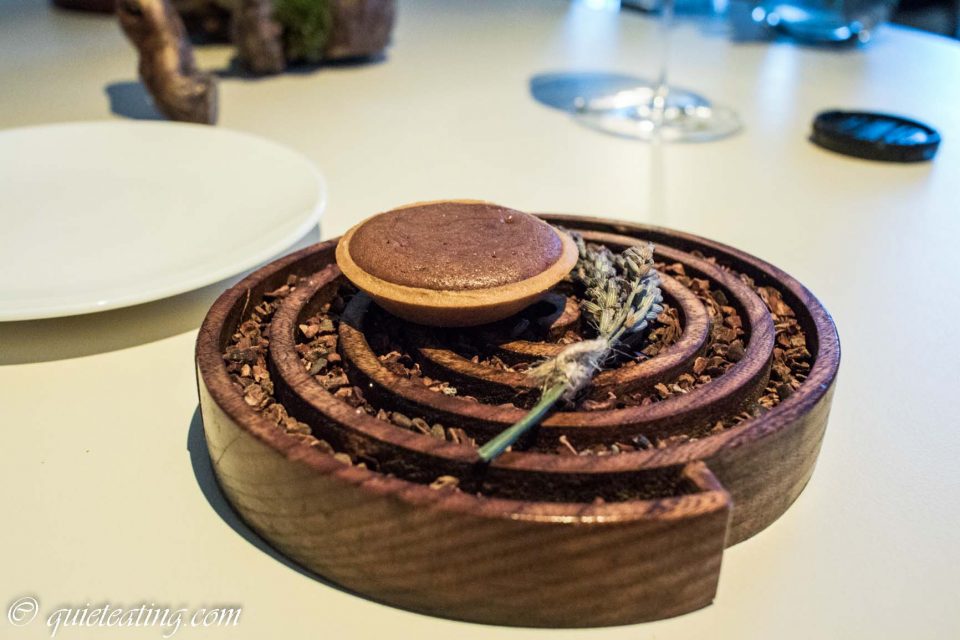 Chocolate tart.  Nothing special for the final act of this meal even with the perfunctory sprig of herbs on the side.  Looked a bit sad hanging out as it did all by itself.

Soon after I had popped this tart into my mouth and so cleared the table, the bill arrived without a word.  Now, I am used to having such a passive aggressive action happen in Chinese restaurants but not so when I am having a meal which costs close to 10x the price.  I would hope that that amount of cash would buy me a little bit of time to tarry.  Yet, when we asked the waiter what the hurry was, we were informed that we would have to leave by 9:15pm, so presumably another patron head over heels with giddy delight at scoring a table at Clare’s could sample the delights.

Although we left before having to be unseemingly forcibly escorted out past the next eager patrons, if I had passed them I could have saved them the time (and expense) with two whispered words.  “Only once”.