I was celebrating a special day (no I’m not bald yet) and as part of this I was in for a little surprise.  In hip and trendy Shoreditch, my dining companion untied the metaphoric blindfold to present me to Lyle’s.  Or perhaps I should say present Lyle’s to me.  I admit that I was very curious about where I would be at the end of my mysterious trip.  It reminded me of a bad blind date.  Thankfully such fears were unfounded. 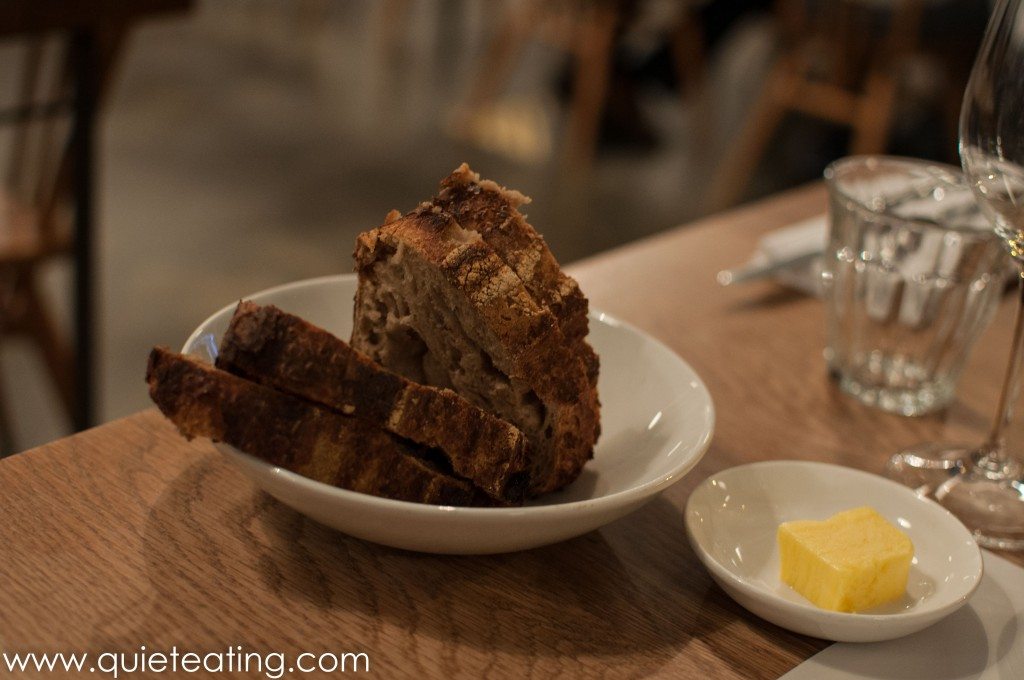 Lyle’s.  I thought it was a sugar brand?  I admit I harboured fears of the restaurant being some gimmicky add on to the sugar factory.  Such thoughts were dispelled by the lovely house bread.  A soft and chewy centre belied a crunchy crust.  With a touch of butter, this was some of the best bread I’ve had in a while. 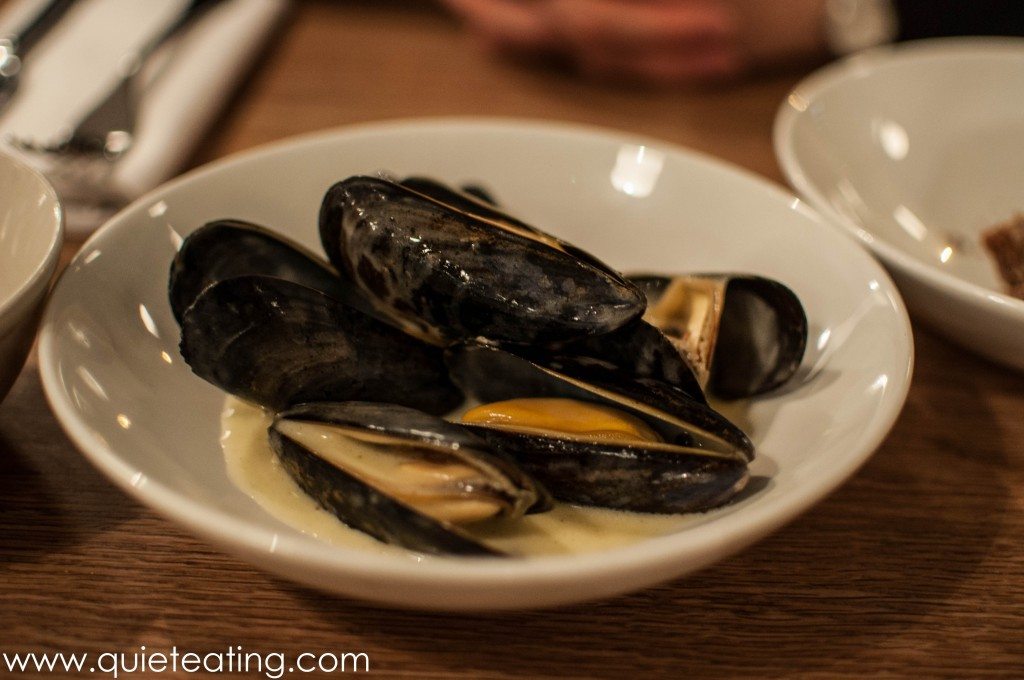 Creamy mussel snacks.  These were some of the freshest mussels I have eaten in recent memory, sweet and succulent.  The creamy sauce complemented the shellfish and only added to the smooth taste.  Having finished my portion, I admit to greedily and hopefully looking for more.  Instead it was time for some more surprises. 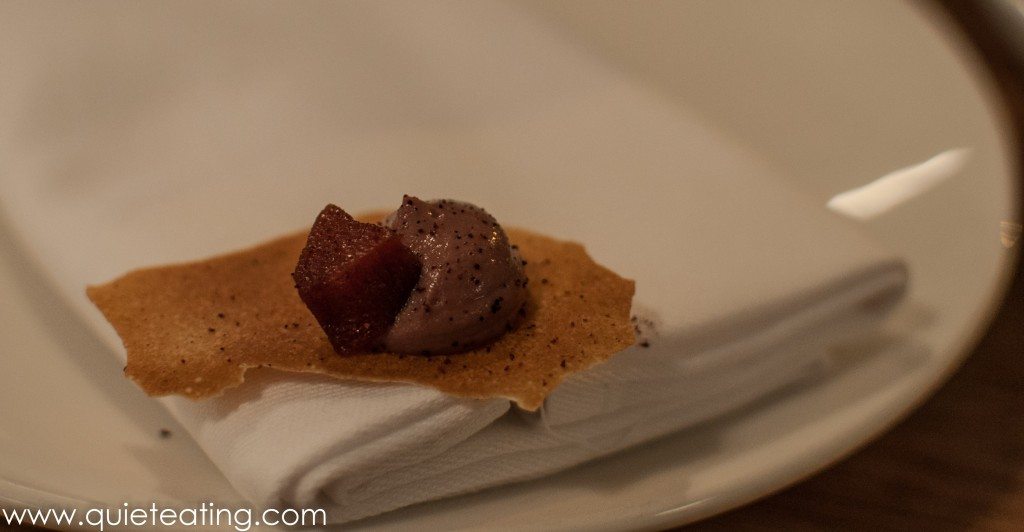 Duck liver crisps.  Providing a meaty counter point to the lighter mussels, these crisps exploded with liver taste in your mouth.  I was a happy man with both a delicate sea food flavour and deep meaty longings being satisfied so early in the meal. 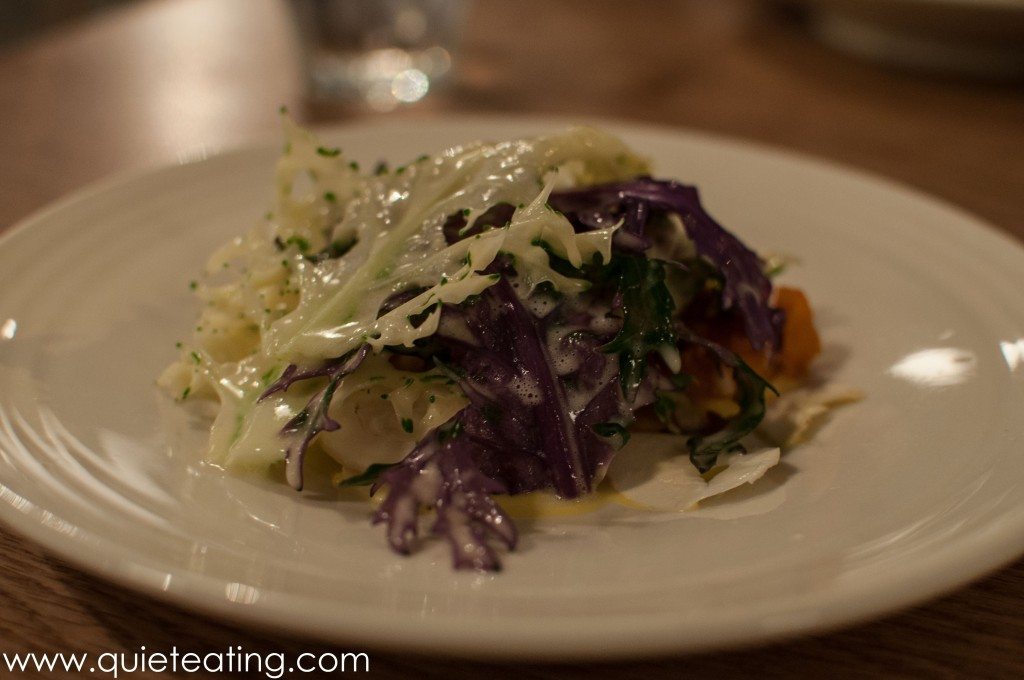 Pumpkin, whey butter and chestnuts.  The pumpkin is a bit hard to see because it is buried under the leaves.  I guess with Halloween just past, there are lots of pumpkins in need of eating, so I braced myself for some mediocre dish.  How wrong I was.  The pumpkin was so carefully cooked with the butter that it was savoury instead of sweet!  With its lovely soft and moist texture, it was a bit like eating a savory cake with butter syrup. 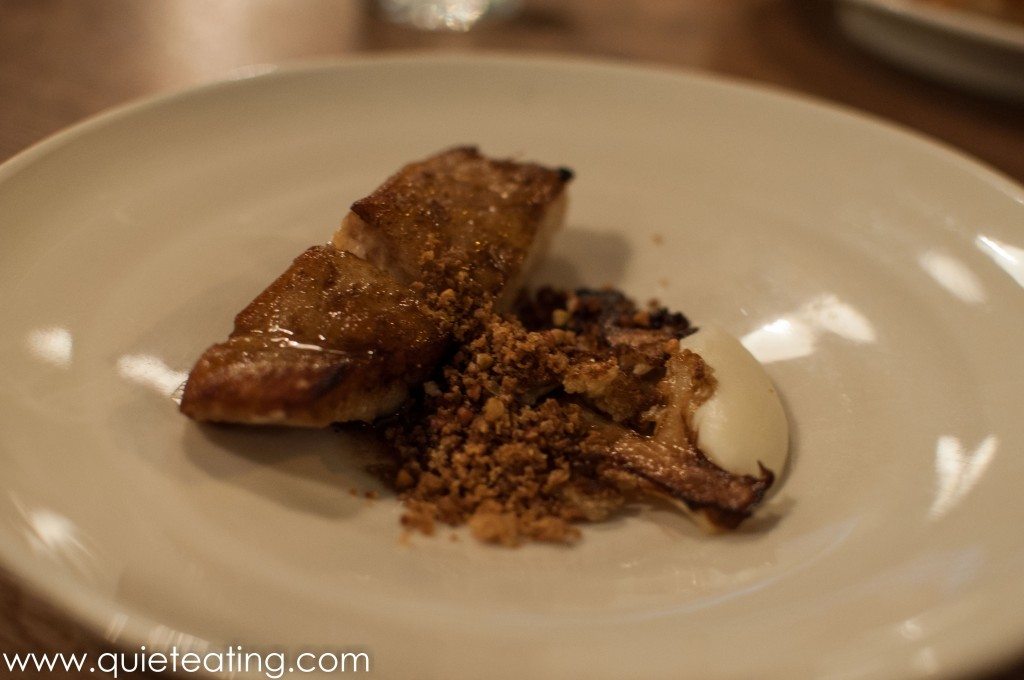 Brill, cauliflower and buckwheat.  Someone had carefully removed the bones from the brill but I was most impressed by the grain.  The buckwheat was an inspired choice.  The little roasted kernels added a delightful crunchy contrast to the soft, flaky fish and combined with the cauliflower, provided a delightful grain like complement to the brill. 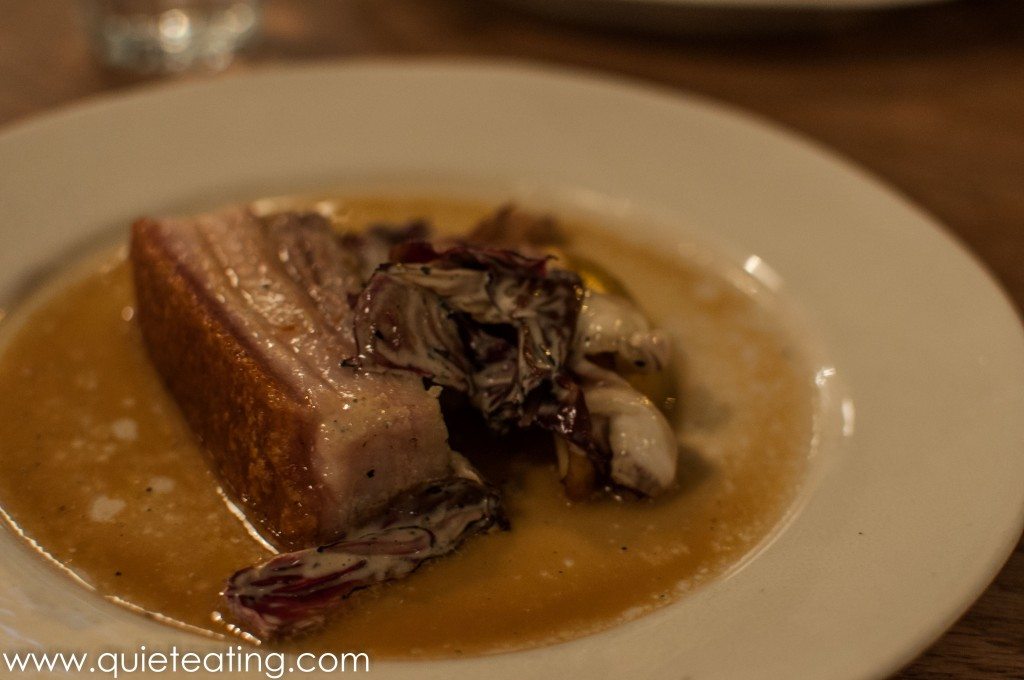 Mangalitsa, radicchio and anchovy.  The dish again surprised me as the fatty pork belly of the mangalitsa went well with the slightly tart sauce, crispy skin and anchovy.  The quality of the pork was evident as there was no excessive fat but instead just the right amount to add flavour and moisture.  The lovely chicory leaves and anchovy provided a healthier alternative to assuage my guilty conscience after I stuffed my face with pig fat. 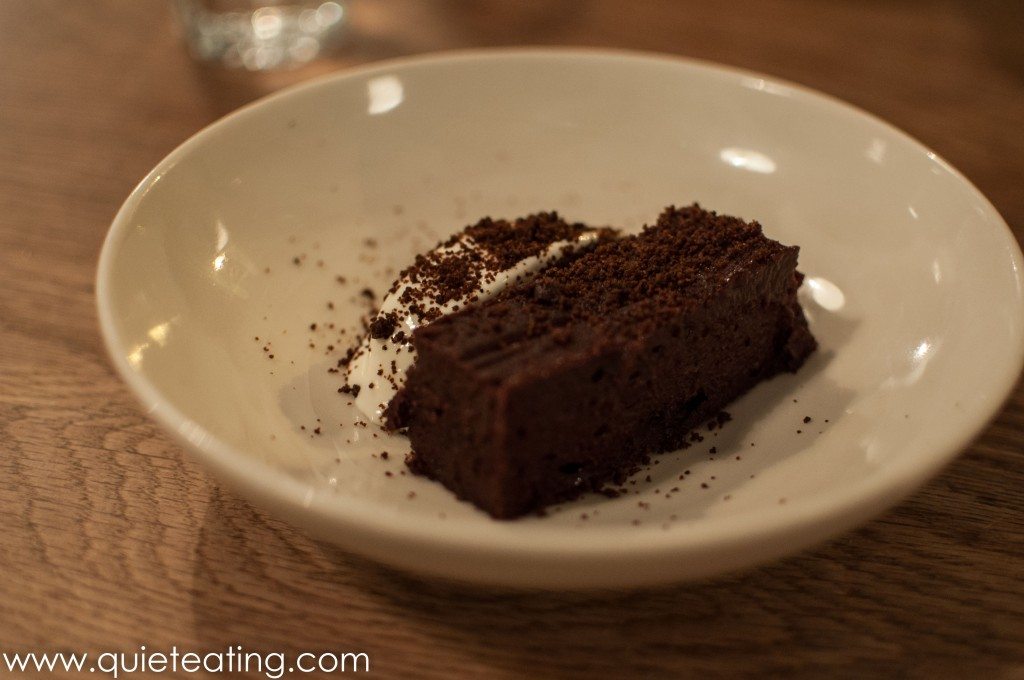 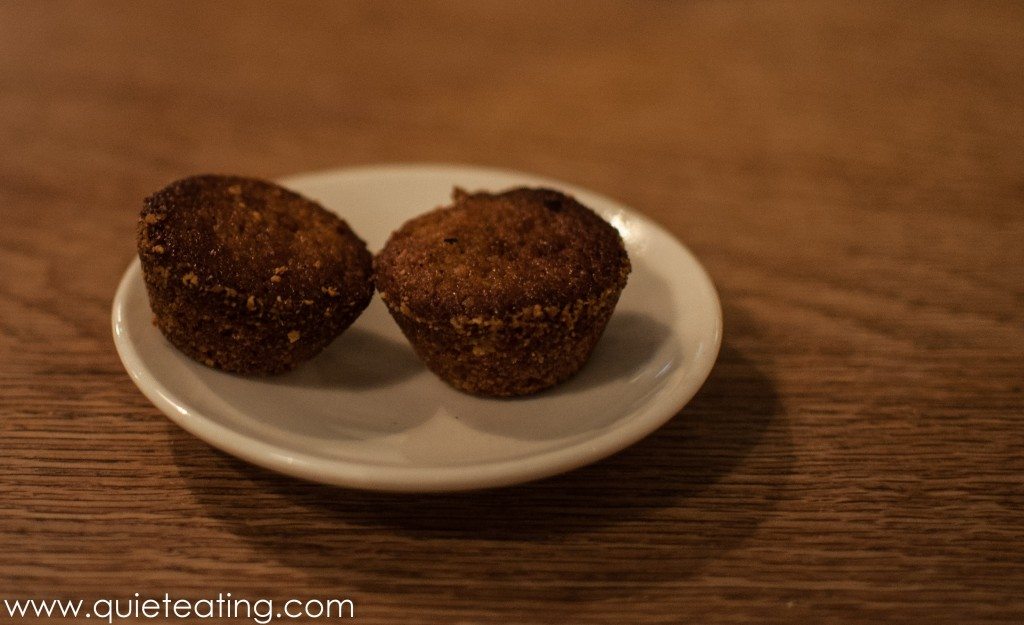 Madeleines to finish.  I didn’t catch what they were made out of but that doesn’t matter.  You will just have to accept my very scientific description that they tasted very good.

After I finished my meal, I was informed that Lyle’s was one of the newest restaurants awarded a Michelin star.  I can definitely see why as this is well deserved.  Try to catch it before the hordes descend because this is what this restaurant deserves.

Dinner (4 courses) was GBP44 without service or drinks.

Addendum: so thrilled I was with the experience, I visited 2 weeks later to try the lunch.  I was disappointed. I would rate the lunch 7/10 as compared to the dinner 8.5/10.  I have subsequently reappeared for dinner another time and would also give it a 8.5/10.  Go for the dinner rather than lunch.