I was feeling somewhat melancholy on this day so that was one of the first words that popped into my mind when I heard the name of the restaurant.  As I was somewhat annoyed with the world (not an unusual occurrence), I thought to try and cheer myself up by filling my stomach.  So as a sister restaurant to Brawn, which went down so well, I thought to give Lorne a chance.  As an additional positive, with such jaunty font, sadness would surely be dispelled as it would be so out of place. 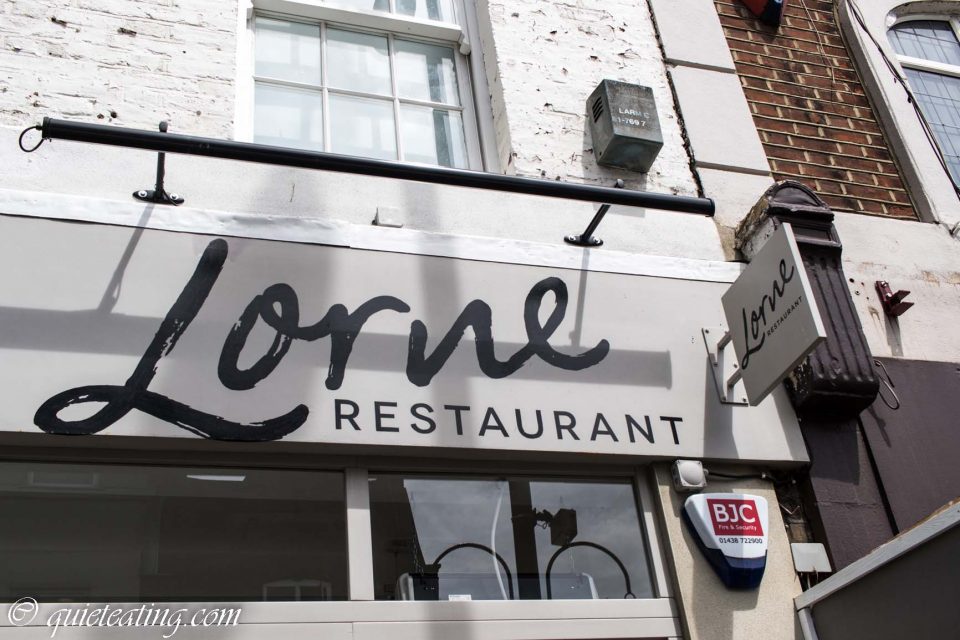 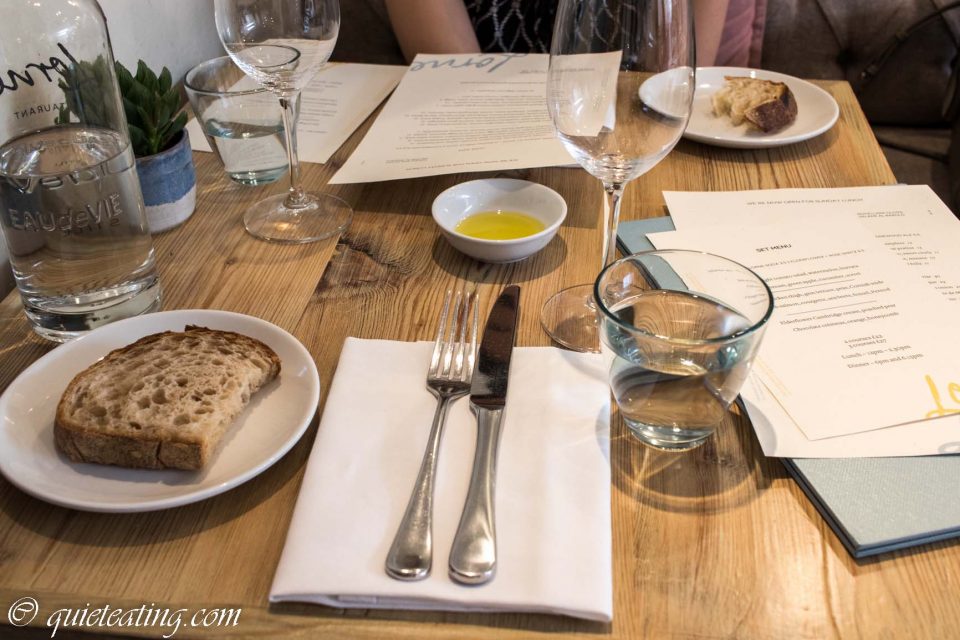 However, it wasn’t off to a good start.  The bread, you can see sadly sitting there, kind of tasted just as it looks.  Rather limp, flaccid and nothing special. 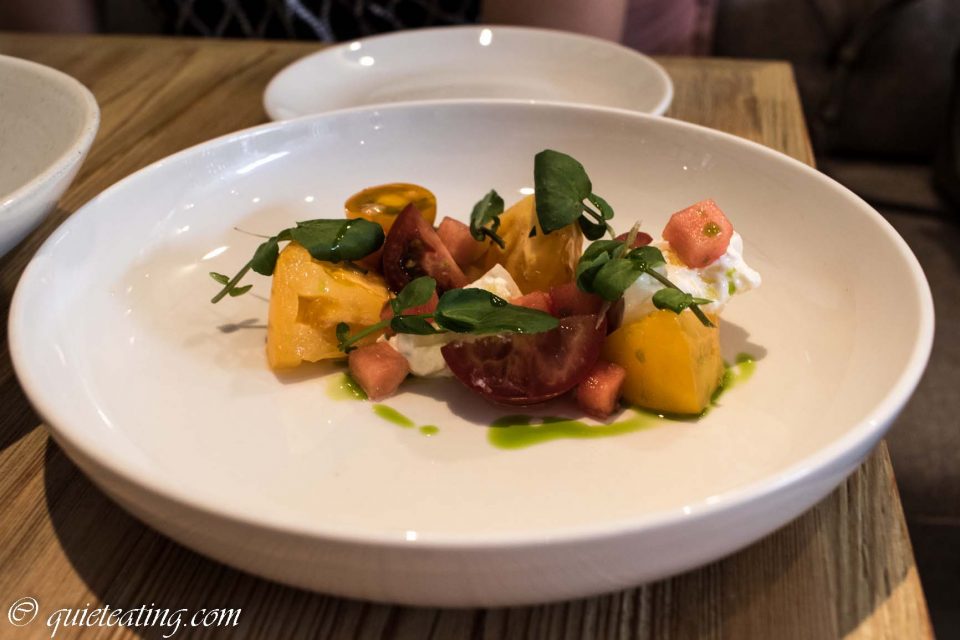 Isle of Wight tomato salad, watermelon, burrata.  Yet there was hope.  I used to turn up my nose (flat and difficult as that is) at tomatoes.  However, that was before I become acquainted with what a real tomato is like.  Not the almost tasteless, worthless specimen often found at supermarkets but instead something so different that it was almost like comparing apples and oranges.  Or bananas and carrots.  Or cheese and watermelons.  I’ll stop there as hopefully you get the point.  The tomato was so far away from its lesser cousins that it almost seemed to be a different species, so much so that the best of them can almost be mistaken as meat.  This was an example of the latter which evokes fond memories of the same at Social Eating House. 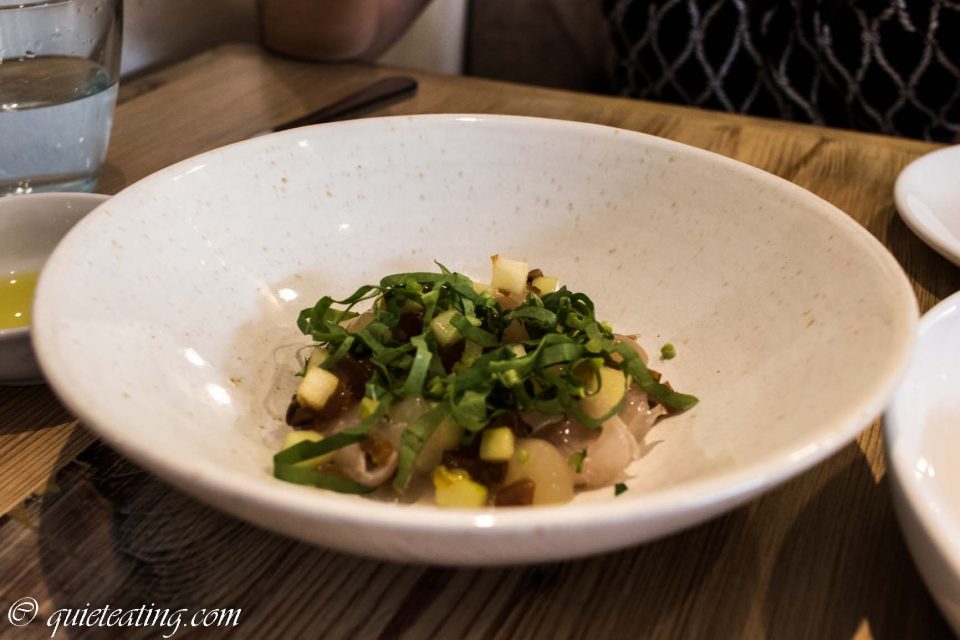 Cured bream, green apple, cucumber, sorrel.  I felt that this was a missed opportunity.  The cured bream could have been so much more.  Instead, it just seemed rather listless and sad.  Perhaps its cousin was the bread.  Although others complain that I am rather unkind, if I was feeling charitable, I would say it was ok but unfortunately nothing more than that. 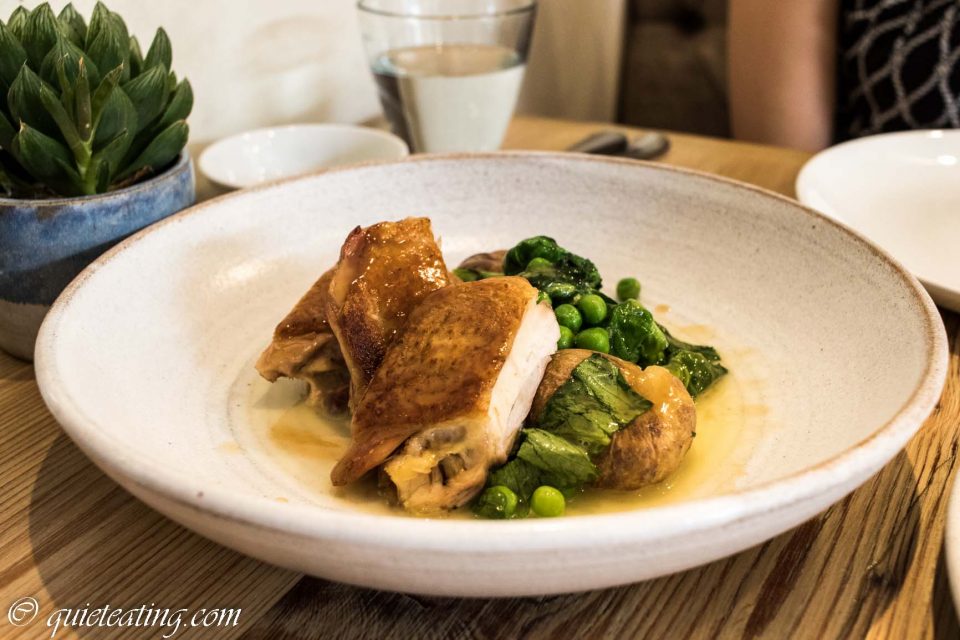 Crispy chicken thigh, gem lettuce, peas, Cornish mids. Ok.  What are Cornish mids?  I have now been educated in a less brutal manner than learning about King Edwards.  These are potatoes but what potatoes they are.  Delightfully firm, these complemented the moist chicken nicely.  You might wonder at my relatively brief and circumspect description of the chicken.  That’s intentional as I couldn’t really think of much more to say about it than it wasn’t dry.  It wasn’t bad but was just not memorable. 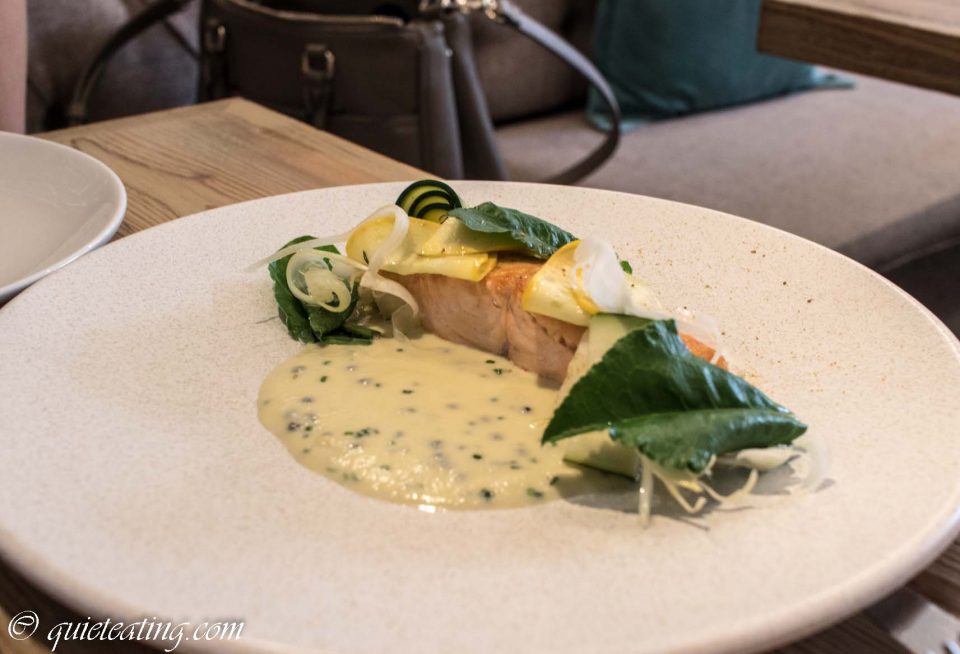 Scottish salmon, courgettes, sea beets, fennel, Pernod.  Salmon.  Cooked delicately pink inside with a light and creamy sauce.  Quite a nice meal if rather insubstantial as it was a little lonely by itself and could have done with a little extra on the side.  Perhaps the Cornish mids previously mentioned? 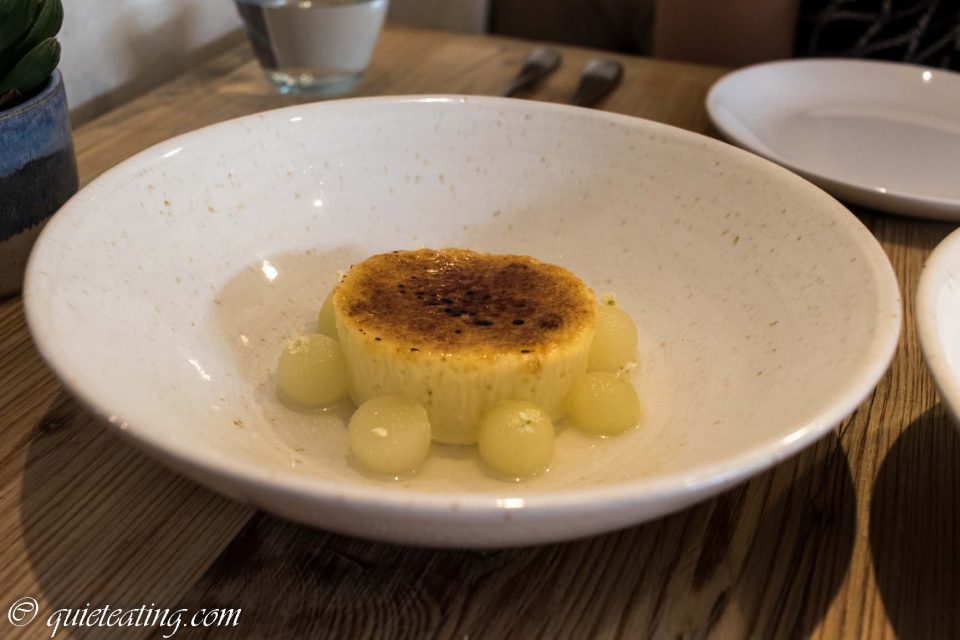 Elderflower Cambridge cream, poached pear.  Surprising texture, with crunchy glazed sugar coating surrounding an interesting phase of matter.  It wasn’t quite a liquid but hadn’t made the jump to being a solid.  Instead, it sat, almost confusingly halfway between both.  Thankfully, what was not confusing was the taste as it was simply, rather good.  The cream combined with delicate small balls of succulent pears produced something delightful. 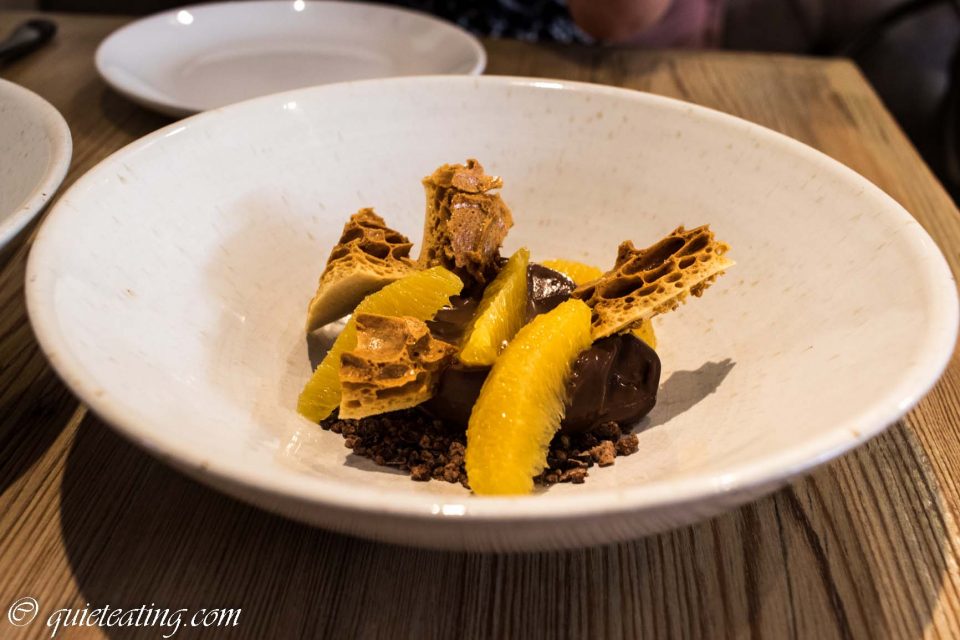 Chocolate cremeux, orange honeycomb.  Deep chocolate flavour complemented by the honeycomb and the orange pieces.  Simply done, great for eating as the sweet and tart, crunchy and smooth flavours and textures mixed together well.

As we left the slightly less than busy but not quite deserted restaurant, I had an uncomplimentary thought.  My dining companion remarked sarcastically that they were surprised that the hordes were not banging down the door.  Although on balance, not a bad meal, there were more misses than hits in the meal.  Which meant that I went away not particularly enthused. I left slightly despondent and depressed.  It wasn’t bad but just wasn’t much to laud to others about.  Not that it was that horribly precise word of bad but let’s put it this way.  You could do worse.  Yet far far better.