Princi is so old and well known that it is an institution in Soho.

I remember those many, many years ago when I first arrived in London, I would stare with famished hunger at the food as I was swept by their floor to ceiling windows in Soho.  Not a place that a poor student could afford.  Neither did I loiter in fears that I would be quickly chivied along.  Those were the days…

Later on, when I had a job, I returned.  However, the problem now was that although I had the coin to pay, I couldn’t find a spot to sit!  I was now caught in that conundrum.  Either having time but not money (destitute student) or a little bit of money but no time (unhappy city worker).  So it seemed that Princi was never to be.  Such a shame as a glimpse through their window would continue to tempt me.

Lucky for me, in a recent Easter break, I found myself hanging around London.  Interestingly, it seemed like most of the city dwellers quickly evacuated the city the moment that the Easter holiday started.  Made for a great time for those still in London.  That is if you could find a place still open.

Having bummed around elsewhere to enjoy the lack of crowds, I then thought I might try my luck walking by Princi.  Perhaps there might be a seat!.  I was lucky that I decided to take a chance, as I now have another eatery to add to my list of recommendations. 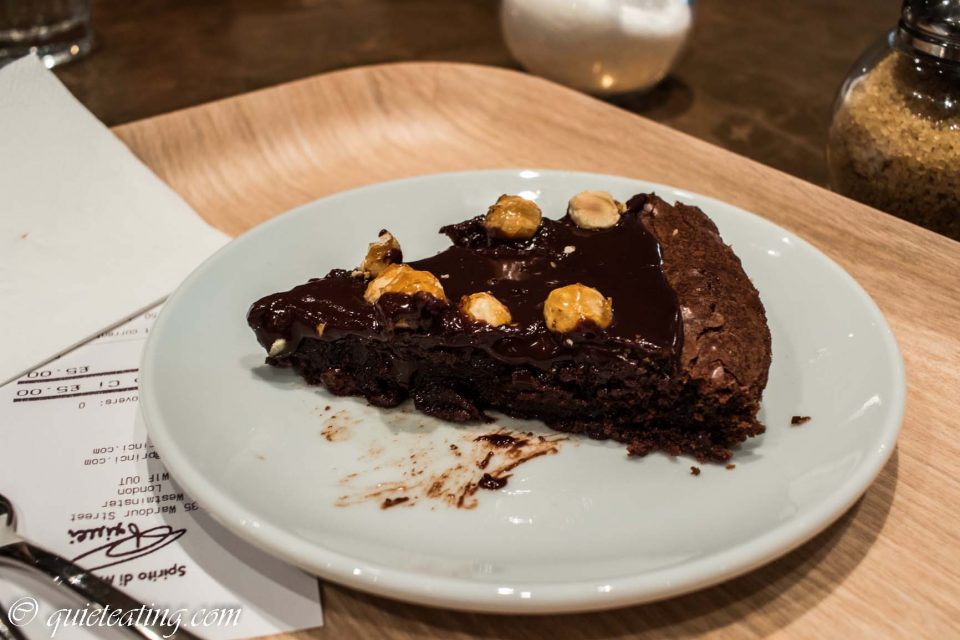 Hazelnut chocolate tart.  Lusciously rich, crunchy nutty hazelnuts, firm base, this has to be one of the best chocolate tarts I have ever had.  The meltingly soft chocolate drew me in, the nuts were the icing on the cake.

Unfortunately, as this was only meant as a dessert stop, I had previously stuffed my face with other lesser foods, in preparation for being turned away once again.  So with my stomach full of rubbish, I was unable to sample the almost uncountable treats on display.  I guess it means that I will have to come back.  Yet, that brings up another problem.  If all their offerings are like this, I might end up twice the man I am today.

A slice of cake was GBP5.