I seem to be on a bit of a roll at the moment.  After dipping my toe into the hipster food scene, I seem to have taken an unintentional headlong plunge into the pool.  That’s the danger of not looking where you are going.  I think that many Londoners could learn from my example.  You might inadvertently trip – this is how I ended up at Duck and Rice.  A fairly interesting name for a restaurant.  As you may know, I do tend to subject restaurant names to scrutiny when they are particularly interesting.  Not particularly imaginative but I guess there could be worse.  Like when The Fire Station invites particularly snide remarks, but that’s another story.

When I first arrived at this trendy restaurant (just see the front entrance), there were no staff to be seen. 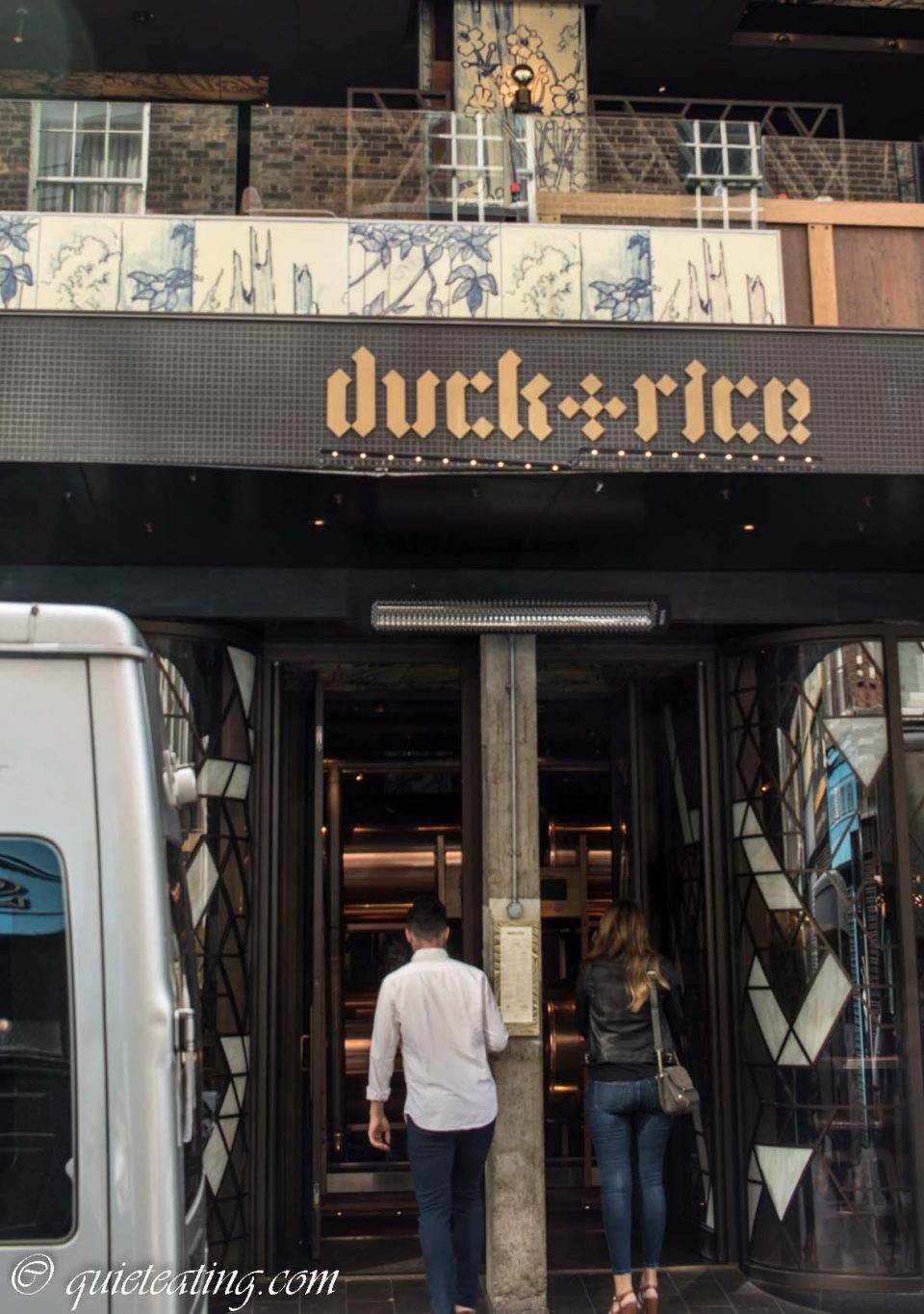 I also felt somewhat underdressed.  All the male diners seem to be wearing collared shirts.  The ladies were in somewhat high heels.  I was in my t-shirt and Converses.  Perhaps my state of preparation was to explain my reception somewhat.

Feeling a bit lonely with the deafening silence on the ground floor, I then climbed the fairly narrow and steep spiral staircase to the first floor in search of anyone who seemed to know what they were doing.  Arriving on the upper landing, it was clear that there was a particular contrast in energy between the levels.  Whereas on the ground floor I was alone in my solitude, on the upper level, things looked a little more frantic.  As I accosted one of the waiters by having to almost physically tap him on the shoulder (as glances, which progressed to waving of hands did not have any effect), I was then told to follow him.

As he drew level with the stairs and started his descent, I did ask him if that was really necessary.  As it didn’t really seem like people were eating on the ground floor.  Instead, just partaking in liquid courage.  However, in his no nonsense tone of voice, he directed that I should follow.  When I got back down and he then checked the reservation on the computer, he then bounded back up to the top.  I followed in silent exasperation.  Returning to the first floor again, I asked him why this rather convoluted path was really that necessary.  The answer – in keeping with other hipster places I had been – was fairly nonsensical.  “You have to register on the ground floor”.  At least he didn’t say that this stairwell was a necessary rite of passage… 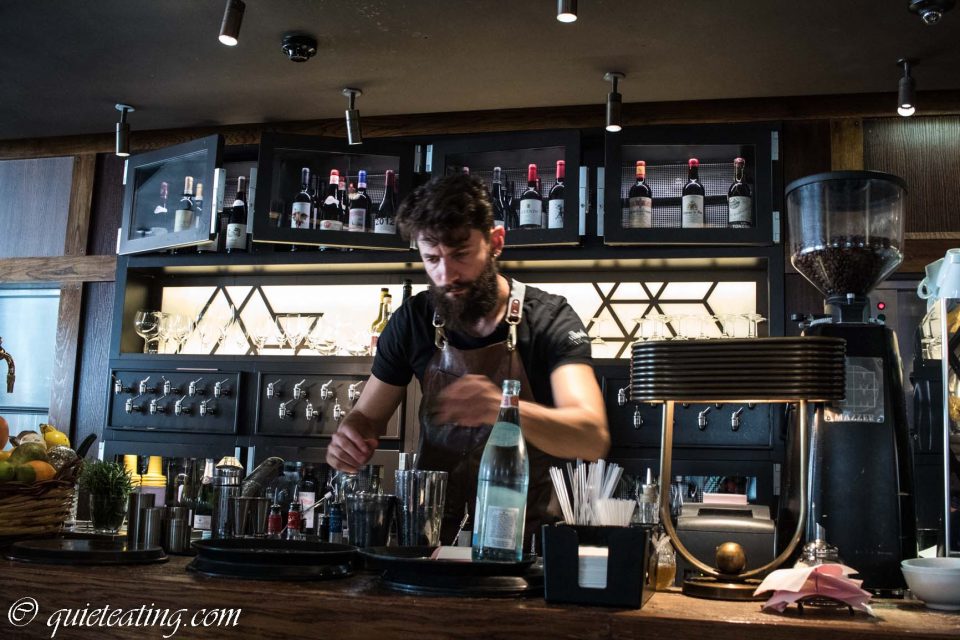 So, attempting to put this all aside, when I was finally seated, I was treated to a fairly cramped, dark and weirdly soft bench.  Fashionable and contemporary this definitely was.  Comfortable and conducive to conversation it was not.  You are forced to sit side by side and face the corridor, often filled with scurrying waiters.  Although this might be ideal if you harbour romantic aspirations for your dining colleague, it is less than beneficial should you actually be there to have a chat over food.  In this noisy environment, it is somewhat hard to hear the other person speak when you are facing away at a right angle. 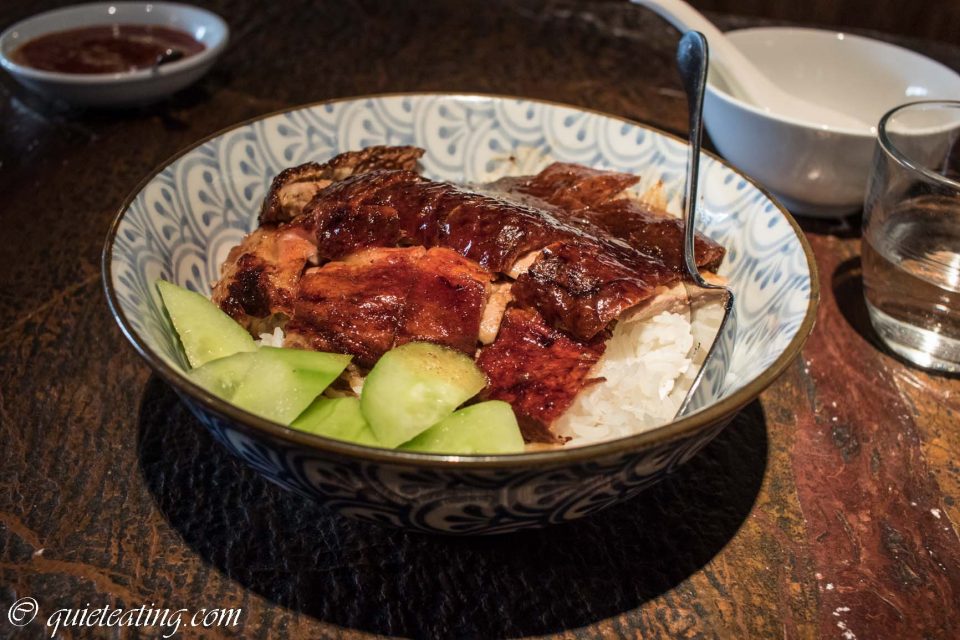 Duck and rice.  Given the name of the eatery, I felt I had to have their archetypal dish.  This was.  Duck. And. Rice.  Although you may think I am being skimpy on the details here, there is a reason for my rather sparse comments.  There just isn’t that much to say about the food.  Its taste was ok but it was badly overpriced and unfortunately overshadowed by the decor and interesting (read horrendous) service.

I found the decor and crockery a bit weird.  It was a mix of distressed, industrial and Chinese elements, a rather fascinating mix.  Perhaps the thought is that distracting you with other things makes the food taste better.  Usually it helps when the ambiance complements the food.  Yet, maybe I am just being a barbarian here.  As I left, I tried to tell myself that at least this added to my repertoire of restaurants.  So the next time I am asked for a trendy, slightly edgy and cramped seat to eat, I would have a ready answer.  Duck and Rice, you need look no further.