How things have changed when the mighty are humbled.  Or the not so mighty at times.  In particular, service levels have really picked up across London as customers have become a precious commodity.  Sometimes it takes a little pandemic to make things better, service wise at least.

We ended up in Plum Valley (or perhaps I should say Prum Varrey) for the simple reason that on this rainy Saturday, this was the only restaurant open in Chinatown at 11:30.  Although initially apprehensive about returning given what had had happened last time, I overcame my fear in the name of research.  It was also raining outside, I had no umbrella, it was the only place open and I was cold.  However, such matters are secondary.

The service was markedly rather good, quick, prompt and efficient.  The food continued to be better than average for Chinatown.

Sadly the menu is reduced during Covid days and I was informed by the waitress, the fried stuff wasn’t available today.  Much mental anguish and metaphoric rendering of hair occurred, for a short while.  Then I got over it and tried to make the most of it.

It was the first dim sum I had had in a long long time.  Perhaps aided by a deceitful memory, this tasted rather good.  As it now seems like the shutters are going up again, on the otherside, I hope to return.  Sorry, weturn to Prum Varrey.

GBP16 per person for enough dim sum to make you happy.

How many words can you think of that are pseudonyms to merely not bad?  Above average?  Better than mediocre?  A bit more than acceptable?  A step above middling?

So this is how I found myself with the envious task for a serious lover of food.  Having to pick a restaurant that would be willing to tolerate a brand new baby (not that you can buy these off the shelf just yet).  It limited the choices somewhat.  So after much furious discussion, we decided to pick a place in Chinatown.  At least it would be relatively affordable so avoiding the insult of something expensive and fairly uninspiring.

One of my friends was particularly keen to help and asked around her various contacts.  One in particular stood out.  Prum Varrey.  Uhh what?  Prum Varrey!  Ok…  PRUM VARREY.  ok ok.  I get it now.  Which reminded me of an occasion I had recently.  Someone was trying to guess my accent.  Yes – I did spend some time growing up in Hong Kong.  Very astute of you.  Yet, I do take particular care to try and enunciate my words.  To avoid situations like the above.

Settling down for dim sum, this is what we had. 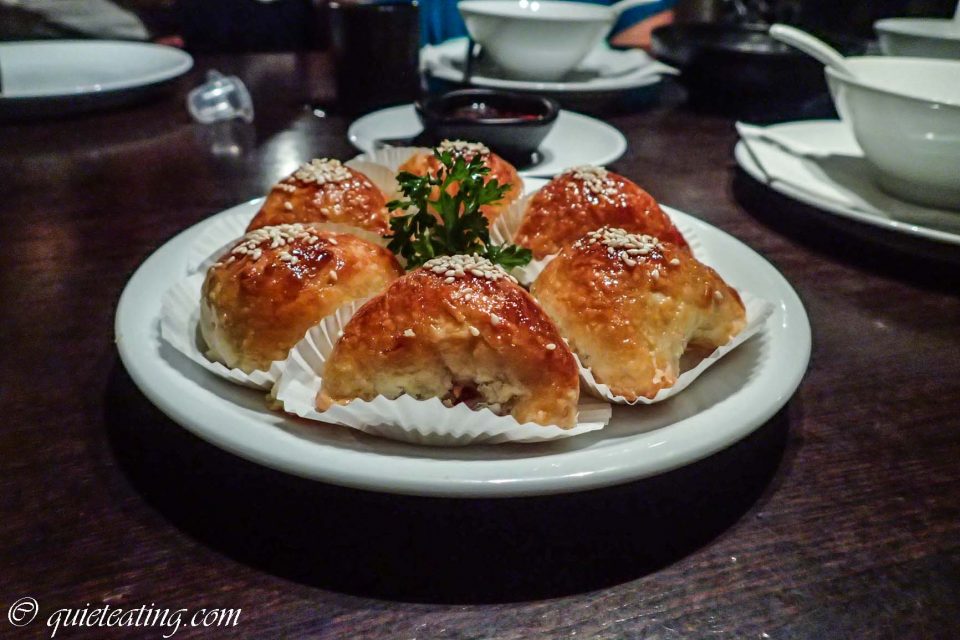 Char siu sou, honey roast pork puff.  At the start of the meal, we were impressed.  With crispy shell surrounding luscious meat and then set off by sesame seeds, this was not bad.  After this sweet treat I was hopeful for the future. 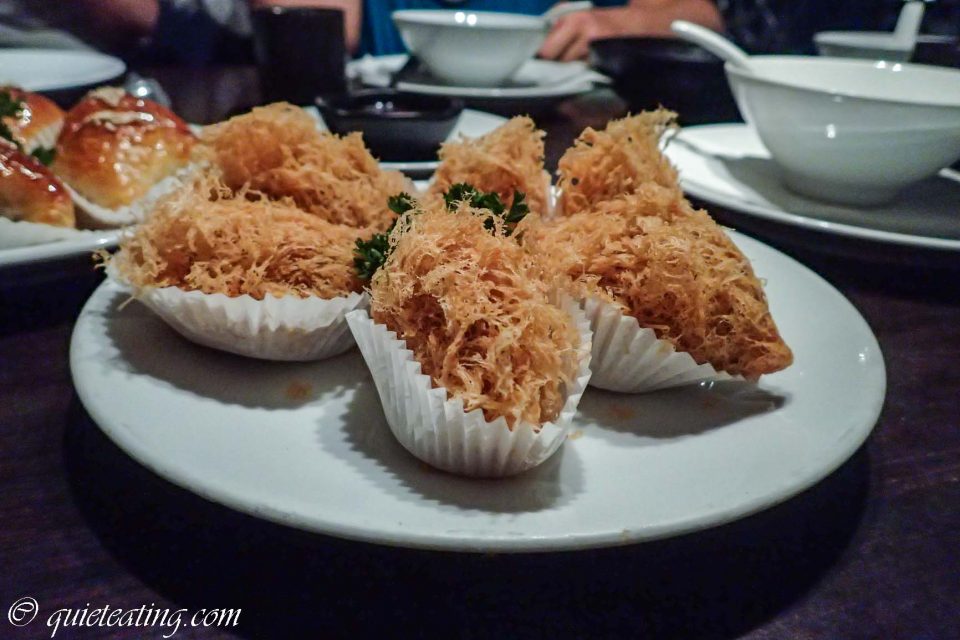 Wu gok, fried yam paste meat dumplings.  These were flaky, delightfully oily (but not too much so) and more than acceptable. 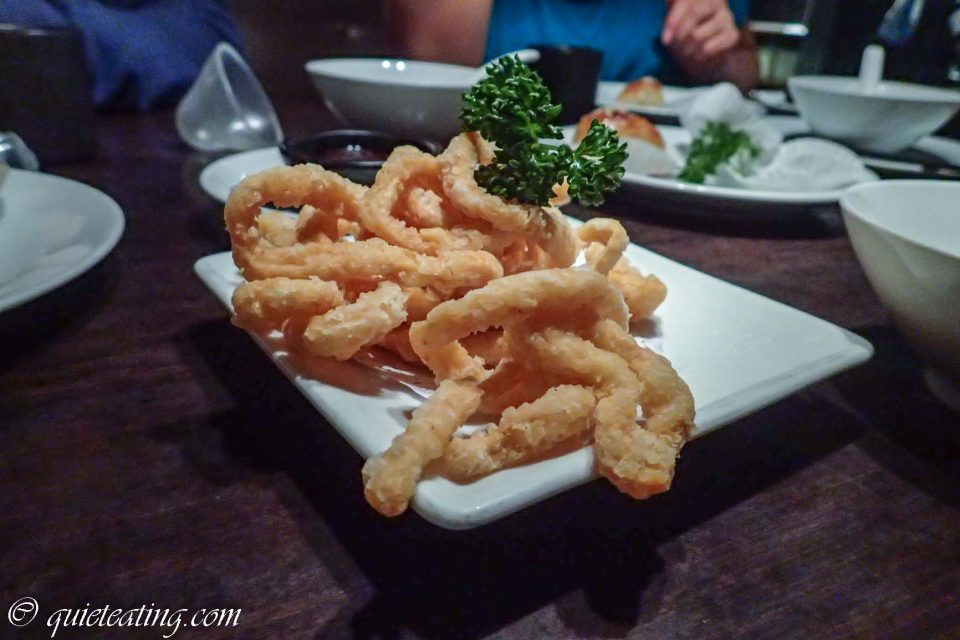 Fried squid.  Although you may debate about how much skill it takes to deep fry things, I have borne witness to how this task can go horribly wrong.  Thankfully not in this case, as these were a step above middling. 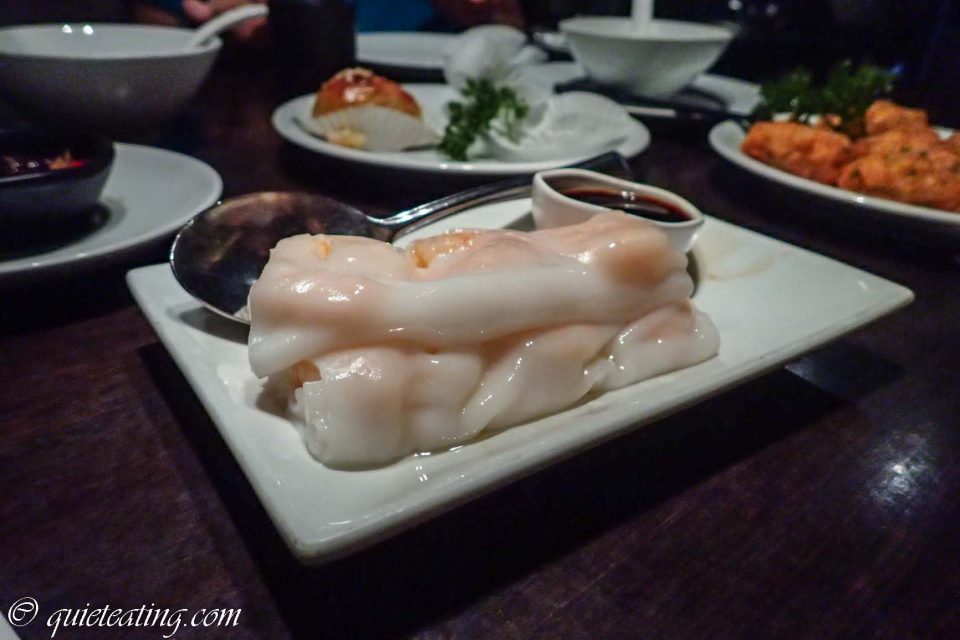 Har cheung fun, prawn noodle sheet.  Here is where I will have to start having issue.  As the prawns were rather flat, in taste, not shape.  They lacked the feeling of life that I had been spoilt with at Darjeeling Express, a real pity.  The bounce had been sadly cooked out. 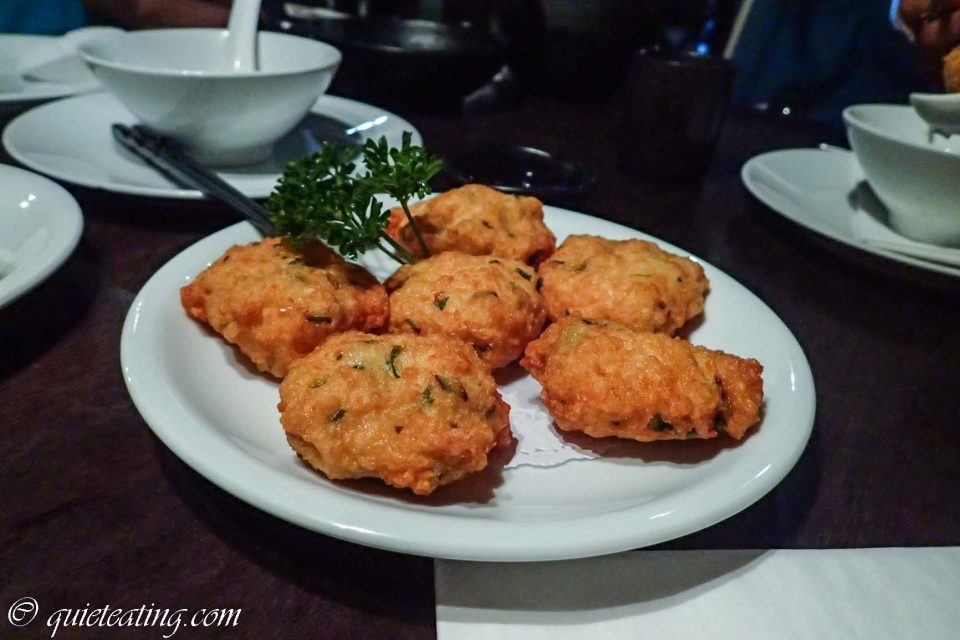 Minced octopus.  This was my first time trying these.  Although these were kind of indistinguishable to fish cakes to me.  Except that they tried to pose as something more.  They didn’t really succeed in their subterfuge.  I would avoid. 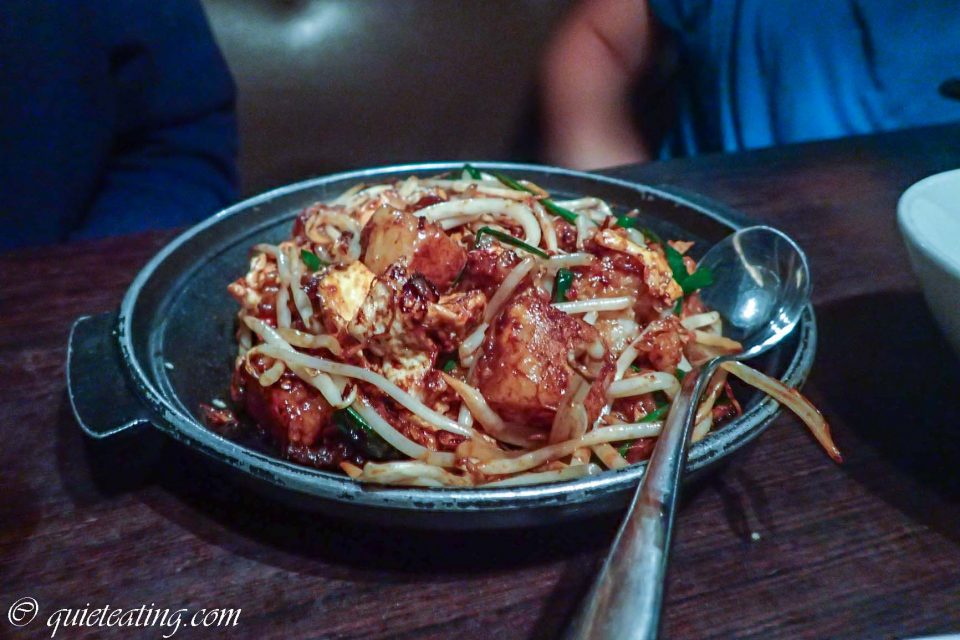 Loh bak gou, turnip cake.  This was, average.  Could have done with a bit more frying to enrich the flavours.  Instead, sometimes it tasted a bit like eating turnip paste, which isn’t surprising, as that is what it actually is. 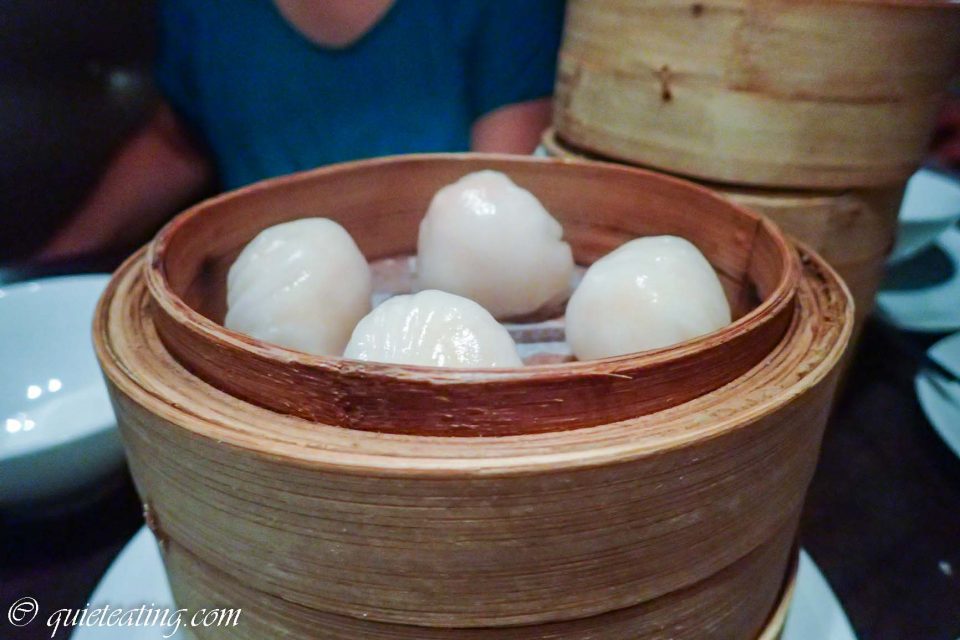 Har gao, prawn dumpling.  Bringing the meal up, the prawns here, although still disappointing as in the case of the har gao, was delivered in a more tastful package.  Soft, bouncy skin was a treat. 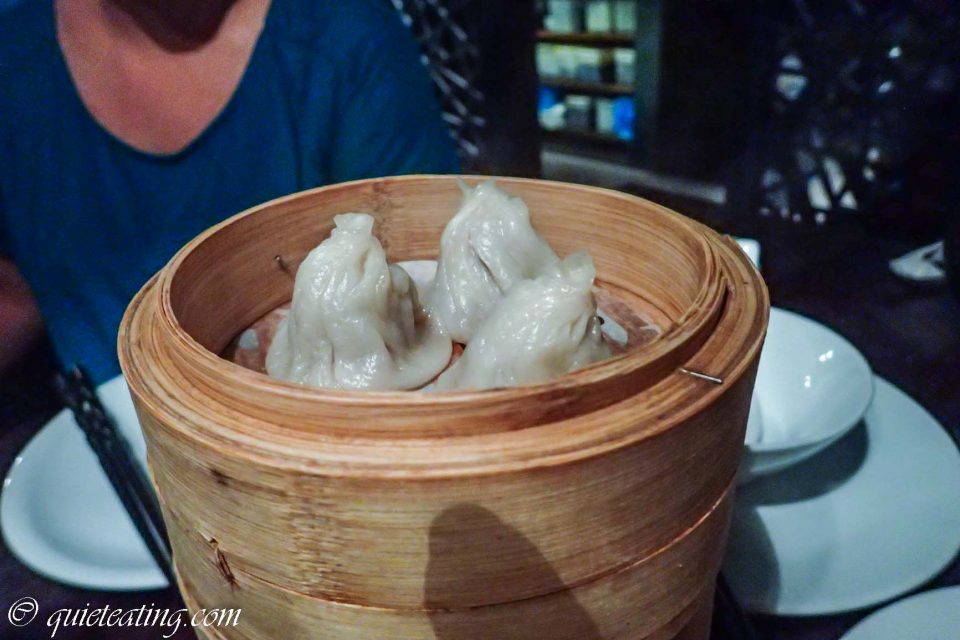 Xiao loong bao, shanghai pork dumpling.  Unfortunately they suffered from leaking issues.  Although I have particular fondness for this dish, the dumplings I picked were sadly rather dry.  Missing the soup, these were disappointing.  Goes to show that you should be careful with everything these days, not just your vote.

Throughout the meal though, as the dishes came and went, we managed to have a fairly pleasant social chat.  Unusual for Chinatown, it was actually relatively easy to hear the person next to you talk or chomp on their food, depending on your preferences.  While we traded gossip and barbs through the meal, we were soon reminded that life goes on.  I.e. restaurants are created to make money.  So I guess we shouldn’t take offence at the first veiled attempts to move us on and then a blunt telling off from the waiting staff for taking up space when there were so many other mouths to feed.  In summarizing up the meal, although the food was above average, the ambiance more than middling, the rather abrasive service brought the meal down.  I was tempted to draw their attention to the fact that we did have a cranky baby on hand and as all new parents know well, that is an instrument of mass destruction.  Next time I get asked to rudely vacate my table, I won’t be afraid to use him.

Lunch (1 piece of all of the above) per person was GBP12 excluding drinks and service.