Him.  Her.  Indeterminate person.

Usually used with particular vitriol, this pronoun can be used with venom to display dislikes.  I can’t believe what HE did.  Why did HE think parking the car on top of a fire hydrant was a good idea.  SHE did the unthinkable.  That’s not the way to barbecue meat, it’s meant to be charred, not delicately pink…  And so the recriminations go on and on. 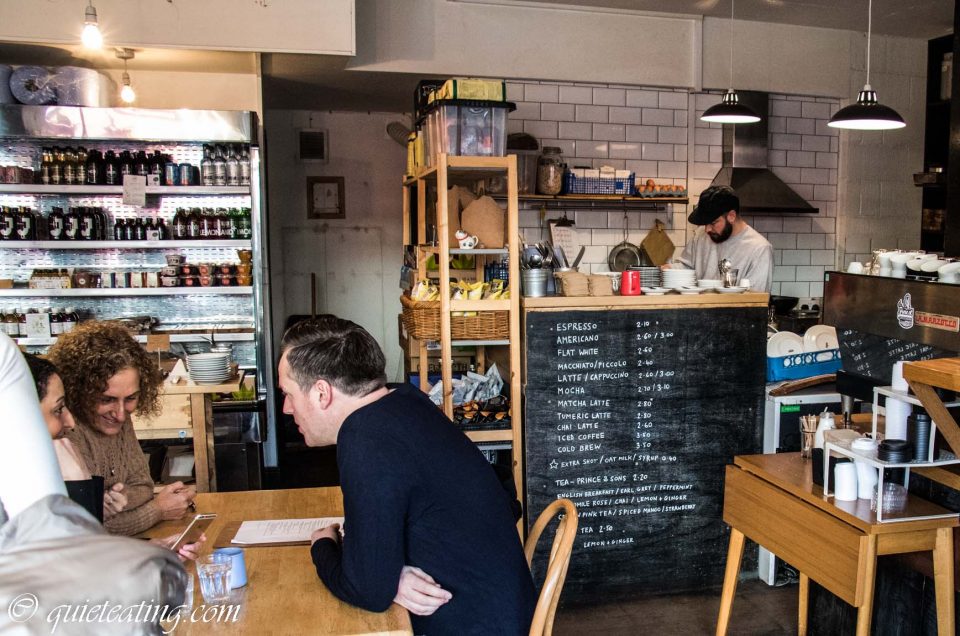 We had hoped that we could leave behind such hard words in a trendy coffee place.  A promising sign was a blackboard with artful chalk writing (I need to figure out what font that is).  It is clearly an establishment trying ever so hard to fit a certain type of image.

And they seem to be succeeding, as they were rather rammed at this joint.  Everywhere we looked, there were people happily listening to their music and perhaps in the ubiquitous sign of hipstersness, people sitting with MacBook and iPod.  To avoid accusations that I am being hypocrite, I write this on a computer I cobbled together myself.

Yet, as we were soon to find out, such an atmosphere does not come without a price.  Upon a preview of the place for a spot to place to sit, we spied a somewhat empty table at the back.  We asked if we could have this sans wood plank on top.  However, we were told quite abruptly, strictly and in a rather condescending manner, that place was off limits.  As it was explained to us, in case we couldn’t guess by the wooden decoration and its proximity (it was 10 metres away from the nearest sink), it was their coffee preparation area.  Interesting that an empty trestle table would be required for such a task. I simply couldn’t have guessed being as it was lacking in much, perhaps more accurately described as any, say, coffee equipment.  I found this response fascinating.  An ideal way to run your business especially when your cafe is full.  Might not stay that way for long. 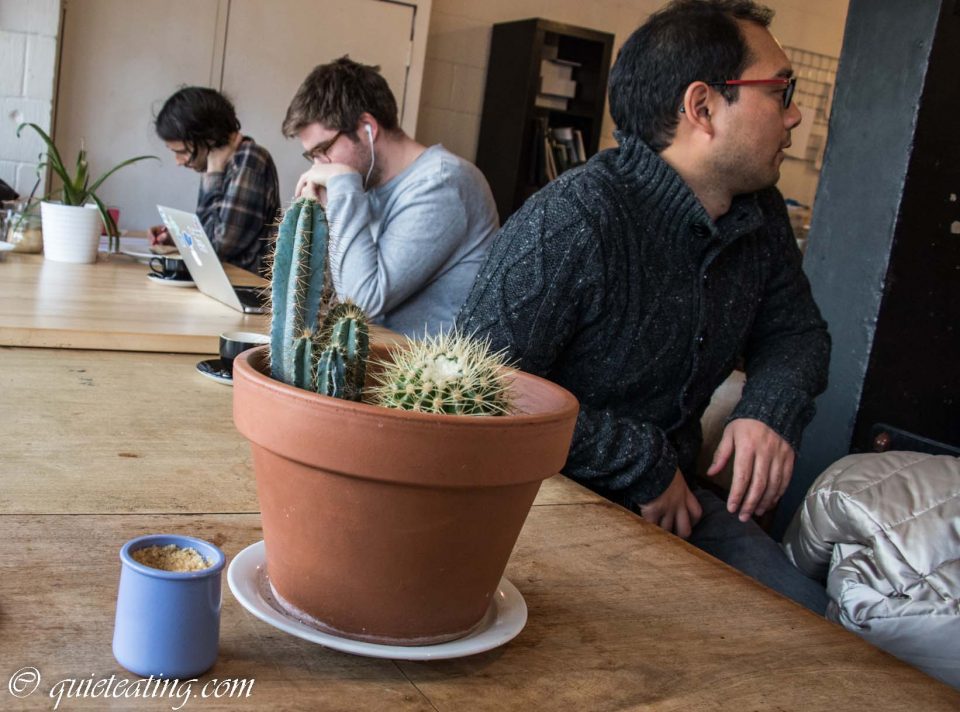 In keeping with the trendy nature of the cafe, I think the apt response to this type of customer service would be to facepalm.  Maybe I could do so with an added prop.  The cactus perched on the worn table seemed to be a suitable candidate.  Only issue being that it was slightly too unwieldy for me to brandish around readily.  So I dropped that thought and proceeded to have some tea. 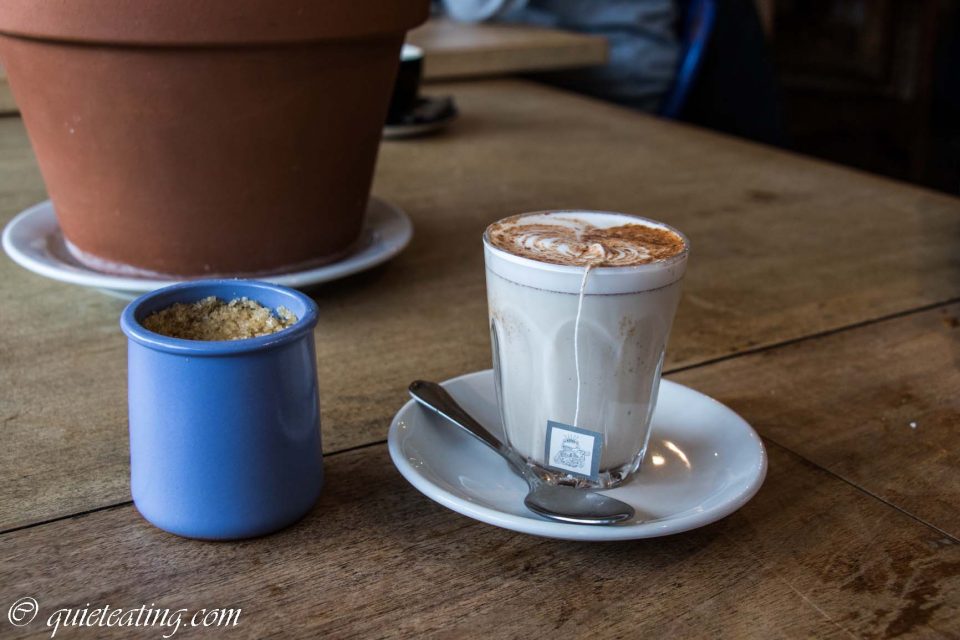 Chai latte.  Looks great.  Tastes of nothing.  As I should have guessed, this was rather bland and uninspired.  Although nicely presented, it seemed symptomatic of the cafe.  All looks but no form. 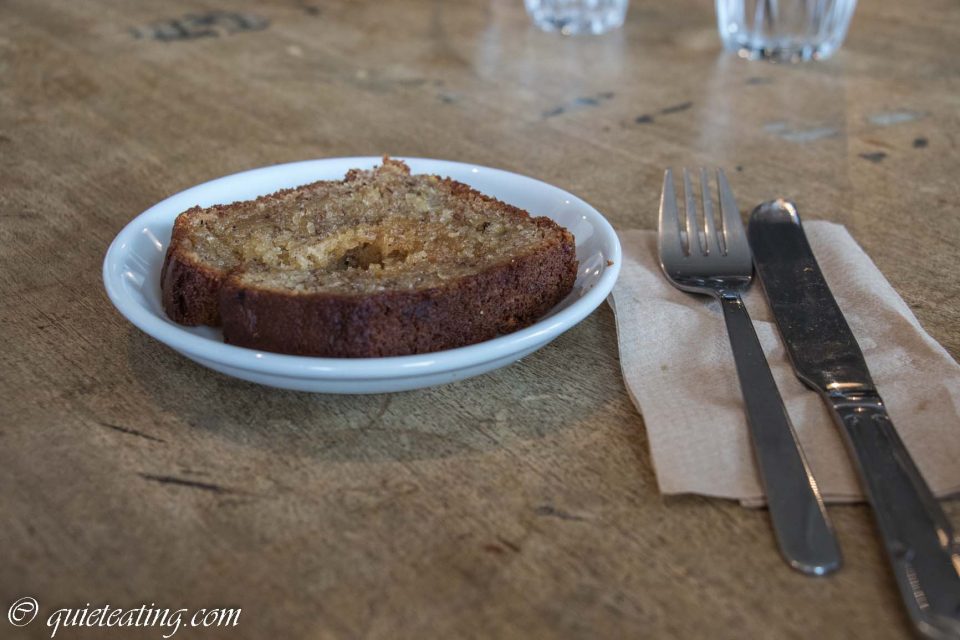 Banana bread.  With a hole in the middle.  Like someone got a bit hungry at the counter and took a bite when no one was watching.  Or they have a rodent issue (humanoid or literal).  It was ok, although drenched in butter.  The problem was that our eyes kept coming back to that hole.  We spent our cake eating time in perhaps paranoid speculation of what could have cause it.  Although we concluded that maybe it was an artsy, hipster-like signature: got to make the cake look a bit more rustic to please the masses of course.

With such a reception, I did wonder why the cafe had so many, correction, any, customers.  If the service was seamless, or even somewhat non-committal, I guess you could go here if you were desperate to get out of the house.  Unfortunately, describing the service as non-committal would be too kind.  In keeping with the cactus, it was rather prickly.  Hipster with enmity and rudeness.  HER is a pretty accurate name then.

Tea (a coffee and cake) was GBP7 including pretentiousness.