Life by contrast is a wonderful thing.

If we didn’t have things to compare things to, life would instead resolve into an unending joyless, dreary, mundane trudge.  Or so that is what I tell myself every time I have a bad meal.  It just serves to add to the spice of life.  However, just don’t say that to my face when I am digesting something rather foul.  Otherwise I might end up writing something less than complimentary about you.  So instead, what I think when something bad happens to me is that it adds an occasion to use as comparison later on – to make my sad moments just that little bit better.

Just this particular dinner, I spent the night in worry.  On account of the half cooked burger I had eaten at a chain restaurant.  I guess it serves me right for not being so picky.  Yet though I ordered my patty medium, it seemed rather closer to blue.  Although in my wretched, famished hunger, I took a large chunk out of the burger and immediately swallowed before the lack of preparation could be ascertained.  It was only then when it was too late, as the less than well cooked beef began its travel down my esophagus, that I realised the pinkness disguised between charred top and bottom.

Belatedly realising my mistake I endured the rest of the night reliving the event constantly.  This was a particular problem as the very next day I was booked into that most rare of opportunities, a seat at Sushi Tetsu.  Featuring a rather difficult and complicated booking schedule (check out their website if you want a flavour), the thought of possibly missing this almost unattainable occasion had me quaking in terror.  Thankfully, such horrors failed to materialized as I arrived hale and healthy.  I would (at least this time) not be wasting my chance. 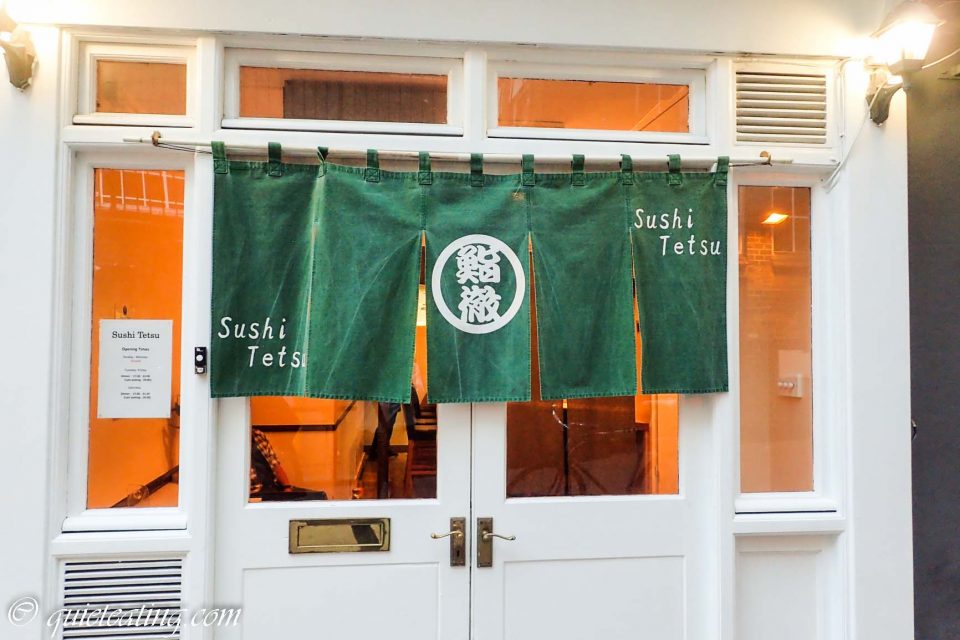 The front door.  This was a long time coming. 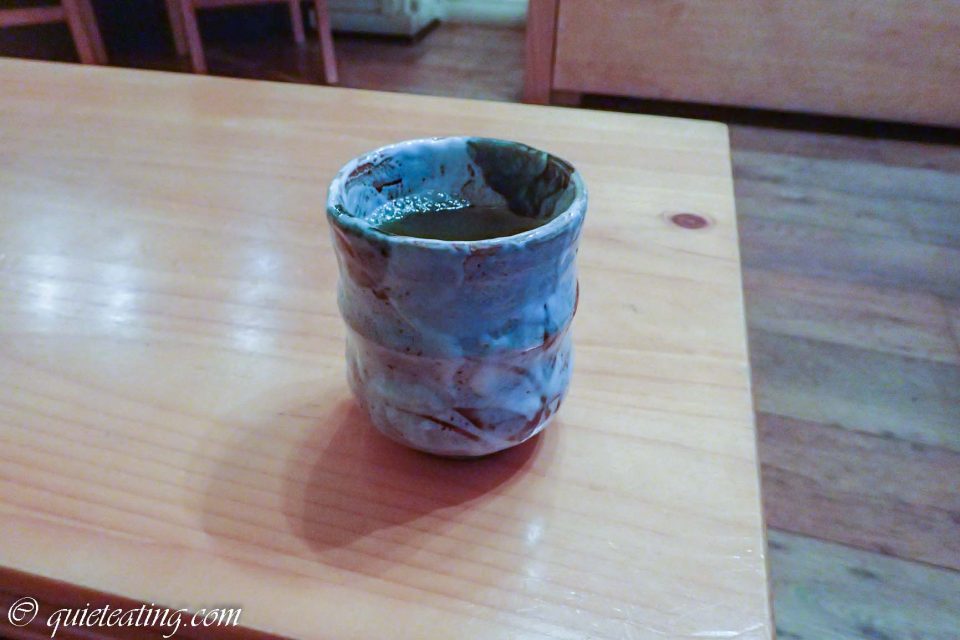 Green tea.  Its clean, uplifting and neutral flavour was to prove a particular boon.  Normally, I like things to be full of taste but in this case it was perfect not to detract from the sushi. 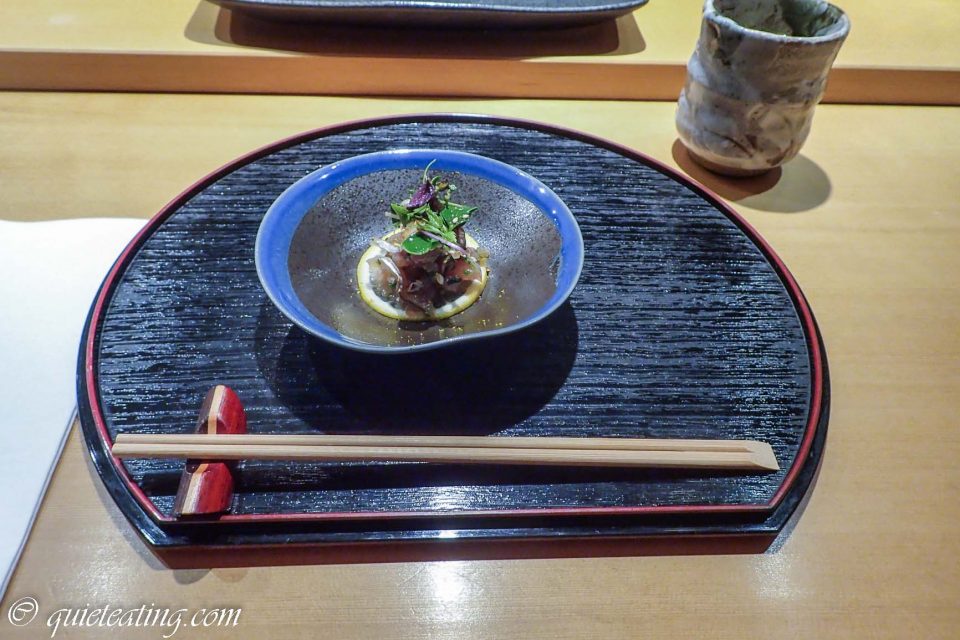 Horse mackerel (aji).  Deliciously smooth and meaty.  It tasted so fresh that I expected it to reconstitute into an angry fish and bite me.  Yet I should put such violent thoughts aside, even if they are somewhat in vogue these days with North Korea brandishing its various weapons to the world. 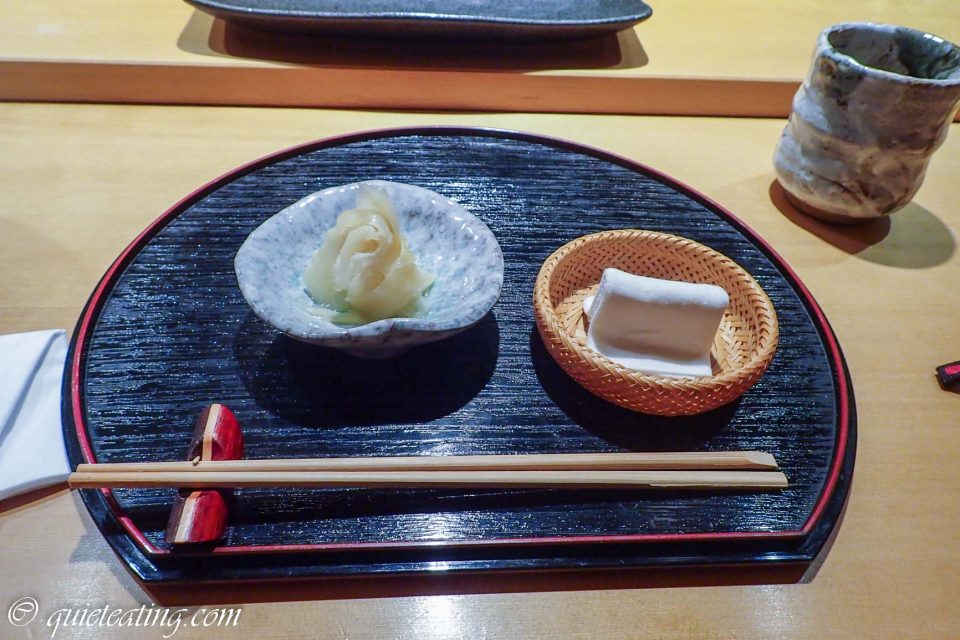 Ginger to clean the palate in between sushi.  A towel to dab your fingers as you eat.  You see, only barbarians eat with chopsticks.  True culture is eating sushi with your hand.  All in one bite, the way it was meant to be.  There is no need for soya sauce or wasabi.  Such uncouth activities of dipping and swiping with unskilled chopsticks are done away with.  Instead the chef expertly adds just the right amount for you by way of delicate soya sauce brush and wasabi root grinder.

Yellow tail (hamamachi).  Delightfully light and sadly gone in a flash.  With delicate bite from the wasabi.  Here it might be helpful if I elaborated slightly.  Wasabi is from a root.  It is relatively rare to eat the real deal as most of the wasabi in the world, is fake, much like politicians of this day and age.  The fake stuff is made from horseradish and dyed green.  The pain and watering of eyes is from having a pale imitation of the real thing.  You could say that the suffering may just be me getting my just deserts. 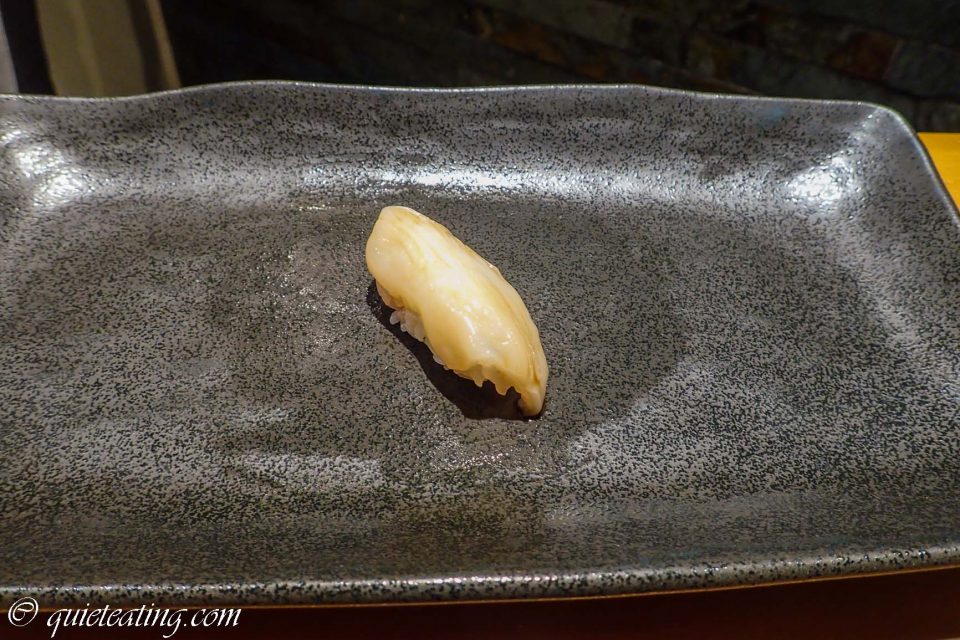 Sea bream (tai).  With a different excellent flavour.  A clean taste all the more to contrast with the various pieces of tuna to come. 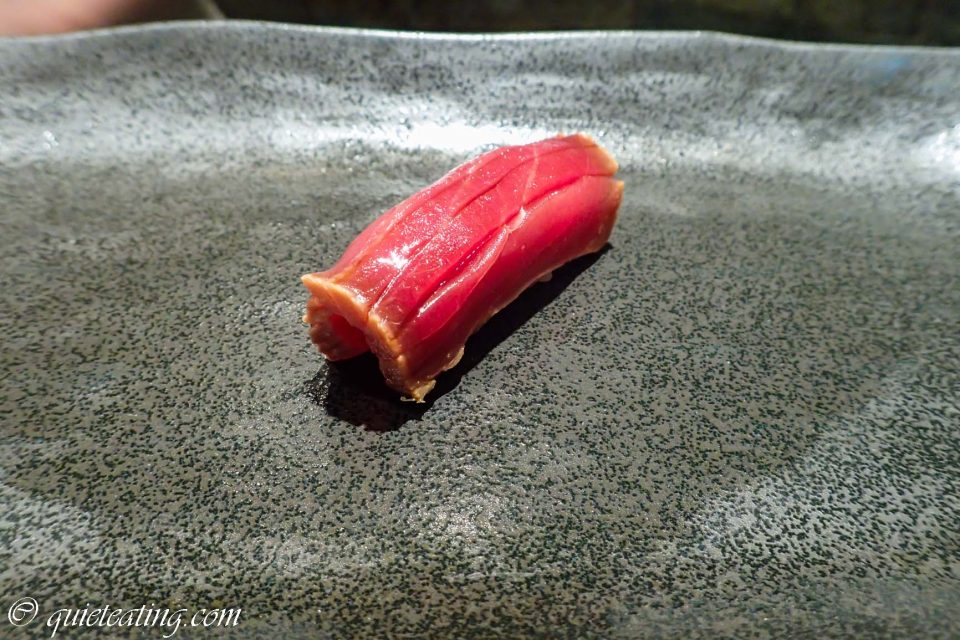 Tuna (maguro).  Normal tuna.  The rich red mesmerized me.  The taste even more so.  So meaty and almost unbelievably rich and smooth.  So much so that it almost tasted like some type of land based muscle. 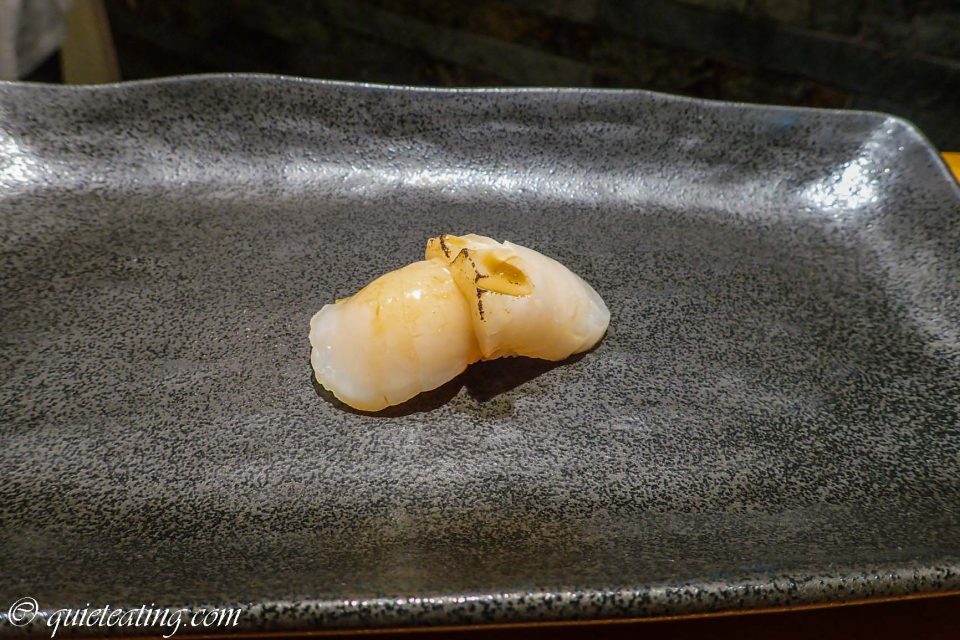 Scallop (hotate).  This brought me back to days of Japan gone by.  With lovely smooth and silky taste combined with the delicate rice.  The rice is of the highest grade and skillfully molded by the sensei to be the perfect accomplishment to the fish.  A joy to behold and even more so to taste. 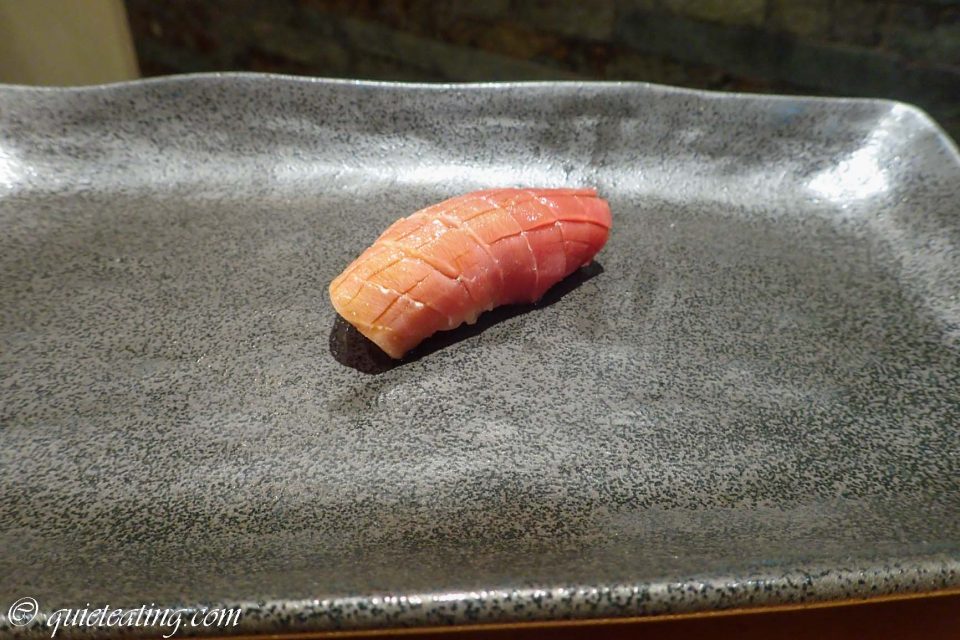 Medium fatty tuna (chutoro).  Building up the tension, the master next gave us a tantalizing piece of medium fatty tuna.  With one side more fatty than the other, it was an ideal bridge pacing the meal. 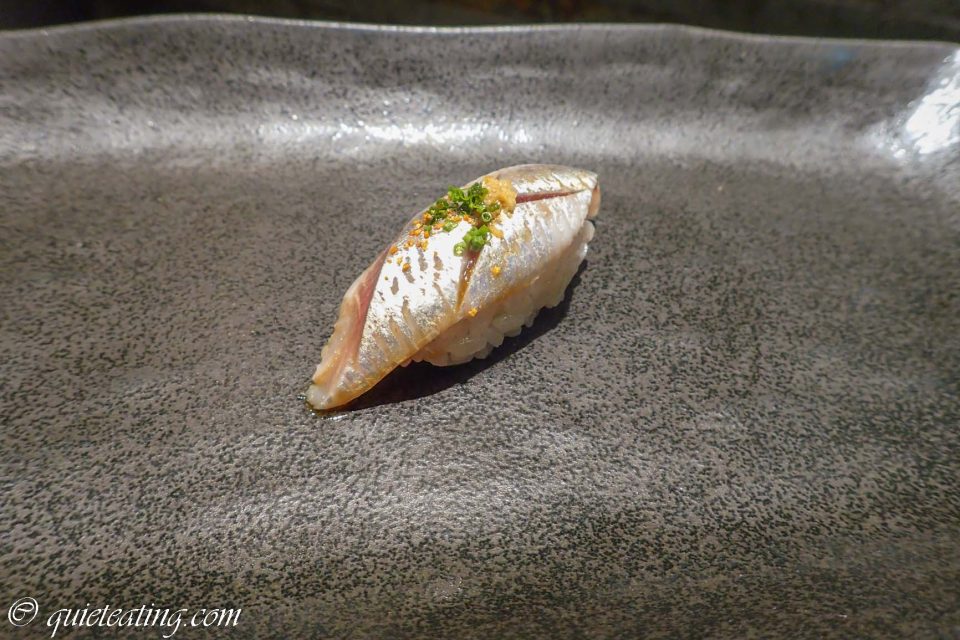 Sardine (iwashi).  The next movement of the dinner was a fish with a lighter taste than the tuna.  With delicate seeds and spring onion, this was breathtakingly paced to prepare me for a thoroughly different texture. 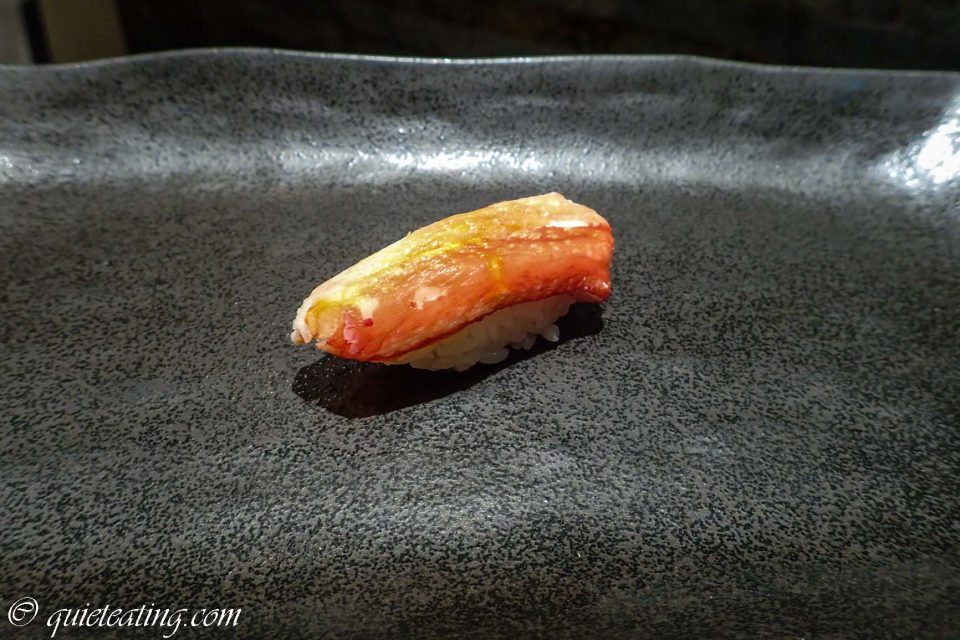 Snow crab (zuwagani).  Flaky flesh with a creamy taste.  This reminded me of my days in the tower of crab.  Succulent meat on top of stellar rice. 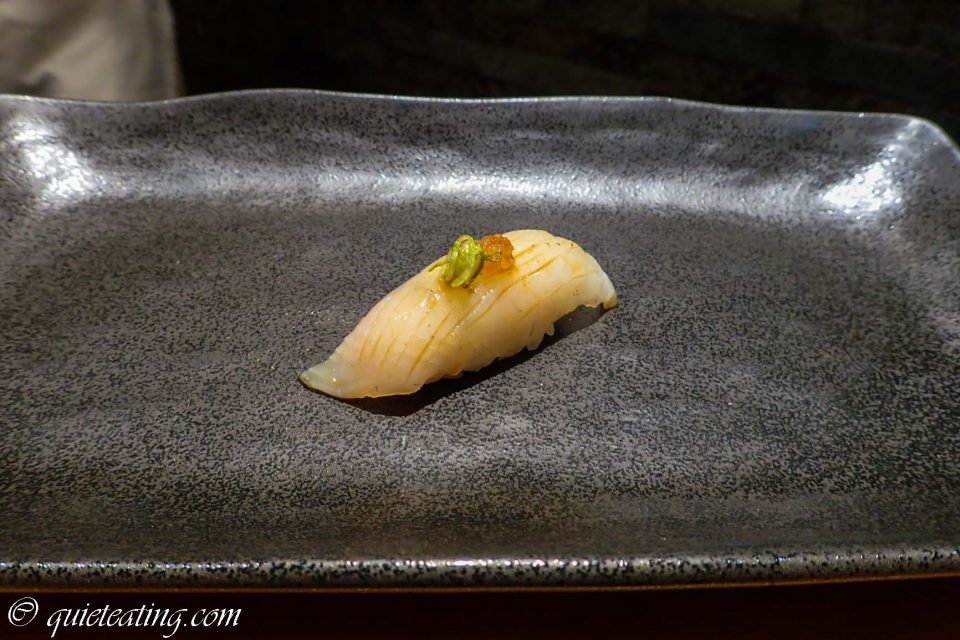 Turbot (mako).  The most springy of the dishes, deliciously chewy contrasting with the crumbling depth of flavour of the crab. 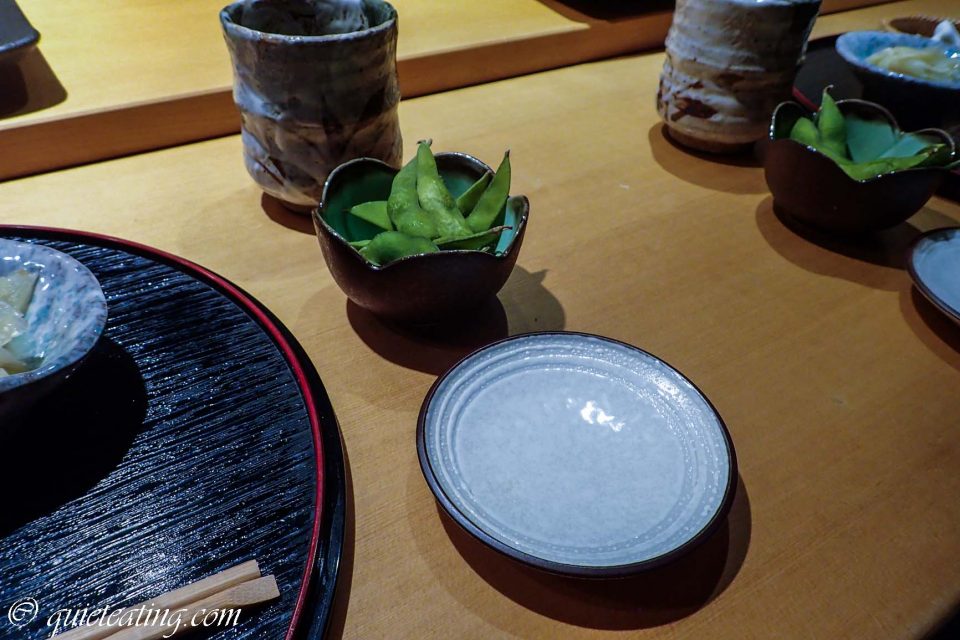 Edamame.  Some beans to provide a break.  Again another example of expect pacing of the meal.  These were carefully prepared before the heady tastes to come. 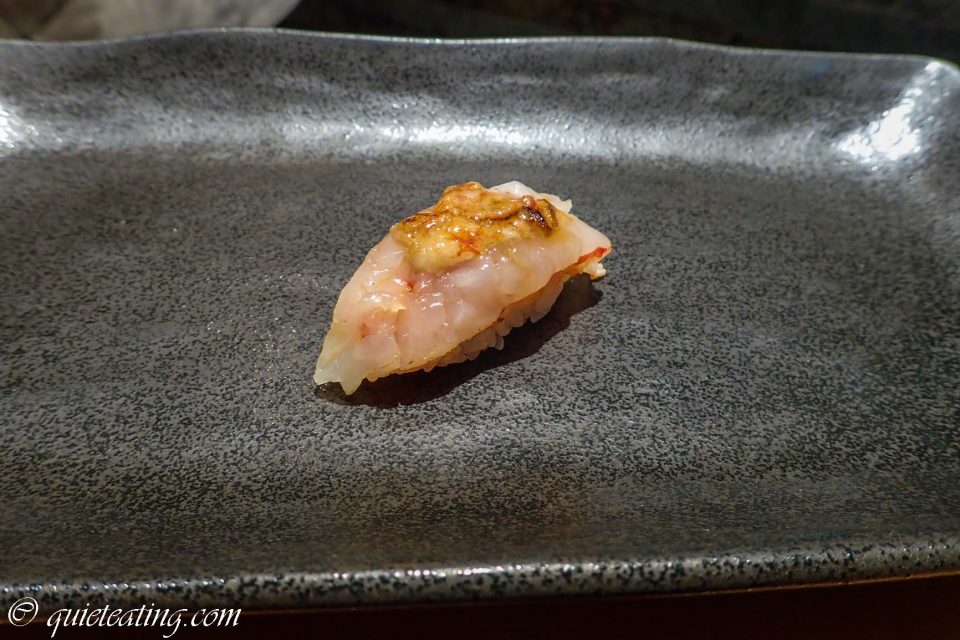 Prawn (ebi).  With miso on top.  Miso – means brains.  When this went in my mouth, I was struck by a thought.  Apt – giving that I was digesting prawn brain.  That this was singularly the best prawn I have ever eaten.  So good in fact that words (almost) fail me.  It was just that indescribably good.  Silky, meaty, umami, all in one.  Something to die for. 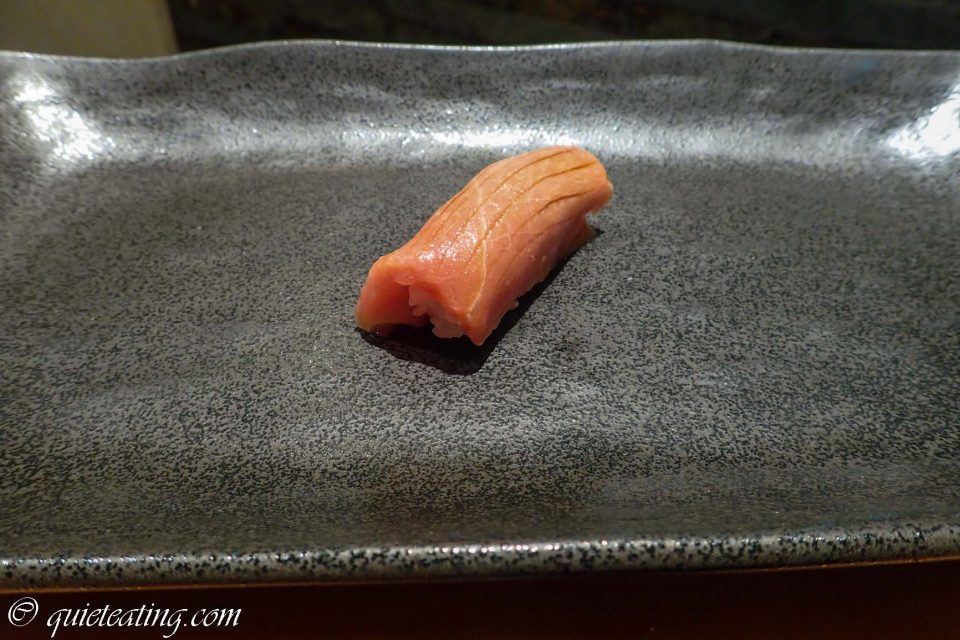 Fattest tuna (otoro).  Following up from the superlative prawn event, the most expensive cut of them all.  Fattest tuna.  I had thought that there was nothing that could outdo the prawn.  Yet, here it was, a slice of heaven.  So delicately marbled with fat, so delicate in taste, so ethereally light, so meaty in texture.  I could think of almost nothing better. 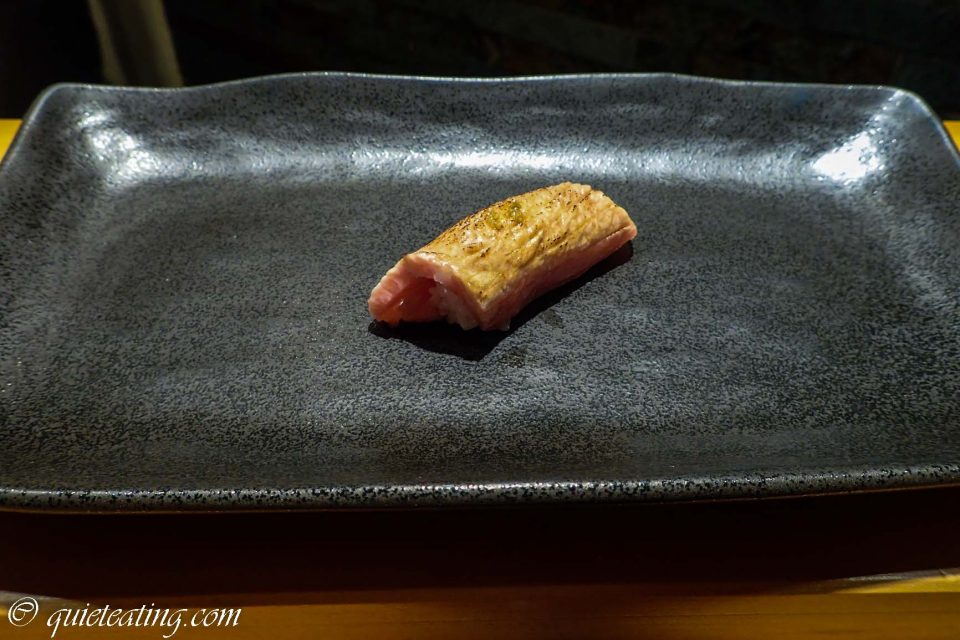 Seared fatty tuna (aburi otoro).  Yet the concert did not stop there.  So in another show of what can be done.  Here is seared heaven, torched just right.  Another eye opener. 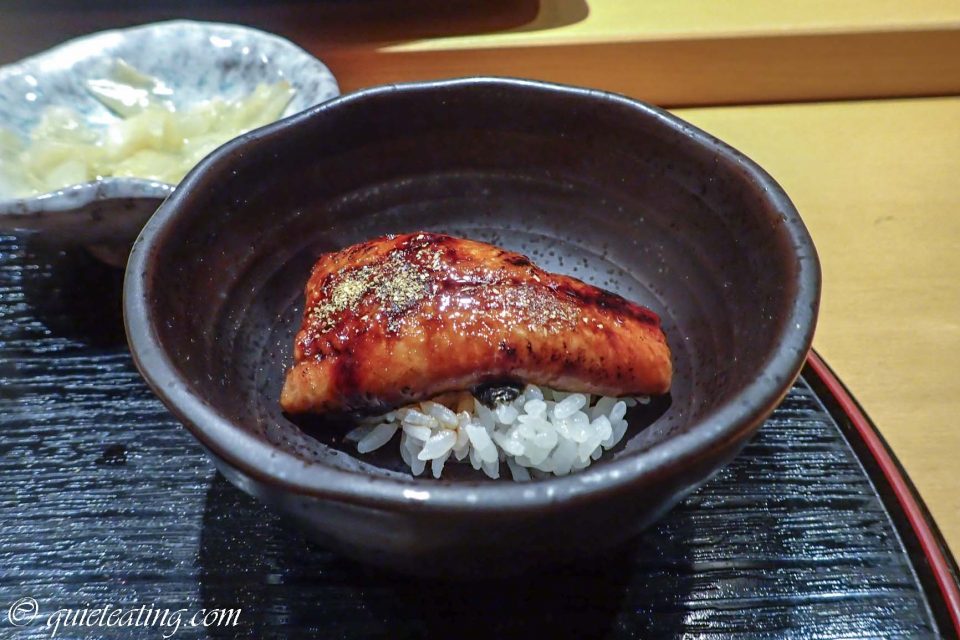 Eel (unagi).  As I was recovering from the transcendent raw foods, along came a cooked event.  Soft, flaky and with intense flavour, nestled on a bed of rice.  It was almost indescribable and again brought me back to my memories of eels gone by. 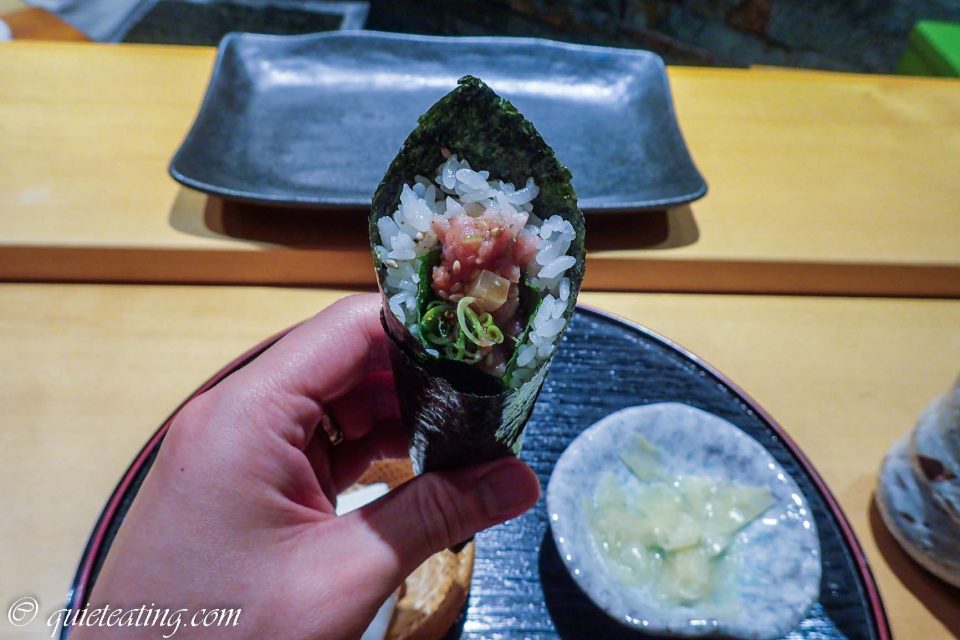 Minced tuna roll (negitoro temaki).  Extraordinary, with unparalleled keenness of flavour, it tasted like eating the very best tuna ever.  In comparison to the tuna that went before, the texture was different but good.  Fastidiously chopped by hand into an almost cream texture, it almost seemed like the icing on this cake of a meal. 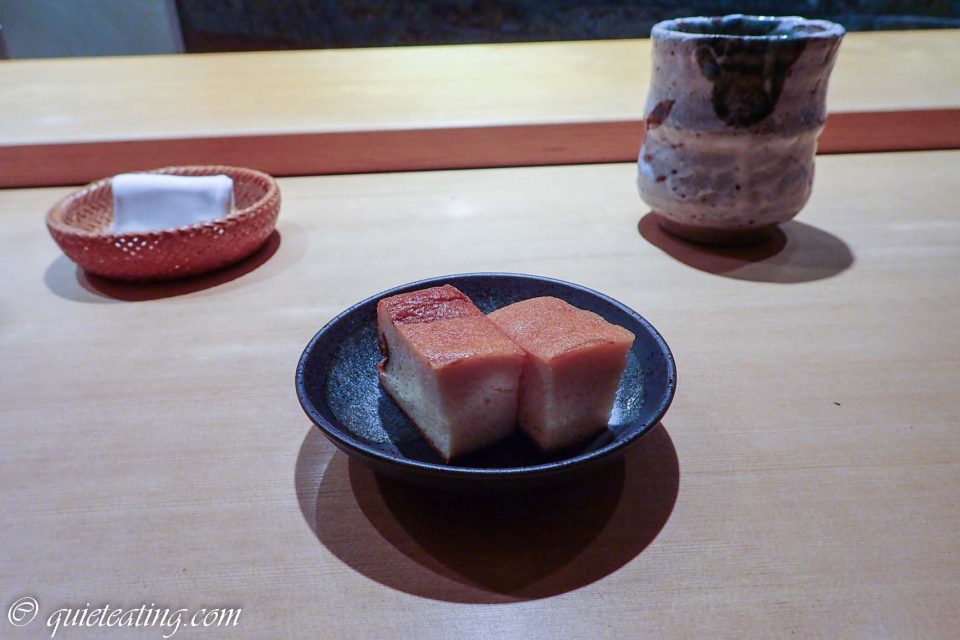 Omelet (tamagoyaki).  Sweet and savoury, it seemed like it couldn’t make up its mind.  Perhaps, the best way to let me down slowly from my trip to heaven on earth.  Gone fast, ahead of its time as it softly went down my throat.  Disappearing into the night gently, not with a whimper or bang but instead a musically orchestrated finale.  And then it was done.

At this tiny 7 seater in the City of London, only open for dinner, I did wonder what all the fuss was about.  Now I know, it is probably the best sushi restaurant in London.  This is where I learnt to reconnect with my inner seafood and understand that there really is good Japanese food in London.  And that is not irrational exuberance, or perhaps I should say in the speak of today’s world, not fake news.

Dinner (all of the above) was GBP96 excluding service and drinks.