There is a major problem with expectation and hope.  It brings along sometime weighty baggage and makes things harder to achieve.  For example, just look across the pond at attempts to “make America great again”.  I wish them all well but if it was me, the pressure would not be helpful.  Although, wilful blindness may be an essential asset in such case.  Lucky US.

In a much less exciting manner, this is how I arrived at the Clove Club, burdened with expectation.  I had even visited its little brother, Luca, just the night before to get in the mood.  That was a good meal setting up for a suitable encore.  The Clove Club is a particularly storied entrant to the London food scene, featuring in many of the world’s best food guides.  So no pressure there… 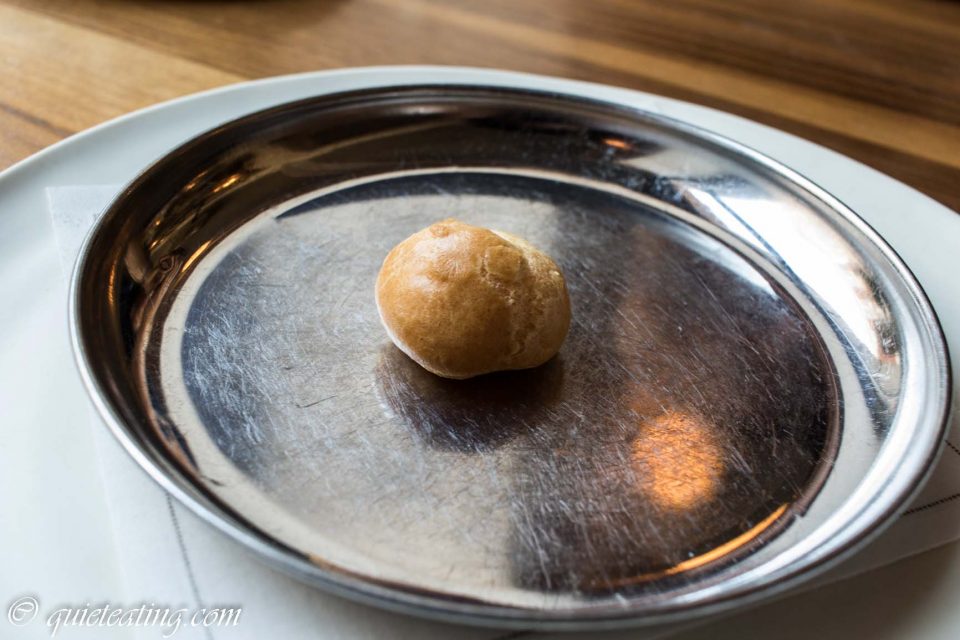 Ogleshield Gougére.  A lonely cheese puff to start.  I soon found out why it was alone.  It was so good that if it had siblings, I would have gobbled them all and spoilt my dinner.  Firm pastry, cheesy inside, savoury, soft and firm all together.  Something to build expectations for the future. 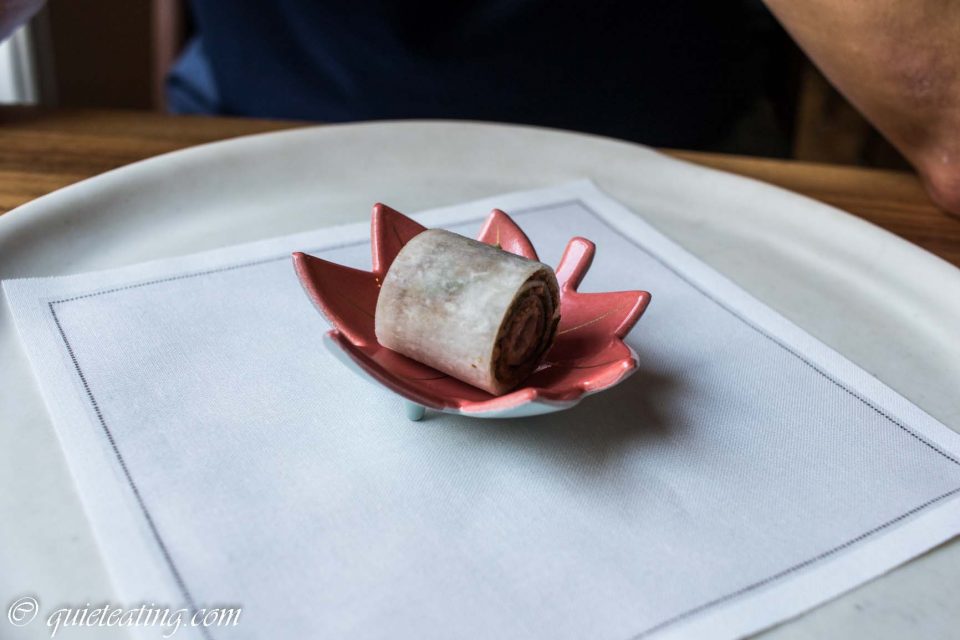 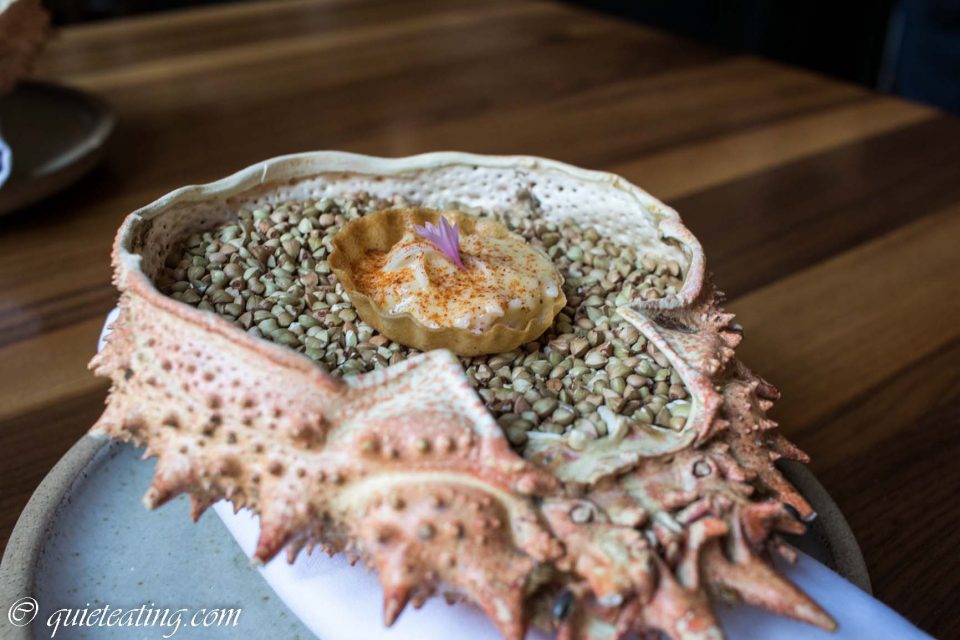 Brown Crab Tart & Devilled Spices.  Mounted on this particularly sharp shell, there could be no mistaking this for pieces of crustacean.  Full and creamy with delightful spice, something to have again if I returned. 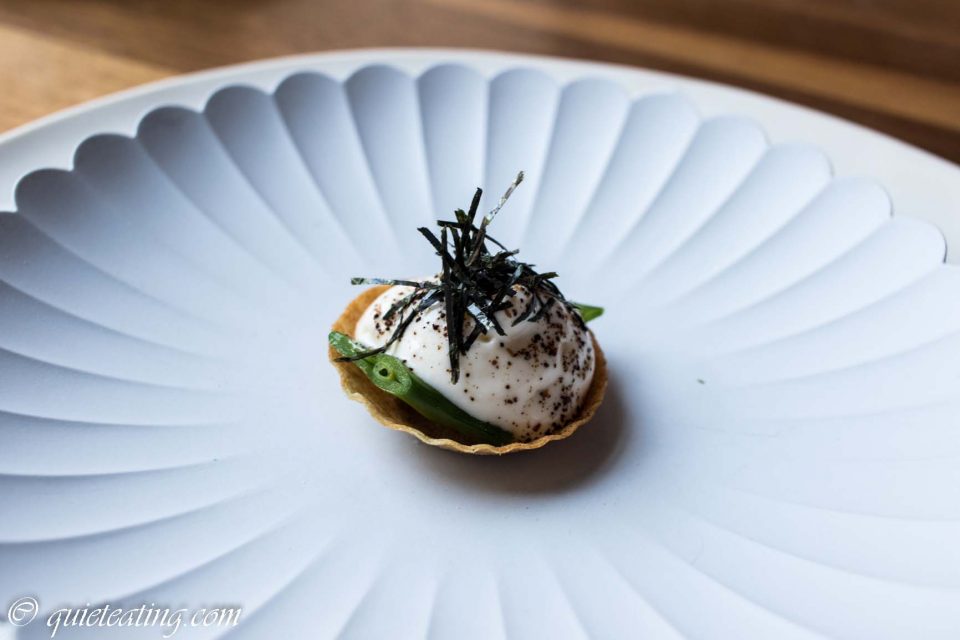 Green Bean, Ewe’s Milk & Hazelnut Tart.  A demonstration of why you can be vegetarian and still love food.  Delightful cream, crispy clean bean, it all went well together. 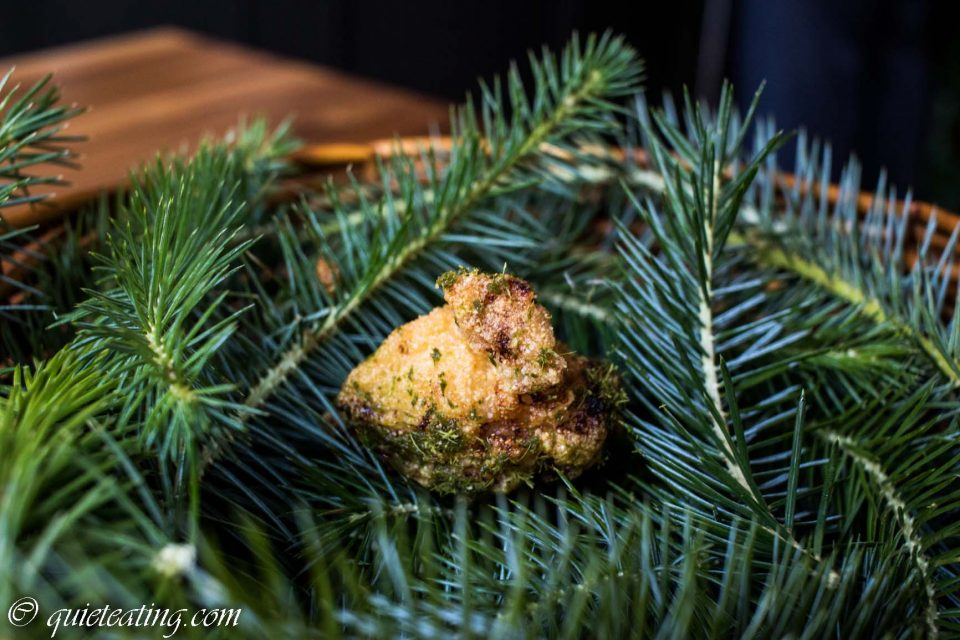 Buttermilk Fried Chicken & Pine Salt.  Yet it was the last amuse bouche which will forever have a place in my heart.  You would think that with my obsession with things cooked with copious amounts of oil, I would have found deep fried nirvana by now.  This showed me although I had previously thought I had arrived, I was sadly mistaken.

This is what fried chicken dreams of being.

With the amuse bouches done, it was on to the real food. 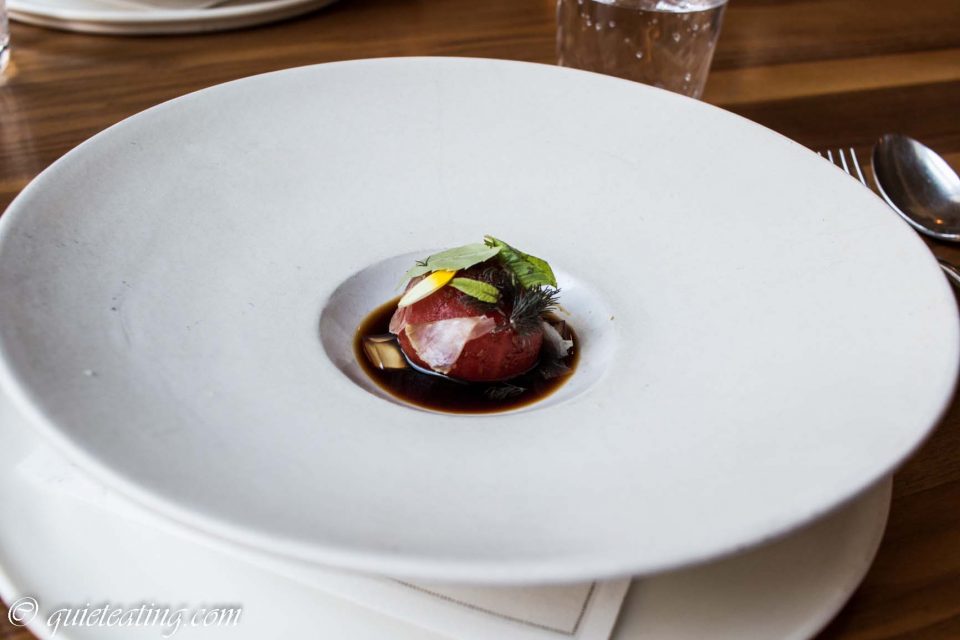 Warm Penjar Tomato, Ginger Dressing, Ham & Aromatic Herbs.  Light and interesting.  The tomato itself was intensively flavourful, worlds apart from the salad tomatoes that I have usually tried. 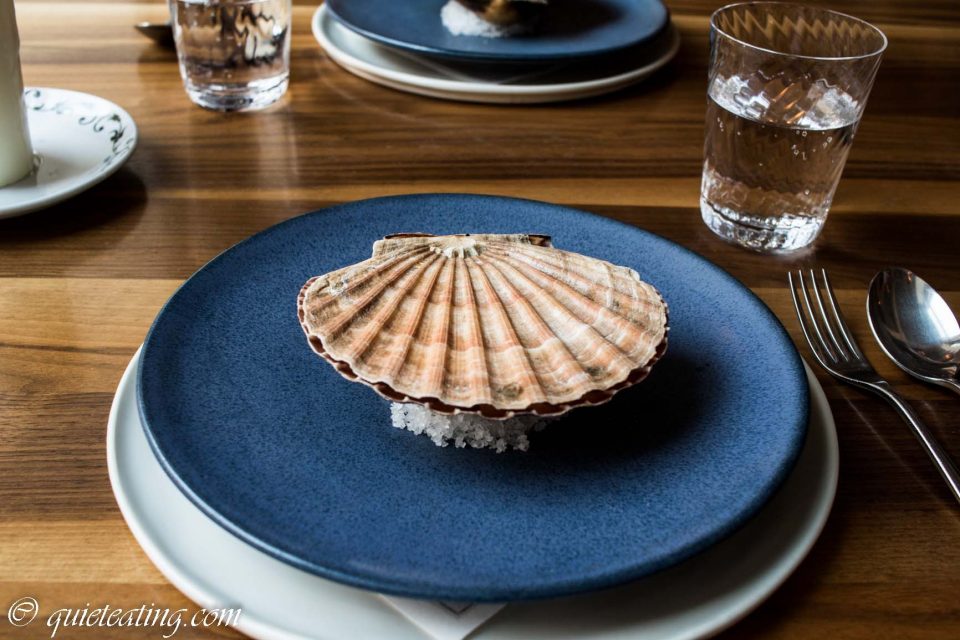 Theatrics is half the game.  Well, that’s what they say in show biz.  That’s kind of what I felt like the Clove Club was at times. 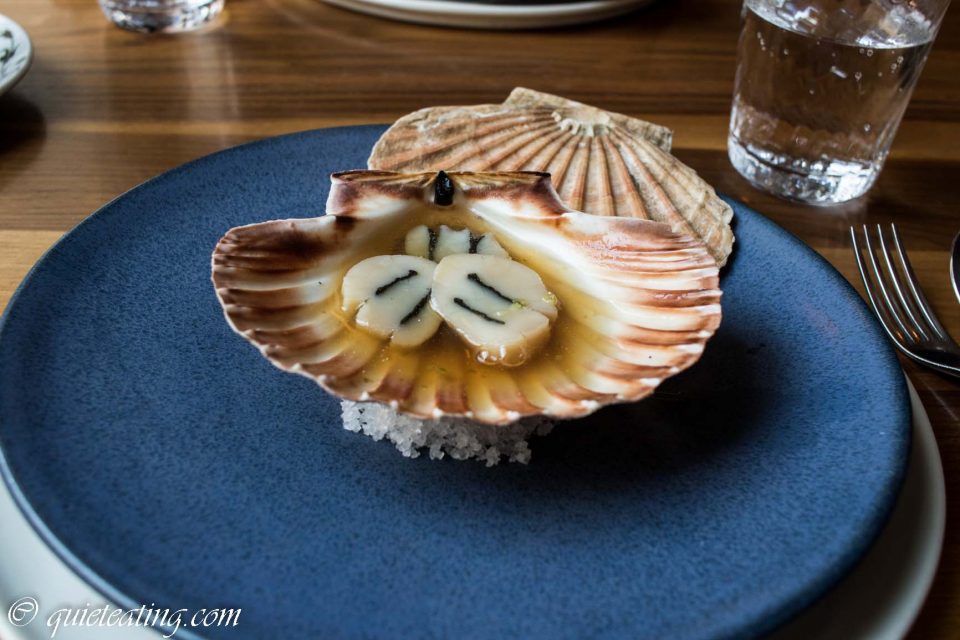 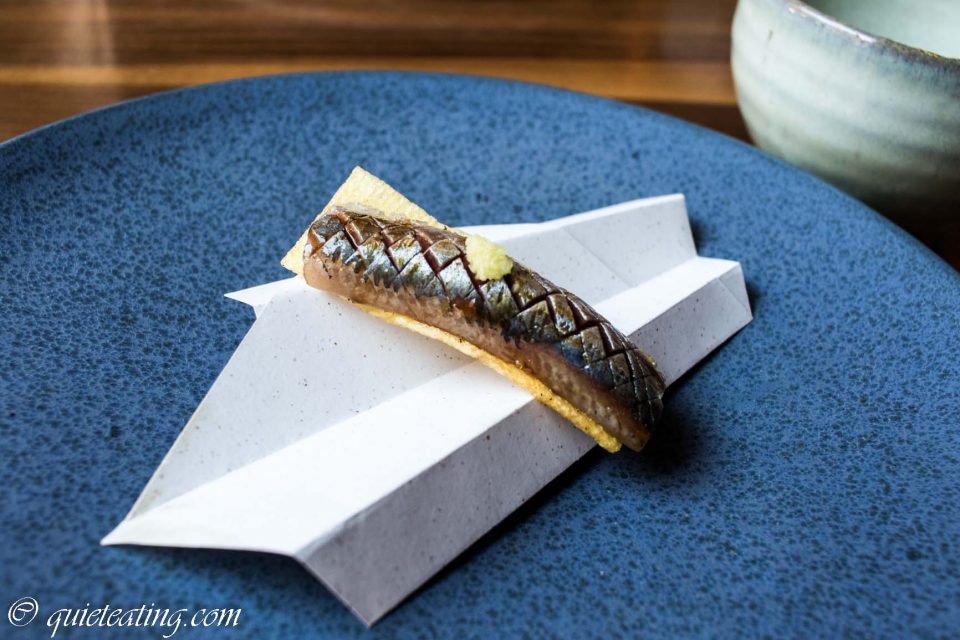 Cornish Sardine Sashimi.  This was a surprise.  It has been a while since I have had such decadently delicious fish.  This sardine sashimi is up there with some of the best sashimi I have had.  A hint of minced ginger, a crispy cracker base and delicately lacerated flesh.  Sublime. 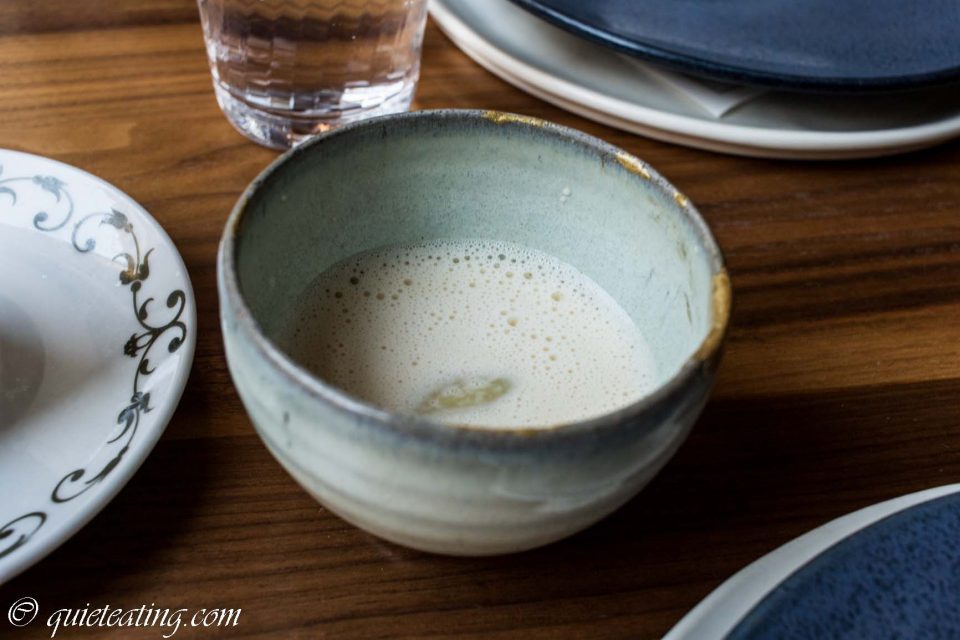 Worcestershire, Smoked Sardine & Whisky Broth.  The sardine came with something else sublime.  Creamy, light and meaty soup, I could have easily drowned myself in this if there was more. 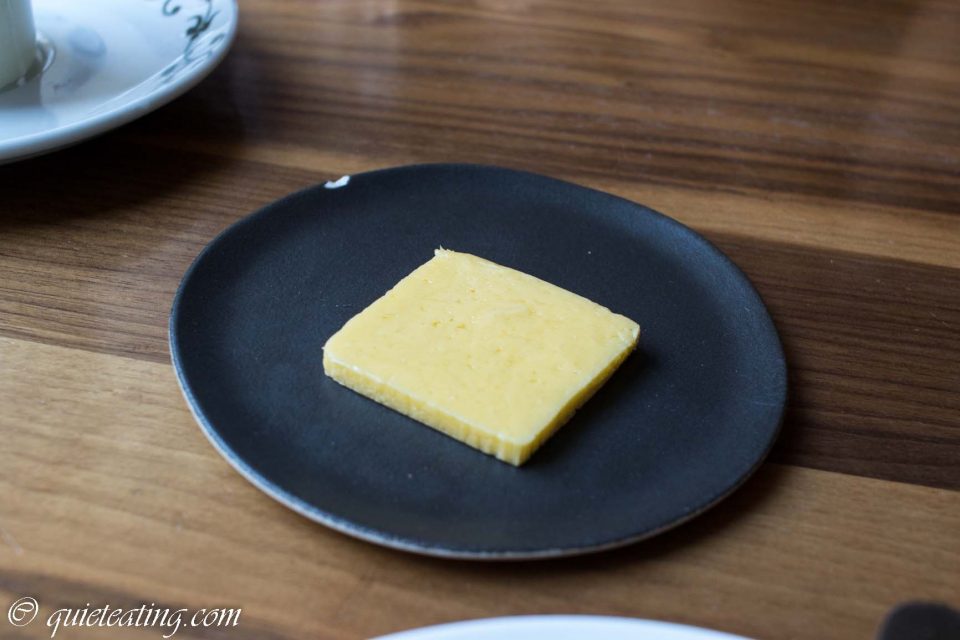 Butter on a chipped plate.  Perhaps this was a sign.  A chip off a otherwise rather beautiful place.  A harbinger that things were not as they seemed. 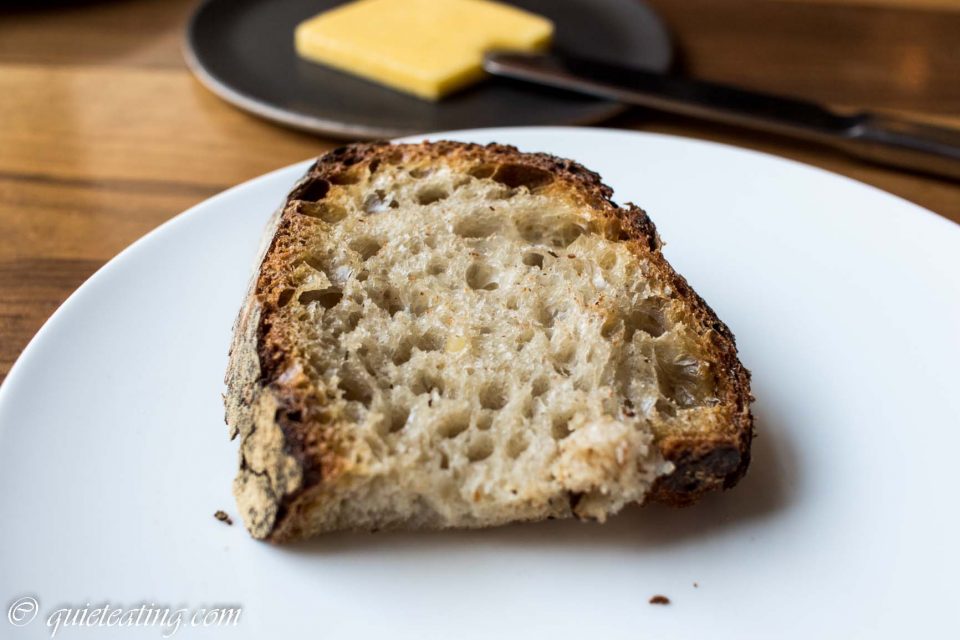 Bread.  Ok but not awe inspiring.  It tasted a little too bitter for me, like it had been slightly too long in the oven.  Yet perhaps I am being picky as usual and instead this is just bread done differently. 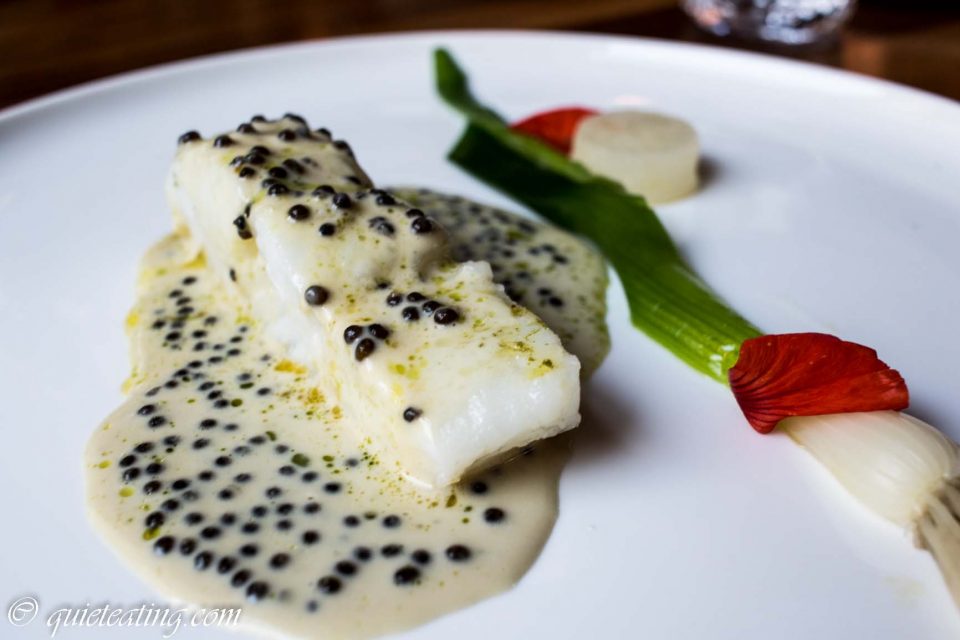 Cornish Turbot, Garden Vegetables, Oyster & Caviar Sauce.  If there was a rich man’s dish, this is probably close to the stereotype.  If it was foie gras loaded with caviar, the expenses would be even greater.  The fish was delicate and cooked just right, the cream and caviar heightened the taste of the fish and the leek provided an earthy counterpoint.  Delightful. 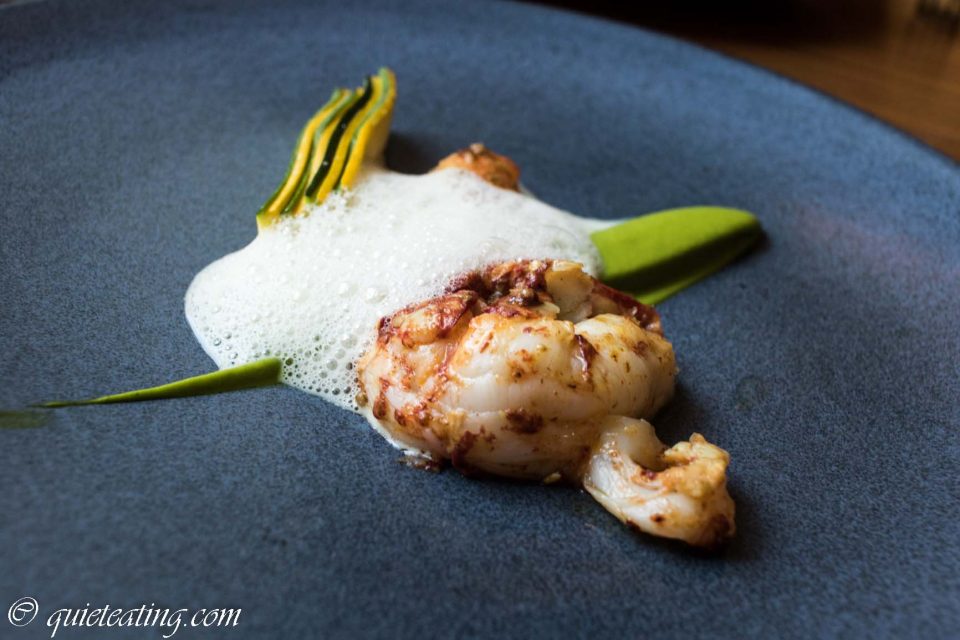 Native Lobster cooked to order, Courgette & Indian Spices.  Not bad although not particularly inspiring in this day of age of cheap lobster for the masses.  Translation – it was good but nothing mind-blowing. 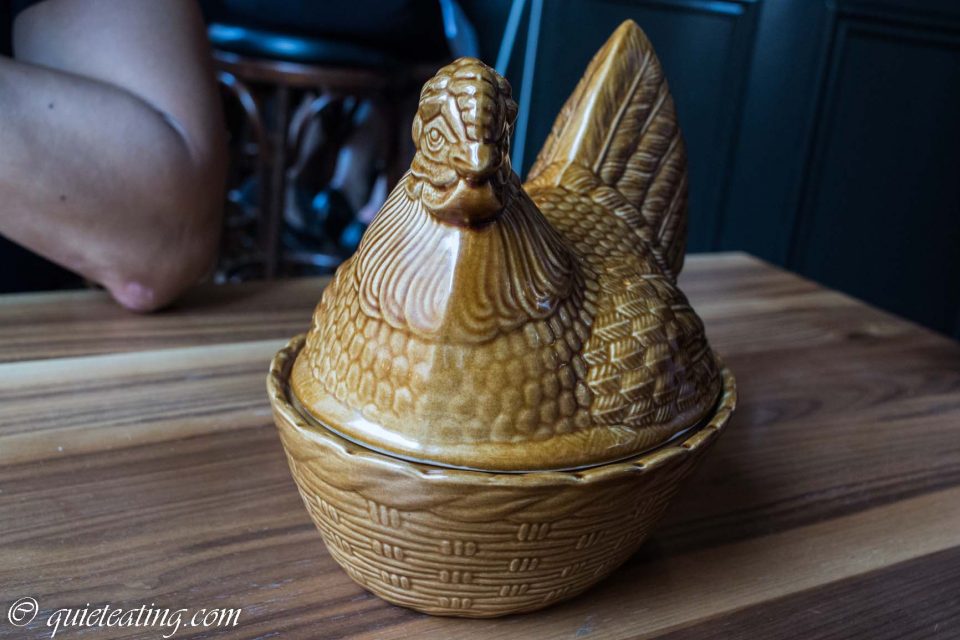 A baleful gaze.  This is what I felt like doing once the meat courses started. 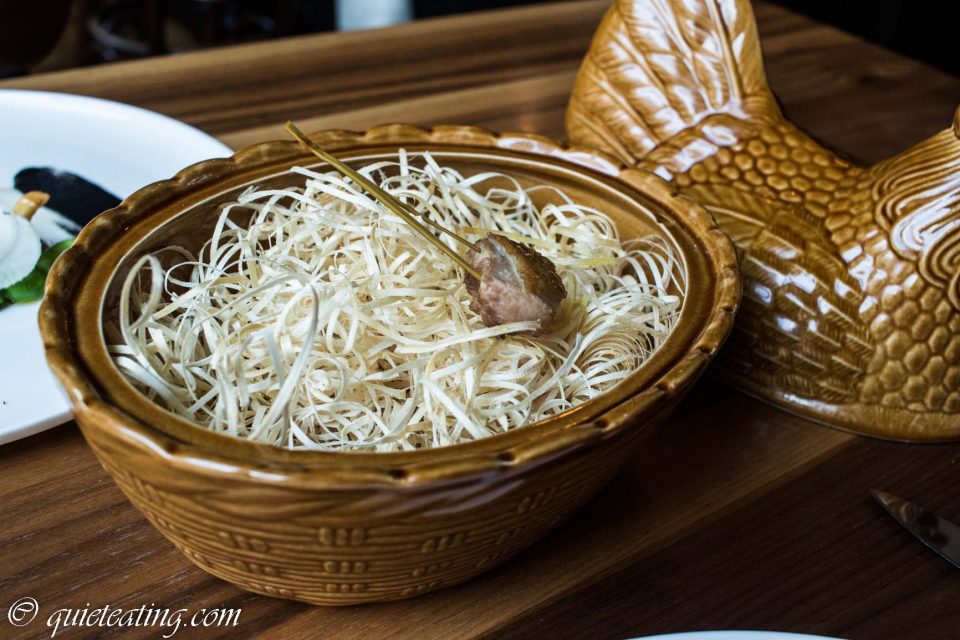 Thigh.  Not bad, although a little small.  My hopes had been built up as they left Mr Chicken on my table with explicit instructions not to peek inside.  I dreamed that there was real treasures inside.  Instead, there was just this skewer.  Kind of anticlimactic.  It was ok but nothing amazing. 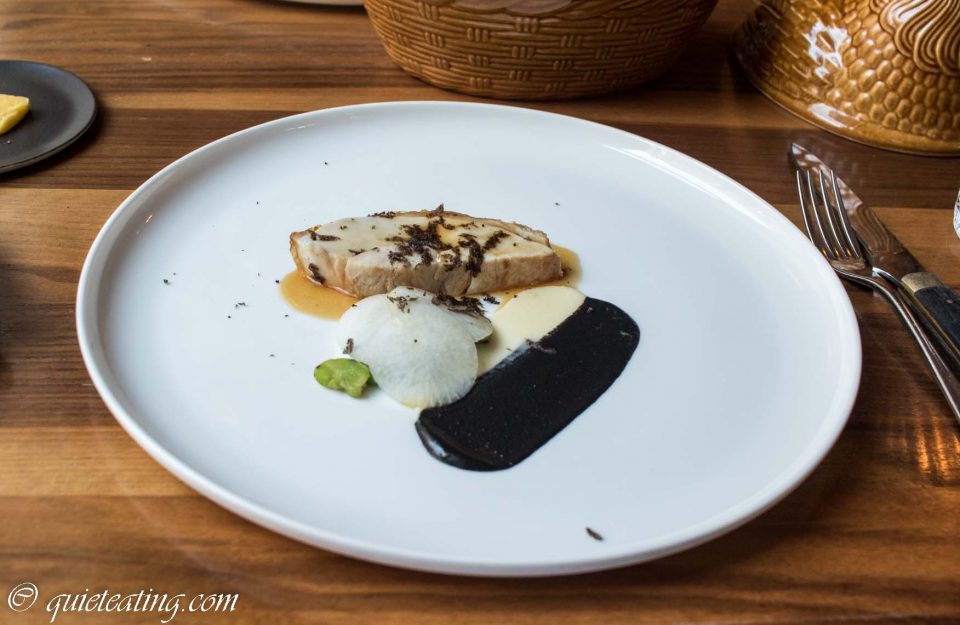 Slow Roast Lincolnshire Chicken breast, Manjimup Truffle, Broad Beans & Girolles.  Sadly underwhelming.  Lacking depth of flavour, it just didn’t do it for me.  The truffle was good but not enough to lift up the plain breast. 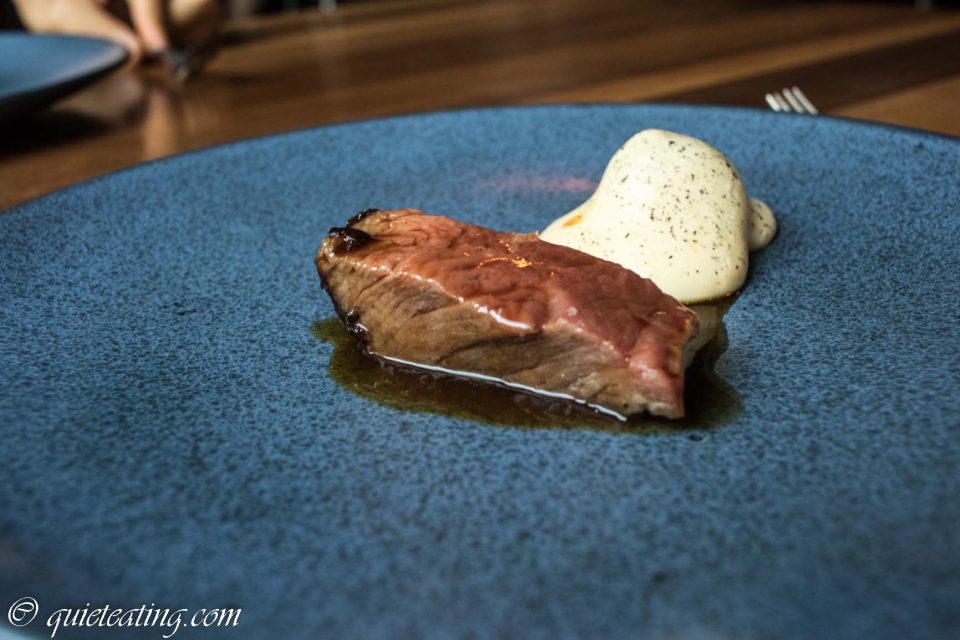 Sirloin of Aberdeen Angus Beef, Jersey Royal & Hay Hollandaise.  Suffered from the same issue as the chicken above.  Yet, perhaps it is because I have been spoilt by beef of a Japanese kind.  This English breed just seemed rather insipid as it didn’t taste of that much.  It was, strangely enough, the hollandaise that was the star here. 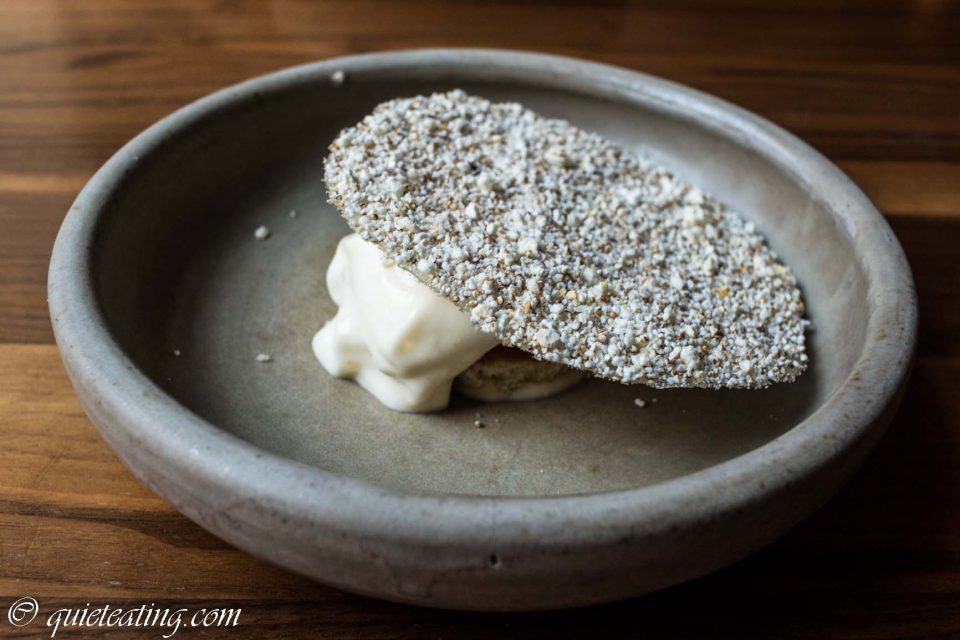 Loquat Sorbet, Loquat Kernel Cream & Puffed Amaranth.  As I broke the Amaranth, I was treated to a show of small balls bouncing up and down as I methodically broke the disc.  With such a show I had high hopes.  I was to find that the taste was pleasant if not particularly awe inspiring. 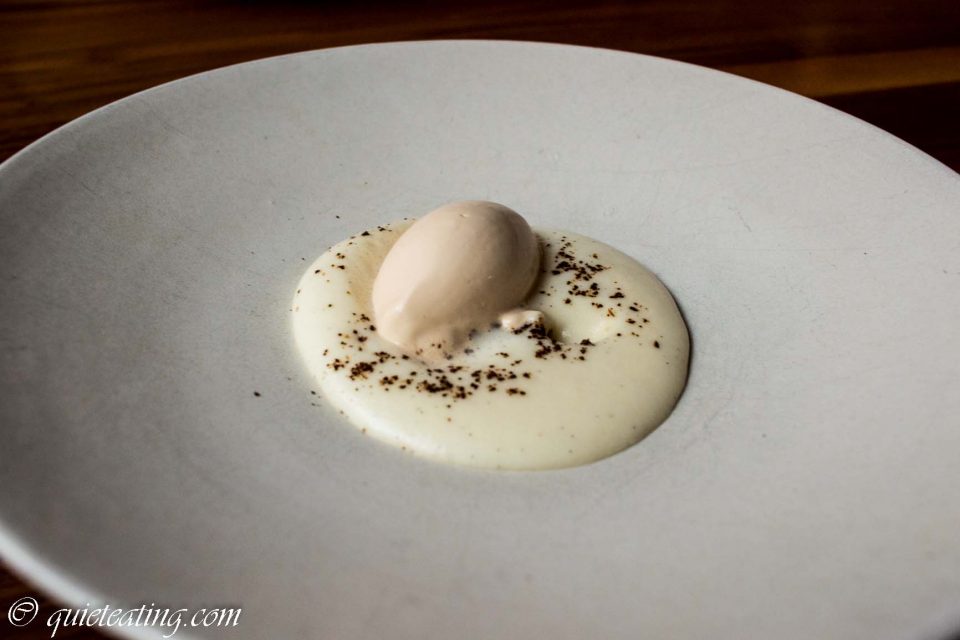 Warm Potato Mousse, Coffee & Caramel Ice Cream.  This was probably the most weird dish of the day.  Ice cream with potato mouse set off question marks all over my head.  A strange event.  Not unpleasant but just strange. 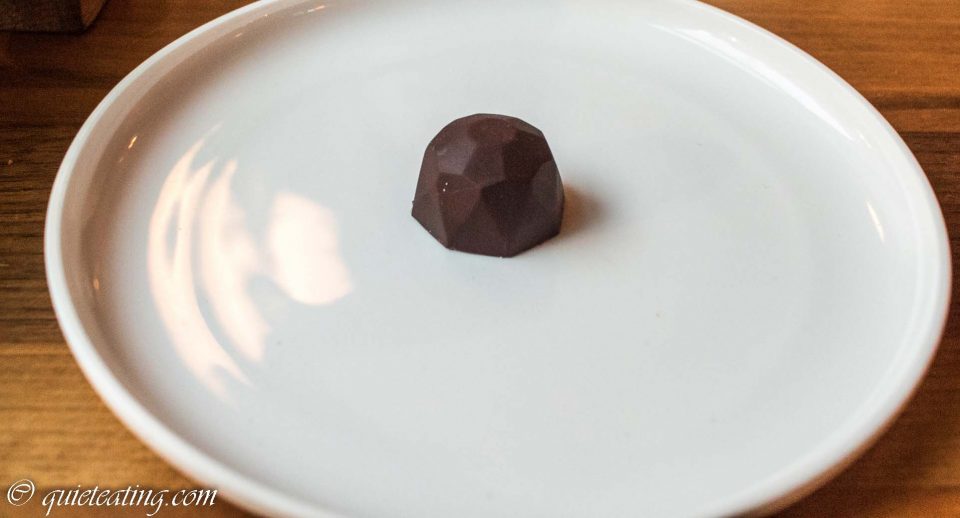 Homemade Chocolate.  Nothing to write home about as it was rather ordinary. 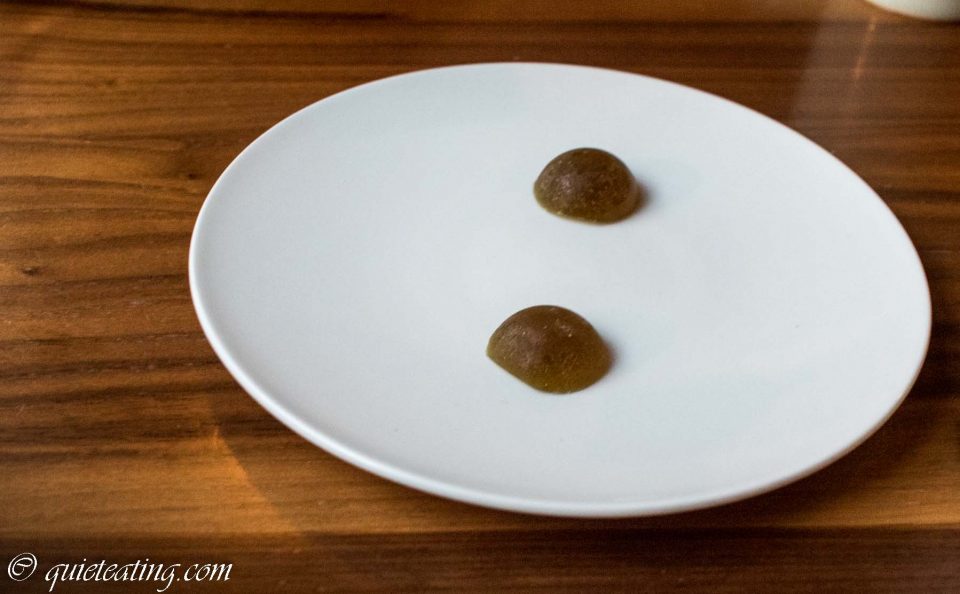 Dr Henderson’s Bon Bon.  I can’t really judge these as I haven’t had many before.  I guess it was ok. 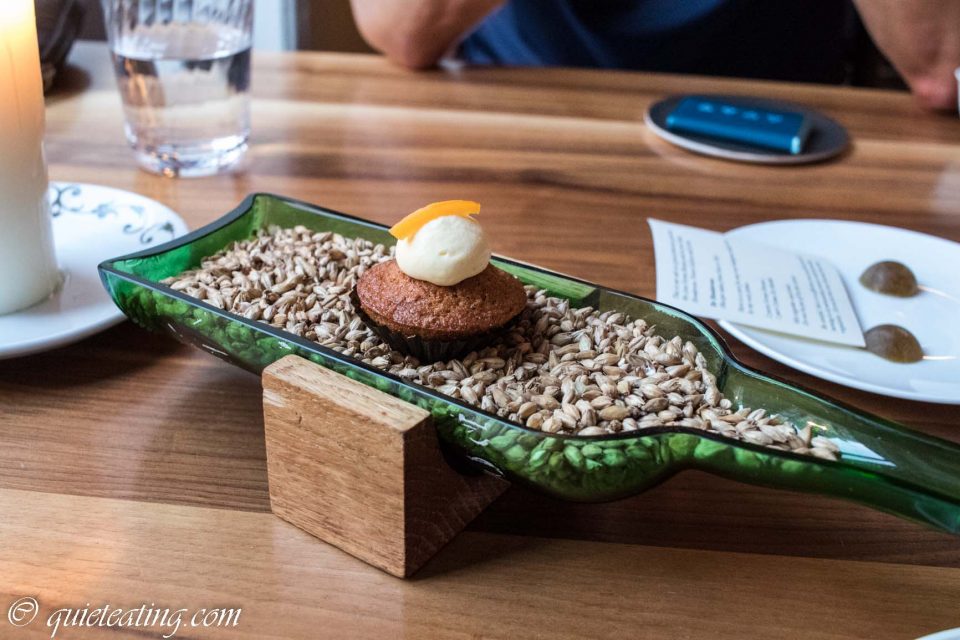 Peated Barley Cake & Dundee Marmalade Cream.  This though I will mention.  Delightfully sweet (but not too sweet) with barley and orange hints, this was inspired.  A delicious end.

Like many things in my life, things started off so well.  Unfortunately, as time went on, perhaps understandably, the restaurant staff seemed to begin to lose interest in me as the pace of the meal tended to tail off.  That is somewhat excusable as sometimes I get bored by myself too.  As the service seemed to abate, so too did the delight of the food.  It held so much promise at the start but devolved to something just good but not exceptional.  As I say of some of my friends, they started off so well but in the end, things kind of fell apart.

As I left at the end of 4 hours, I thought it would just have been nice if it hadn’t been so expensive a lesson to learn.  Yet, as they say, you live and learn.

Dinner (all of the above) was GBP130 excluding drinks and service.