At least they have an accurate name.

As you might have deduced, they serve buns.  These are not the version that you might think would be found in the west but instead fluffy steamed Taiwanese versions.  As compared to Bao, which managed to so artfully capture the cool and trendy element of such buns and accordingly triple the price, Bun House instead appeals to those with smaller pockets.  It is, to use the buzz word of the cool crew, authentic.  In the way that I experienced when I was in the Far East, food takes the centre here.  Service is disregarded in pursuit of taste as there is no table service.

This leads to an interesting arrangement if you want to eat.  As you need to listen for the screams that your order is ready and then quickly appear before the server runs out of patience.  In a similar vein, the dining room contains no frills with tiny table and stools, industrial steamers on prominent display and easily hosed down floor to more easily clean up spills.  It is all about the food.

Although aside from an unrelenting focus on how things think, it is Chinese in another way.  It is kind of cheap. 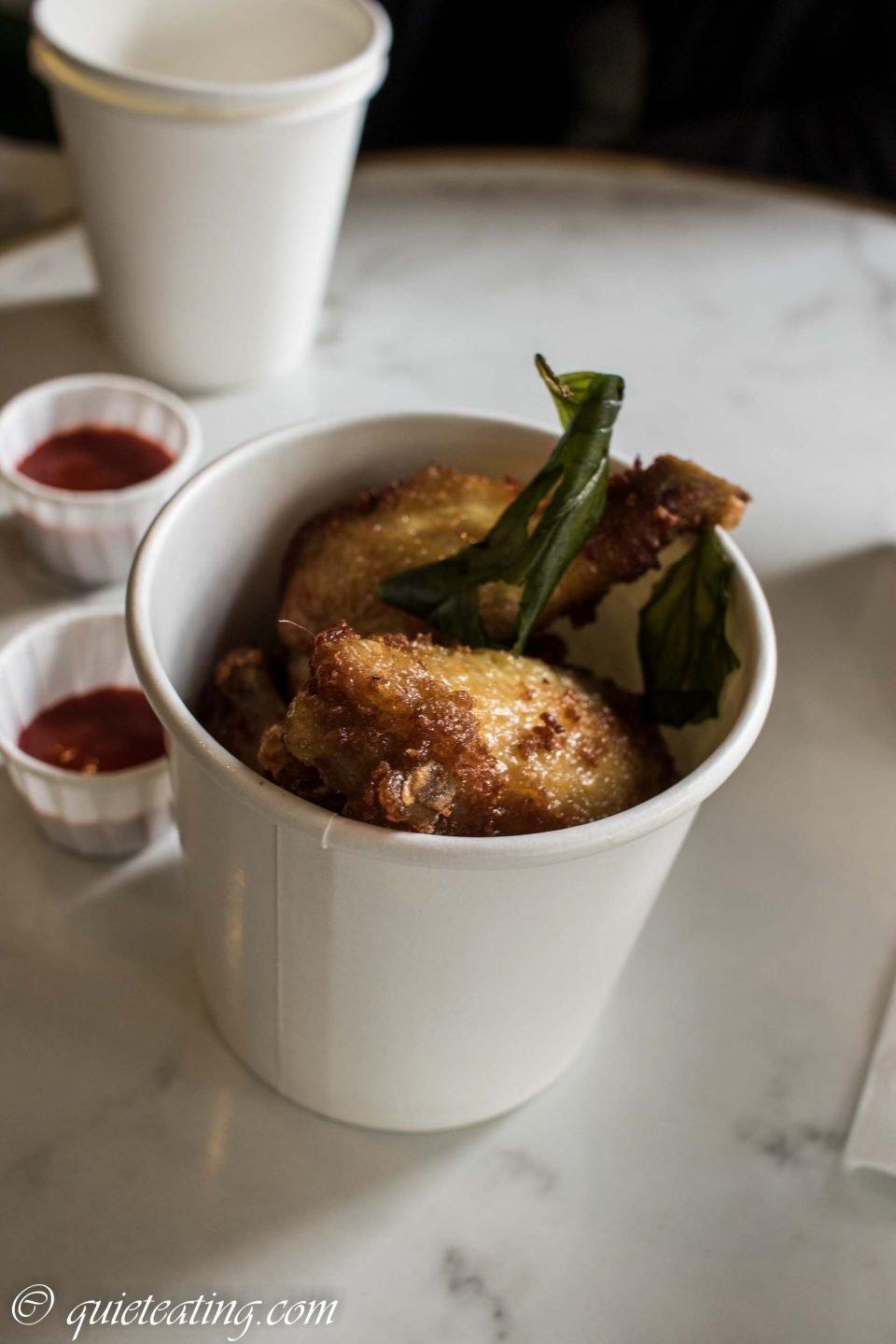 Thyme chicken wings.  Biting into this transported me back to my youth.  When I was a small boy, I loved to eat chicken wings.  I could easily make my way through 50 of them in a single sitting.  They were a touch of heaven.  Fat and skin, sometimes deep fried, sometimes grilled but always making me happy with a great amalgamation of oil, fat and salt.  These were good and like most things worth eating, quickly gone. 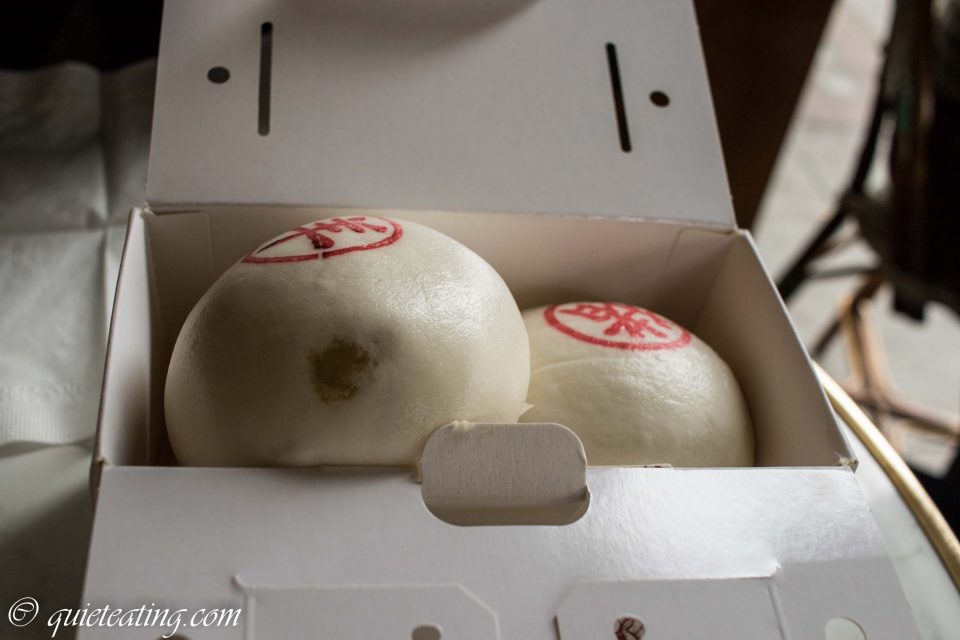 Lamb, chicken and pork bun.  These were stamped with labels, just in case you forgot what they were.  Yet how someone would be confused once they bit in seems rather perplexing.  Lamb tasted ok.  Unfortunately it wasn’t anything special.  Chicken was a bit better but just tasted as if stewed chicken had been spooned into a bun.  Which, it kind of was.  Yet, as I reached for the last bun, it was the pork where I was pinning my hopes.

If there is an animal which is central to Chinese cooking, I would say that it would be the humble pig.  That is where such great things like roast pork belly, bacon and pig trotters come from.  As I took a large chomp, I found it was the best of the lot, succulent and porky.  I know that you may think that such descriptors do not do a bun like this justice.  It’s just that I can’t think of anything else to say about this except well, it tasted of decent pig.  Hopes went somewhat unrealised. 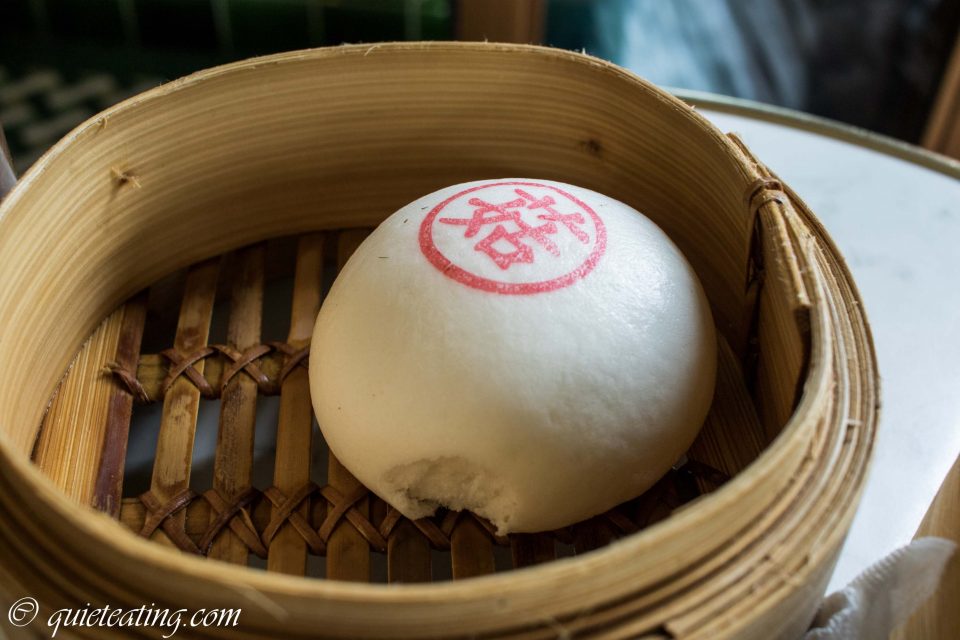 Vegetable bun.  Strangely enough, it was actually the vegetable bun which I found the best.  With thick and salty vegetables crammed into a fluffy white bun, I can imagine this is what committed vegetarians in China choose to eat.  If I came again, I would select it rather than its meaty cousins. 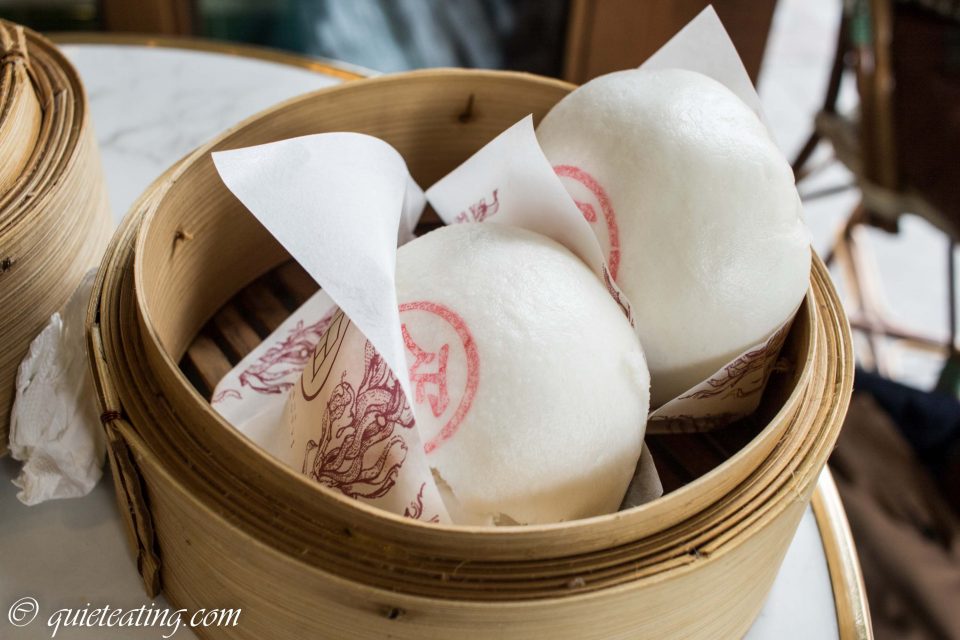 Custard buns.  This is what the place is known for.  The weeping bun [liu sha bao].  It comes with a guarantee that there will be running liquid in the centre.  I failed to take into account this warning.  When I took a chunk out, the yellow gold inside spewed all over the table.  As civilised as my manner of eating was, it was then followed up by my dining companion who showed that sometimes stupidity follows stupidity.  Once I had cleaned up the mess and reflected, I did conclude that messy difficulties aside, it was the best custard bun I had had in London.  So it is worth dropping by for this alone.

It is refreshing to find a place that doesn’t attempt to dress up the more industrial origins of its food.  Best of all is when it isn’t reflected in its price.  Although decent in its more meaty offerings, better in its vegetarian, it was the dessert which was what put it on the map.  Now all I have to learn is how to avoid messy complications when biting off more than I can chew.

Lunch (4 small dishes/buns each) was GBP 12 per person excluding drinks and service.