Sometimes it’s hard to think of witty words to say.  On occasion, I do wonder if people would notice my use of literary devices in my writing. Sometimes when my mind mightily wanders, I do spend a few moments thinking about who the people reading this blog are.  Yet, after multiple musings, I have come to an almost inconceivable truth.

Whether you read my reviews to laugh at my misfortune, for enjoyment of interesting writing or perhaps to find somewhere good to eat, you are all welcome.  The motive does not matter, only the result.  Kind of like the way that I choose my restaurants.  I might hear about new places on the grapevine, from advertisements, or more likely from insistent nagging by my friends.  Yet all that matters in the end is that I somehow end up at the door.

As it was initially presented to me, Luca is related to the Clove Club; impressive pedigree indeed, even if I have never been.  Fortunately though, their ticketing system has not been passed down to their younger sibling.  Stumping up over GBP100 for a meal weeks before you arrive at your seat seems like an excellent idea by the restaurant (interest free loan anyone?) and a particularly steep cliff to scale for the diner (I for one would miss that cash).  Yet, paradoxically, the difficulty in securing a booking, monetary (and sometimes physical) pain involved and the loss (hopefully momentary) of friends as they desert you for cheaper joys in life can sometimes be worth it when people are able to say that they have been to THAT restaurant.

So when a new more affordable outpost by an established eatery is planted, who am I to say no? 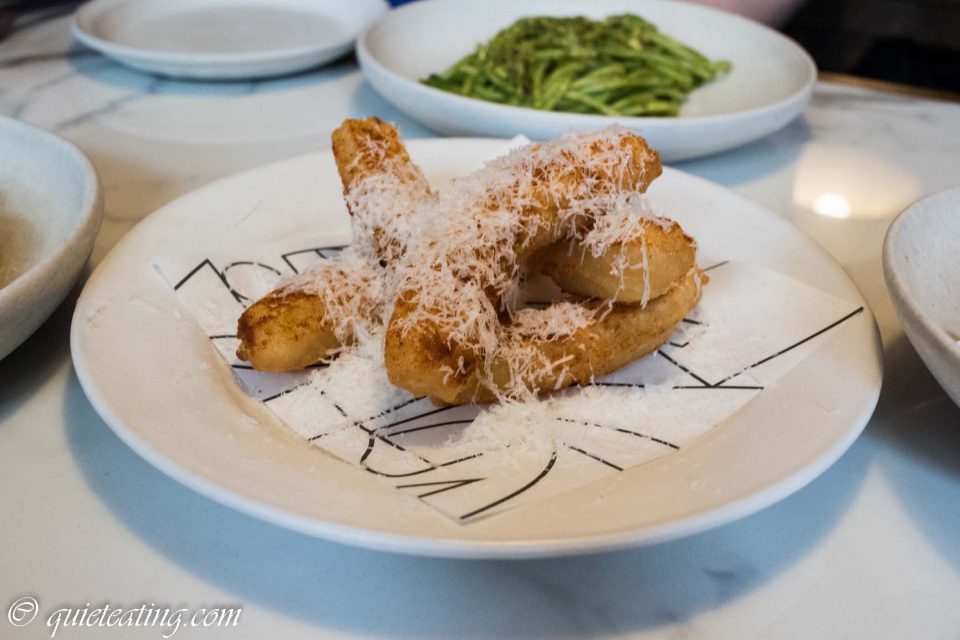 Parmesan fries.  These were not what I was expecting.  In both looks and texture, these resembled churros.  Instead of dough, think of potato, instead of chocolate think of cheese.  Then you might have a glimpse into what these are like.  Yet this only hints at what you might find and does not do it justice.  Instead what you will have to do is instead just go and try for yourself. 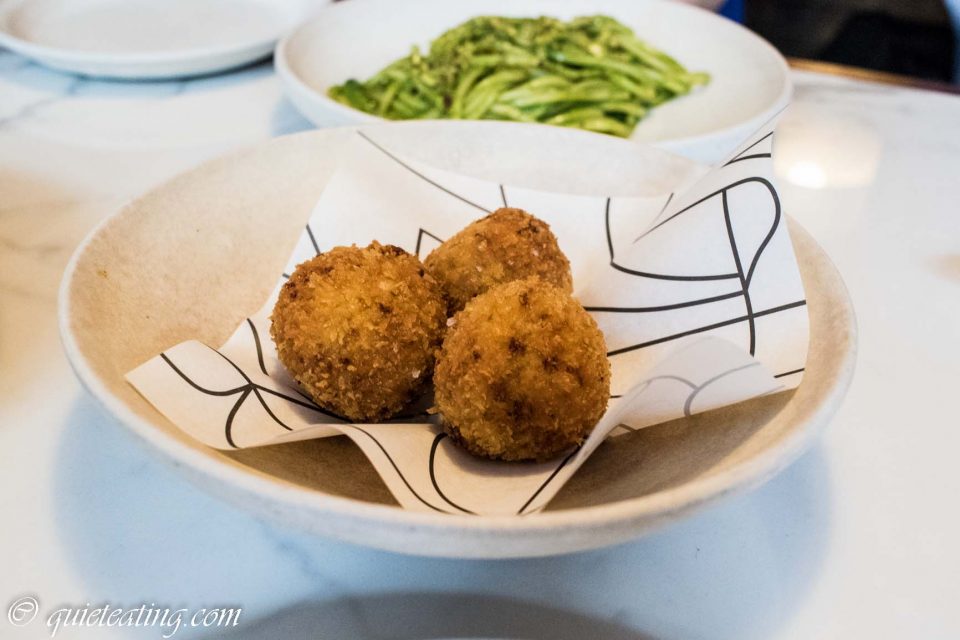 Spiced lamb arancini.  Although not as out of this world as the fries, these lovely meaty balls of rice with generous lamb filling were nonetheless delightful.  In other (food) company, these could have been something stellar.  Instead, the curse of its compatriots meant that these were just not bad. 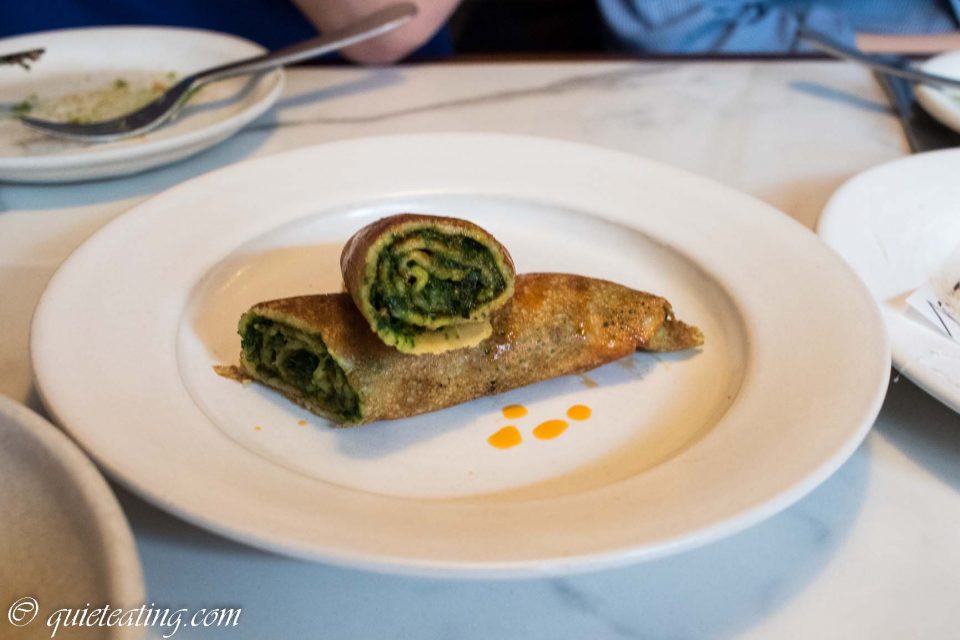 Chickpea pancake, kale and chili.  An interesting idea but not particularly exciting.  These were rather like soft spring rolls.  Decent but not inspiring like what had come before. 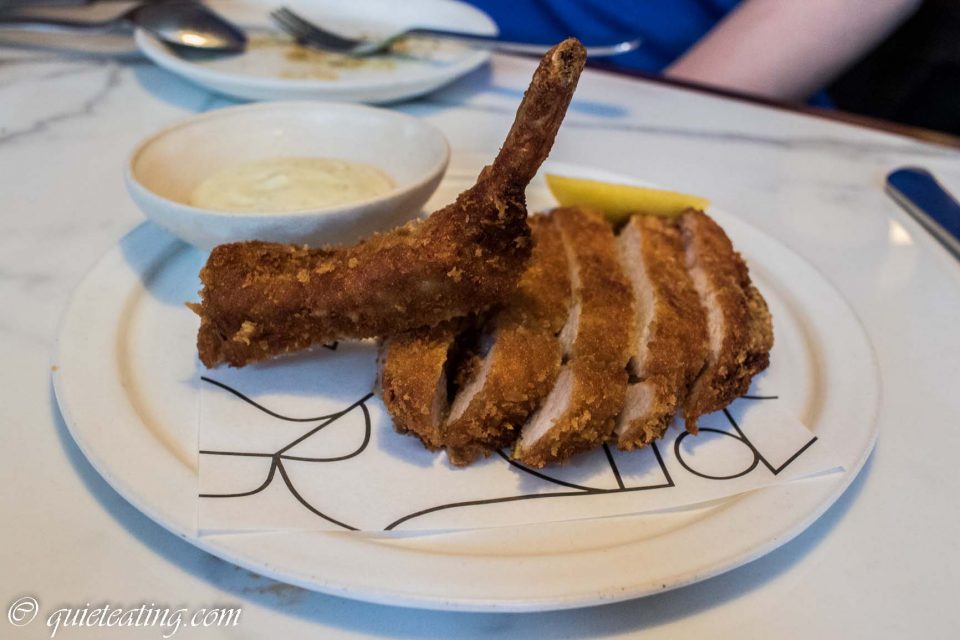 Pork chop Milanese and green peppercorn mayo.  These looked remarkably like tonkatsu, Japanese breaded pork fillets which I have a particular fondness for.  I had thought that such joys were not to be had on the British island.  Yet, I was wrong.  These tasted like one of the best examples of breaded pork chop that I have ever had the privilege of eating.  Remarkably moist and juicy, the remarkable porky taste was set off by crispy bread crumbs and a remarkable mayo dip which only served to heighten the deliciousness of the meat. 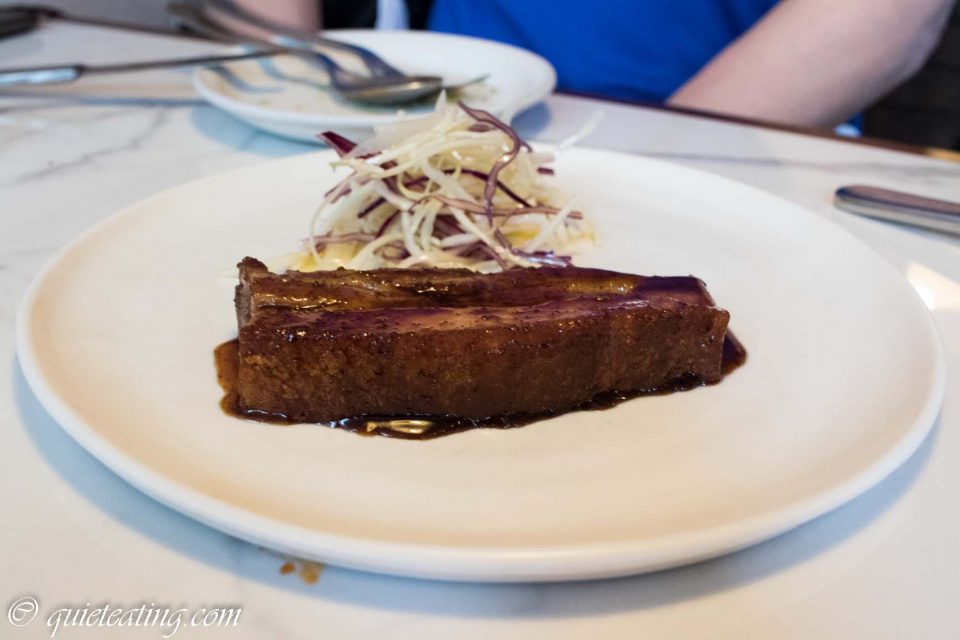 Crispy pork belly glazed in molasses and fennel vinegar.  Falling apart, and moist with coleslaw on the side.  These were good but paled in comparison to what had come before.  At this point, my friend did point out that we had eaten every pork dish on the menu.  Maybe if we hadn’t had the full repertoire of pig dishes, this would have been something else but in such company, maybe best to use your stomach space for something else. 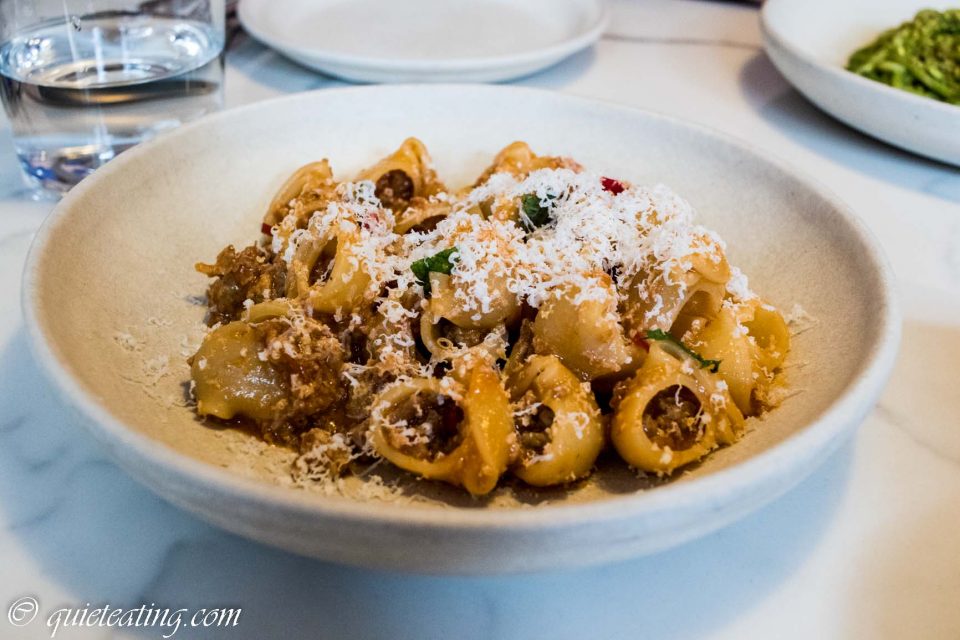 Conchigli with pork sausage, tomato, anchovy and mint.  I’ve had some great pasta in my day, Padella comes to mind.  This dish was one that can stand with the best.  With delightful al dente pasta, rich pork sausage in deeply flavourful sauce, finished with a sprinkling of cheese, these were something to write home about.  My only complaint was that the dish was of a rather diminutive size so it was quickly polished off.  I guess the mark of a good dish is that you are left craving for more. 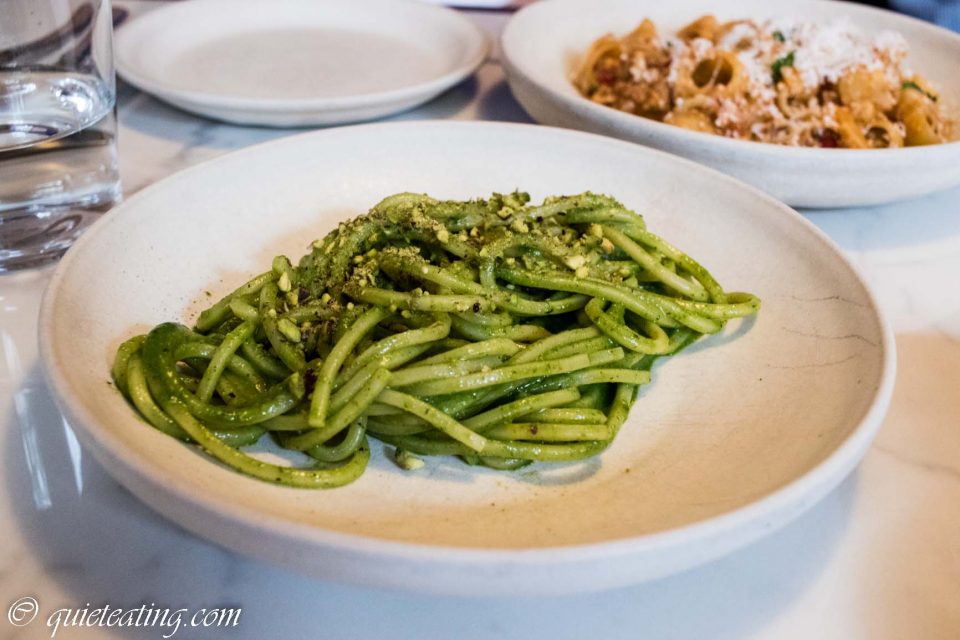 Spaghetto quadrato with pistachio pesto, lemon and parmesan.  I learnt a new word today.  Spaghetto, the singular of spaghetti.  These thick spaghetto had delightful bite while sitting in exceptionally sapid pesto sauce.  This heady mix reminded me that vegetarian food is not all that bad as I learnt during my journeys in Nepal.  With the savoury now done, it was time to try the dessert. 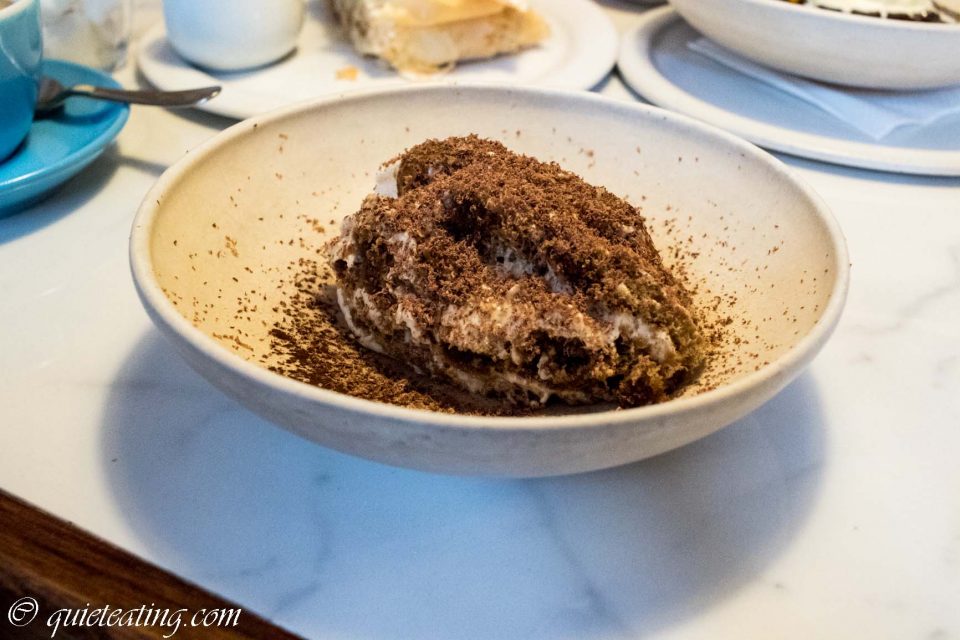 Tiramisu.  It seems to be a theme nowadays to go for deconstructed food items.  Maybe an excuse to just serve something which is maybe not put together with the normal aggregate number of steps.  Yet, sometimes it can go horribly wrong as the sum does not add up to the parts. Instead, it is something less.  This was unfortunately the case here as it lacked spark and flavour. Could have been so much more if the skill apparent in some of the other dishes was applied here.  Instead, it was eminently forgettable. 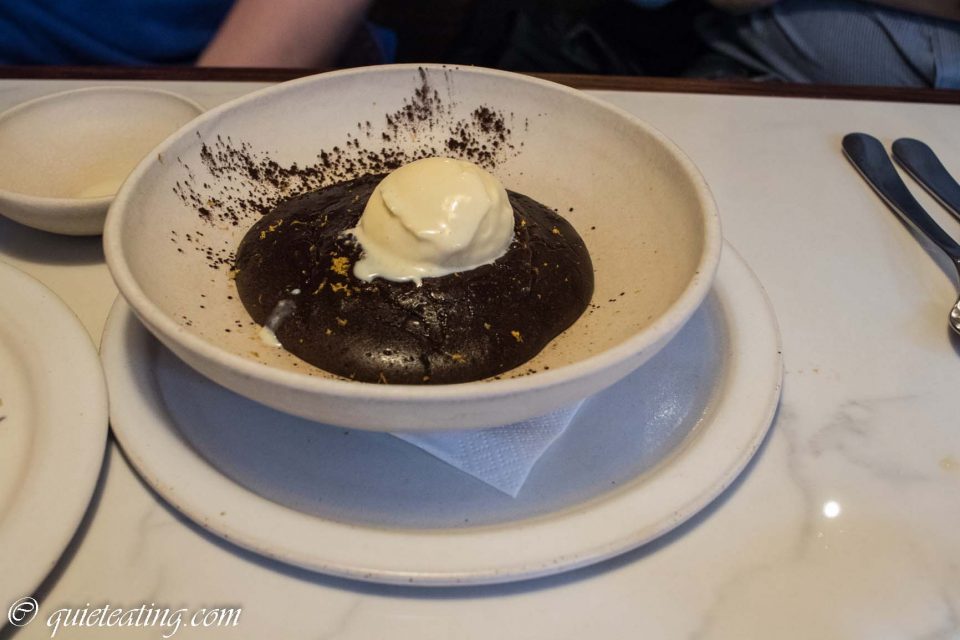 Baked chocolate mousse and roast barley ice cream.  Not something I had previously tried.  The chocolate mousse managed to avoid being a sugary black tar and instead was a slightly bouncy chocolate layer without being overwhelmingly chewy.  The barley ice cream with a particularly mild taste set off the depths of the chocolate well.  It transported me back to days of guilty pleasure licking the mixing spoon when helping my mum to bake.  That is an easy way to pile on the pounds. 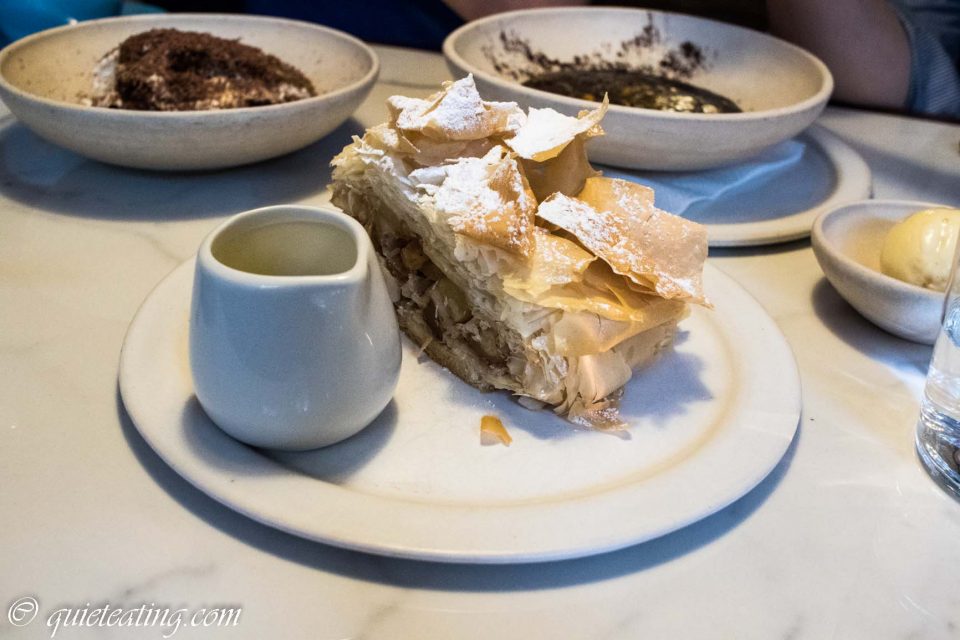 Warm apple crostata and custard.  Yet, good as the mousse was, better was to come.  The crostata was airy, yet with touches of tartness, sweetness and crunchiness all rolled into one.  An inspired apple dish especially with the touch of custard.  A stand out dish. 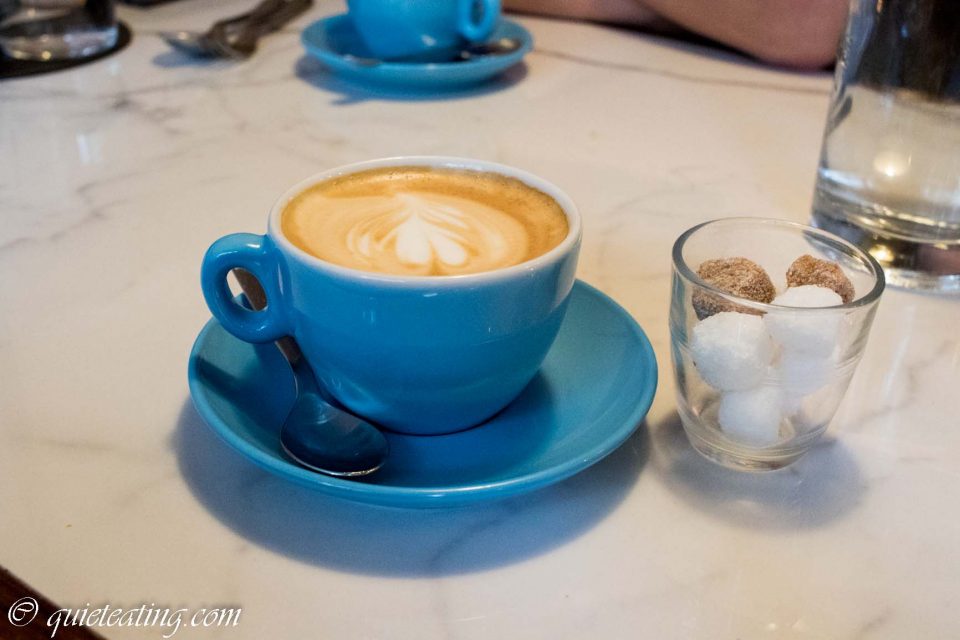 Workshop coffee latte.  At the end what I must especially applaud is the coffee.  From my favourite coffee shop in London it was an exemplary way to finish.  A great end to an excellent meal.

Luca was a great night out.  This far more affordable cousin of the Clove Club has much to recommend from the inspired fries,  the exemplary pork chop and the crostata.  It was also a great way to sit back, enjoy the little pleasures of life and gabble gossip around so choicy cuts of fantastic fare.  And if this is where listening to my friends leads me, perhaps I should pay attention to them more.