It appears that Haggerston is on its way up.  With the artfully distressed looking buildings, to the hipster coffee places offering much, presenting rather less. 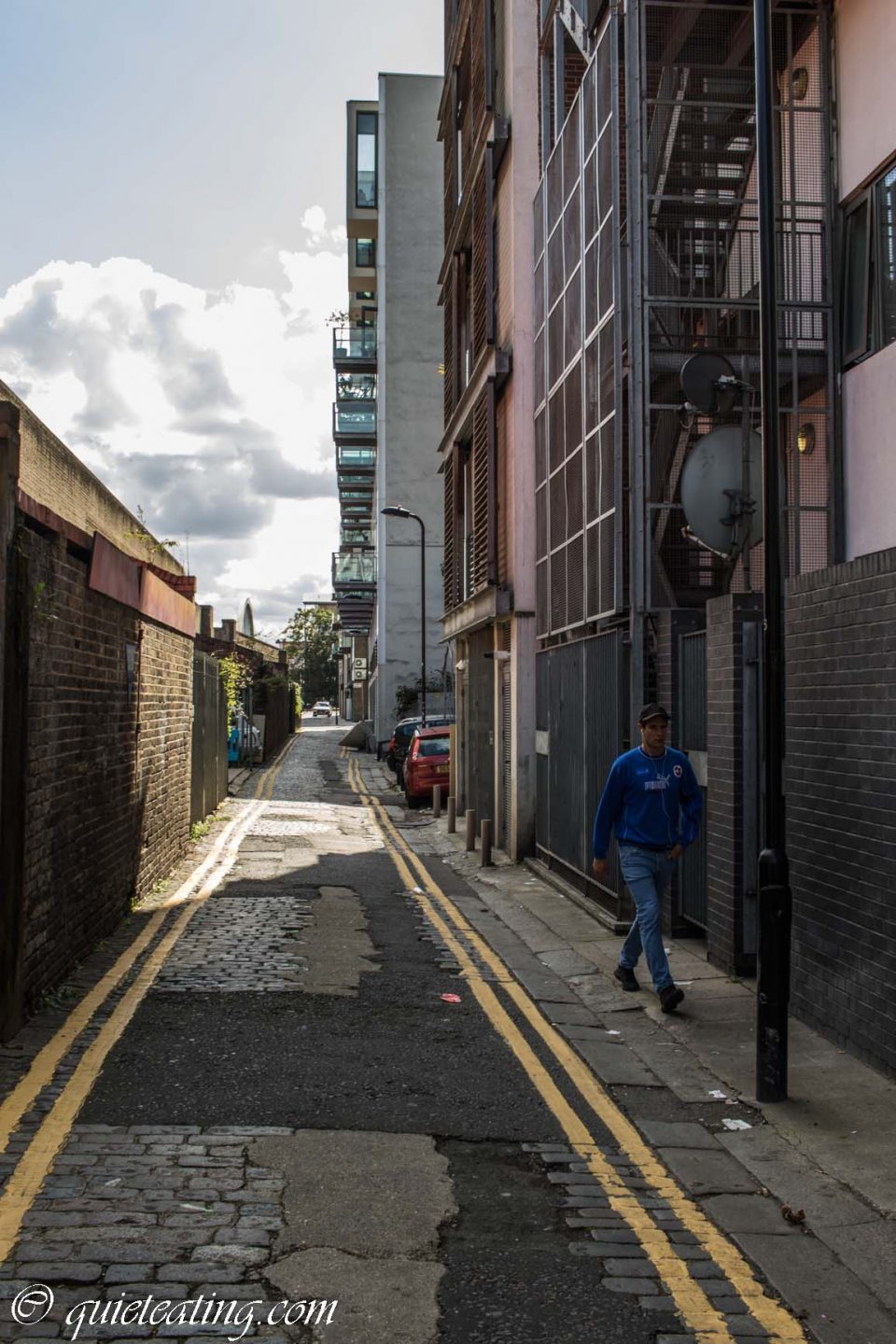 Observe the path from the tube station to the location.  Iron gantries rising on the right.  Worn brick walls and an active train track on the left.  Rubbish artfully littered on the floor.  Well, I think the latter is probably unintentional but on a positive note, it adds to the vibe.  I always did find it curious as to why people expected “authentic”, “trendy” and “well cooked” food in less than established and perhaps more unclean surroundings.  Maybe it is in the expectation that the elbow grease, sweat and toil from the kitchen might somehow make it into the food.  Providing an interesting element. 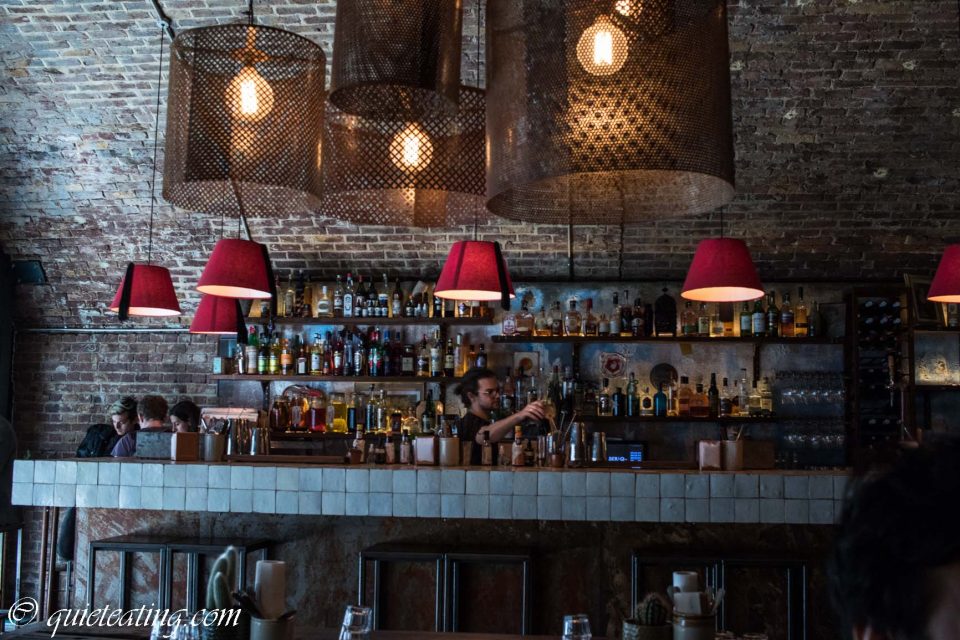 The bar that greets you as you arrive.  Berber and Q, located under the railway arches, with high ceilings (to better absorb perhaps hysterical laughter) lures you in with this particularly forward looking bar with a wide variety of poisons, (drinks) under interesting lap shades.  With the black tails hanging off the side of the lamp covers, it brought to mind the bellhops I had seen in Egypt on my travels.  It helped to evoke a middle eastern feel, no doubt that was the intention.

We were soon to bear witness to a fascinating gathering on the table next to ours.  A gokon or in English, group date was being hosted.  As each new participant arrived, they introduced themselves, ordered a drink (no doubt they were assessed on the strength of their particular order) and then chose their resting place.  Although at first, the table started off rather subdued, as the liquor began to flow more freely, a more rambunctious side emerged.  By the time that we left, it had yet to escalate to gyrating on the table, but at the rate that they were knocking back the beverages, interesting things were no doubt coming to a head soon.  I wish them all the very best.  If they do wish to entertain from the table top though, I would caution them to watch the potted cacti.  If the worst happened, it might add an unwelcome “edge” to the restaurant.

Yet despite my usual distracting remarks on things that are not directly food-related, here is my attempt to make up for the lack. 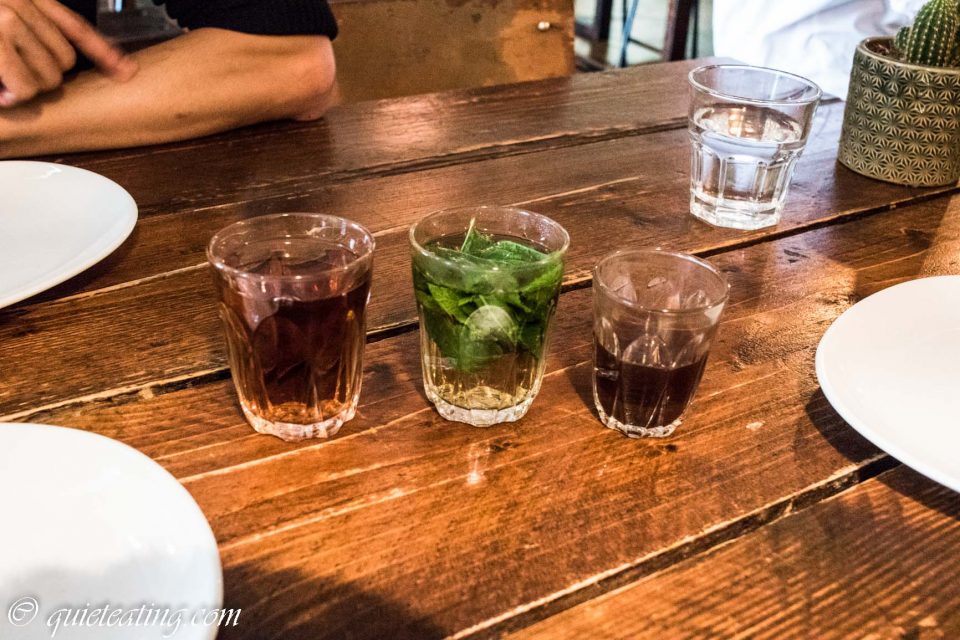 Cay tea, mint tea and Turkish coffee.  Our lack of interest in lingering to find out what would happen next was maybe because of the fairly miserly portions we were to receive.  Starting with the drinks.  They were average and I note a little tepid after a while.  Perhaps a lesson not to serve hot drinks in glass tumblers.  The taste was fairly light and the volume rather small.  These were not for me. 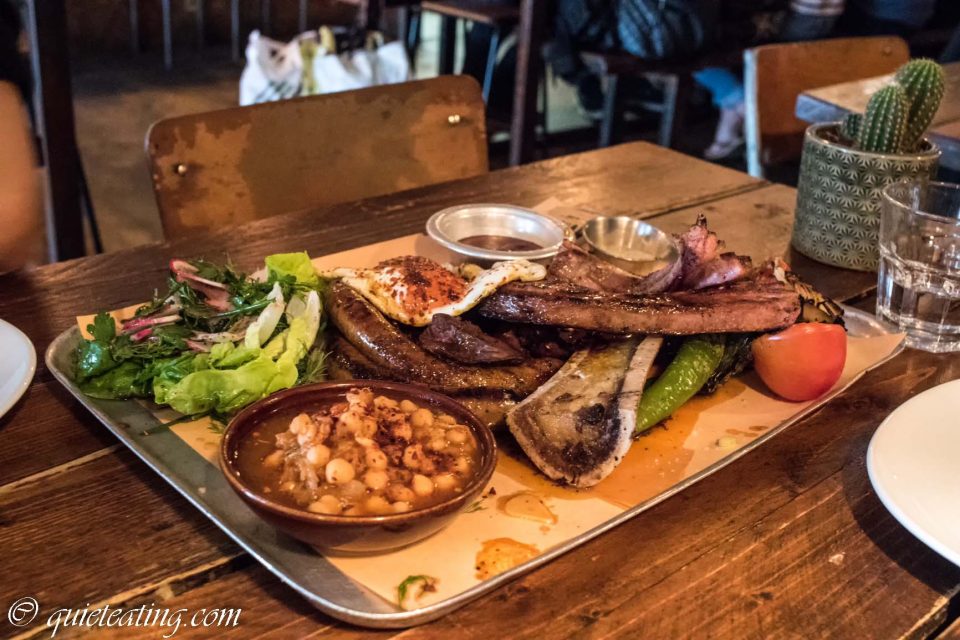 Mangal breakfast, lamb bacon chops, pork merguez, mushrooms, fried eggs, lamb kidneys, roasted bone marrow, lamb belly chickpeas, biber salcasi ketchup.  A magnificent spread, delivered in no frills style.  On a metal plate with some wax paper.  I could say that it doesn’t get more authentic than this but I bemoan the overuse of this hyperbole.  I could call it more industrial than expected but this is under train tracks.  This presentation went well with the artfully stained chairs.

The chickpeas were just as expected.  Chickpea like.  Standard.  The pork merguez were juicy and tasty.  Even though two for the price of GBP30 was a bit much.  The lamb bacon chops were delicious and juicy with a good amount of seasoning.  The fried eggs and mushrooms, rather decent, although nothing to write home about.  The roasted bone marrow, delicious with the bread and the kidneys ok.  All in all, a decent platter, if a bit on the pricey end for not that much. 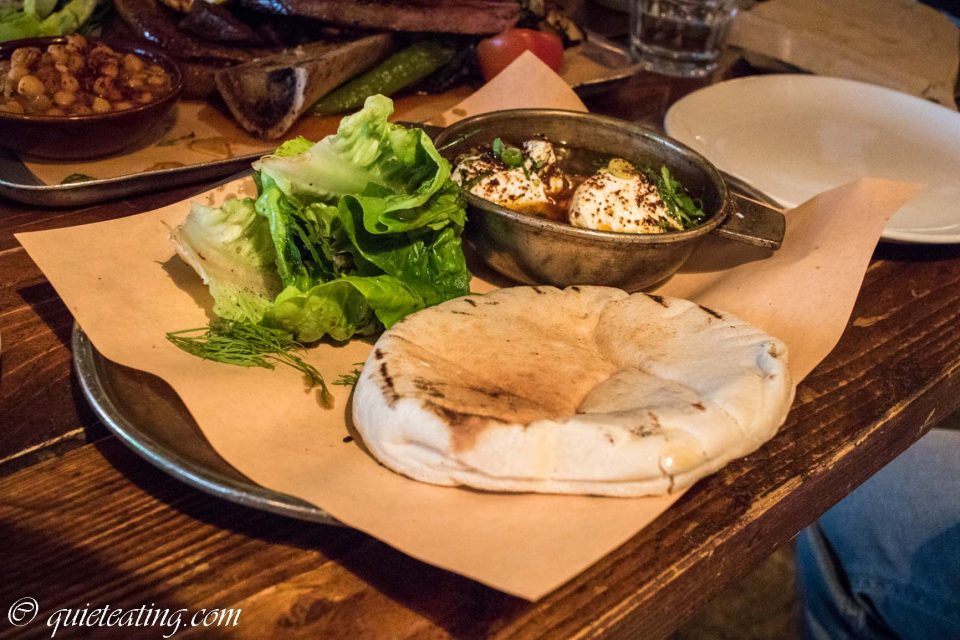 There is much to be gained from first impressions.  They often help to save us time.  Like the time I avoided the dodgy looking seller of roast peanuts in the park that other day.  The best thing that I probably would have caught from him would have been a case of indigestion.  At other times they can be misleading.  Such as when I was so worried that a showmanship dinner of people playing with their food would be bad.  Yet most of the time, I find they are broadly correct.  I guess this place displays a dining experience that is readily apparent on its tin.  It tried hard but at times didn’t go that well but there is another reason to visit, if not for the food.  At least the spectacle was interesting.