I decided to return to the Square to try their full tasting menu as I had been so blown away by their lunch service.  As the price, including wine, was to be an eight fold increase, was the food eight times better?  You might be wondering how I got to this figure.  Well, the geek in me contends that if I take a number, let’s say 2 and cube it (2 x 2 x 2) I do indeed get 8!  Which is  2 cubed!  I gave myself a pat on the back for my witty turn of phrase and mathematical ability.  Go me!  Having put such self-congratulations out of the way, let me turn my attention to the food. 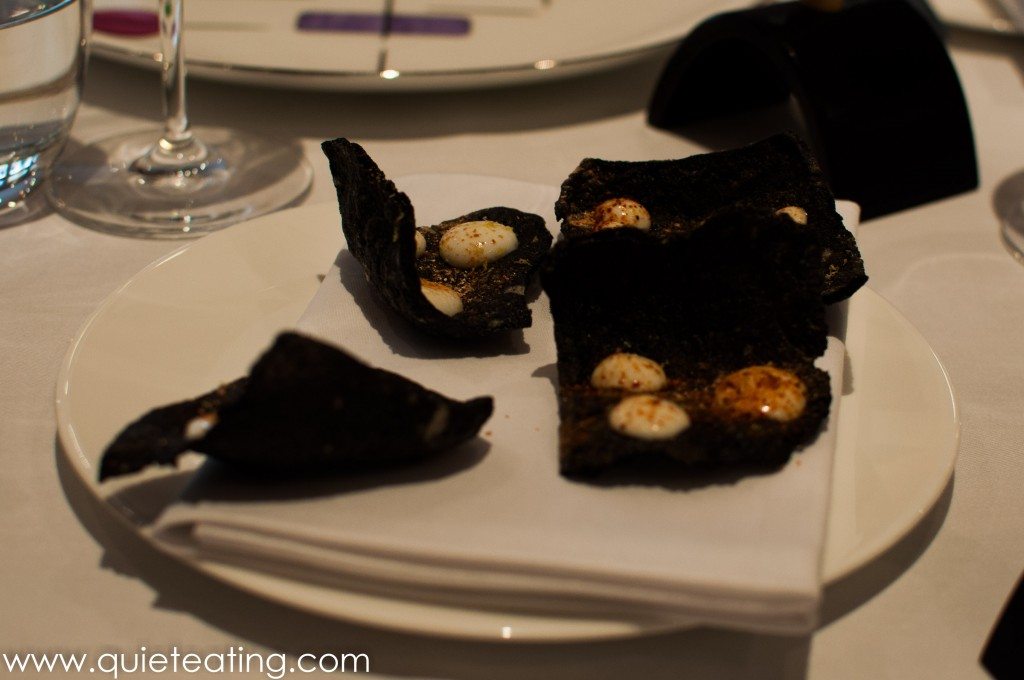 First up, something that looks very familiar, the prawn cracker thing I had before.  Just as good as last time. 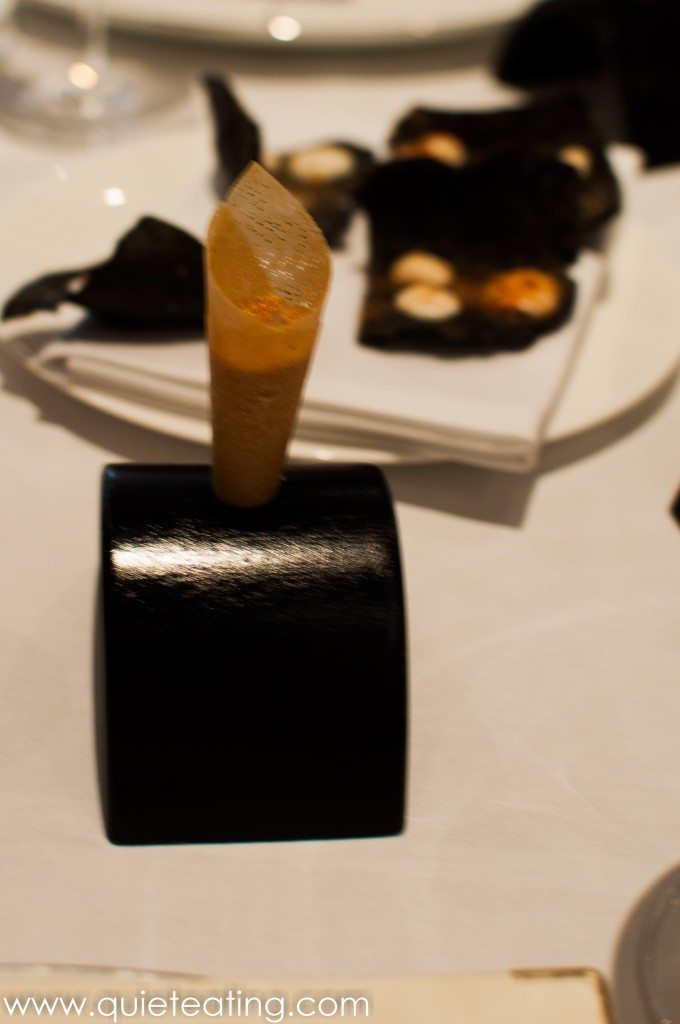 The signature spring roll, which comes in many guises.  Today’s permutation was filled with foie gras.  Although, it strangely had a hint of something that tasted like durian.  For my fellow dinners hailing from South East Asia, which the durian calls its home, the “king of fruits” as it is known, lived up to such lofty expectations. 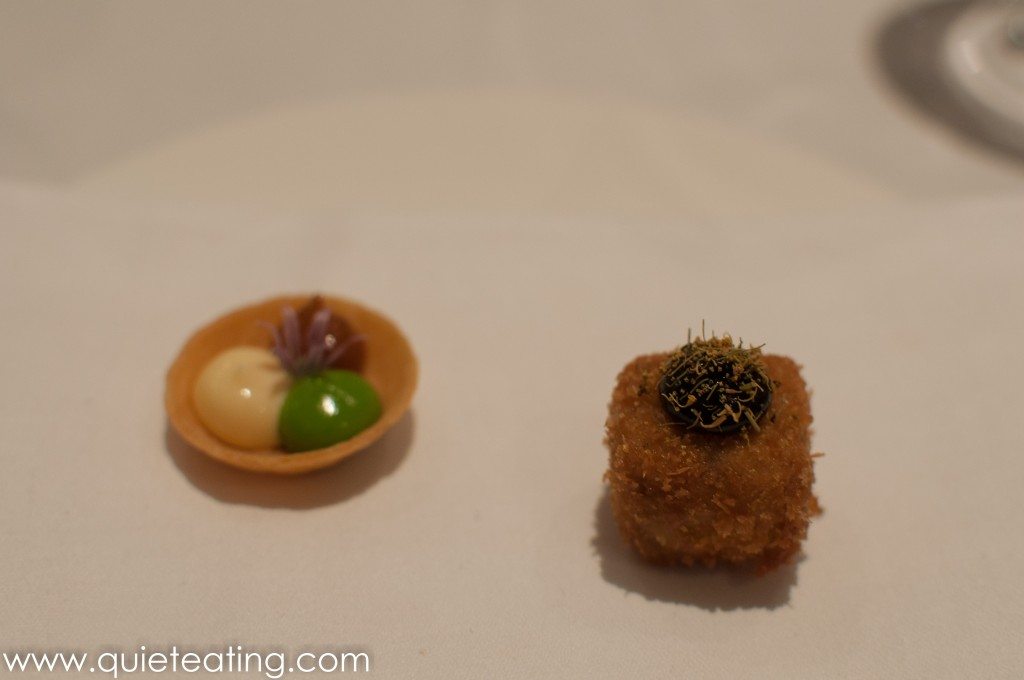 Again here, another familiar bite for me.  This was the return of the exquisite pig’s head and yes, it still tasted like it fell from heaven.  Now coupled with a tri-coloured tart, which combined earthiness, richness and veggieness to convey an interesting and pleasant mix of elements. 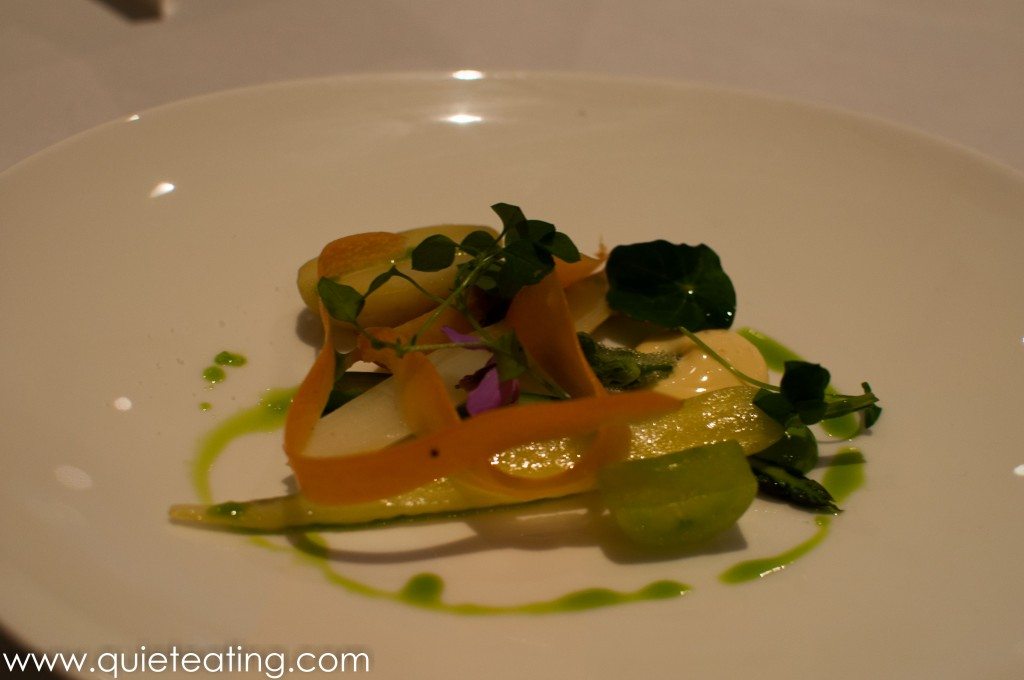 Salad of spring vegetables with percorino sardo fondue, shoots and blossoms.  Finally, time to start the main part of the journey after some little amuse bouche pre-starters.  Beginning with a healthy vegetable salad, beautiful presented.  My friend here remarked at how the vegetables were so well cooked that they managed to retain just the right amount of crunch.  A difficult task as when I cook rabbit food (as I term vegetables), it tends to congeal into an unidentifiable mass.  At this point, one of the my fellow diners noted that as the requisite healthy element had been fulfilled, he had high expectations of more tasty (read unhealthy) things to come.  He was not to be disappointed as the dishes continued to increase in richness as dinner progressed. 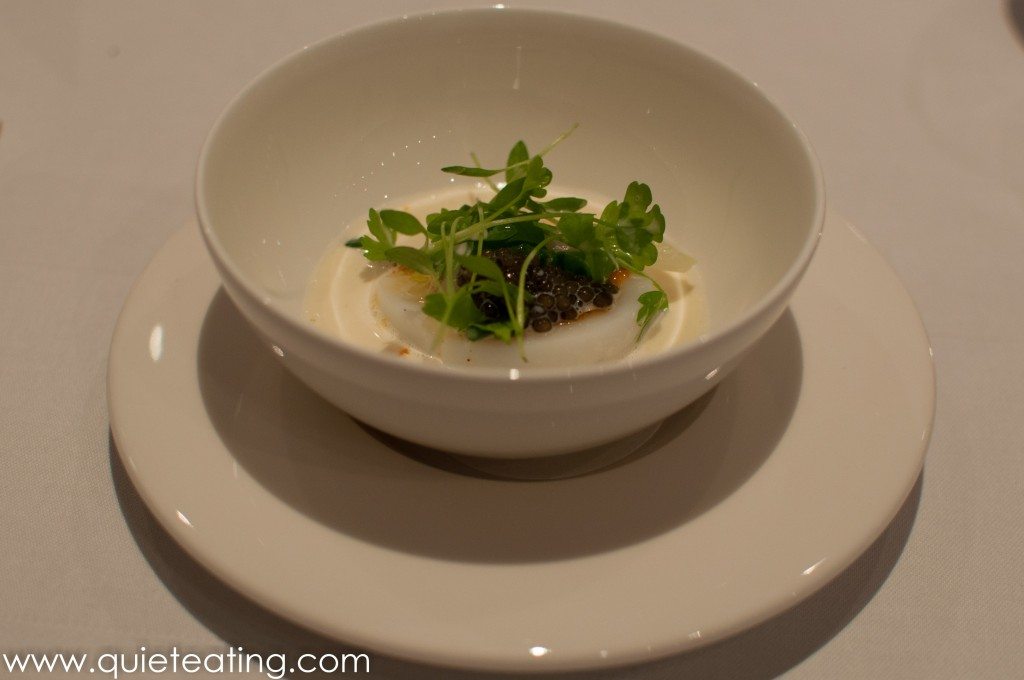 Soft boiled black headed gull’s egg with a remoulade of St Austell bay mussels, cultured cream, sea grasses, lovage and oscietra caviar.  I admit to being very intrigued by the title of this dish.  What is cultured cream?  Do the cows have to learn their sums to earn this accreditation?  Maybe they have to learn their 2 times table and are only able to label their cream cultured when they learn what 2 cubed is.  In any case, the egg combined with the caviar and cream created a rich but not cloying flavour of delightful umami. 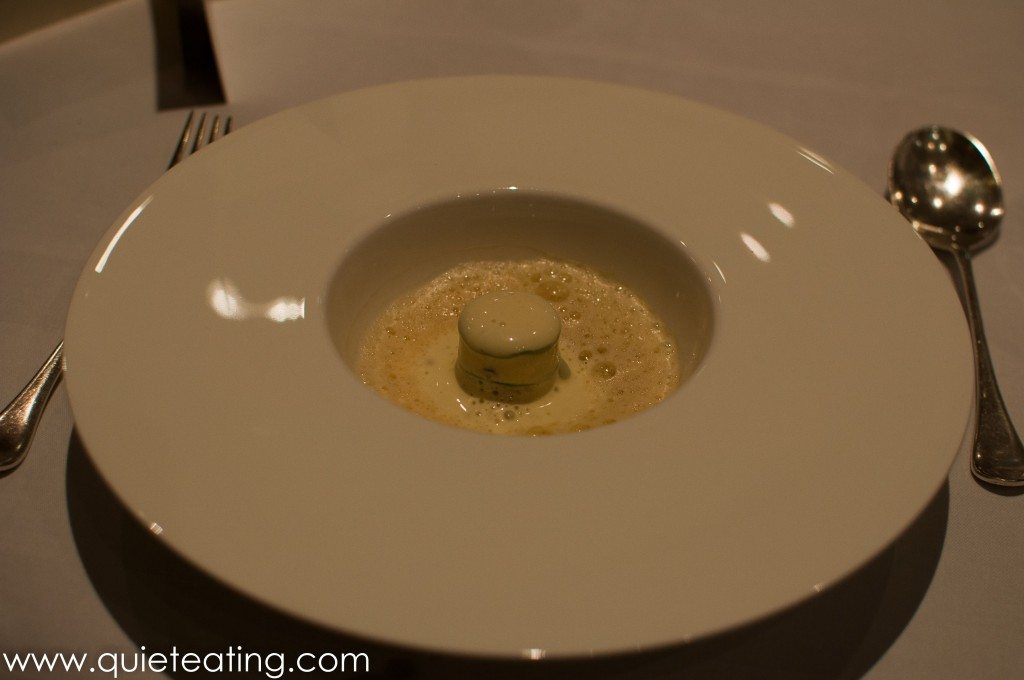 Lasagne of Dorset crab with a cappuccino of shellfish and champagne foam.  I found that this was the first dish which made me think wow!  What is this?  I never knew you could make crab taste like this!  It did in fact have a lasagne like texture which if I were to hazard a guess may have been produced by painstakingly twining the strands of crab muscle to create sheets to hold together the shellfish and allow the champagne foam to seep in.  Maybe this is a punishment role in the kitchen, like the peeling of the potatoes.  This dish tasted exceptional. 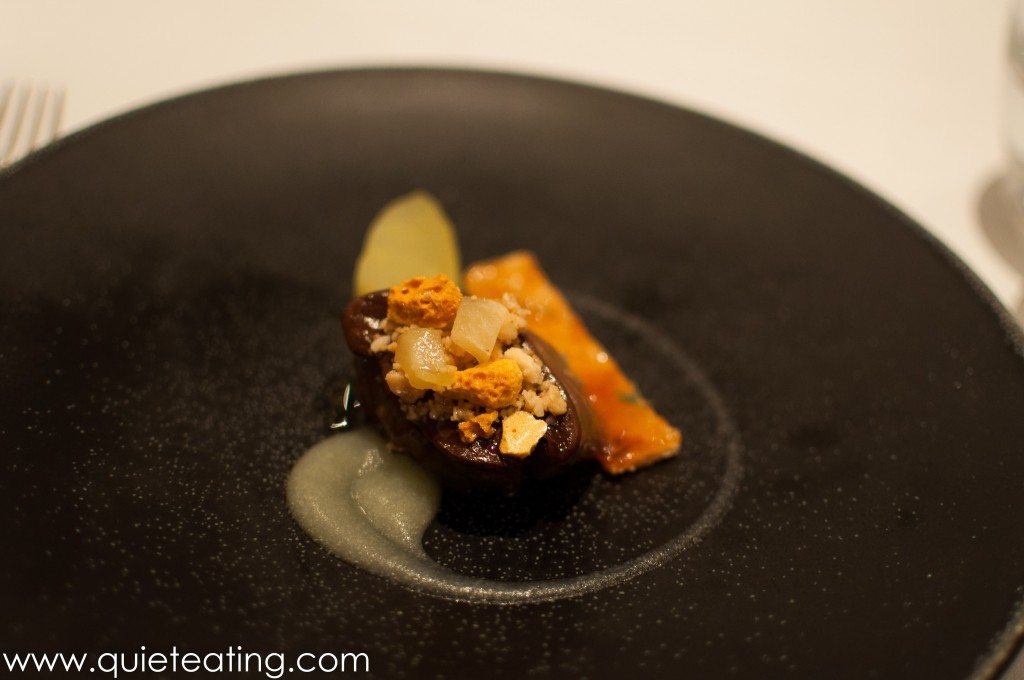 Roast escalope of foie gras with GoldRush apple, macadamia nut, wild thyme and honey.  The tart to the right of the foie gras was an inspired choice.  The taste of thyme and honey provided an interesting contrast to the creamy foie gras as it melted in my mouth.  Things seem to be on the up and up! 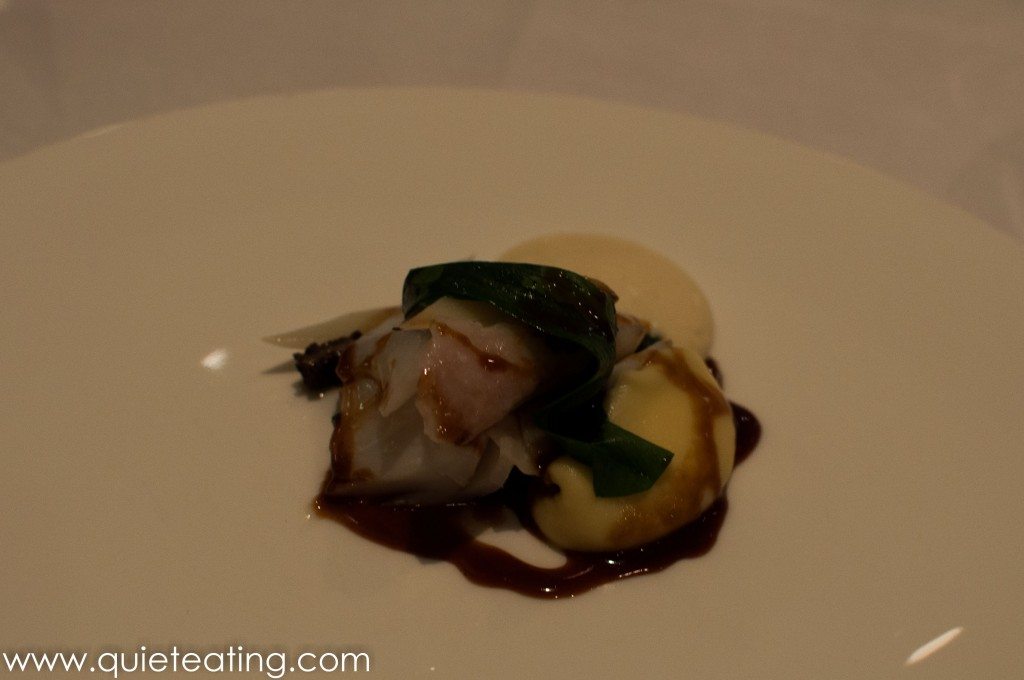 Slow cooked Cornish cod with creamed potato, morels, white asparagus, spring garlic leaf and red wine.  The next course continue to amaze.  The cod was cooked perfectly so it flaked off but managed to maintain enough structural integrity to make it to my mouth.  The red wine sauce in particular amazed me with its rich flavour complementing, but not overpowering the cod. 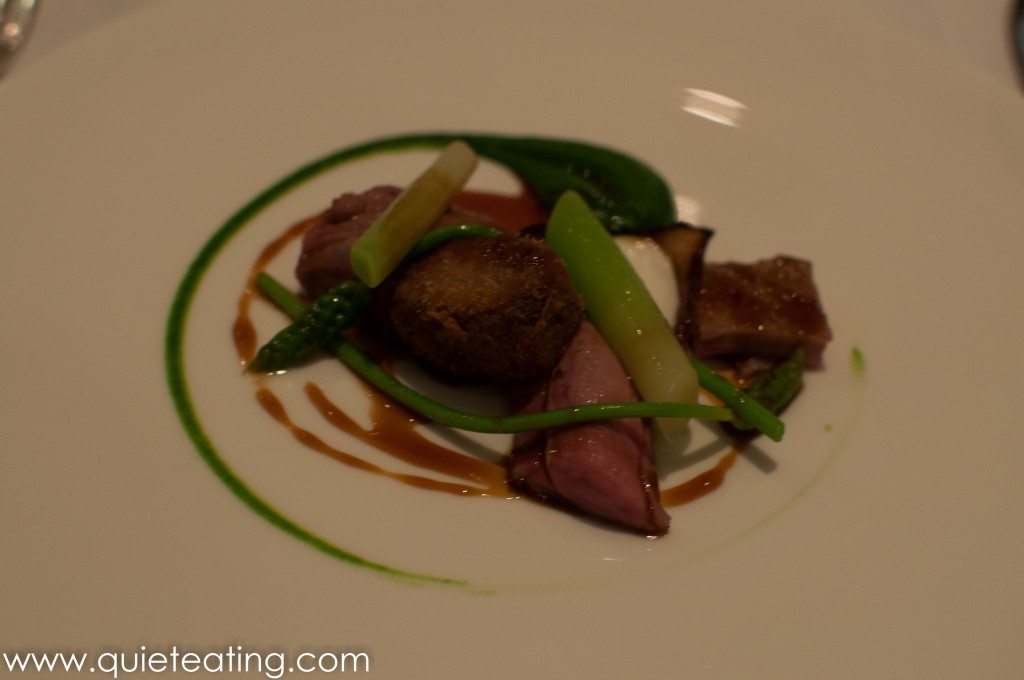 Saddle and best end of milk fed lamb with sweet garlic, wild asparagus and young cabbage.  At least this is what I think it was.  As the waiter plonked this down without too much ceremony and quickly beat a hasty retreat.  I was very puzzled at this waiting behaviour.  I wasn’t too fragrant (I checked) so it couldn’t be that.  Maybe I had something stuck on my face.  Assuming it wasn’t me, I found such type of service to be strange.  In any case, returning to the food, when it was so artfully arrayed I almost was too afraid of disturbing the display to eat it.  Actually my tentativeness lasted all of 5 seconds before I gave in.  The lamb was cooked perfectly to a light pink so avoiding the mushiness that I have experienced when I cook lamb myself. 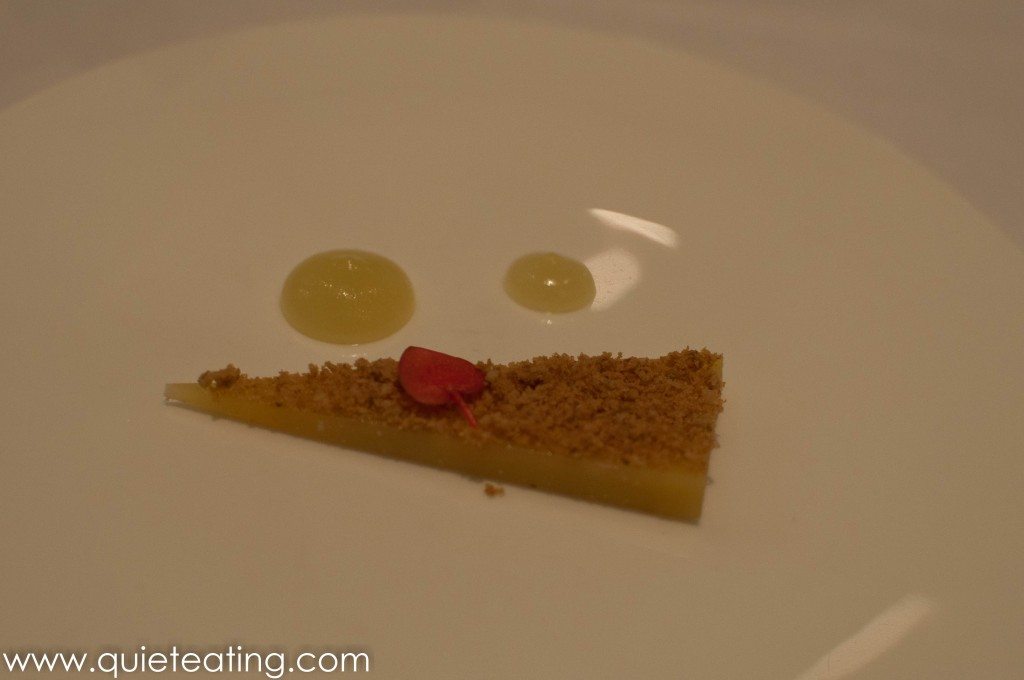 18 to 24 months aged Comte with apple sauce on the side topped with crumble.  This is actually the first time I have had cheese as a pre-dessert and it managed to cleanse the palate admirably.  Although I did note that when the time came to set the table for the next course, the waiter seemed to engage in a swipe across my body.  Something I found a bit out of place given the silver service. 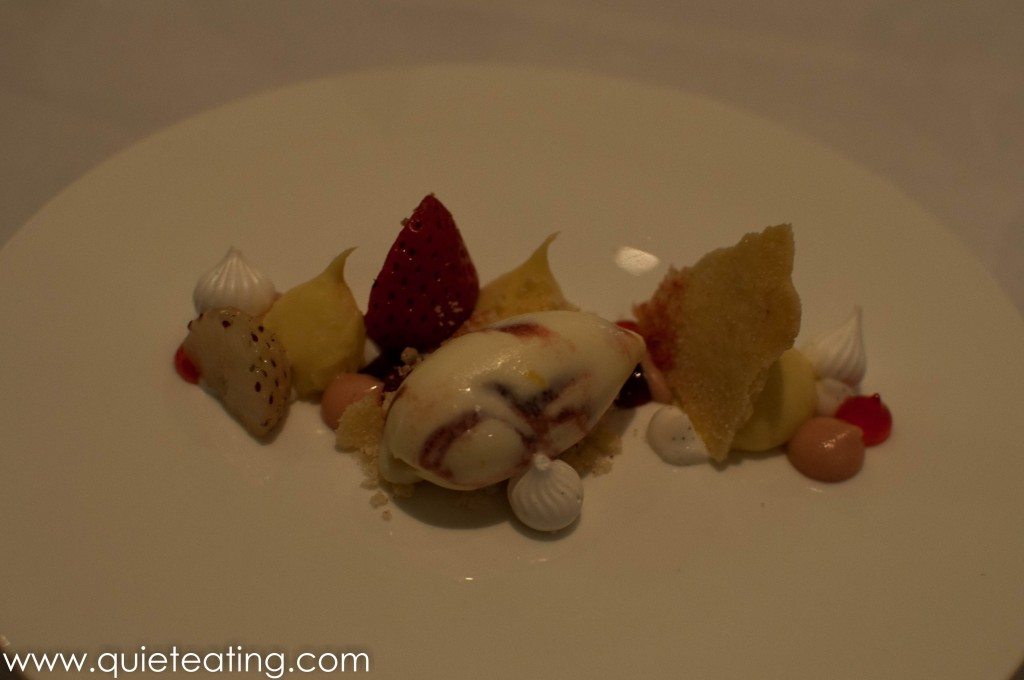 Wild strawberry shortcake.  This looked suspiciously like the dessert I recently had just down the road at Hibiscus.  The arrangement was almost identical and I approached this dish with a bit of trepidation given my previous experience of a course in this form.  Thankfully, it was far superior!  The little yogurt(?) drops when mixed with the heavenly strawberries created a very pleasant amalgamation.  A delightful crunchy and creamy texture when combined with sweetness and a hint of tartness created a winning combination. 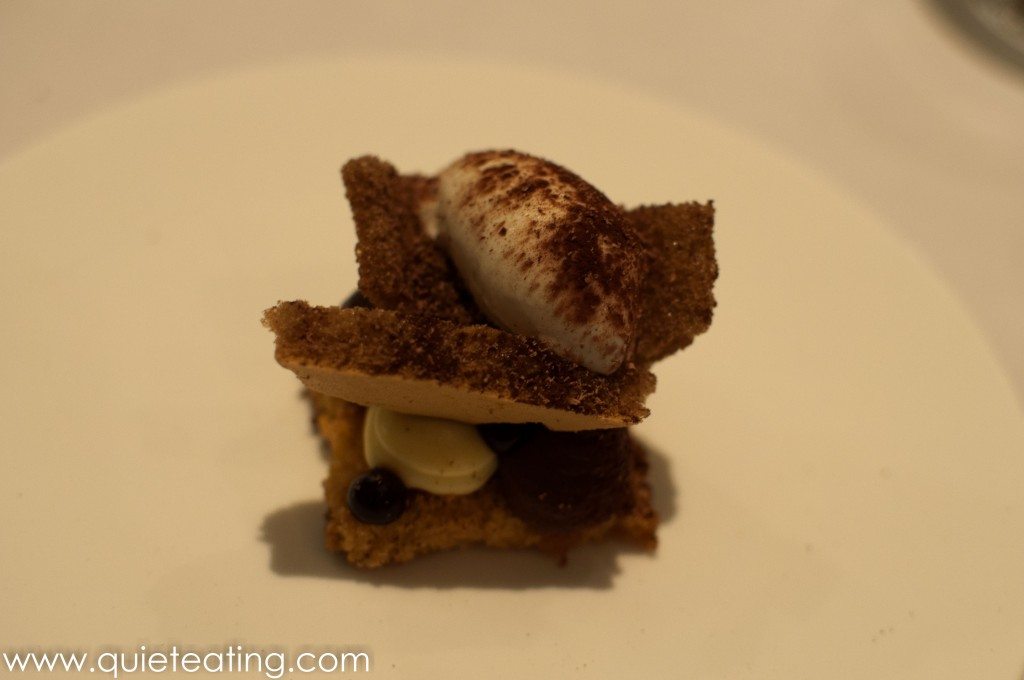 Tiramisu.  A lovely deconstructed tiramsu.  Artfully arranged so that it still retained its shape in the absence of a small cup.  The biscuit layers were very crunchy, an interesting counterpoint from my usual experience when the layers were usually rather more sodden.  The interplay of this unusual texture with the creamy taste served to elevate this dish from merely not bad to something out of the ordinary. 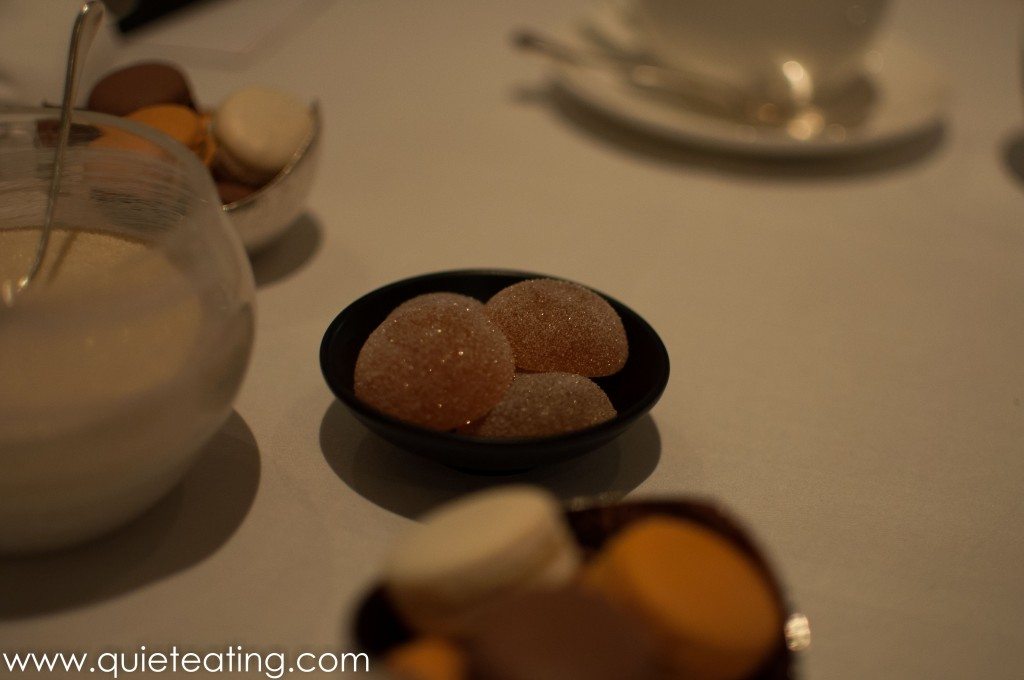 Lime jellies.  A little bit of tanginess to remember the Square by. 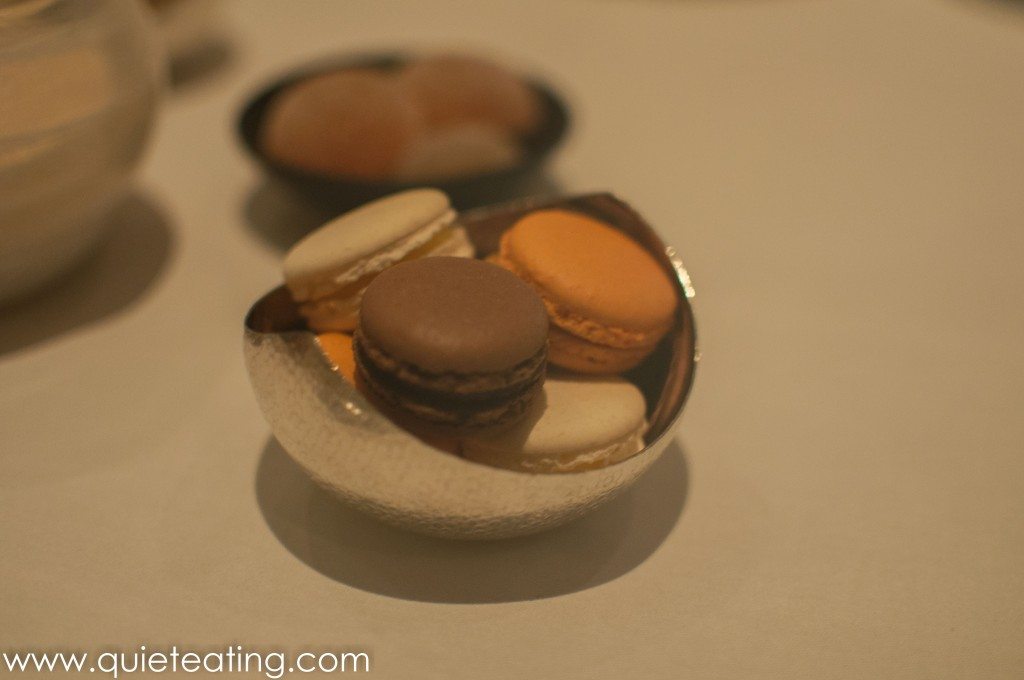 Macaroons.  So delightful that I think they would give Pierre Herme a run for their money.  An excellent end to this meal.

A very interesting experience which provided a counterpoint to Hibiscus.  In this case, the food was excellent but the service surprisingly seemed to lose the plot at points.  In Hibiscus, the service was very good; however, the food was somewhat lacking.  I blame my distraughtness with the Square’s service on the fact that on my previous visit I received some of the best service I have ever received at a restaurant.  I had high hopes that this restaurant just might be the first one to score more than a quiet eating 9/10.  Unfortunately, this was not to be as the service seemed rather erratic.  Maybe they were busy practicing their two times tables in the back?  So, unfortunately, although the food was excellent, it was let down by the subpar service.  At this price range, I would have expected not only the food to be perfect but the service too.

Addendum – Visited the square a further two times.  Would still keep the score at 8.