It’s been over a year since I’ve been to Elliot’s.  With a friend visiting from overseas clamoring for reminiscence, we decided to visit this first “good” meal that she had in London a long time ago at Elliot’s.  I was so excited to relive memories of my own, I forgot to bring either of my cameras.  Apologies for the bad photos as I had to revert to my phone like a good little tourist.

When we arrived, the restaurant was buzzing and filled to capacity, a very promising sign.  We were later to find out that this heaving mass of humanity was maybe a reason for our “interesting” level of service.  More on that later.  I was particularly impressed when we gave the waiter our order that he didn’t write anything down.  I suffer from a goldfish memory so have to note down everything.  Being able to remember 10 order items is very impressive! 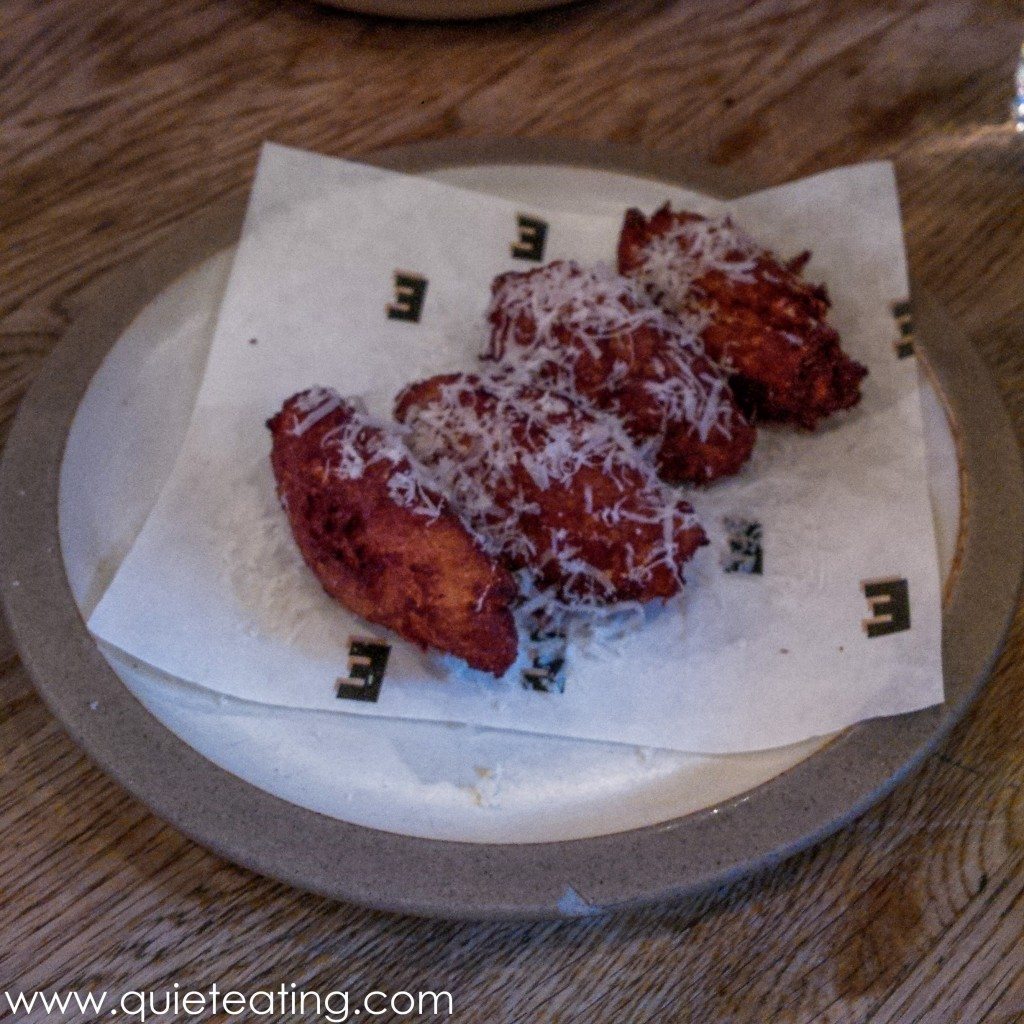 Some cheese puffs to start.  Not bad, crispy on the outside followed by gooey savoriness inside.  The only issue, which might have been due to the waiter’s style of taking orders was that we hadn’t asked for them.  Although it was a little pleasant surprise so I wasn’t going to complain.

The business of the restaurant meant that the staff seemed a bit overworked.  Maybe this is the reason for another dish which we had not ordered being dumped on our table.  When we waved a waiter over to explain that this was not ours, the reply was “you don’t want it then?”  *waiter rolls eyes*.  Well…  If you are going to do that, then no, I don’t want it!  I hoped that this attitude wasn’t carried over in the kitchen as I would prefer not to have unasked additions to my food. 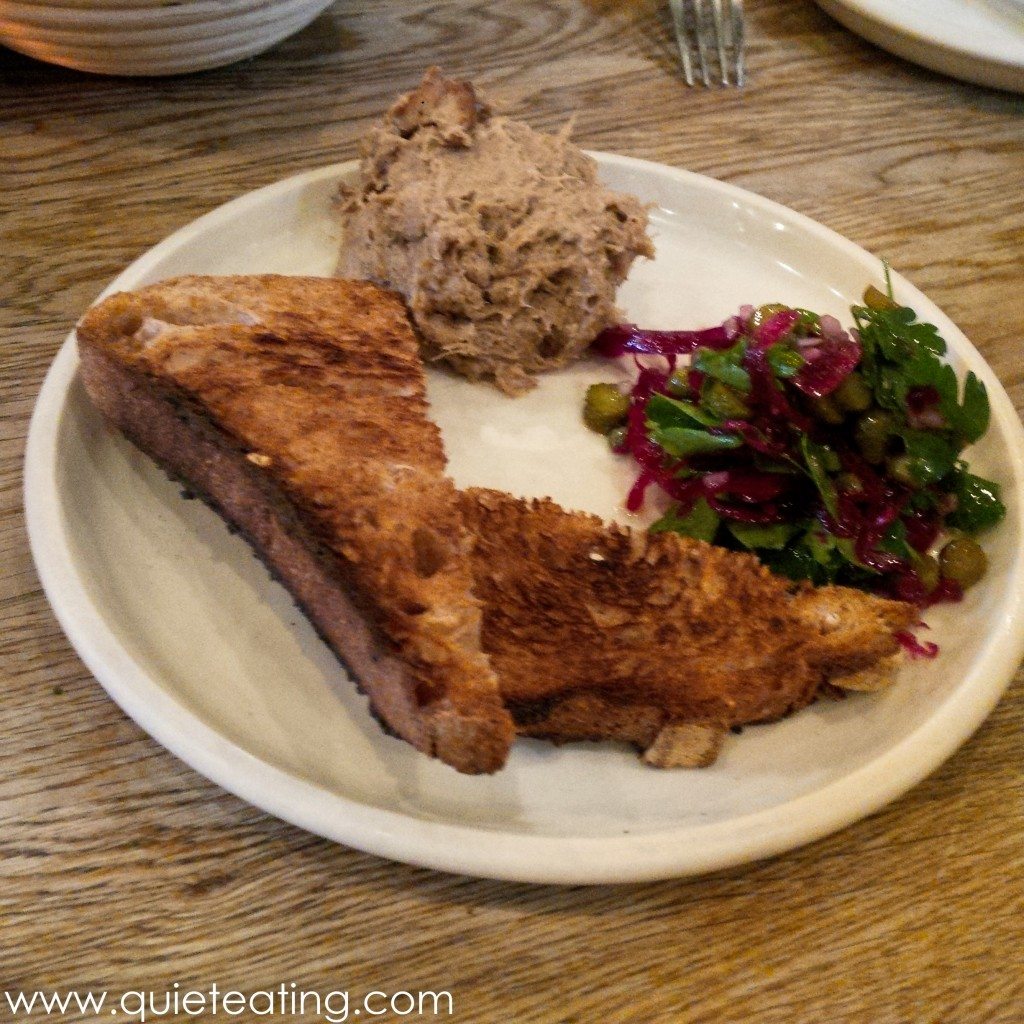 Pork rillettes with salad.  A mashed up collection of pork served with some sides proved to be interesting, although maybe a tad oversalted. 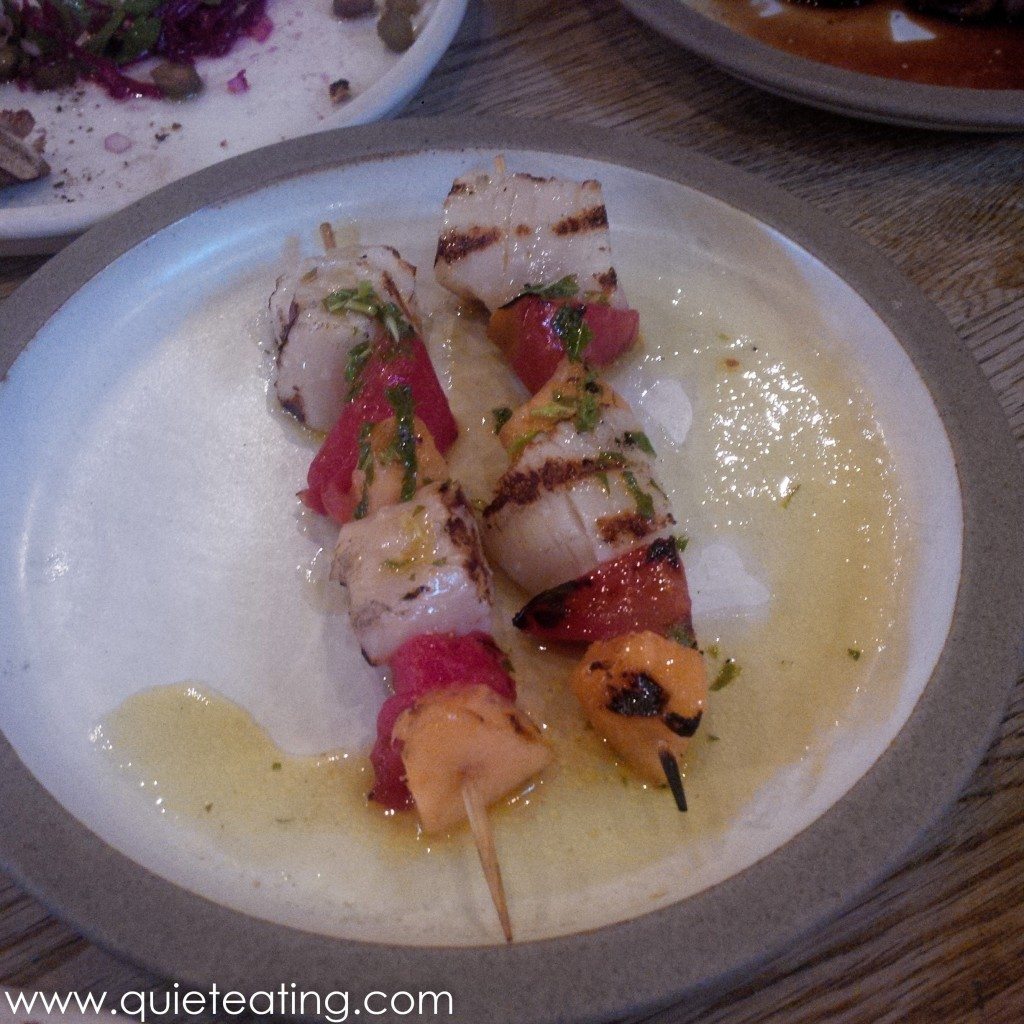 Scallops on skewers.  The scallops were a little overdone to my disappointment.  However, the sauce, which my fellow diners and I tried at length to identify the constituent elements of, had a strong taste of lemon.  I remarked that maybe they had failed to wash their plates correctly; either that or they ran out lemon and reached for the dishwasher bottle.  This dish was a bit of a miss. 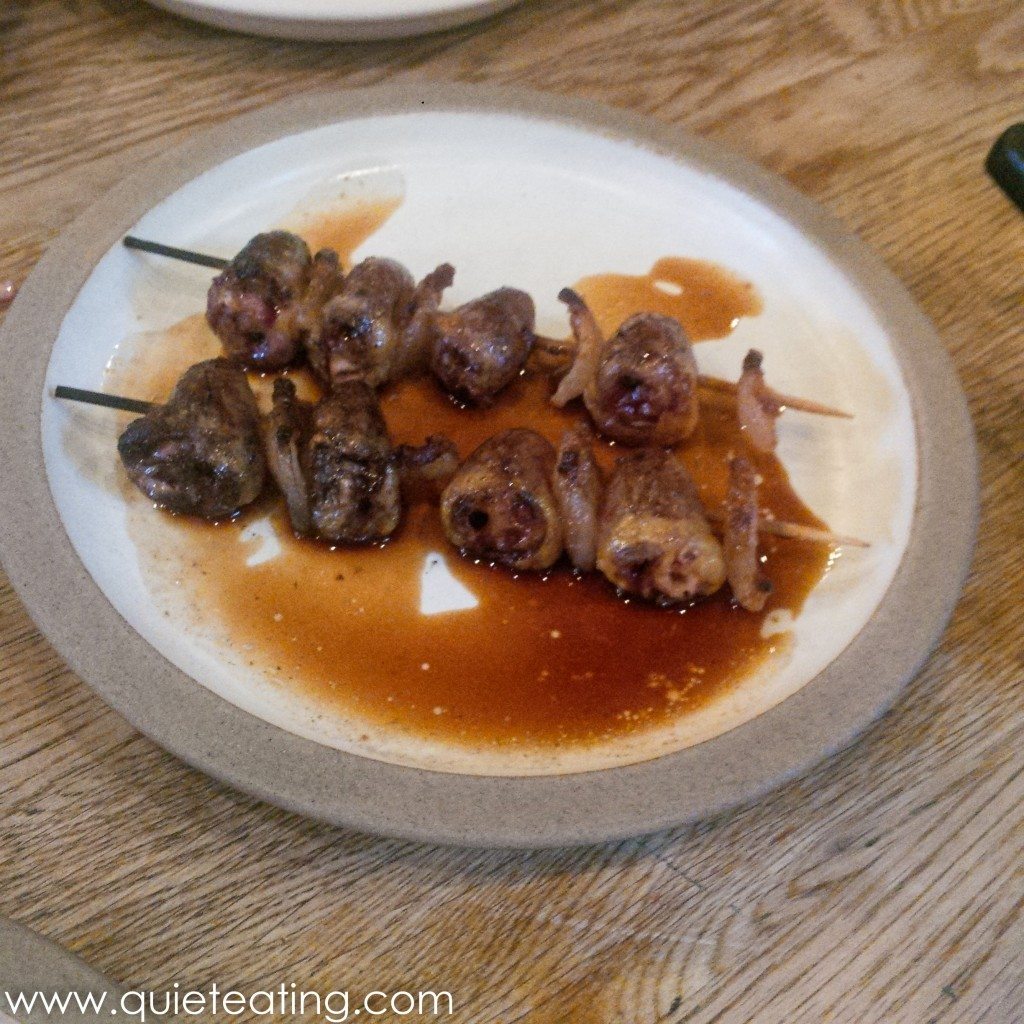 Chicken hearts with lardo.  I do love eating chicken hearts with their full flavour and meaty texture and these were not to disappoint.  I think this counts as the highlight of the meal for me.  It brought me back to days in Japan when I would gorge myself on yakitori, or chicken skewers, in particular those with chicken hearts. 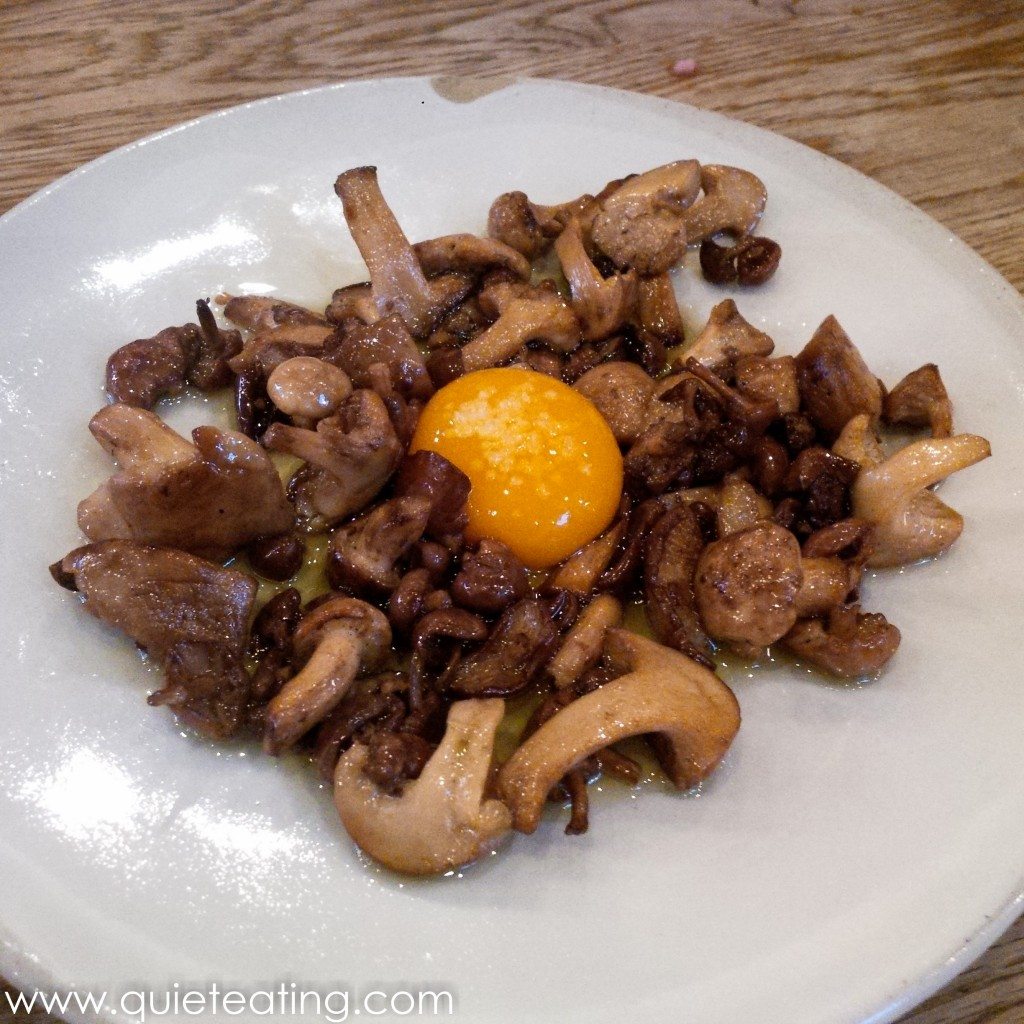 Mushrooms with egg yolk and salt.  It looks great, tastes good too but one of my fellow diners noted with concern the sheen of oil which you can see in this photo.  That’s not water! 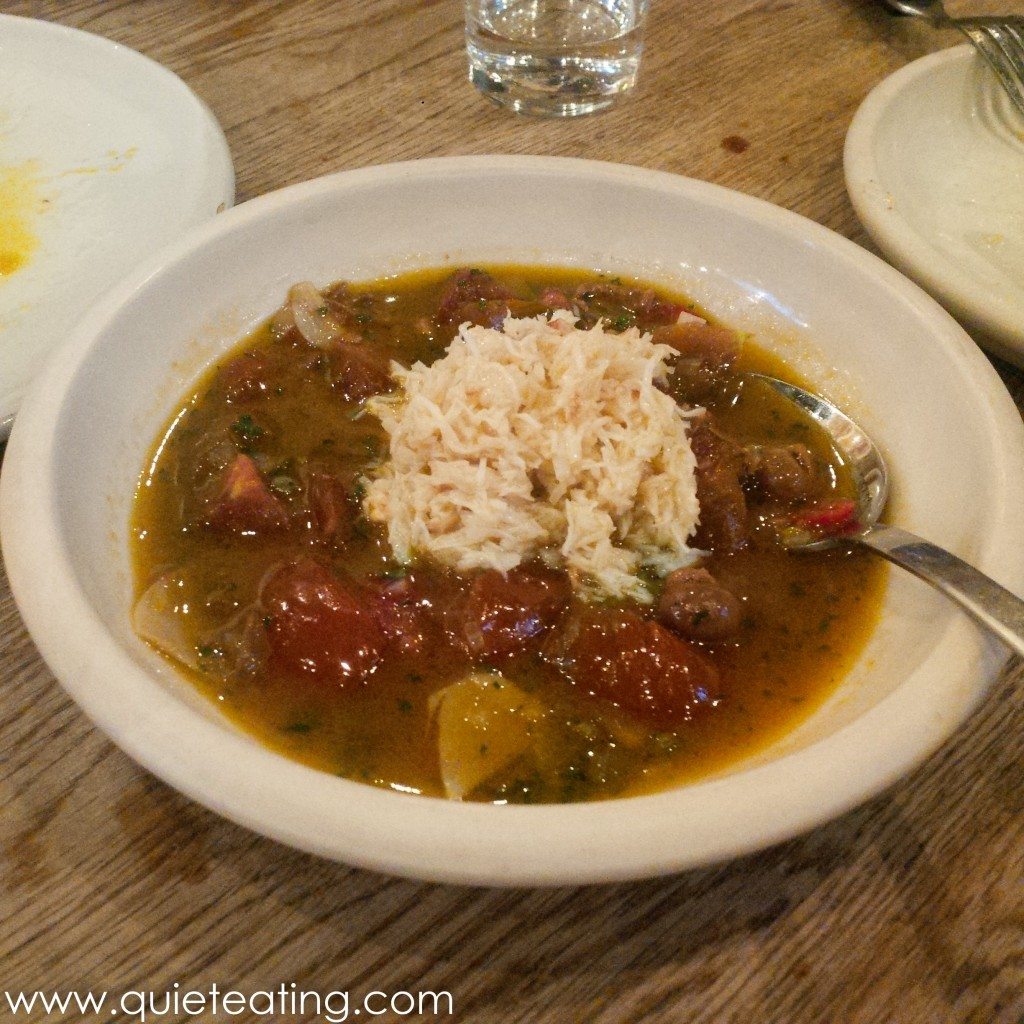 White crab and crazy water.  I don’t know what crazy water is too.  Maybe it’s a bit crazy to have vegetables in a dish….  This was alright and I appreciated that someone had fished out all the crab meat avoiding my doing the necessary messy chores.  There was one small wrinkle though.  There was still shell in the bits I ate.  Maybe I was just unlucky but it left me with a bit of an interesting dining experience as I hunted around for more “surprises”. 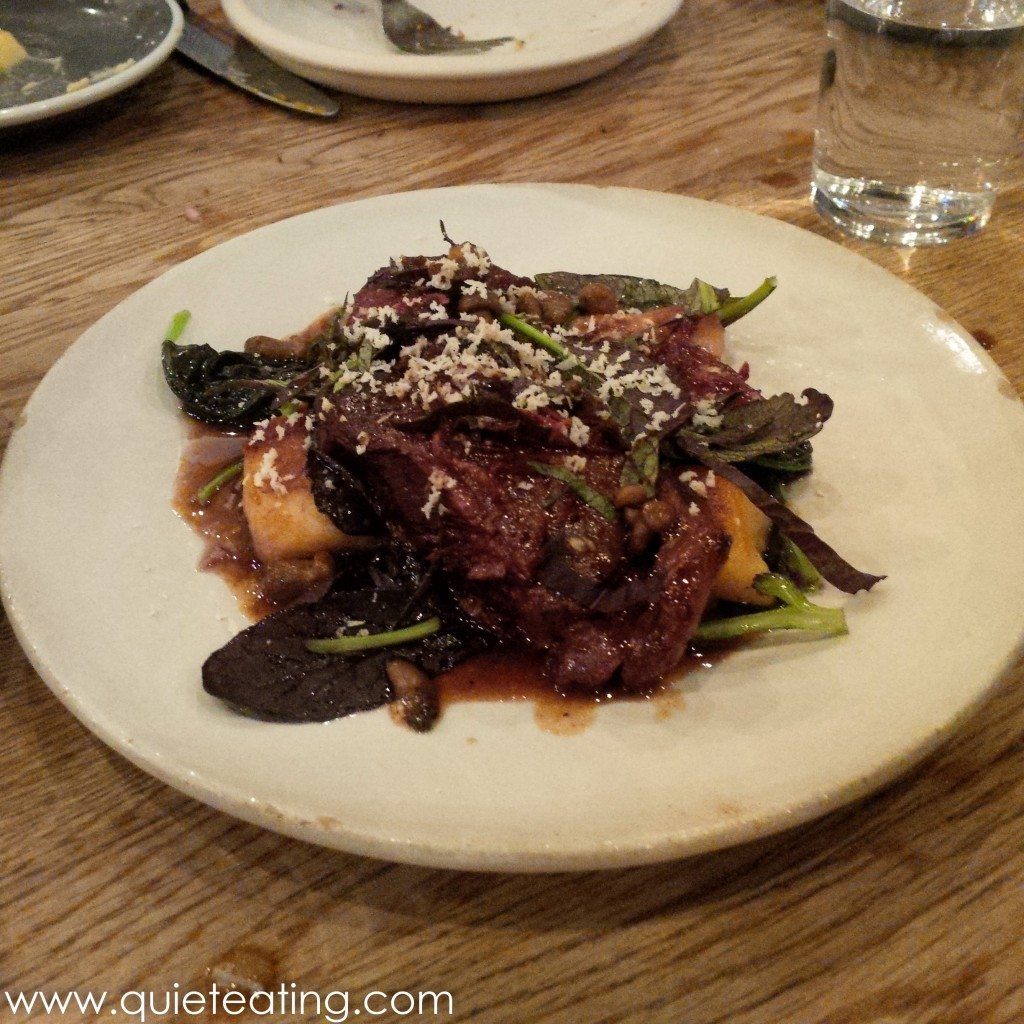 Ox cheek with potatoes.  I think this was easily the best dish of the night.  The ox cheek was flaky and braised in a delicious sauce.  If there is a reason to go to Elliot’s, this is it.  It might be enough to overcome the surly staff.

When we asked for the bill, I think the head waiter was a bit concerned about what we would say.  I admit that I was waiting eagerly for him to ask how the food was so I could give him my honest feedback but he wisely decided to hold back any queries.  When he was about to leave, I couldn’t hold myself back and asked “aren’t you going to ask me how the food was?”  My fellow diners then sniggered into their napkins at the show.  I admit that I was in a foul mood at this stage as Elliot’s food had unfortunately taken a turn for the worse during the two year interlude since my last visit.  The head waiter was quite apologetic but it was not enough to save this restaurant from sinking.  When combined with surly serving staff although all the elements for a perfect storm were not in place I was still subject to a mild drowning.  Maybe they just need to get chuck some ballast overboard (some staff maybe) to avoid capsizing.

Dinner (2 courses) was GBP 18 per person excluding service and drinks.