I could begin as many other posts I have read seem to do – by talking about the location, the premise and the décor of the restaurant.  Instead, I will start with a more intellectual introduction to The Portman.  When I initially heard the word “Portman” my mind turned to thoughts of the sea.  What was a Portman?  My educated guess was that it was maybe a man who tended ports?  I thought the restaurant must be heavy on maritime dishes in that case.  With my curiosity afire I searched the dictionary for the meaning.  To Portman is to make a sudden about face on an issue because of recently release information which contradicts a previous stance.  Rather apt in these times with politicians being pilloried by the release of the Panama Papers.

With such thoughts swirling around me, we arrived at our seat. 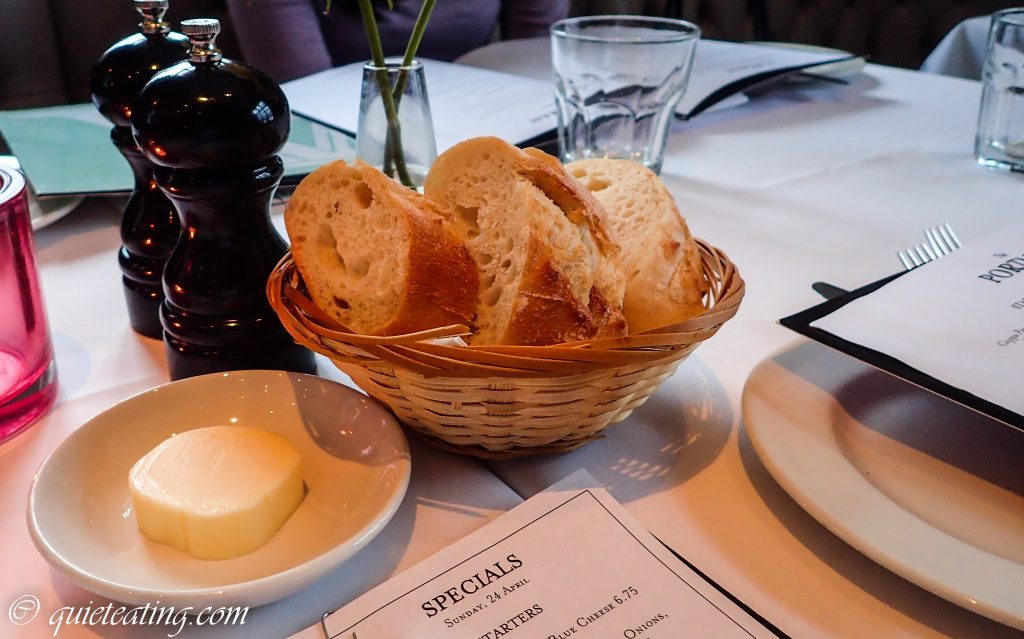 House bread.  Promptly, even before the arrival of the menus, warm bread with a chunk of butter materialized.  I was beginning to feel favourably disposed already. 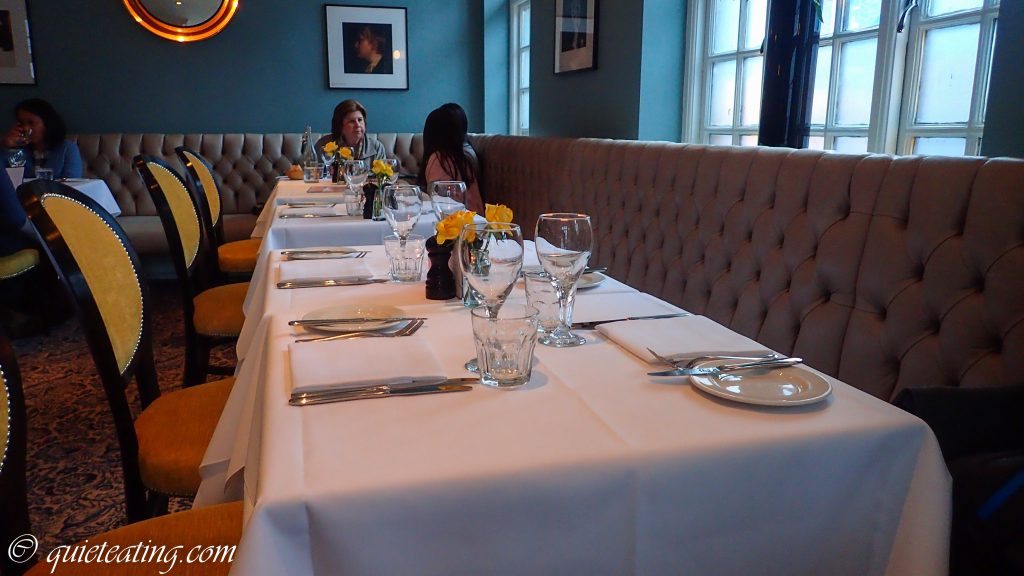 With comfy soft seating and plush chairs, white tablecloths and napkins as well as interesting flower arrangements (one of my fellow diners kept on remarking about the flowers until we threatened to make him eat them), it seemed like a relaxing way to have dinner at the end of the week.  After much deliberation, we decided on a wide spectrum of dishes to test the skill of the kitchen. 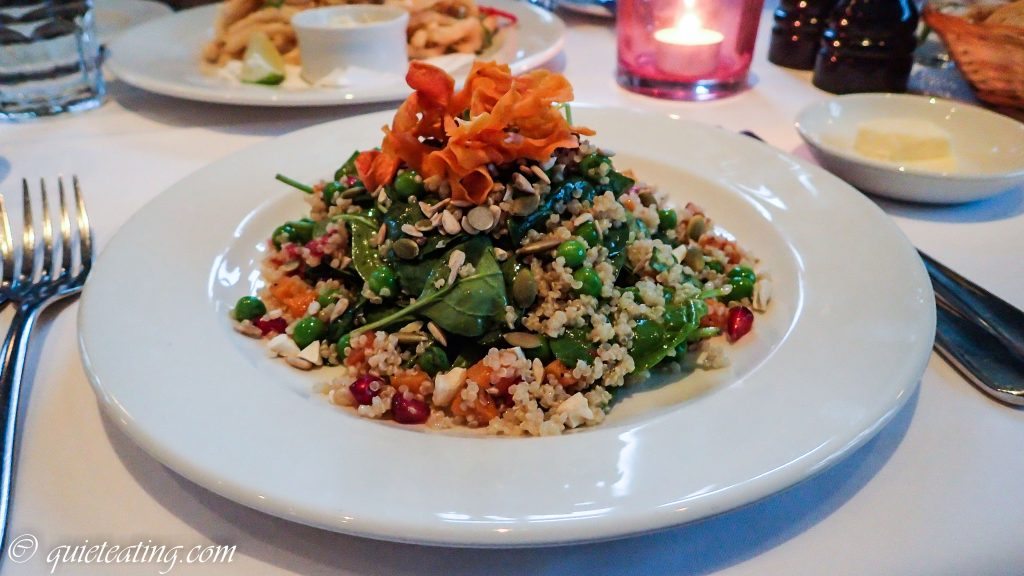 Quinoa, roasted butternut squash, baby spinach, peas, pomegranate, cashews and seeds.  As a starter, this healthy looking (and even more healthy tasting) salad appeased the more weight conscious of our diners.  That’s not me.  Instead, I waited eagerly for more flavourful treats. 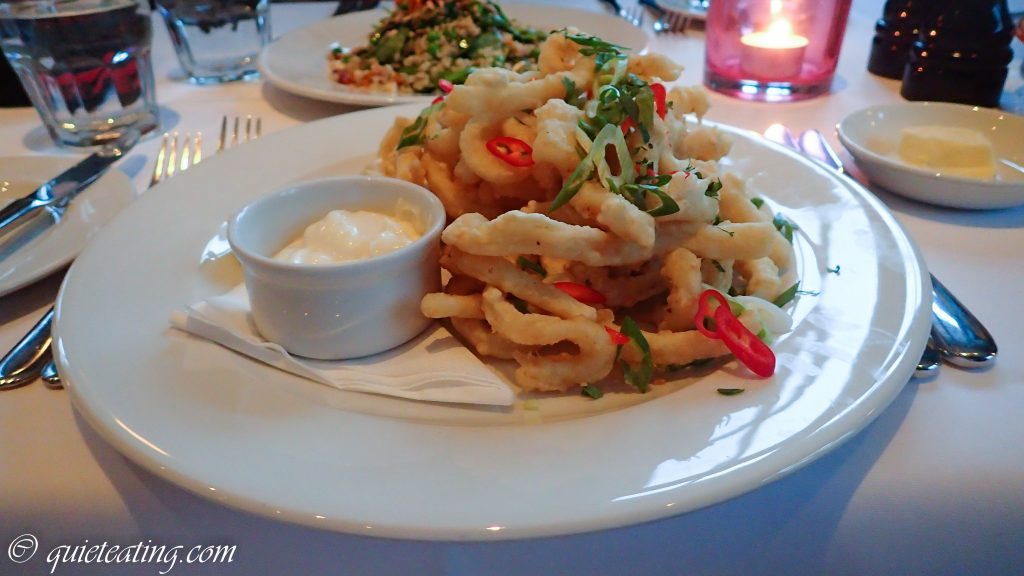 Deep fried squid.  I thought that my salvation was at hand.  Here, I cannot help but make comparisons to the salt and pepper squid found in Chinese restaurants as it seemed to have many of the ingredients that I would expect, except for the liberal sprinkling of fried garlic which I do love.  These were ok but a bit tasteless in comparison to those tasty oriental slivers I love. 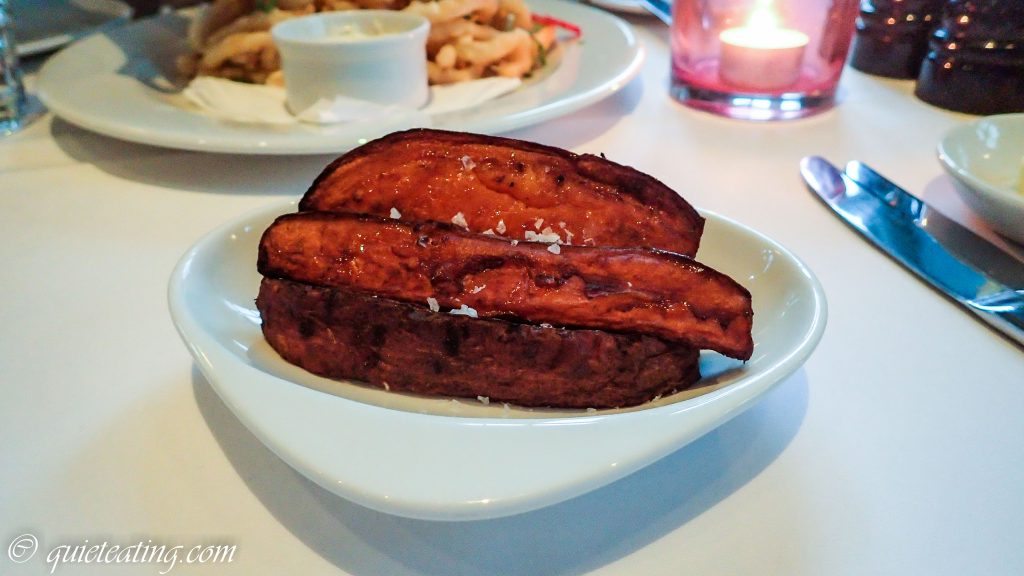 Sweet potato wedges.  Oddly, our potato wedges appeared with the starters.  These sat forlornly waiting for the mains as we thought it might better complement meatier dishes.  Although, skipping to the chase, these were alright but not stand out. 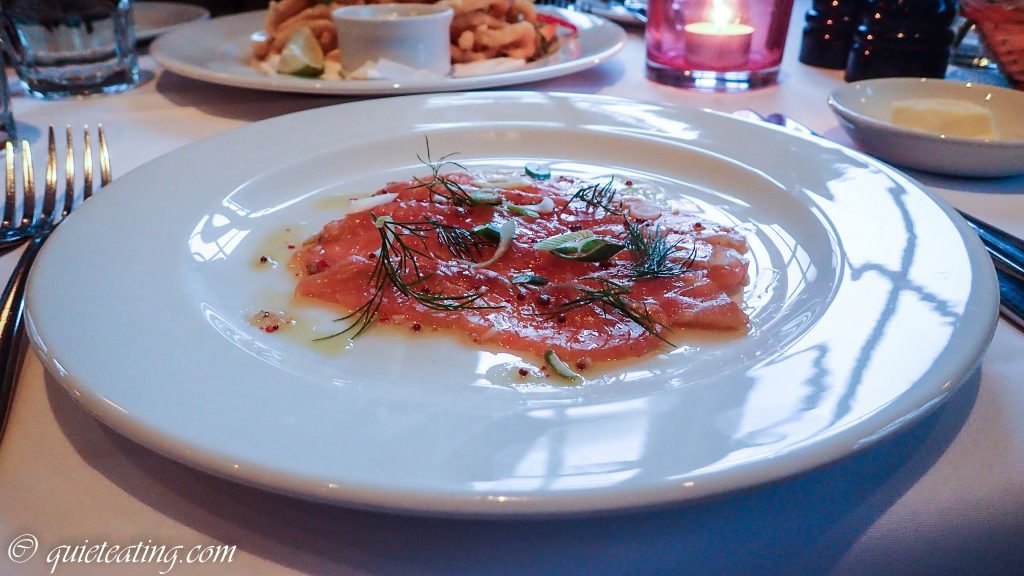 Ceviche of salmon, dill and spring onions.  The salmon was fresh and light.  A little too light perhaps, I could have done with a bit more flesh.  The starters were not bad although none were outstanding.  Although that may  have been because I need to learn to eat and appreciate more greens. 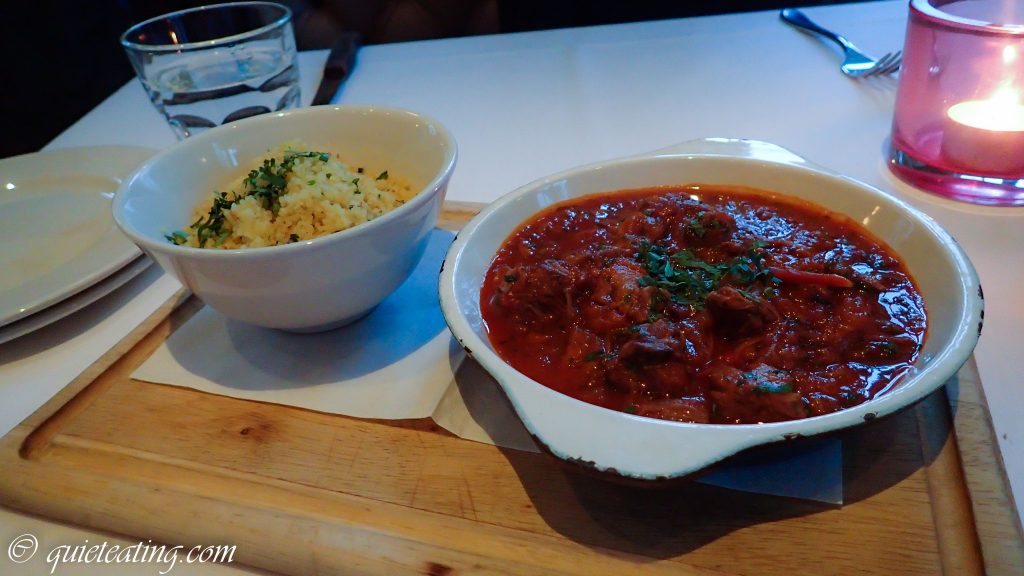 Kid goat tagine with saffron couscous.  The first of the mains.  The goat was tender, the sauce full of deep tomato flavour and the couscous having a delicate hint of saffron.  This was the stand out dish of the meal.  I could have licked the bowl clean but my dining companions restrained me as they didn’t want the group to appear uncouth by association. 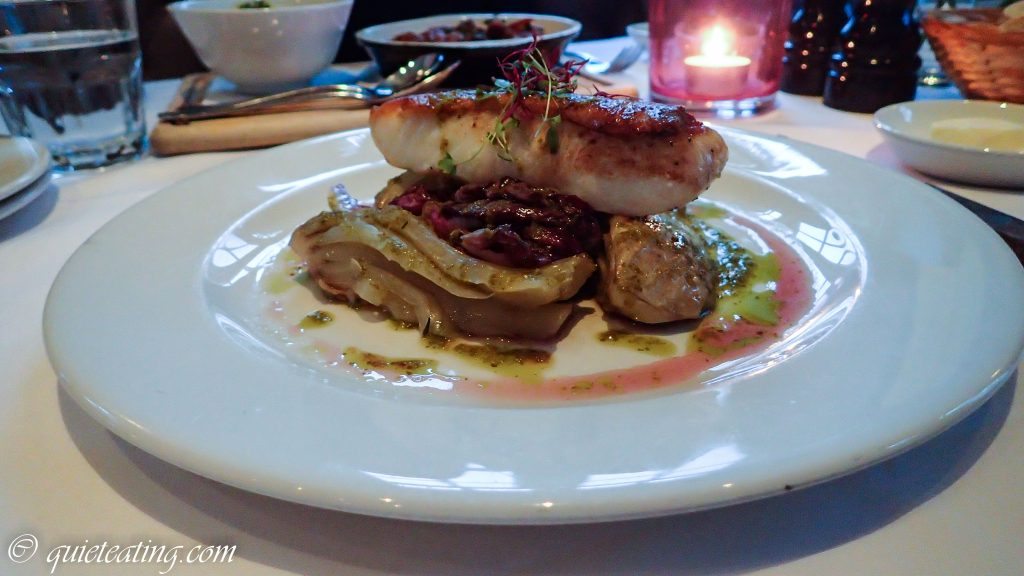 Fillet of wild halibut, braised fennel, radicchio and lime coriander sauce.  So, this is where we got to start trying the fish specialties.  The halibut managed to avoid overzealous cooking and remained intact and moist.  Unlike bad examples of nuked fish I have known, where it all falls apart.  The vegetables accompaniments were chosen well, light flavours which avoid overpowering the delicate flavour of the fish. 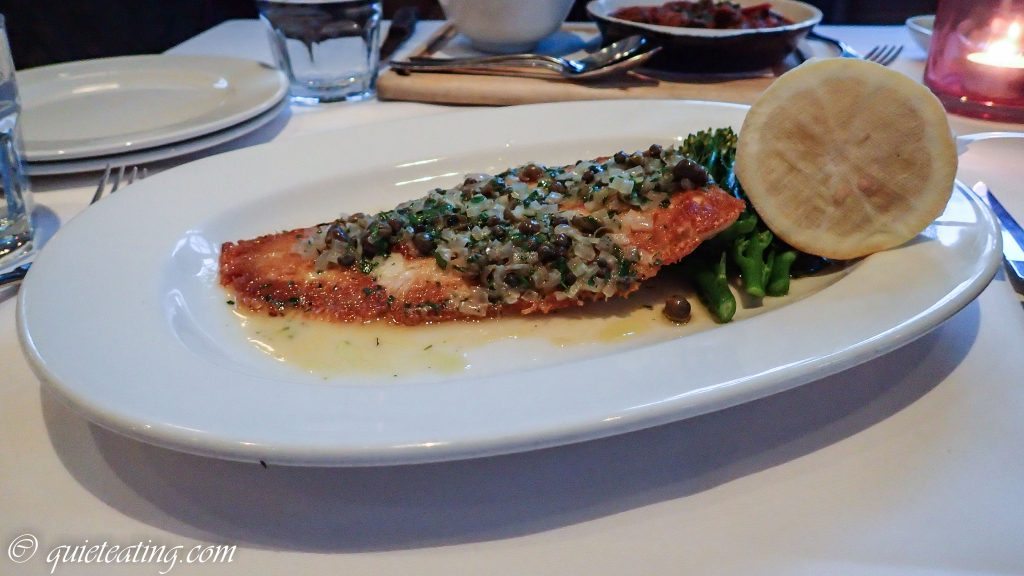 Pan fried baby Dover sole, tenderstem broccoli and sauce meuniere.  The second fish dish was excellent.  The Dover sole was crunchy, flavourful and the topping added a little tangy note.  Although if fault was to be found, it was slightly too oily, maybe the fault of the meuniere sauce, but not fatally so to any extent. 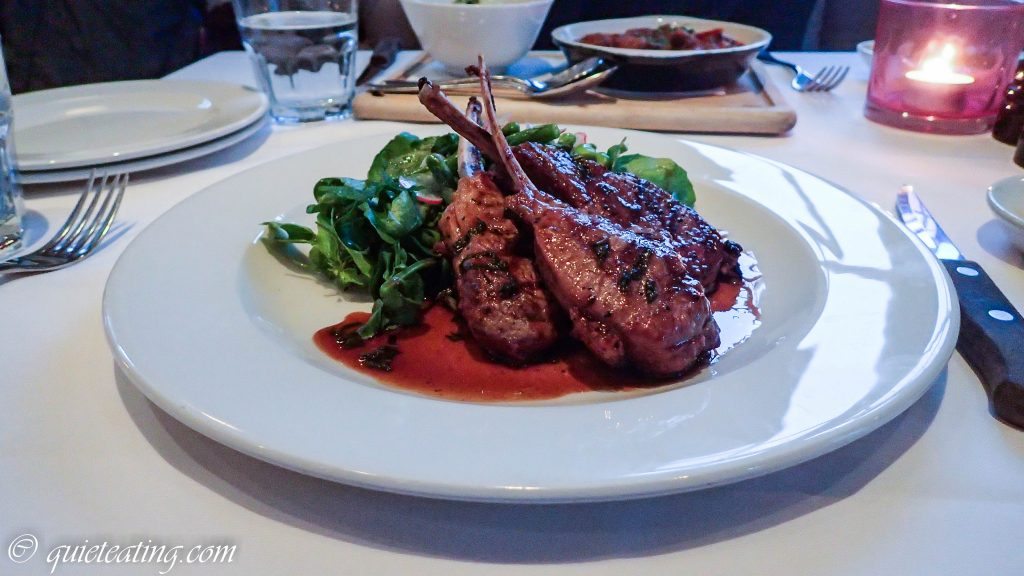 Grilled new season lamb cutlets, watercress, broad beans, relish and mixed salad.  With lambing season on us, we thought it prudent to sample this dish.  Fresh off the farm, these cutlets were good and again accompanied by healthy greens.  I guess they had to make the lamb feel at home among the foliage.  Mains were very good although I actually enjoyed the meat dishes more than the fish, strangely enough.  You would think with a name like The Portman… 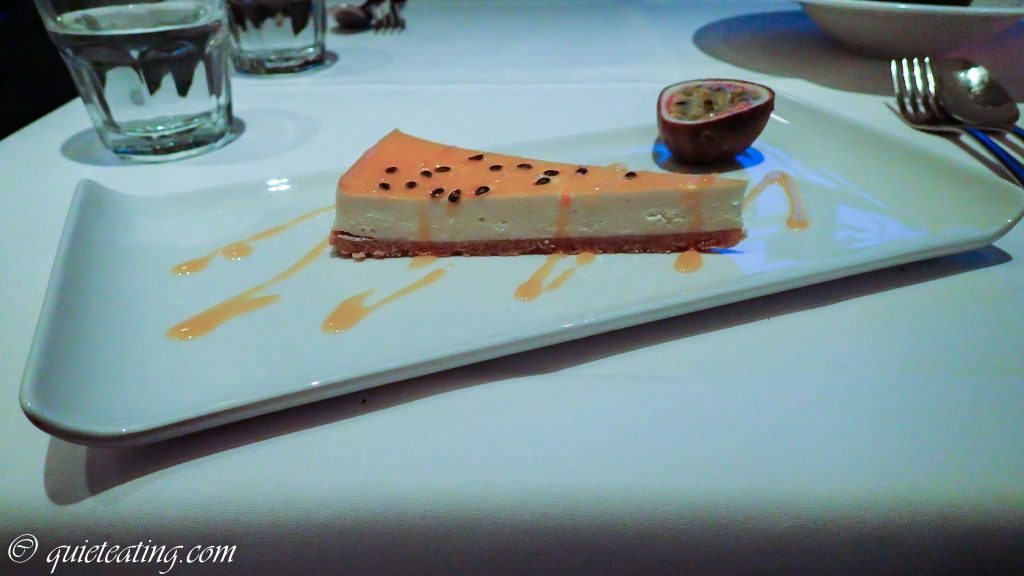 Passion fruit and white chocolate cheesecake.  The tangy passion fruit with sweet chocolate was ok.  It was actually our least favourite of the desserts.  It was just a bit ordinary, not that it was bad. 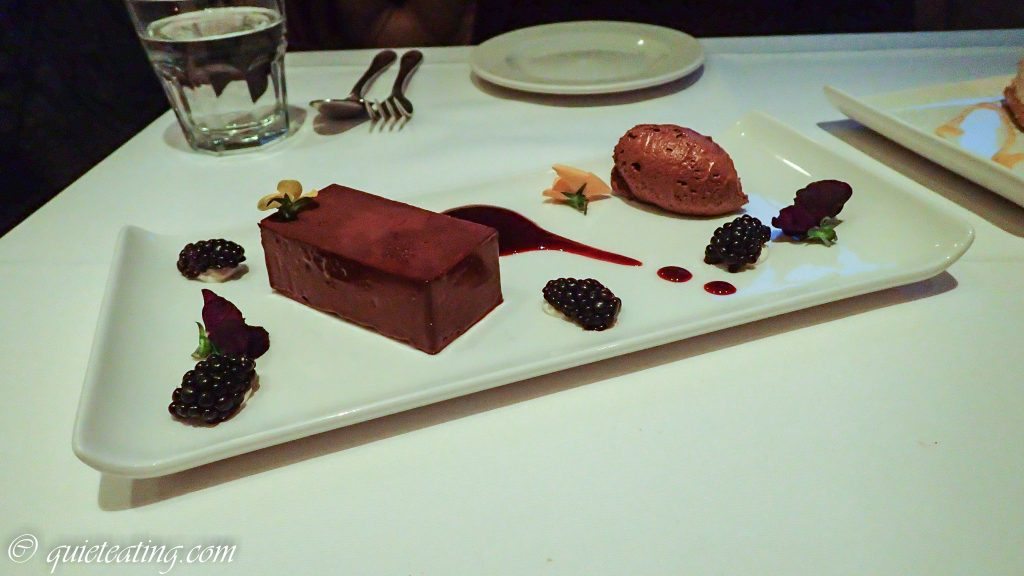 Chocolate ganache, blackberries and chocolate mousse.  The block on the left is exactly what it looks like.  A huge block of lovely smooth chocolate with of course more chocolate mousse.  This cocoa delight was delightful.  I’m not being sarcastic here as I actually enjoyed it very much.  I would talk more about it but it was overshadowed by the below. 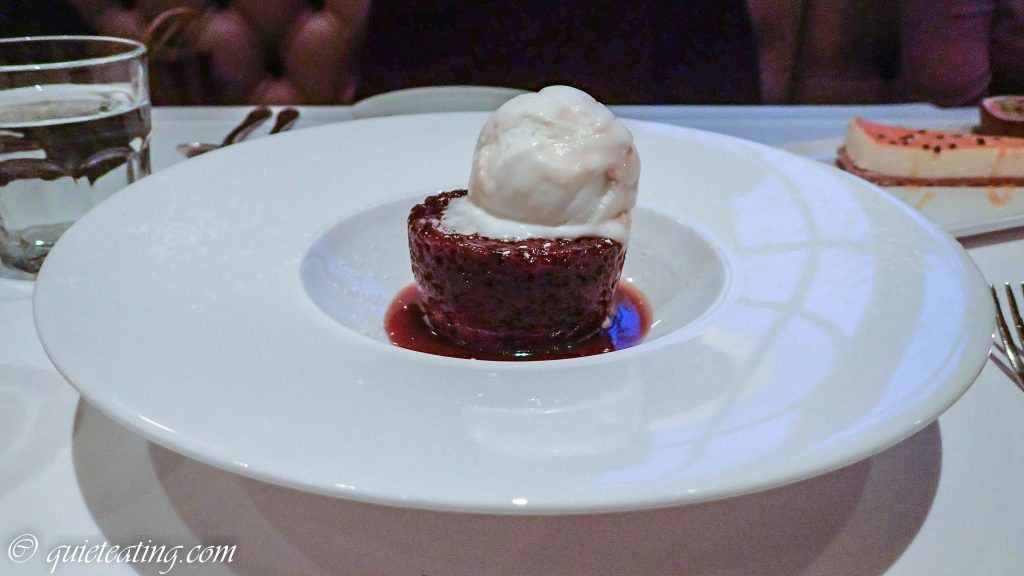 Sticky toffee pudding with vanilla ice cream.  This was the standout dish of the day.  I have never had a sticky toffee pudding so good.  It tasted as though the sponge had sat for eons soaking in the rich toffee.  Topped off with the ice cream, it almost made me swoon with its rich taste.  Definitely to be recommended.

Against the background of the good food, I have to commend the excellent service provided by our waitress.  Faultlessly recommending dishes, keeping our glasses topped up and reading our hungry and cranky diner’s mind to rush out the bread, she is to be commended.  Combined with the good food, if you are around the area, this place is definitely worth pitching your anchor at.

We were invited to review.  Estimated costs for dinner (3 courses) was GBP35 excluding drinks and service.