As far as restaurant names go, I take my hat off to SuperStar BBQ for sheer aplomb.  Naming your establishment after the diva inside all of us (or perhaps that is just me) was more than enough to pique my curiosity.  Maybe after lunch, I would at least feel like a rock star too. 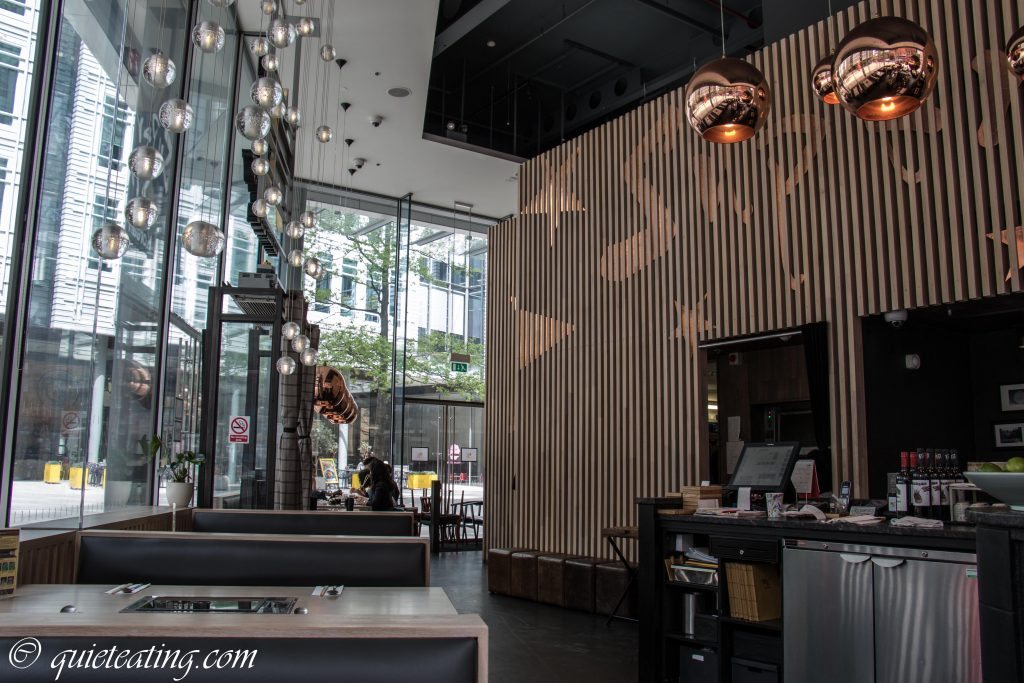 Subtle studio lighting (note the stars and words on the walls) reminded you of where you were.  Although I had expected a dingy basement in line with previous Korean BBQ locales I had frequented, I was surprised to see a bright and high ceilinged dining area.  By the end, I was soon to find that the aesthetics also served another very important function.  I didn’t leave dinner smelling like I had just come out of the smoker. 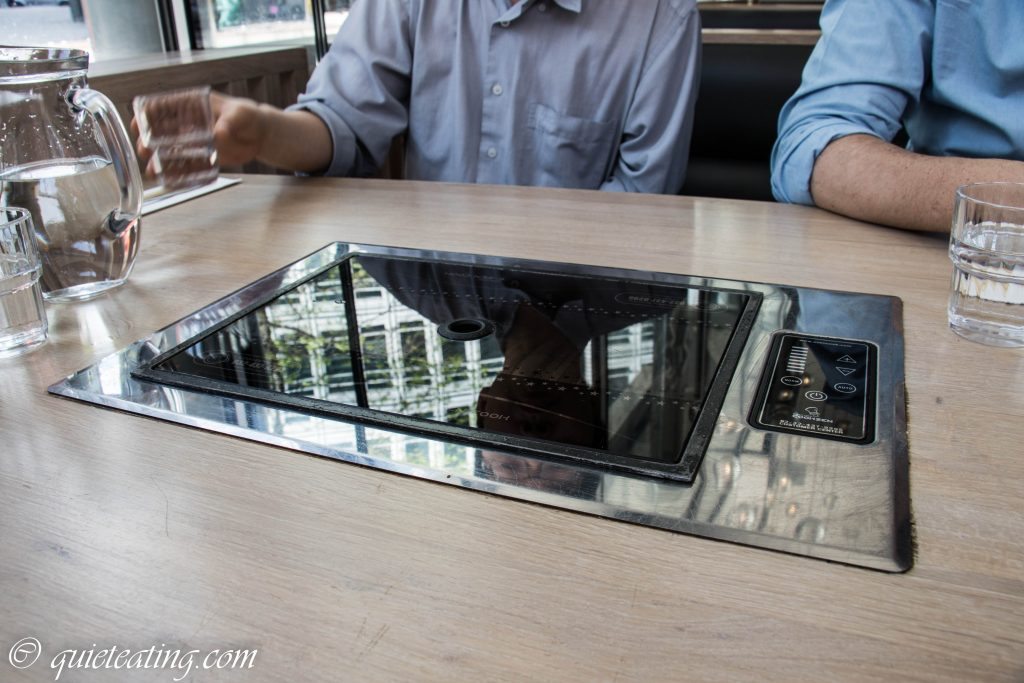 Preparing for the meal, we marshaled ourselves. 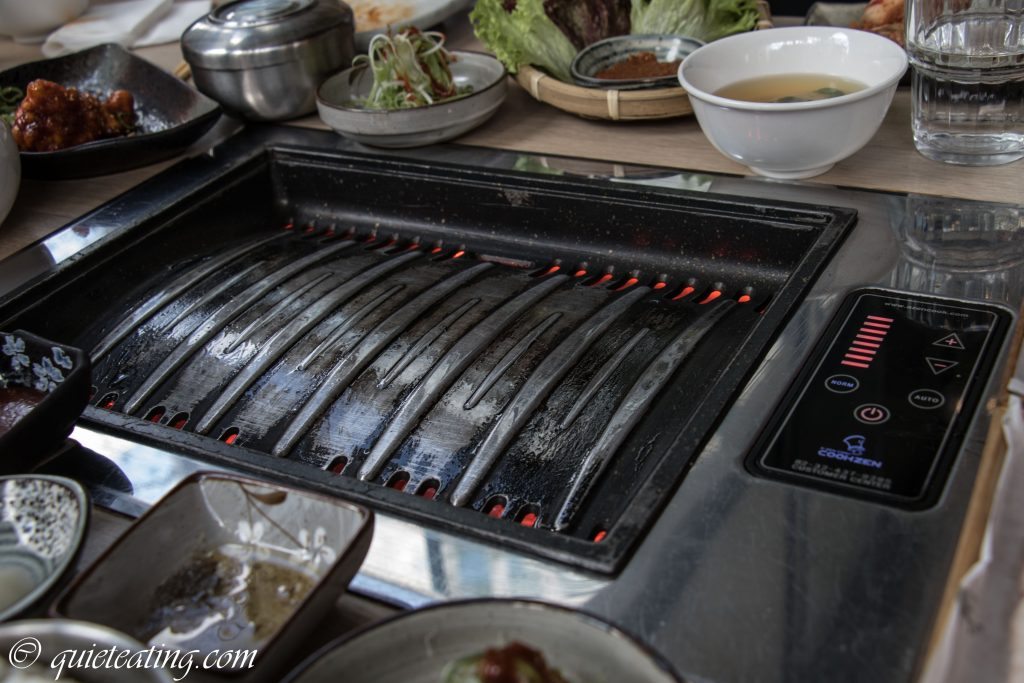 And readied the troops.  Yet, first, a couple of uncooked starters to sate our hunger. 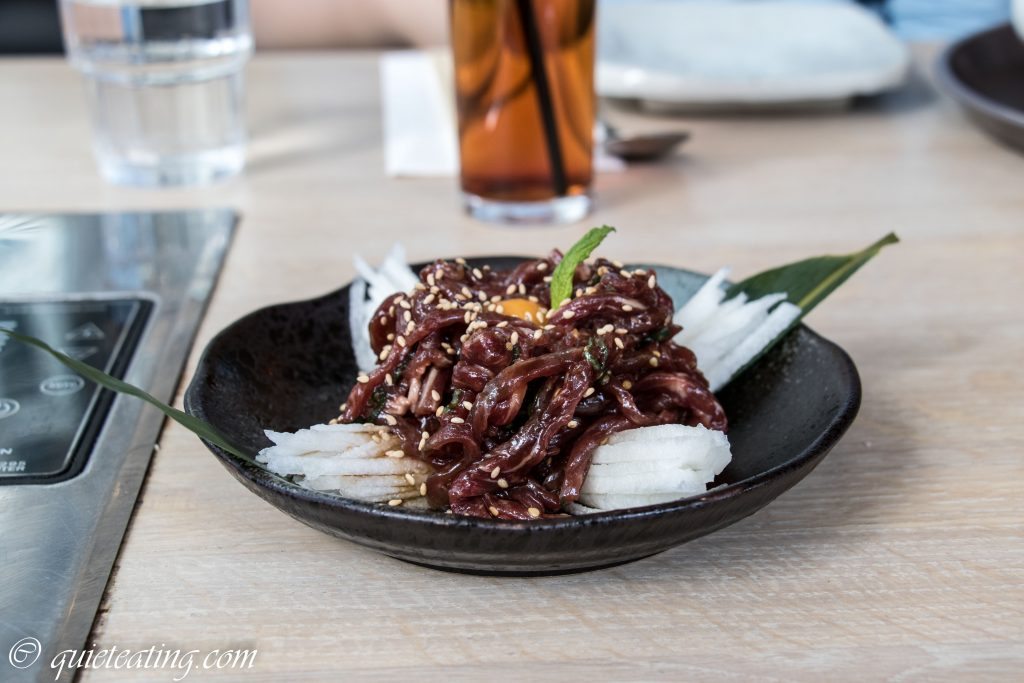 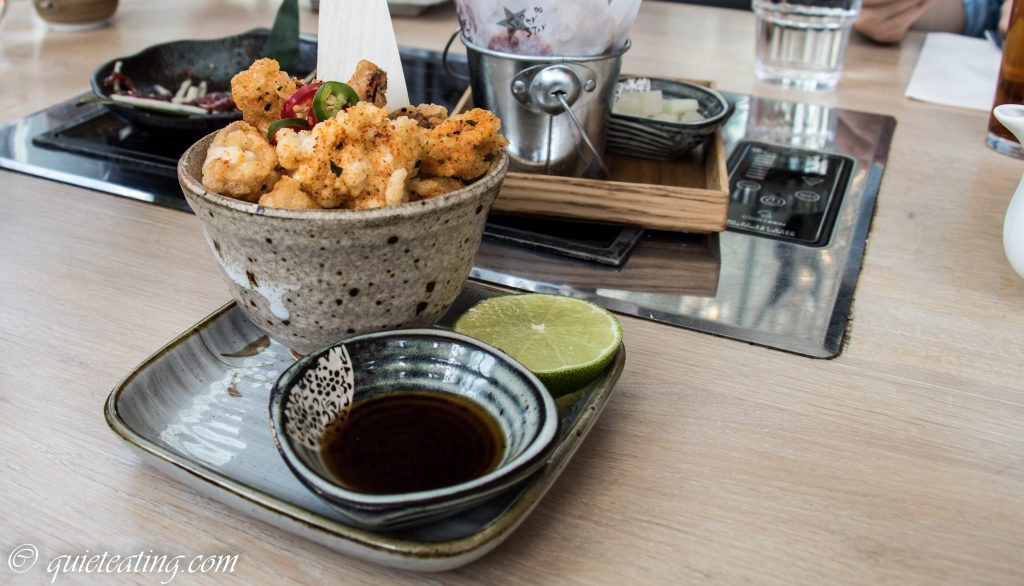 Chilli squid.  Unfortunately, this didn’t quite have that much flavour.  The top level of the squid was nice and crispy but the layers underneath (like, most of the dish) were sadly a bit soggy by the time we got there.  Crispy squid dipped in lime and soya sauce would be great.  Not what we got towards the bottom.  Not fitting for a rock star. 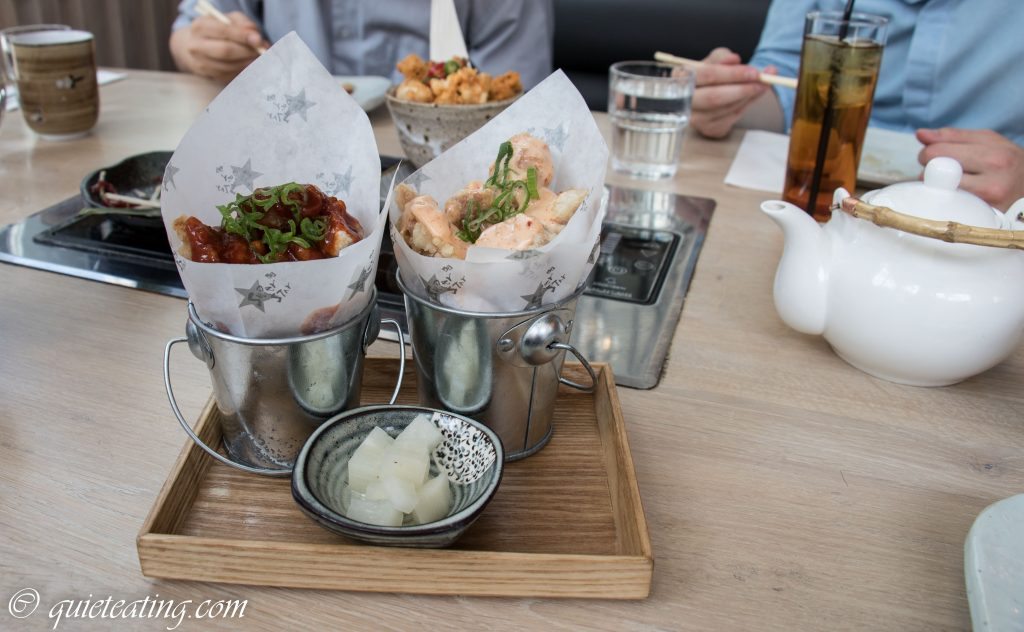 KFC.  Korean style fried chicken with sweet chilli and kimchi mayo.  The KFC fared better.  The sauces were good and the chicken crisp and flavourful.  Well, at least the top crispy parts.  Although I am not usually one to take issue with the dining implements, unless it is recycling used packaging for beer cartons, the buckets and rice paper here helped to avoid most of the issue with the squid, i.e. things becoming a bit too mushy, so giving us a welcome little treat. 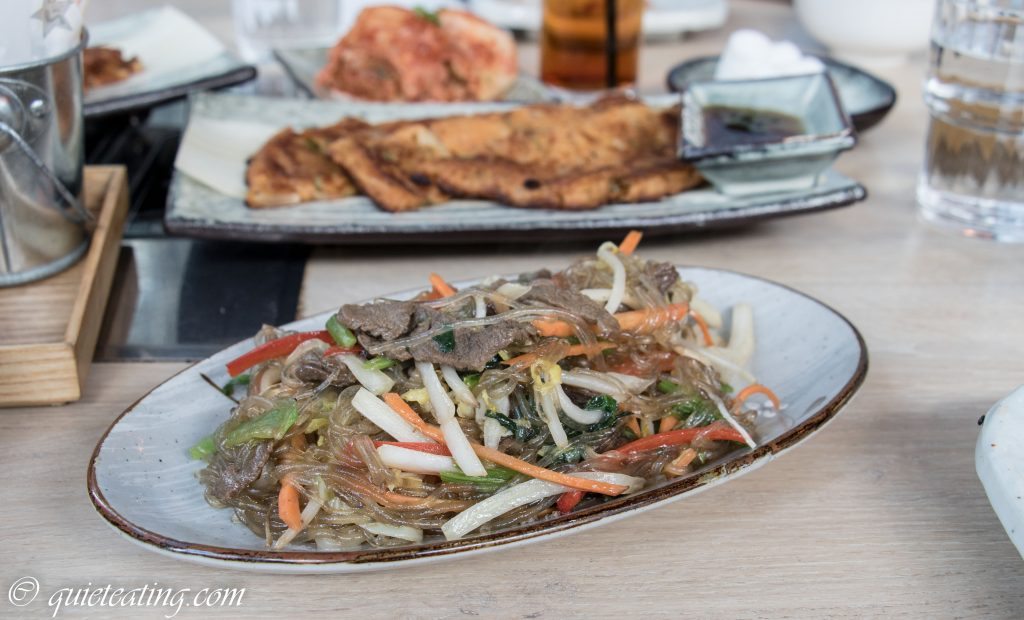 Jap chae.  Glass noodles with vegetables, sesame and soy sauce and beef.  A typical Korean introductory dish which was not bad.  If you haven’t tried this before, this is a great introduction to staple Korean food. 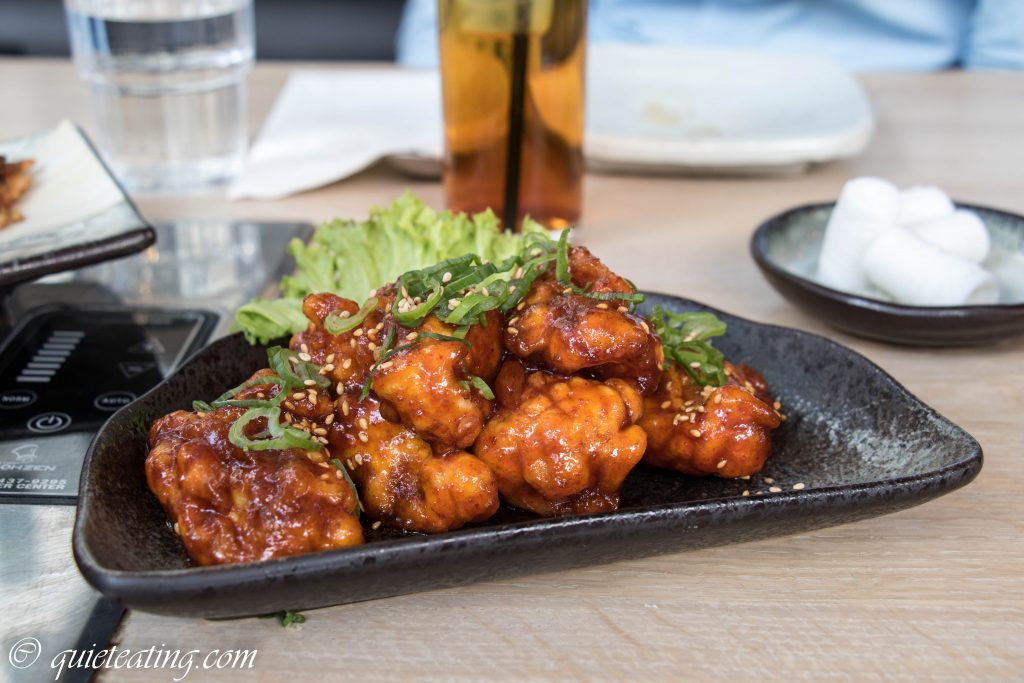 Korean style spicy wings.  A Korean take on the ubiquitous sweet and sour Chinese masses around the corner in Chinatown, this was better. Chicken seems to go better than pork in this sauce combination. 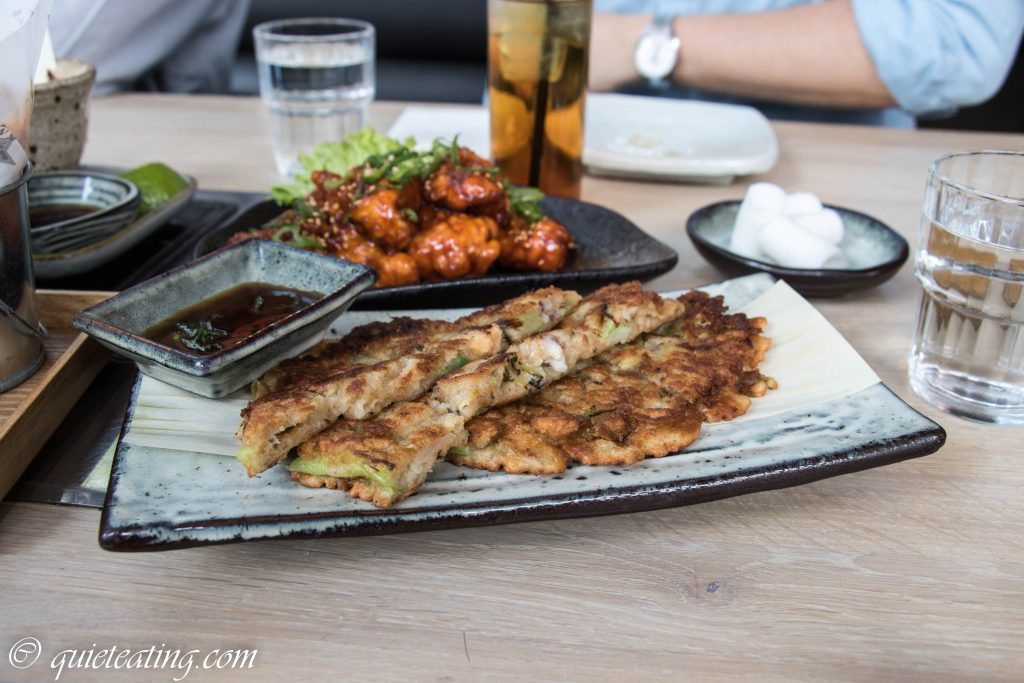 Pa jeon.  Seafood pancake with spring onion and mixed seafood.  This was nice although it could do with a tad more frying. 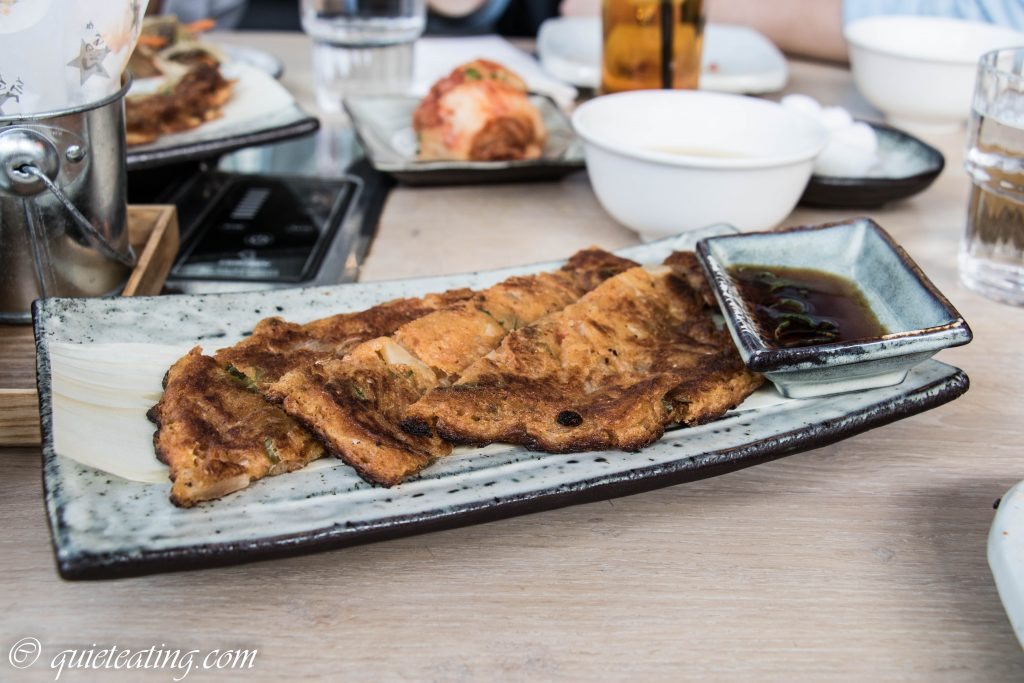 Kimchi jeon.  Pan fried kimchi pancake.  This, in comparison, was done excellently with a crisp exterior and a crunchy and delicious interior.  A definite stand out dish.  If I was a rock star, this is what I would have wanted everyday for breakfast.  Might help add some spice to my singing. 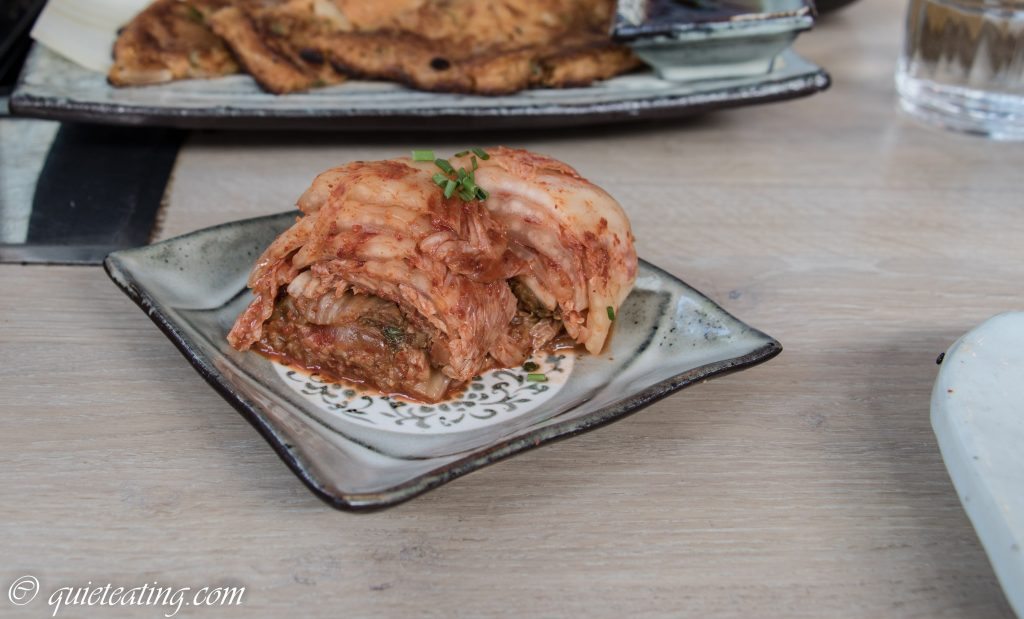 Kimchi.  Not bad, although it paled in comparison to the kimchi pancake that preceeded it.  Doomed to obscurity because of its outstanding brethren.  It would have otherwise been something that we would remember. 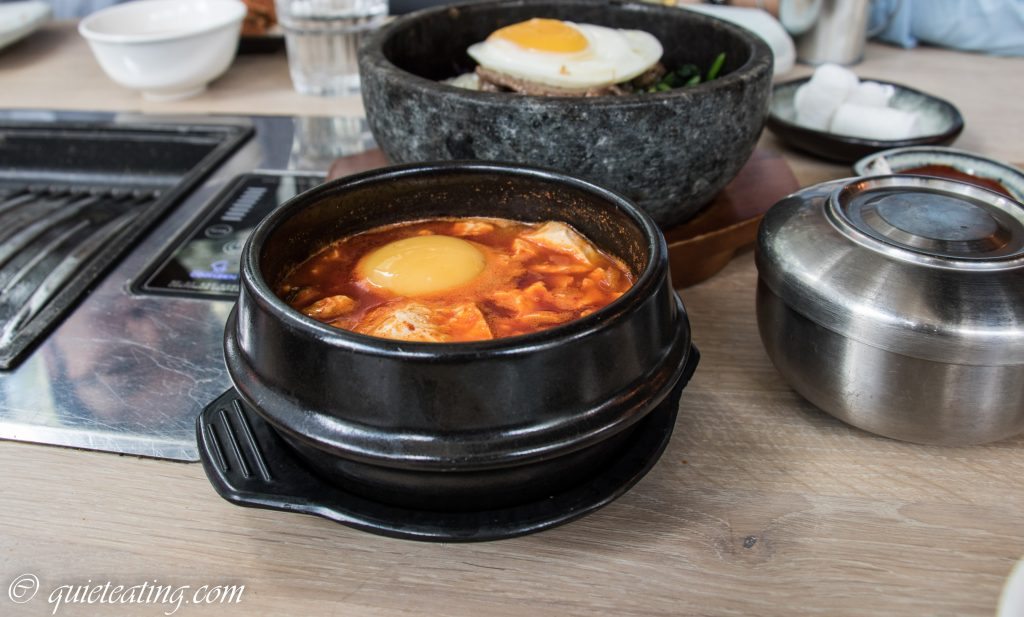 Soon tofu.  This dish turned heads.  In the right way.  If someone famous had graced our table and slid into our booth, I would think the tofu would win the competition for attention.  This dish alone is a reason to return.  Smooth and tasty, spicy and full bodied, this filled our hearts with warmth. 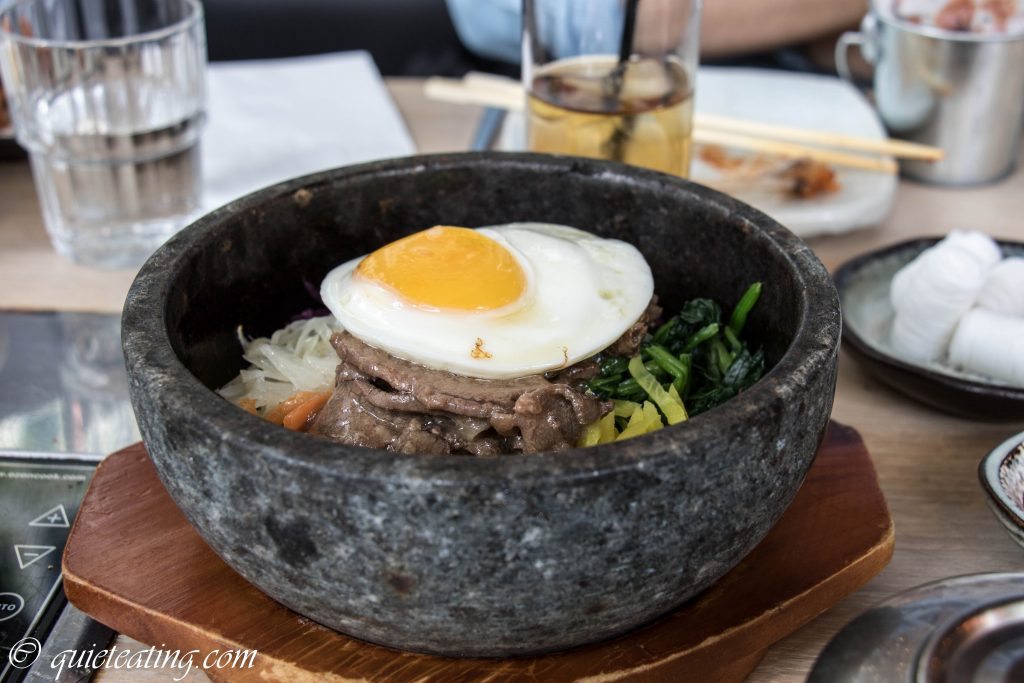 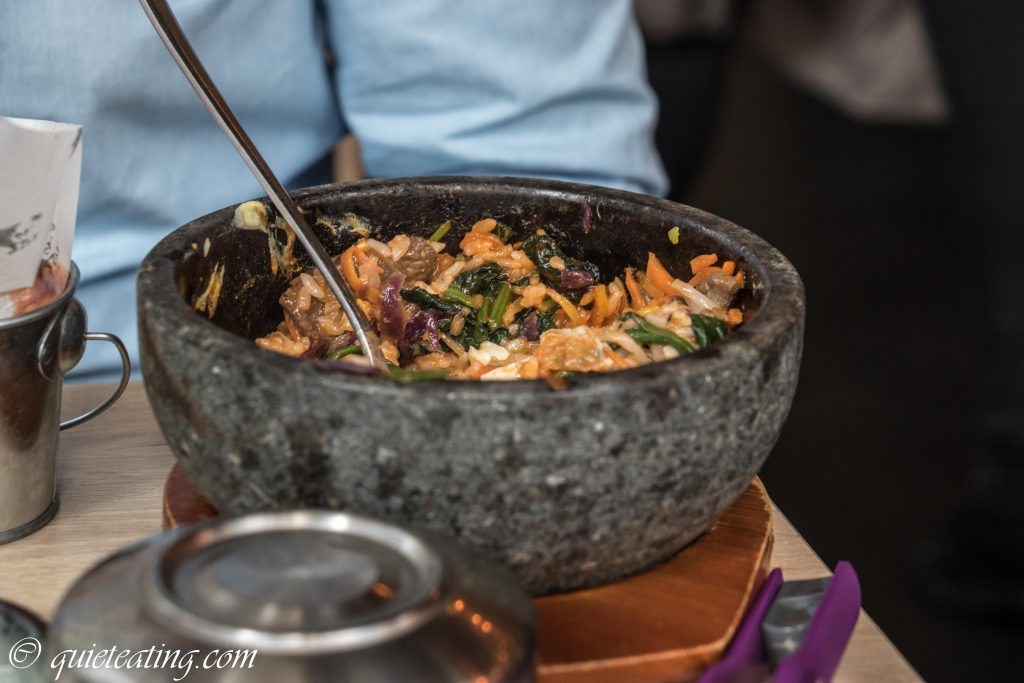 All mixed up.  The staple bibimbap was rather average.  It just lacked the sizzle and crack of a burning hot stone bowl.  Seemed that they had gone for the safer option here of lukewarm, probably in some health and safety attempt to save the skin of the diners.  Although, if you are putting a BBQ in the middle of the table, a hot stone bowl would be the least of your worries.  It wasn’t bad, just average because of the lack of heat, literally. 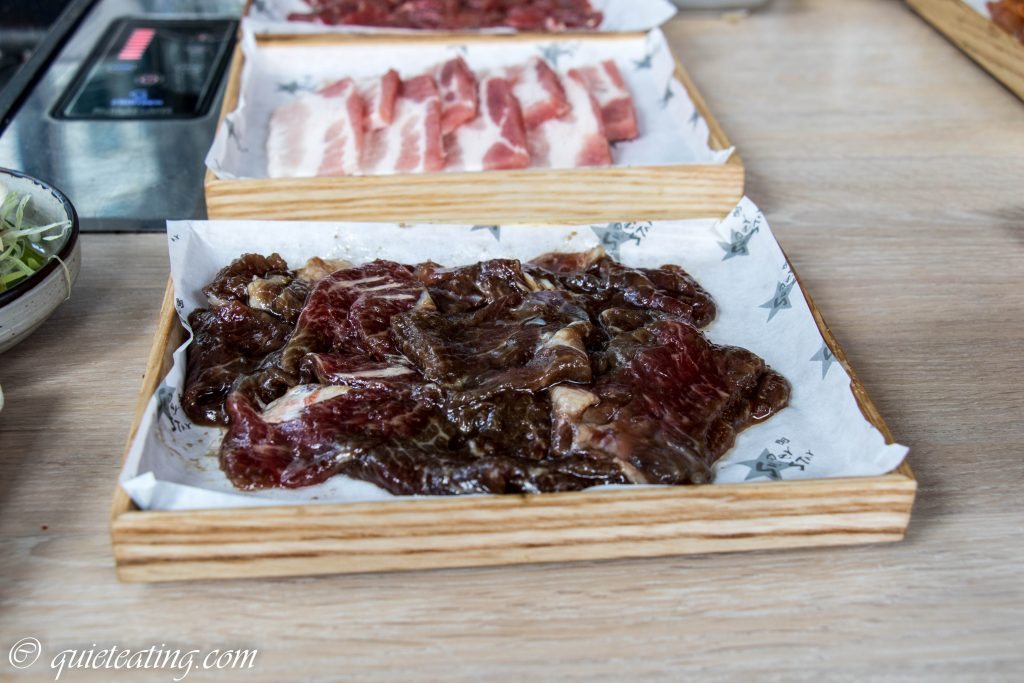 Sesame and garlic sirloin.  Now on to the BBQ.  I was salivating already.  Some cuts of beef to fry on the stove and lift some of us from boredom.  You know, some people, they do just love to play with fire…  At least here they could put their pyrotechnic skills to good use by cooking our meat.  It was done so well that I wasn’t able to get a cooked photo as it was quickly gobbled up.  It was all just gone.  A testament to the taste and/or cooking skill. 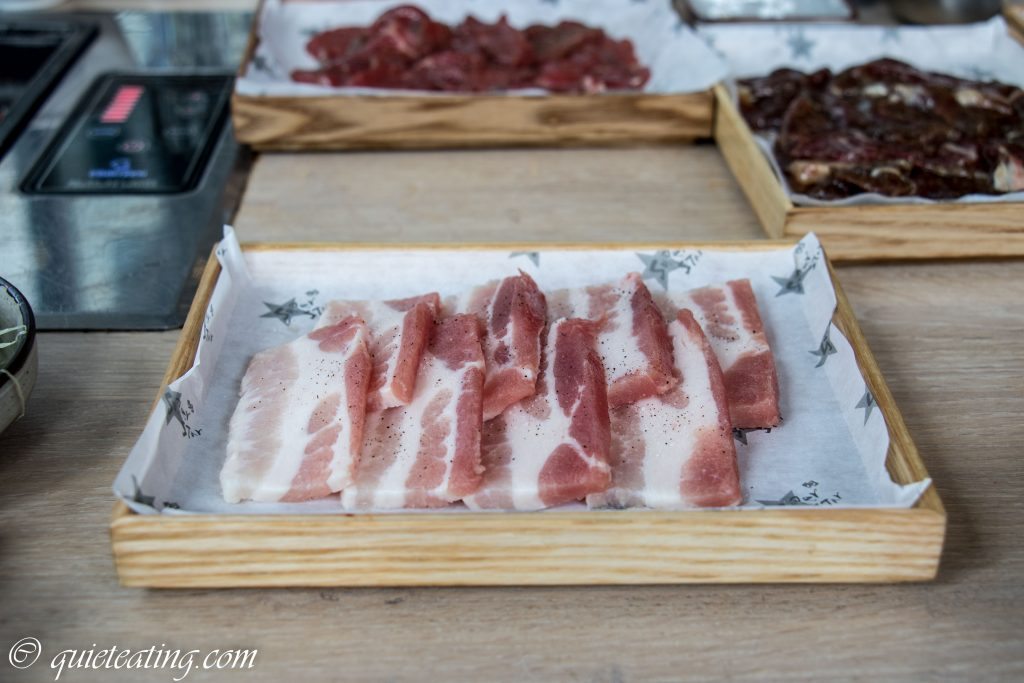 Belly pork.  Rectangles of tastiness (someone complained that they were full of fat but what DID you expect from pork belly?).  I was denied photos again as they quickly disappeared.  Juicier than the  sirloin I thought that these were better suited to BBQ, probably as the fat helped to keep the meat moist. 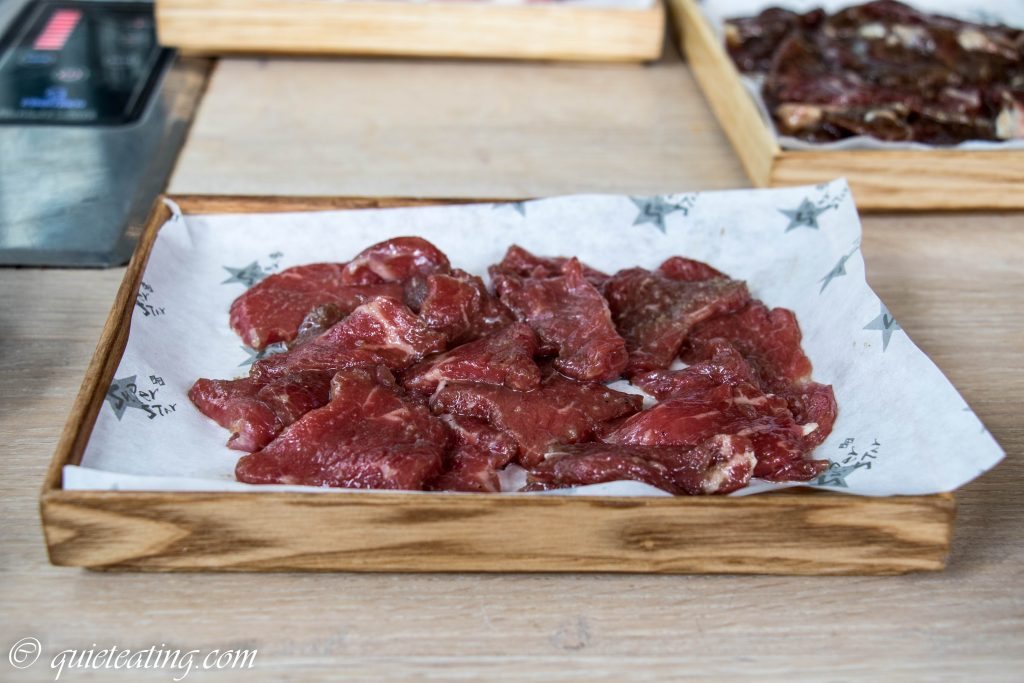 Beef rib galbi.  I think I preferred the sirloin.  Abundance of fat for BBQ meats just seems to be the winning formula. 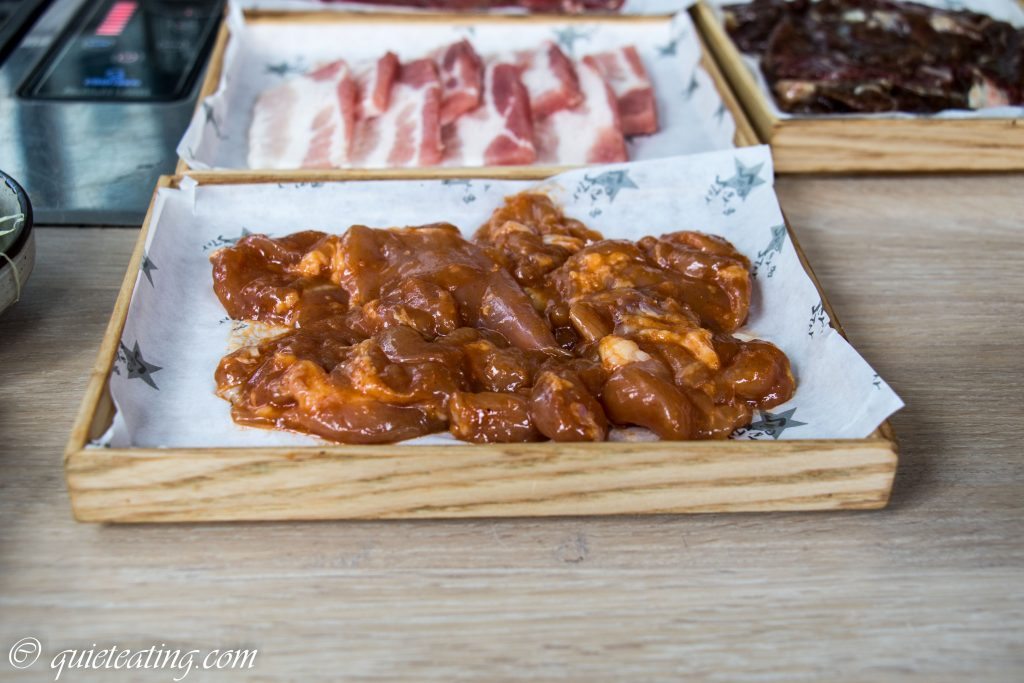 Spicy chicken.  At this stage, we were full to bursting. 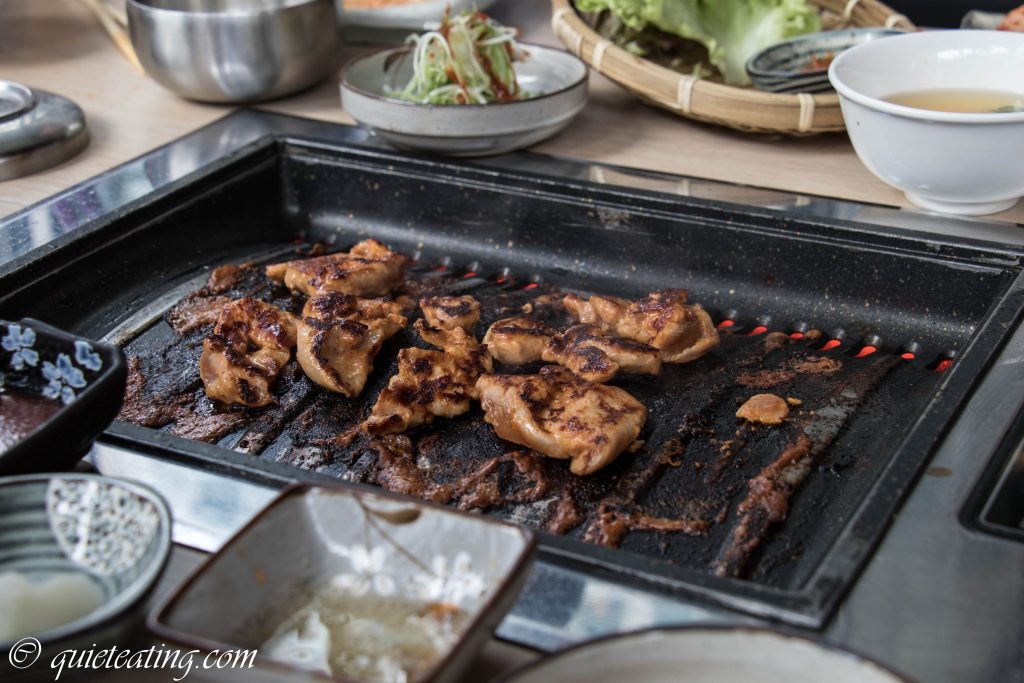 Hence I was able to snap a shot of the end product.  The chicken was probably the most ordinary of all the BBQ meats we had.  I guess for me, at least it is the fat which makes the best BBQ food.  Dreams of wagyu beef flash by every night for me. 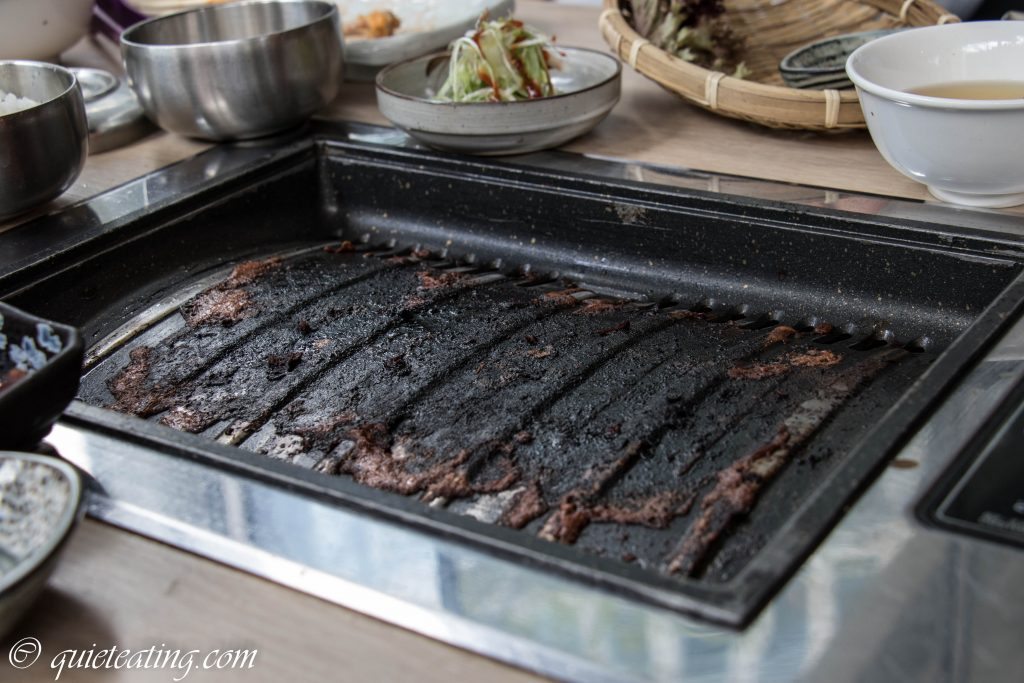 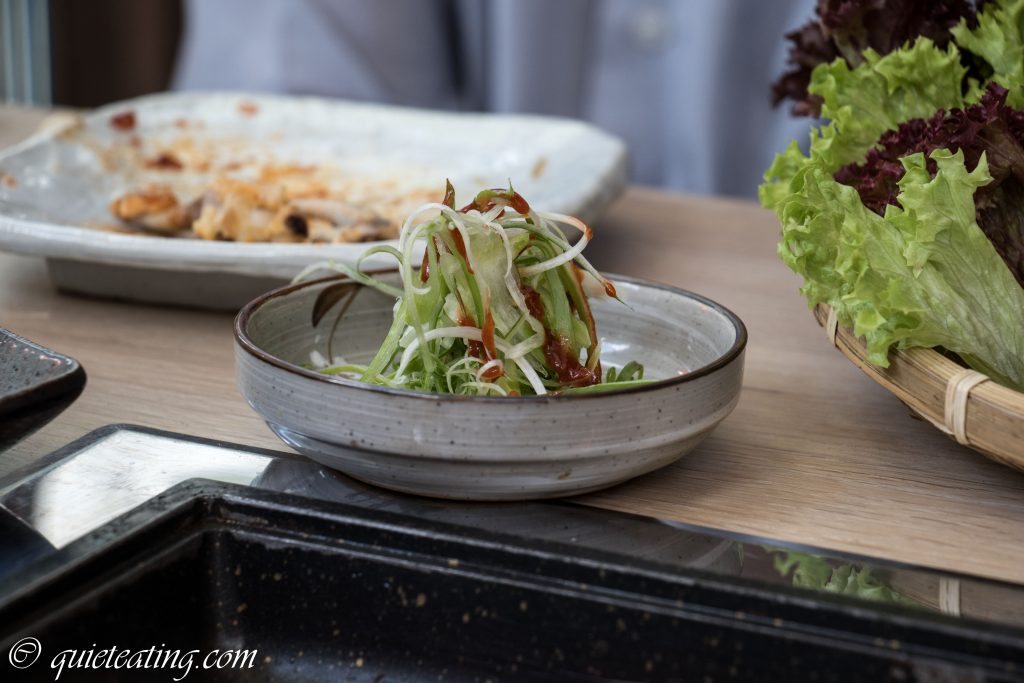 Shredded cucumber and lettuce with spicy sauce.  As a little token green to make some people feel better. 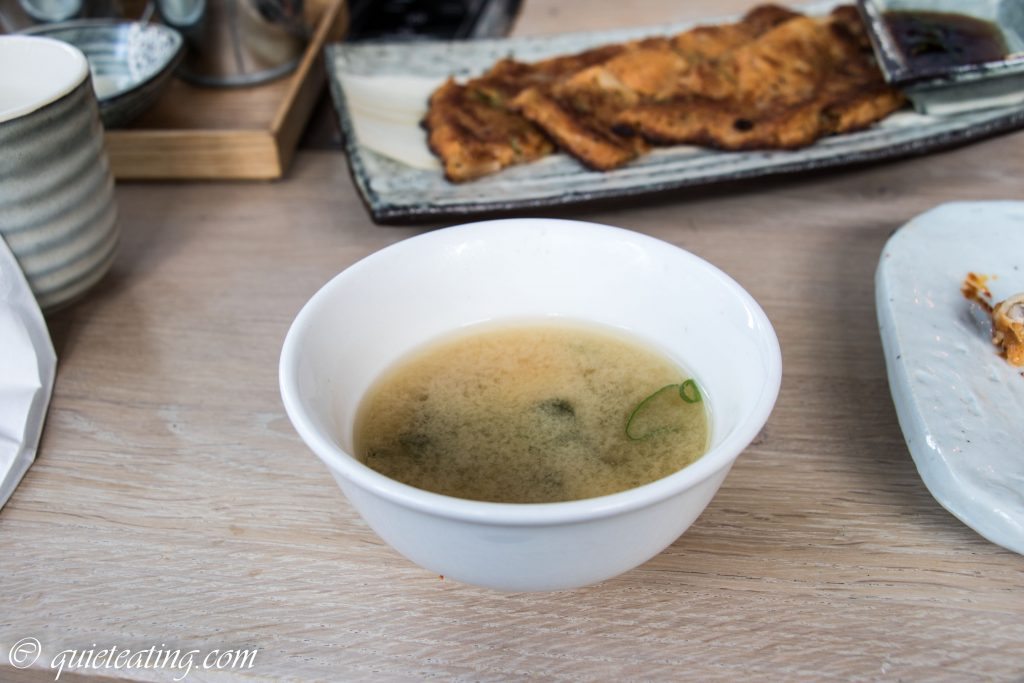 Miso soup.  To help wash it all down.

As I prefer to shun the limelight, when I first arrived to discover the lovely, bright and tastefully decorated but oh-so-open dining room, I was afraid I might be called upon to perform.  Dancing on the table is not for me.  Thankfully most of the activity was confined to the behind the scenes kitchen.  Although a little drama of our own did take place at our table.  Attempting not to burn the house down through casual ineptitude.  However, in the end, we did enjoy ourselves and it was a meal full of surprises.  I ate more than was wise on account of the tempting dishes.  We left topped up, happy and in my case grossly overweight.  That sounds like a superstar to me.

We were invited to review.  Estimated cost for the food per person (we had an obscene amount) is GBP30, a normal person would probably spend GBP20, excluding service and drinks.