Just when I thought that my life couldn’t get anymore thrilling, I was continuously proven wrong.  Today I was subject to vengeful action of the avian kind.

I got pooed on.

I know that some people may think that there might be a reason for such action. I guess in all fairness there are times when I deserve it.  Although in my defense, when I become particularly irate and berate a dining establishment, I think objectively they deserve it too. But it would take a cruel, cruel heart to wish such a thing on a person.

Yet I digress as I think that some of your interest about reading what I write is due to my perspective on food.  Rather than the various “exciting” things that seem to happen to me.  Constantly.  I guess it may be fun to read about, not so fun to experience myself.  Yet much as I would try to seek out the boring life, it constantly seems to elude my grasp.  So, this review is about Lotus, one of the few examples of a floating restaurant in London.  I can say that here I was actually seeking out something unusual, an establishment floating on the seas. Although, tied up as it is in a dock, vast and seemingly immovable to waves, and with full electricity and plumbing once you are on it, you could be forgiven if you mistook it for just another building. The physical separation from the dock as you cross the short drawbridge to enter the premises seems to say – leave your troubles at the door, instead come in for some serious eating.

We were here more for the dim sum choice rather than the more substantial dishes on offer and so it seems was half of the local Chinese community.  Just 10 minutes after it had opened, it seemed like almost every table was filled. Perhaps this goes some way to explain some oddities in the food.

Puffy and crispy with pungent and tasty roast pork filling.  The outer casing was a bit stale and cold though.  This should be flaky and falling to bits.  I guess when you expect a mass of hungry hunters for Chinese delights, you can be forgiven if you let standards slip a bit.

Again, these seemed to suffer from the char siu problem, being lukewarm. These were ok but when piping hot, these should be a joy to behold and taste. Not so this time. 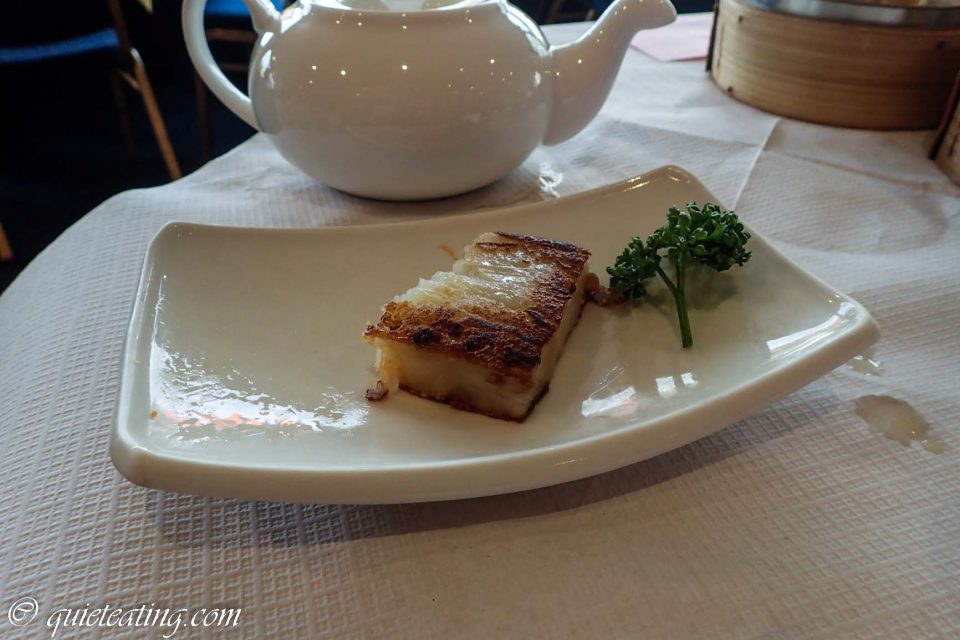 This was better, so much better in fact that this is all that was left.  Before I could whip out my camera, it was sadly depleted so.  Delightfully tasty and smooth was the light yam filling with small pieces of meat, all topped off with a bit of chilli oil. 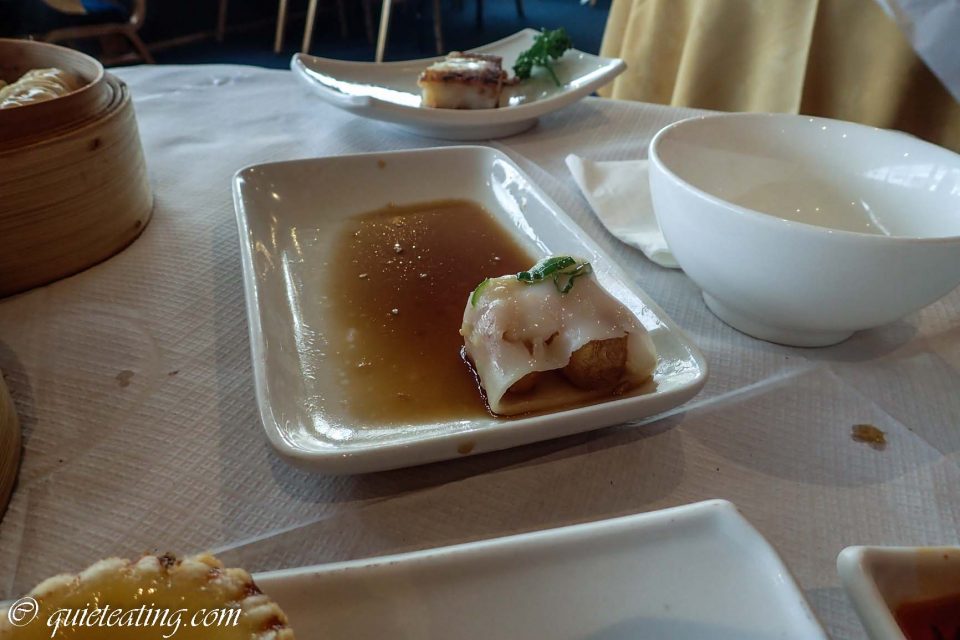 Probably the best dish of the day.  For the uninitiated these were dough sticks deep fried in oil and then wrapped in rice noodles, finished with soya sauce.  A delight when done properly like here. 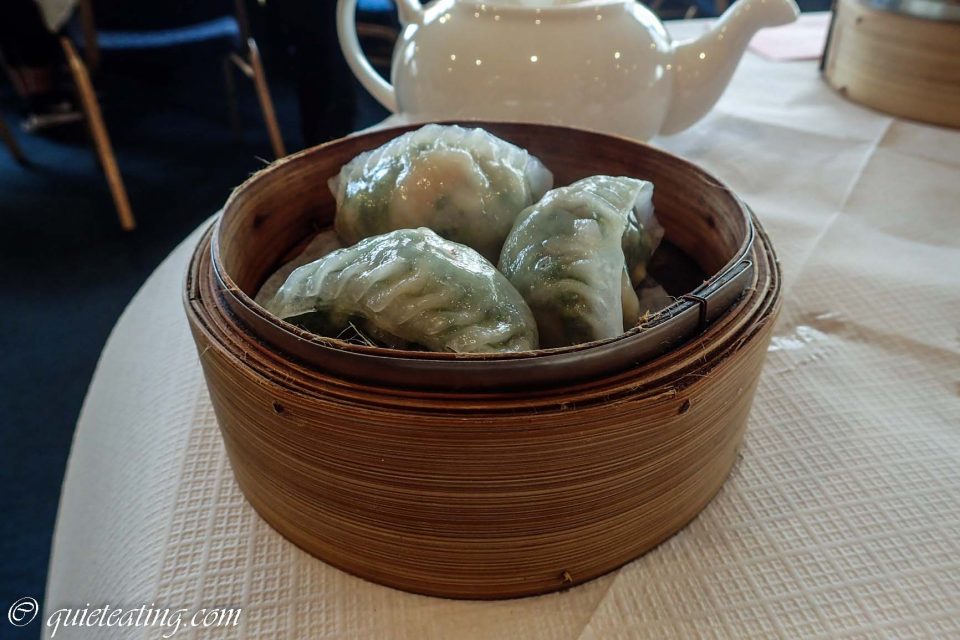 Minced chives in a rice paper filling. Light yet strangely and pleasantly meaty inside. Even without an animal or seafood. 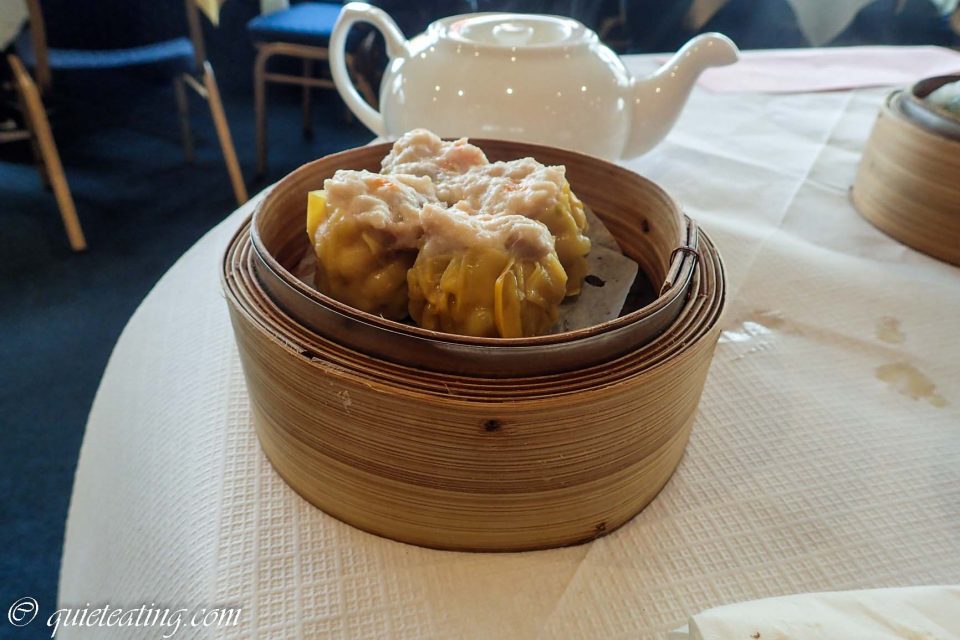 Sadly rather underwhelming.  Texture like a coagulated ball of pork and prawn. Well, that’s what it is even in the most impressive specimens, just that you usually hope not to be reminded of its rather uncouth nature.

Juicy but not really to my tastes.  Tasted rather plain to me and lacking in excitement.

Looking for positives in my meal, there were two high points.  Sadly though these pluses could be counted on one hand, even if that hand was stuck in the cookie jar.  Although I guess Lotus wasn’t that bad, really. With my recent experience, I can say that it isn’t as bad as being shat on.  But it’s not that far off.

Lunch (7 dishes shared between 2) was GBP14 excluding drinks and service.