Intimidation by size can apply to many things in life.  Whether it was that rather menacing looking white van that fought you for that last car park spot or the apparent Goliath standing implacably on the tube.  Thankfully, it doesn’t always have to be such explicit bullying as here it was simply, that the man on the table next to me had a fairly large camera.  I wondered if he was an annoying foodie like me. 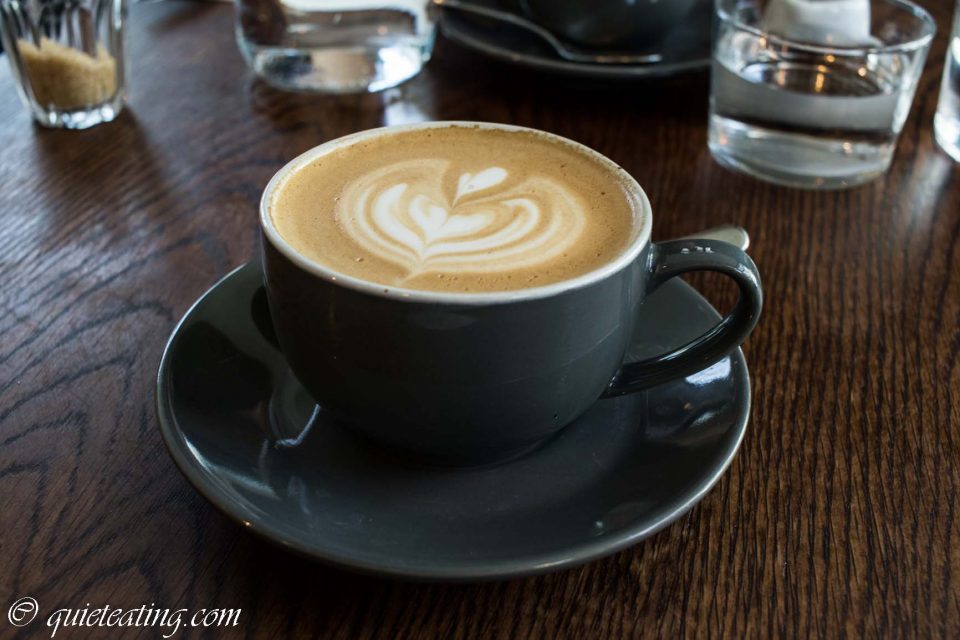 Latte with latte art.  I was gently eased into the meal with coffee which was pleasant and most importantly, unburnt.  Although perhaps I should have expected as much as I was in Brixton, a slightly more edgy part of town.  I.e. full of people with artfully ripped clothing (costing more than the unblemished article), expensive iMacs and smartphones.  I have learnt from experience that such places seem to have good coffee.  I also noted that the rest of the food was in keeping with the California lifestyle, good coffee, plenty of grains and healthy sounding and looking food. 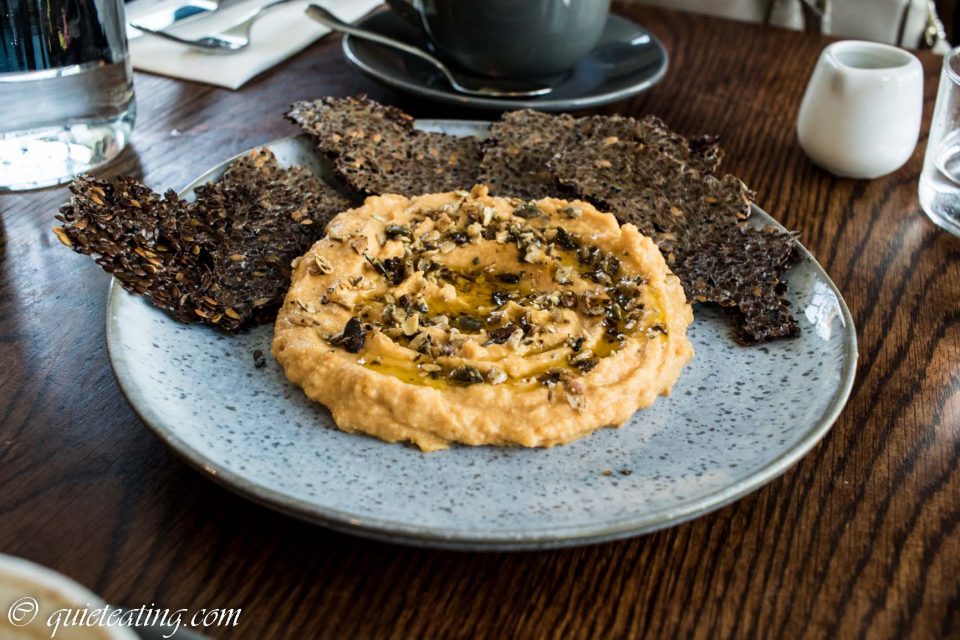 Sweet potato hummus, linseed crackers.  The thought then did cross my mind as the first of the food arrived, why if food was healthy, did it have to look vaguely unappetising.  You could be forgiven in thinking that this was something akin to baby food but it tasted better than its mashed up form implied.  Crispy and light crackers providing plenty of nutty flavour, it was an interesting counterpart to smooth flavourful sweet potato mash.  Something to try again. 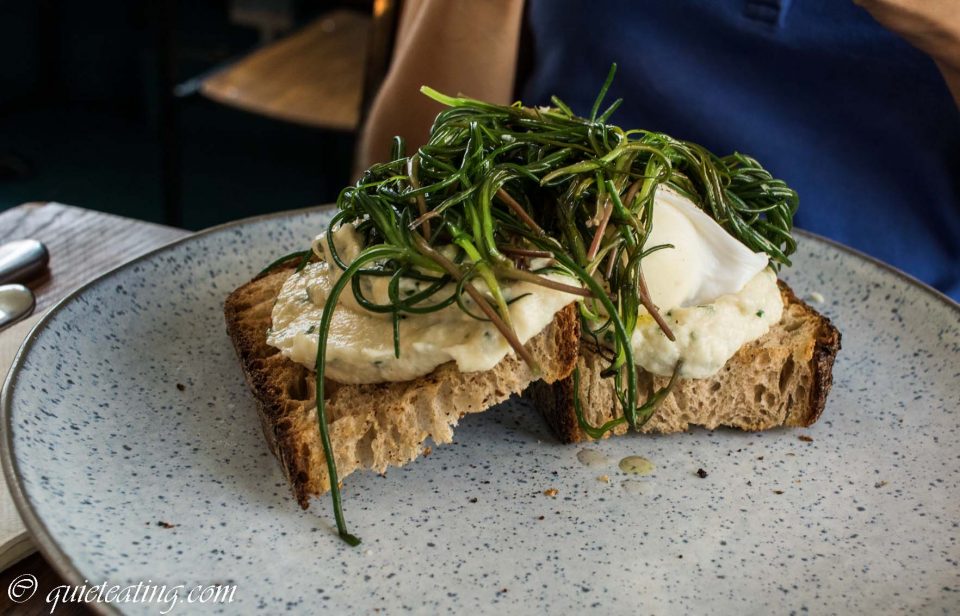 Salt cod brandade, monk’s bread, poached duck egg, sour dough.  I have had an unfortunate instance with salt cod brandade before, thankfully this was not to be the same.  Not too salty and on nicely crunchy sourdough, it was good. 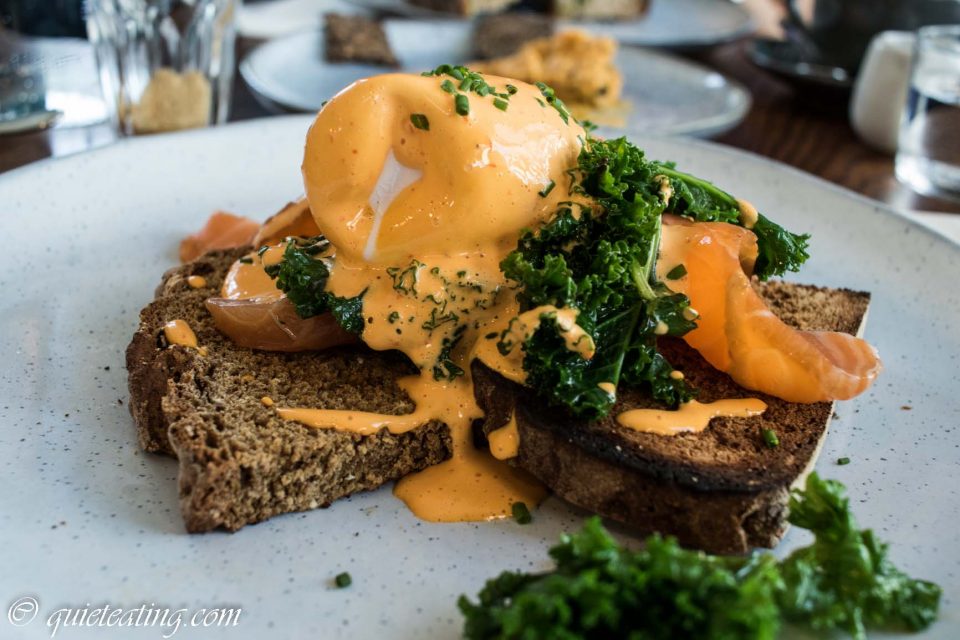 Sriracha royale, house smoked salmon, rye soda bread, duck egg, greens, Sriracha chilli hollandaise.  Very pretty to look at, rather less so to eat.  Similar to clothes you might see on the storefront dummies.  Looks good in the windows but the same is not true when I’m wearing it.  Regarding this dish, I freely admit that my less than exuberant response to this dish may be a personal issue as the rye soda bread wasn’t really for me.  There just seemed to be too many things going on, on the same plate.  It seems slightly too complex for my peasant palate.

Throughout the meal, one thing that I particularly enjoyed was the atmosphere.  Simple, uncomplicated and not trying too hard to be rustic.  I think the distressed furniture may actually have earned their scars while in use rather than in a factory.  It was a relaxing place to spend an early lunch on the weekend.  Yet the man next to me did provide an unsubtle reminder, that seemingly irrational exuberance over all the food erodes your credentials.  Constantly exclaiming everything is “awesome”, “falls apart in the mouth” and my personal favourite “well cooked” makes me suspicious that actually no attention is being paid to the actual food.  So taking into account the bright and airy atmosphere, the fair price and decently tasting food, this was an above average meal.  Let’s leave it at that.

Lunch (1 main and a coffee) was GBP 15 excluding service.