I was warned that lunch with a 2 year old can be an enlightening experience.  They do not make for the most engaging of dining companions.  She was much more interested in licking her pencils, throwing them on the floor and then trying to see how much of her head she could fit into the now empty pencil holder (i.e. cup).  As her parents complained, now that she could talk, the problem was that she wouldn’t stop.  Although, perhaps fortunately for me, she refuses to speak to me.  So my attempts to engage were thoroughly and completely ignored.

I guess the problem is that I’m just not that interesting enough.  Or perhaps kids are quicker on the uptake than adults, they can more quickly sense my picky self inside.  Perhaps they are more sensitive to non verbal signals and can sense my general disinterest with some people, unless they are a source of food (providing things to eat rather than being someone to eat).  Yet, I guess I should be thankful sometimes.  As engaging in a goo goo gah gah conversation inter-spaced with random utterances of “Mum” challenges communication skills on both sides.  The little one (girl) may justifiably become cranky that people fail to understand that she wants THAT blueberry.  The larger one (me) just ended up confused.

As I know from my workplace, difficulties in communication can sometimes end up in tears, so perhaps it is best that I stopped there. 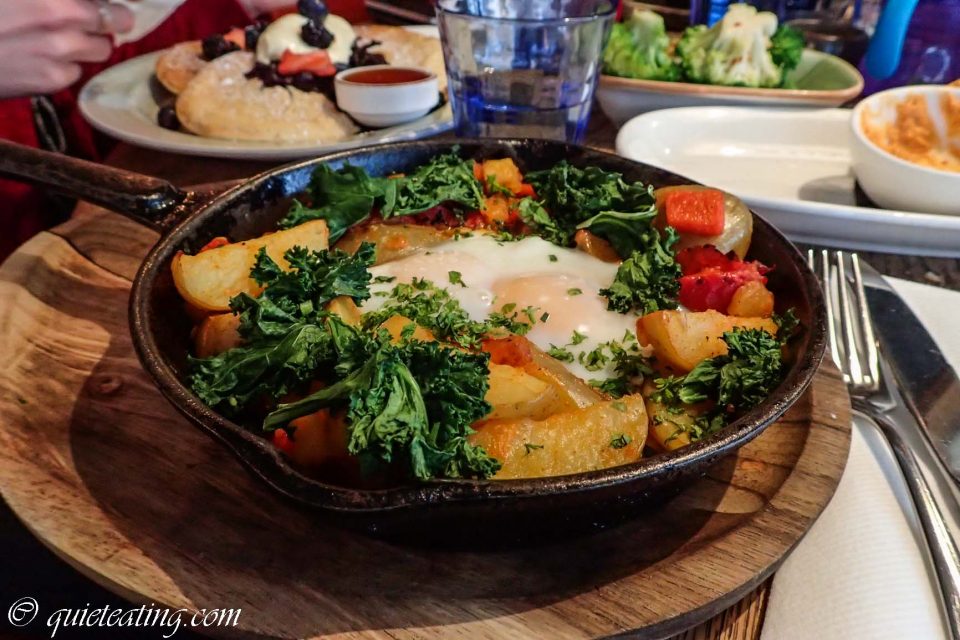 Chorizo hash, roasted peppers, curly kale and baked eggs.  This looked nice.  Until I mixed it up and then it looked suspiciously like food which my smaller companion might eat.  Sadly, it tasted like that too.  I had to add quite a lot of seasoning just to make it taste of something.  The eggs tasted of nothing, the peppers like they were sacks of water and the potatoes, like they had been extruded from some machine.  As for the chorizo itself, it was interesting.  As I sat there eating my 3 small chunks (generosity doesn’t seem to be this restaurant’s strong suit), I marvelled at their skill.  They had found chorizo which went well with this dish, as it tasted of nothing too.  This was one way to get across the message that they weren’t trying that hard. 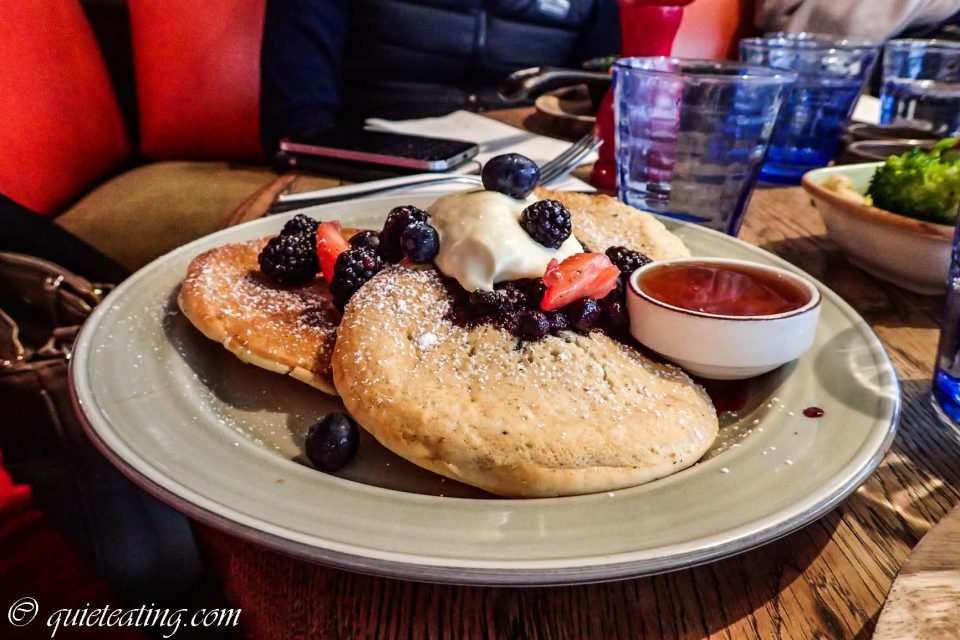 Buttermilk pancakes with berries, vanilla clotted cream and maple syrup.  Following experiences of the hash, I approached the pancakes with trepidation.  Although such fears may have also been fed by the sermon I had heard earlier that morning.  In an interesting little aside from the main scriptural message, the pastor explained how dogs can sometimes vomit up their food.  They might then go around the corner and come back and greet the pile with delight.  They would then think that it was their lucky day, as a free meal was there for the taking.  Yet perhaps this is another way of communication, marking their territory as theirs.

Moving on from a disgusting aside, the pancakes were really not that bad.  These were actually pretty good.  They were soft and cooked (as you would expect pancakes to be) with fresh fruits and maple syrup from the jar.  A pleasant dish if not really that technically difficult.  I was getting mixed messages from them with such a disparity of dishes.

When food isn’t that good, I try to think on the more positive side.  That I had a good catch up with my friends and their little one.  There was some entertainment too as a meal with a person guaranteed to lower the average age can add spice to life.  When communication is difficult, they can force you to re-evaluate things at a more basic level.  I.e. looks don’t matter that much.  Taste isn’t really a talking point either.  Instead, what is most important for a 2 year old and their parents is that the food stays down.  I think that’s a clear message that it’s ok.

Lunch (1 main) was around GBP12 per person excluding drinks and service.