Native is a tiny new restaurant in Covent Garden focusing on game and foraged foods.  I admit to being a bit skeptical about this type of cuisine.  Sounds like scavenged to me.  Originally starting off as a pop-up, it now occupies a fairly minimalist Scandi-styled space in Neal’s Yard. Home of cheese.  The dining room was  decorated with various bits of plant material and flowers – we had the pleasure of sitting across a pair of antlers that someone had hung a baseball cap on (although that might not quite have been part of the original decor scheme…). 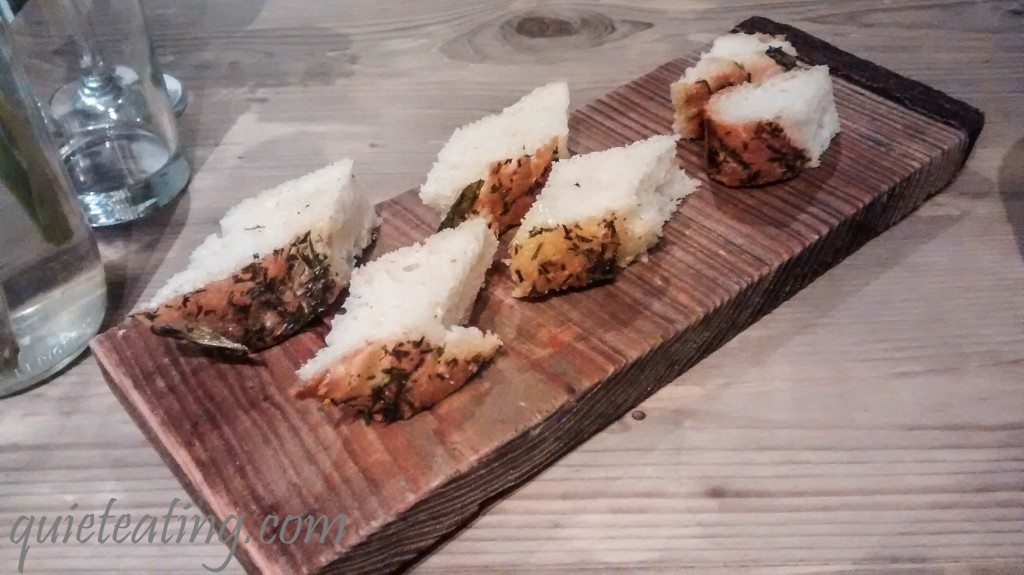 House bread was a freshly baked focaccia that was topped with various herbs and smelt of olive oil. It was warm, soft and a lovely start to the meal. 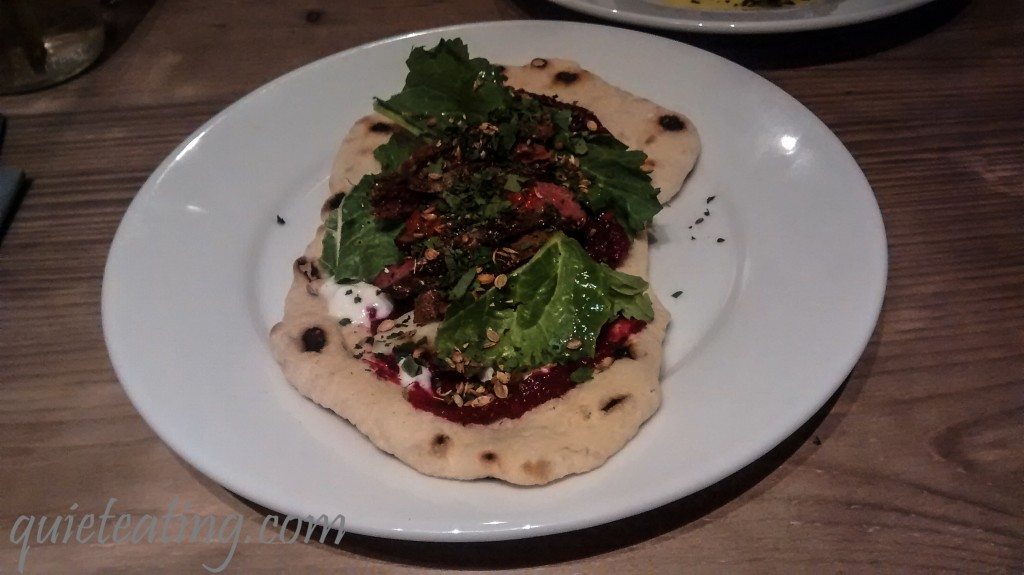 This was essentially a posh kebab – with a nice blend of flavours – the gaminess of the wood pigeon being offset by the beet and the slight spiciness from the harissa. 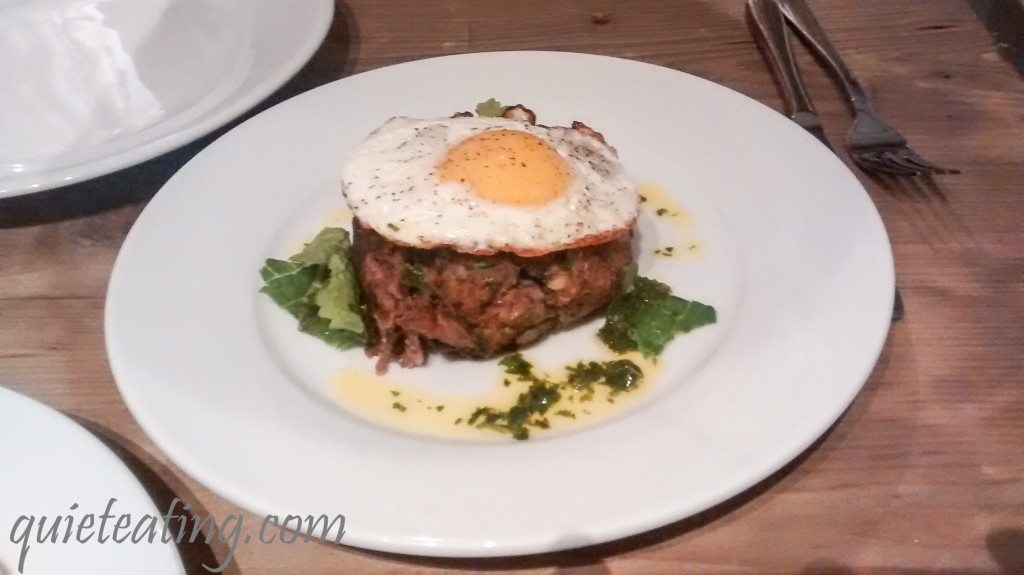 A breadless venison burger with the turnip tops mixed in the hash, adding crunch and texture to the dish; and the runny egg adding richness. 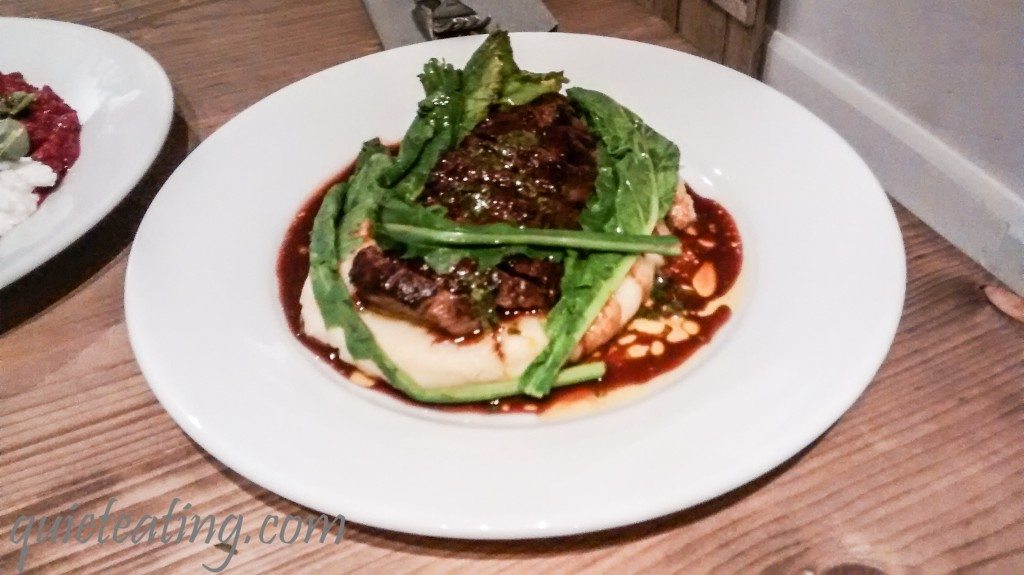 More venison – this time as a steak – this was flavourful and juicy. 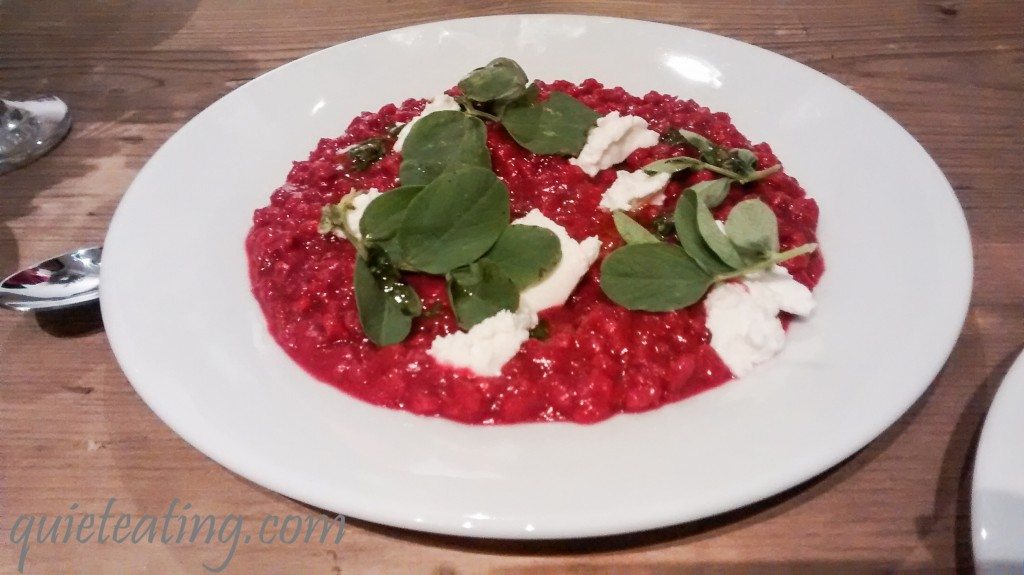 The only vegetarian dish we ordered off the menu – despite the colour, the main taste and texture in this dish was provided by the barley – with the goat’s cheese adding contrast to the more bland barley.

We also ordered a side of Portobello mushrooms cooked with wild garlic – this showed that when the ingredients are this gone, all you need to do is serve it fresh with some light cooking. 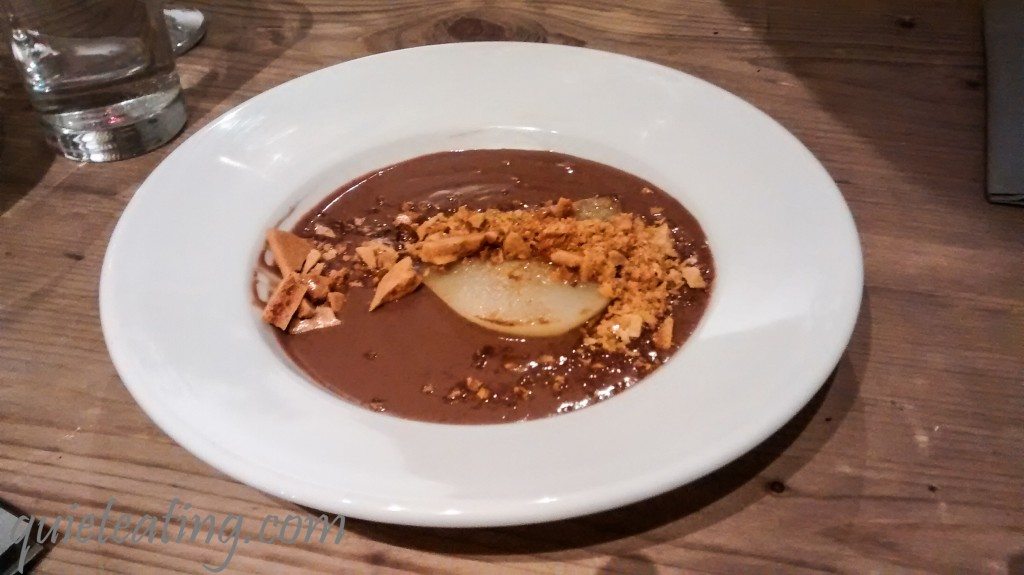 This was the only dessert going on the menu – and provided an interesting contrast of flavours. The sweetness of the pear and chocolate sauce was was offset by the aniseedy flavour from the fennel honeycomb, giving a complex mixture of taste to this dish.

Overall, execution of all dishes was well done and uniformly good in standard. It is a relatively limited menu, using mostly seasonal ingredients – on the night, we went there was only one meat main and two vegetarian mains (with a lot of vension and beet); and only one choice of dessert. Service was charming – we were served by one of the proprietors, Imogen on the evening that we went, and it seems that they are still looking for staff to fill up their ranks. As an added nicety, as the last people in the restaurant that evening, we ended up being offered a large chunk of the lovely focaccia to take home – they were otherwise going to chuck it out as they baked their bread fresh every day.

We went on a Sunday night – when the restaurant was quite empty – however, given the quality of the food and reasonable-ness of the price for such a central location, it may be well worth getting down there before the masses arrive.

Dinner (2 courses) was GBP 25 per person excluding service and drinks.