Interesting name.  That was my first reaction when I heard the name “Low, Slow and Juke”.  Does that mean you have to dance for your meal?

This is a new restaurant (opened in Feb 2016) serving what I would guess (by the names of the dishes on the menu) is American comfort food.  St Louis slab ribs, anybody?

I guess it is exactly the right time considering the political battle taking place in the US right now.  Maybe a great place for Americans to congregate and discuss the finer points of candidates’ positives and detractions. 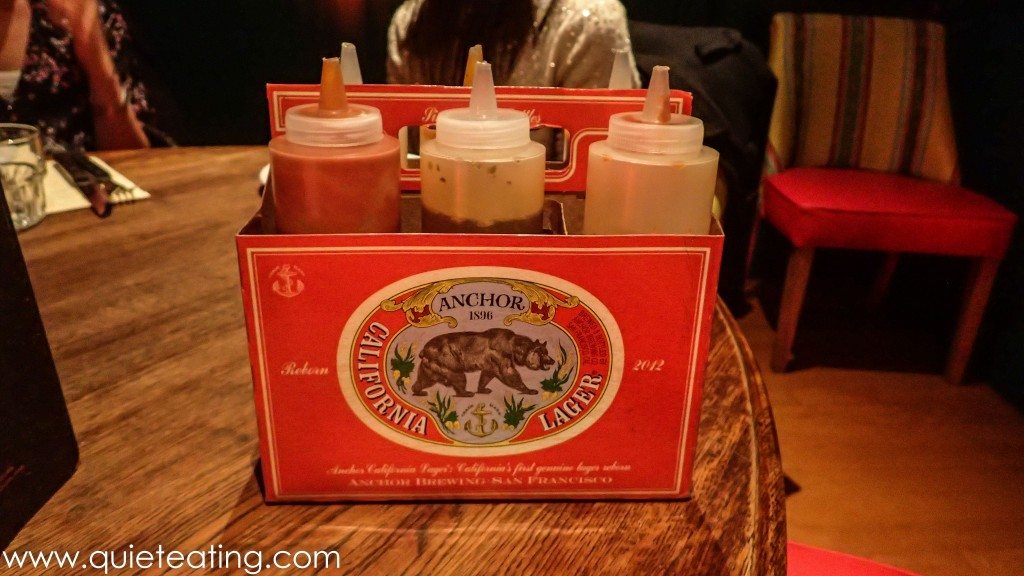 Before any of the food arrived, this six pack of sauces was delivered.  Comprising ketchup, mayonnaise and mustard with crowd pleasing Americanisms spicing things up, I began to have a bad feeling already.  If your restaurant is less than a month old, it seems rather odd that that the stickers labeling your sauces seem to be falling off… 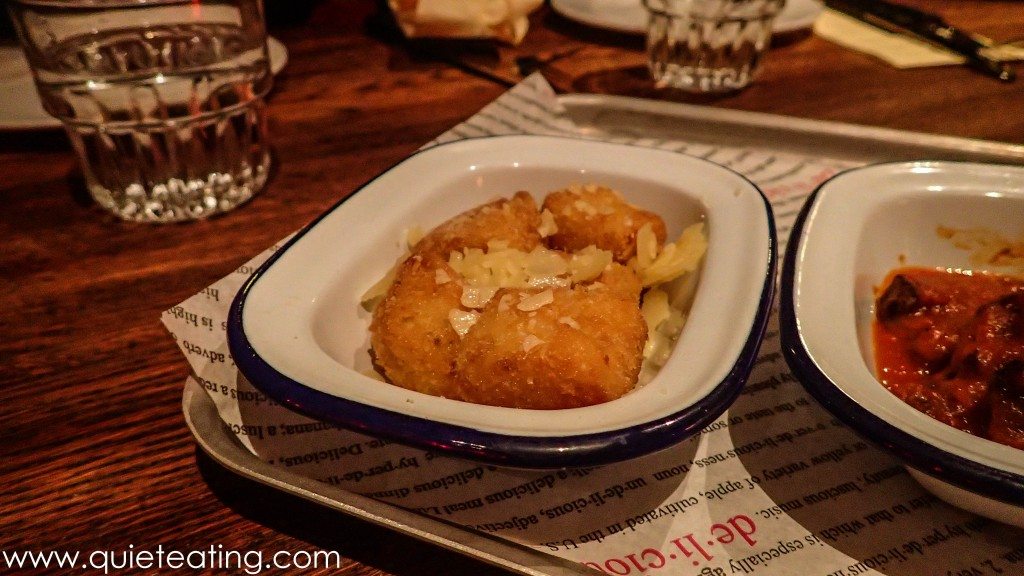 Deep fried mac and cheese.  No one could dispute that this was deep fried.  It was harder to establish the mac and cheese part though.  I could see rather bland, unappealing cheese shavings on top, which must have come from that altogether rather tasteless Kraft cheese (I do wonder how it is even classed as cheese) so popular in the States.  Unfortunately, the mac was much more easily uncovered.  Deep fried dough balls.  Alright… 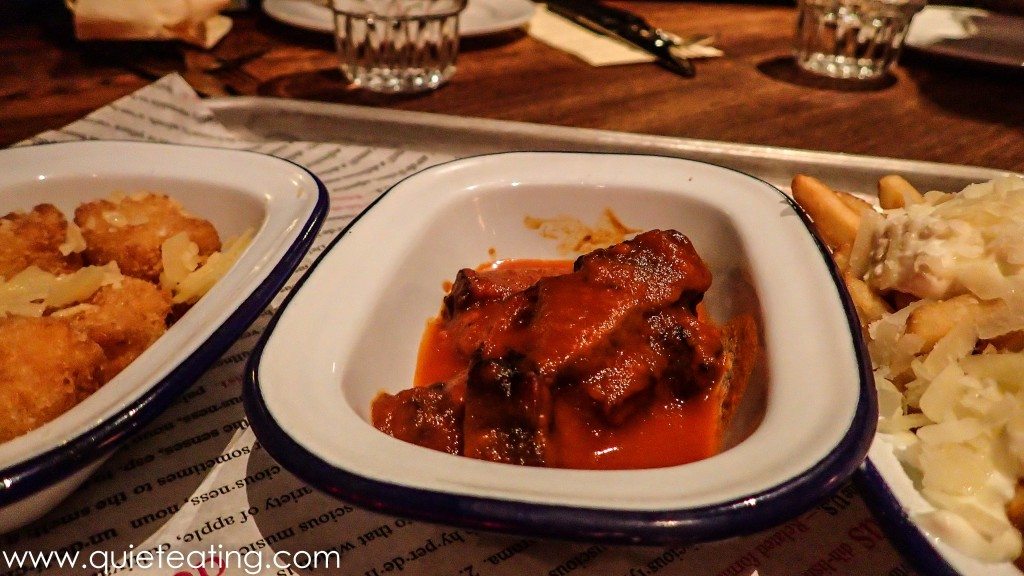 Burnt ends.  No question here about these not being easily identified.  Emphasis on the burnt.  Tough, overcooked and slathered in some generic tomato sauce, these were a definite step down from the promised succulent smoked pork of the restaurant. 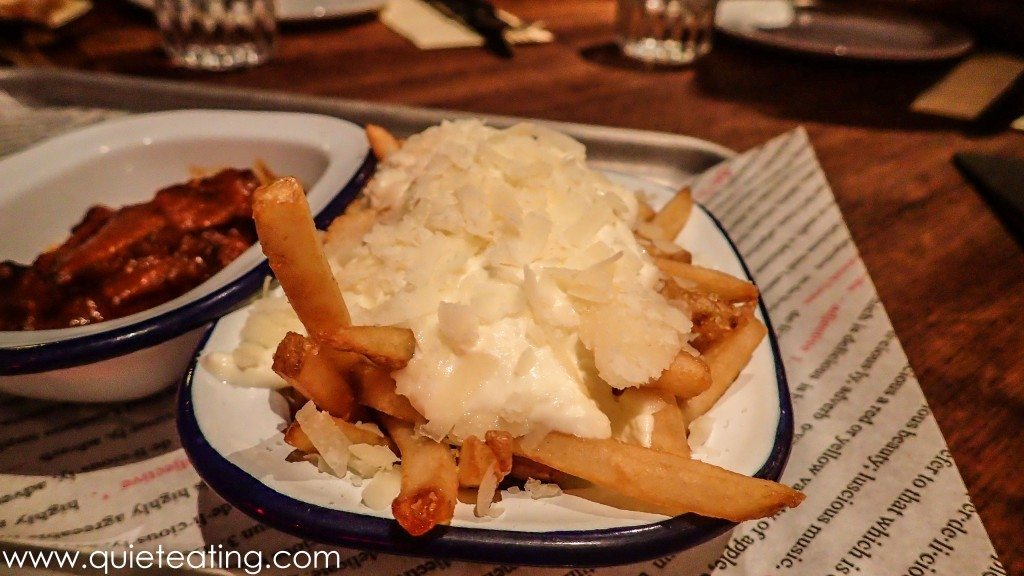 Parmesan, truffle and sour cream fries.  I confess to being unable to taste the truffle here.  Although maybe this was overpowered by the potatoes and the sour cream.  Cheese and fries.  Tasted like cardboard and yet more cardboard.  Altogether unappetizing but everyone was hungry hence it was actually finished.  Desperation makes people do weird things. 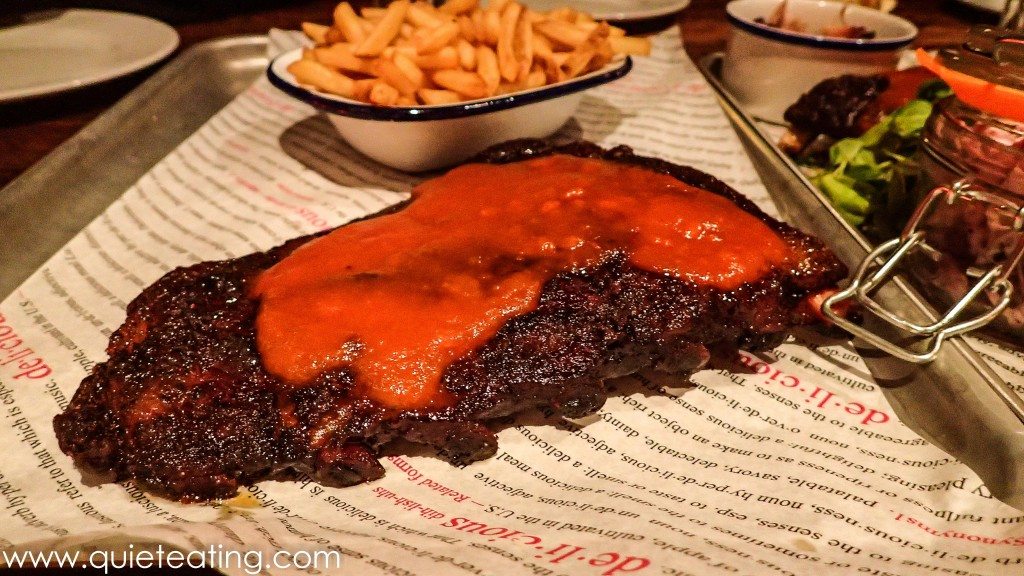 St Louis slab ribs.  The signature ribs!  I was waiting with bated breath for these.  I need not have bothered.  It looks so shiny because it is!  On account of all the oil and a rather toxic looking and rather bland sauce on top.  Tough, rather tasteless and rather disappointing. 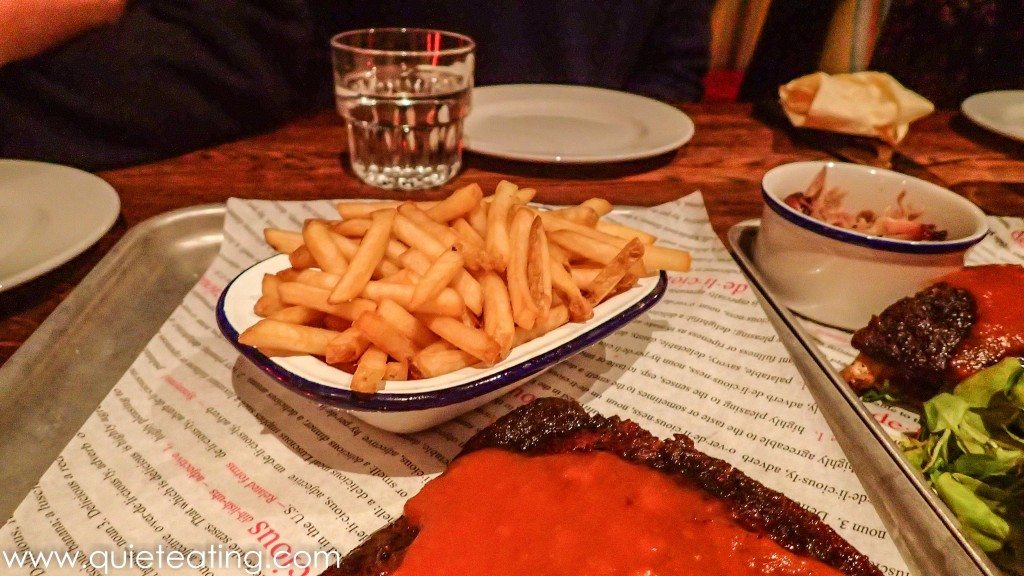 Plain fries.  The cardboard without the trimmings. 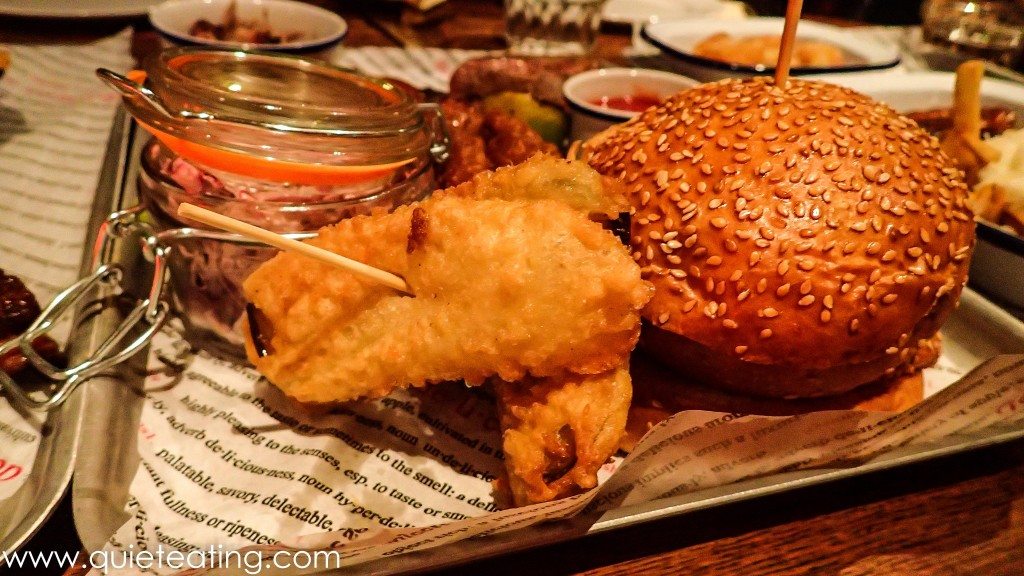 One view of the smoked platter.  Fried pickles and brioche buns. 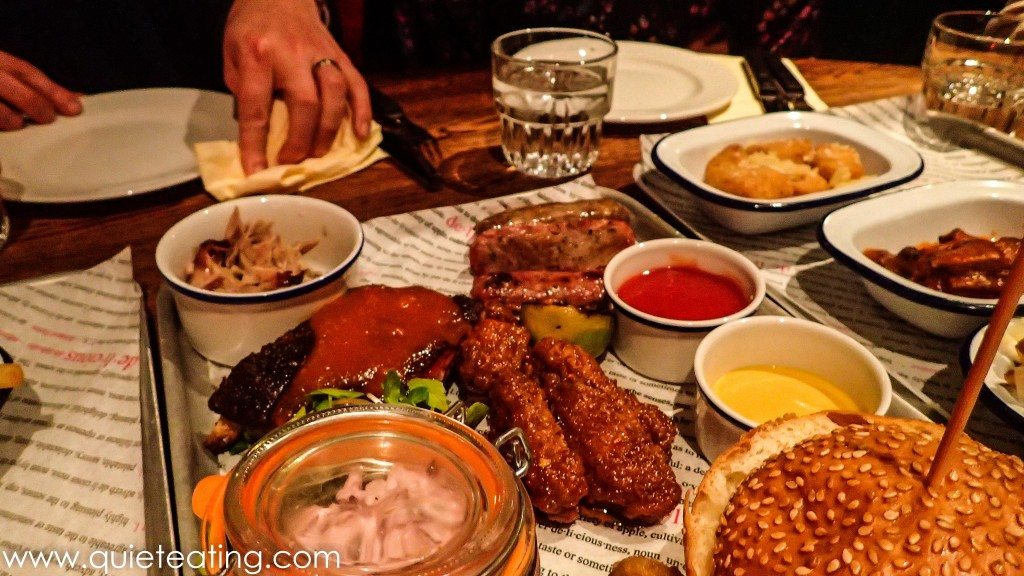 Starting at the top left going clockwise.  Pulled pork.  Smoked baby hot links.  Ketchup.  Mustard, chili and caramel wings. Red cabbage slaw. Baby back ribs.  The smoked platter was advertised by our waiter as containing the best of  the restaurant.  The pulled pork was tasteless, the ribs indistinguishable from the slab and the brioche buns were buns.  Although, at least the links and cabbage slaw were decent.  Here we came across the hidden gem in the rubbish dump.  The chicken wings.  Succulent and full of flavour, these stole the show.  Maybe these tasted so good by way of comparison though…

It seems that the new bandwagon to jump on after ramen and burgers is the smoked food revolution as put forth by Low, Slow and Juke. Although it seems that they are a little late to the party with Pitt Que and Blacklock already established as the go to eateries for this sort of thing. Apparently, the restaurant really didn’t want us to go.  We were probably one of the few diners in their cavernous dining hall.  They did ignore our attempts to pay the bill.  Despite trying desperately to get the waiter’s attention for the bill, they seemed to be able to find anything else to do but serve us.  After 15 minutes, I took the novel approach of physically marching up to the bar and demanding to pay.  I guess there is a first time for everything.

We finally managed to exchange our cash for an experience.  Not to be repeated.

The food was so impressively bad my fellow diners insisted that we stop by a reliable nearby gourmet outlet.  At least it is reliably bad. 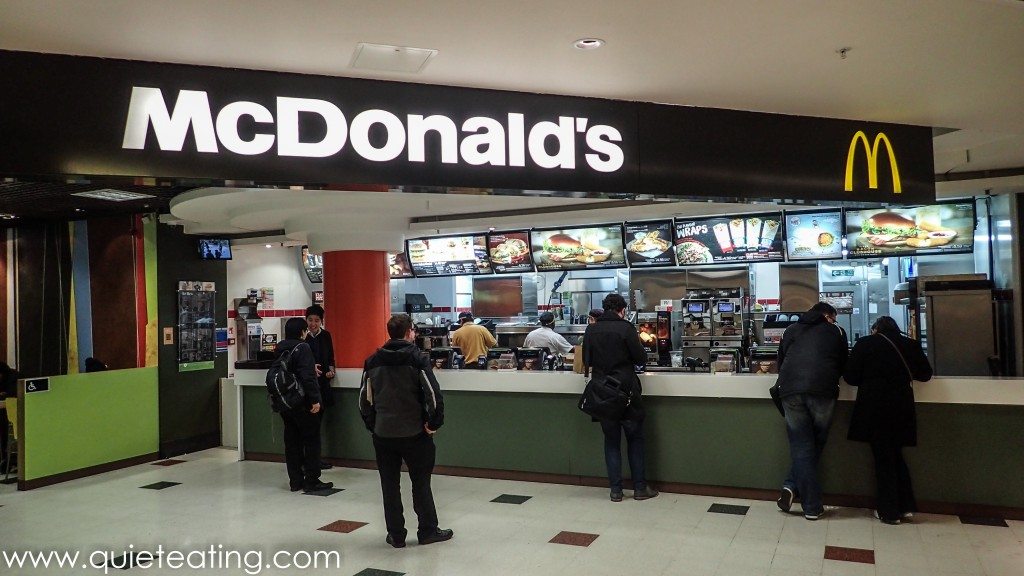