It is amazing how small things can make a world of difference.  It could have been the single number you were off from the winning lottery ticket or perhaps (as is more common for me) being the lucky recipient of that slightly diseased piece of meat.  Thankfully, on the way to the Marksman, I was to experience a particularly fortuitous encounter.  As I was standing opposite the Marksman, waiting for the traffic light to turn green, I heard a loud splat.  My eyes were then drawn to a rather fresh and wet small puddle of white on the road.  Yes – a bird had decided to empty its bowels near me.  Thankfully, I was a step away as another 10 centimetres would have put my head in the firing line.  Something which would not be fun.
So having avoided such a mishap, I was in a rather good mood as I stepped into the Marksman. 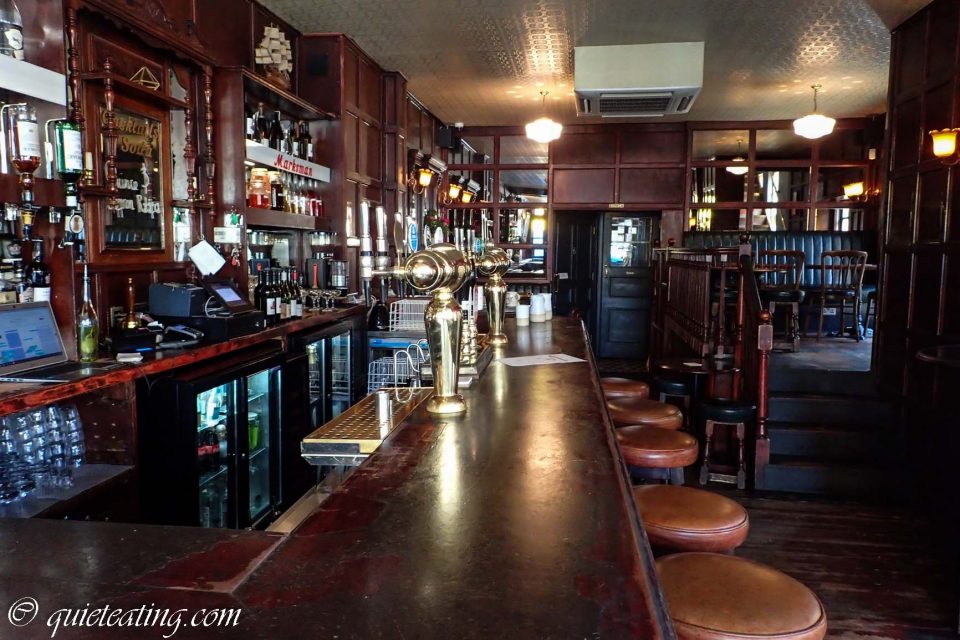 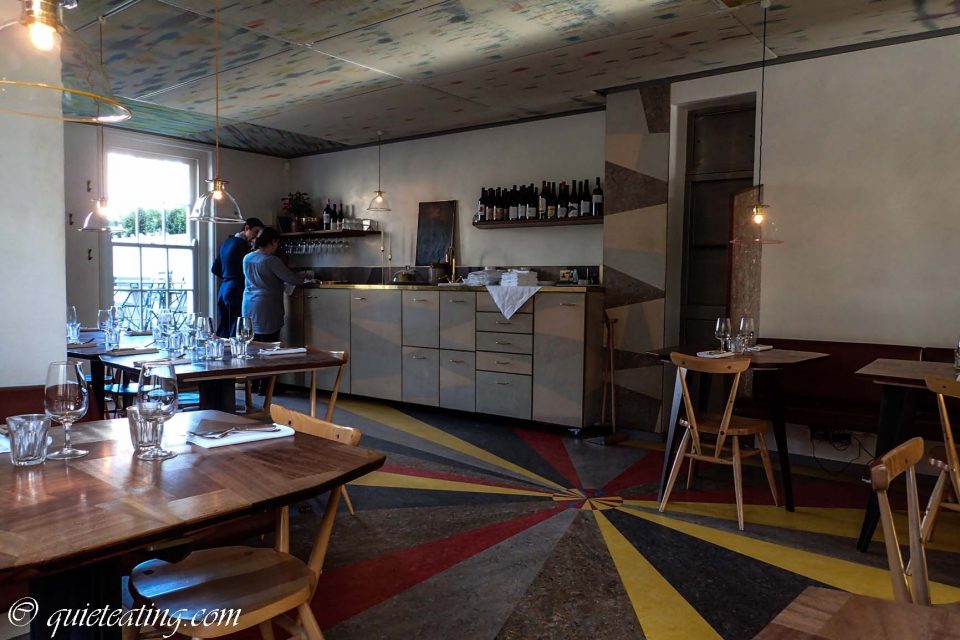 Upstairs, bright and modern with Nordic furniture.  A clean arrangement, the same which was to show in the food. 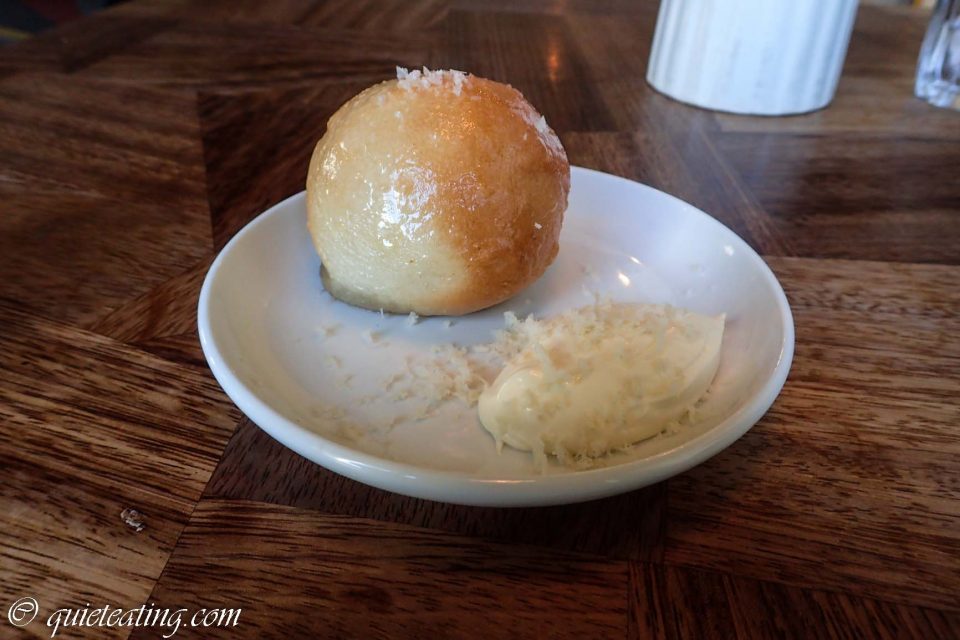 Beef and barley bun, horseradish cream.  Packed with succulent minced meat and barley, this was excellent with a little bit of bite given by the horseradish.  Only issue was that the price was a bit steep for one bun.  However, we can’t have it all. 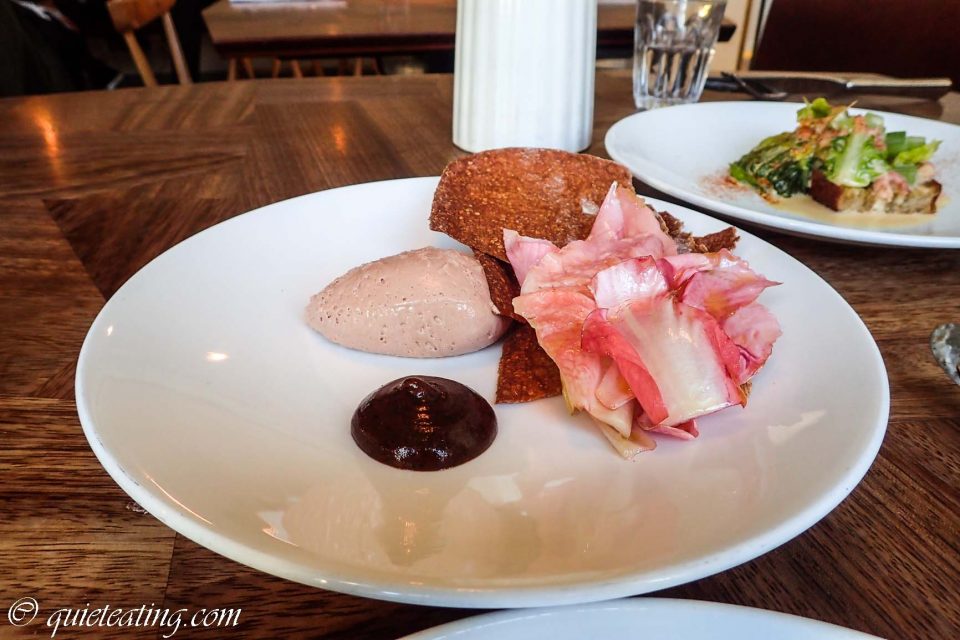 Duck liver, apple and rye.  One of the starters, this was an interesting combination.  The brittle hardness of the rye, the melting softness of the liver, the leaves and the apples rounded it off.  The duck liver was great, being just savoury enough without overpowering the other elements of the day. 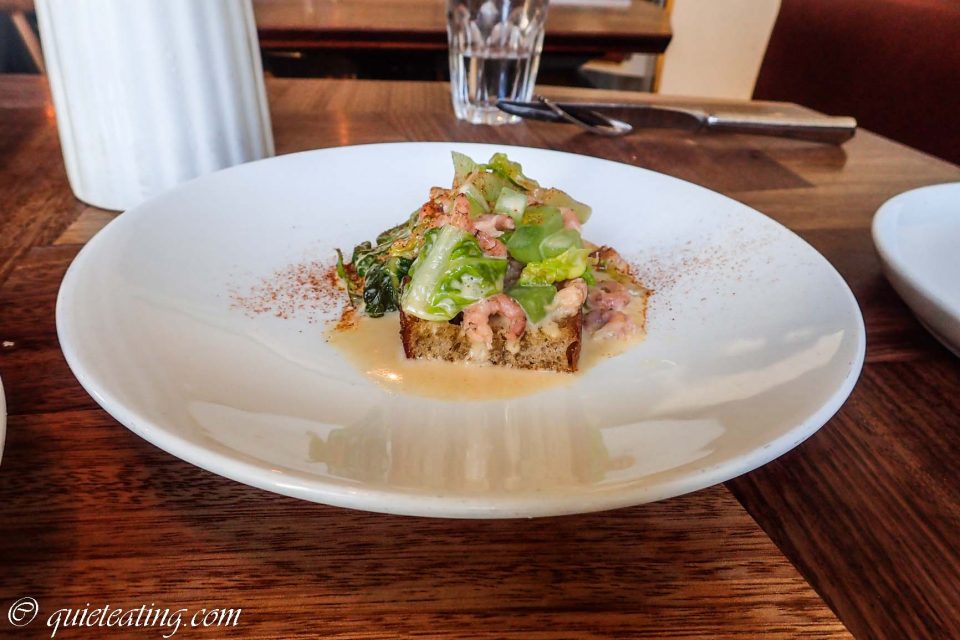 Potted shrimp on toast.  Not bad as well if not as delightful as the liver.  There was sadly just too few shrimp to do them justice.  The bread was surprisingly springy, even after being soaked in sauce, it added a welcome springy texture to the dish. 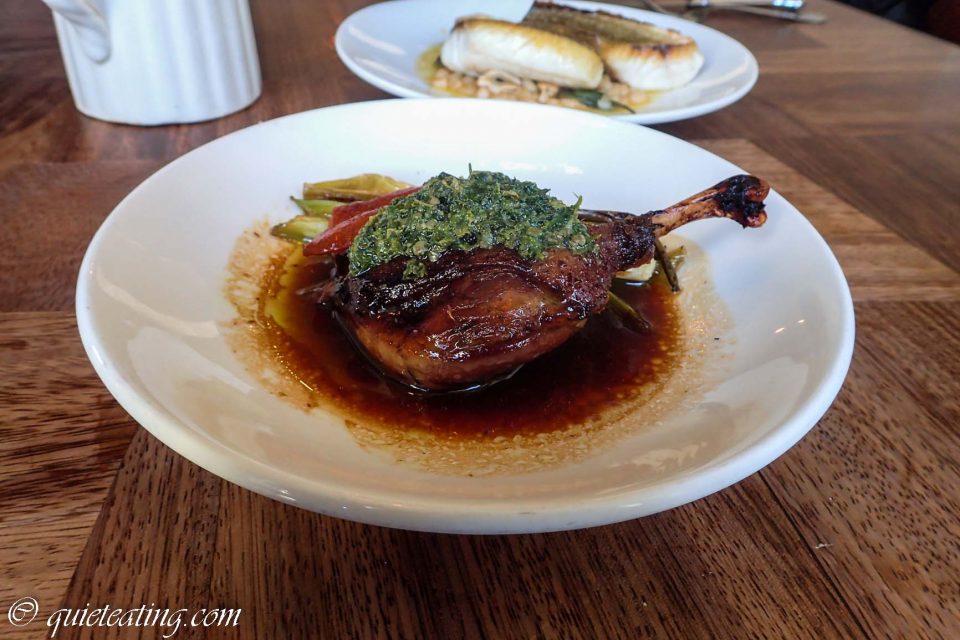 Braised duck leg, carrot and green onions.  A rich sauce with appetising vegetables.  Cooked skillfully to be moist, tender and full of flavour, this was the star of the meal.  An excellent duck.  After having this, I thought maybe this was a sign that the sun was shining on me today. 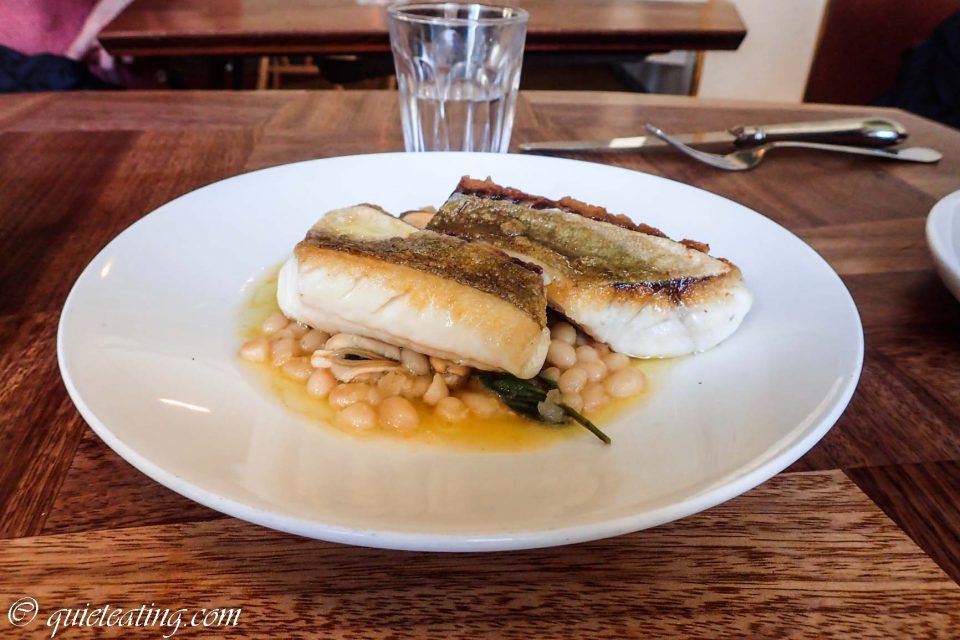 Gurnard, devilled mussels and white beans.  Someone in the kitchen clearly knows their cooking.  Succulent flesh cooked just right.  Mussels and beans to layer the bottom.  The flaky texture and light taste of the fish went well together with the slightly heavier mussels and the clean tasting beans.  An excellent pairing. 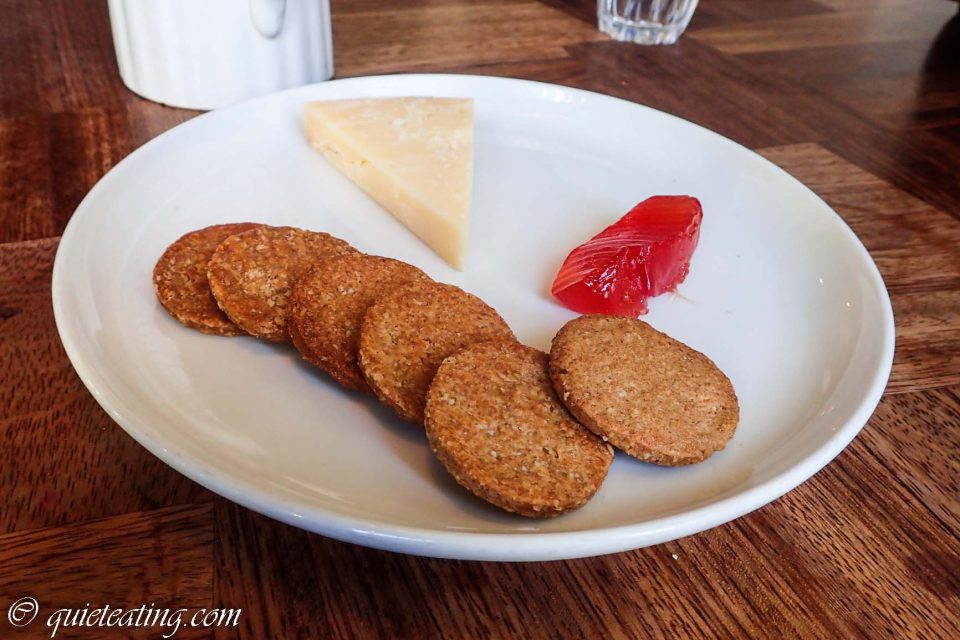 Isle of Mull, quince and oak cakes.  I am probably showing my lack of culture here but this didn’t really set my world alight, unlike the duck or gurnard.  It was ok, if not particularly innovative or difficult to do.  The cheese, which could have been the star of the show, was unfortunately eminently forgettable. 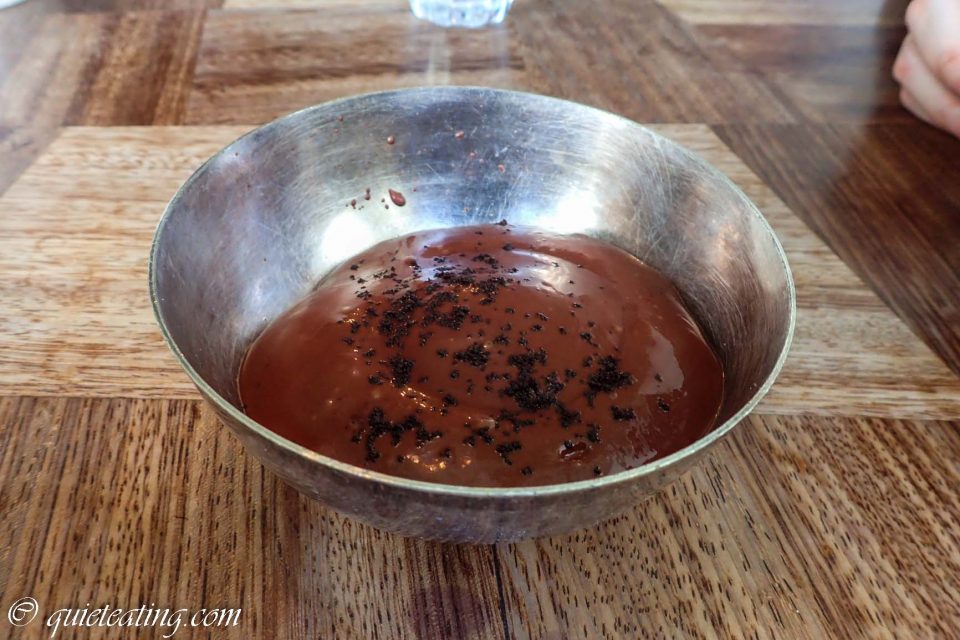 Chocolate, creme fraiche and honeycomb.  Thankfully the next dessert appeared to save the day.  What it lacked in looks, it made up for in taste.  Deep chocolate taste with lighter creme fraiche and the icing on top, or perhaps, I should say the honeycomb underneath gave a bit of crunch and concentrated sweetness.  A great combination.

So at the end, as I sat back and reflected on the meal, I thought that it was not bad.  I also thought about how extraordinary it is that even some of the smallest actions can change your life.  Whether you took that step without looking, chose that random looking item on the menu or chanced across the kind of weird looking pub across the road could make a world of difference.  Sometimes providence can shine down, even on me, and if it leads to more places like the Marksman, I could do with such type of luck.