I admit that I haven’t tried Bone Daddies.  Slightly hypocritical for a professed ramen addict such as myself.  So when a new branch opened up in Victoria, it seemed to be begging me to rectify this issue.

I have always found visiting a new restaurant to be an interesting experience.  Everyone seems so eager to please and all the staff were seemingly keen to make sure that I felt looked after at all times.  That is great the first couple of times but more than that, it becomes annoying.  Twice is enough.  Three a bit far.  At five, from annoying it becomes fairly aggravating.  Yes – things were good when you checked two minutes ago.  You can go away and leave me alone.  Although, admitting that such behaviour can put me in a fairly uncomplimentary mood, I tried to give the food fair game to shine by itself. 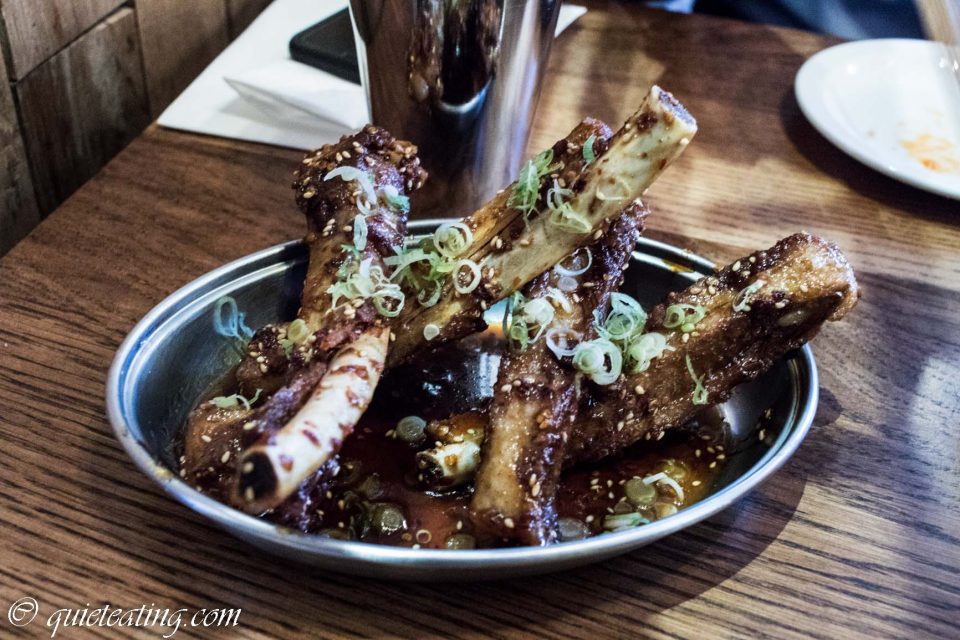 Sweet spicy pig bones, sweet chilli sauce and sesame.  Otherwise known as ribs.  Why did they have to describe them so?  They were ok, nothing special but then again, its kind of hard to mess up ribs.  Although now that I have said that, some catastrophic ribs event is sure to soon befall me. 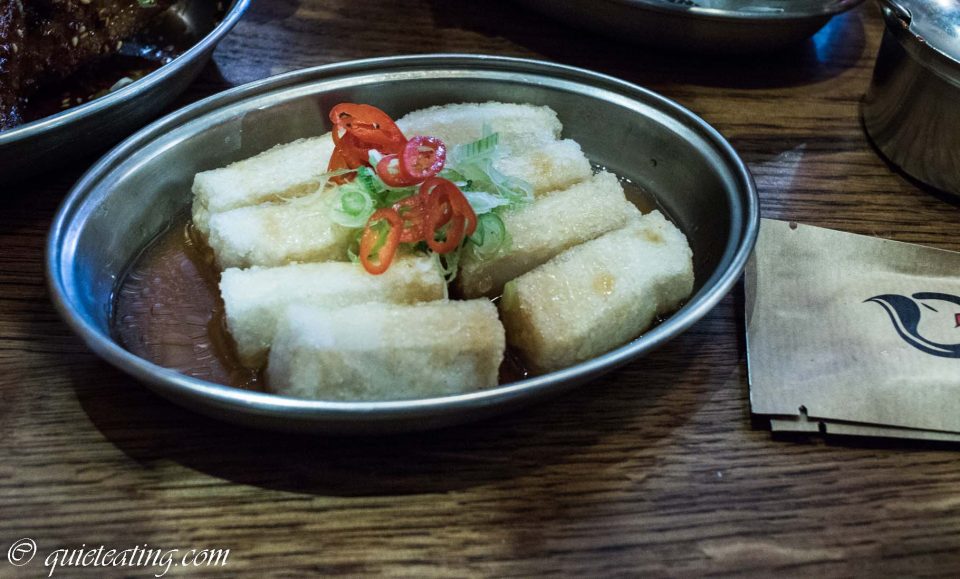 Agedashi tofu, shiitaki dashi, chilli and spring onion.  These were not bad.  Sweet with a light sauce, although the potato batter hadn’t seemed to come off that well as it was slightly spongy to the taste. 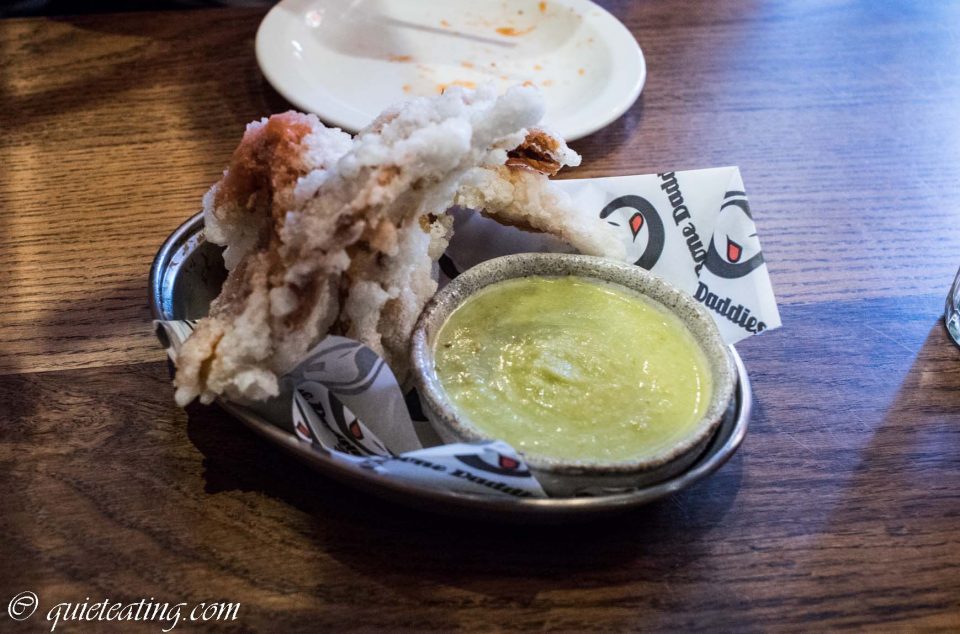 Wild soft shell crab, green chilli and ginger sauce.  Here there was another problem with the batter.  I was in for a surprise.  A surprise because they were, strangely for deep fried food, watery.  This is the first time that I can describe my fried food as too moist but when biting into this, it seemed like the sea which was held back by the batter gushed out all at once.  The sauce was unfortunately rather insipid and did nothing to rescue the crab.  It was like eating fried wet cardboard with green dressing on the side.  At this point, we were accosted again asking if things were fine.  Actually they weren’t but we replied in typical British fashion that things were going fine. 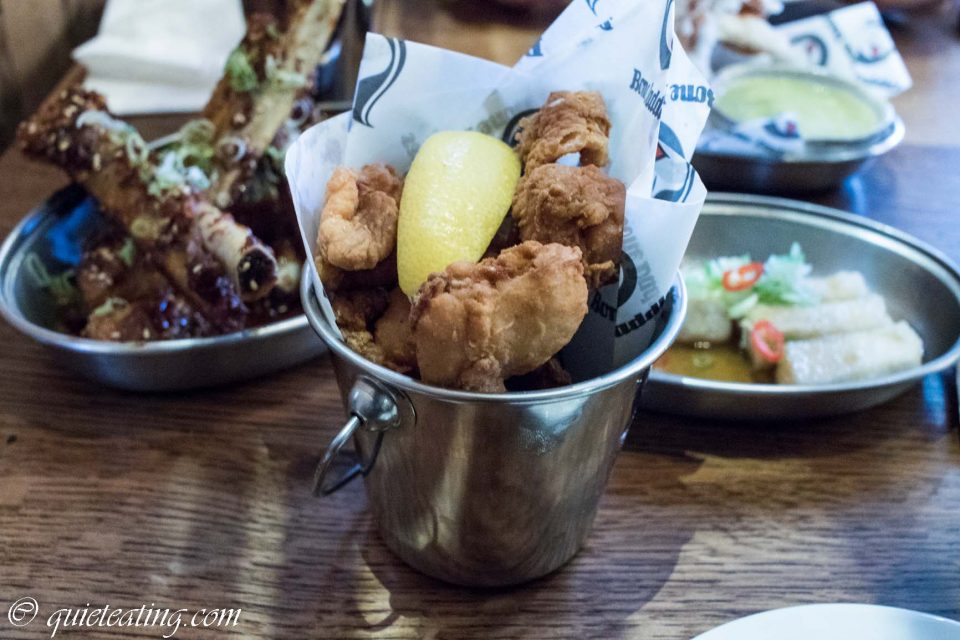 Fried chicken.  The highlight of the meal.  It showed that things CAN go well sometimes.  Crispy and tasty, these were a delight.  Although the more skeptical part of me wondered if its greatness was on account of what had come before.  There was someone (or a timing machine) that could fry food somewhere in the back.  Perhaps, I was just being unlucky as usual and being served at the subpar branch. 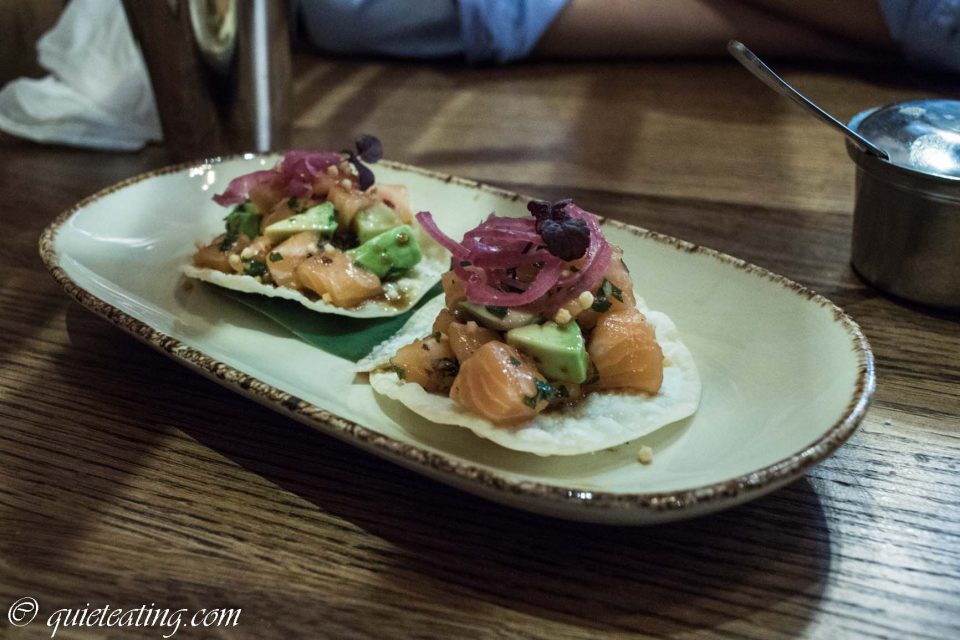 Salmon and avocado tostadas.  With the least amount of manipulation of all the food, these were the best.  Probably because nothing that much had been done to them.  It did make we wonder though, maybe I should try their raw crab.  It was quite good in Japan. 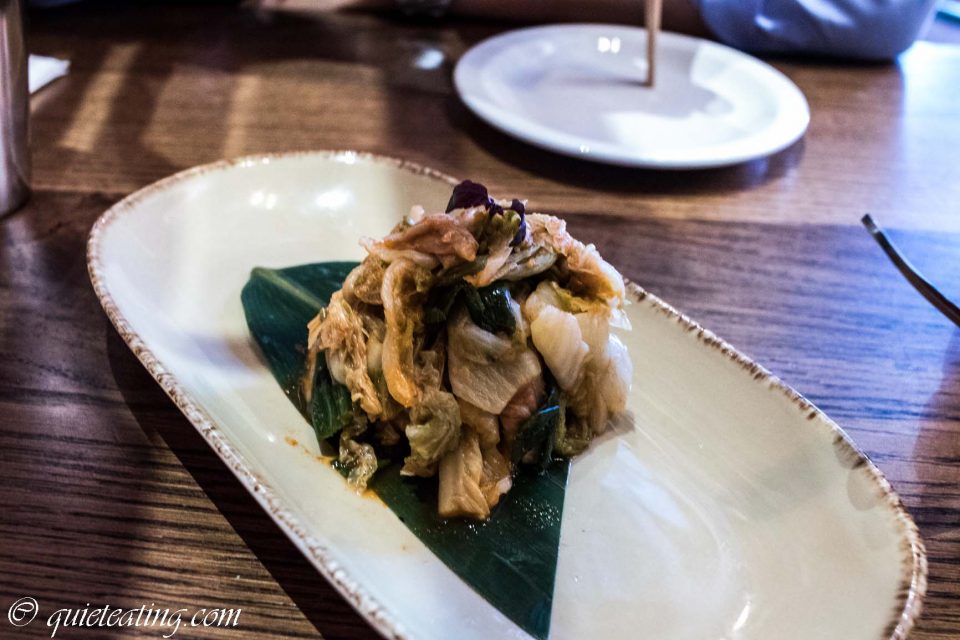 Kimichi.  Decent in that way that most kimichi is.  Although the way the meal was panning out, it may well have come out of a packet. 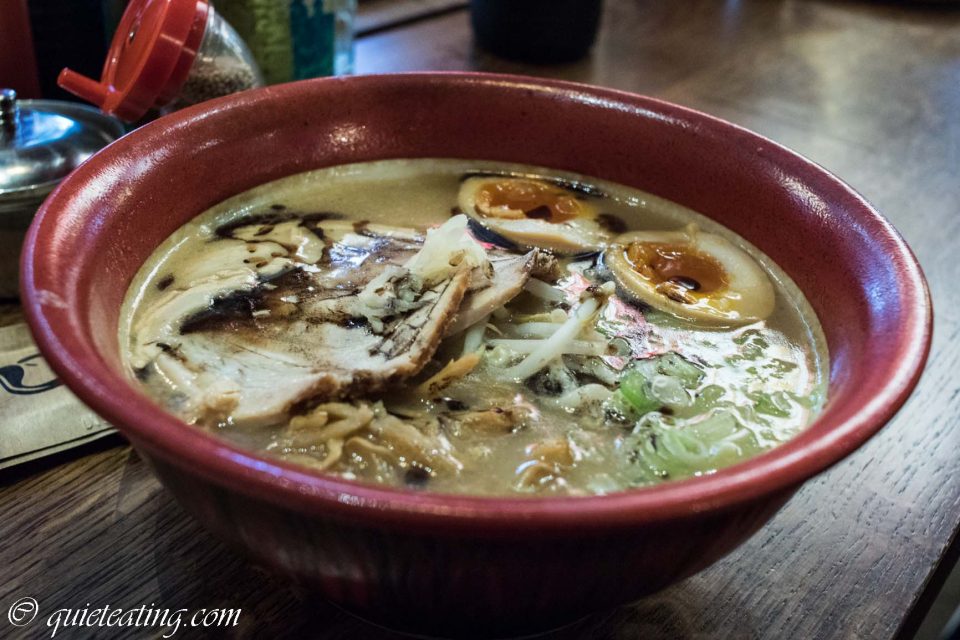 Tonkotsu, charred pork belly, spring onion, bamboo, beansprout and Clarence Court egg.  What is a Clarence Court egg?  I think it’s called hanjuku tamago (half boiled egg), something that is still gooey inside.  Actually, google told me what these are eggs from an exceptional breed of hens.  This proved to be quite a contrast to the rest of this dish, as the ramen was rather oily, flat and uninteresting.  The egg was good, the noodles ok I guess, the char siu mediocre, the soup something best not talked about in polite company.   Although, I guess I should count my blessings.  Thankfully it didn’t come with extra toppings this time, such as string, which happened at another esteemed ramen establishment.  Although, I guess I shouldn’t be surprised given what we had experienced.  As the heralded signature dish of this restaurant, it disappointed hugely but not surprisingly.

Bone Daddies seemed to feel like a ramen joint trying too hard to be a bit of everything.  Hip and trendy with a westerner’s idea of Japanese elements sprinkled around.  The rather sad thing was that everything would have been bearable (if not necessarily enjoyable) before the main event arrived.  If we had just omitted the ramen, things could have been so much better.  It didn’t help that we were constantly harassed by the staff.  Although, I do applaud their careful observation because they stopped just before I lost self-control and let rip with sarcastic remarks.  The result would be less pleasant for the recipient, but as observers sometimes remark, extremely amusing for them.  So if you ask me about Bone Daddies, all I could say is I’m glad you asked.

Lunch (everything above for 2) per person was GBP16 excluding drinks and service.