One thing that often piques me is how people like to critique me on things that they would not do themselves.  This applies to many things in life but for me personally, it tends to congregate among my food critic activities.

I know it is of course slightly unfair to judge a restaurant on a handful of dishes.  Perhaps I might have just picked the wrong ones.  Yet I would retort that anything they keep on their menu must be there for a reason.  If it’s bad, it’s not like anyone is forcing them to cook it! Another charge levelled at me is the unfairness of judging a restaurant by just one visit.  Perhaps they just had a bad day or an emergency in the kitchen.  My response is that one of the things that you would hopefully aim for is consistency in your food.  After all, you wouldn’t accept an excuse that the wrong leg was operated on because the surgeon had an off day.  Eating is scarcely less important.

In an ideal world none of these problems would rear their heads.  Unfortunately, I do not live in a world of rainbows and butterflies where I am paid to review and have time for multiple visits.  Such is the hardship of my chosen hobby.  Woe to me.

Yet even if these two problems are overcome, I would then face a face problem.  People would remember me and suspect something.  Attaining some level of notoriety could cause particular problems when  you are trying to engage in undercover and anonymous testing.  Although, perhaps I should grow some facial hair.  That might help.

However, I choose to instead wear these less than complimentary remarks as a badge of honour.  As I just can’t reasonably do anything about it.  I also console myself with the thought that fame and success always attracts critics and I should know this best given my hobby to provide unsolicited commentary.  So perhaps it serves me right.  Finally though, I would like to point out that at least I am aware of my own hypocrisy.  More than I could say about many people.  Anyhow, moving swiftly on. 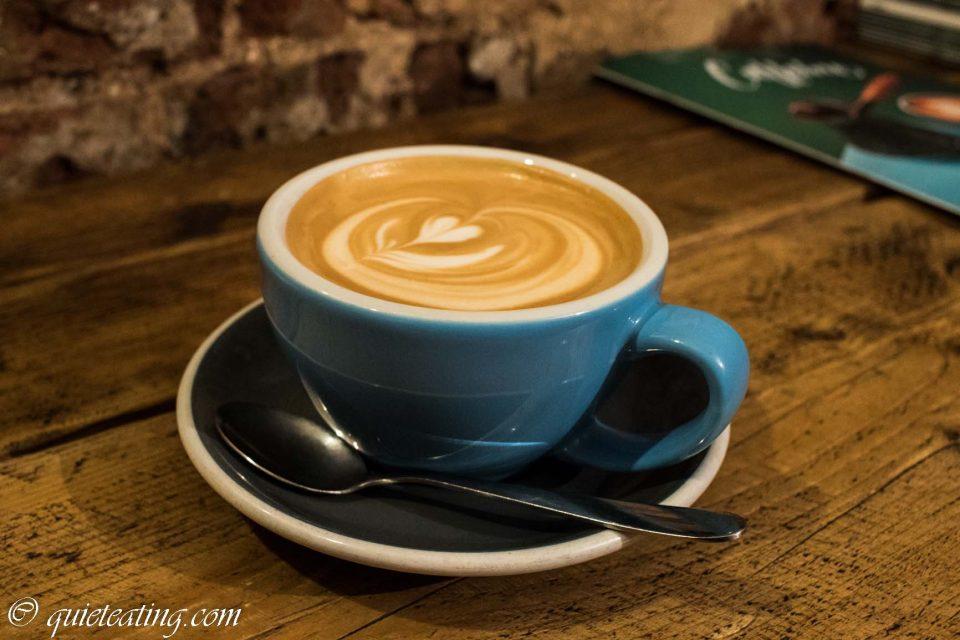 A latte.  To pre-empt charges that I am an uncultured coffee barbarian, yes – this does include milk.  I also admit that I drink coffee with sugar.  Most of all, I admit to not preferring that curdling bitter taste.  This was a great coffee on all accounts.  No burnt taste, smooth coffee taste and lush milk foam.  A delight to the palate.  I will have to make sure to try the other items on display next time to give a more fulsome review.

The Gentlemen Baristas is a small and cosy place.  Wedging myself in the back for a coffee break, I must say that I was very pleasantly surprised.  Only a few hundred metres away from Monmouth coffee, perhaps it is the locale which bleeds across good coffee.  Kind of like the times I tried to sleep on my text book in hopes that by a process of osmosis, the knowledge would seep in. It is a nice place to relax with wooden furninishing and artfully worn counter tops and chairs.  Best of all, I think I’ll be back several times to make a more fulsome assessment so I can address at least one of the various complaints often levelled at me.  I would do that more, well, at least when it’s priced like this.