I have much to be thankful for during this visit.  As although it was an exciting event, for once, such excitement did not concern me.  As you may have summarised by reading my blog, much glee is to be had by one particular person who helps me run this blog as food misfortune seems to follow me around.  It makes for interesting experiences, adventures and fascinating asides in my writing.  There was that one time I found glass in my food.  After a polite and British understatement (Sir, there seems to be something a little extra in my food) failed to obtain a result, I had to resort to rather angry words to get a reaction from the restaurant.  Or perhaps there was that time that I found string in my food, not once, but twice.  Seemed like they decided that even in the substitute dish they couldn’t hold back.  Or even the time when I was verbally assaulted by a member of staff.  Great place that that was.  Yet the crowning glory has to be an attempt at grievous bodily harm.  Boiling water and my extremities do not mix well.

Yet, life was good (at least to me) this night.  As such unfortunate events happened to others, not me.  Although whether you could call bad food an unfortunate occurrence, is up to whether you wish to define the term rather broadly. 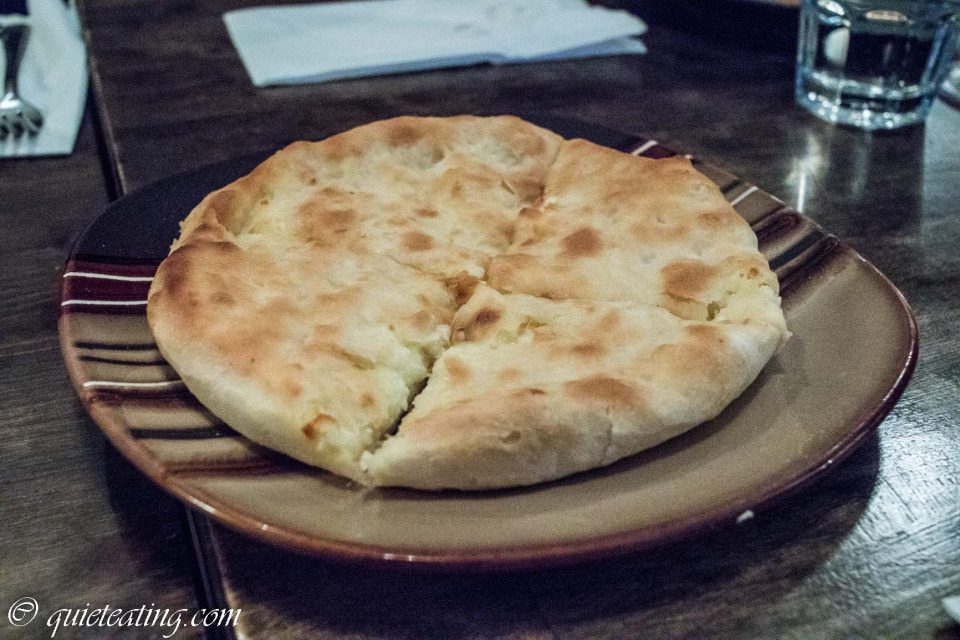 Khachapuri, traditional cheesebread stuffed a special blend of cheeses.  Although I was apprehensive at first, thinking that the cheese would just coagulate into an rather putrid mess, I was to be proved wrong.  This was actually rather good and the cheese blend was light and delightful. 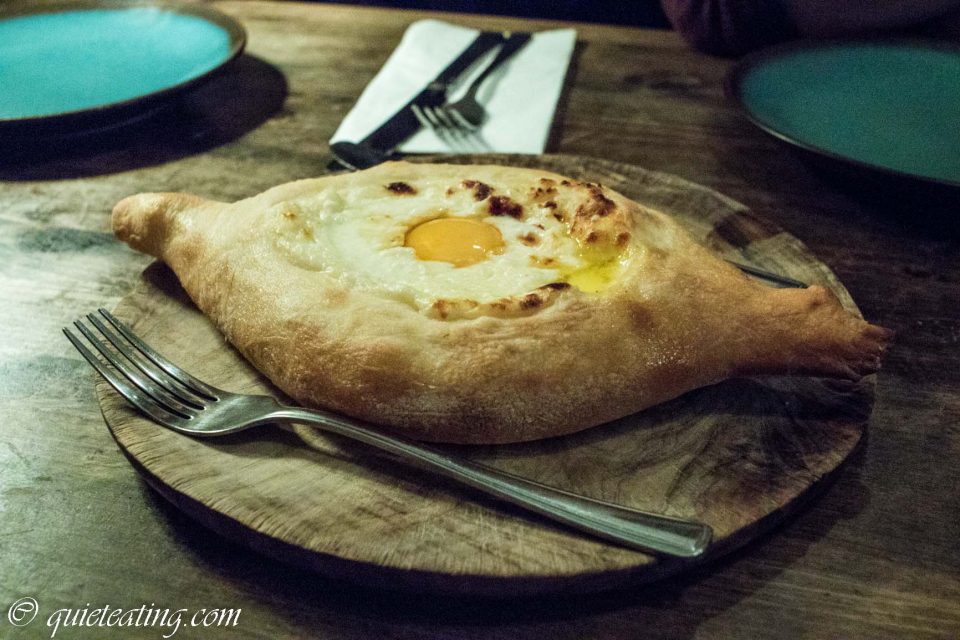 Adjaruli Khachapuri, a combination of cheeses baked in a bread boat topped with egg and butter. With the sauce in the middle, we did play a Jenga like game of seeing how much of the bread we could pull out before everything came tumbling down (or in this case, spilling out).  It was delicious in a lighter way than the previous bread. 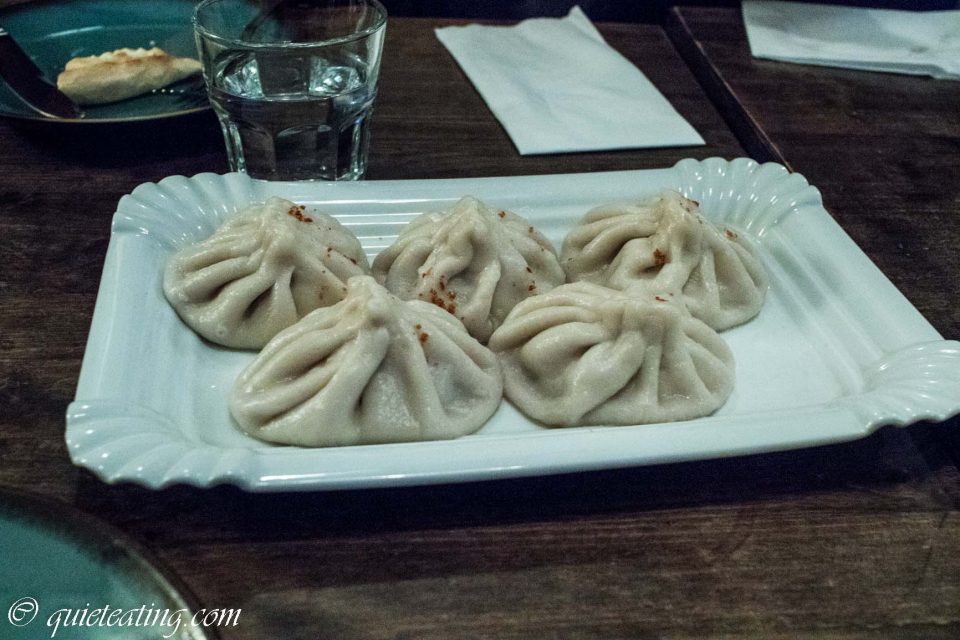 Khinkali, traditional Georgian Dumpling filled with pork & beef minced meat. Reminded me of siu mai, Chinese pork dumplings.  These were hearty dumplings filled with generous meat portions.  Not bad although the wrapping was a tad too thick. 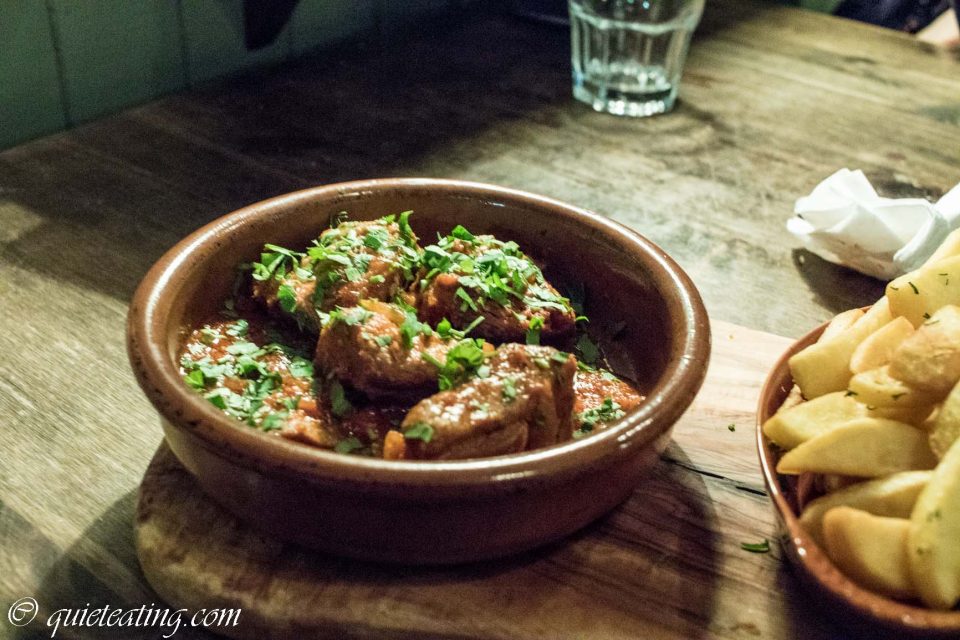 Mtsvadi, Marinaded roast pork kebab cooked in a rich tomato sauce, with spices. Served with chips and plum sauce.  It was here where things started to go downhill, or perhaps I should say on the floor.  The dish is supposed to be accompanied by tomato puree.  You may note from the picture that this seems to be absent.  That is because it was on the floor.

On its journey there, it travelled down the trouser leg of the person seated next to me.

To clarify, this was the waiter’s fault and not the result of an errant issue by the diners.  My friend was particularly magnanimous as he said to the waiter that  these things happen.  On a positive note, you could say that he got a bit of value for money at dinner, as he had some unique artwork added to his clothes.  All gratis. 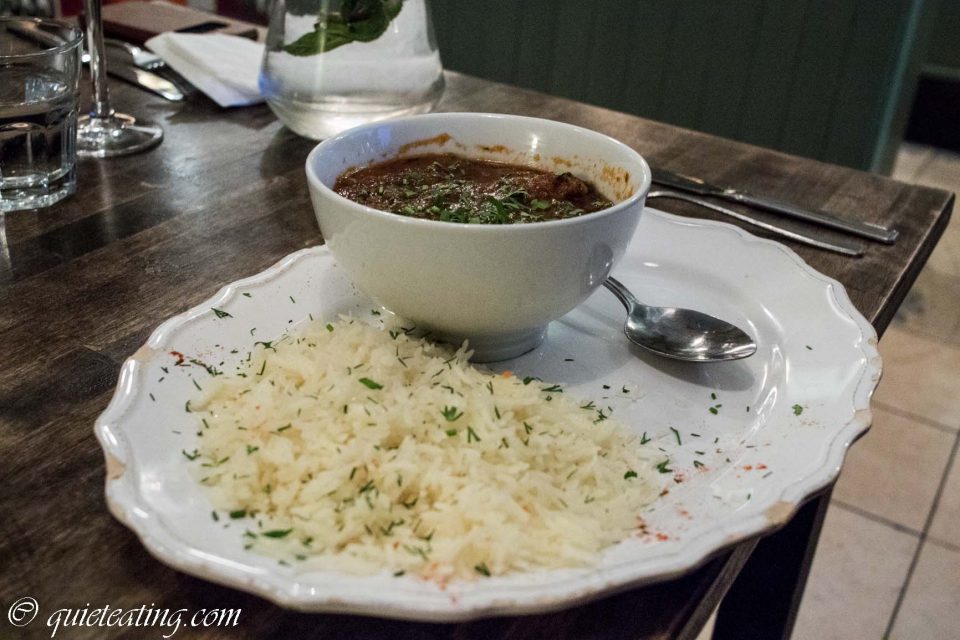 Chashushuli, tender beef stew cooked in a red ajika & tomato sauce, seasoned with Georgian spices and rice.  This was acceptable if not particularly memorable.  I couldn’t really taste anything to really distinguish it from other ordinary stews I have had. 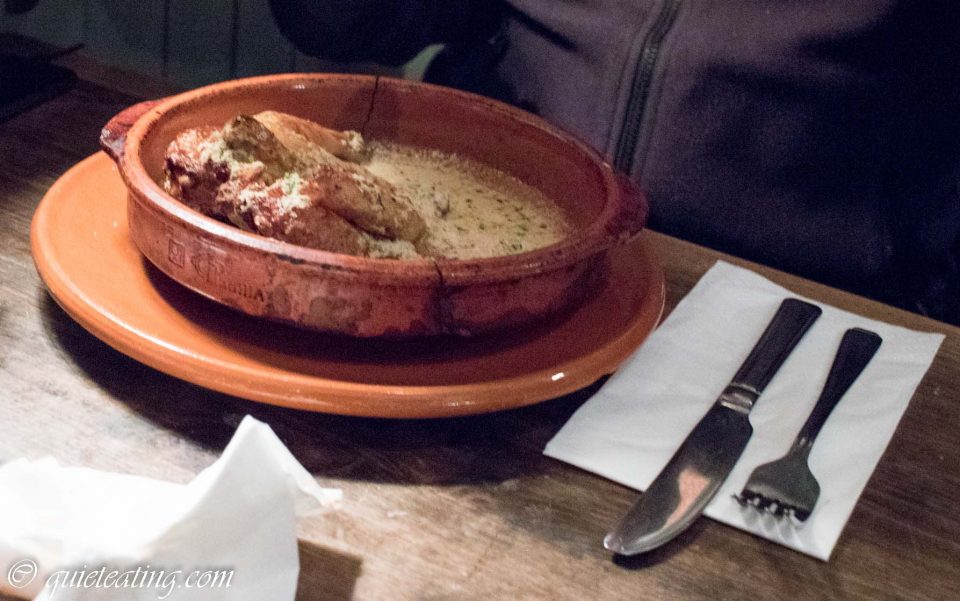 Chkmeruli, pan fried poussin served with rich garlic and walnut sauce served with homemade bread and tortilla wrap.  A little more original, although sadly tasted just like chicken.  Which isn’t really a surprise as poussin is a young bird.  The sauce was good though. 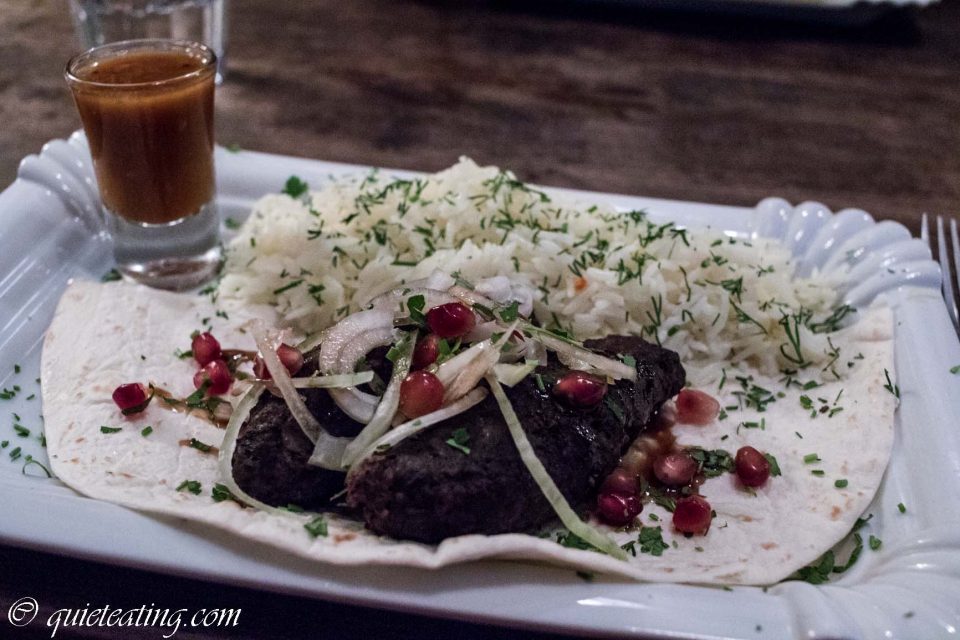 Kababi, lamb kebab seasoned with basil and mint, topped with pomegranate. Reduction, fresh onion and parsley in a spicy tomato sauce on a tortilla wrap and served with rice.  Although I did manage to have the tomato reduction where it was supposed to be for this dish.  Sadly though, this was about the most positive element of this dish.  As the kababi was cold, hinting at unskillful use of the microwave.  If you have to use re-heating methods, at least have the good grace to make sure that it works properly… 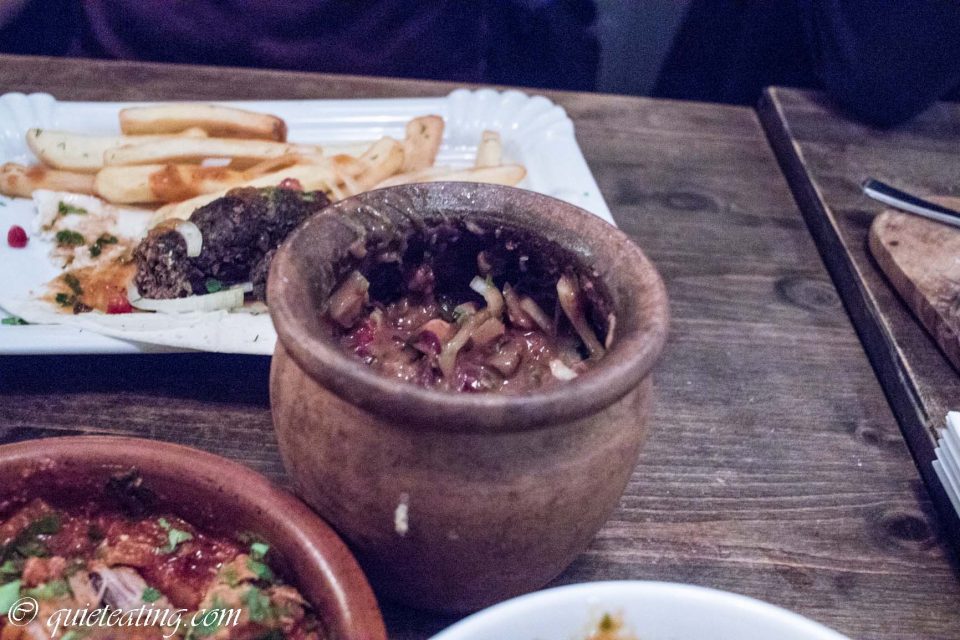 Kotnis Lobio, traditional Georgian bean dish cooked with Georgian spices served with pickled vegetables and homemade bread.  Quite meaty in taste but still sadly average.  I’m not sure I entirely agree with the presentation either.  In my experience, clay pots are usually used for plants or things which are altogether rather unappetising.  Guess it was kind of suitable in this case. 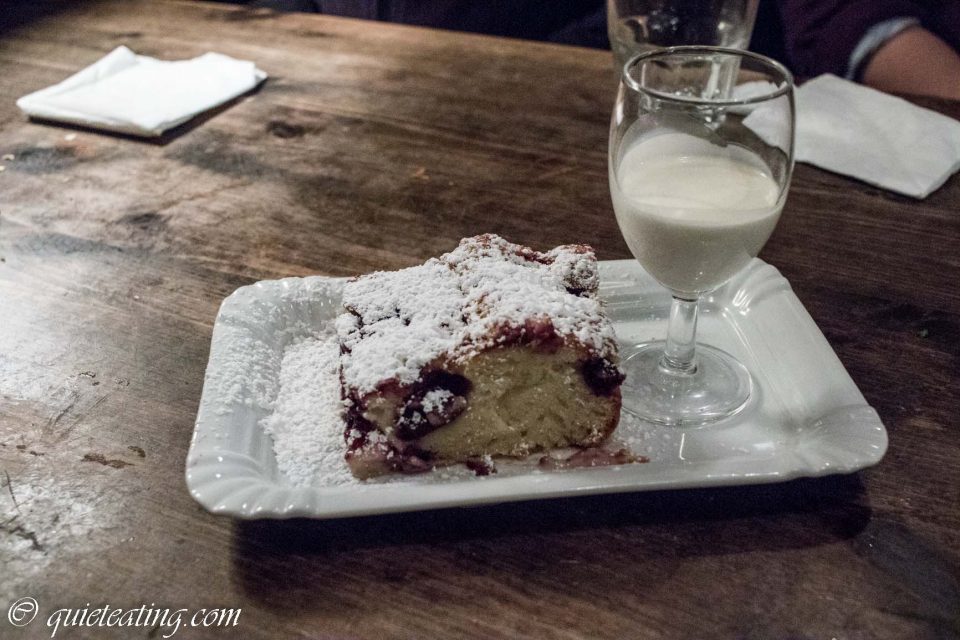 Cherry cake.  With a liberal dusting of icing sugar, this was actually good.  A while ago, I learnt the danger of icing sugar.  As if you bring it close to your mouth and then inhale a breath through your nose, a world of pain will soon blossom into being.  Learning from such experience, I am particularly wary of eating things like this without excessive caution.  The cream in the cup also helped to stick things together and when I carefully manged to get it to my mouth, it was worth the extra prudence. 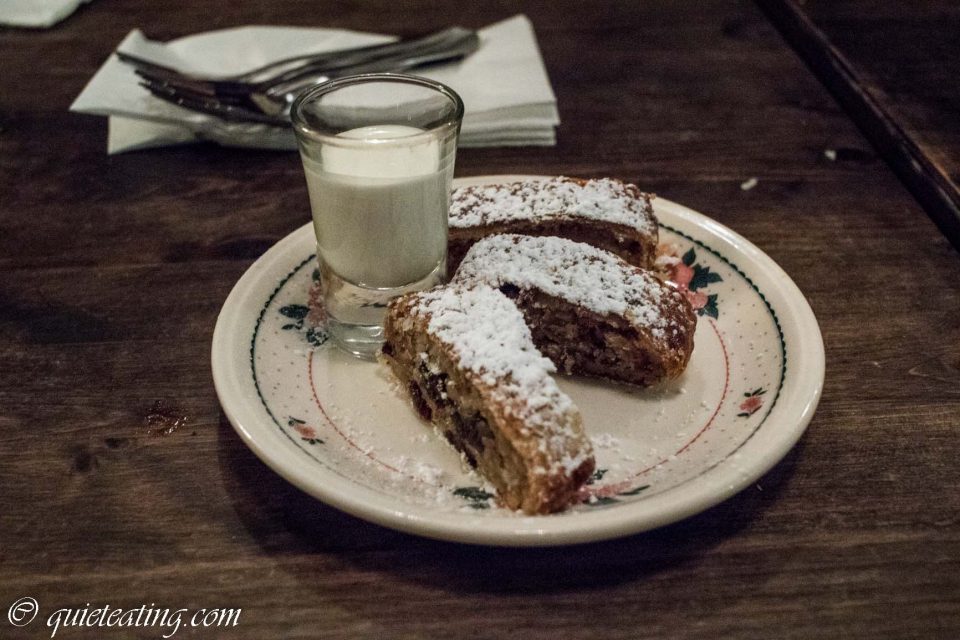 Walnut pastry.  This was also not bad and was different even if it looked very similar to the cherry cake.  With a nutty, rather than fruity centre, this again was something worth having again.

Things in Little Georgia seem a little strange.  The starters and desserts were good.  The mains less so.  Although that is maybe made up somewhat by the unexpected entertainment.  As people remind me, I should try and look on the positive side of things as I should be thankful that, here, the excitement did not involve me and instead, I was merely a spectator.  Too bad I couldn’t say the same thing as for eating the food.  I would have been happier then.