There used to be a time when cheap steak was rare.  That was in the days before Flat Iron and Hawksmoor.  Now that that is not the case, Le relais De Venise, offering a no choice menu of salad, bread, steak and fries really has to work to bring in the crowd.

On a Tuesday night in the city of London, it was quiet.  Very quiet.  It almost seemed like was no one around.  Now I understand why restaurants in the business district in London are screaming for help.  There just isn’t much foot fall to be had.  Even if you had the best food in the world, if there is no one to eat it, that brings entirely foreseeable difficulties. 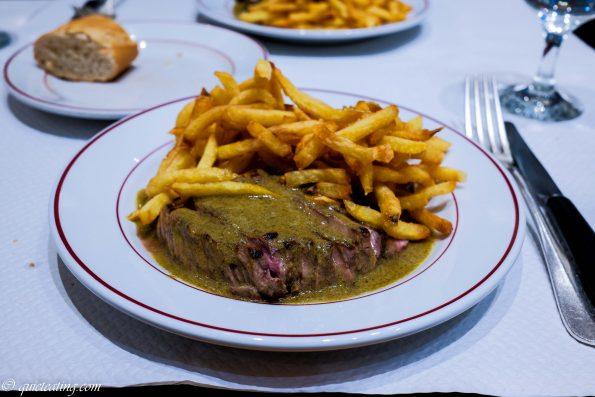 Grilled beef steak accompanied by golden and crispy French fries and the famous sauce.  As for the steak, it was decent when combined with the sauce.  The meat could have been a bit more flavourful though.  The fries were crispy and delectable.  However, I felt a bit hungry at the end as it seemed that the second serving of steak was much reduced.  Feeling somewhat out of pocket and with stomach unfulfilled isn’t a good way to end.  We could have ordered some dessert but the flickering lights were causing us to develop rather bad migraines.

In this inflationary environment, I have heard people say that restaurants have no choice but to increase their prices.  Yet, that only encourages everyone else to follow suit.  To combat this issue, what I can do though is become even more picky about food (if that is even possible).  If the food costs mean that going out costs an arm and a leg, discernment is your friend.  Maybe don’t be as annoying choosy as me but perhaps a tad more than you would otherwise be.  This is my long-winded way of saying that as for Relais, I think there are better places to put your hard-earned money.