Greyhound Cafe offered significant verbiage on its website and its menus.  The menu in particular seemed to consist of verbal diarrhoea which I hoped would not translate into the literal version.  Thankfully that was something which was avoided.

Putting such nauseating things aside, we turned up to the cafe and were shown to our seats with a vague wave.  Would have been nice to have been shown to our seats but the waiters had more important things to do in this almost entirely deserted restaurant.  This service quality was to prove consistent throughout the day requiring us to leave our table and accost waiters for service.

I’ve generally had a less than thrilling experience with Thai food in London, so when a friend continuously waxed lyrical about this place, I felt that I had to give it a try.  So after waving frantically for service, we finally were able to order. 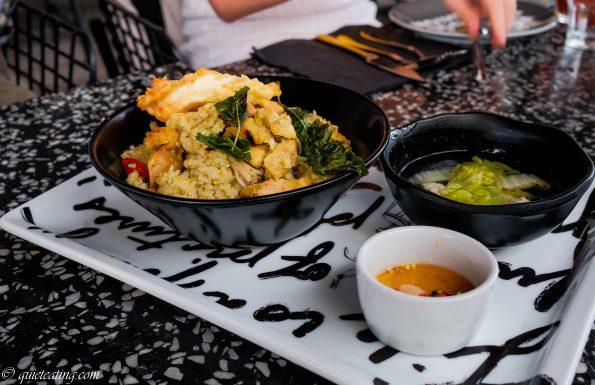 Thai spicy green curry with a twist and chicken.  I’m not sure what the twist is here.  The rice seemed a bit too soggy, the chicken breast rather dry and boring and the rice itself seemed like it was only lightly brushed with green curry sauce.  The soup and pickles didn’t really help at all.  Maybe the twist was that it would taste worse than it looked. 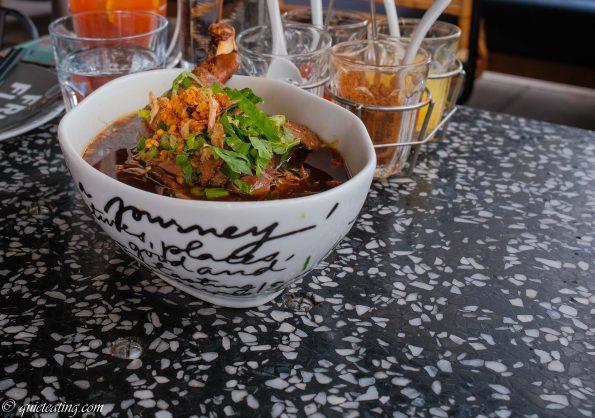 Street style duck noodle soup.  This was at least a generous helping of duck leg.  However, it didn’t really taste of that much.  The soup was bland.  The noodles were bland.  The duck was… meaty but bland.  It tasted like it had been sadly overboiled, not so much that its flesh couldn’t hold its consistency but instead like its flesh had all of its flavour leeched out. 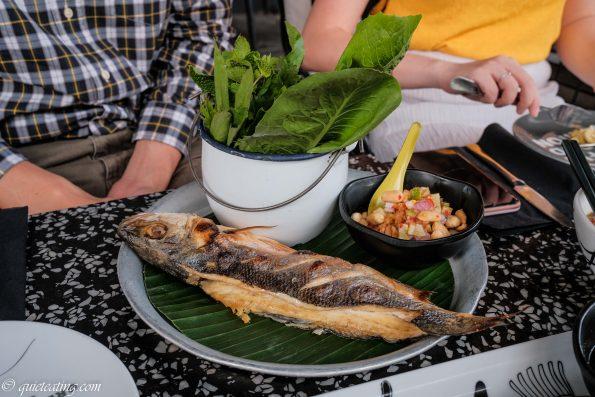 Sea bass Miang.  With herbs and leaves and a small salsa dressing this was, somewhat insipid.  The skin was not really that crispy and the meat left much to be desired.  It tasted almost as if they had put all the flavour in the dressing but then just left it off the fish. 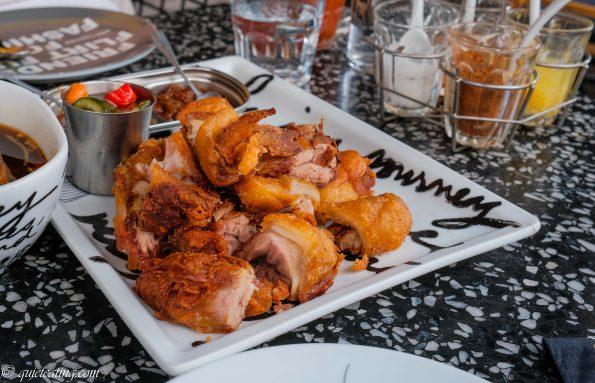 Hot oil pork knuckle.  I’m not sure how hot the oil was here or instead if this was a recycled dish.  I was disappointed as the skin was not crispy.  Instead, it was chewy, fatty and somewhat lukewarm.  Suspiciously like it had sat under a heat lamp for quite a while.  My disappointment was compounded by the anticipation of crispy pork skin but then depressed with something flaccid turning up. 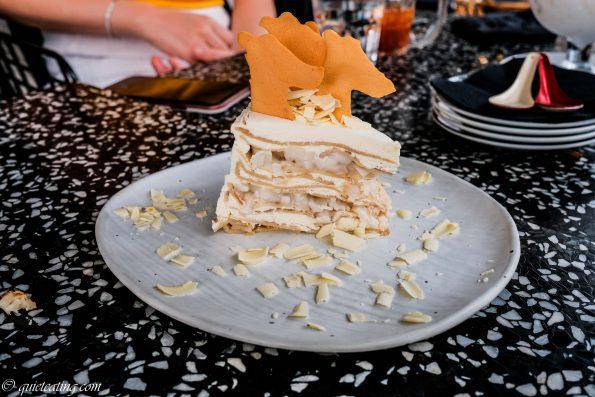 Young coconut crepe cake.  A rather weird dessert, with what I can only guess was giraffe heads on top, I couldn’t really make tails (or heads in this case) of it.  Decorated with coconut flesh on the outside, it was kind of weird in a bad way. 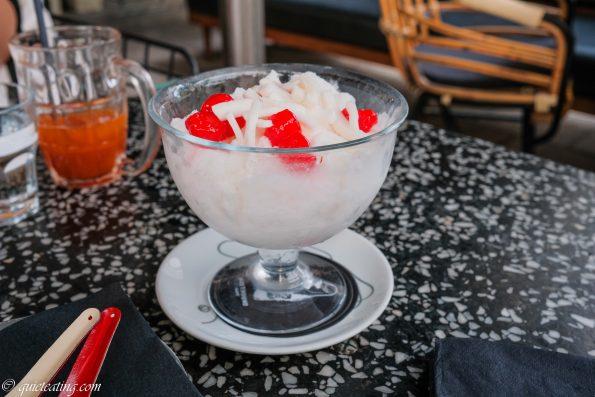 Red rubies tub tim krob.  Probably the best dish of the day, water chestnuts with tapioca flour, it was better than what had come before.  Marginally.  Which made it the best dish of the meal.  Congratulations!  Or probably as the staff might say, congrats, as the full word takes a bit too much effort.

Throughout the meal, service was great.  In that it was non-existent.  When you could get their attention, it consisted of them ditching everything on a corner or your table and then expecting you to serve yourself.  I think you kind of pay the service charge to have someone, you know, serve you.  Lazy person that I am, it would be nice to have the utensils put in my general locale rather than all the way across the table.  Then again, maybe that’s the point, as the food wasn’t something to rush for and I definitely won’t be hurrying back.