Lahpet serves Burmese food.  In my usual ignorance, I had to resort to the computer to find out what this was.  As Google explains, Burmese food that is a fusion of Malaysia, Thai and Indian.  I’m sure that Lahpet hates been described that way.

I find it particularly irritating when people try to describe things that relate to me by trying to compensate for lack of adjectives (do try to use your words, that’s what school is for) by making comparisons to do away with the need for linguistic dexterity.  Come on people, you are better than that.  Just look at the efforts being made recently to try and re-open the schools!  Can’t let all of that go to waste. 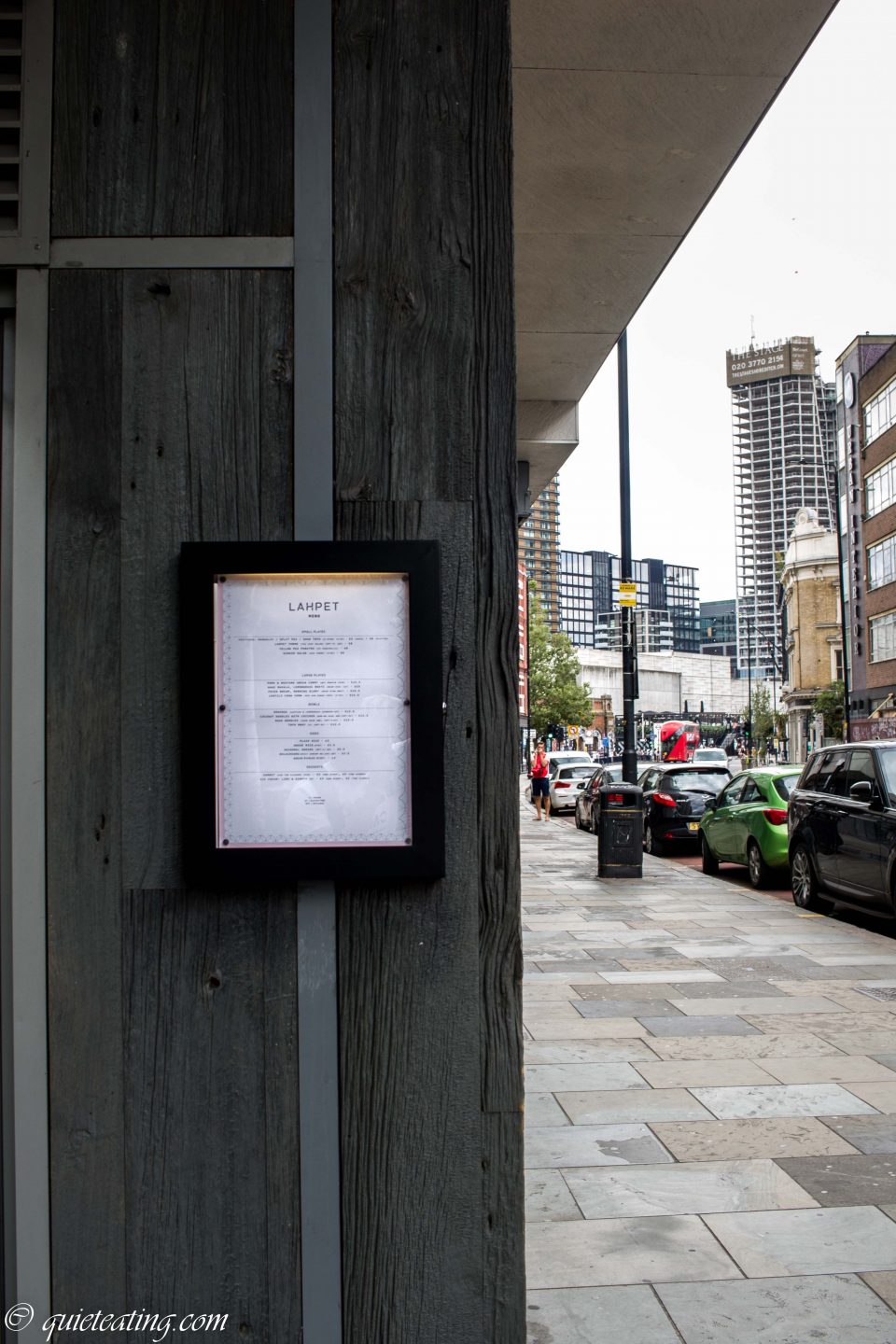 In keeping with the decor of the area, Lahpet fit right in.  It began with an artful wooden exterior on a busy road right in Shoreditch. 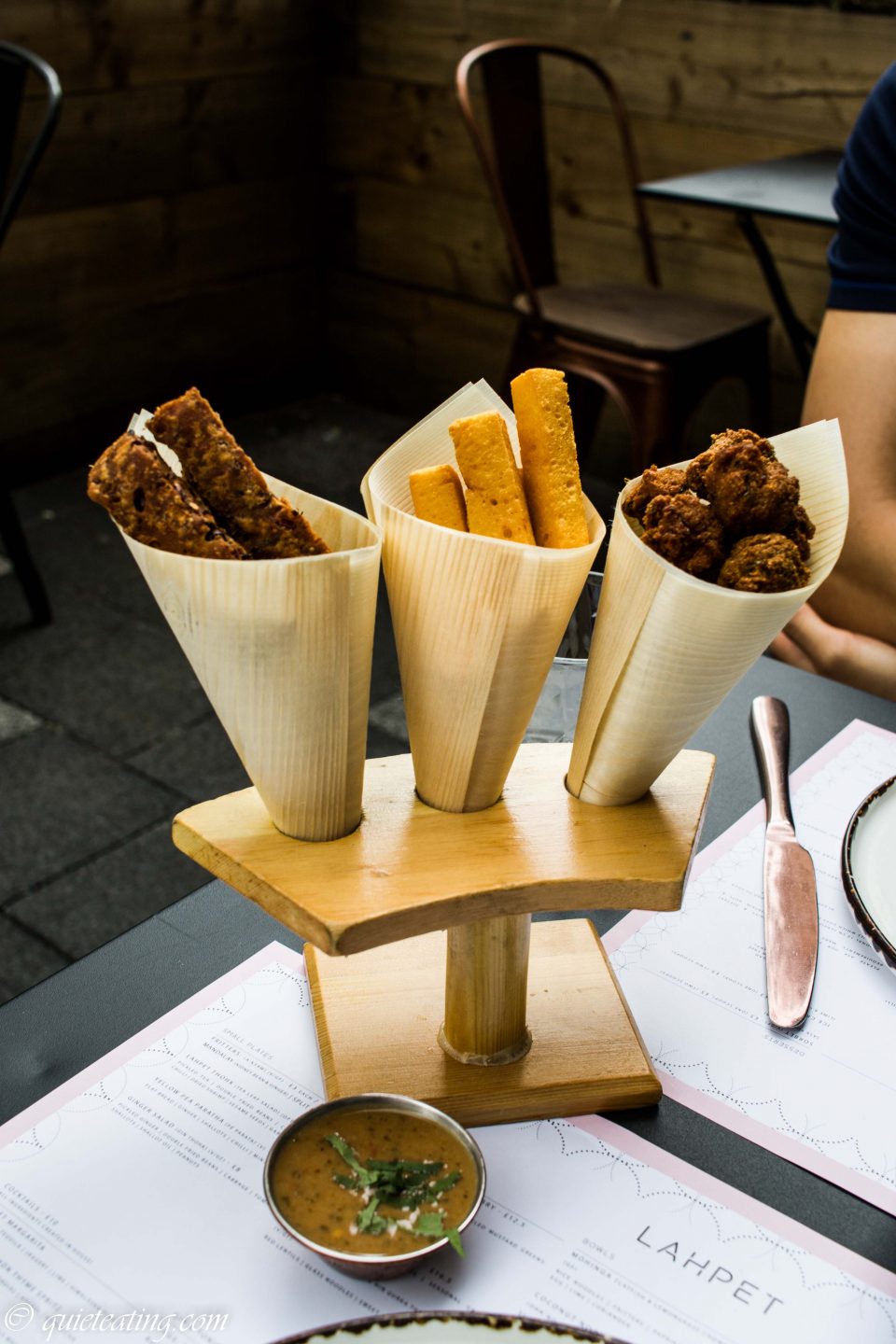 Fritters, mandalay, split pea and shan tofu.  These were rather good.  Delightful, smooth but crunchy, I particularly enjoyed the tofu.  Kind of like a healthier potato wedge. 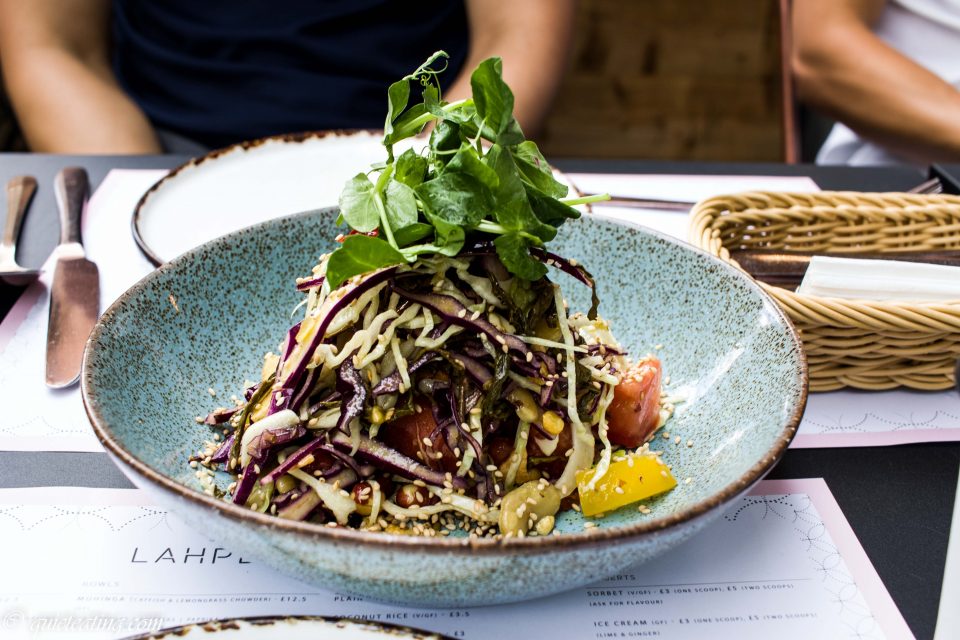 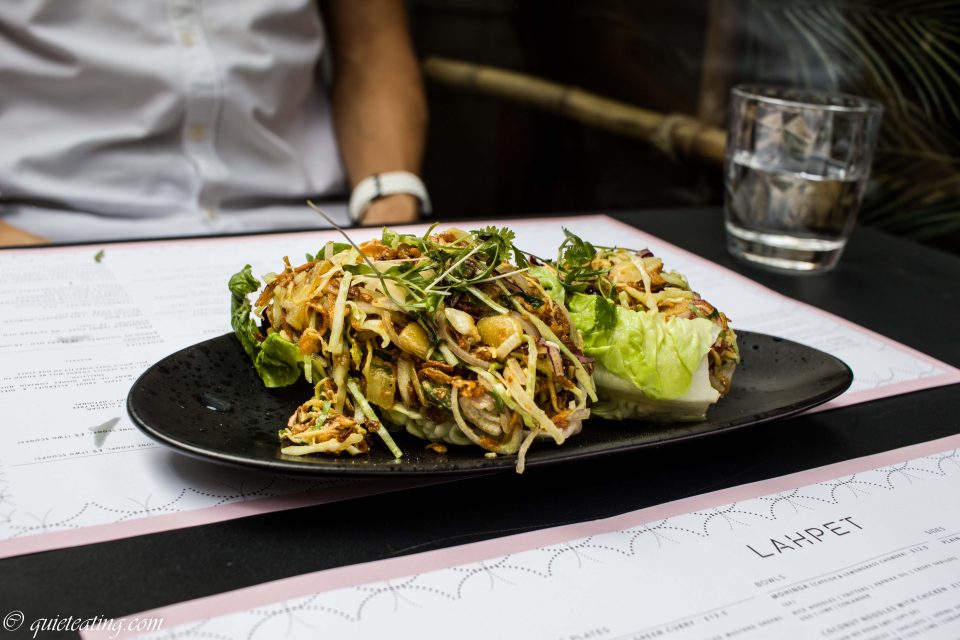 Ginger salad, pickled ginger, double fried beans, cabbage, tomato, shallots, shallot oil and peanuts.  Served on lettuce leaves, these mixtures were particularly easy to shovel down.  A delightful little amalgamation even if a bit dear on the cost-benefit analysis. 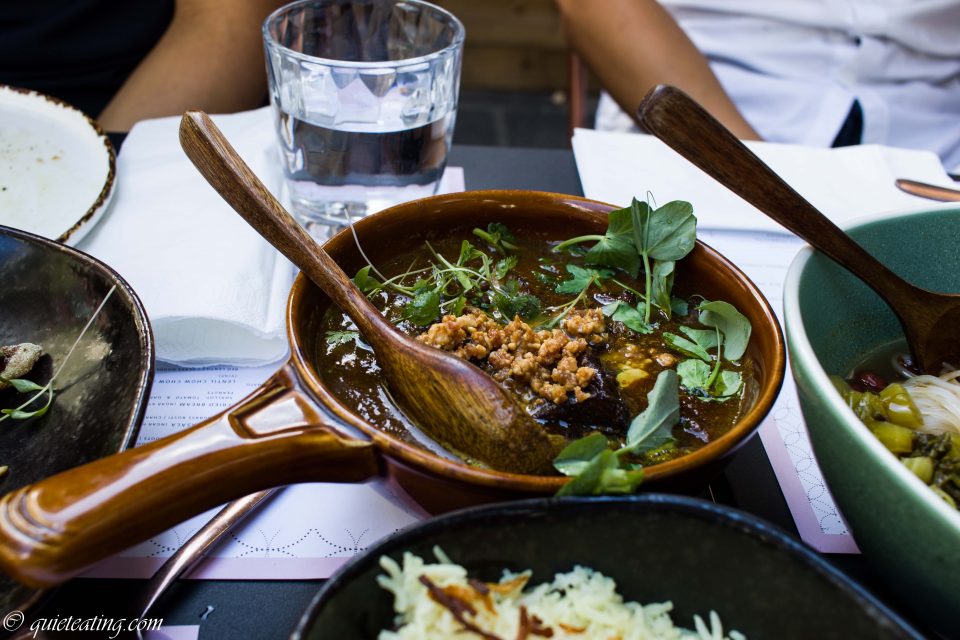 Pork and mustard green curry, slow cooked pork shoulder, pickled mustard greens, star anise, pea shoots and peanuts.  Probably the weakest of the dishes, as it was rather ordinary.  It seemed like a sad hiccup arranged amongst the culinary pleasures and it lacked any real spark. 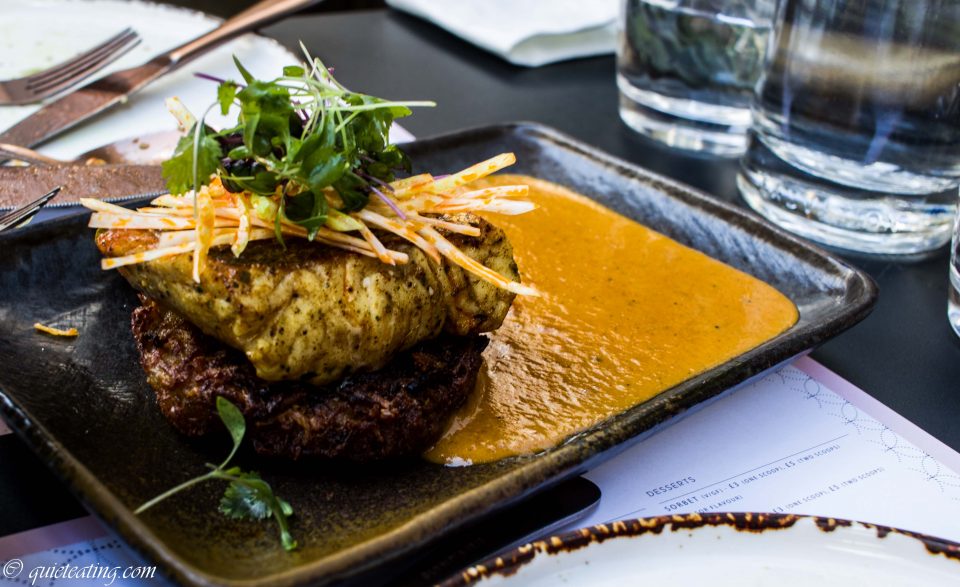 Hake masala, lemon grass rosti and charred lime.  Thankfully this was to be turned around by the next dish.  The fish was juicy and not overdone like other hake I have known.  However, it was the lemon grass rosti which was something novel for me.  It seemed fairly similar to a potato cake with twinges of herbs fried delightfully.  Could have had a few more rostis. 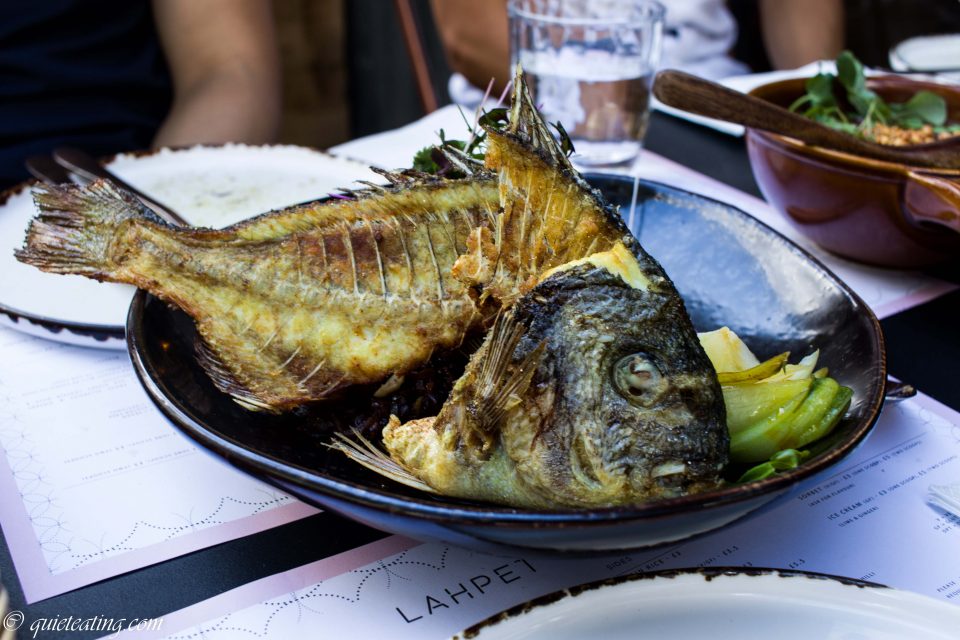 Fried bream, shallots, tomato and garlic glaze, seasonal greens and peanuts.  The highlight of the meal, deep fried but not oily, the chef had managed to make the bones not something to be avoided but something to be searched for as they were crunchy and full bodied.  The flesh was a delight as well as it was succulent and flavourful.  So much so that we couldn’t get enough.  We picked over the head so much that it looked like something the cat got hold of.  Nothing left there. 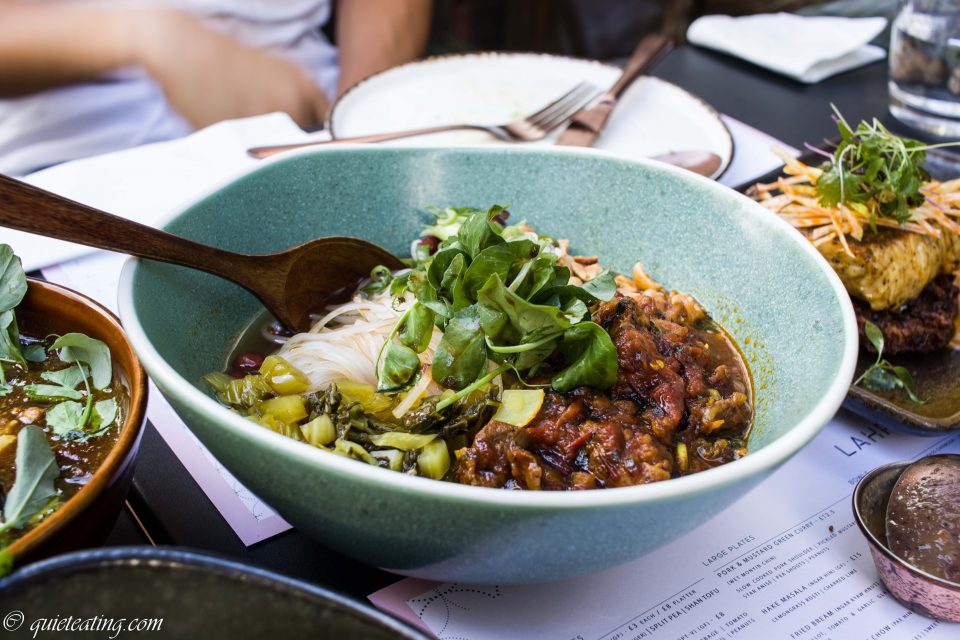 Shan noodles, rice noodles, ground chicken and pork, paprika and tomato, pickled mustard greens, pea shoots and sweet soy peanuts.  Something more ordinary.  Sadly although it looked nice, it wasn’t something special as the chicken and pork mixture lacked oompf (and that’s a real word).  Like the curry, it was a bit of a miss. 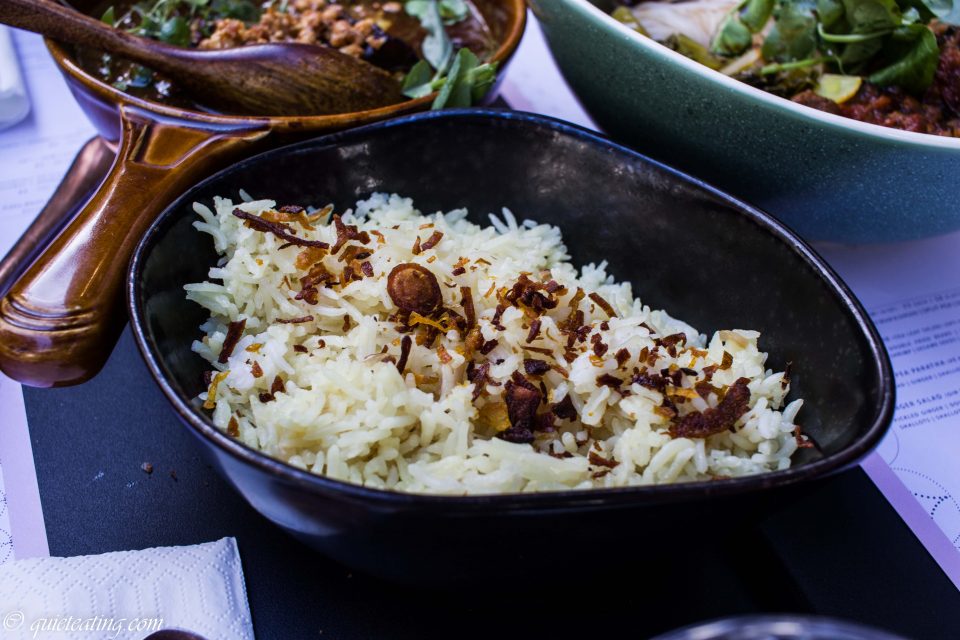 Coconut rice.  Although the fried shallots tried to add something special, it needed more help than that.  Not that it was bad but just that it kind of tasted like rice, with a bit of coconut and shallots.  It wasn’t pretending to be more than it was (unlike some people of this day and age) but it could have been so much more.

Scarred from my previous experience of eating out, I had no expectations.  Which meant that when the food was better than rather low baseline expectations, life suddenly looked very good.  I thought it might turn out something like Som Saa, an attempt to be a cool little Eastern with a Western twist.  Thankfully in this case, it wasn’t a fail even if the price didn’t appropriately reflect the locale.  Putting value aside for a moment, I did have a good time.  So that at the end of the meal, perhaps next time I am faced with Burmese food and the need to compare, I can just say.  It is like Lahpet just not as good.

Lunch (all of the above for four) was GBP22 per person excluding drinks and service.