It seems to be a bit of a trend that Brits disappear off to Asia and then on their return set up shop.

I think that despite the febrile political climate, if Britain closed it doors it would be far poorer in a culinary (and economic) sense.  I wouldn’t say that it would immediately become a culinary wasteland but it would be heading in that direction.  Perhaps that explains what happens in Phuket as you step off the plane to be inundated with cries of various hawkers and the sight of too many sunburnt English citizens.

Such outward facing Brits are to be applauded.  They go out into the world and bring other things back in.  Food, drinks and culture.  They make the UK a better place as variety adds to the spice of life.  Regardless of what people announce on loudspeakers, foreigners aren’t generally setting out to steal the jobs (and women) of the UK.  Sometimes the reason why things aren’t going that well is simply because things aren’t going that well.  Regardless of my fears that Westernised Thai wouldn’t be that good, after prolonged nagging, I gave in and this is how I ended up at Som Saa. 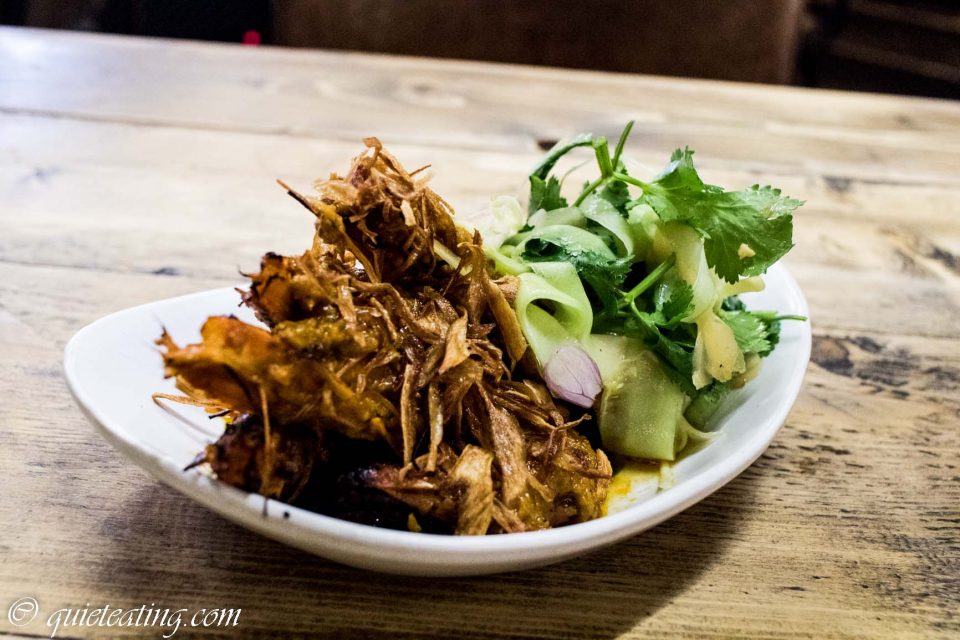 Gung Golae, grilled prawns in a southern style coconut marinade served with an ajut relish.  These were probably the best dish of the day.  Spicy and flavourful prawns with some greens.  Not bad if a bit small. 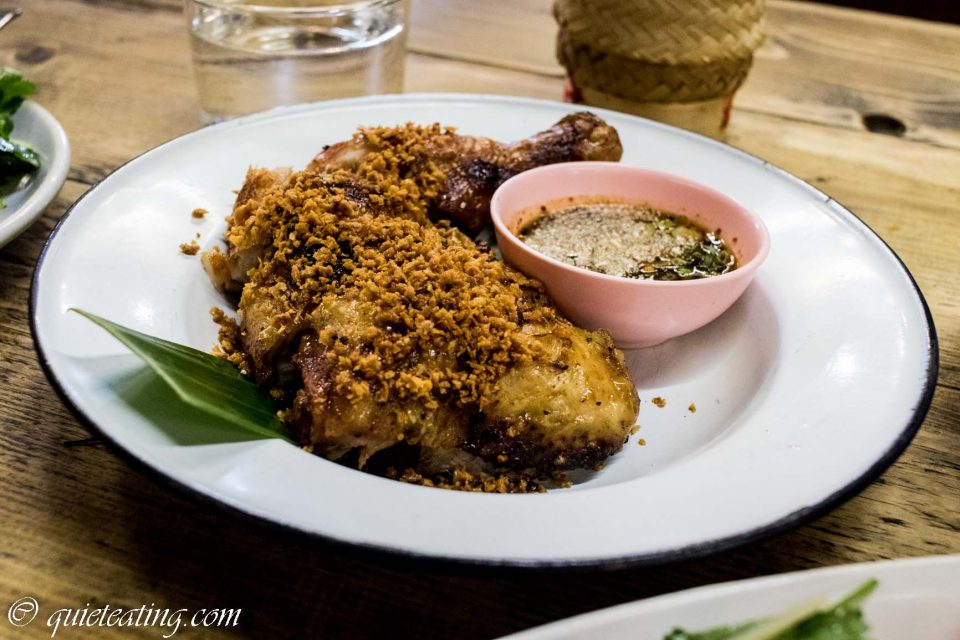 Gai Thort, thai style fried chicken leg with crispy garlic.  Promising crisp skin, this was ok but not particularly flavourful as even with the sauce these were rather insipid.  It was rather boring. 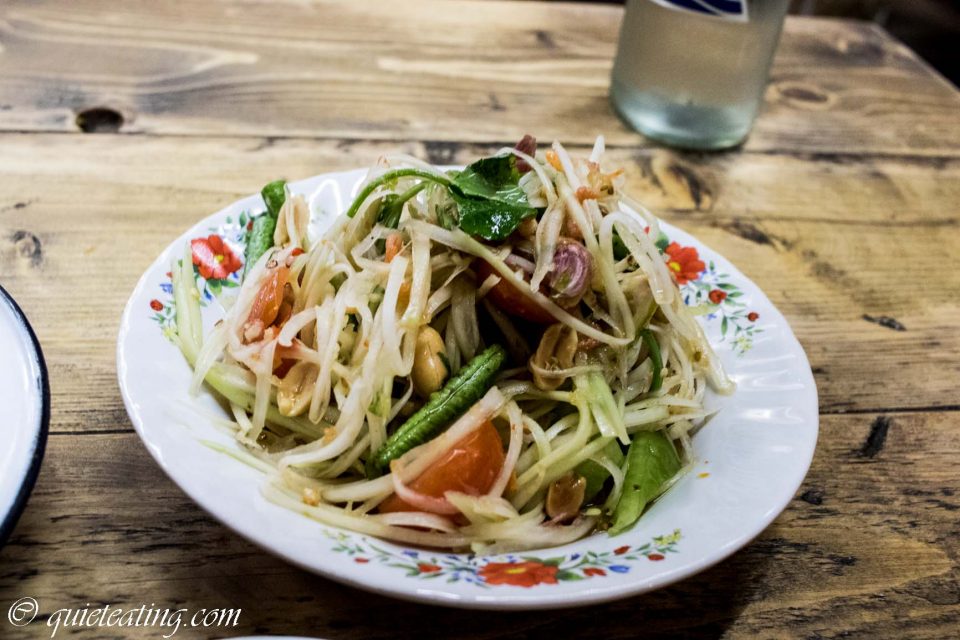 Thai papaya salad.  I’m not sure what they put in this but it had quite a kick that I was not expecting.  The heat was so great that I couldn’t really taste the underlying flavours as pain quickly overcame other sensations.  I guess it was probably good underneath but I would never know. 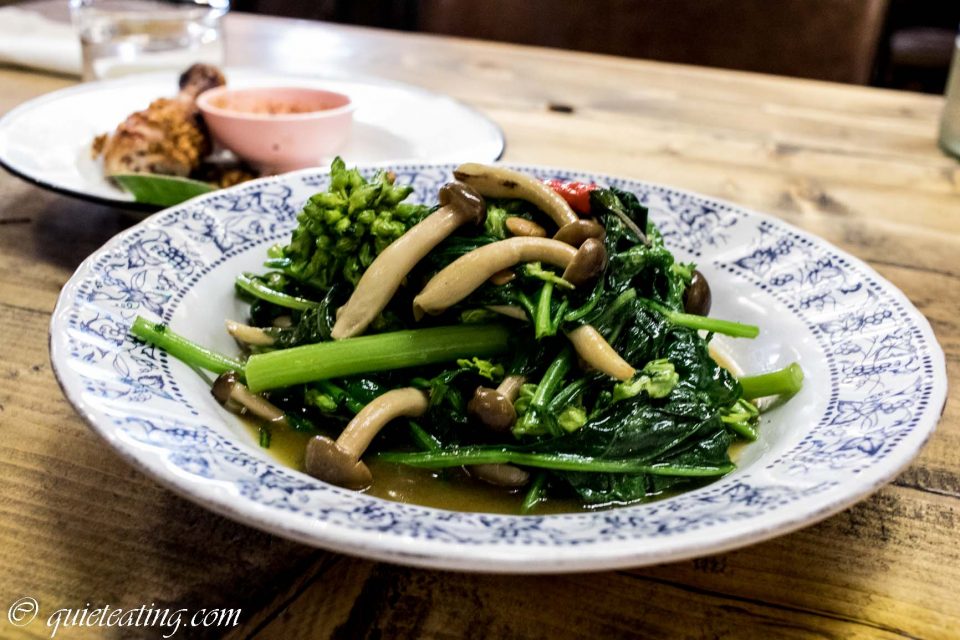 Gaeng Tair Po Jay, red ‘kua’ curry of tofu, morning glory and kajorn flowers with Bengali lime.  Sadly rather bland, it tasted as if it had been carelessly stir fried on the side without much spice.  Quite a shame as this could end up as something rather good.  Then again, perhaps they are hoarding salt in fears of Brexit. 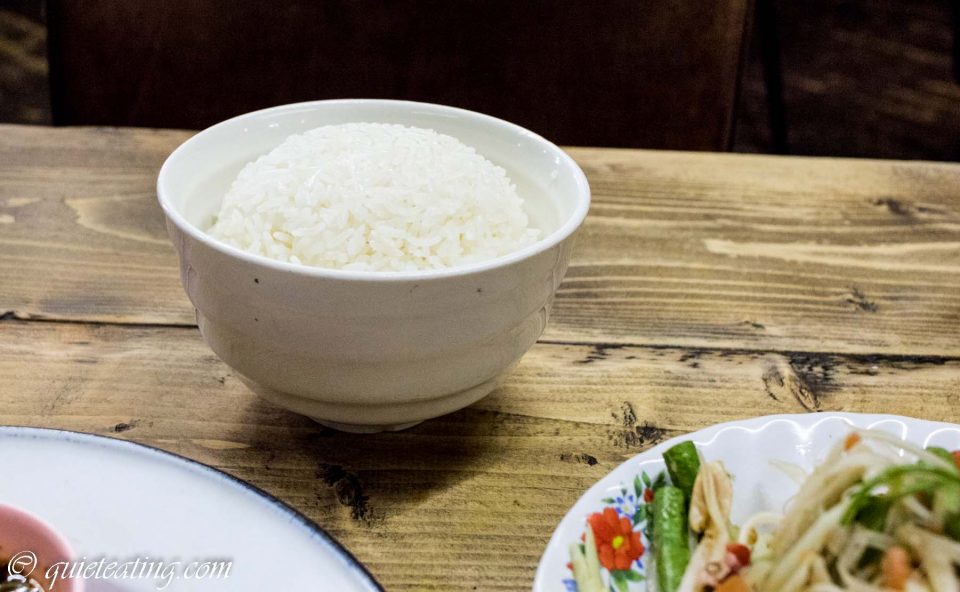 Jasmine rice.  Not much to say about this except it was rather ordinary.

Som Saa is a good idea.  Unfortunately, it just hasn’t been executed that well.  I could see where they were trying to go but it seemed to fall rather far off the mark.  It seemed to strangely oscillate between boring blandness and fiery heat.  The pleasant middle seemed to have been missed.  Then again, in that sense it is a good reflection of current politics.  Life would be much better if I wasn’t an unwilling passenger on the bus being driven off the cliff but that’s another story…

Lunch (2 courses) was GBP25 per person excluding drinks and service.