I was, as I am often, caught off guard.

Although mitigation efforts in other areas of my life seem to fail (maybe time for another type of job), I seek not to let this happen regarding food.  In my attempts to alleviate exciting food experiences, I try to undertake laborious research before showing up at the front door.  Unfortunately, that doesn’t always seem to work.  Exciting events seem to be looking for me.

So please forgiven the rather anemic photos.  I had to make do with my camera phone, suboptimal lighting and rather hungry dining companions.  Although it was a less than ideal situation, I guess that suited the less than optimal meal.

I was sold Shikumen as a decent Chinese restaurant in an upmarket hotel.  A place where the ladies who lunch would like to hang out.  A place with dark wooden furniture, plenty of space between tables and subdued lighting reined.  A place with a rather lengthy menu, perhaps the first clue that things might not go that well.  A mixture of dim sum and other dishes can also sometimes herald a restaurant being a jack of all trades.  In recent memory, the sad demise of quality in Goldmine springs to mind.  When all day dim sum appeared on the menu, everything rapidly went south.  In hindsight, a place to be wary of. 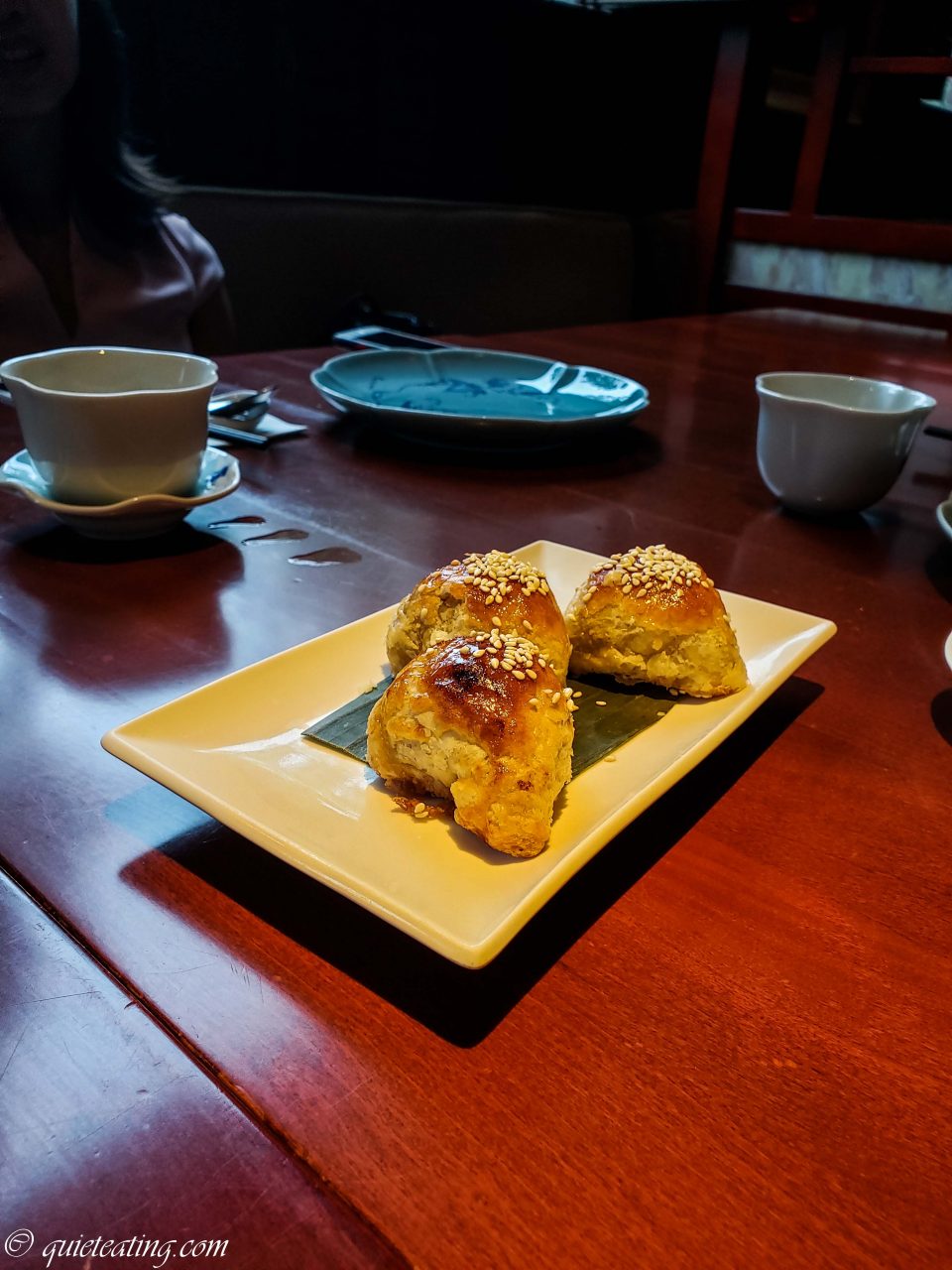 Char siu sou, baked pork puffs.  These were alright, although a bit soggy.  Wouldn’t be the worst I’ve ever had. 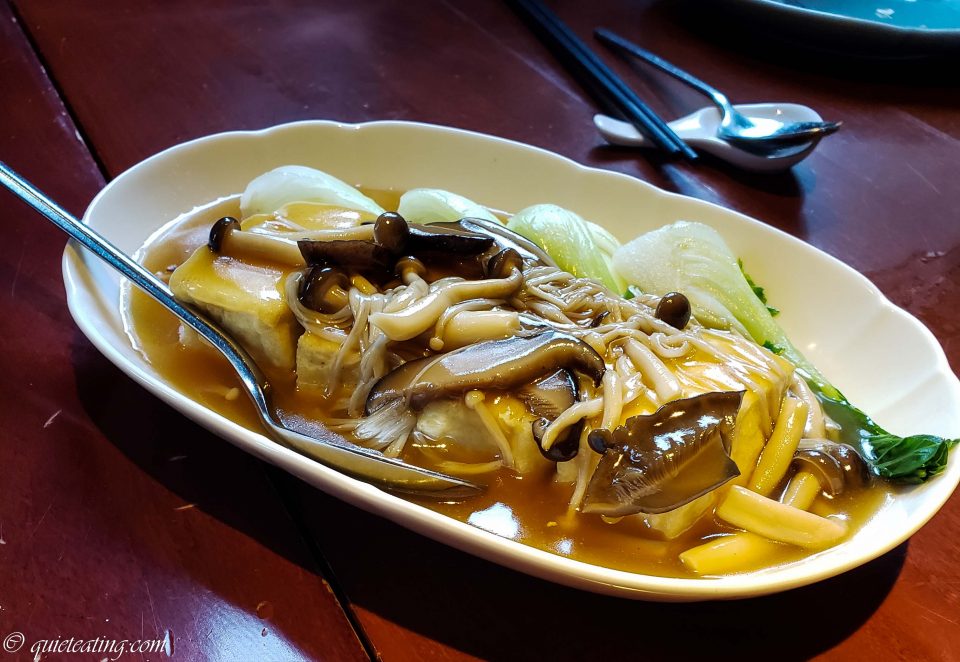 Braised Homemade Tofu with Morel and Wild Mushroom.  Hand made might be seen as a synonym for can’t be bothered.  As this is what the tofu was like as rather tasteless with a rather watery saline solution with limp vegetables on top.  Avoid. 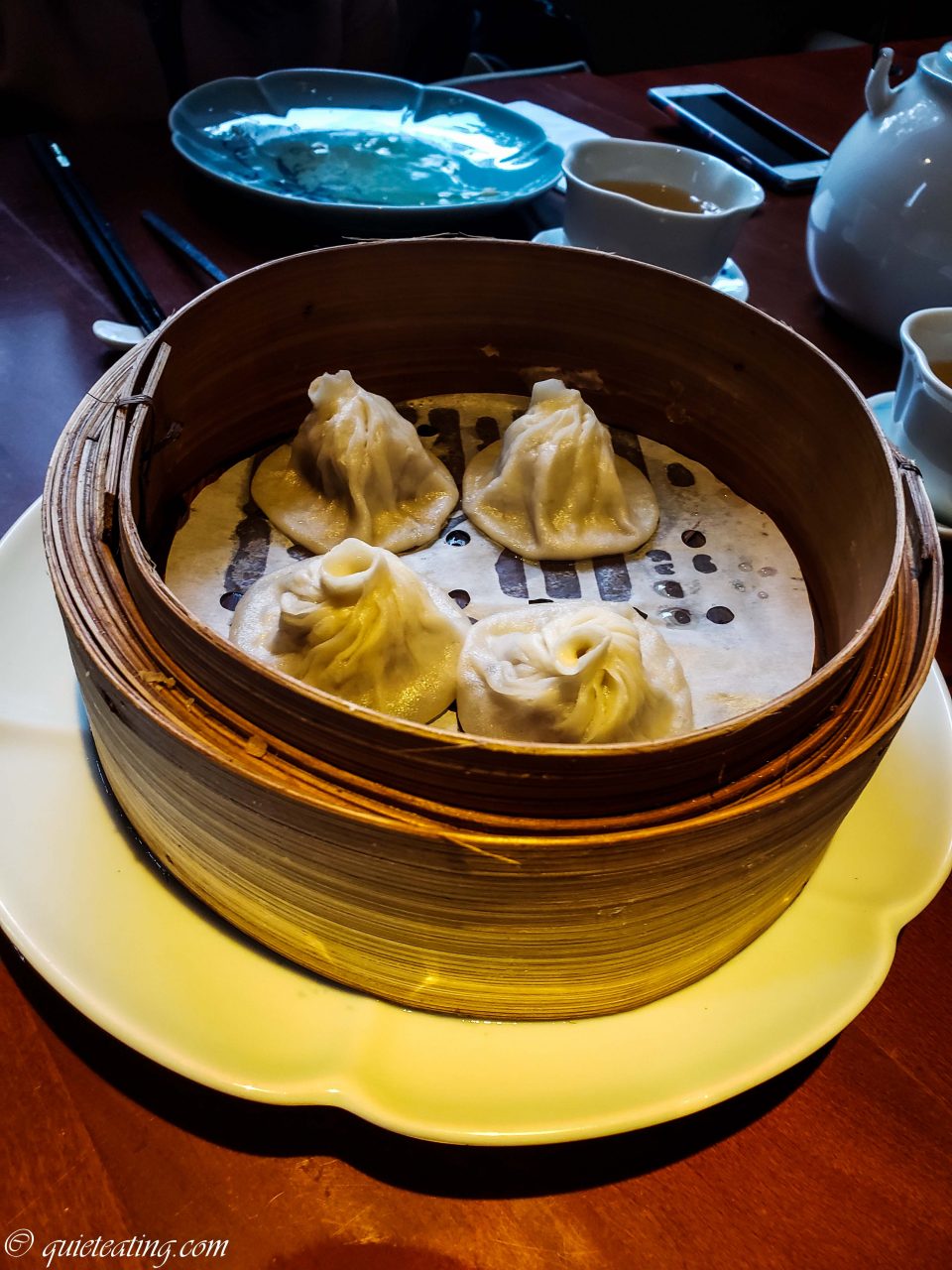 Xiao loong bao, pork dumplings with soup.  I haven’t seen sad dumplings before.  Now I have.  As you can see from the photo, the dumplings are kind of deflated and the soup that is supposed to be contain juicy insides (what you order these for), seems rather absent.  If my life did not amount to much, I would be depressed too. 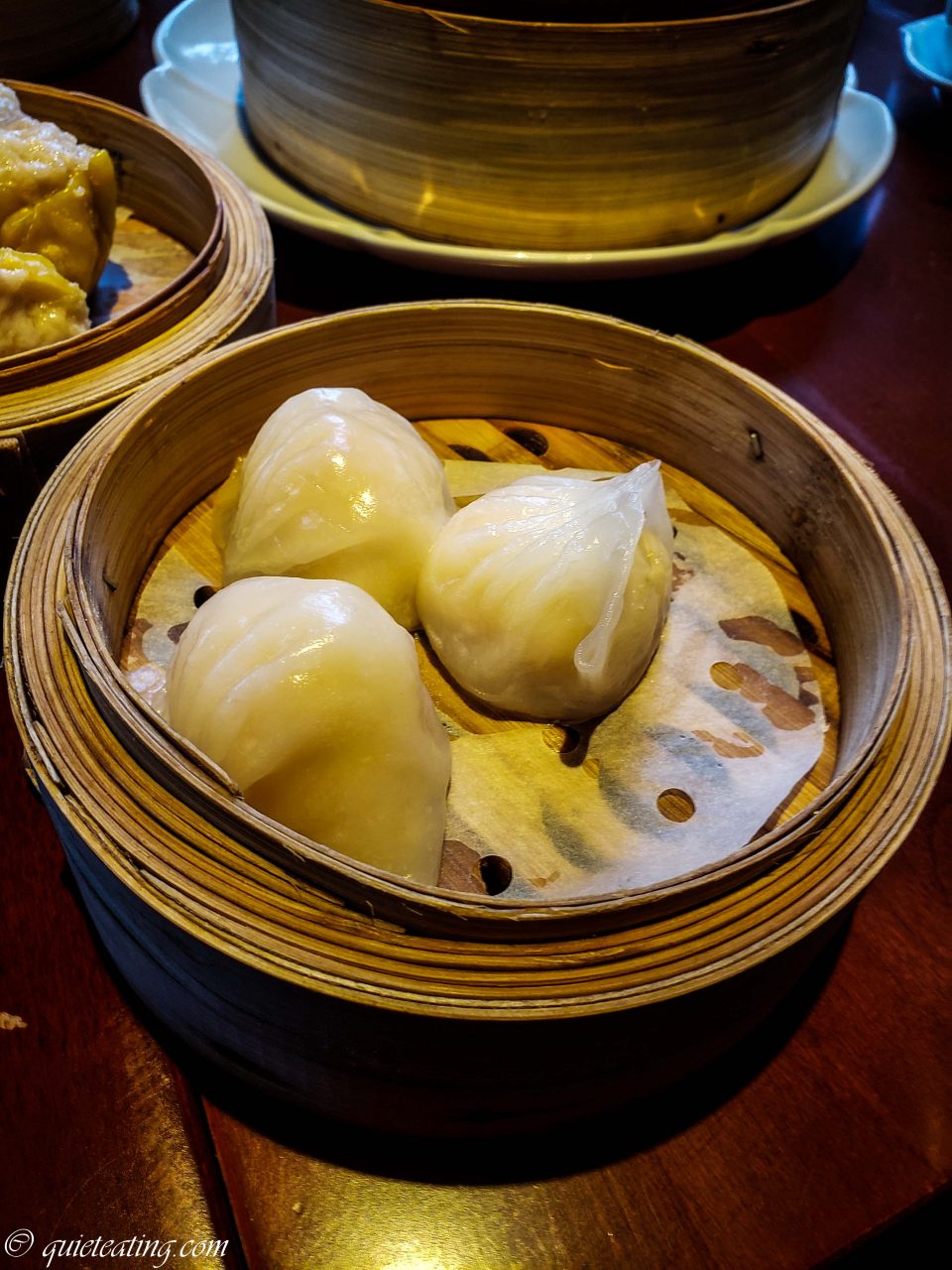 Har gao, steamed prawn dumplings.  Ok but strange that there were only three as these typically arrive in sets of four.  Perhaps the waiting staff got a bit hungry serving us.  No loss though as these were rather tasteless, anemic and costly. 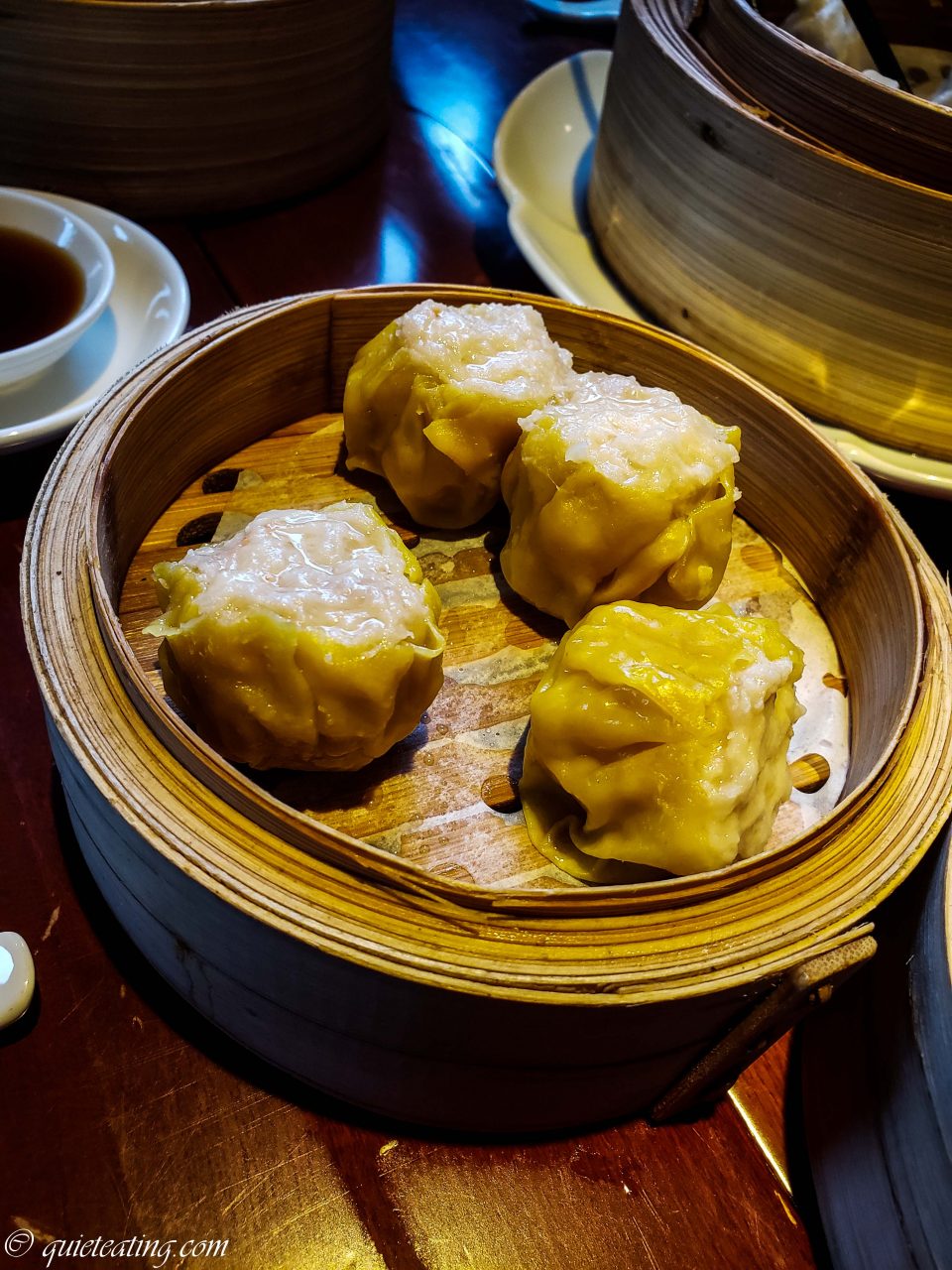 Siu mai, steamed pork dumplings.  I’ve had better coming out of a packet.  The give away of its origin was those two dumplings at the top.  When made fresh, they don’t generally tend to do that.  When it is out of the freezer packet though that is another story. 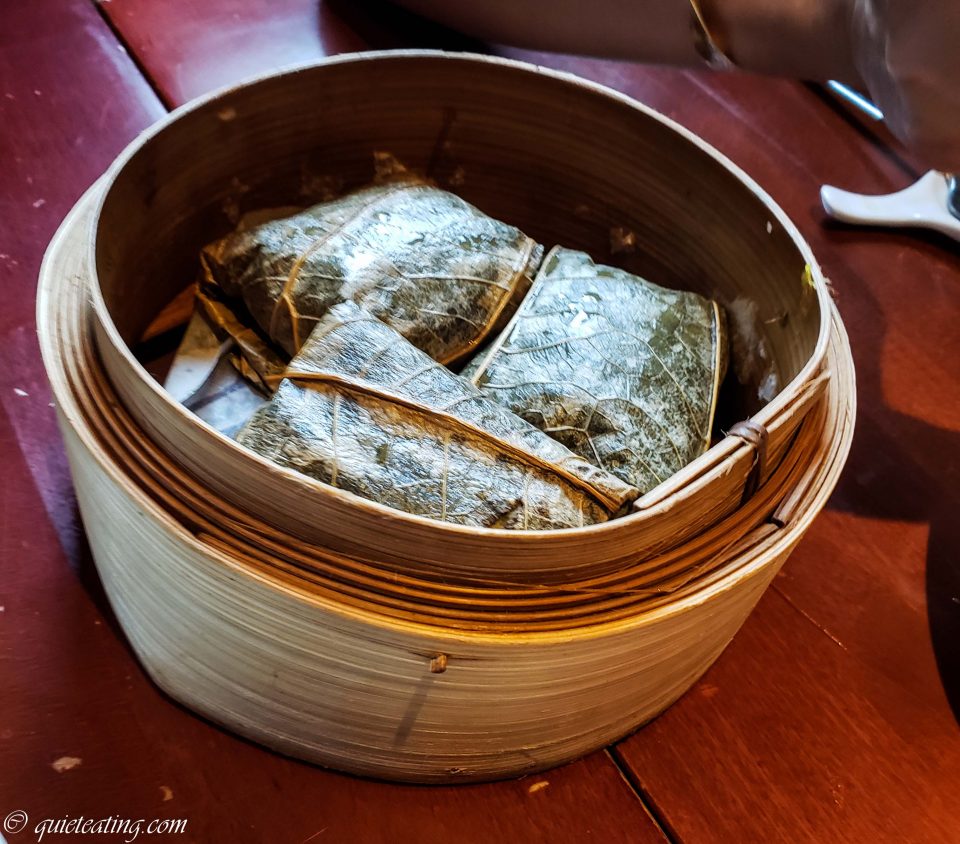 Sticky rice.  The best of the rest.  Which isn’t saying much.  Looked like they had been bought from the local Chinese supermarket.  Tasted like that too. 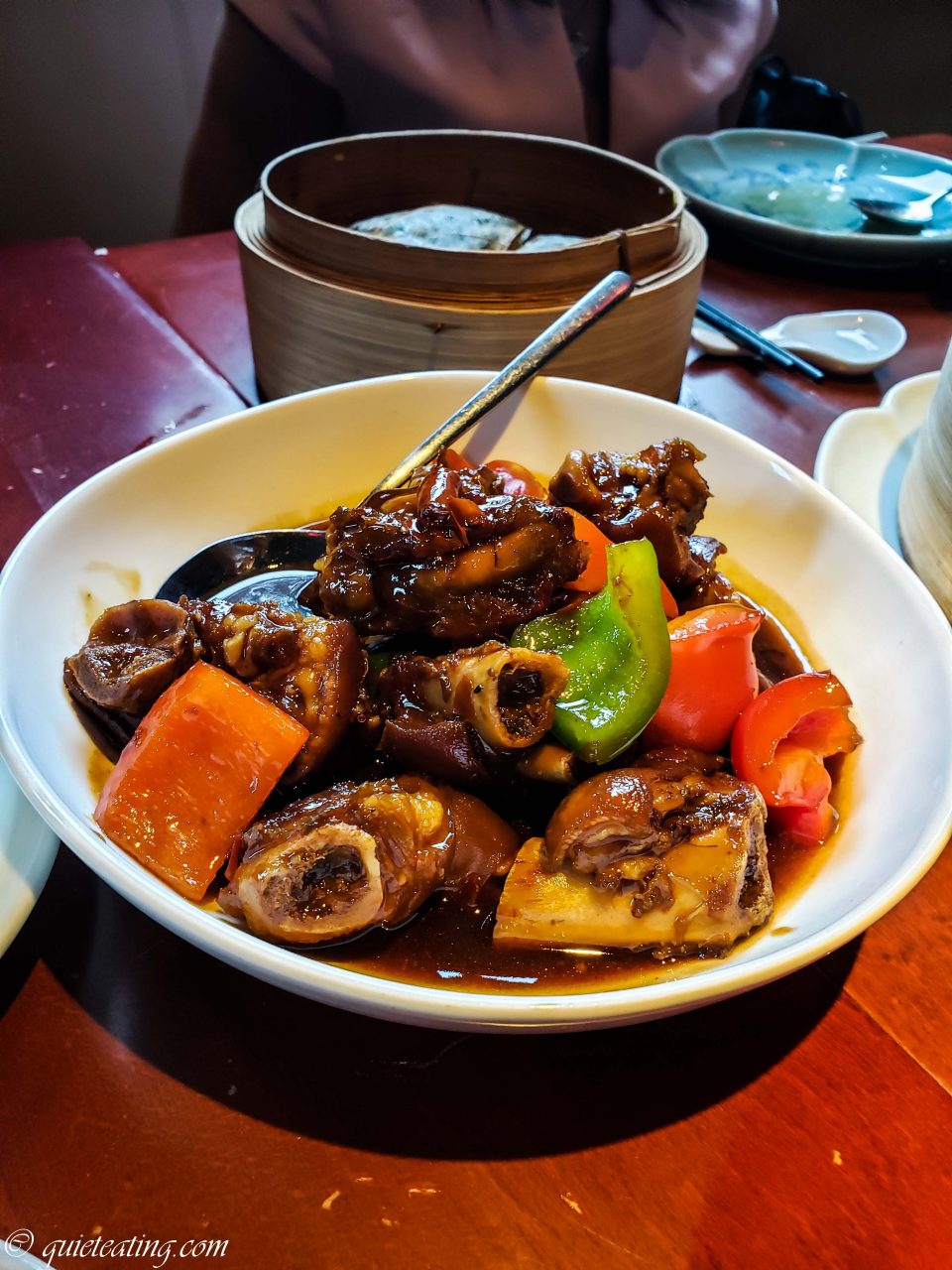 Braised Pig’s Trotter with Star Anise and Soy. Here was something a bit different though.  Pig trotters.  Except.  It suffered the same problem as the tofu.  Subject to rather weak sauce. 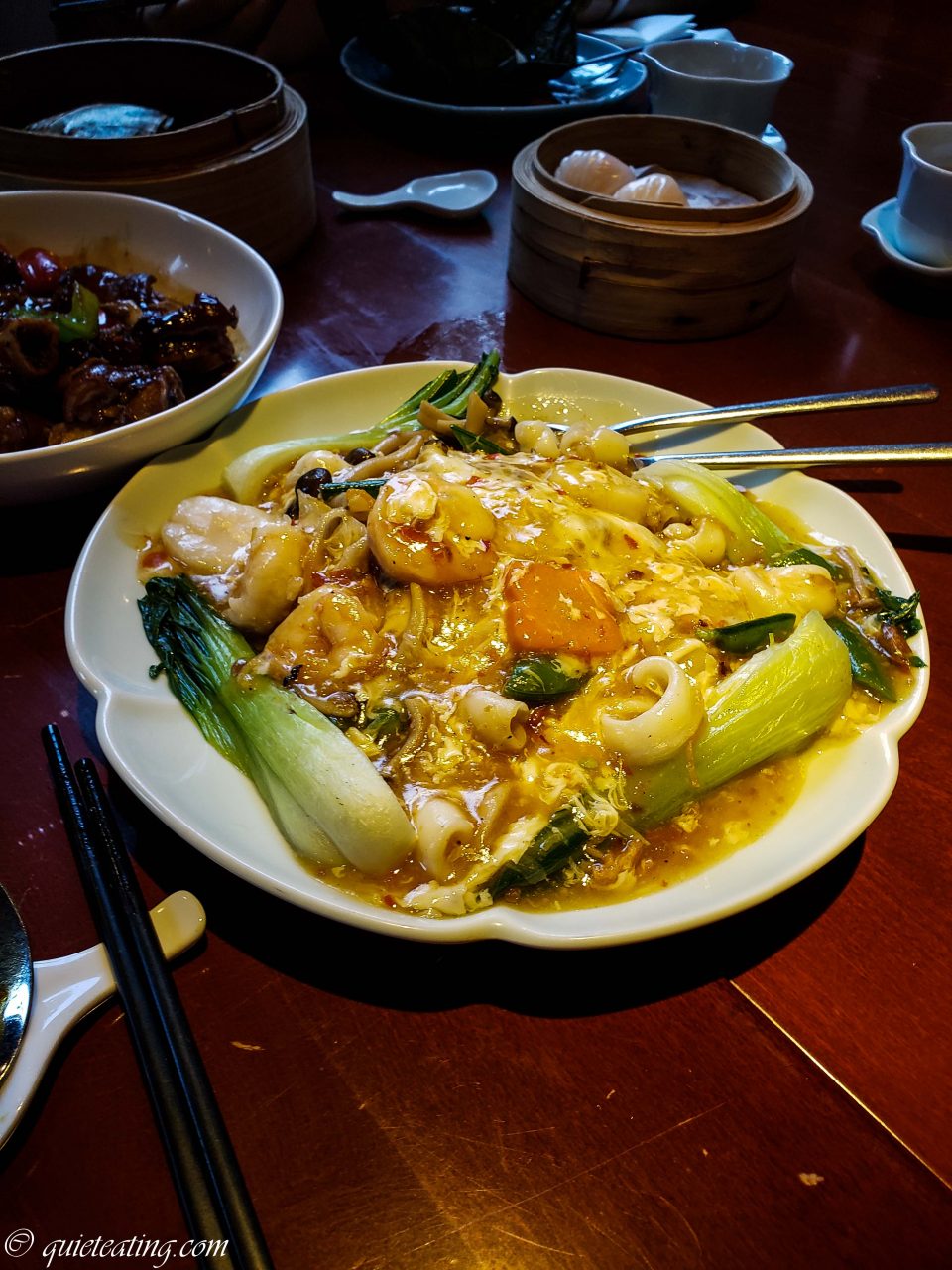 When all the food had came out, a waiter dropped by to see if we were still hungry.  Although my stomach was still growling, I was tempted to say sure, but not from you.  Then again, the waiters had been nothing but courteous and it was not their fault that the food was rather listless.  Of all the dishes, I think the xiao loong baos best summed up the food.  It was so insipid that I met my first remorseful dumpling.  So perhaps the trip wasn’t really a complete waste of time, money and stomach space as I am able to add a new experience to my list.  A meeting with a dejected dumpling.  Best captures the mood.

Lunch (3 course equivalent) would have been GBP40 excluding drinks and service.