Unlike celebrities (or celebrity politicians), I prefer to enter without much fanfare.

Slinking in the back unnoticed is my preferred entrance method.

The major benefit of this is that it tends to reduce the chance of excitement.  That is of particular concern now that restaurants are opening in London after forced hibernation as there are so many extra rules to follow that a slip up can have rather more severe (and exciting!) consequences.  For example, serving the disinfectant as an aperitif might not work out that well, despite what one prominent politician says about ingesting that…  On the flip side, you could say that life is about taking calculated risks.  On this basis, weighing up my continued sanity against potential fatality, I choose to return to eating outside.  After all, even crossing the road has its own risks.

As another positive, I can now say that I partake in a death defying hobby such as free climbing, diving with man eating sharks or playing in  traffic – eating out.

This is the London outpost of a Nordic chain promisingly the freshest and tastiest westernised Japanese food this side of the globe.  The decor reflects this minimalist Scandinavian theme.  The service did too.  Let me explain.

Although the tables might be heaving (6 people in the restaurant aside from us in a room built for significantly more), it still took us 35 minutes from ordering to get any food on our plate.  On the third attempt to get an explanation out of the waiter, he stated that because of COVID 19, the restaurant had had to reduce the staff.  They only had 2 chefs now because of COVID 19.  He didn’t really explain why this was so as it wasn’t as if any of the waiting staff were wearing masks or taking care about how close they passed.  I asked, if they had reduced their staff to cut costs and I was suffering prolonged waiting time for this, I would expect a discount too.  Or some freebies.  Or something to at least ameliorate my building anger.

None was forthcoming but I think the waiter could read my facial expression.  I have at many times been told by my friends to be more expressive.  Guess that this time it worked. 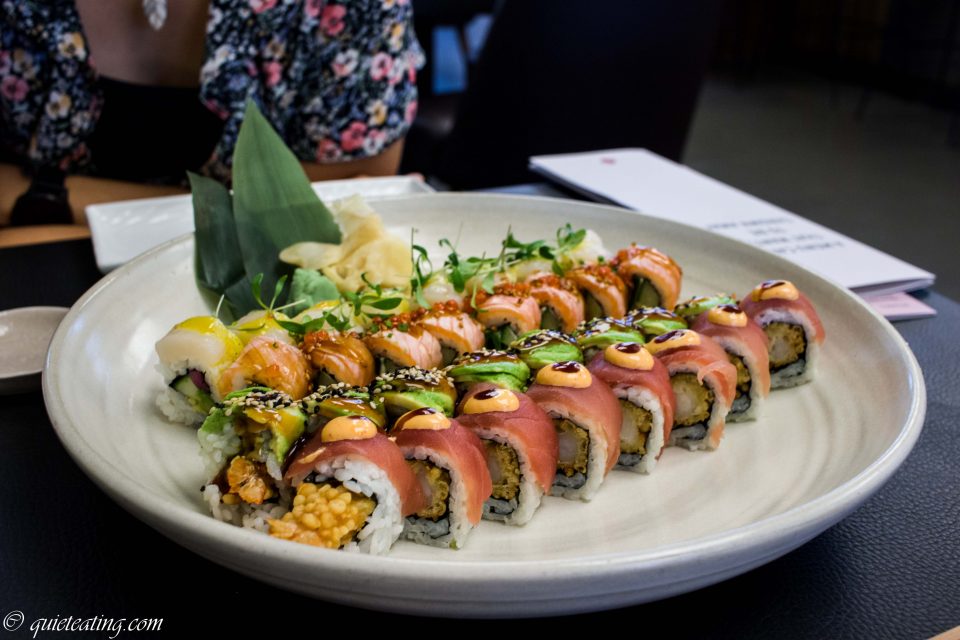 Very pretty.  Rather less impressive on the palate.  Yet, I admit that perhaps I am being a bit of a snob here.  As for heavily westernised sushi, perhaps it is ok?  Perhaps they thought that the pretty colours and layout would distract me from the taste. In which case, they are trying this on the wrong guy.  On the positive side, I had almost forgotten how much fun it is to write about a bad experience to compensate for living through in the bad experience.

Like the colours, the flavours were a mishmashed car crash.  Delivered slightly warm in one rather limpid chunk, I couldn’t really tell what type of fish I was eating.  The rice was rather tasteless (guess they don’t use rice vinegar up north) and the sauces overwhelmed the rather insipid flavour of the fish. Then again, perhaps I should thank them for not only making my day by giving me something to furiously write about but also give me something to talk about.  I can now say with confidence that bad sushi does taste like cardboard.  That is not a metaphor as in my younger desperate days, I did give that a try.

Yet perhaps I am being a bit crazy and mean here and cannot understand what real sushi tastes like.  I am after all just an amateur food critic and there are many out there with far greater acumen, exquisite taste buds and encyclopedia knowledge of Japanese food.  Not like I’ve lived and eaten in Japan for 2 years.

Even disregarding as minor a point as how the food tastes in a restaurant, maybe there is something that I should thank them for.  Convenience.  If I really want to see what overpriced Western sushi is like, no need to travel into the hotbed of Central London to Oliver Maki or Murakami.  Walking over to a restaurant seems like it is a lower risk. I should be more specific there.  A lower risk of catching something on the way to the restaurant.  As for what happened inside, I definitely caught an exciting experience both with the food and with the rather nonsensical service.  Should have gone to McDonalds.  At least there you know exactly what you are getting.

Lunch (the above for two) was GBP24 per person excluding drinks and service.