There is often conflict in my head when I hear about new places to eat.  The first thought that flits through my mind is one of unbridled excitement.  A new place to try!  How exciting!  It then progresses to conflict, the battle to keep trim and thin, balanced against my sacrificial duty to provide the world with some informed (although often uninvited) commentary.  After such lengthy internal discourse, a time of contemplation is the needed to muse about whether the costs outweigh the benefits.

At times, this discussion is rather draining so I usually find myself needing a bit of energy.  Or that’s how I self-justify my actions.  So when I heard from one of my well versed friends who works in the culinary arts that he knew of a place that might be the next big thing, I could not pass it up.  I thought that I had to do my best for the betterment of mankind and plumb the unknown depths.  This epic discourse usually takes about 2 seconds, almost an eternity for me.

Oh so I like to tell myself.  After such a prelude, here is what I ate. 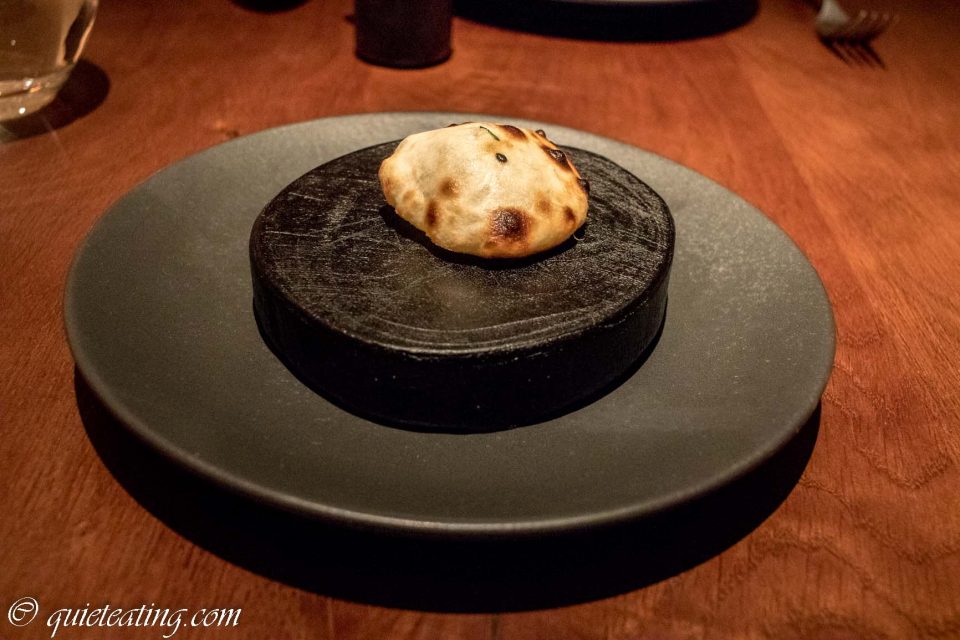 Blue cheese naan.  At first, I was sceptical about this.  In my experience blue cheese often seems to have an overpowering taste.  Surely this would easily swamp out the more plain naan and lead to a less than enjoyable experience.  I was (as often I am) wrong.  The strength of the cheese was carefully calculated not to overpower the naan.  So I got the richness of blue cheese with the complimentary body of naan.  A good amuse bouche. 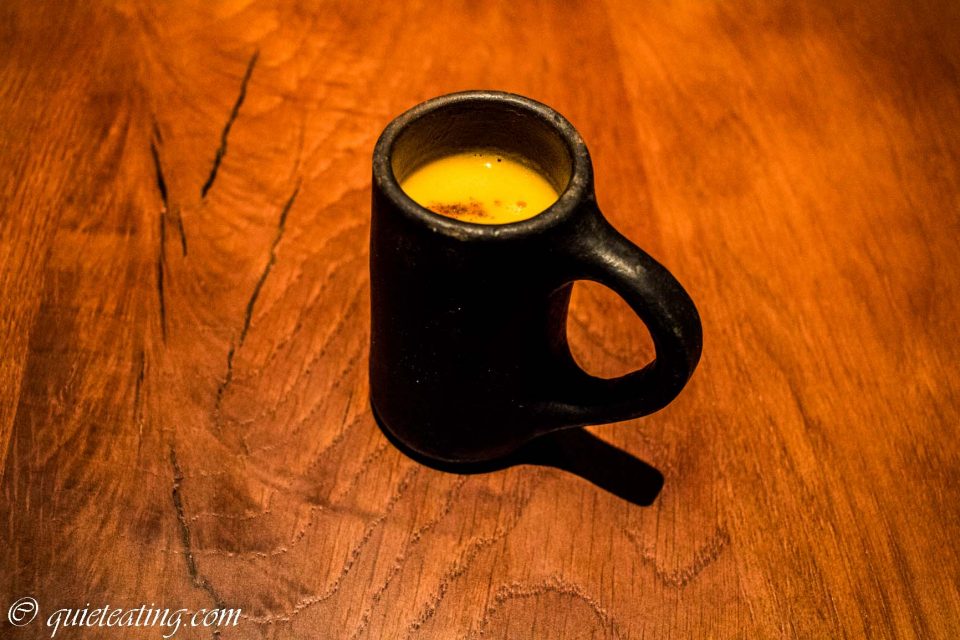 Pumpkin soup.  With a great blend of Indian spices.  In a small tasteful cup, so as not to spoil the rest of your meal, this pumpkin soup is easily gone in a few sips.  That is a very bad thing.  As this is the best pumpkin soup I have ever had.  The spices did not overpower but rather enhanced the deep flavour of the pumpkin.  It was worth coming just to try this, exceptional. 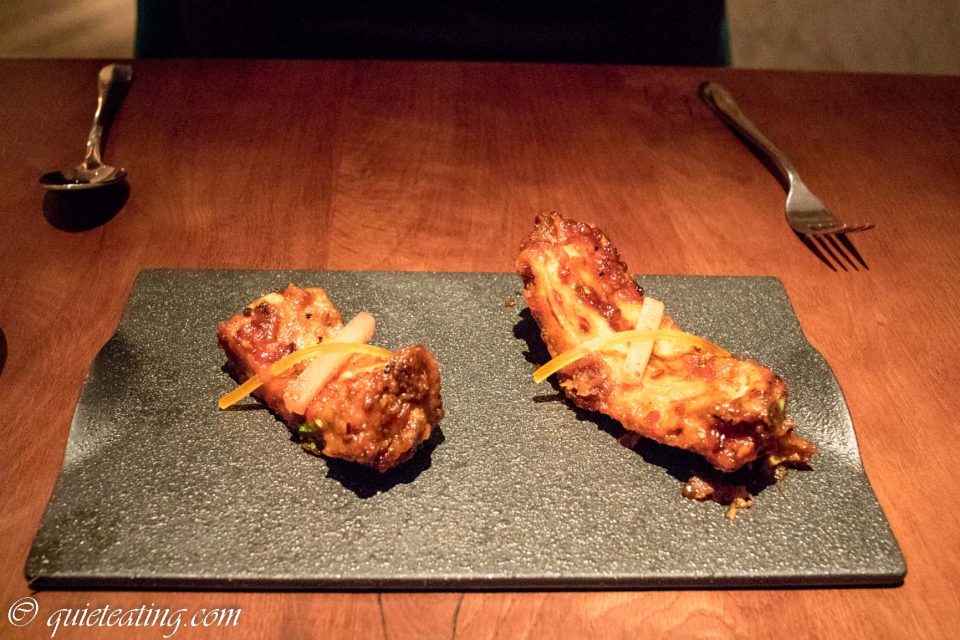 Meetha achaar ribs, sundried mango, onion seeds.  The first of our starters.  This hinted at something that we were to experience throughout the meal.  Carefully cooked so it easily parted from the bone and was hurriedly stuffed into one’s maw.  These avoided the trap of being so overcooked that the taste leeched out of them.  A winning medley of spices. 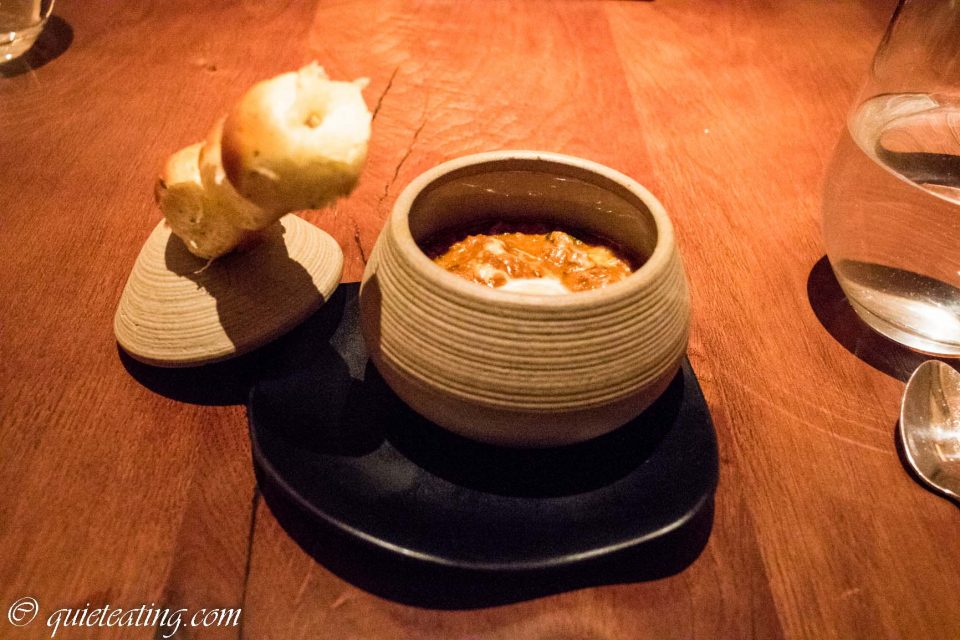 Soy keema, quail egg, lime leaf butter pao.  Minced lamb with a new twist.  With enough spice to add a hint of fire, fluffy bread on the side and raw quail egg in the middle, this dish was a delight.  A combination of richness of the meat, lightness of the bread and smoothness of the egg, this was pure goodness. 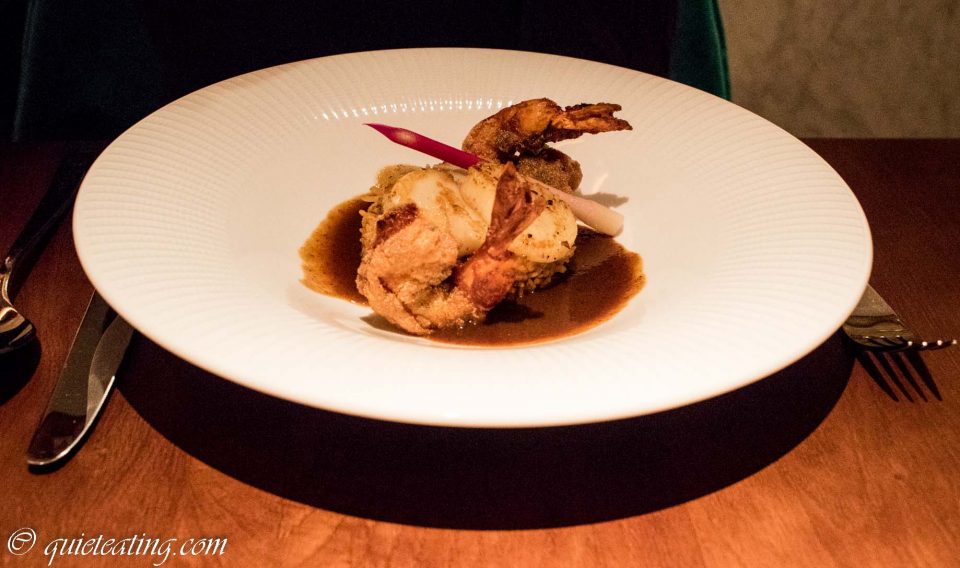 Seared scallops, rava prawns, malvani dried shrimp rice.  I find that it is often seafood which separates the good from the excellent.  Too often I have experienced an otherwise good restaurant falling flat on its face when serving the fruits of the sea.  They tend to be sadly overcooked, an almost unforgivable offence.  Yet, this is where they have got it right.  The scallops and shrimps were just the right side of cooked.  The sweetness of both shone through, demonstrating the freshness of the seafood bounty, these were great. 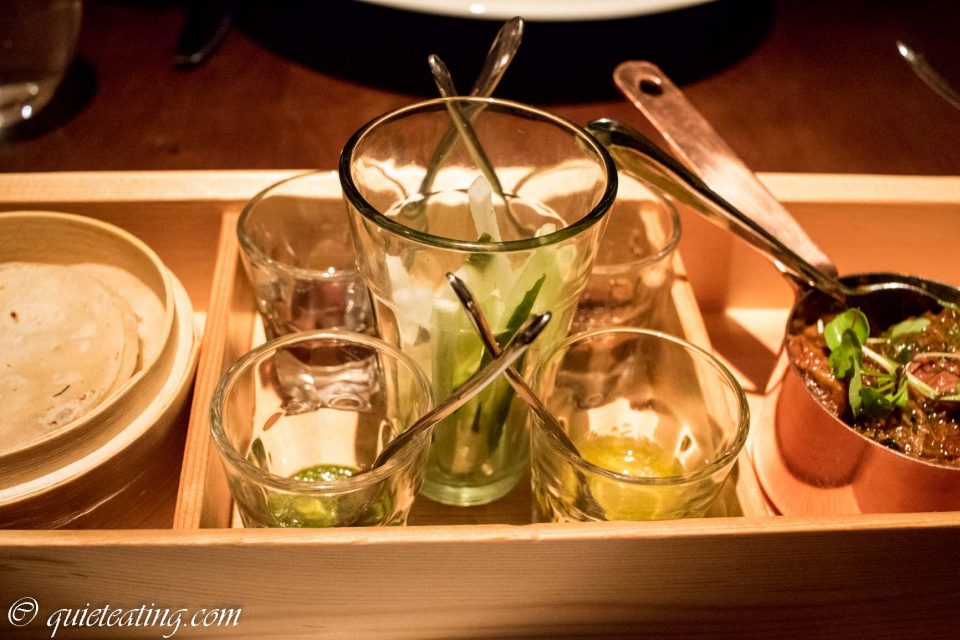 The lamb came with a little bit of a show.  First the four condiments of spices, moving from mild to strong, with cucumber in the middle. 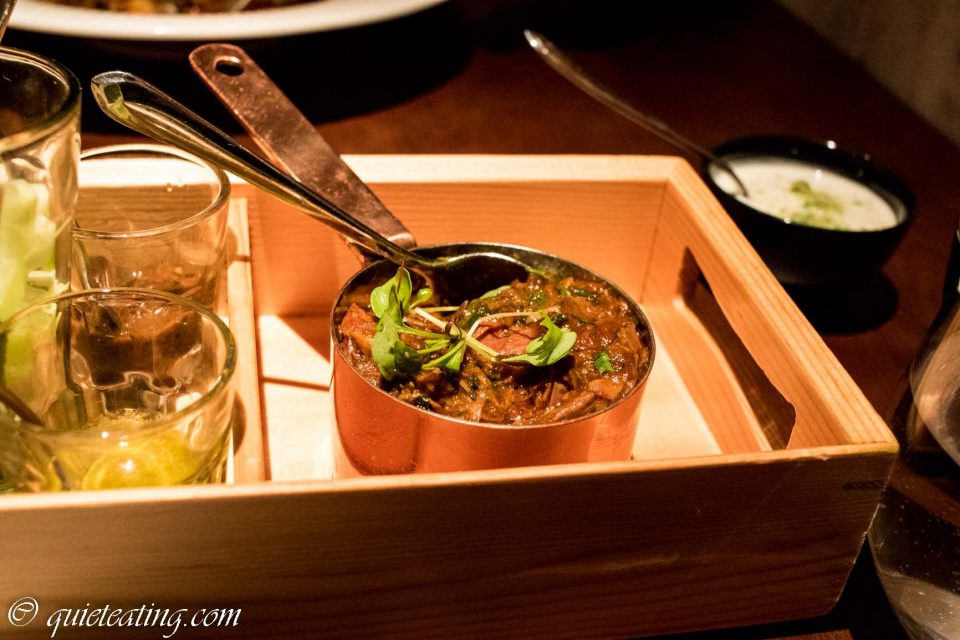 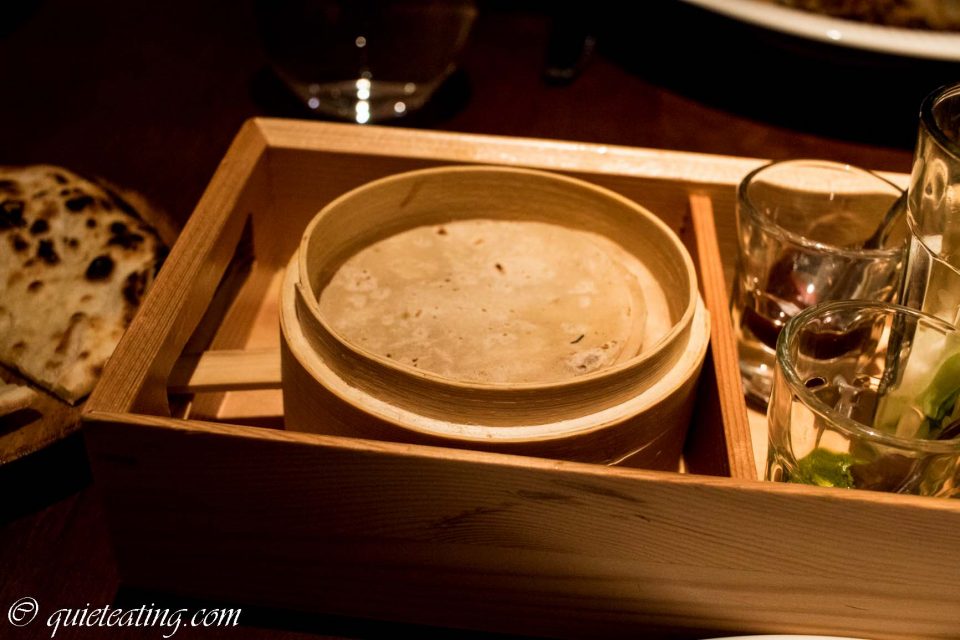 The presentation brought up thoughts of Peking duck, as it is often served in a similar way.  Grab your pancake, put on some cucumber, add your sauce, then put on some meat.  The roti pancake added an interesting earthly flavour, the cucumber a clean element and the lamb, oh the lamb.  The lamb added so rich a flavour that I almost swooned.  It was so very flavourful that I cannot remember the last time I had lamb that tasted as great as this. 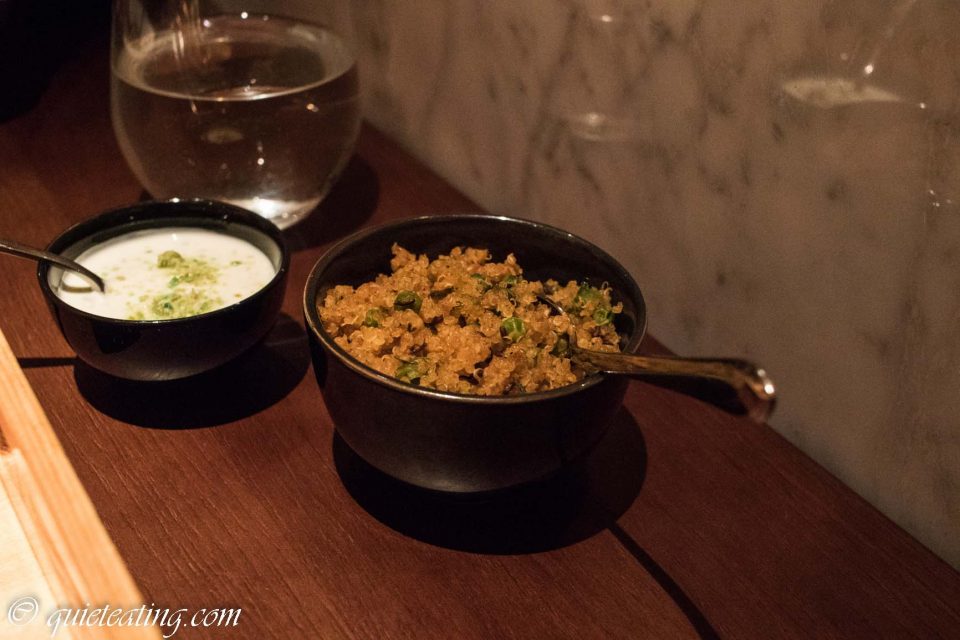 Green pea and quinoa pulao.  A lighter side. 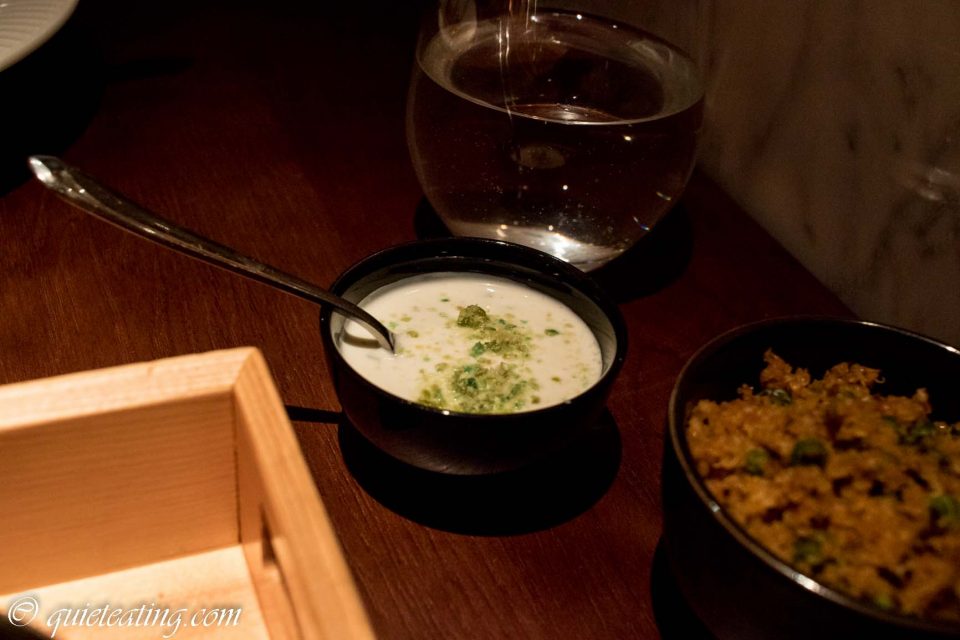 With yogurt to extenuate its clean taste.  The pulao and yogurt was a slightly more bland side to highlight the flavour of the mains. 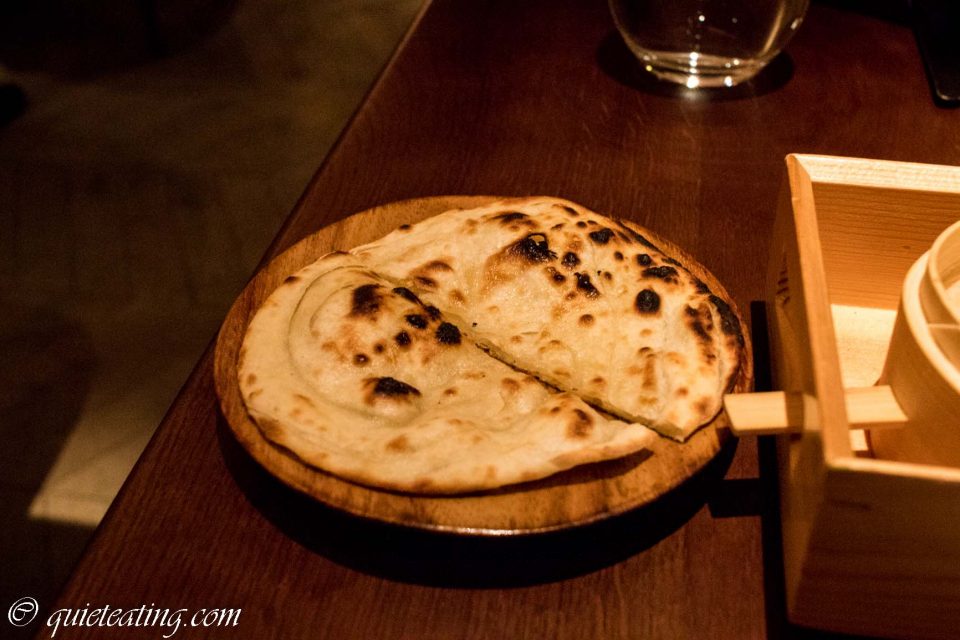 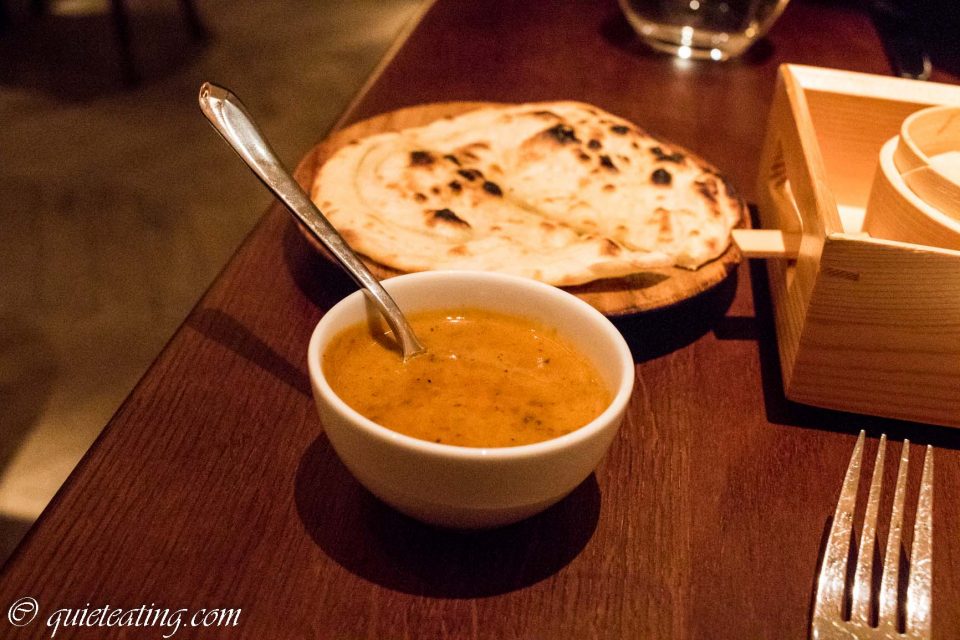 Black dairy dal.  With a mild lentil curry, the stand out here was the bread.  The mild curry served to highlight the rustic and earthiness of the naan.  I could eat the naan alone though. 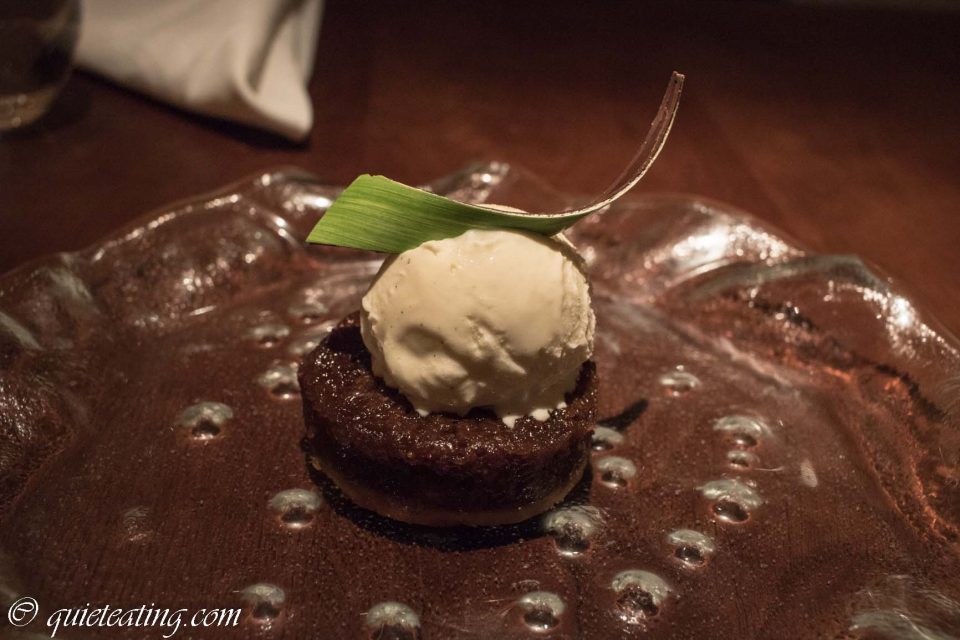 Indian Accent is a very dangerous place.  Perhaps (as was I) you might harbour pre-conceptions about what Indian food should be like.  Yet this is Indian in another guise with deceptively small, succulent dishes that are surprisingly filling.  Just be wary (unlike me) that the unsuspecting size of the dishes does not catch you out.  You won’t walk away hungry.  Turning away from the fullness of the meal though, if it keeps up its standards, this would be a good thing for London but not me.  I would be a larger man.  Yet if this is not your worry, I definitely recommend you stop by.  It is worth more than a 2 second stop.