The mind is a fascinating thing.  It can convince ourselves that the bad is good, the good is bad and make a mockery of the middle.  It can also confabulate tastes, seemingly tasting things which aren’t there or ignoring the obvious.  Sometimes a bit of experimentation of this theme can result in greatness, think here of bacon and egg ice cream.  Yet, sometimes things do not go according to plan, I’m looking at coal ice cream from Japan here.

So this is why I was slightly apprehensive visiting Honey and Spice.  Even if combining these two attributes seems to be a safer alternative than skating on the edge of culinary good taste. 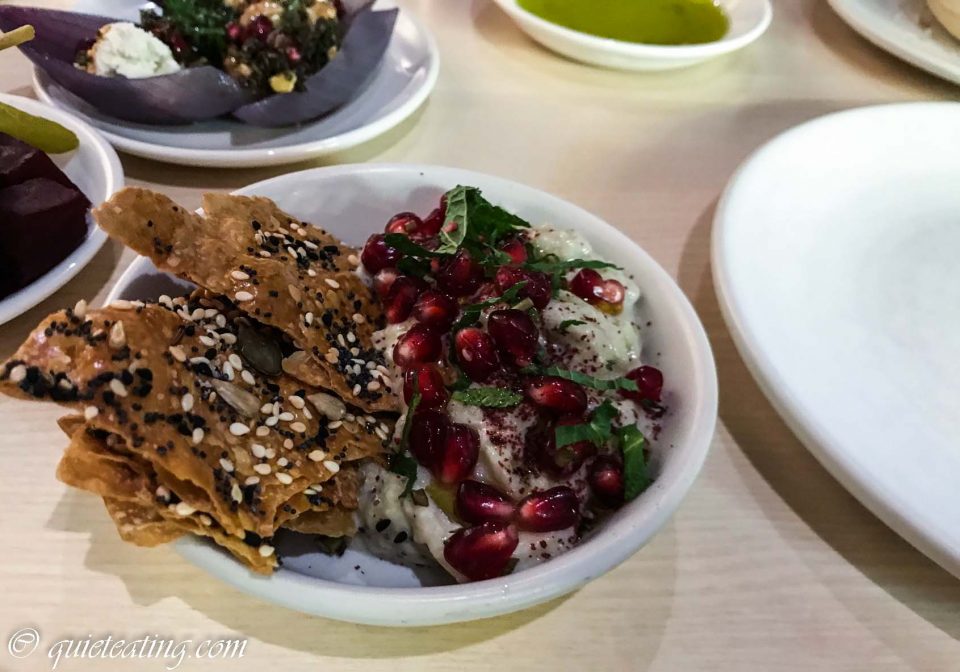 Baba ganoush, burnt aubergine with tahini and smoked almonds.  An interesting taste with tart, sweet, mushy and crunchy all rolled into one.  It was pleasant. 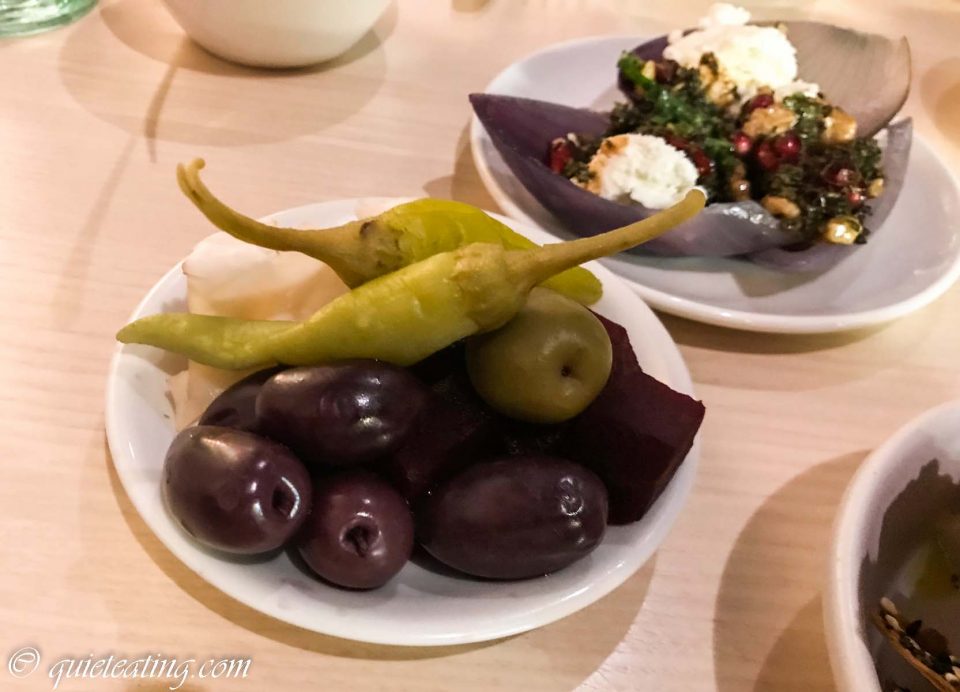 Kalamata olives, pickles.  Something rather plainer in this case.  An object of not that much spark.  These were rather ordinary. 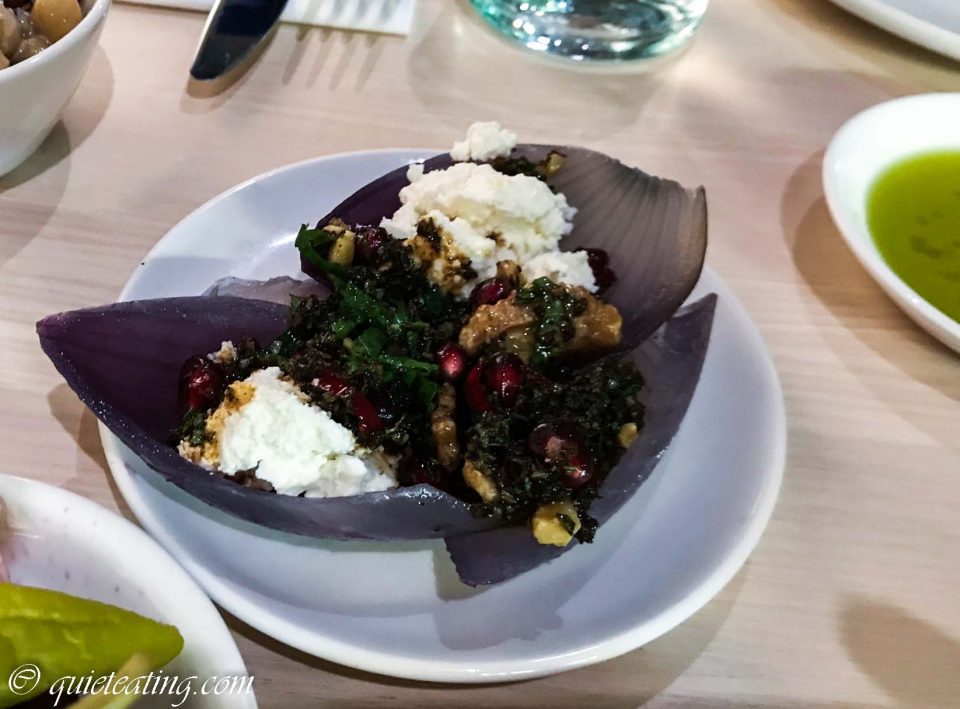 Burnt onion with pomegranate molasses, feta, walnuts, sage and rosemary.  An inspired (at least for me) combination with nutty, tart and smooth all together.  A bit miserly on the portions though (we did order the set menu for 3 people), a theme which was to reverberate throughout the dinner.  Why were there only two portions? 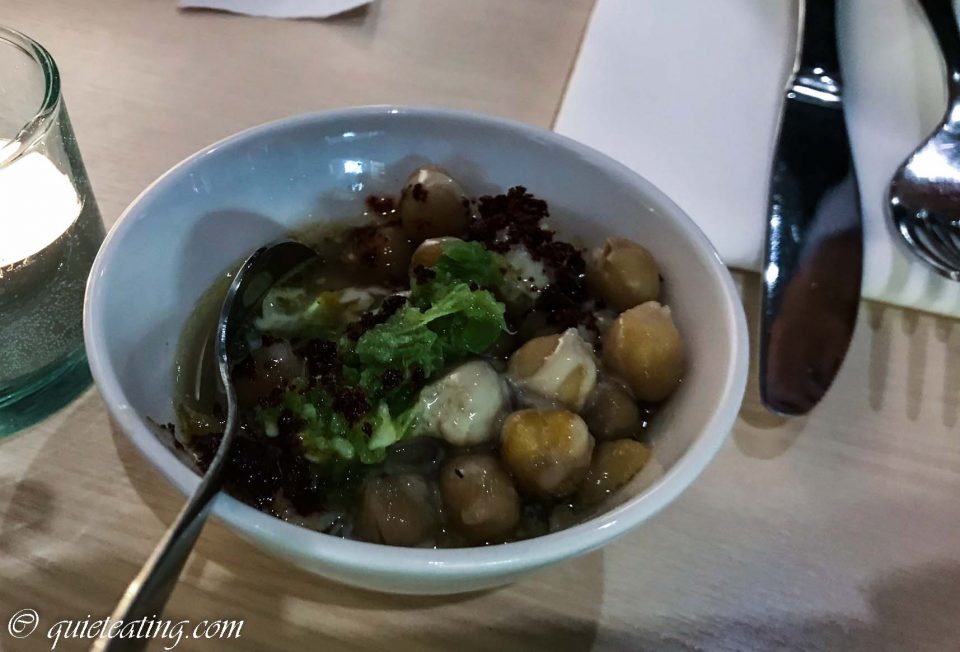 Warm chickpea msabacha, tatbilla.  Something more expected, the chickpeas were not bad and the msabacha and tatbilla decent if not stand out. 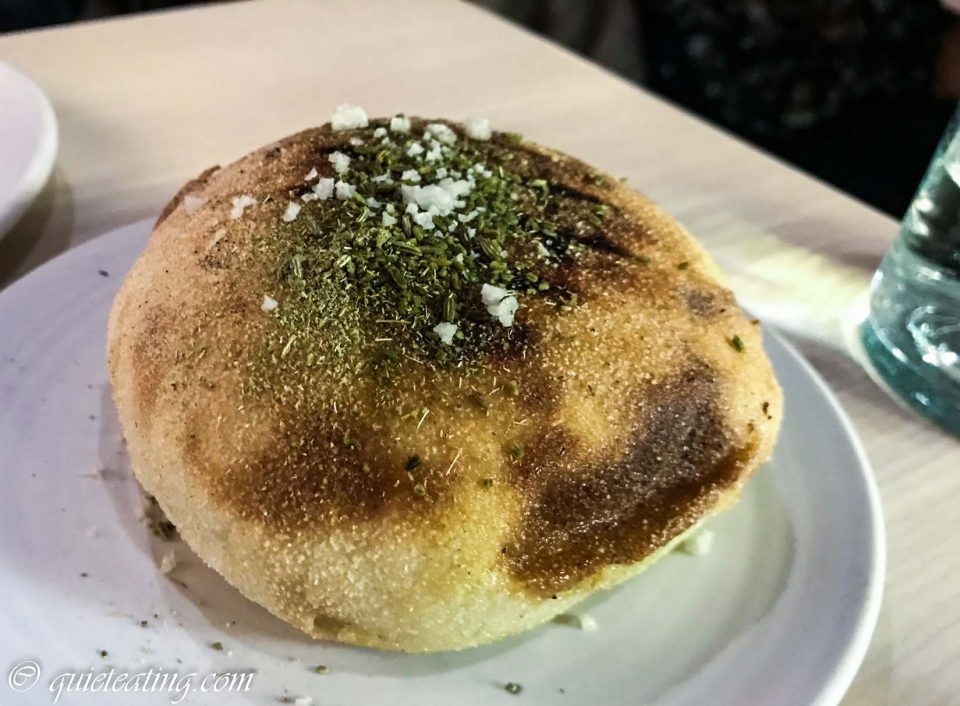 Moroccan sourdough.  This was something new.  A welcome surprise from the average level which had gone before, this bread was airy, dense in all the right places and proved to be a delight when used for mopping up the sauce of other dishes. 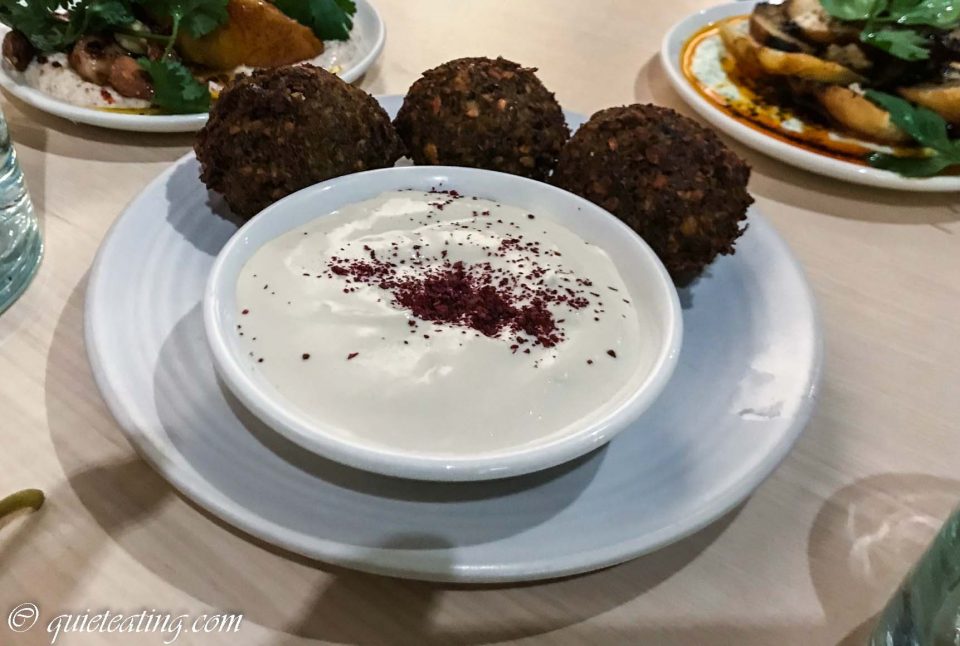 Green herb Falafel and creamy tahini.  At least they decided to give us 3 portions for this.  Which was a good thing as otherwise we would have had a messy time dividing things up. 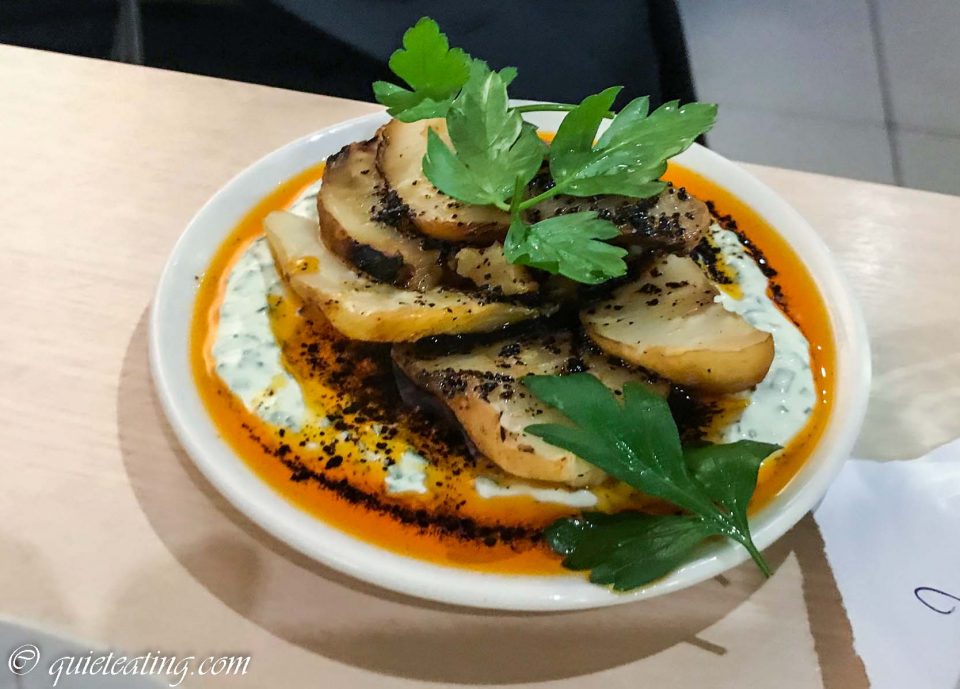 Burnt celeriac with chive sour cream and urfa butter.  This was fascinating.  I had not had such large chunks of celeriac before.  Usually, I have had it as part of a larger dish, whether it be bread, butter or a salad.  Instead, here they are the star of the show and this is where they could easily belong.  The cream and butter set off the palate, building on rather unoffending root vegetables.  The best way that I think you can describe this is thinking of the celeriac as the white canvas ready for you to paint your masterpiece and the work you would create would be full of sparks. 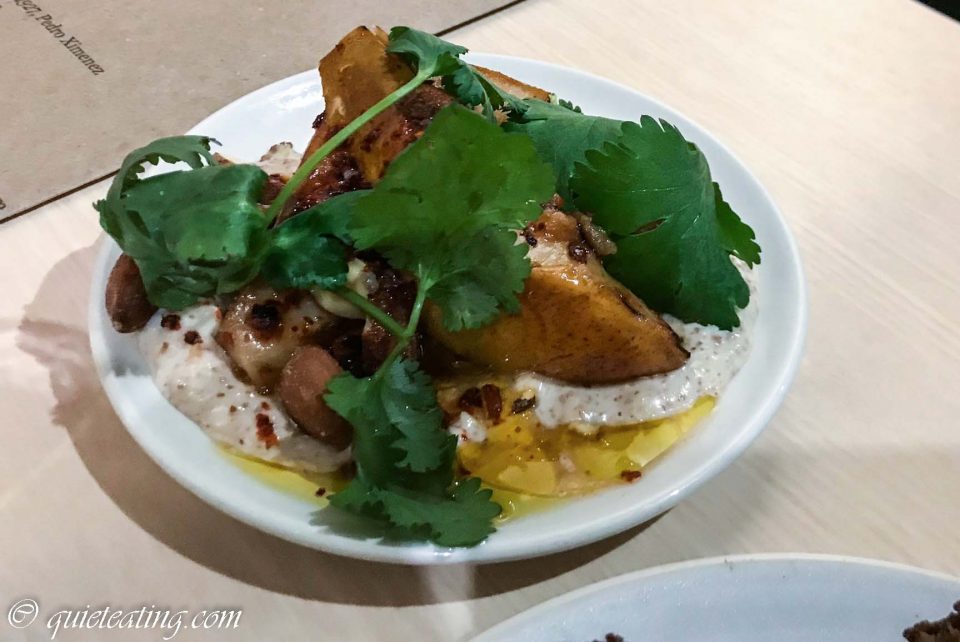 Grilled pear, almond tahini and smoked almonds.  Similar to the celeriac, the pear didn’t taste of much, highlighting its clean manner.  Instead it gave some body to the almond elements. 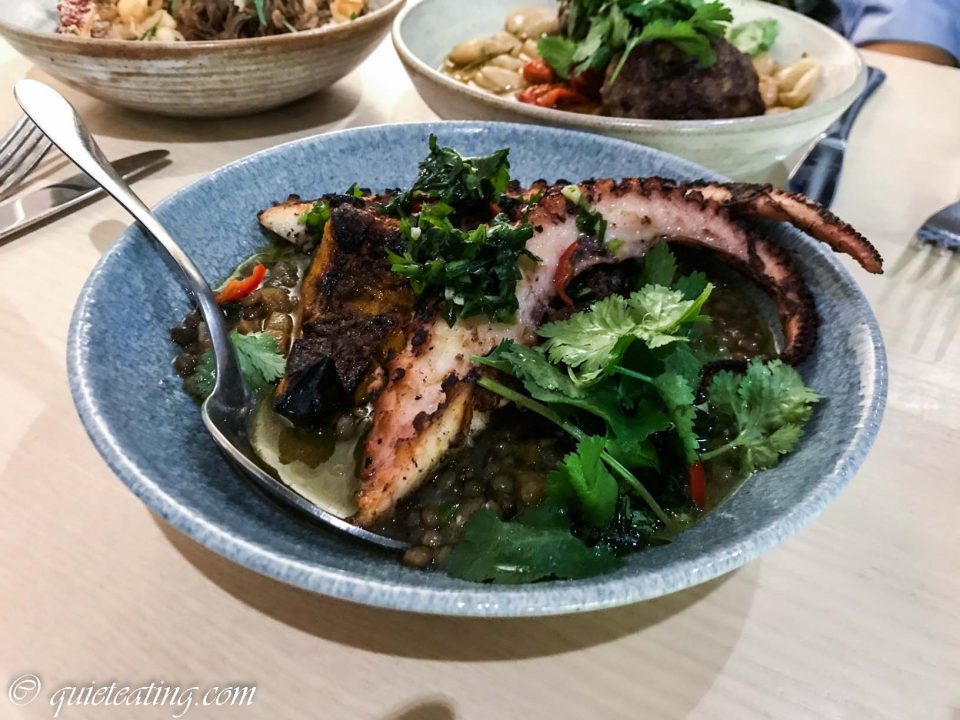 Charred octopus, spiced Delica pumpkin, Syrian lentil stew and zehug.  The octopus was not bad, if nothing spectacular.  Although, it was at a bit of a steep price for what it was.  Nothing complicated here. 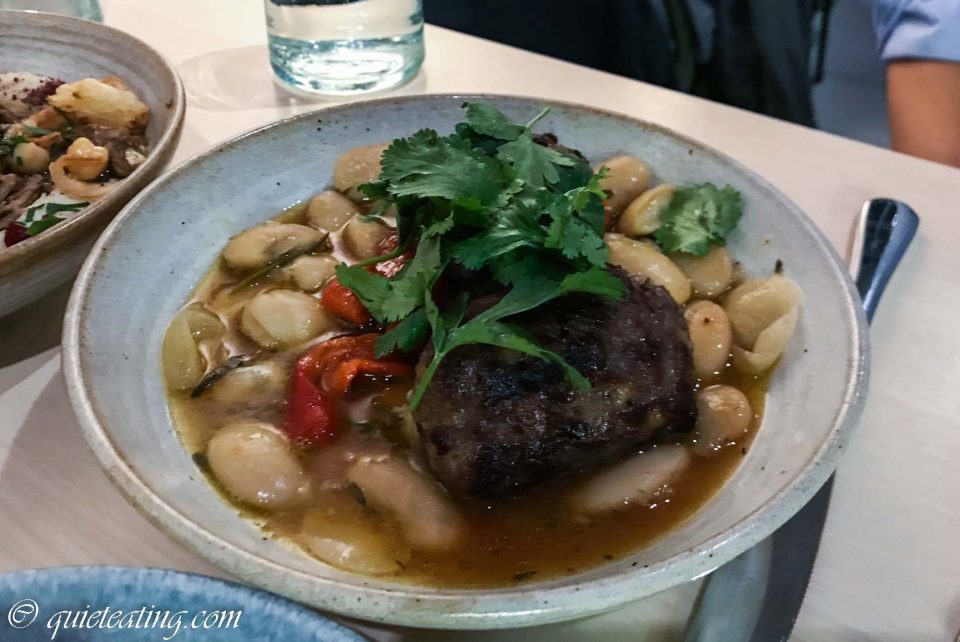 Beef and kashkaval kofta with Greek gigantas stew and roasted peppers.  The koftas were not bad and the vegetables offset their meatiness.  Although again, this was not a complicated or hard to make dish. 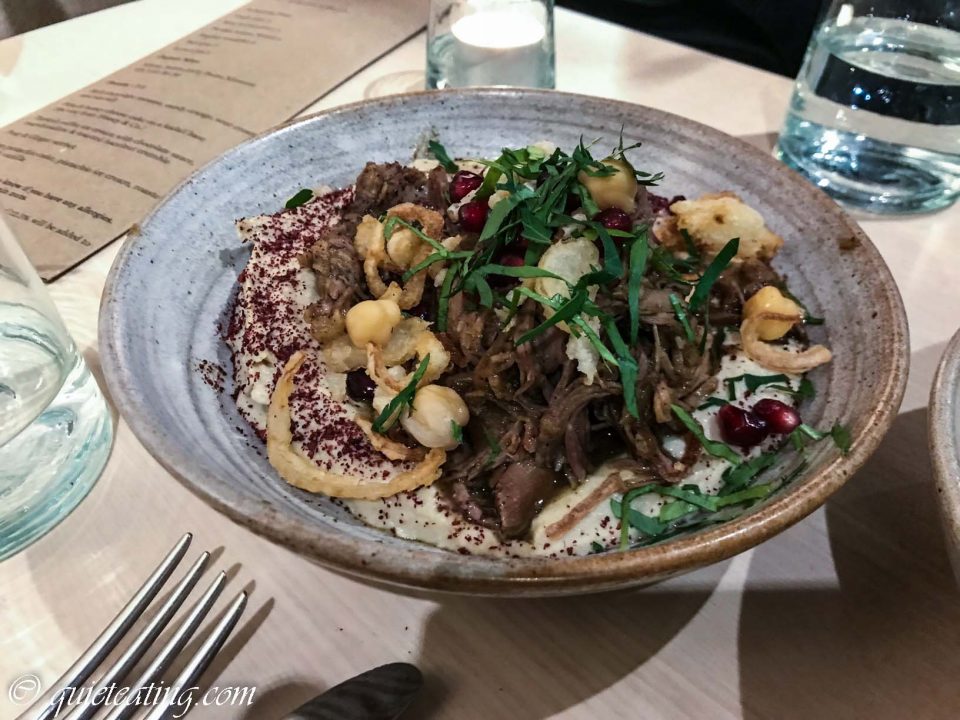 Lamb shawarma on creamy hummus, crispy shallots and chickpeas.  Probably the best of the mains, fall-apart lamb, full bodied hummus and delightful vegetables.  This is something to order again. 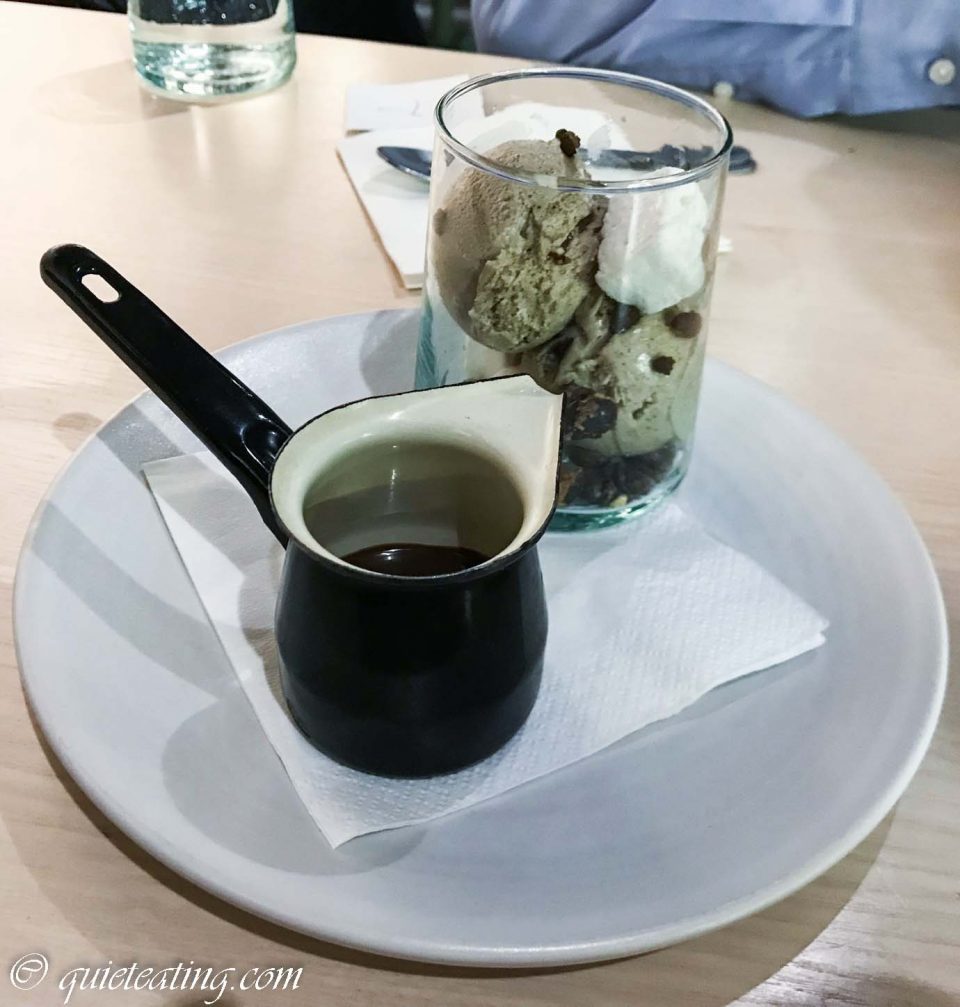 Turkish coffee ice cream with chocolate sauce, marshmallows and toasted hazelnut crumble.  The  juxtaposition of bitter and sweet notes made an interesting dessert.  It also provided a needed caffeine jolt so I could stagger sleepily home (its been a long week). 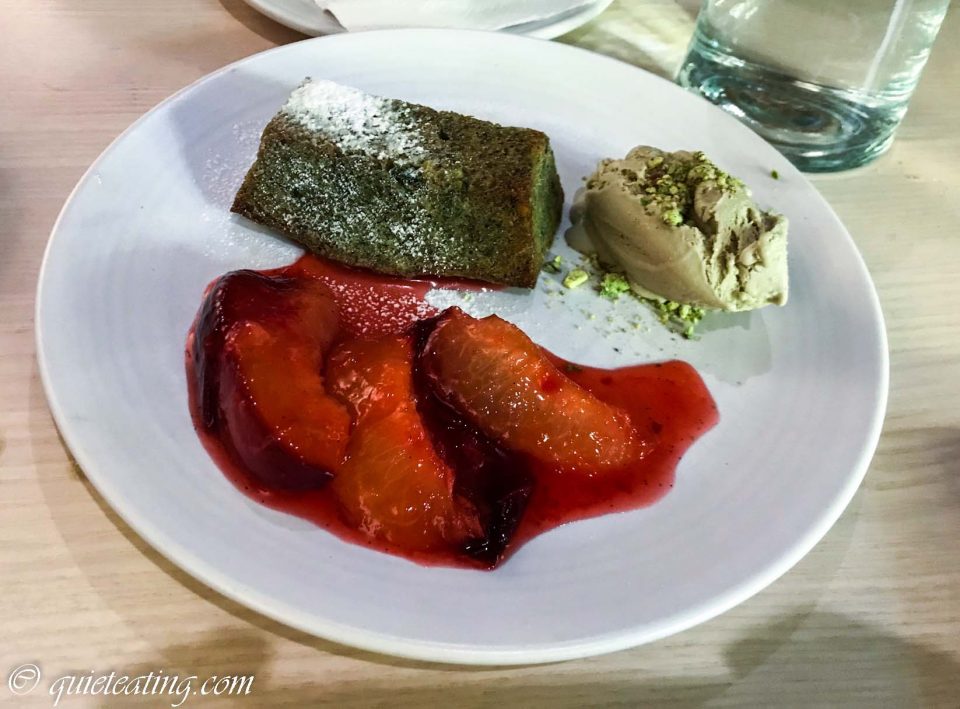 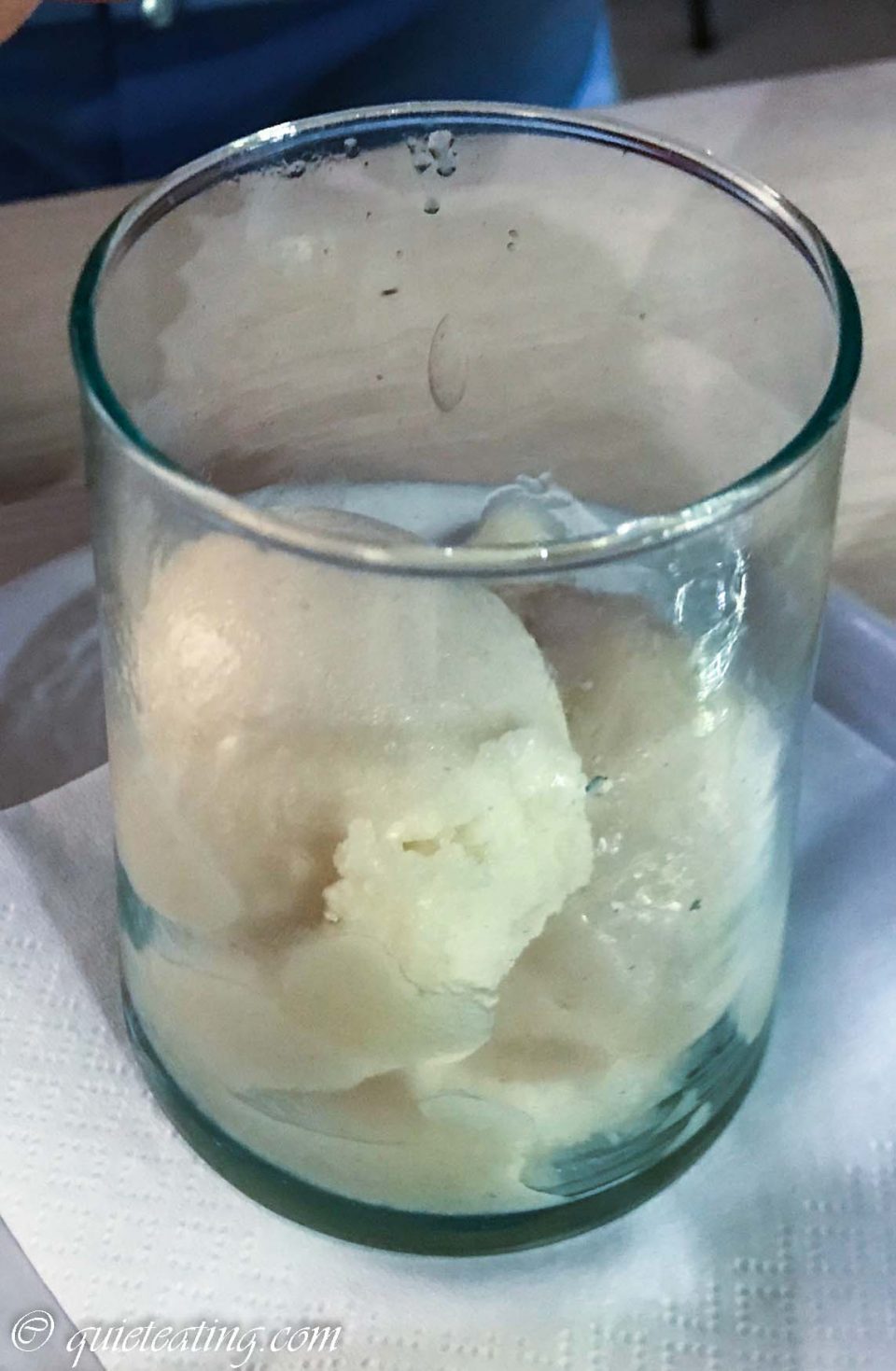 Pear and ginger sorbet.  An interesting flavour, if not really that out of this world.

As I left the restaurant, I was a bit confused.  Some elements were great, showcasing some of the best the middle east has to offer.  Others were perhaps more mundane showing a more familiar side to London.  Some were… best not dwelt on.

Unhappily though, at this rather full price, the portions seemed rather meagre.  Although one or two of the dishes were excellent, on average it wasn’t so good as to justify either (a) a detour out of the way to visit or (b) monetary constraints in my inflation dominated and cash strapped days.  Although I am apparently in the minority here, as when we arrived, it appeared to be very definitely popular.  So what do I know, I’m just an unassuming amateur food blogger who provides unsolicited commentary.  So don’t pay that much attention to me.  As if you have a bulging wallet, a hankering to follow the craze and happen to be around the area, do stop by for some Honey.  Just be warned it might not leave so sweet a taste when the bill comes.

Dinner (all the starters and a main) was GBP36.50 excluding drinks and service.