I find abbreviations quite interesting.

It is perhaps something which is more prevalent at work, on account of the very long names for processes, departments and people.  When used right it makes life more efficient.  Outside of the office, the short form also provide efficiency gains.  Life would be much more verbose without LOL (laugh out loud), ASAP (as soon as possible) and my personal favourite, YOLO (you only live once).

So taking into account the views of my friends, in particular that I should take a leap sometimes (YOLO), I ended up at Cinnamon Kitchen.  Touting its links to the lauded Cinnamon Club, it is an example of attempted expansion based on the laurels of its parent.  Not that it hasn’t been done before (see Gordon Ramsey and Jamie Oliver, no comment in this post about how successful those have been).  So YASJ (more about this later) person that I was, when I saw Cinnamon Kitchen had a special offer in January, I thought this would be my chance to visit with a lower amount of damage (money). 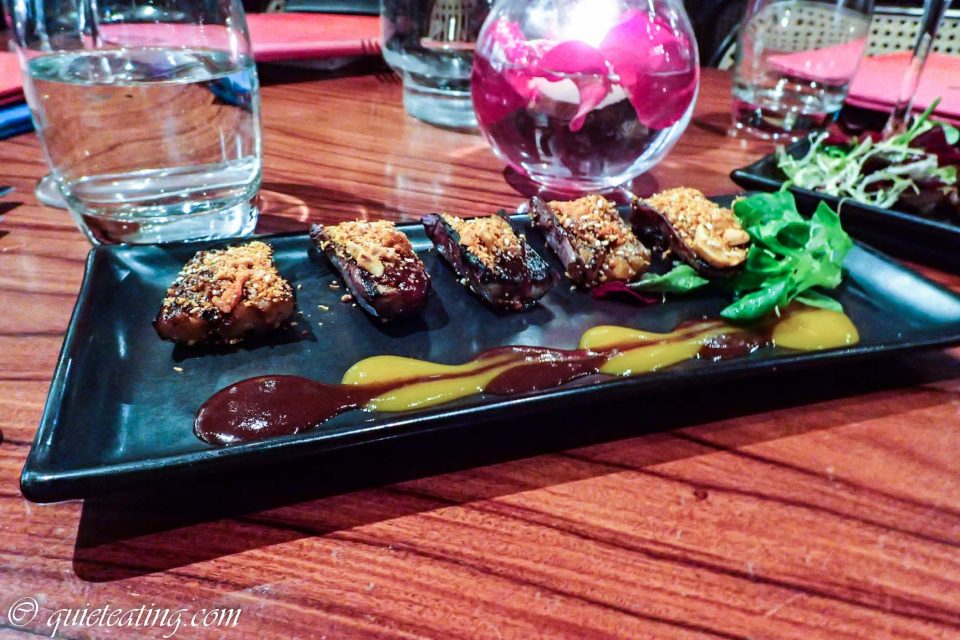 Aubergine with sesame, tamarind & peanut crumble.  Looked great but similar to many clothes I have seen, when I actually tried it, disappointment reigned.  It had too many things going on at the same time which unfortunately created a car crash of flavours. 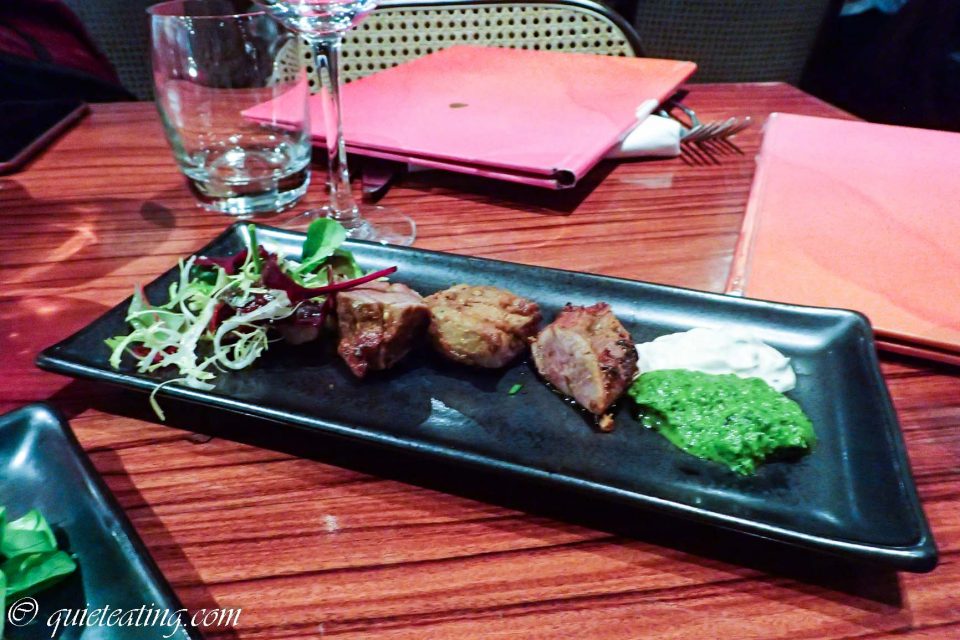 Chargrilled lamb fillet with pickling spices.  Perhaps a bit better than the eggplant but sadly rather tasteless.  Tasted almost as it had been boiled and then put under the grill for a minute.  The sauces were not enough to make up for the lack of cooking skill. 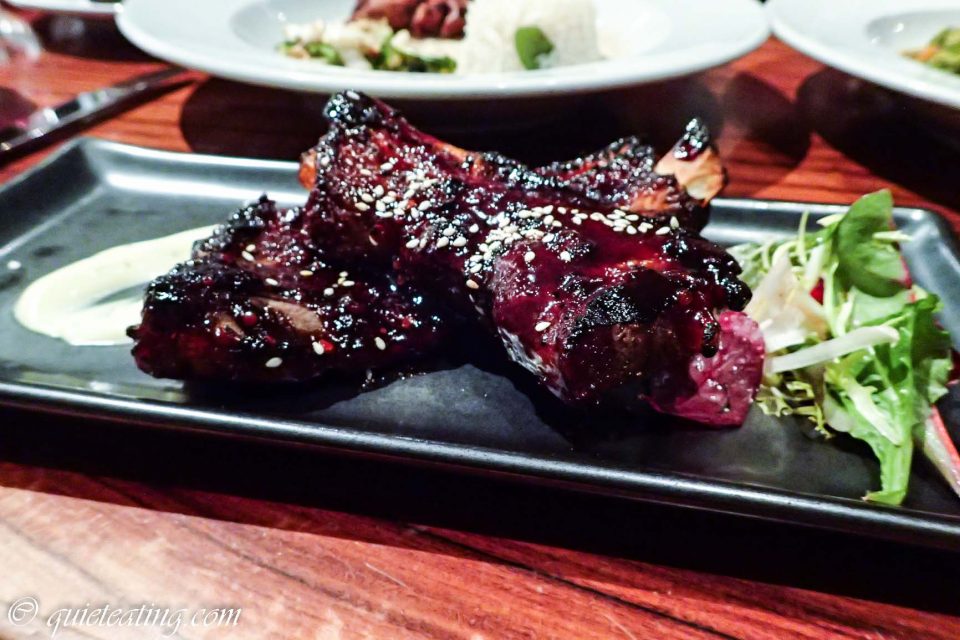 Chargrilled pork ribs with chilli and honey glaze.  Perhaps something better than the other starters but nothing special.  Rather insipid especially when considering the parting gesture of greens on the side. 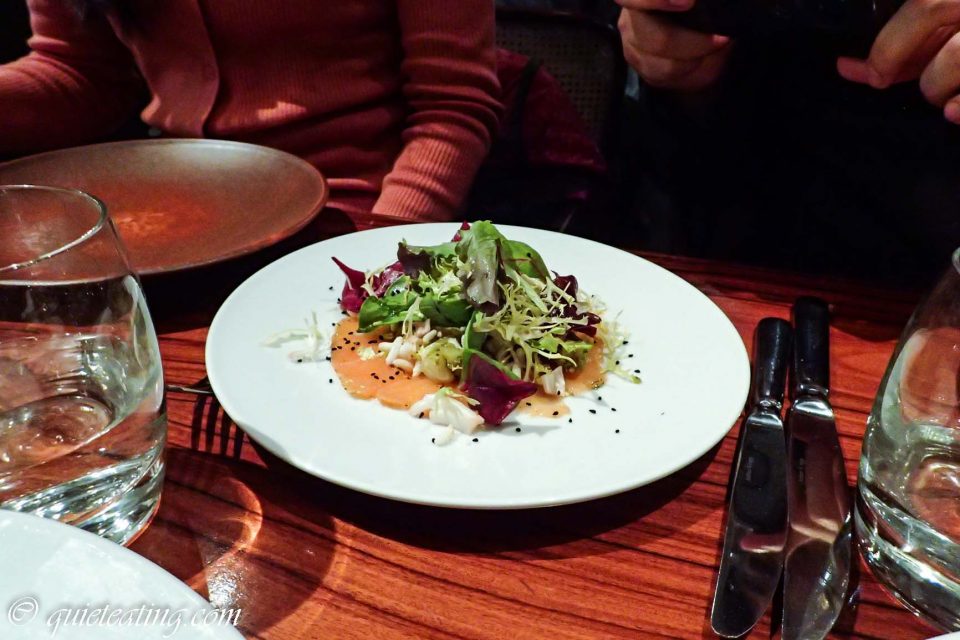 Organic cured salmon, green pea wasabi ‘jhalmuri’.  Perhaps an attempt to show culinary excellence by mixing in a hint of Eastern influence through the wasabi (instead of mustard), it just didn’t work that well.  Maybe perhaps because most wasabi in the West (and the East) is actually dyed horseradish.  The real stuff tastes rather different (and is rather more expensive).

I noticed at this stage of the meal that the room was less than half full.  Which made it rather inexplicable that it was so HARD to get a waiter’s attention.  My constant waving and gesturing often failed to gain the serving staffs’ attention.  Then again, maybe it’s just my face (or something on it).  In which case, I can’t blame them that much as my scowl darkened throughout the meal. 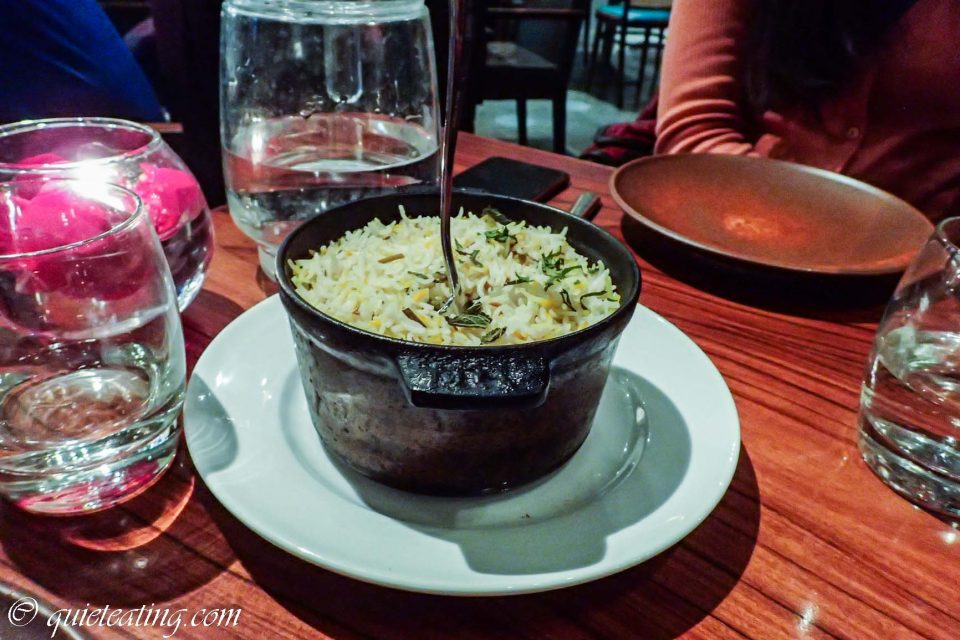 Hyderabadi style lamb with 24 month aged Basmati rice.  Served with a spoon sticking up in a statement that I have to agree with. As this was one of the better dishes of the meal even if anywhere else it would just be ordinary.  Here, among its companions, it was good. 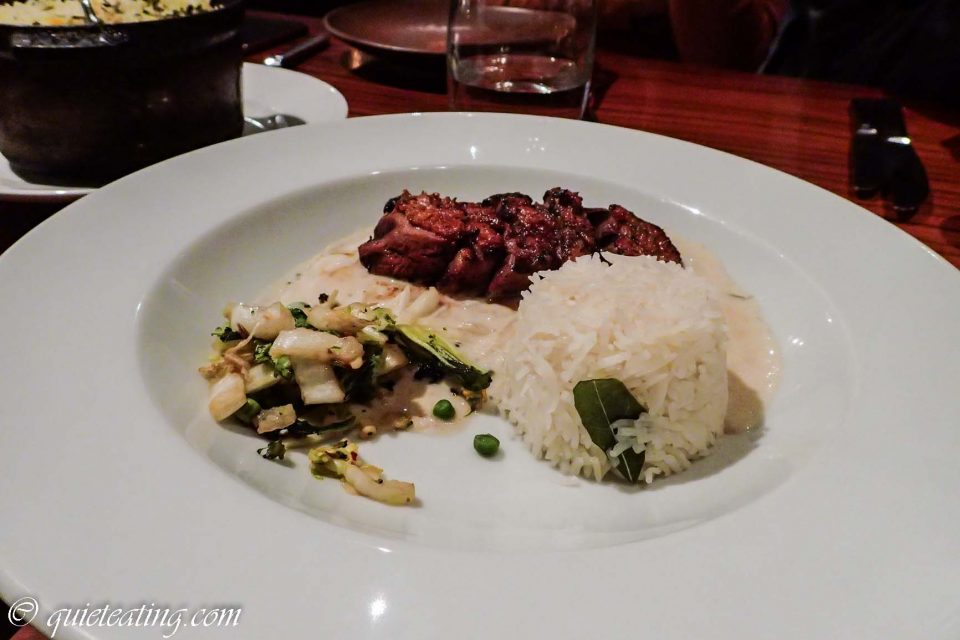 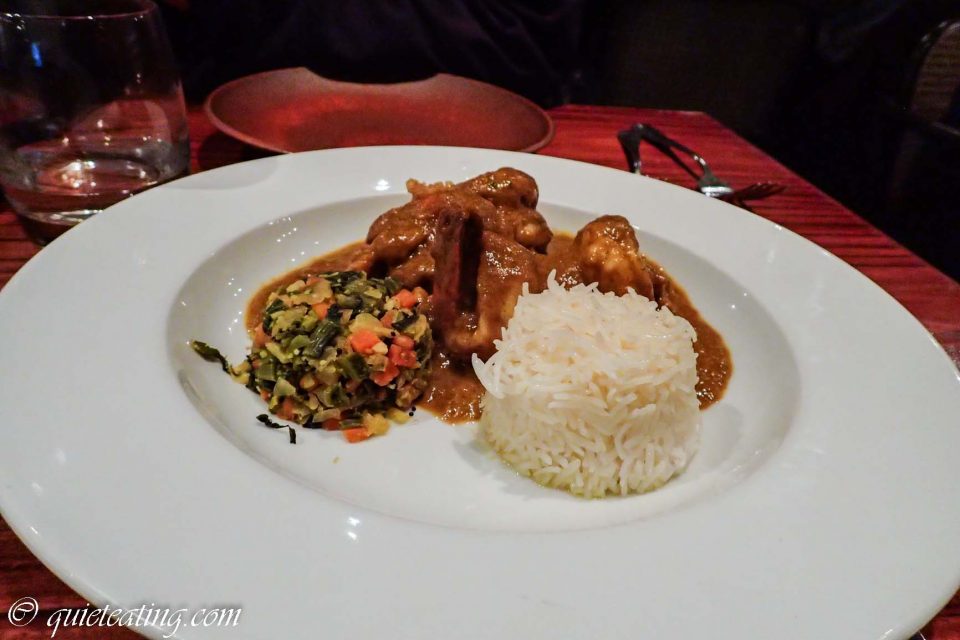 Tanjore style curry of king prawns, ghee rice, spinach poriyal.  Probably the best dish of the day.  Then again, that wasn’t particularly hard amongst present company.  Soft, tasty prawns in a creamy sauce.  Perhaps it tasted so good in comparison to what had come before.  Could have done with something more than the minuscule rice though. 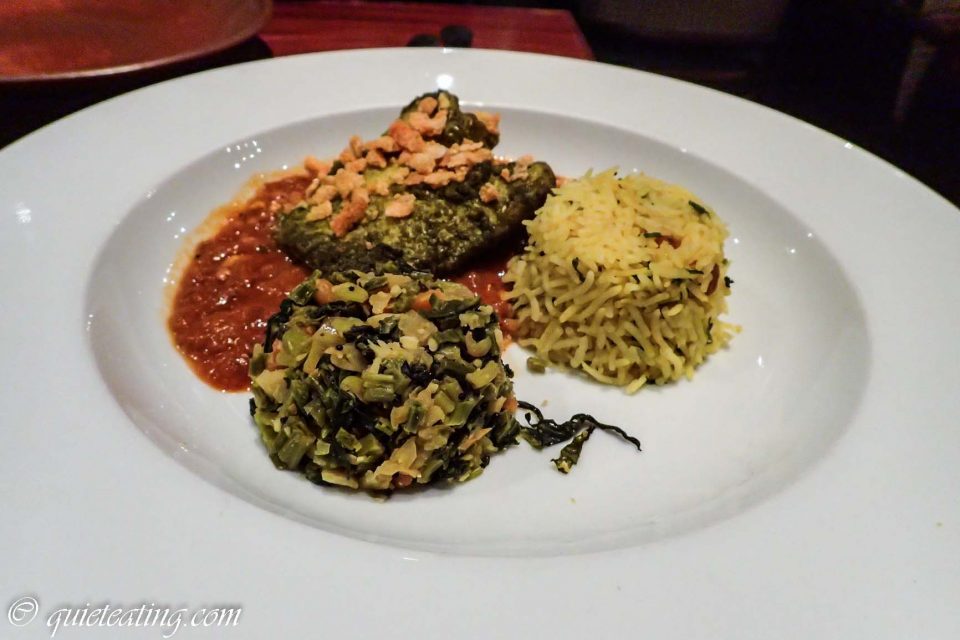 Green spiced monkfish with tomato tamarind sauce, lemon rice.  Perhaps a slightly weird meal, although the description promised much, it was instead just rather tasteless. 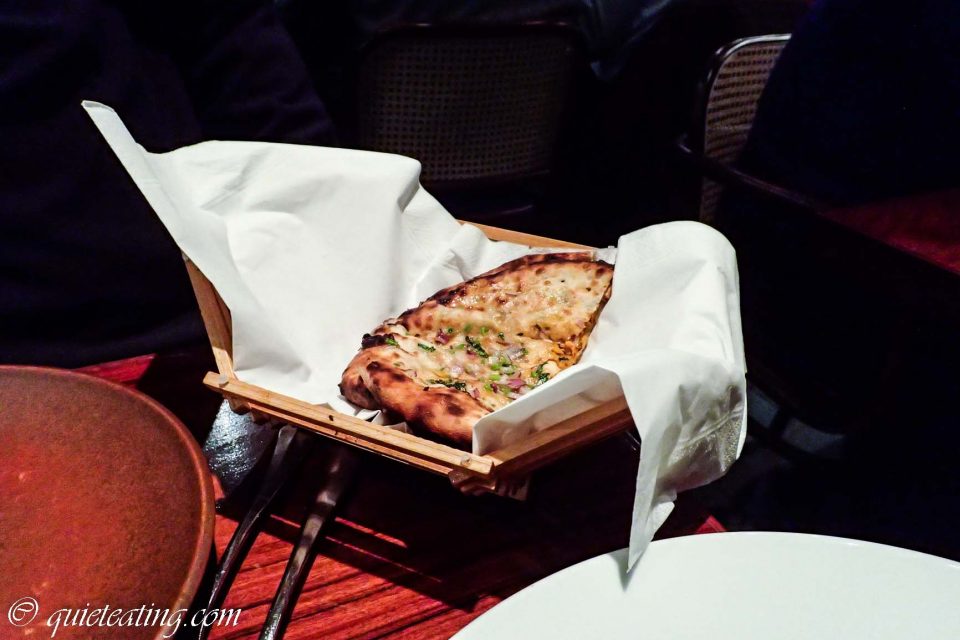 Chicken tikka with cheese naan.  Ordered out of curiosity, as it sounded a little bit like a stuffed pita or pizza.  It was worse than expected.  Soggy, dry and altogether unappetising.

It was at this stage, my hunger (if not tastebuds) sated that I tried an arduous task again.  Trying to get a waiter’s attention.  After strenuous exercise and pulling faces, someone finally deigned to notice me.  With such efforts for dessert, I thought that they better be good. 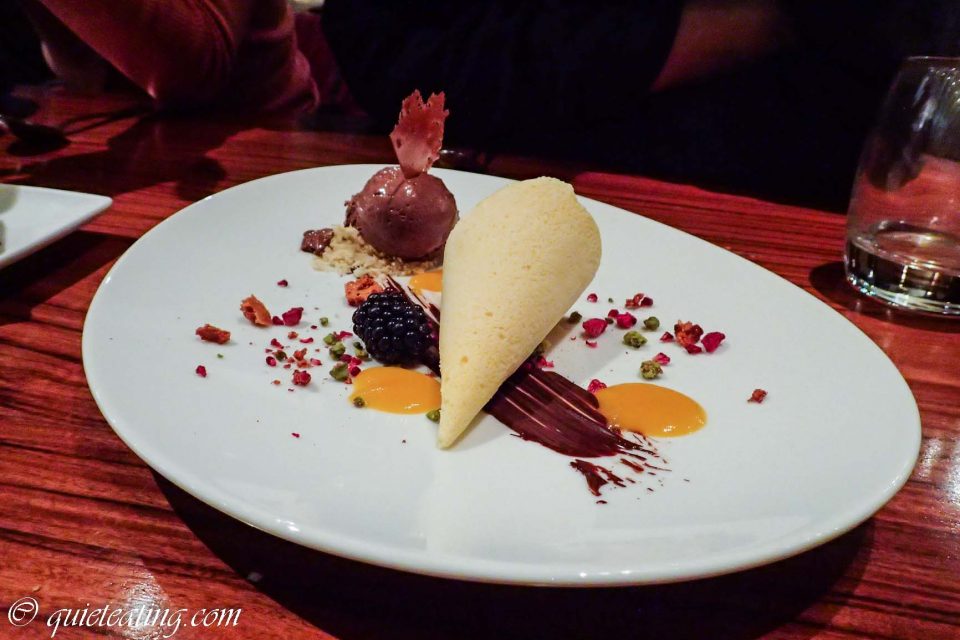 Saffron malai kulfi, honeycomb crumble.  A colourful desert on the eye.  A less than pleasant reception on the tongue. 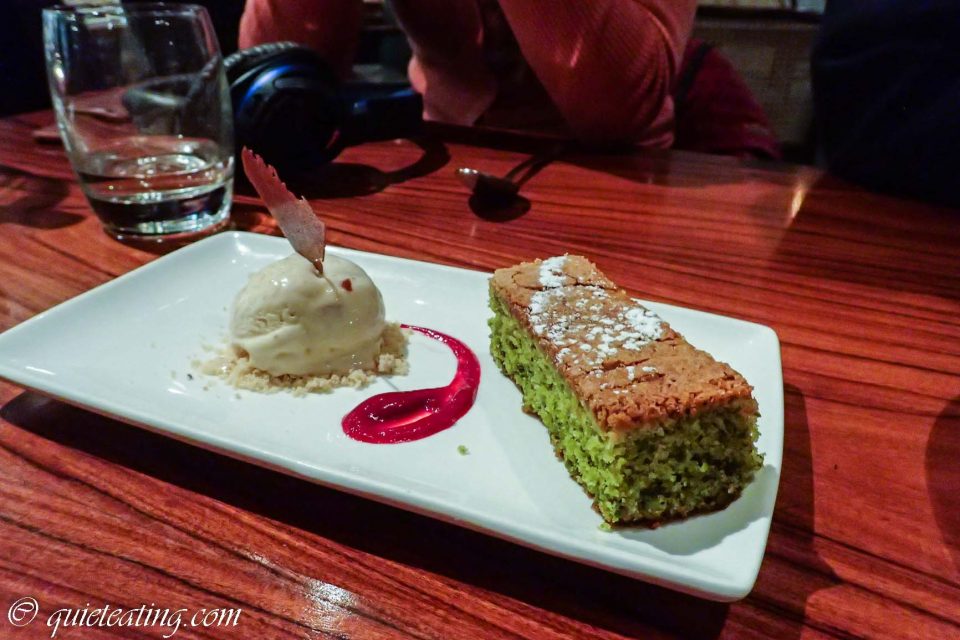 Spiced pistachio cake with peanut ice cream.  Actually rather good.  The was soft and moist, the ice cream with nutty hints.

Sadly, even the desserts failed to provide a modicum of reward for the effort of just getting them to arrive.  This contributed to how I came away in a less happy mood than I came in.  Food aside (small thing that that is for a restaurant) the service is so neglectful that I almost fainted of hunger.  Then again, maybe tortoise-like speed is on purpose so that the kitchen would not be overwhelmed by 10 tables worth of orders in a dining room able to sit far more.  Although on second thoughts, maybe if I had fainted in my food at an earlier stage, I would have been able to avoid the boredom of the rest of the meal.  Would have to faint in the right way though as if I drowned in my food, it would be an ignominious (although amusing) end.

So if you are still wondering, YASJ stands for young and stupid juvenile.  Not an entirely accurate description of me though as I’m not that young anymore.  However, as my choice of Cinnamon Kitchen shows, the other adjectives apply.  At least in this case.

Dinner (3 courses) was GBP24 excluding drinks and service and with their introductory 2 for 1 offer.