Bun.  No I haven’t lost it.  I’m just stating the translation of this creatively named joint serving Taiwanese buns.  I’ve found myself peering longingly into the original Soho branch but never been in on account of the monstrous queue.  So imagine my surprise at simply walking into their other branch up near Totterham Court road.  We managed to get a seat relatively quickly on a Friday at 6:30pm.  Maybe we were just lucky or people knew something we didn’t.  Wouldn’t be the first time I had been hoodwinked about food. 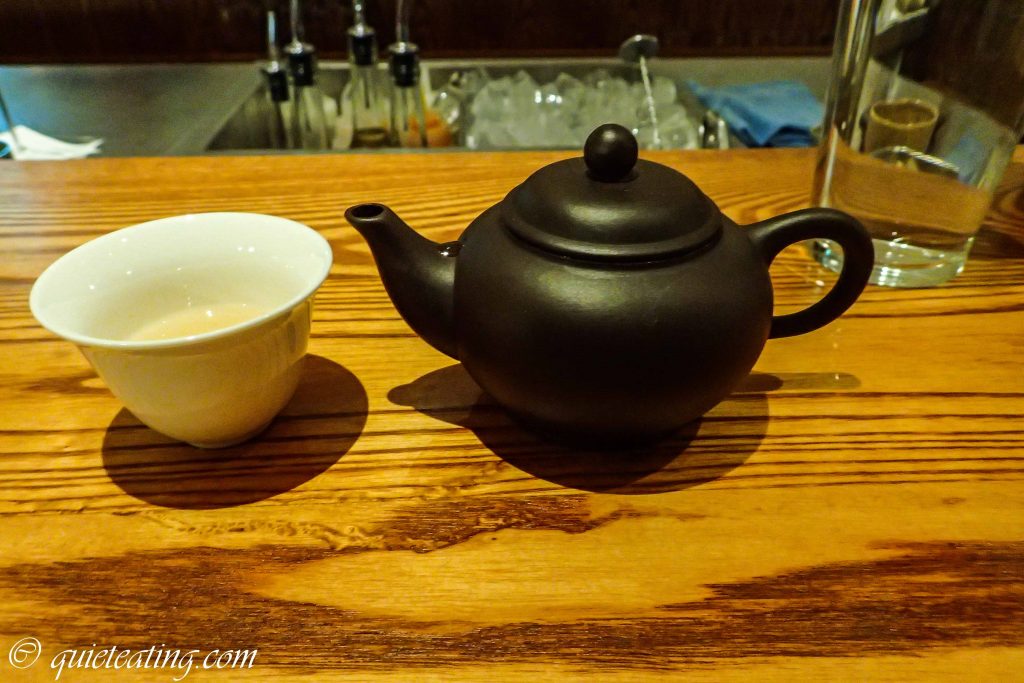 Green tea.  I was excited when spying this on the menu on account of its very small price.  It soon became apparent why this was so as the petite nature of this beverage was readily apparent.  Do not let the photo fool you, this was giving the word minuscule new meaning.  It was ok but nothing special but the size had my spider sense tingling. 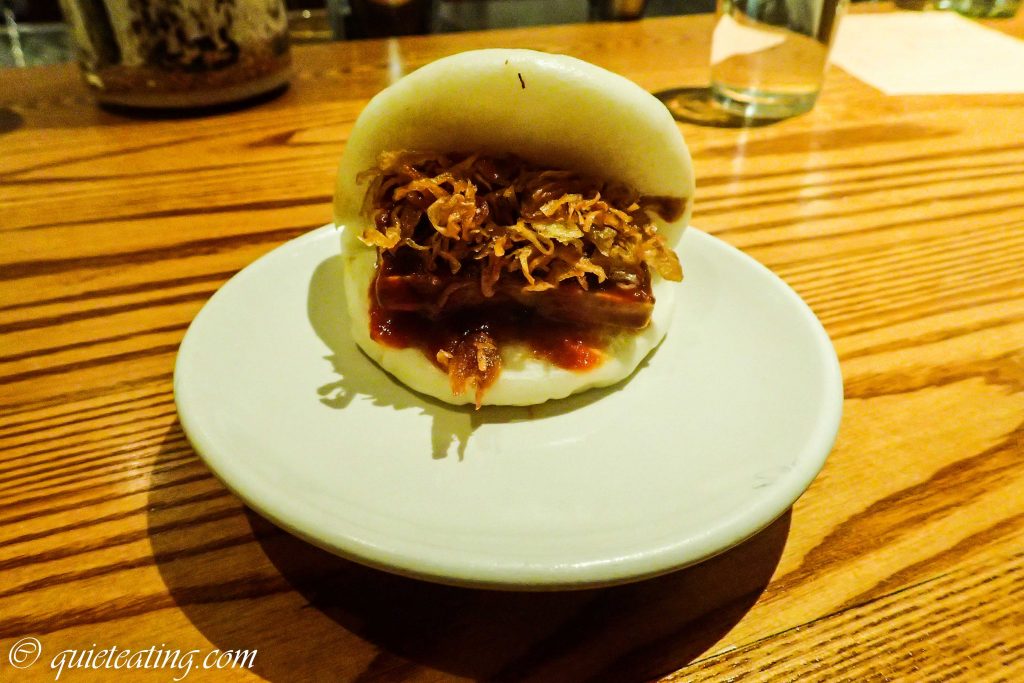 Classic, braised pork.  From such mediocre beginnings I found myself particularly surprised.  Let’s just say that I have never have I had such a fluffy bun.  I used to think I knew my baos from man tous, the soggy from the good, but this was something else.  Something better.  The pork did not as much melt in the mouth but transport me to another world.  As much as you might want to share the joy of this dish, it might be a bad idea as I soon found out.  Things can get messy as things fall apart.  Just tell your friend to get their own while you quickly demolish yours. 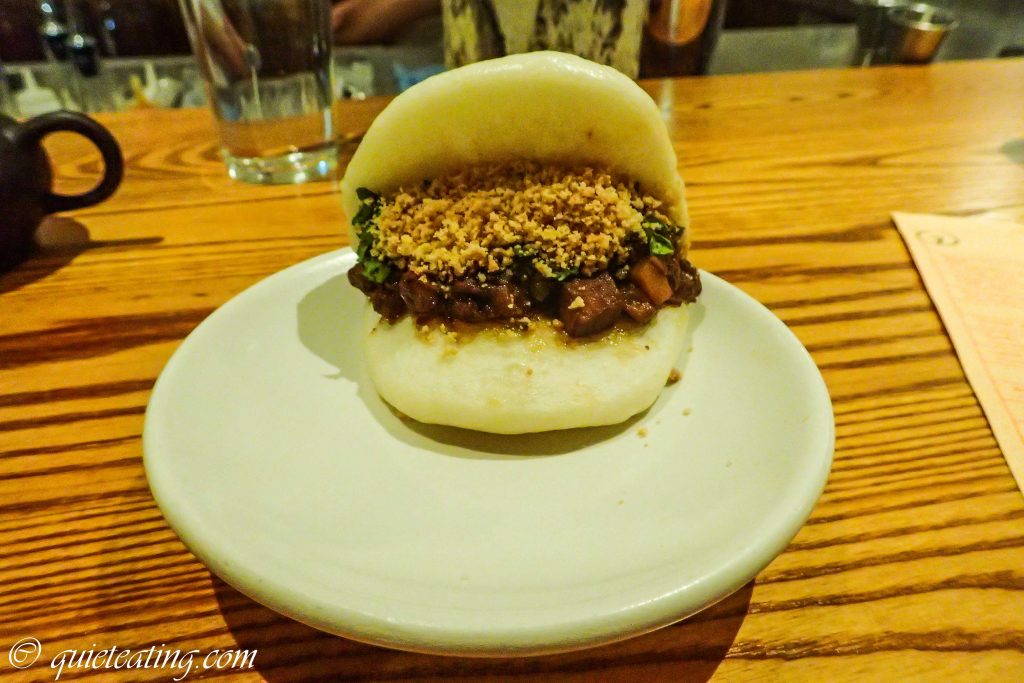 Confit, pork belly, crispy shallots and hot sauce.  Another take on pork, this was more delicate (as much as pork belly can be) and chopped up into small cubes to gel with the crispy shallots.  The only fault I could find with this was that the small delectable pieces dribbled out of my fingers when I tried to split things in half.  Again, not something worth sharing. 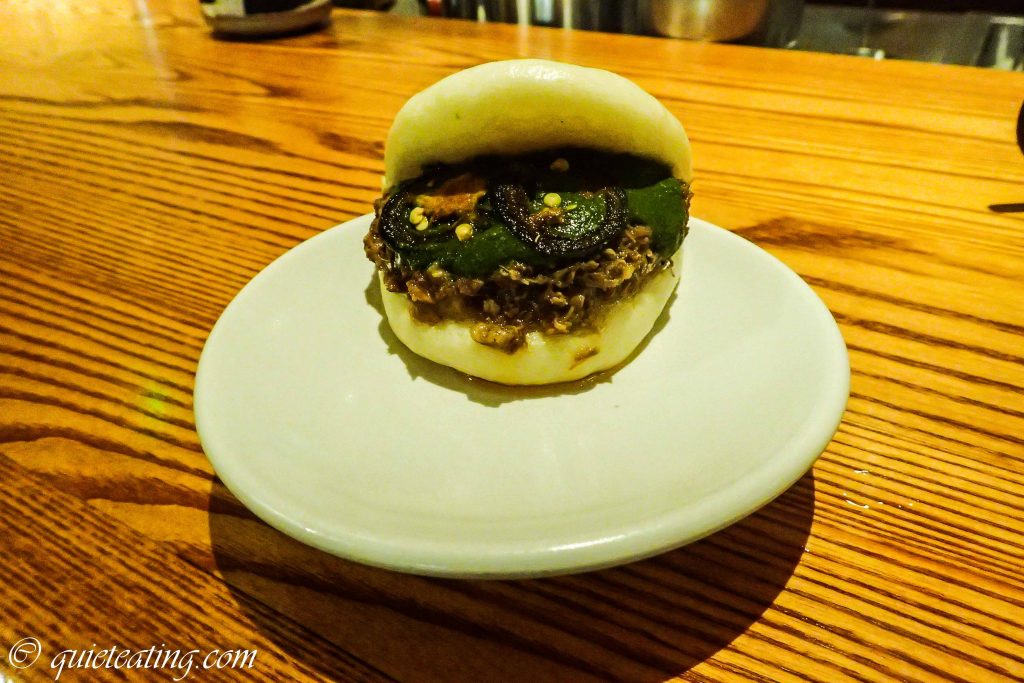 Lamb, shoulder, green sauce and soy pickled chilli.  Probably the weakest of all the baos.  Not that it was bad as it would have shone out anywhere else but against the heady heights of the pork, it just couldn’t really hold a candle.  With so many sharing failures on my behalf with messy endings, I should really just adopt the eating position of their mascot.  Greed is immediately gratifying and dividend delivering here as this gluttonous position has the great advantage of reducing wastage. 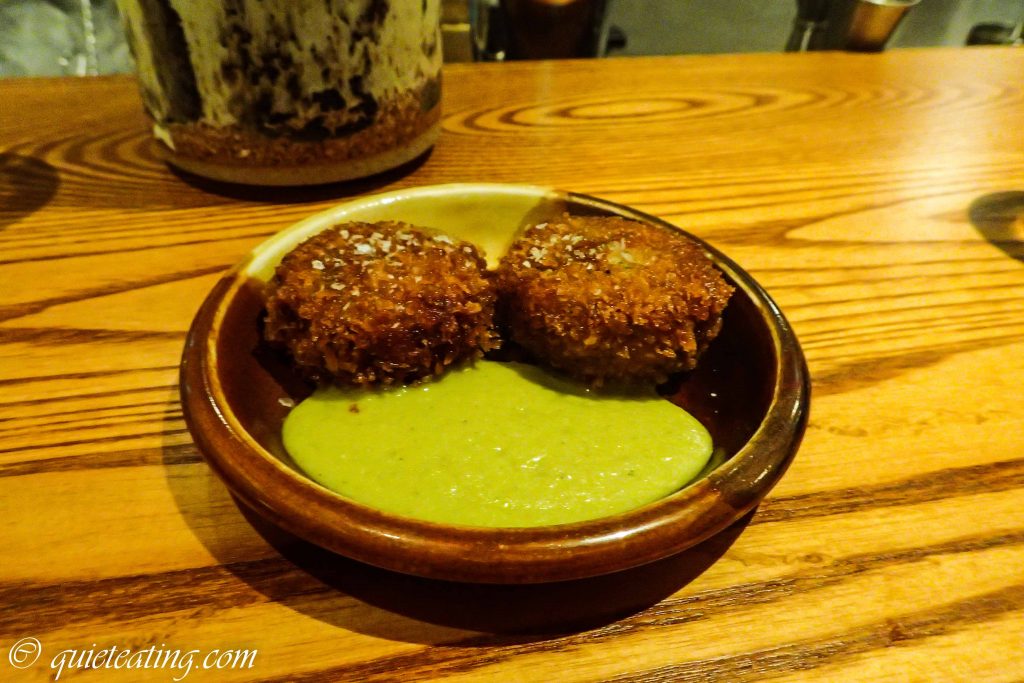 Beef cheek and tendons nuggets.  Although it was the baos which were the highlight, there were other things worth eating.  When I was a kid and didn’t know better, I used to love eating McDonald’s chicken nuggets.  These were like the adult versions with real flavour rather than reconstituted mutant chicken.  What made this even better was the lovely slightly spicy sauce to provide a welcome kick. 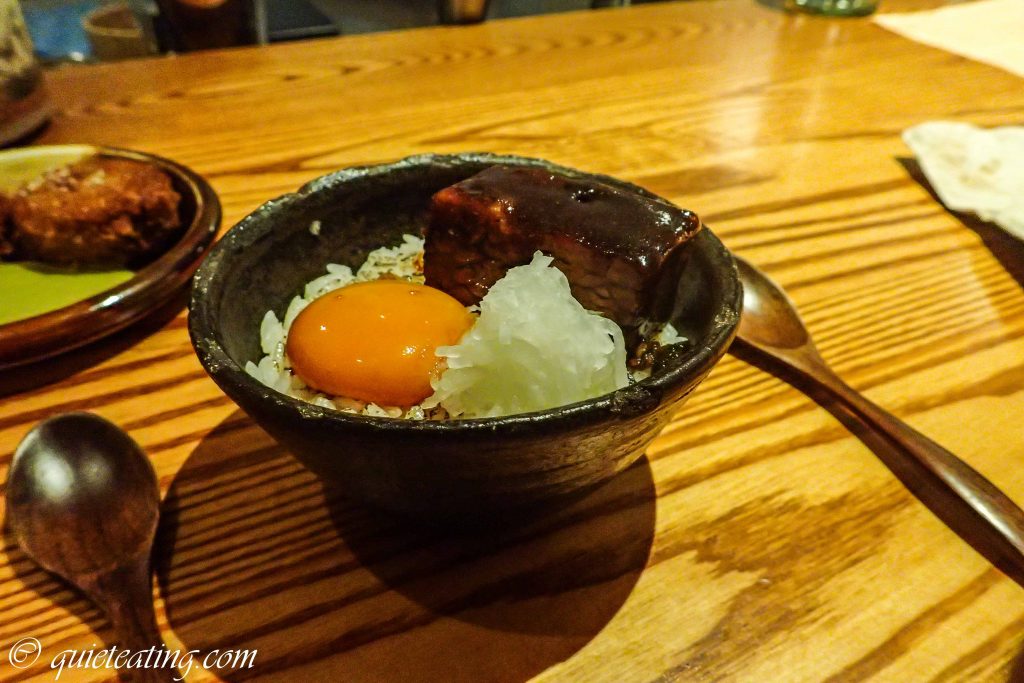 Beef shortrib, marrow and pickles.  This was proof that there is more to bao then well baos.  When everything was mixed altogether this dish threw me back to my days in Hong Kong quaffing glutinous rice down my throat.  This wasn’t so much a trip down memory lane but rather an express bus down the highway as before I knew it, I had gobbled it all down. 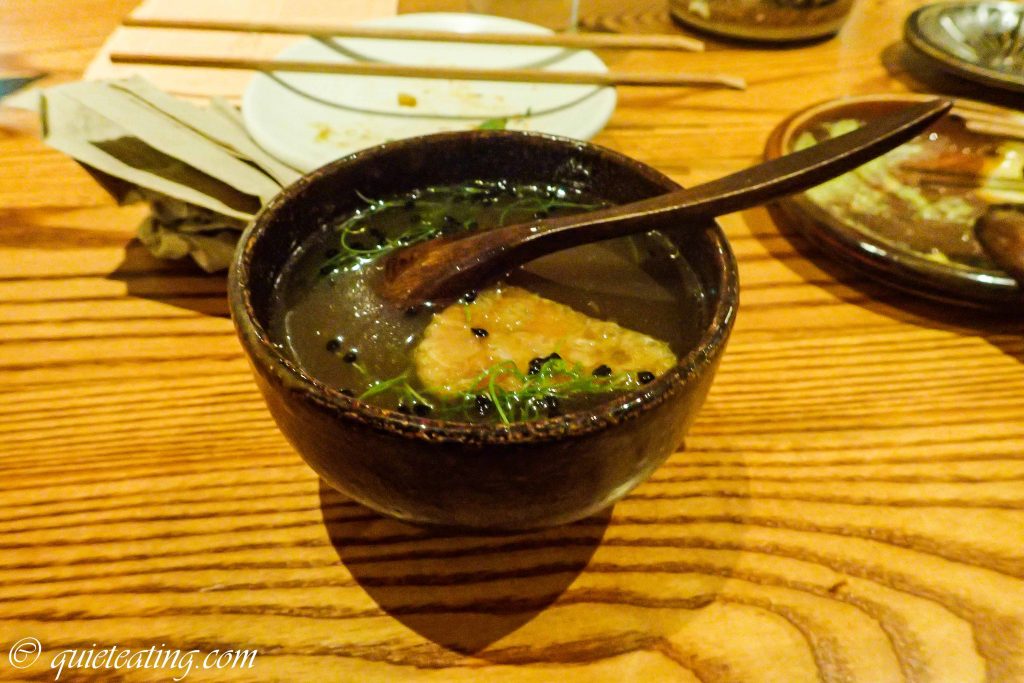 Smoked chicken broth.  Here I paused.  It was unfortunately a bit too salty which overpowered taste of anything else.  Others may prefer its light taste but unfortunately this is lost on me.  If I wanted salty water, I could go to the sea anytime. 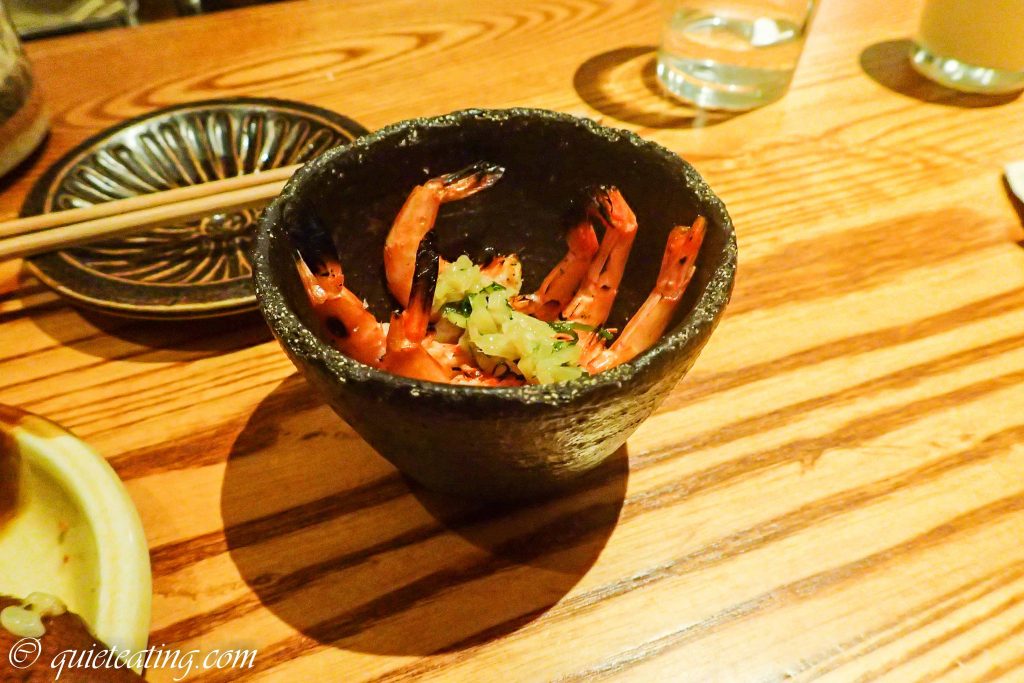 Ginger prawns.  I didn’t actually like these that much.  My dining companion begged to differ.  I felt they were just small and lacked real depth of flavour.  Apparently they are good if you eat them tail and all.  I’ll leave that to you then fellow diner.

Bao was mostly a restaurant of hits, although some of their dishes were not quite to my taste.  Yet, I am willing to give a restaurant with such an interesting logo the benefit of the doubt, in my culturally ignorant ways something I feel like a peasant in the big city for the first time with some food.  Their logo shows exactly what I now want to do if I return.  Of a man stuffing his face with one of their buns.  After all, as my friends complain, I have a big mouth.  If the dishes continue to be like this, I will happily oblige.