I am well acquainted with the word Brat.  Usually hurled as an almost expletive when I was growing up with my brother, it would not be my first choice for a restaurant name.  It brings back too many memories of rather rancorous arguments.

However, I would think that calling your restaurant after a word that might be likely to cause friction was not the intention.  Hopping on to google, I found the real reason for the name.

With that in mind, we had to go for that eponymous fish.  Yet, Brat is not a place for the faint-hearted as our waitress warned us that the portions were rather large.  Go for the Turbot (small) and you will be looking at 1.4kg of fish.  Go for the Beef Rib (small) and you will be served up with a rather impressive 1.8kg of cow.  This hinted that what they were aiming at was food and good food at that. 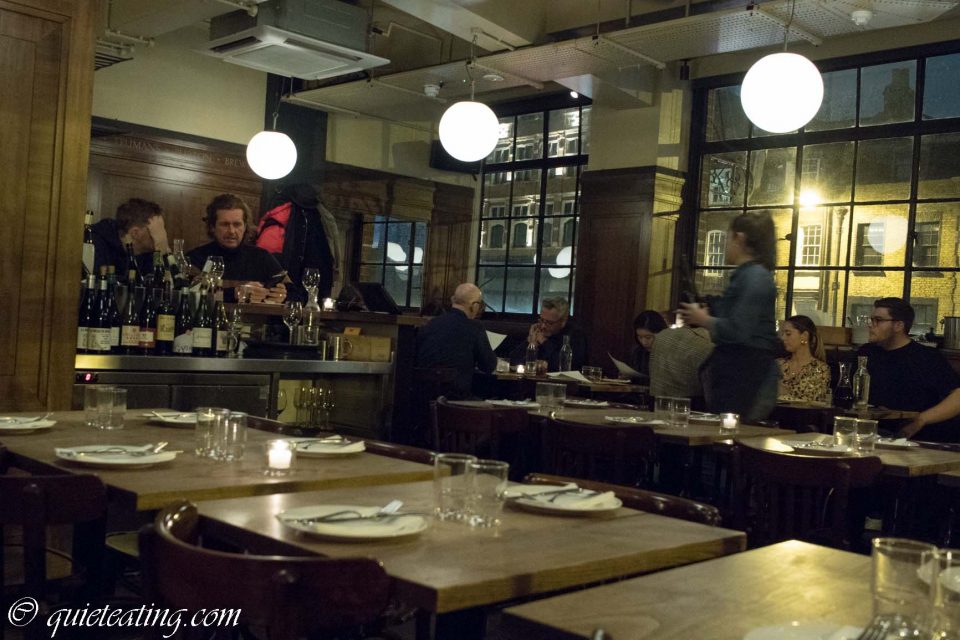 With a rather compact seating arrangement, it is clear that this is a place for serious eating.  Not lingering.  It wasn’t that the seating was bad but as the restaurant filled up, the decibel level continued to climb.  This open arrangement also carried over to the kitchen, where a roaring fire ended up pointing right at my companion’s back.  More on this later. 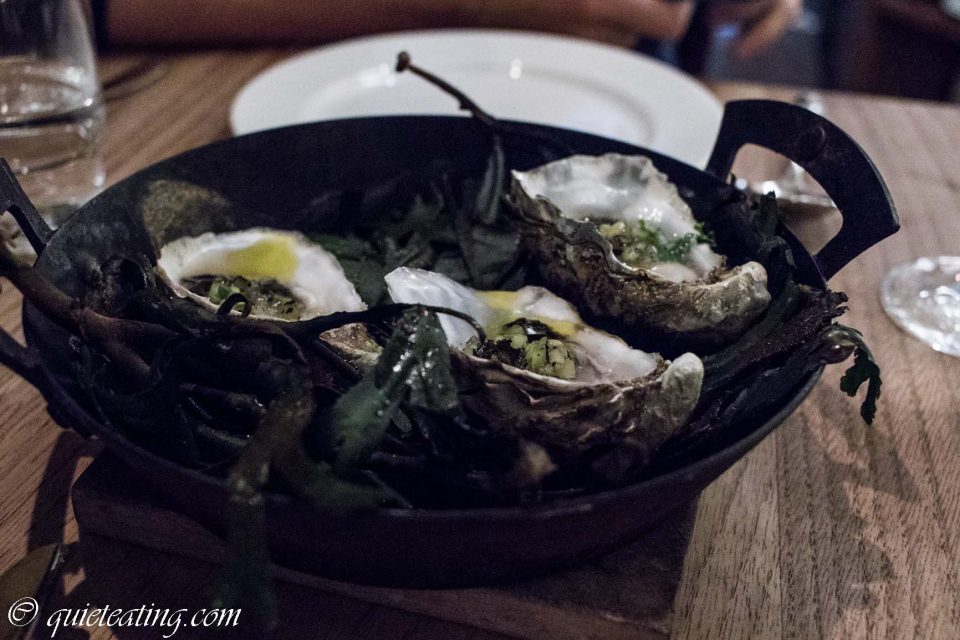 Oysters Roasted with Seaweed.  These were ok, if not particularly spellbinding.  Nicely cooked oysters cooked with delicately cubed herbs and vegetables, these were a pleasant start to the meal. 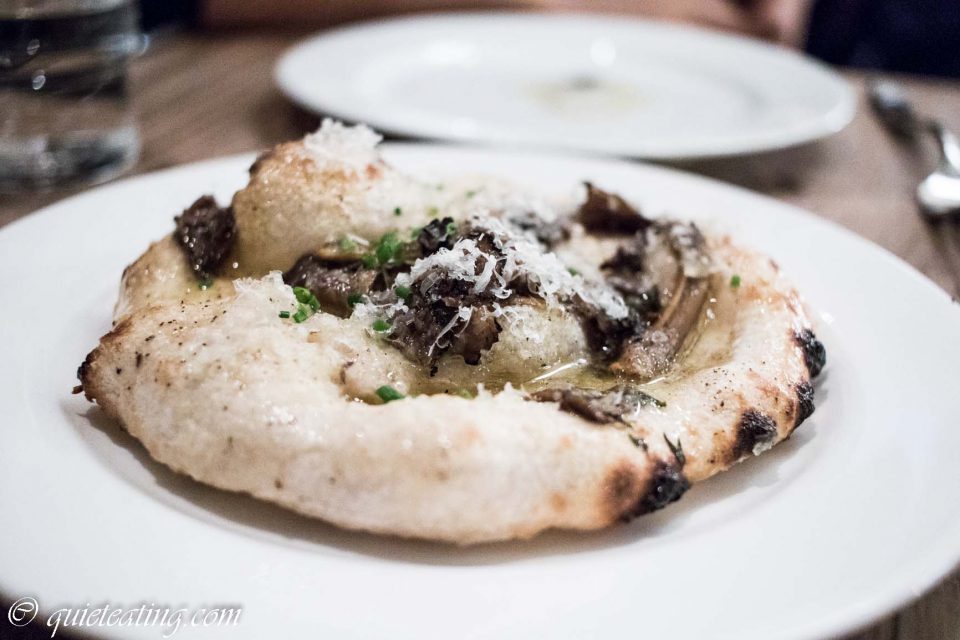 Grilled bread, Chanterelle, Berkswell & Truffle.  A nice alternative to the usual bread.  Served in a flatter and more chewy expression, this turned out rather well with bouncy dough offset by mushrooms, cheese and truffle. 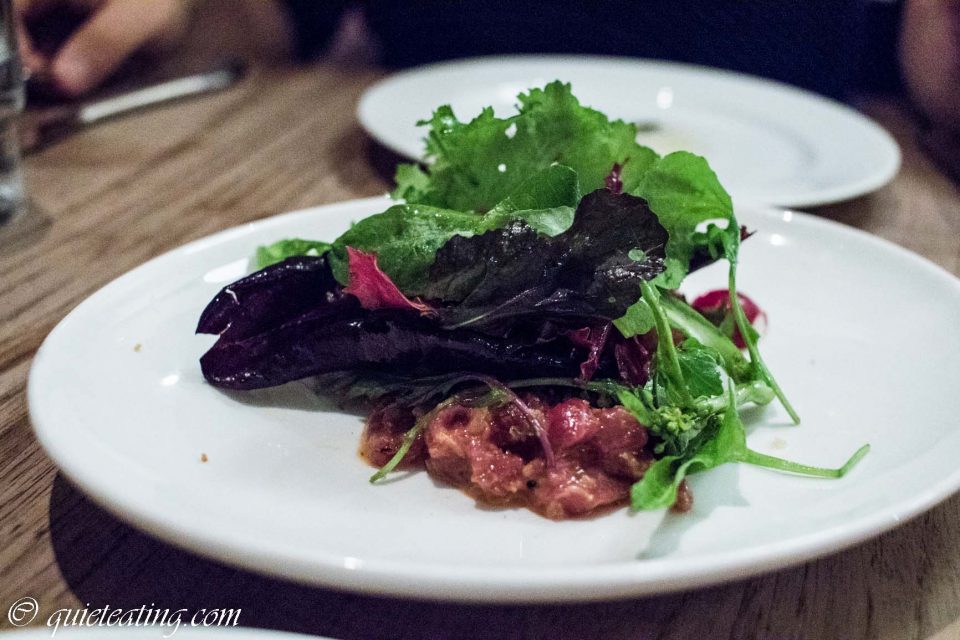 Moorland Beef Tartare.  Rather good, seasoned expertly, the clean taste of the vegetables mixed excellently with moreish bites of beef. 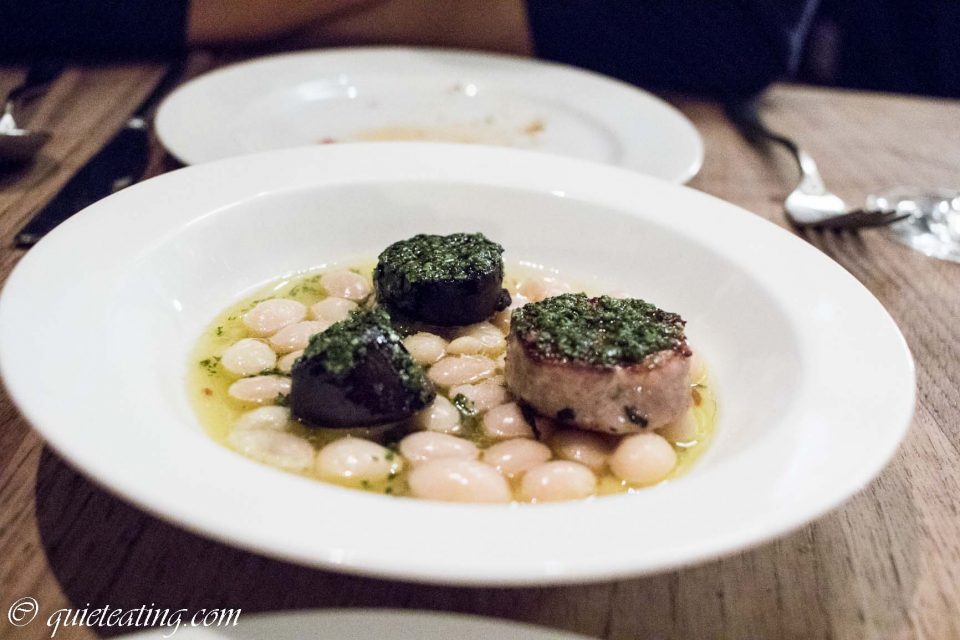 Wild Rabbit Sausage, Blood Pudding & Beans.  Sadly something more ordinary, the rabbit sausage was ok, the black pudding interesting but not particularly riverting.  Thankfully the beans lifted this dish up. 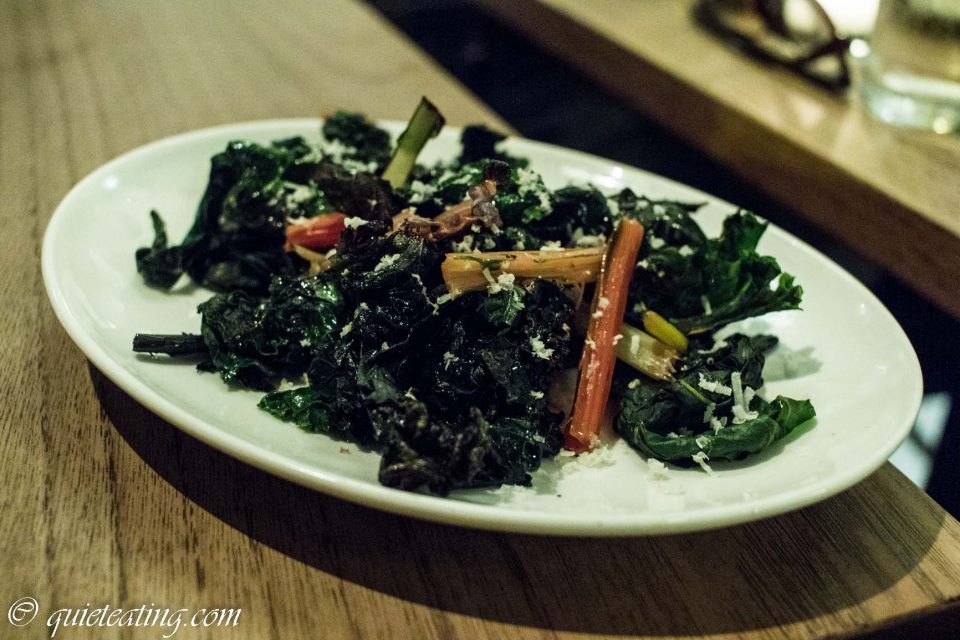 Roasted Greens.  Decent if nothing to write home about. 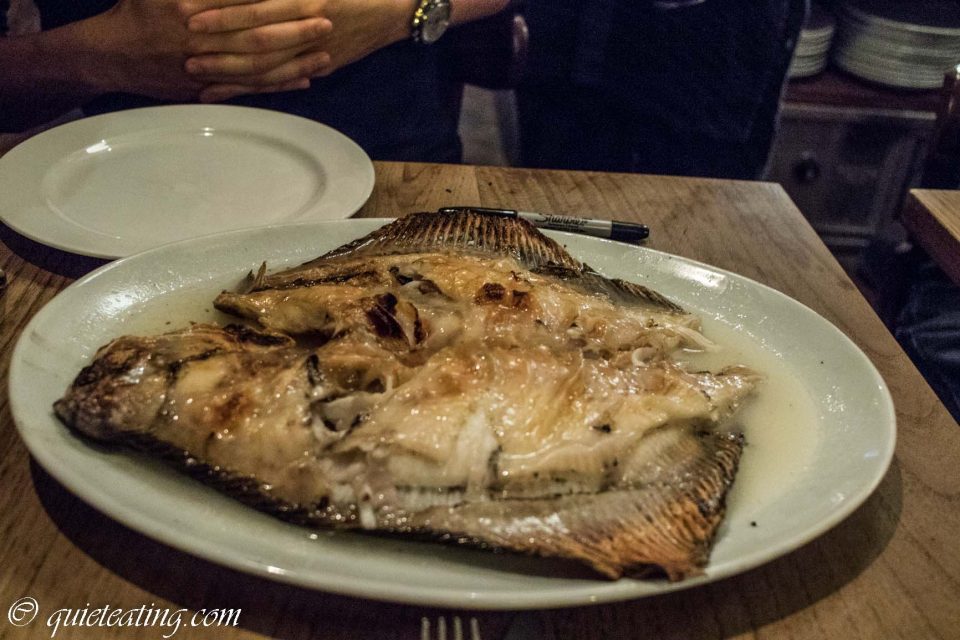 Whole Turbot.  When this arrived, the waiter helpfully took us on a guided tour of the fish.  The progression of pieces to eat and the differences in taste and texture.

At this point, I noticed a bit of sweat starting to appear on my friend’s face.  I inquired whether it was something a bit spicy in the food.  He replied that it was feeling rather warm in the room.  Wearing a wool sweater on top of a shirt, I would be warm too, especially if I had my back to the fire.  When I suggested that he remove his sweater, the reply was that would be a bad idea as when you cook things, moisture tends to seep out.  Even with his lack of hair, human cooling methods were not enough.

Following this suitable interlude, we manfully continued on and managed to finish the whole fish.  Our waitress was surprised.  I was less so as I knew my friend’s appetite, especially when he is sweating stuff out.  Makes more room for things inside. 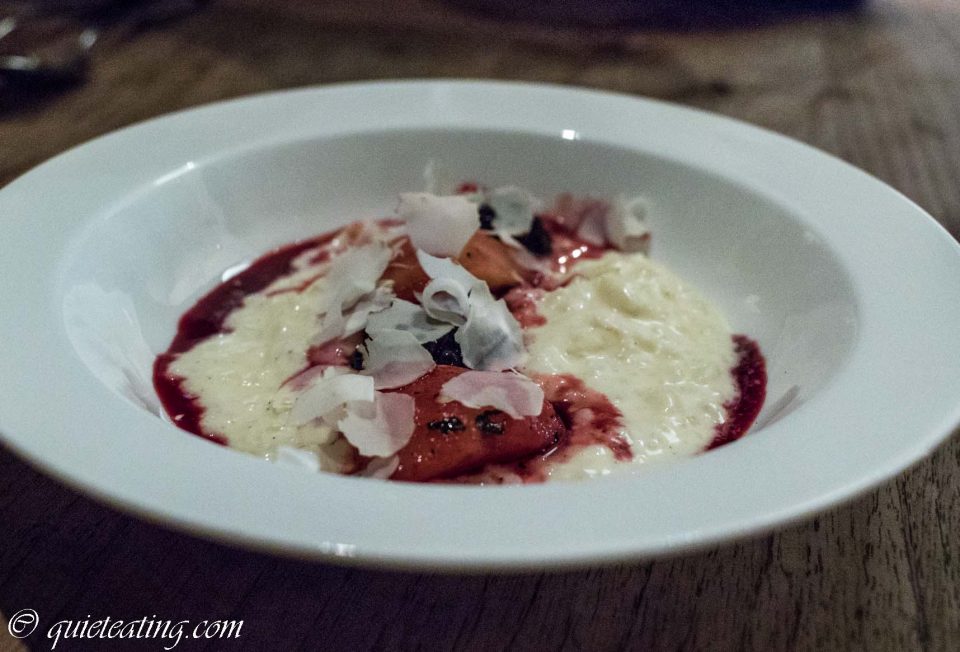 Rice Pudding with Quince, Berries & Chestnut.  Not bad, if nothing particularly special. 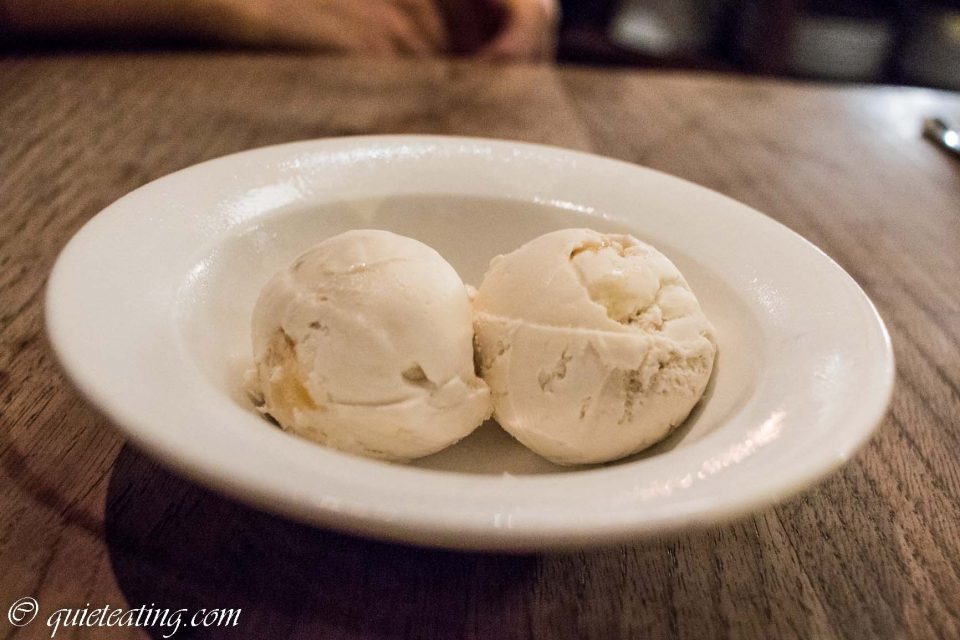 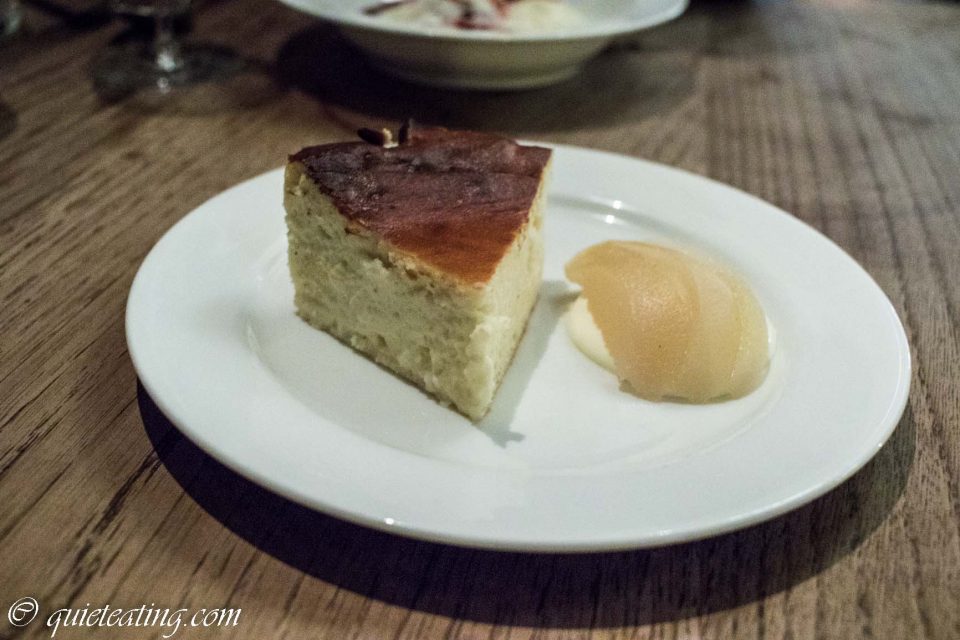 Burnt Cheesecake & Pear.  An excellent cheesecake which wouldn’t be out of place in a bakery.  Soft to the touch, almost ethereal on the tongue, together with the pear, it was something worth fighting over.

At the end of the meal, as I sighed my relief that the food had stopped coming, despite what people say, I do not have a black hole in my stomach.  Standards were generally high.  With some stand out dishes to make you hungry (although with more caution with the portion sizes) to return, I left with many things to consider (in addition to how I would roll home).  Chief amongst which was that if all brats were like this, I would have welcomed more siblings.