So I decided to try Wild Honey on a whim.  I had heard good things about it from others I know and wanted to find out how it was for myself.  Located near a restaurant I particularly like, the Square, the area seems to be a massive hub of fine dining in Mayfair.  A very civilized location among the period architecture but too bad the houses are out of my reach.  I guess I will just have to imagine I live there while chowing down at the neighbourhood restaurants. 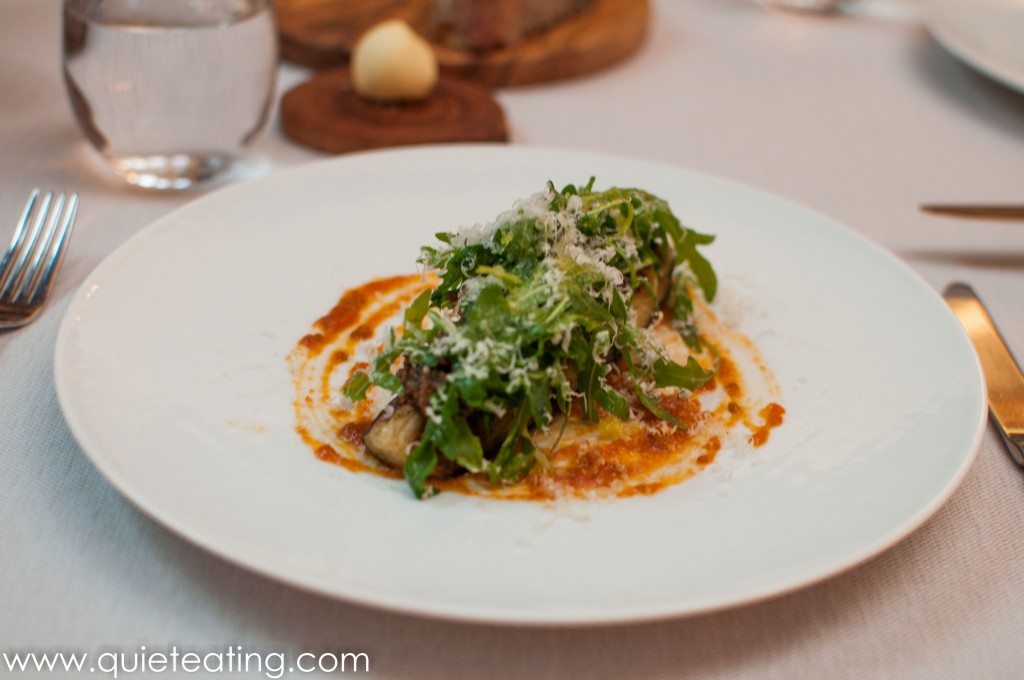 Aubergine ‘moussaka’ Wild Honey version.  I went for this as I love eggplant.  Artfully arranged with cheese and salad on top of the minced meat.  My mouth was starting to water already.  I was soon to discover that this would progress to a flood of tears as there was a little surprise in the dish.  A large shard of bone hidden as a treasure waiting to be discovered in the moussaka.  Having had my eyes opened from this event, as my eyes watered, I called over the waiter and asked him to explain this uncalled for addition.  I was in a cranky mood so I explained that I was a little traditional in that I usually expect such “surprises” to be absent from my food.  I waited an appropriate period for the waiter to explain how this happened but when no apology was forthcoming, I thought I had to remind them that I was still awaiting a response.  I then asked the waiter to bring back the piece of bone as I would like to have kept it as a souvenir.  The maitre d’ then suddenly arrived and apologised and said that they would be providing a dish on the house to soothe my now rather more scarred palate. 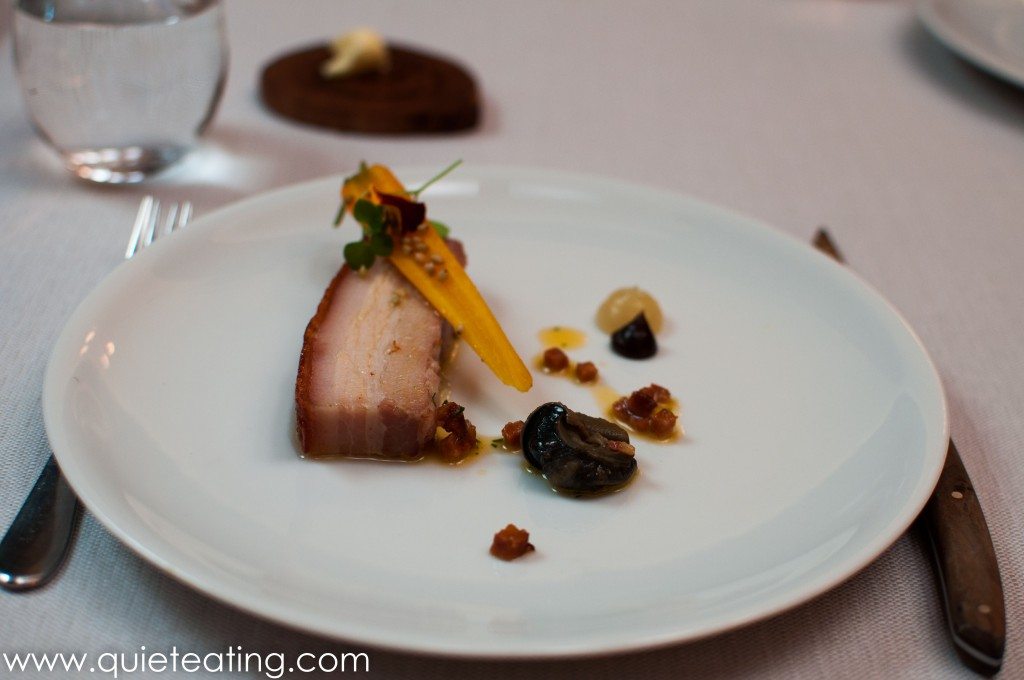 Pork belly.  Trying to overcome the trauma of the moussaka, I manfully attacked the pork belly in hopes that such a fatty piece of meat would be devoid of bony extras. This dish actually was to be the best of the lunch.  The pork belly was smooth with a crispy skin complemented by bacon lardons and mushrooms. 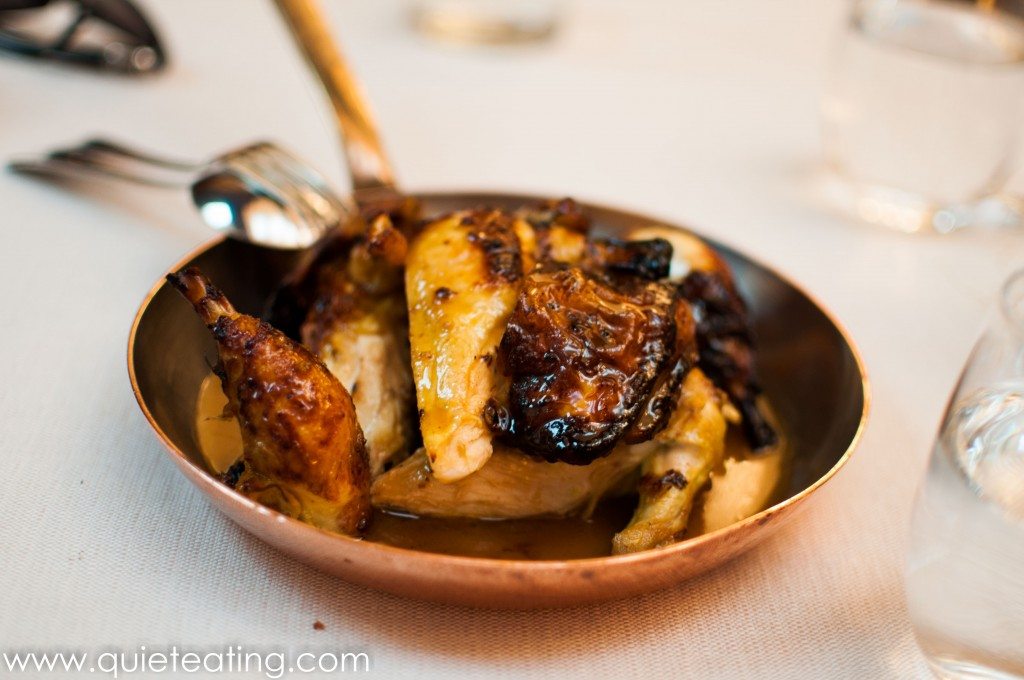 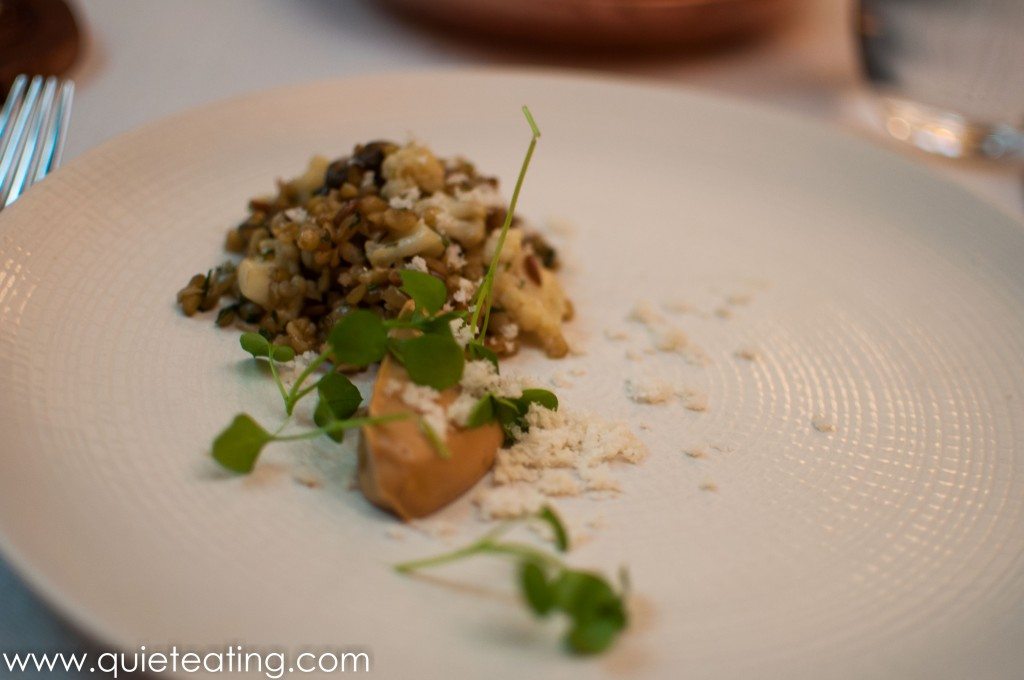 Freekah wheat and caramelised cauliflower puree.  I approached this with trepidation as I had been stabbed by my first dish.  Much more to fear from a less processed meat such as this chicken.  Luckily, the chicken did not contain uncalled for bells and whistles but as you can see from the photo, it seemed a tad too oily.  A surprise to me as I thought that a spit roasted chicken would avoid excessive lubricant.  The freekah wheat added an interested element to this dish giving it a very healthy flavour, or at least that is what I equate chewy and grainy tastes with. 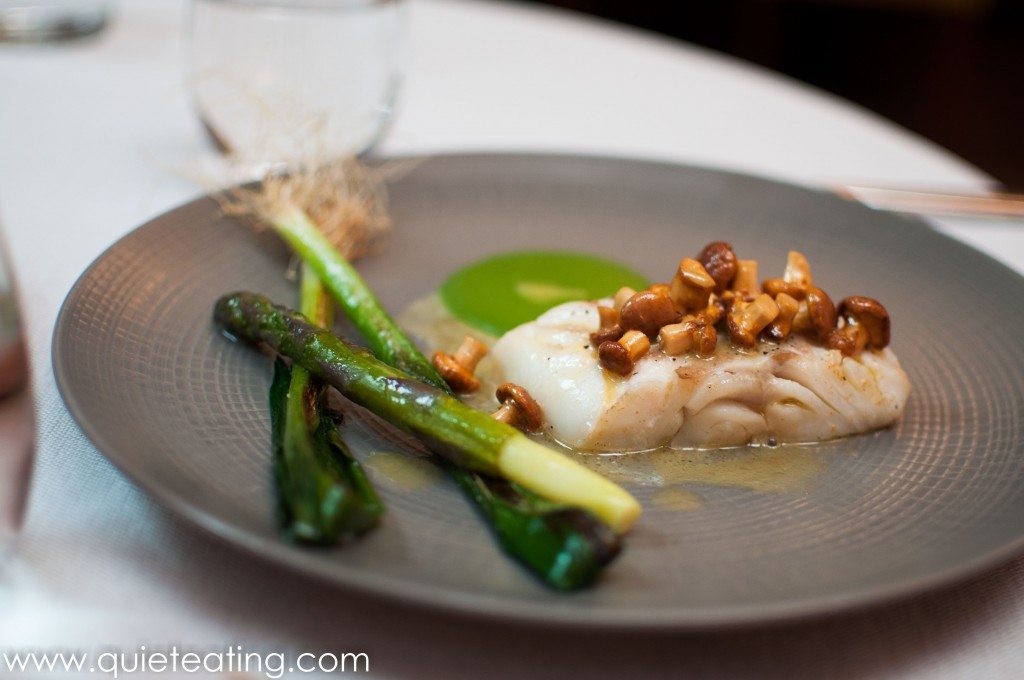 Cod, leeks, asparagus and girolles.  My friend had this and had no complaints about the cod.  Although the leeks defeated her attempts to saw them into bite sized pieces.

Wild honey ice cream with honeycomb.  Not bad and as one of my fellow diners remarked, honeycombs are great to end a meal on as they get stuck in your teeth and mean you can relive your meal by merely using your tongue to reach around your mouth.

Lunch was full of “excitement”, “surprises” and tears.  I will not soon forget this emotive experience even with the staff’s half-hearted attempts to otherwise cheer me up.