So I heard rumours that there was a fantastic place near Green Park.  So I just had to investigate things for myself.

Not the usual type of food that I would eat, it was Peruvian.  It had quite sharp complex flavours on top of rawer food than the English palate is used to.  Not having experienced Peruvian things before, I went with an open mind.

First off, I must apologise for the crummy photos.  I left my camera at home so I had to resort to my camera phone.  Good it is not… 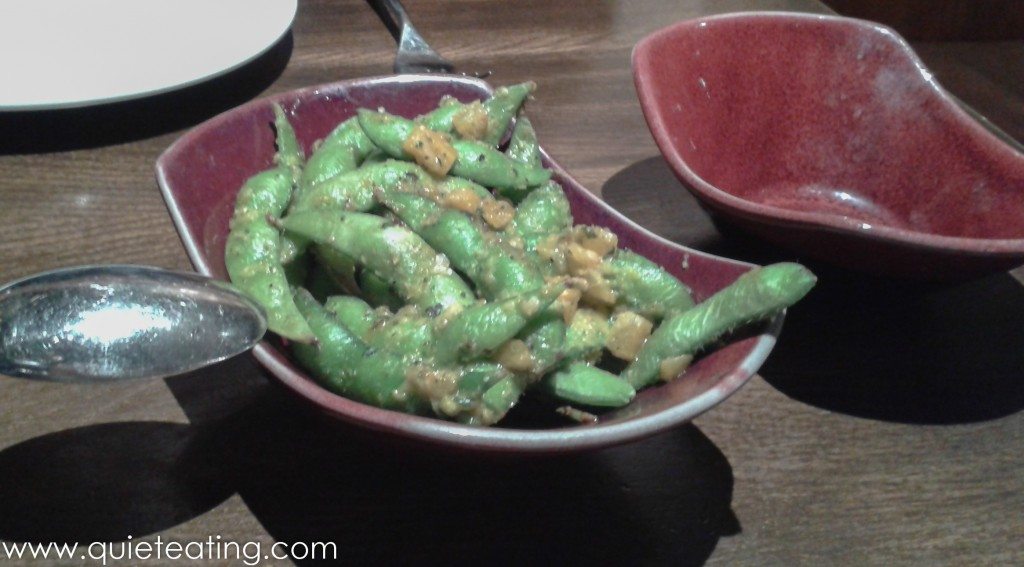 Edamame – It’s been a while since I’ve had these, a nice snack preparing me for the real deal.  Pleasing and salted just right.  Even for me to whom exposure to exessive drying agents has a generally negative result. 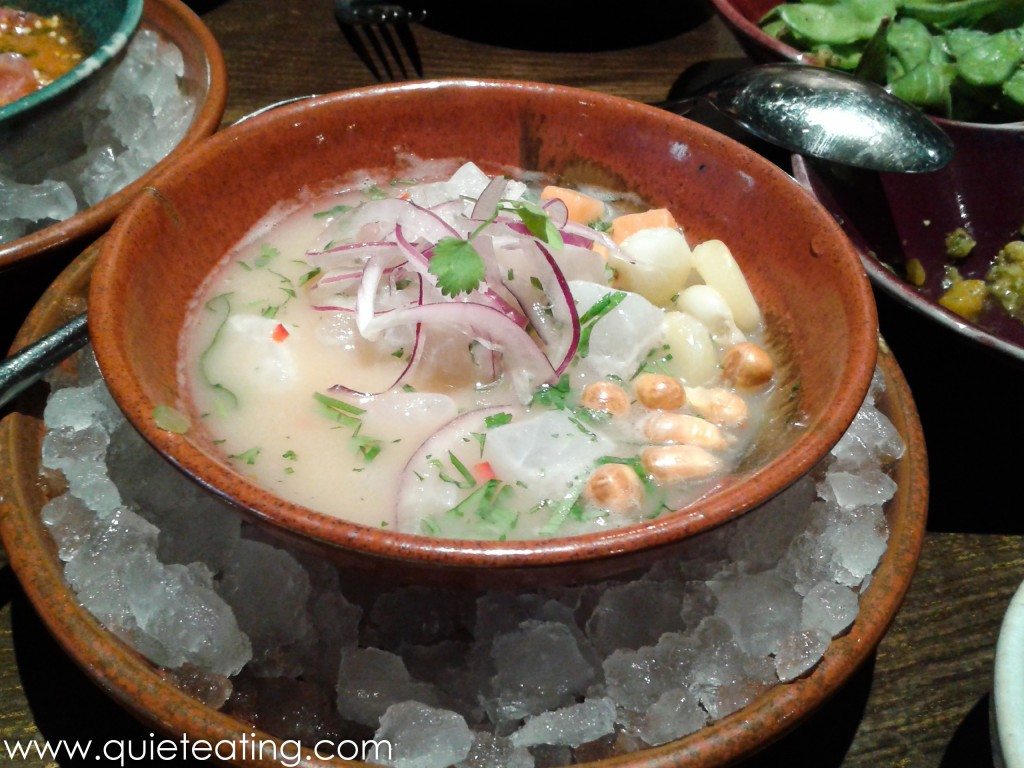 Seabass ceviche.  Well done with a zesty zing.  The seabass was fresh and nicely cubed and went well with the citrus sauce. 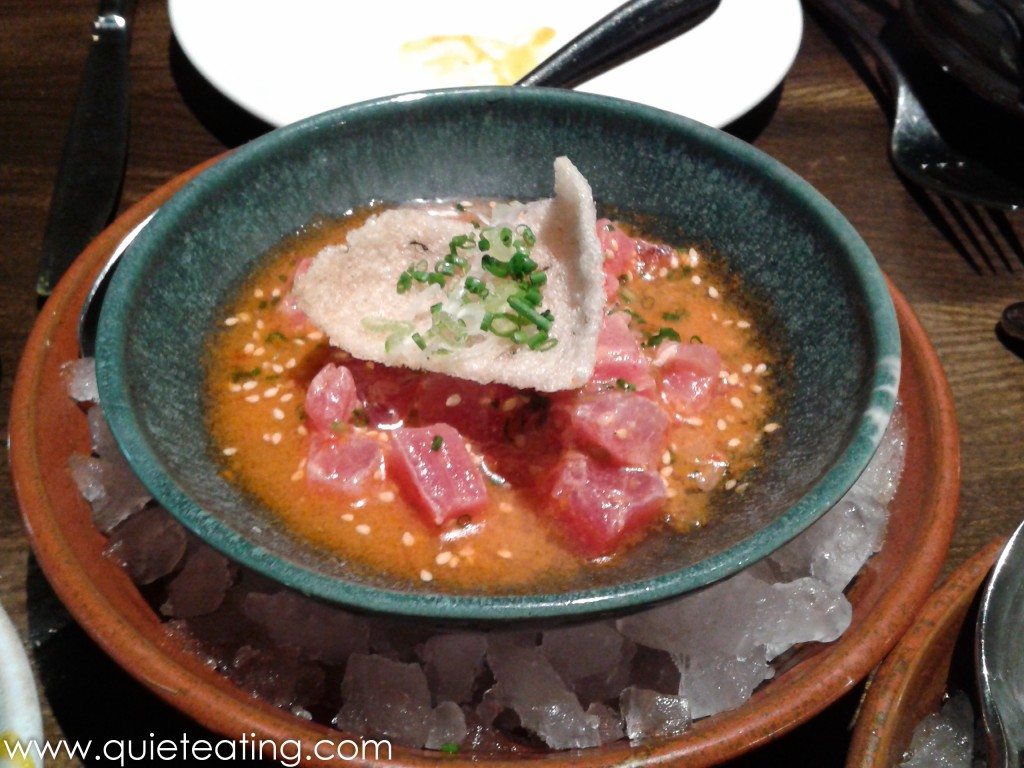 Tuna chifa, which is also raw fish with a heavier, nuttier sauce.  It packed a meaty but clean flavour. 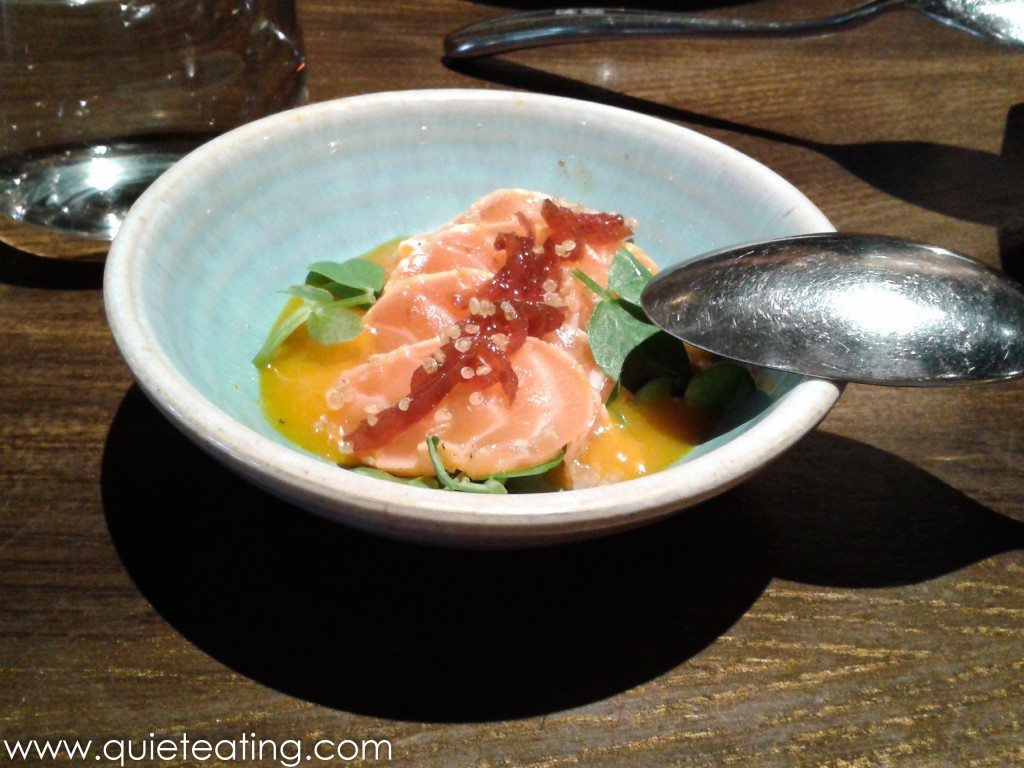 Salmon tiradito.  Salmon, my favourite fish actually, which probably explained why I treasured the yellow sauce almost as preciously as gold.  Too bad there wasn’t more to go around. 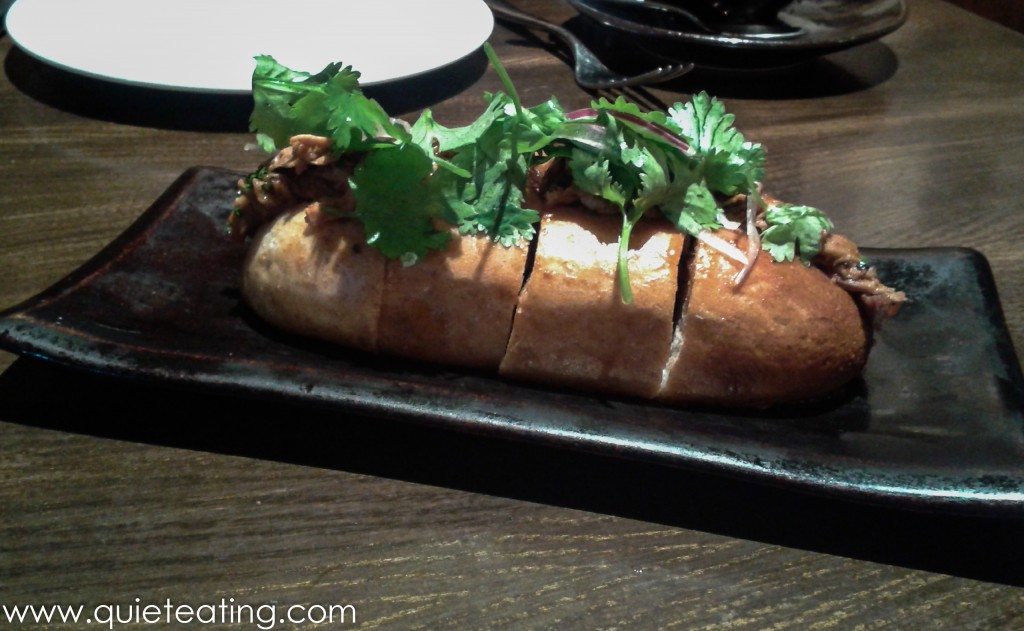 Chicharron pulled pork with chilli and salsa.  Pulled pork seems to be all the rage these days but often seems to lead to hyperbole.  I remember once trying to be tempted by a restaurant owner over a pulled pork sandwich.   I was immensely disappointed that it was actually just some generic ham.  But what can you expect for GBP5?  However, this was the real deal, so my tummy was happy.  Although the Asian in me noted that it could have done with stronger chilli.  I didn’t even feel a tickle in my mouth. 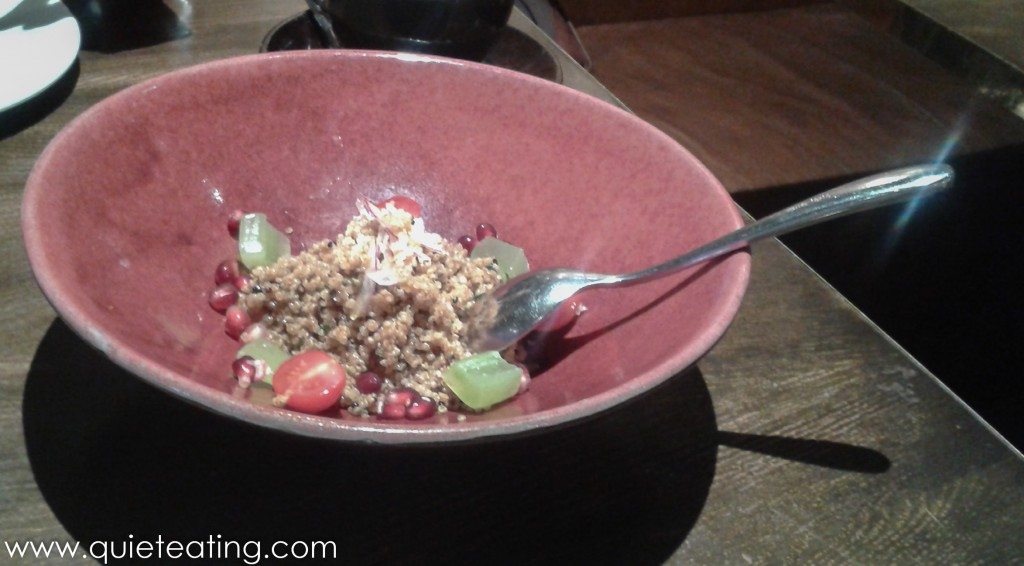 Quinoa salad.  Now I have heard that quinoa is apparently the new super food.  Just by touching it you will lose 20 pounds (weight and sometimes money).  This was my first taste of this new trend and it tasted close to brown rice to me.  Interesting but not earth shattering. 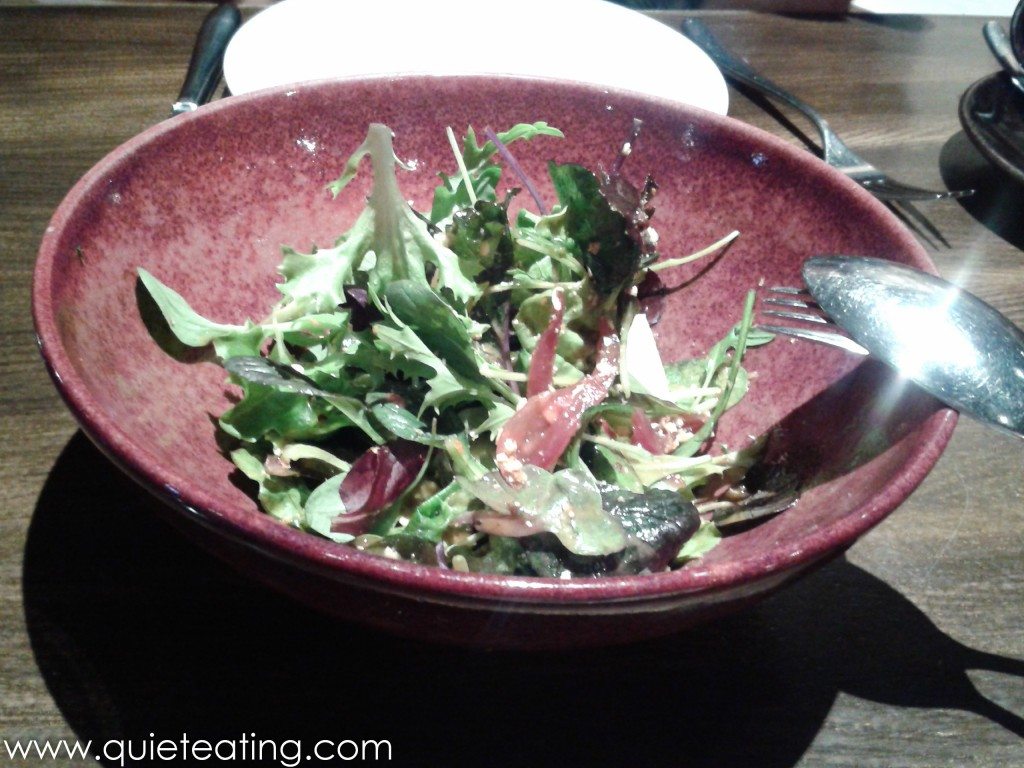 Ensalada Peruana – Peruvian beans, lettuce and radish.  The healthy salad option.  Light and healthy tasting.  Not something I could really appreciate given my caveman tendencies (more meat for me *beats chest*). 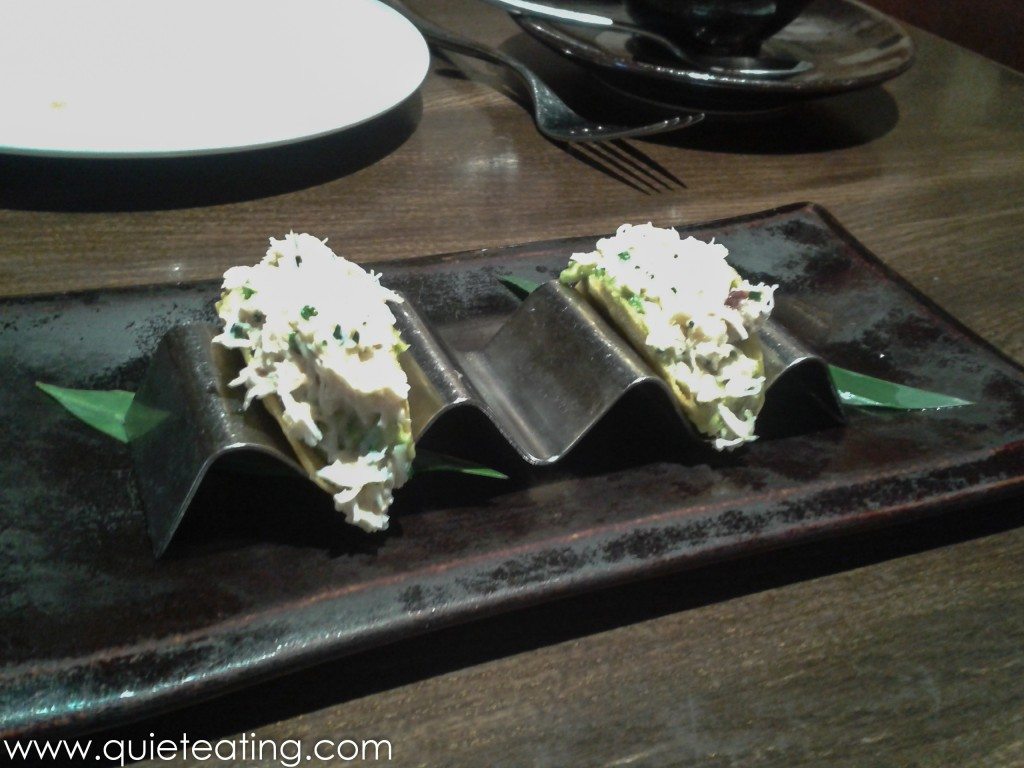 Crab and avocado tacos.  My phone camera wasn’t up to the task as it overexposed these shining examples of tacos.  I think these were easily the best dish of the day with delicate crab mixed with avocado and mayonnaise in just the right amounts. 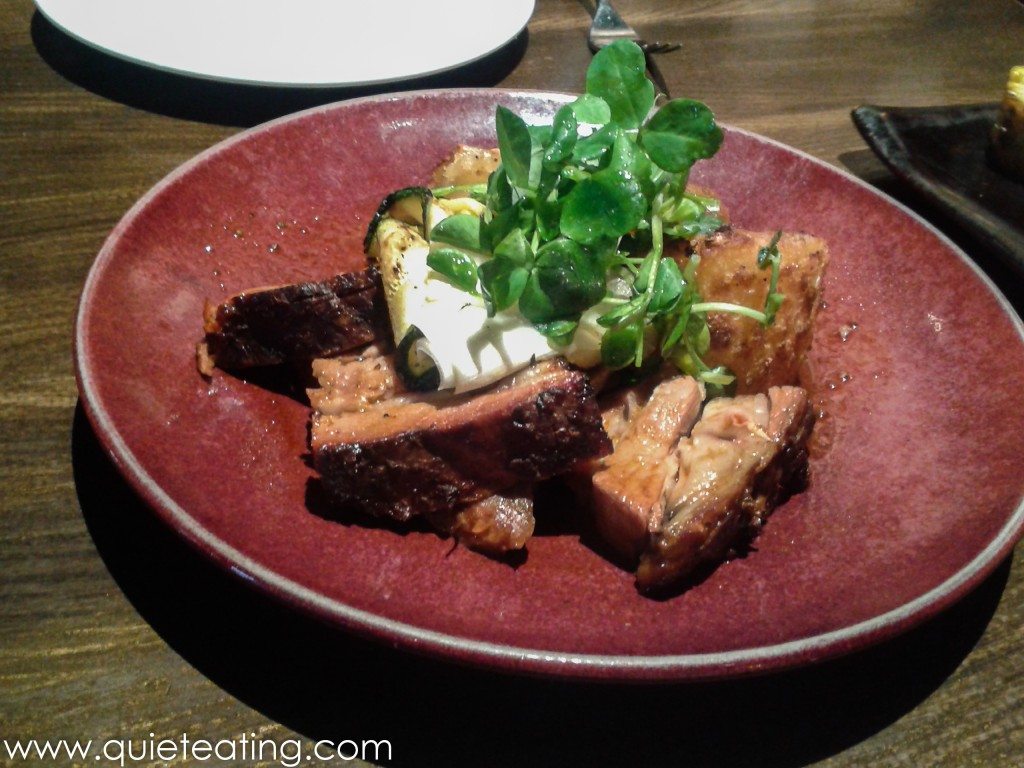 Roast lamb with potatoes and courgettes.  The lamb was fatty, moist and juicy, just the way I like it.  The potatoes were crispy on the outside and soft on the inside.  What more was there to ask? 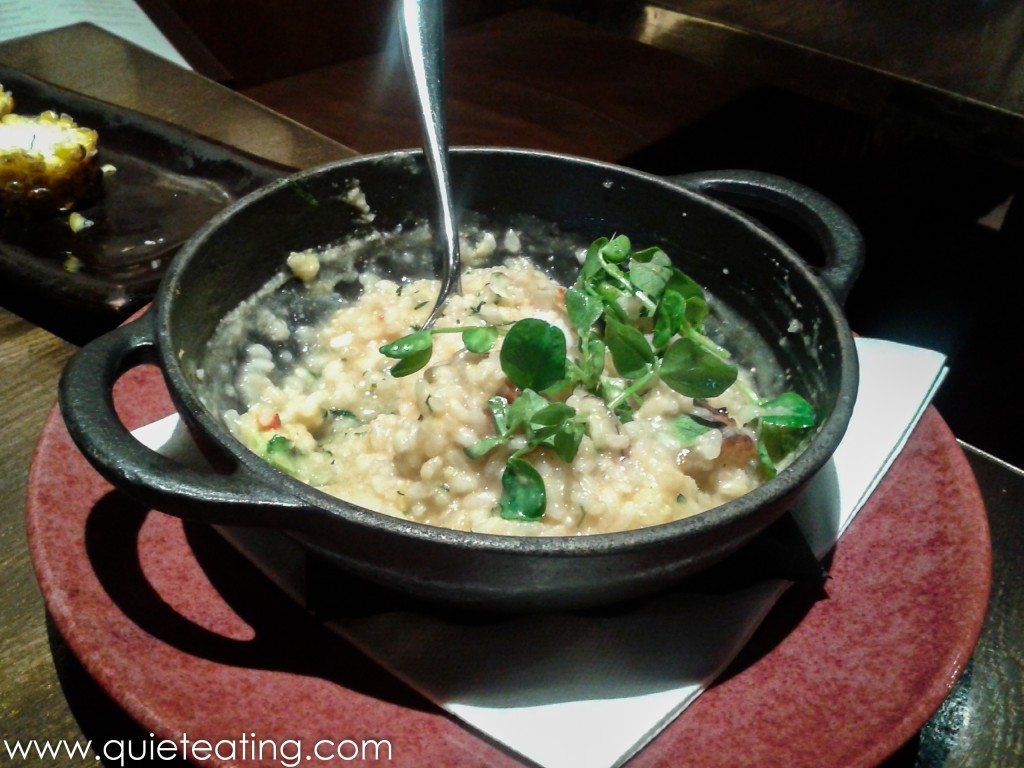 Seabass with risotto.  It looked very good.  It tasted ok, as it seemed to me that maybe the chef had a little accident and upended the salt shaker on it.  Maybe I am being a bit unfair here as my fellow diner didn’t find any issue with this. 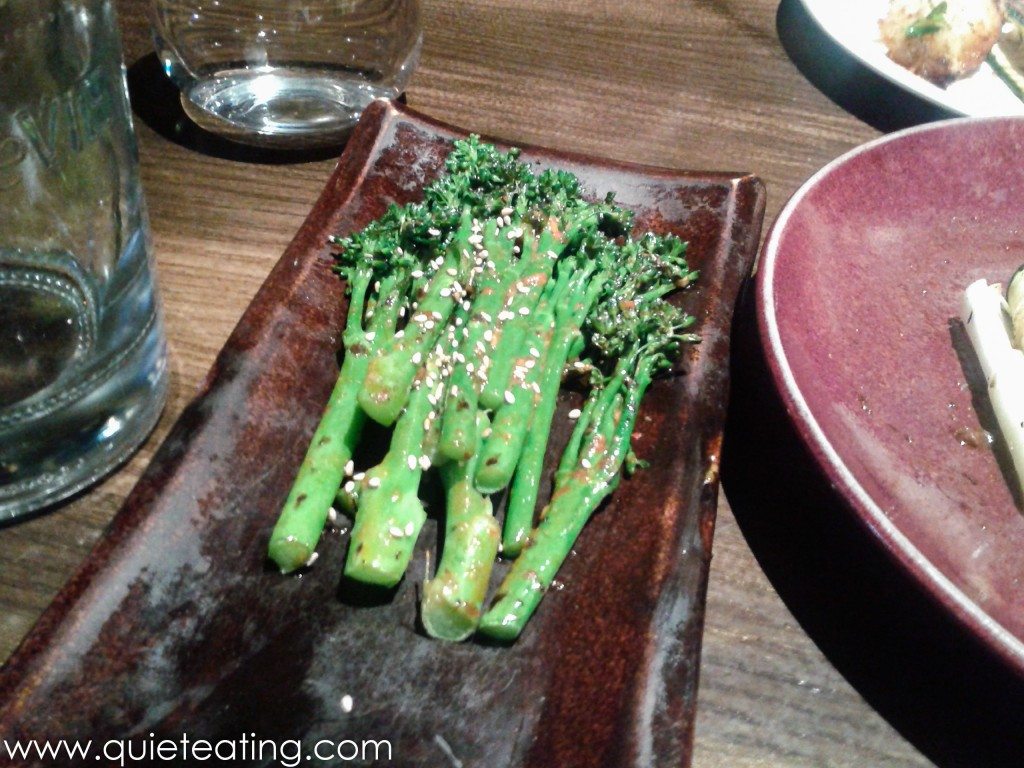 Sprouting broccoli with sesame sauce.  These were crunchy and healthy tasting, so not really to my liking.  You see, when I cook my own vegetables I tend to nuke my food til they become limp and easily squashed into the minimum size possible.  I explain my behaviour as maybe owing to the childhood trauma of repeated commands to “eat your greens”. 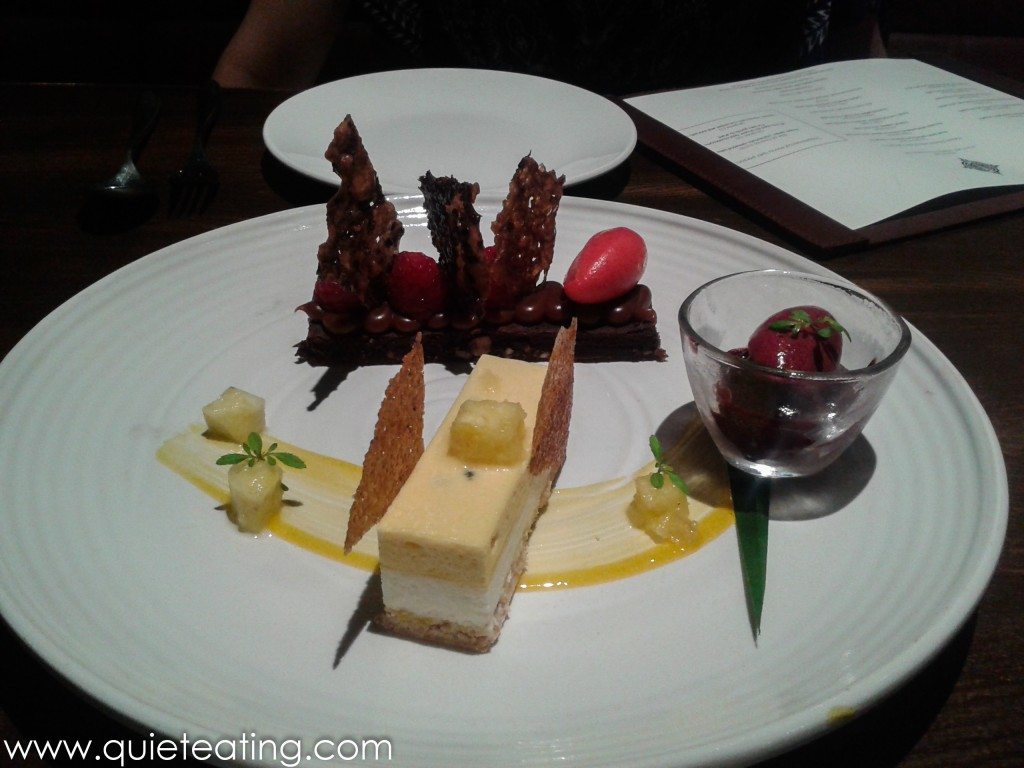 Lunch was an interesting twist and was overall done well with a few minor tastes which did not appeal to my elitist self.  It was an eye opening experience to try something I had not had before.  It also marked an end to my run of restaurant misfortune.  The service was decent and at least this time, was not overtly rude or inattentive.  And there were no surprises in the food which is a pleasant change for me.